So y’all voted for the letter N and The National Exemplar won. It’s such a big fancy name – I admit – I was a little intimidated. It’s in historic Mariemont – which is such a pretty neighborhood. Larry and I always joke that even in the dead of winter when our neighborhood hasn’t seen a plow in a month – places like Mariemont and Indian Hill still have daisies blooming and not a speck of snow on the road. Bastards! 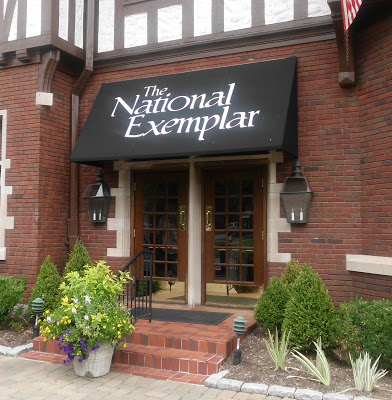 But aside from my bitterness, it is a great neighborhood and the restaurant is attached to the hotel on the square. We decided to go for a Sunday brunch rather than dinner for cost savings. 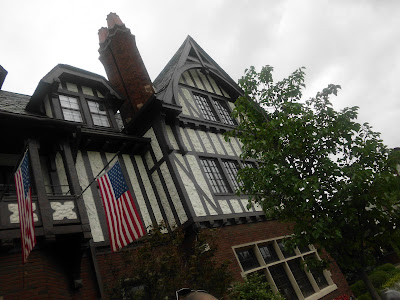 I love Tudor style. Every time I see a house like this – I say “I want one like that!” This is the hotel on the corner. 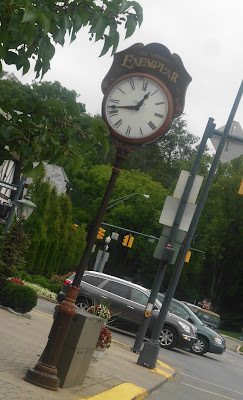 Even the clock is fancy. 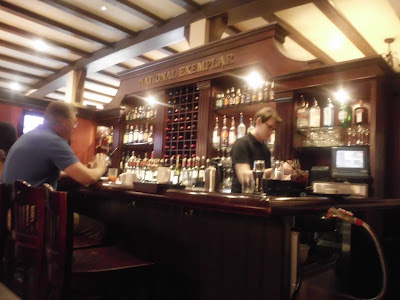 Here’s the bar – it’s original. And something else I didn’t know – this was actually the first First Watch. Our friend thought that was what he heard and the waiter confirmed it. Who knew?! 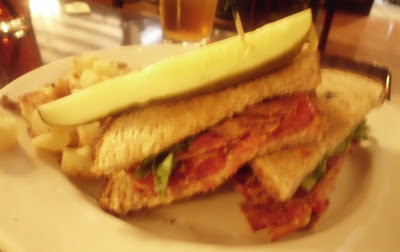 Sorry the pictures aren’t the best – my sister changed settings so I don’t have to use the flash – but sometimes the light is still low. Larry got the BLTE (sans E – $6.99) and said it was really good. 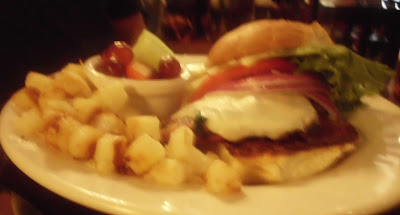 One of the guys got a burger I think…I feel bad – it’s been a week and I don’t remember. Sorry! 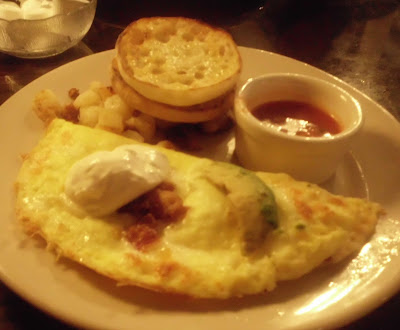 I got the Bacado omelette (bacon, avocado and melted monterey jack cheese, topped with sour cream. Served with a side of salsa. $7.99) It came with potatoes and an english muffin. It was okay. I really like omelettes and was really excited about it – but in the end – it didn’t have much flavor. I liked it okay and I ate it – but nothing too outstanding here. 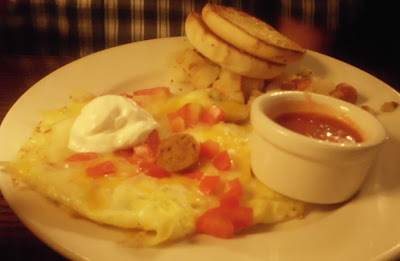 Our other friend got the Sonoran Fritatta ($6.99) – and that is just fun to say. We all decided we wanted to order fritattas just to say it over and over again – FREE-TATA. What a fun word! He liked his as well.

Why Should You Go? Well our friends really enjoyed it – Larry and I both thought it was fine. I think if we were in the neighborhood again – we’d likely try Dilly Cafe since we haven’t been there yet. Also – on a Sunday – it’s busy – fyi. We planned on meeting at 1pm but got there 15 minutes early – and there was a 15 minute wait. (good timing!) So if you’re going at a brunch-y time – plan ahead – they do NOT take reservations.

One more thing to note – while service was prompt – our server was a bit overzealous. He took everybody’s plates before they were really finished. Larry hadn’t even eaten his fruit yet and they snatched it away. It wasn’t like we’d been there for 2 hours chatting away and using up his table – we were in and out in an hour and there wasn’t a line waiting to be seated.