A couple weeks ago, my husband and I went on the Backroads Farm Tour through Campbell County. A former coworker is in the Neltner’s Farm family and had told me about it – so I was really excited to go! All the stops were FREE – all you paid for was food you bought. 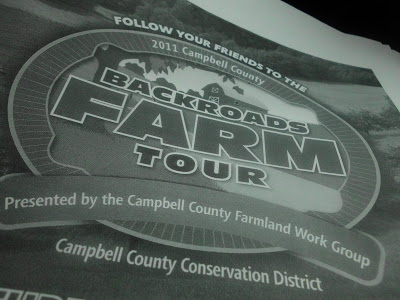 I never knew all the farms and locally-grown vendors that were right in our back yard! The tour is self-guided and had very good signage. The map was your guide and all of the addresses were GPS friendly (much appreciated). We just took off in the morning and drove from place to place. 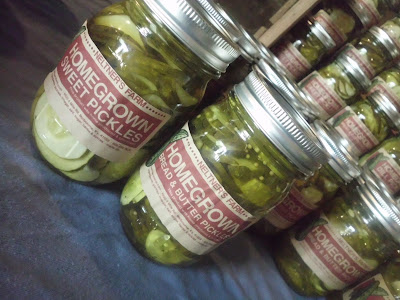 Many of the stops had goods for sale – at Neltner’s they had a variety of canned goods as well as produce. We picked up a tomato and some fresh (and delicious) peaches on our stop! 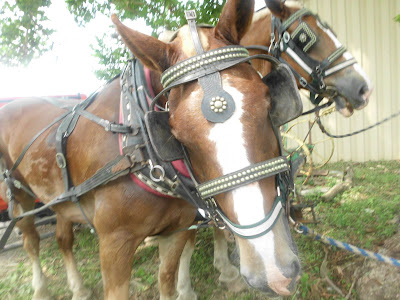 In addition to selling goods, many of the stops had tours around the farm as well as information you could get about what they do. We stopped to pet a LOT of horses this day! 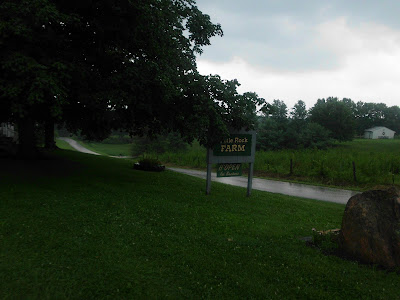 Next up was the Little Rock Farm – it was just down the road from Neltner’s. They had produce, meat and a grill going…

It also DOWNPOURED right as we pulled in – so we sat in the truck for a bit. We don’t get rain for a month and the one day we decide to do something outside – it rained! But it didn’t dampen any spirits – the traffic was buzzing on those country roads and we braved the rain with everybody else! 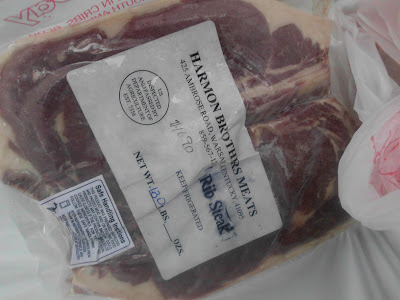 We also got some steak! The steak was pretty darned good – we took a cooler with us (as noted on the flyer) and then just let it thaw so we could have it for dinner that night. After sampling the burgers on the grill though – we should have picked up a few packs of those! They were the best tasting hamburgers on the tour! By. Far. 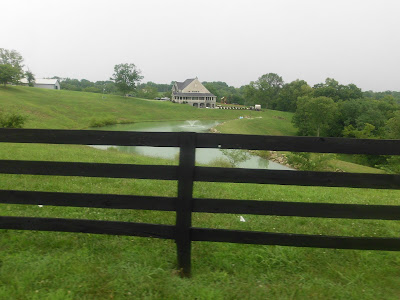 The countryside is so beautiful – and there were some AWESOME homes in the backroads to check out! 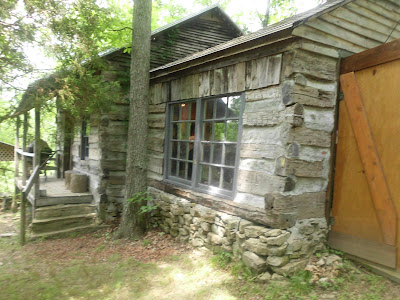 We also checked out the Campbell County Log Cabin Museum (um who knew?). They had this great old log cabin and once inside we read that a couple raised a family of 8 children in this place! Holy cow! 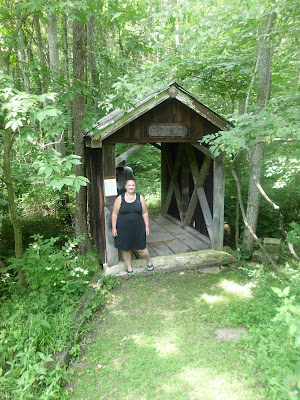 Larry snapped a shot of me in their covered bridge – which was really small! We were wondering why it was ever built – since it appeared to go nowhere. 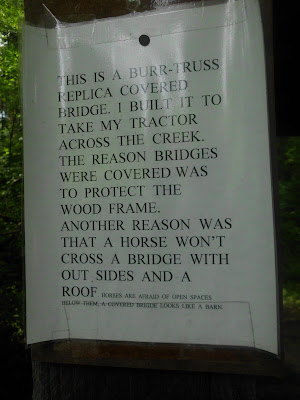 And then we found out! 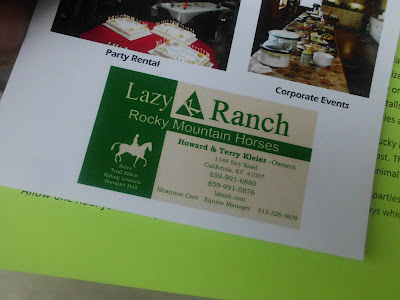 After that we headed to the Lazy K Ranch – I loved this visit!!! They have a huge horse ring and are available for riding lessons as well as private events. 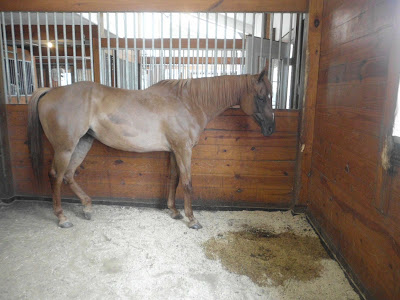 But who am I kidding – it was all about the ponies!!!! 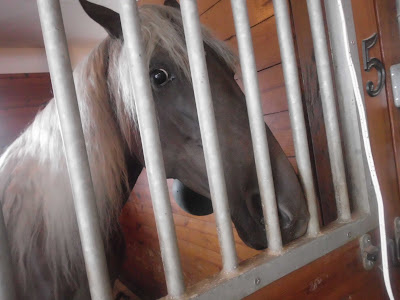 They were so sweet and so friendly. I probably petted 10 horses! 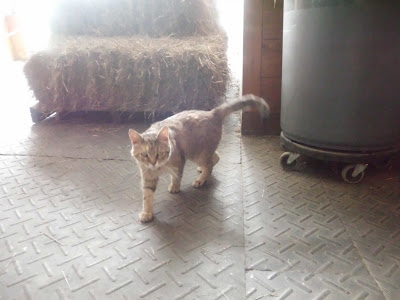 And of course – they had a barn cat! This is the life for a kitty… 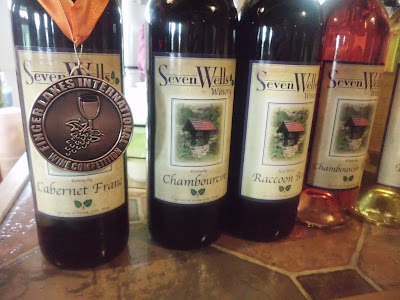 Next up was the Seven Wells Winery – I’m not much of a wine person but we decided since there were quite a few wine stops – we should go to one at least. They had wine tastings but were kind enough to give me a taste of one of their white wines and a blush. For wines sake – they were pretty good. I liked the white they had very much. 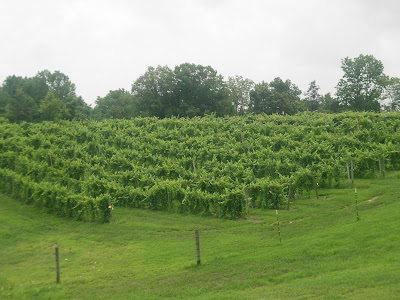 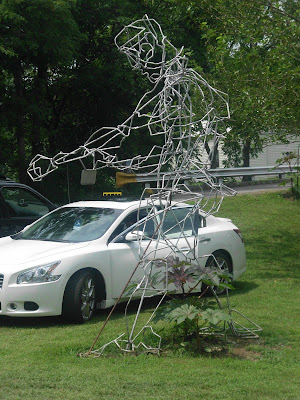 There was also a honey stop at Beezy Bee with this really interesting sculpture in the front yard. It’s either a golfer or a baseball player – I can’t remember. There was a picture inside of it with clothes on so you could see that easier. 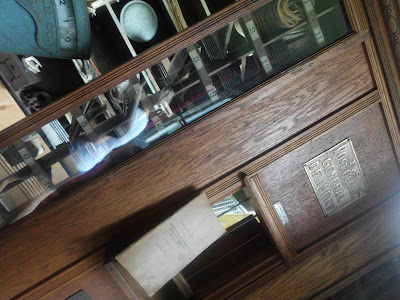 Beezy Bee also has a real General Store on the property – with lots of old things inside. I have always been fascinated by General Stores! No idea why – but I would have loved to live in those “Little House on the Prairie” days (or so I think). 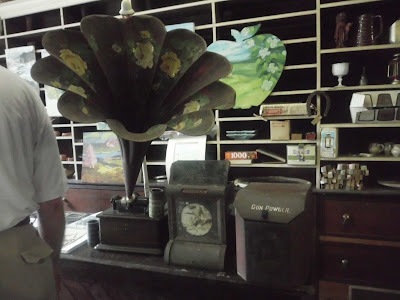 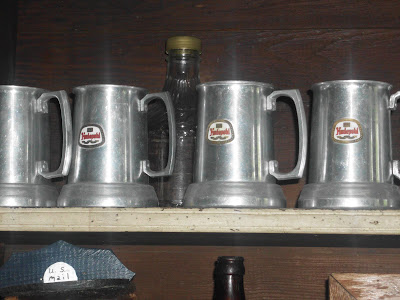 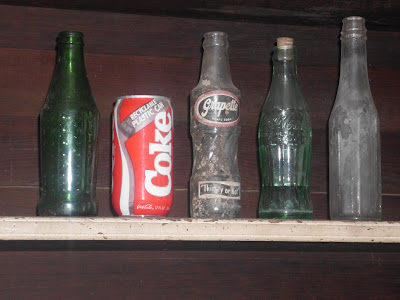 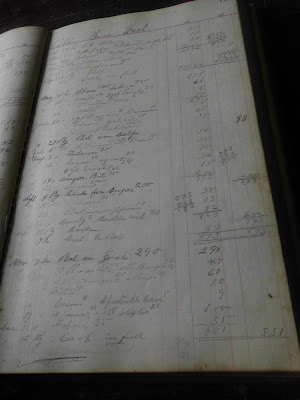 This was the most fun part of the visit – reading the old ledgers. Each page was a different townsperson’s transactions – seeing a glimpse into their life of coming in and buying sugar for a quarter. 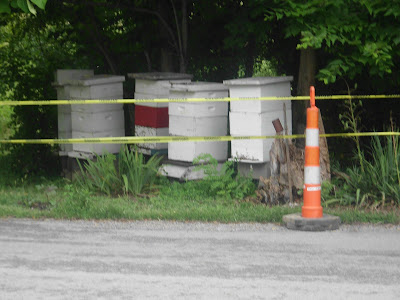 And the bees – thank goodness they were across the street! I’m terrified of bees since I’ve never been stung in 38 years!!! 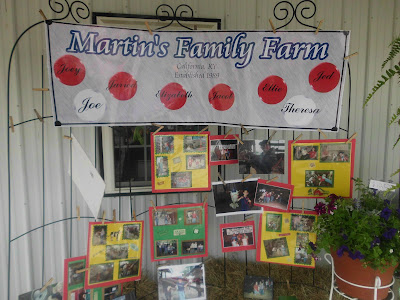 Our last stop was the Martin Family Farm – unfortunately they didn’t really have any produce for sale – it was more baked goods and burgers – things that had to be consumed right away. 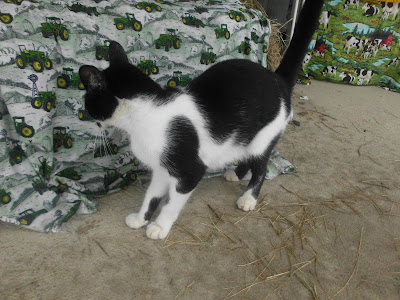 They did have an adorable little farm kitty ready to greet us! 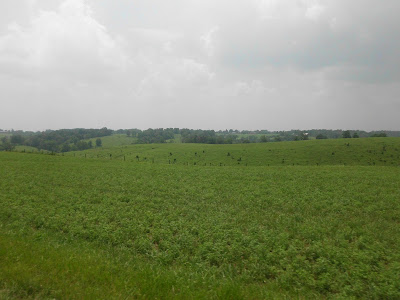 All in all – it was a great day! We’ll plan ahead better next year and buy produce at Neltner and Little Rock and then venture to the others for the animals and the views.
Why Should You Go? I really enjoy finding free events like this in the tri-state. It gives you a chance to see things you never knew were just a few minutes away. It’s a road trip in your own city!
Previous Post: « Heart Attack on a Plate (and the last day of Iowa week)
Next Post: The Other Chili Place »