That is the one great thing about the work Christmas Party – free food – and it was someplace I have never been before – so I got to review it! There was no drunken debauchery at this party like previous companies I’ve worked for (those were the days!) but a good time was had by all.

We were treated to John Phillips, a locally-owned restaurant in Crestview Hills Mall in NKY. I guess I don’t know for sure it’s locally-owned but it’s not a chain – w00t! 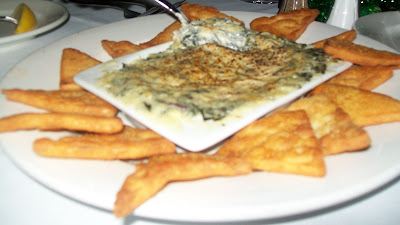 A few appetizers were passed around – Spinach Artichoke Dip for starters ($6.95) with pita chips. I thought this was really good – but it’s warm and creamy and cheesy – so of course I did. 🙂 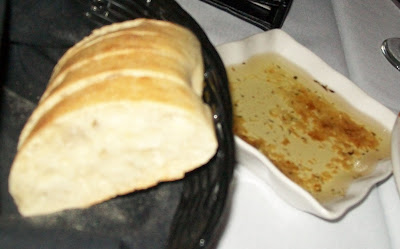 They brought out bread and olive oil as well – my apologies for some of the pictures. Always tough to figure out what settings for dimly lit restaurants. The bread was good as well – I think Larry ate most of it at our table and normally he’s not a bread guy. Nothing out of the ordinary here – but nice. 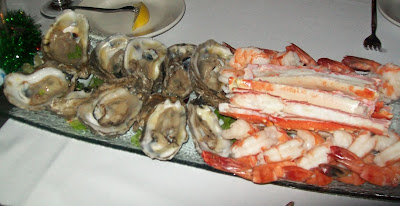 They also had a couple of the Market Fresh Seafood platters with Colossal Shrimp, Alaskan King Crab Legs & Oysters (Market Price so I have no idea). I was brave enough to eat an oyster – mostly because Larry thought it was gross. It was fine as far as oysters go. Shrimp were very large and good as far as shrimp goes. (Trend developing…) The crab was okay – but not very sweet. I got spoiled by having something like this at Jeff Ruby’s Waterfront. I didn’t enjoy my experience there EXCEPT for the seafood app – it was amazing. This was just fine. 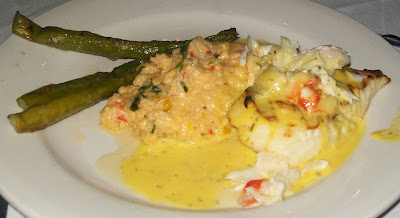 Larry and I each got the Halibut special that they offered. It was topped with crab and a hollandaise sauce. The sides were risotto and asparagus.

I feel guilty saying this because it was free and it was my boss’ choice for a restaurant – but me no likey. The fish was overcooked, the sauce didn’t have much real flavor but did help. The risotto just wasn’t very good – it was okay – like most everything else. It tasted more like the cheesy rice that Rice-a-Roni makes than something to come from this quality of a restaurant. The asparagus – yeah – even that wasn’t so good. the ends were really tough and sinewy (I know – fancy word for me to use). They didn’t break off the ends like you should with asparagus. Based on the other seafood prices on their menu – I’m guessing this was in the $25 range – and it just wasn’t that good. I kinda felt bad for Larry –  he ordered the same thing but couldn’t have the sauce so his fish was all alone.

Another coworker got sushi and a seaweed salad (blech!). It’s a pretty basic roll but they were happy with it.

Here’s more of their sushi…not sure I’d pick this place to order sushi since we have so many great ones in my area of OH. But again – they seemed to like it. 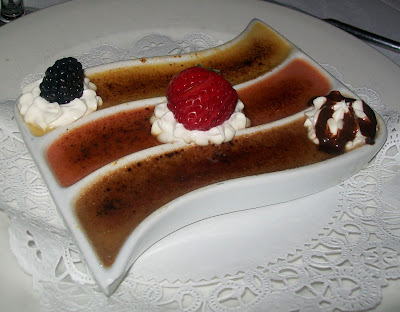 I decided to splurge on dessert because they mentioned one of my favorites – Creme Brulee! Another disappointment I’m sorry to say. First the “homemade whipped cream” – I swear it was cream cheese and they grabbed the wrong squirty thing in the back. I’ve NEVER tasted whipped cream like this – I mean – it was not good – thick and pungent. (I like cream cheese – but not when I’m expecting whipped cream.) The brulees were in 3 flavors – neopolitan – and they just all were bad. They’d been sitting for a while because the crusty sugar top (the best part is cracking that) wasn’t crusty. It was settled in and just like sugar on top – no crack. 🙁 The flavors were okay – but they were just okay. I didn’t like the texture either – it was too thick – I like the really creamy creamy brulee.

Also – gotta mention service for John Phillips. The wait staff did a great job – you could tell they wanted to be great servers. They were very attentive and yet not at the same time. They came around a lot and checked on everybody – but then didn’t follow up when asked. (We asked about eggs in something, they never came back – it happened to others as well.) Also – we didn’t experience this but the other end of the table did – they seemed to be out of a lot of things. They were out of something for dinner – then at dessert they bragged up this one pie so a ton of people ordered it. Then the waiter returned to say “oops – we’re out of that”. This was a Tuesday night – at like 8pm – and they’re out of stuff?

Why Should You Go? Meh – I likely won’t be back. I didn’t enjoy my meal and it’s pricey. But I have to say – if you’re in the area – I bet it’s good for lunch. The prices are much more reasonable ($6-$12) and it is a nice atmosphere. So for a somewhat fancy  lunch – it would be a good stop.I would compare John Phillips to Jags. If you love Jags – you’d likely love this. To me, it’s a little boring.

(Hoping my boss skips this blog entry…I don’t think he reads my blog anymore anyway. Don’t fire me because I didn’t like it. He’s already said we have very different tastes – haha.)