So my sister has come home to roost for a few weeks while she’s awaiting her return to the world of academia. While she’s here – she’s becoming quite the chef! She’s sort of taken to making dinner in return for living here – I’ll take that.
So I handed her the July issue of Cooking Light and told her to git ‘ta cookin! 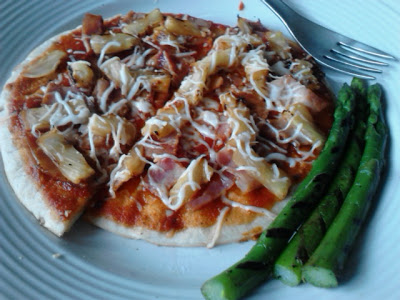 Grilled Ham & Pineapple Pizza
Larry is a big fan of ham/pineapple pizza so this was first up. I have to say it was AWESOME!
She even used less cheese than the recipe called for. We did use FRESH pineapple which I think helped but Meijer didn’t carry Boars Head ham – so I bought the packaged John Morrell Off the Bone Smoked Ham. We also used the store-brand small premade pizza crust (like Boboli). 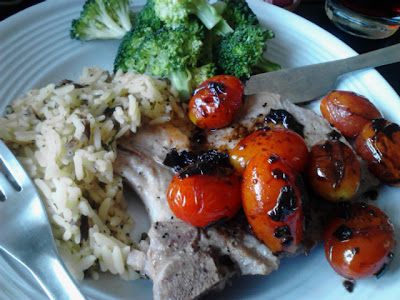 Pork & Tomato Skillet Saute
We picked up some bone-in pork chops on sale and found this recipe and she made that tonight. I have to say – this was also delicious!!!! She’s really good about making side items and having enough vegetables and such – which I’m not.
For this we had steamed broccoli and the grilled tomatoes on top. There was a balsamic glaze on the chops and it was sooo rich and good. I forget how much I love balsamic vinegar in cooking.
So thanks to Cooking Light for these delicious recipes and thanks to my sis for being around to cook for us!
Pin
Share
Tweet
Share
Previous Post: « Product Review: Taco Bell’s New Cantina Bowl
Next Post: Frozen Lunch Review: Ranchero Braised Beef »