The letter E was a bit of slim pickins – I’m trying to go to places I haven’t been so some of the E places were out and it left me with El Pueblo and El Coyote. El Coyote in Anderson won by a landslide. It’s got sort of a cult following – people that love it LOVE IT! It’s a Tex-Mex restaurant but I think might be even more known for its steak.

It’s also a very busy place – I went with my friend Lou on a Wednesday at 530pm and the parking lot was bustling! It’s dark inside and cozy. They used to have locations in NKY and West Chester, but now it’s solely the Anderson spot. 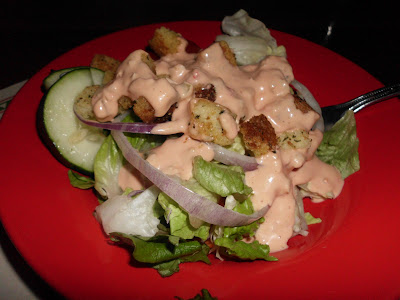 I started with a salad and it was fine – nothing too special but not bad. The croutons and dressing were made in-house – which is a nice touch. I also liked that they had more than iceberg lettuce in the salad. 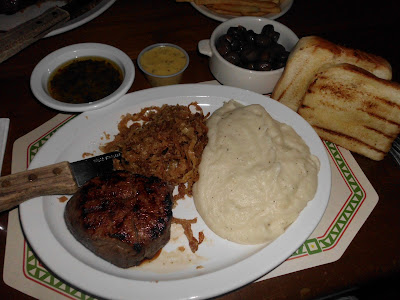 I was told by former coworkers that you don’t even look at the menu – you get the Filet. No questions – no decisions – that’s it. I ordered the 8 oz ($24.99). I was also told to get the side of cilantro butter and a side of Bearnaise. With the steak you also get a side salad, Texas toast, onion straws and a side. I went with the mashed potatoes. Lou ordered the mushrooms as a side but really to give them to me.

The steak (ordered medium rare) was cooked perfectly! It really was delicious. The onion straws were greasy. The mashed potatoes were good although it was a huge portion. The toast was dry. The mushrooms were okay – but oily. The cilantro butter is spicy. The Bearnaise was fine but I realized I’m not a fan.

I polished the steak and much of the potatoes. I really enjoyed it – for about a half an hour. For some reason it didn’t sit well in my stomach. Lou actually had the same thing happen about a half hour later. The only commonality we had was the steak but the whole meal was a bit greasy – so maybe that was it. 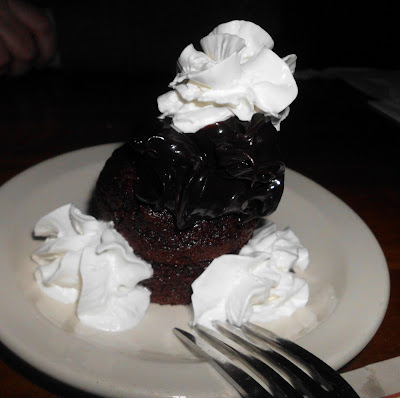 El Coyote does offer mini-desserts – which is nice. They’re all about $3 and a nice tiny portion. We went with the Chocolate Lava Cake. We decided to split it and it was pretty good – not fantastic – but pretty good.


Why Should You Go? Well I haven’t heard great things about the “Mex” portion of their menu but the “Tex” side is good. The steak was really great – everything else was just okay. It’s a neighborhood favorite so it’s worth a try. Although with the after-effects – I’m not sure I’ll go back for a while. 😉