Everybody in Cincinnati has their favorite – what’s yours? Gold Star or Skyline? I have to admit – I’m more in the Skyline camp but the boyfriend likes Gold Star…so sometimes you have to compromise… 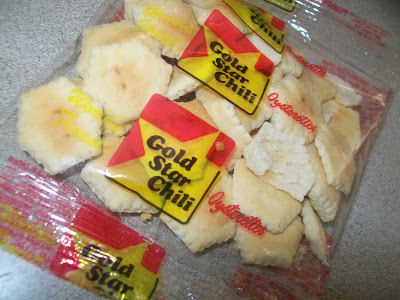 Prepackaged vs. served in a bowl…ah I do love the bowl. But prepackaged and I don’t eat them! Better for the caloric intake (cuz that matters???).

I’m typically more of a coney girl than a 3-way girl (that’s what she said) and since I’m not as much a fan of Gold Star I decided to be different and get a chicken burrito – why not? 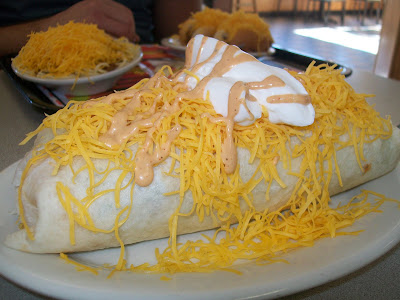 Holy hell – that thing was GIANT! I didn’t really realize that the “topper” was an extra charge until after I’d said yes – but what the hell.

I should have taken a picture of the inside – so much stuff! It was a lot of lettuce – I’ll admit that…and the sour cream on top did wonders for it. The chicken was very juicy and tender so that was good. Kinda would have liked a little chili thrown in for good measure – think I’ll ask for that next time.

This burrito is huge but it was very tasty and if you’re not in the mood for the traditional offerings – it’s a nice variety. Or if you get dragged to a Cinci chili restaurant and you hate it (ala my sister) then you have something you can order!

It is akin to a Chipotle burrito but not NEAR as good – but better than a Taco Bell burrito. How’s that for comparisons?