Recently I was invited to have dinner with a friend at Bonefish Grill in Hyde Park to try their special Dinner for Two menu! I’m excited to not only share my thoughts with you – but also one of you will get to have your own dinner for two thanks to Bonefish Grill! 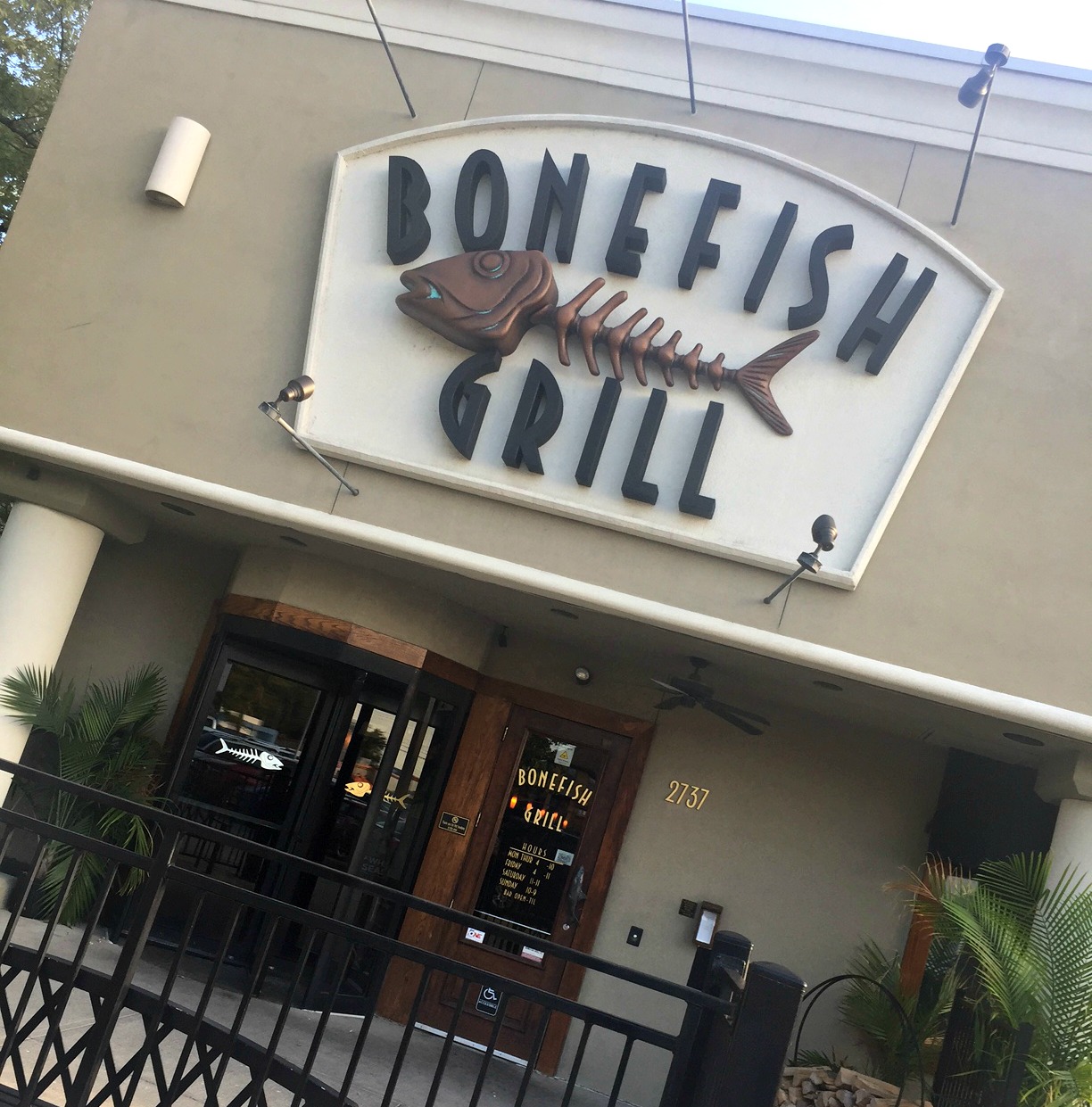 Bonefish Grill has three locations in the Cincinnati area: Rookwood, West Chester and Crescent Springs KY. We chose the Rookwood location which is across from the full Rookwood Plaza in a strip mall. 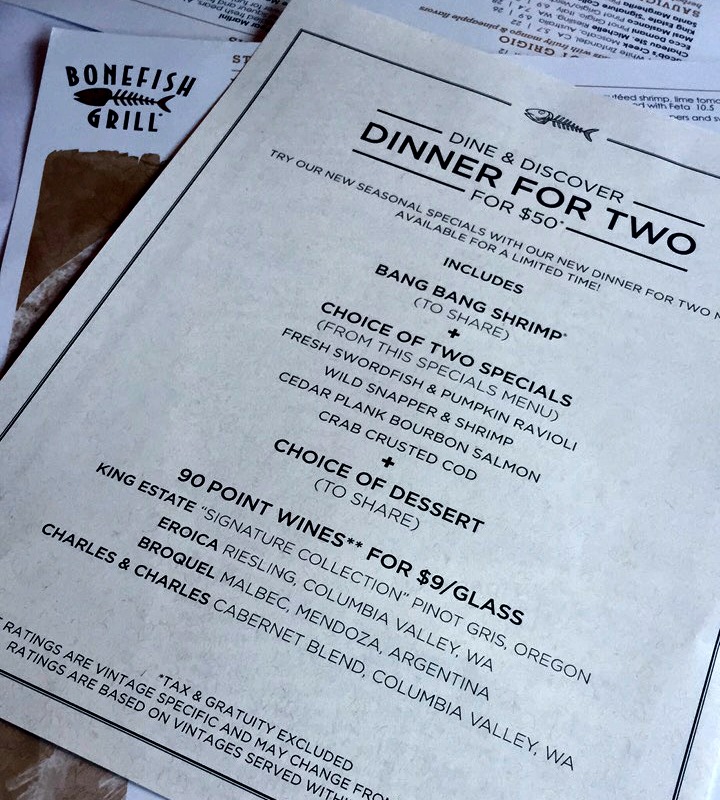 We were asked to try the Dinner for Two for $50 menu – which sounded delicious – so we were definitely up for it! This menu is only available through the end of the month – so hurry and get there this week to try it out!

The dinner for two starts with a Bang Bang Shrimp to share – then you choose two entrees and share a dessert. The entrees you can choose from are Fresh Swordfish + Pumpkin Ravioli, Wild Snapper + Shrimp, Cedar Plank Bourbon Salmon and Crab Crusted Cod.

In addition they have some wine specials for $9/glass. 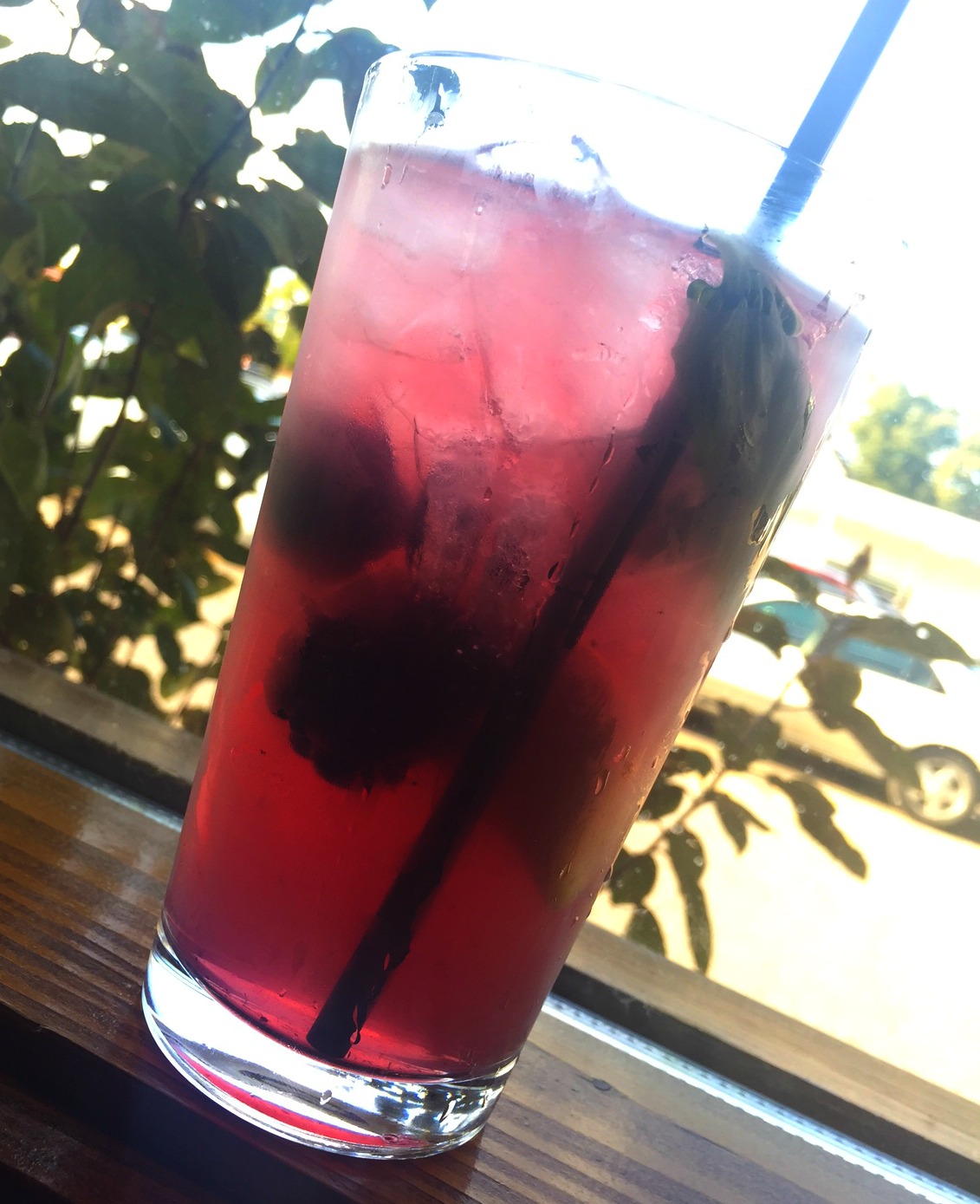 I got some fun fruity non-alcoholic drink – I think it was a Blackberry Smash or something – it was pretty and tasty! 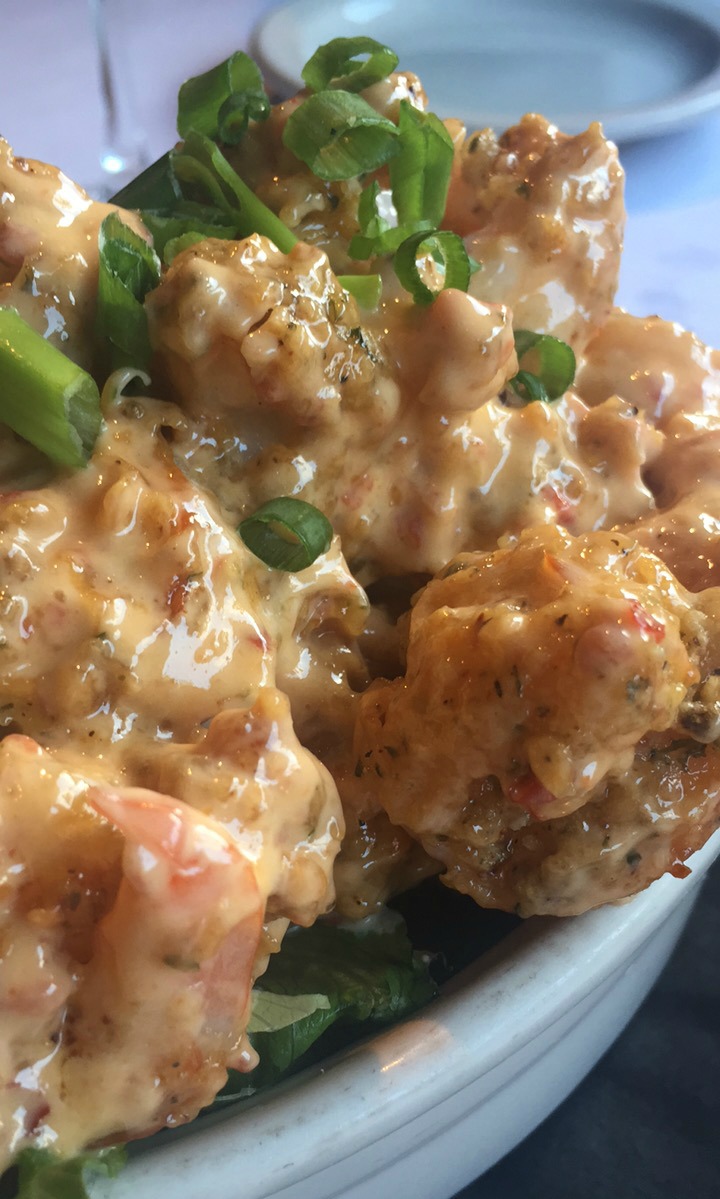 Then – there’s the Bang Bang Shrimp. If you’ve never been to Bonefish – it’s is their signature dish and you MUST order it. It’s fried shrimp with a spicy chili mayo dressing served on a bed of lettuce. 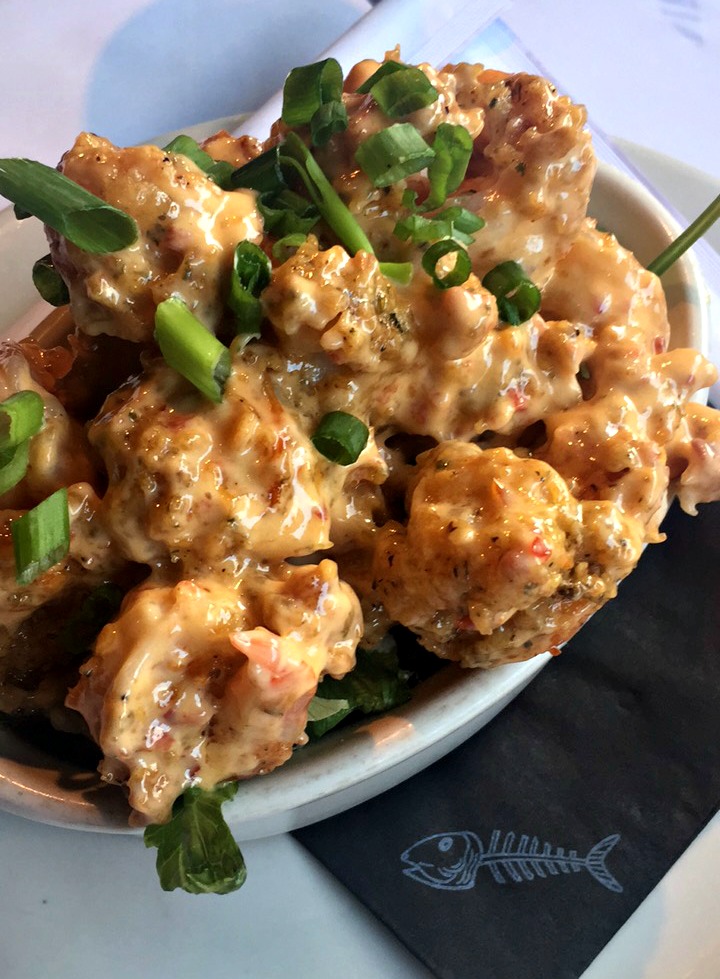 It’s so good – it’s the freshness of the shrimp, the spiciness of the chili sauce and the cool lettuce. It ends up being a salad underneath and is really my favorite dish at Bonefish. Again – if you haven’t been – it’s worth going just for this dish! 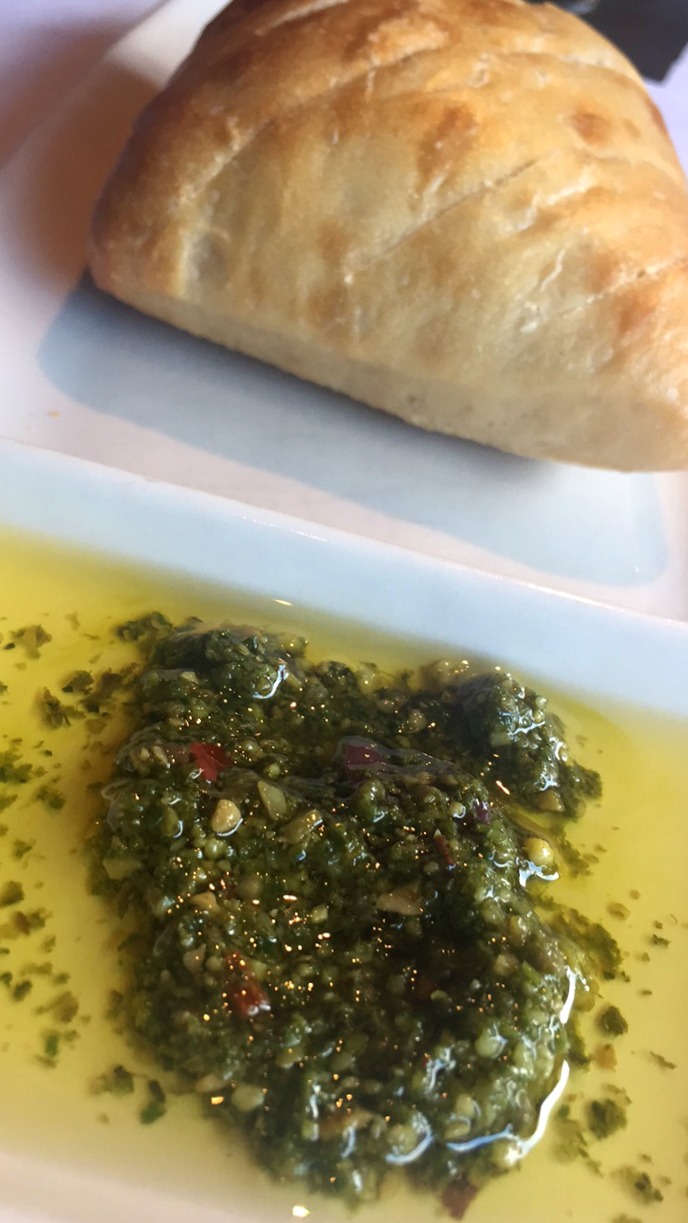 We also started with a fresh warm loaf of bread served with oil and pesto – delicious. You could have a meal of bread, oil and Bang Bang! The bread is really good and warm! 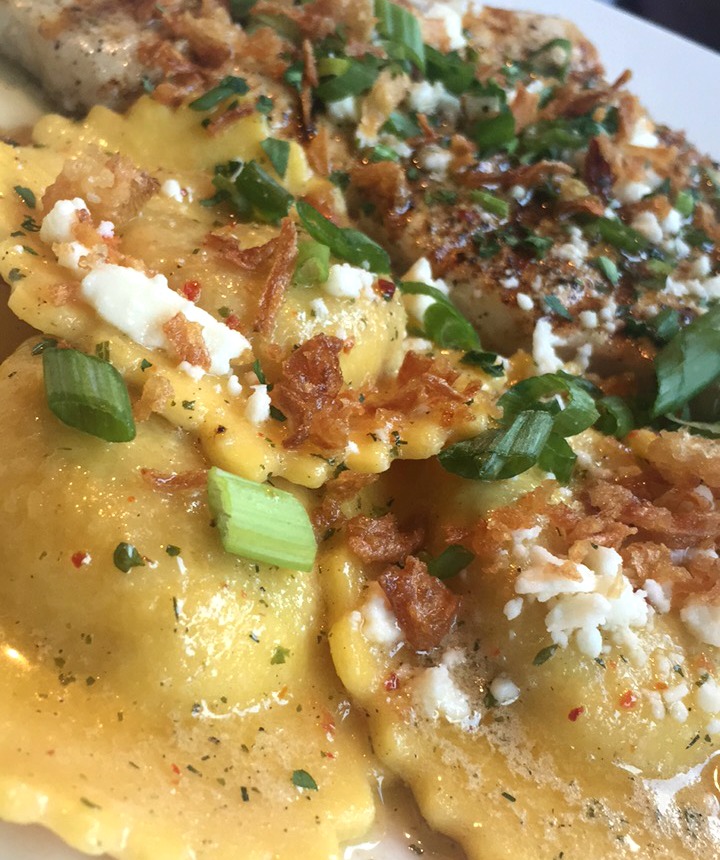 Danielle got the Swordfish + Pumpkin Ravioli – I’m not a fan of Pumpkin Ravioli typically but this was pretty good. She liked it as well. She also killed so much of the shrimp that she had leftovers to take home. 🙂 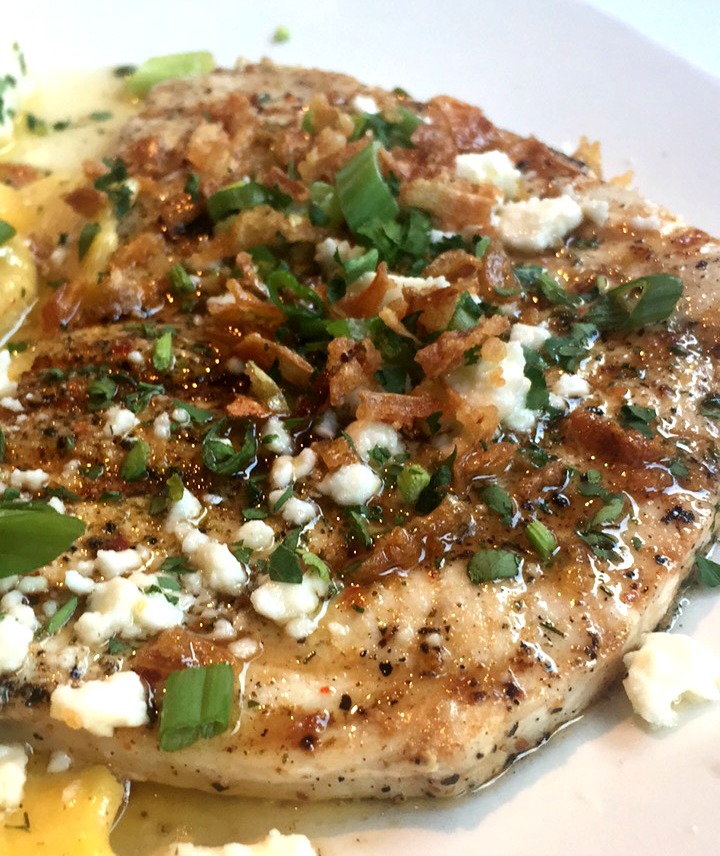 She also enjoyed the swordfish – it’s a very hearty fish but also light. It’s got the texture of tuna but it’s still a nice light white fish. 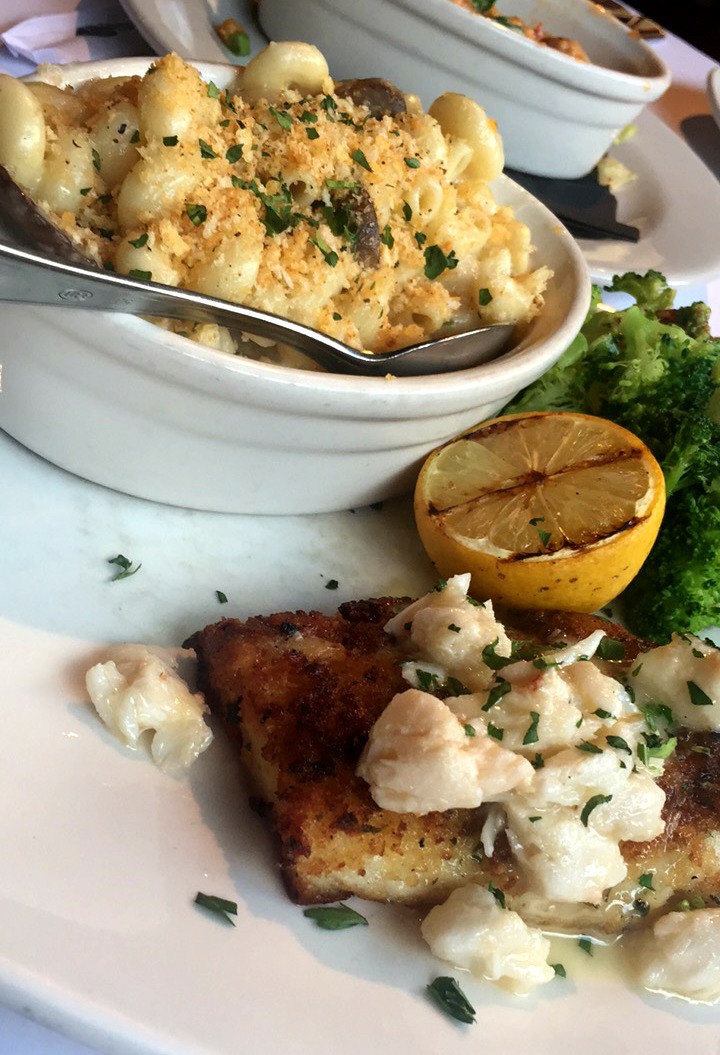 I knew immediately I was going for the Crab Crusted Cod – I love crab and cod – so easy choice for me. I got a side of broccoli and then added on the truffle macaroni & cheese with mushrooms. 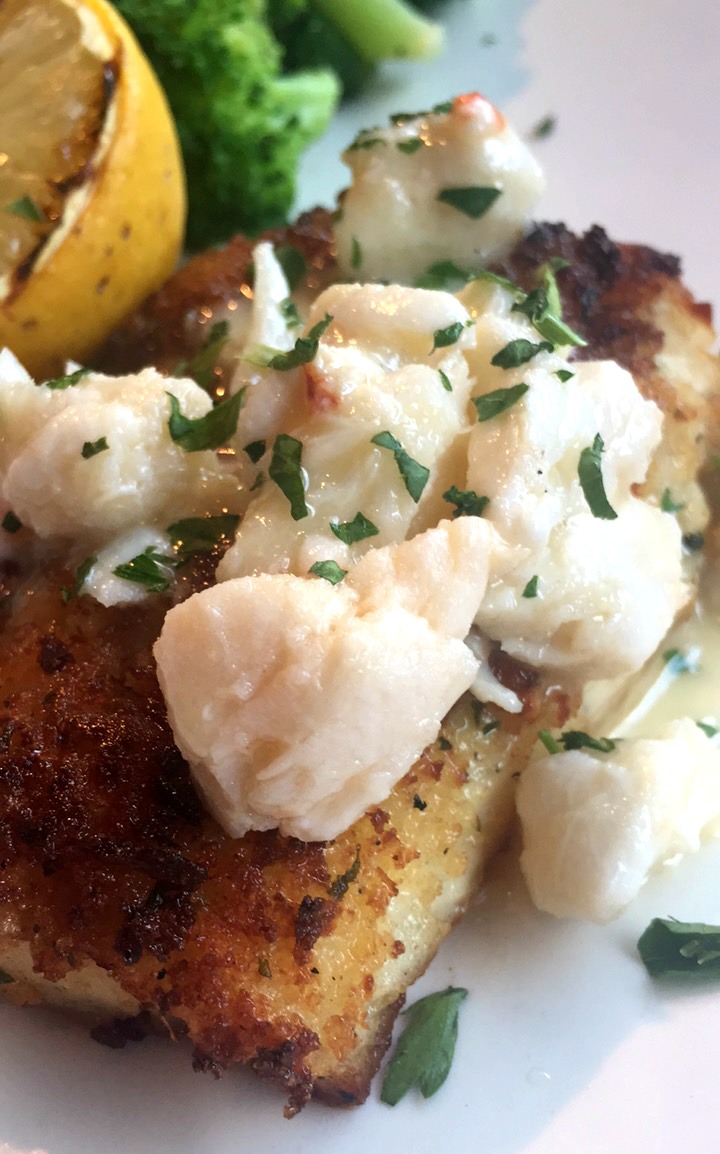 The crab crusted cod was really good – the cod was fried but still very light and crunchy. The crab was big sweet chunks of crab and was delicious! I love crab so I’ll always go for that on a menu! 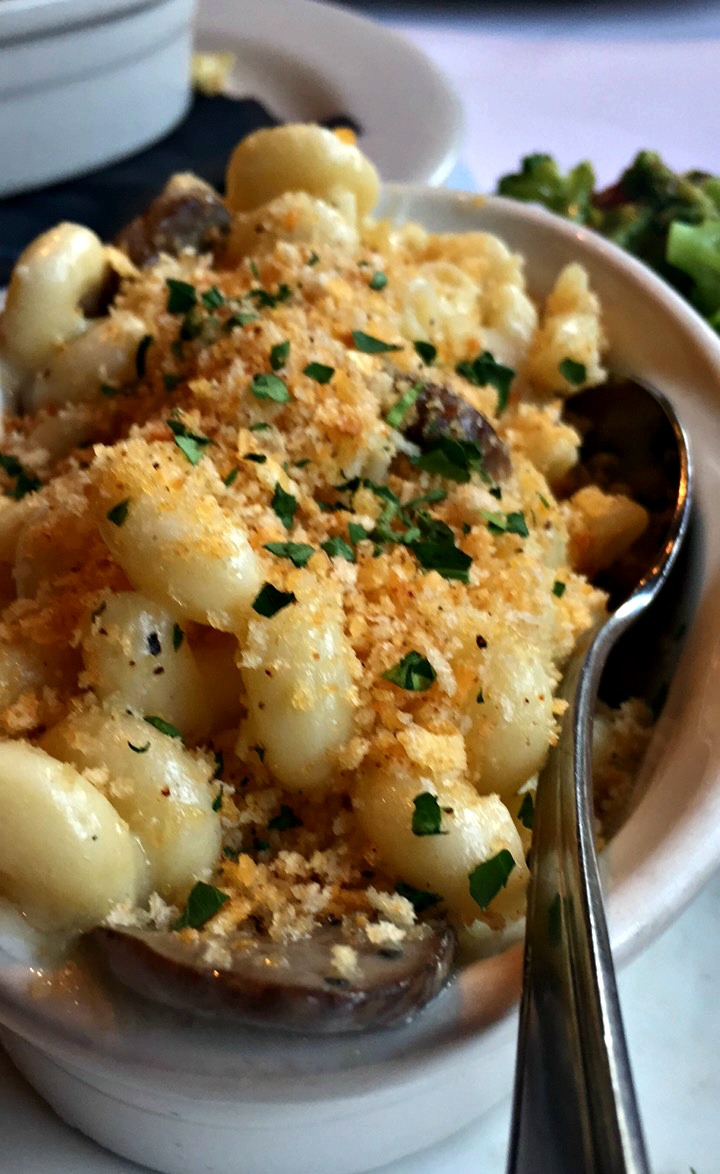 I’m not a fan of anything “truffle” because it’s typically truffle oil which I abhor. The smell is just too pungent and I don’t like the flavor. This didn’t smell or taste too strongly even though it was in there. I liked the corkscrew noodles and big chunks of mushrooms. It was pretty good but a little rich for me to eat the whole thing. 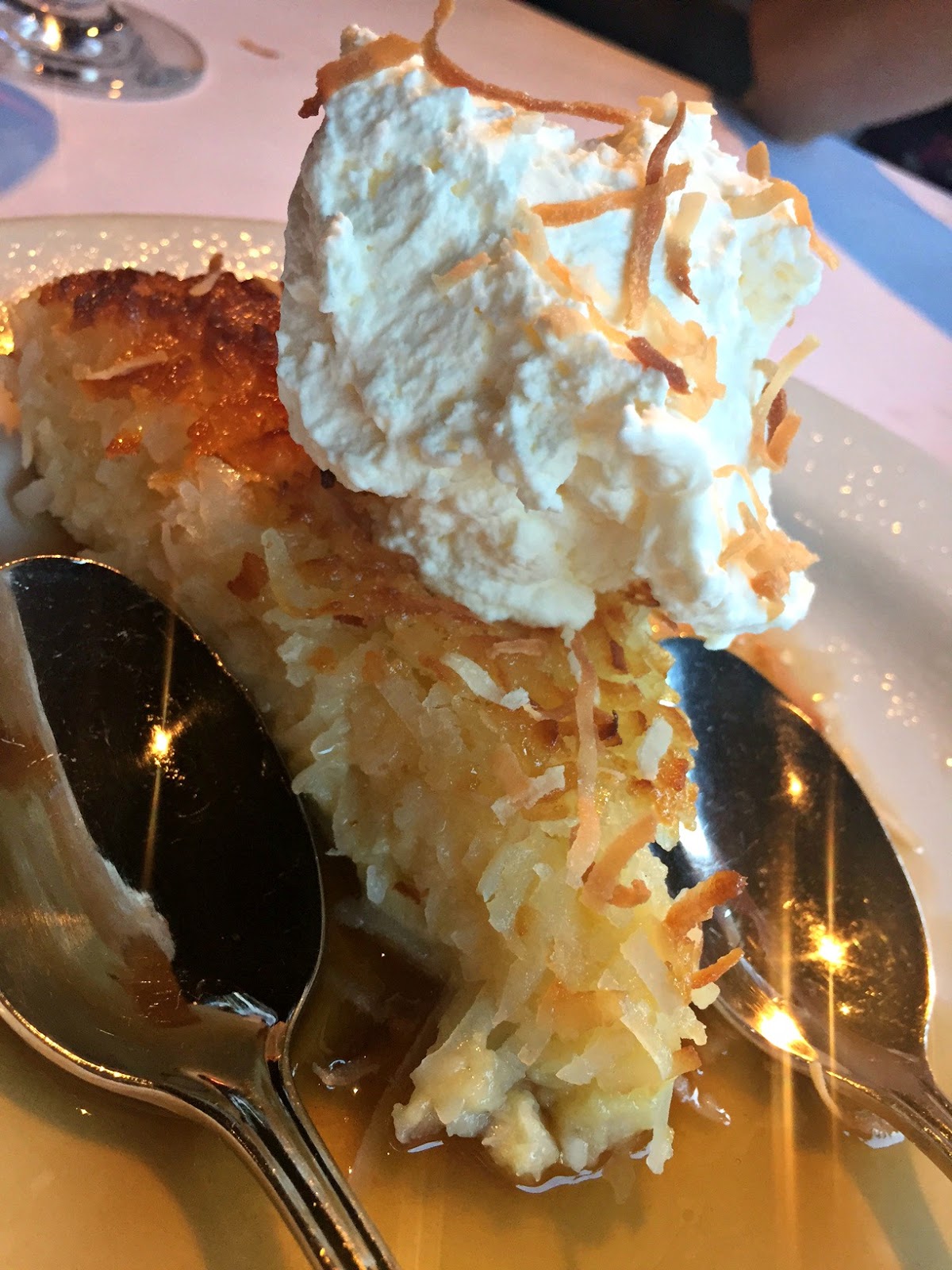 For the dessert, we decided to try Jen’s Jamaican Coconut Pie which was a creamy coconut custard with Myers’s Rum sauce and fresh whipped cream. I am a coconut lover – and you really need to be if you have this dessert. It’s not a coconut cream pie – it’s a very thick coconut pie with a little custard in there and the rum sauce is definitely RUM sauce.

Why Should You Go? It was a great dinner and the 2 for $50 is a great deal – especially when you start with Bang Bang Shrimp and then have two delicious seafood courses! It’s good through the end of the month so be sure to get there!

Then tell me below which of the entrees you would like to try and you might win $50 for yourself! (Crab crusted cod, swordfish + pumpkin ravioli, bourbon salmon or snapper + shrimp)