I’ve done a few posts for Kroger which have allowed me to share some delicious recipes with you – like the Triple Berry Cobbler and the Praline Caramel Corn! 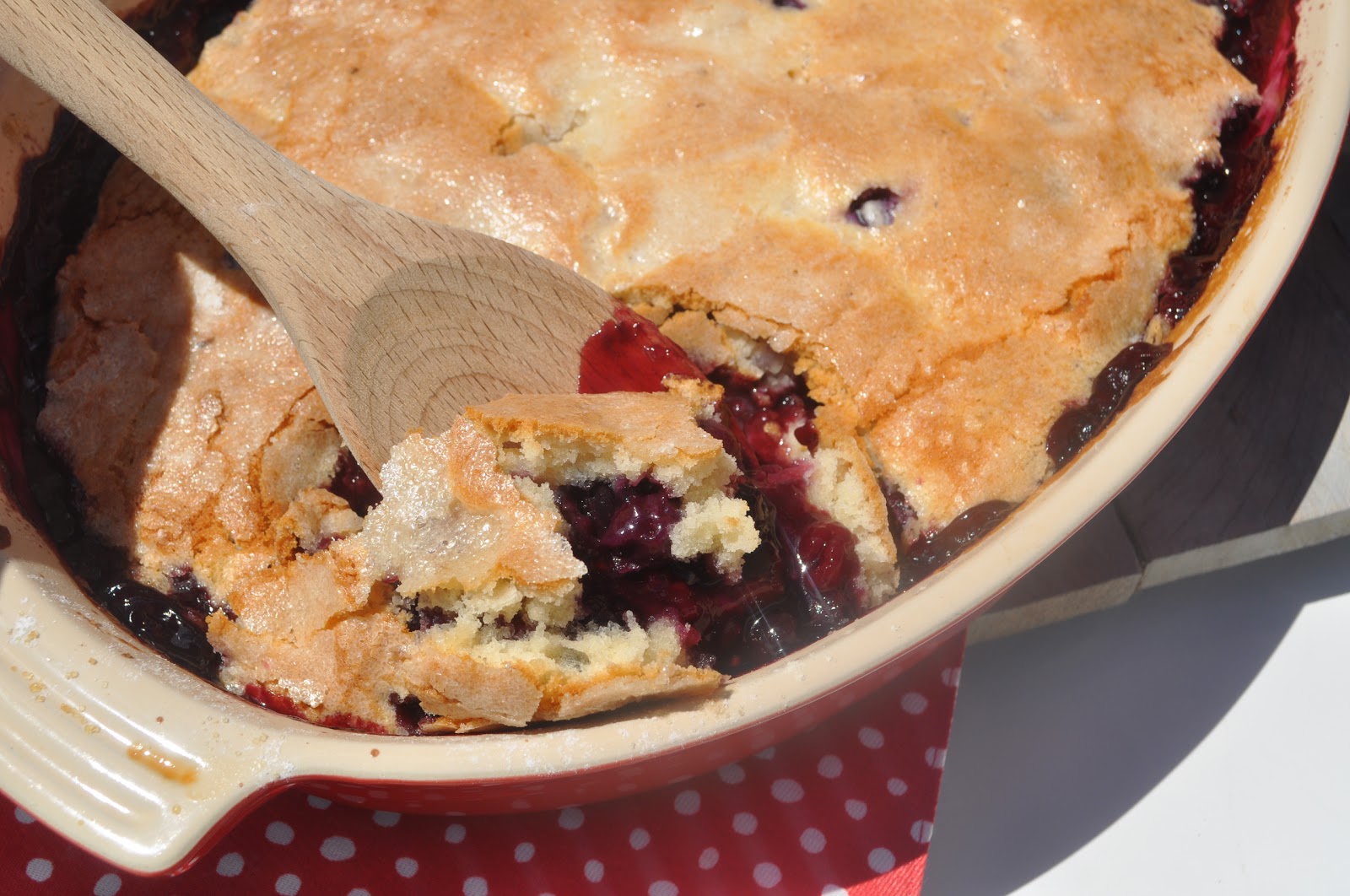 These are definitely two of my favorites – especially the cobbler – it’s my mom’s recipe and I always love making it – especially with new fruit options! So all of this is pretty normal when it comes to my Kroger posts.
A few weeks ago they decided to treat me to something special and WOW – it was amazing! I wasn’t even asked to blog about it – but I had to!!!!! 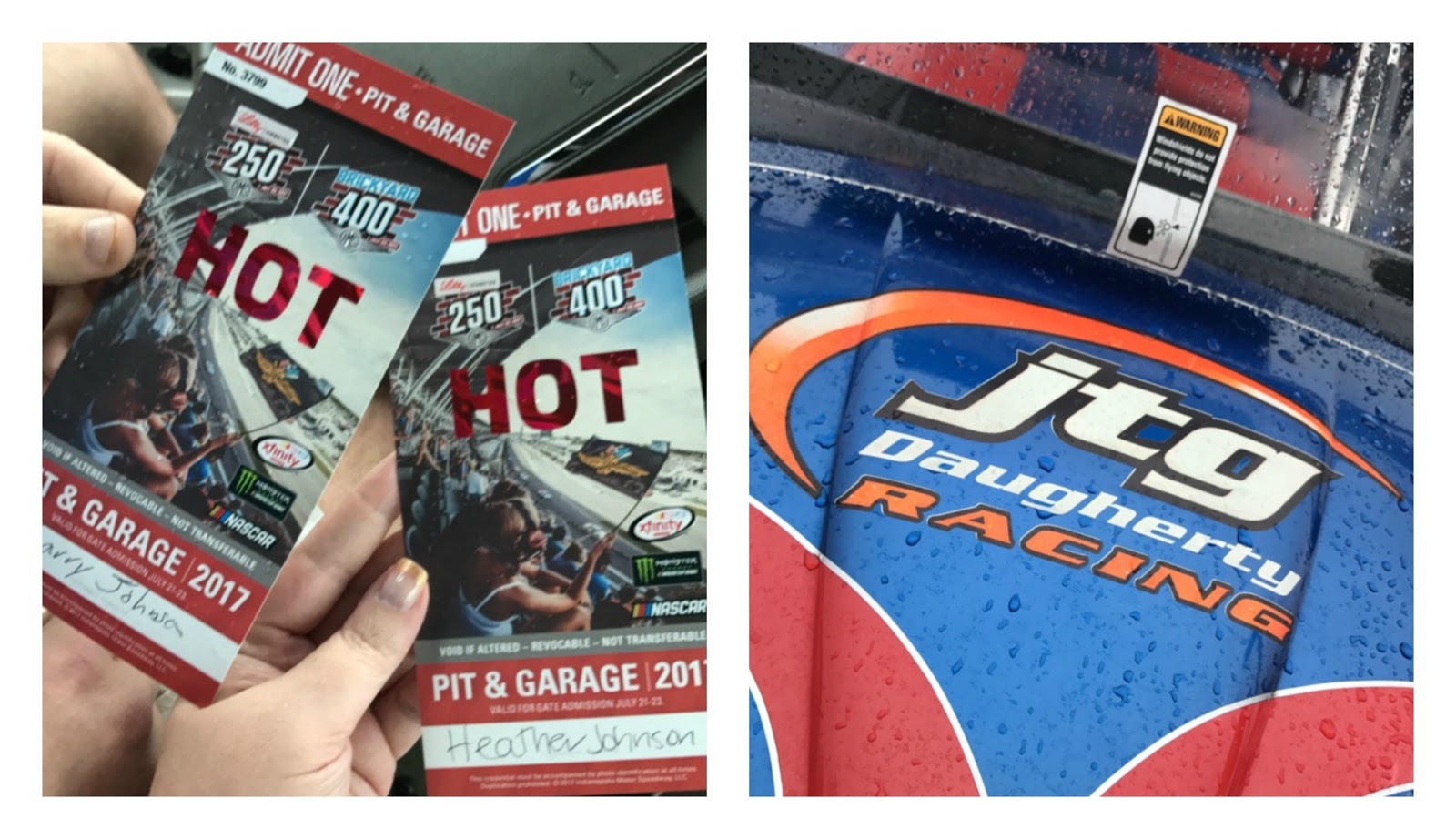 They invited my husband and I to go to the Brickyard 400 in Indianapolis! Not only did we get to go – we had pit passes and were going to be on the track!!!! Kroger is a sponsor of the JTG Daughtery Racing Team. 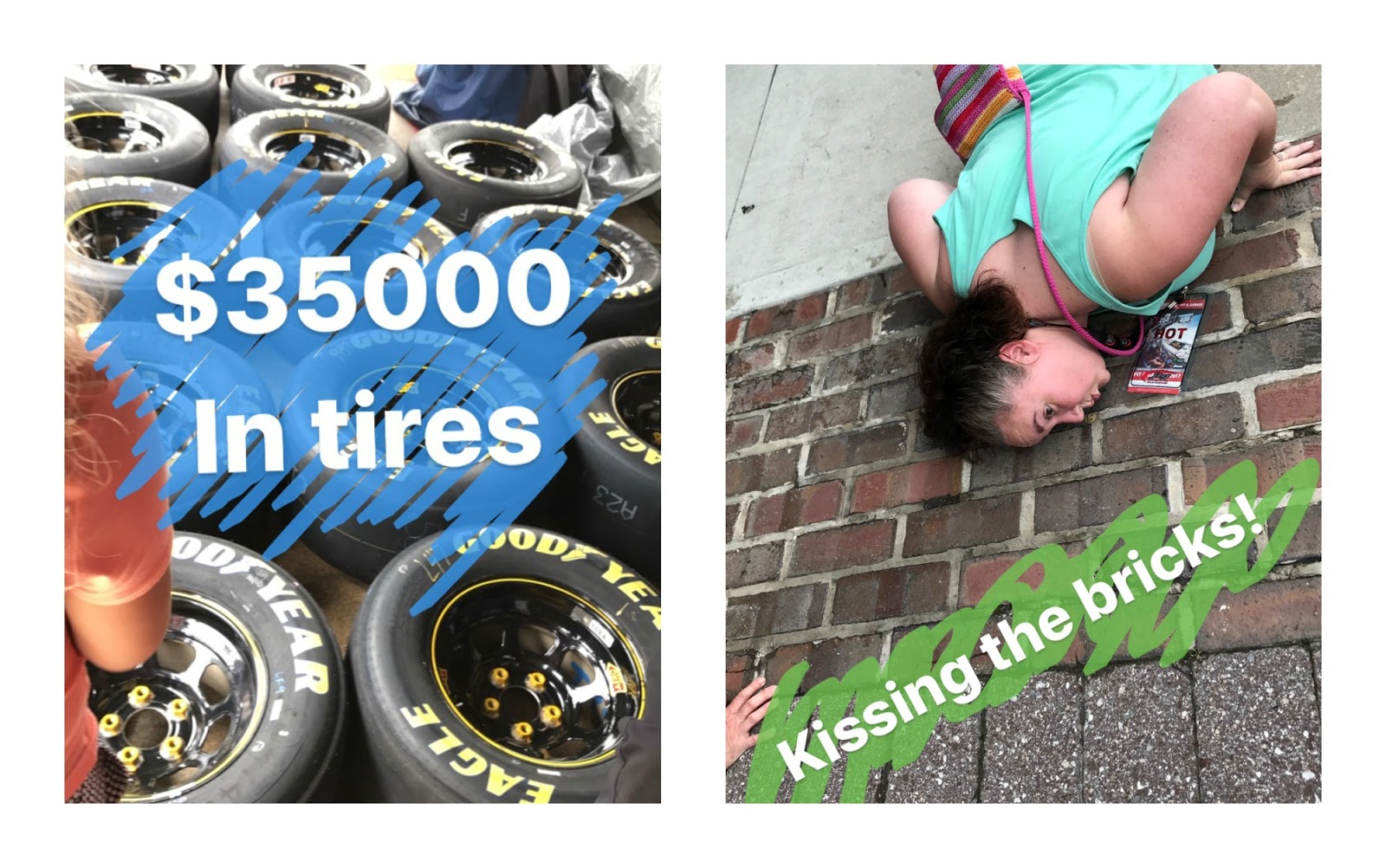 The JTG Team was awesome! They welcomed us to their motorhome and then gave us the grand tour of Indianapolis Motor Speedway. We learned a lot about the race cars – like the fact that they go through $35K in tires in one race!!! Tad & Jodi are two of the racing team’s owners and told us when they started the team – they did pretty much everything themselves (pit crew & all) – but 20+ years later – they have a great team.

Tad took us on a tour and made sure we all kissed the bricks. Neither of us started the day as “NASCAR fans” so we didn’t know about the tradition – but we quickly learned…a lot! 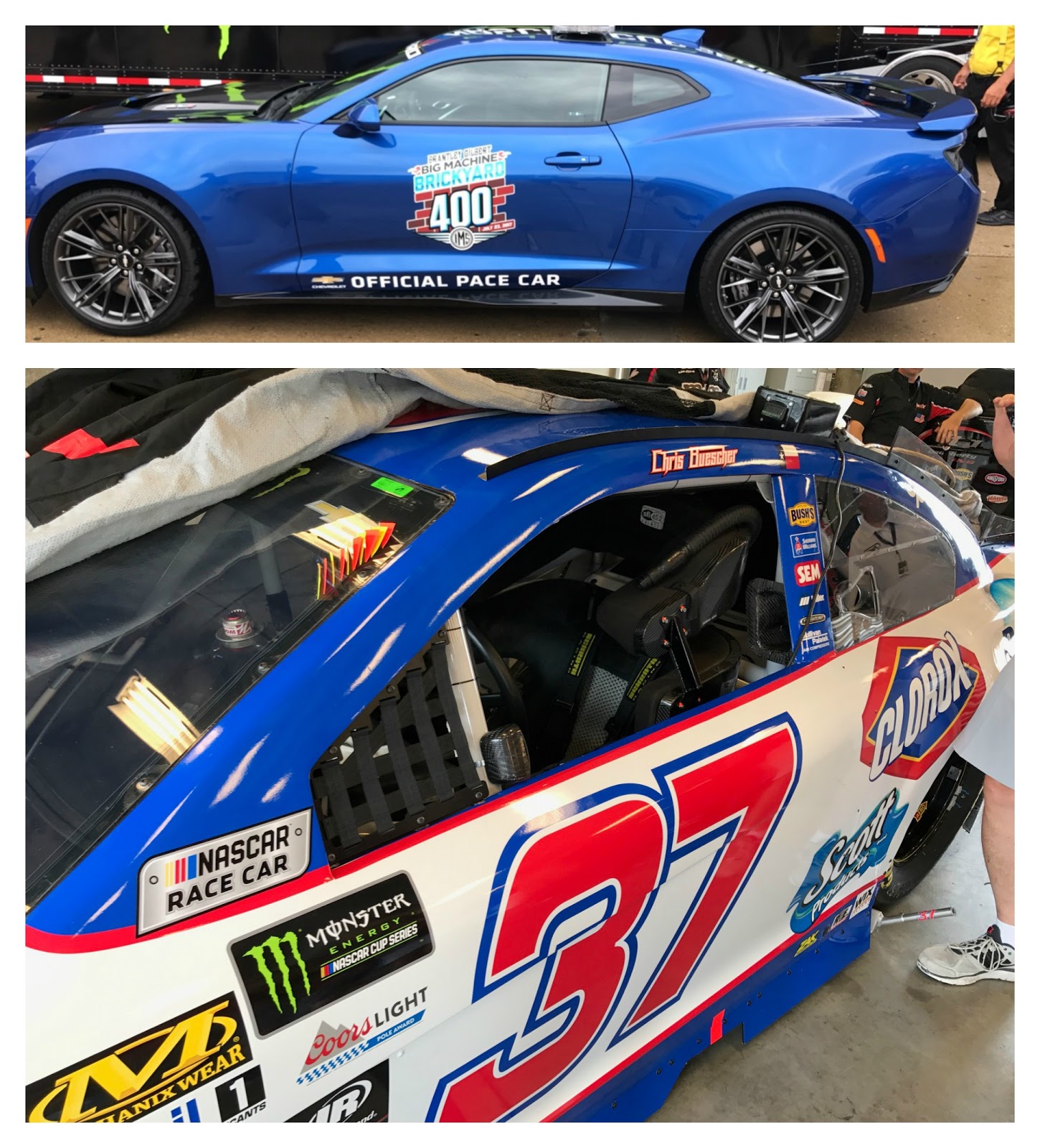 On our tour we got up close with the Pace Car which was being driven by Jeff Gordon and got to see the cars up close as well while they were doing pre-race checks. This is a completely unique and amazing way to see a race. They actually have two cars – but once things are set with one – you have to go with that car. The backup is more for pre-race day incidents. There are also 7-8 checkpoints that the cars go through before the big race. And if you don’t pass -you have to start all over. It was pretty amazing – I can’t imagine if a big NASCAR fan was there – they would have been geeking OUT! 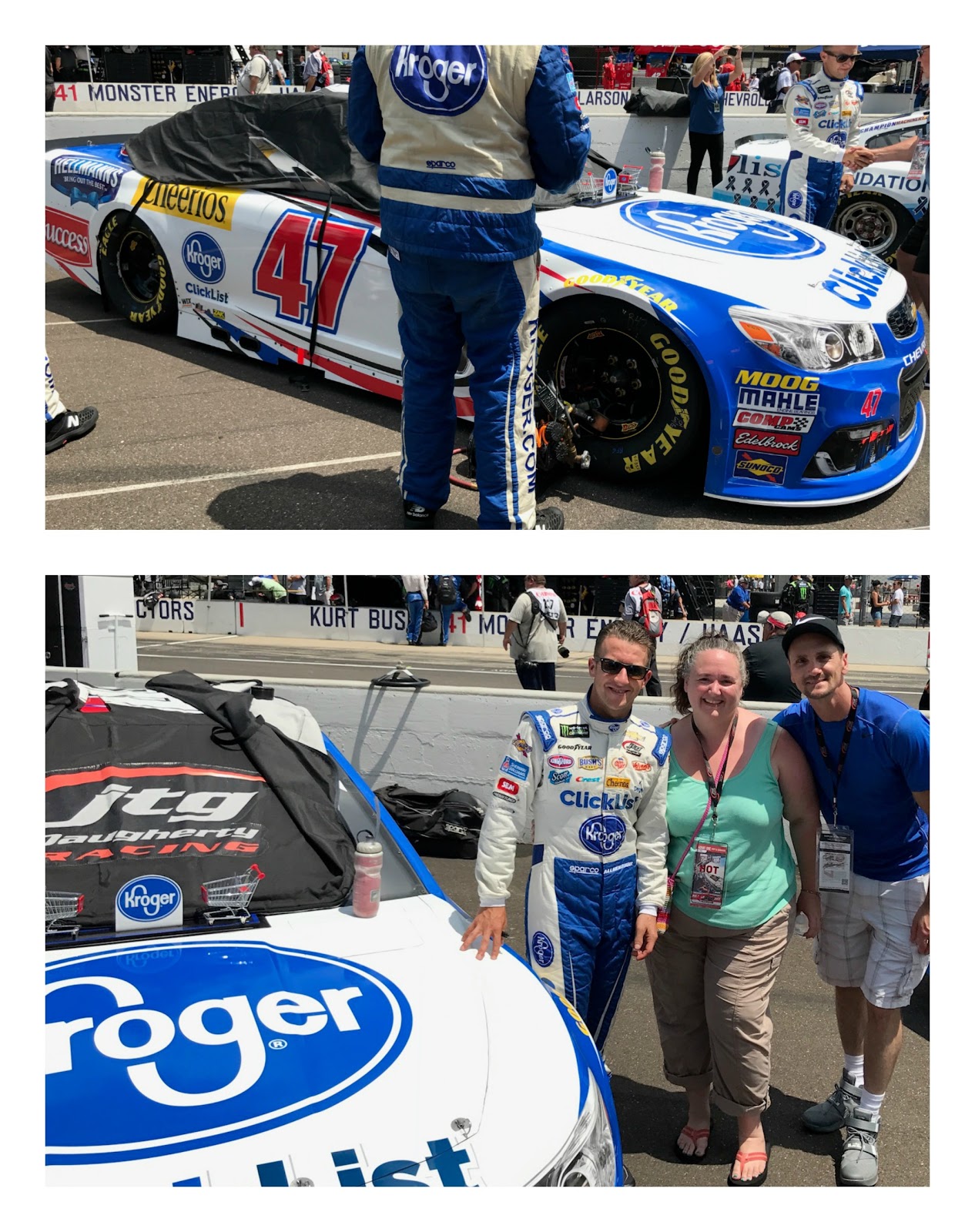 Finally it was race time! Earlier in the day we met the JTG Daughter team drivers – and they chatted with us a bit. The Kroger #47 car is driven by AJ Allmendinger and he’s a veteran on the NASCAR circuit. After meeting them briefly – they had interviews and pre-race rituals to take care of – but then – we got to get pics on the track with them as well. It’s crazy to think about how much non-racing work these guys have to do – if only all they had to do was drive a car! That’s only probably 1/10th of their job! 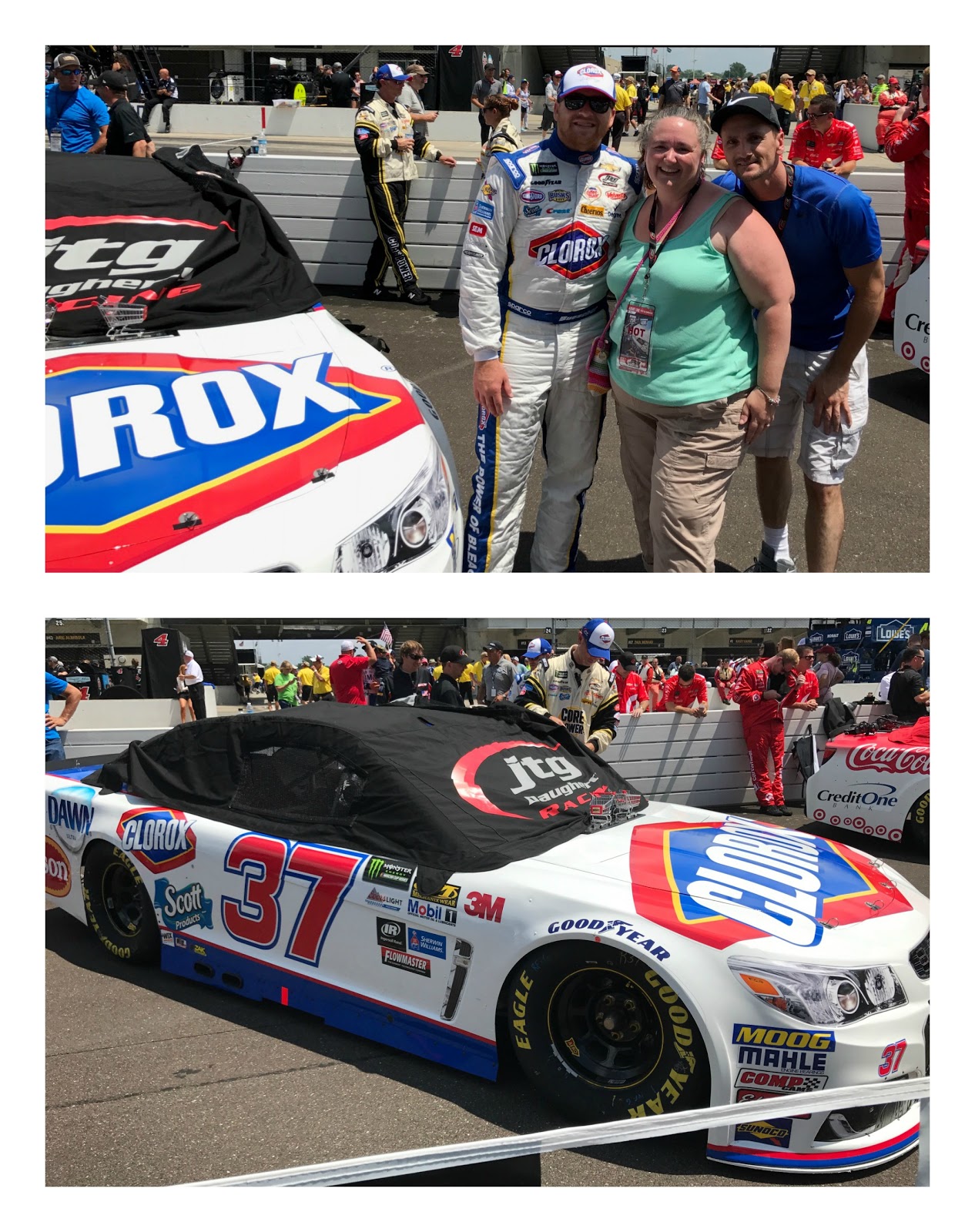 Next up we met Chris Beuscher who drives the #37 Clorox/Bush’s Beans car. They’re on the same team but Chris is only in his second year. They were hilarious together – definitely an older/younger brother dynamic.

Then it was RACE TIME!!!

At this point – we were taken to the track and we sat on top of the pit crew! It was by far the coolest way to watch the race! We were in Beuscher’s pit but had headphones and were hearing the happs with Allmendinger’s team so it was cool knowing what was going on with his car, etc. We got to see the pit crew do their thing up close & personal.  Everything is so much faster and louder than you could ever imagine.

The race was bonkers and had tons of wrecks and lead changes so it was pretty crazy. In the end – our team drivers didn’t win but we had a fantastic time. And – by the end of the day – Larry said “I’m gonna start watching NASCAR!!” so a fan was created.

Thanks so much to Kroger and the JTG Daughtery Racing Team for the exciting experience.