Yes – a premediated murder!!! Okay – well – it’s a Murder Mystery Dinner. But still – we witnessed a

A lot of other people were attending the murder as well. This murder was taking place at The Spaghetti Factory in Fairfield. 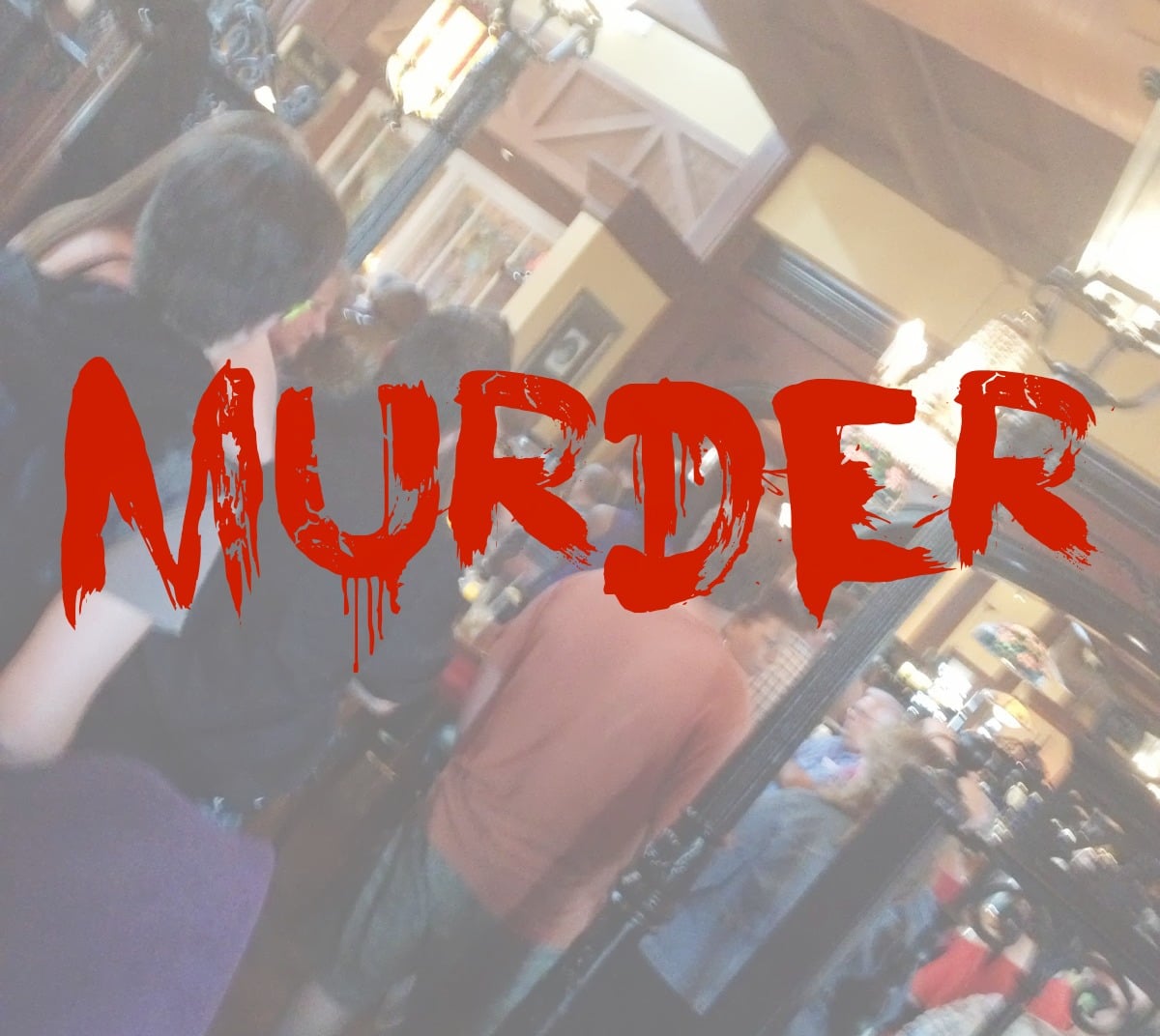 We arrived 15 minutes ahead of the 530pm time as suggested on the website. There were probably 100 people in attendance. I’m not sure why they tell you to get there 15 minutes ahead – or even at 530 – we waited until 6pm before a line even formed and then it was another 30 minutes to get seated. So my advice to start is – don’t worry about being “on time”. Needless to say – we were frustrated – we all thought that you’d be seated in the order of when you got there. We thought maybe it was how they sold more drinks?!

Nonetheless – we pressed on – as did this Taylor Swift lookalike. There was an 80s theme to this murder – so some folks come in costume. The theme of this adventure is definitely – you get out of it what you put into it. If you are one to jump in – wear something funky that matches the theme and have fun – you’ll definitely enjoy the night. 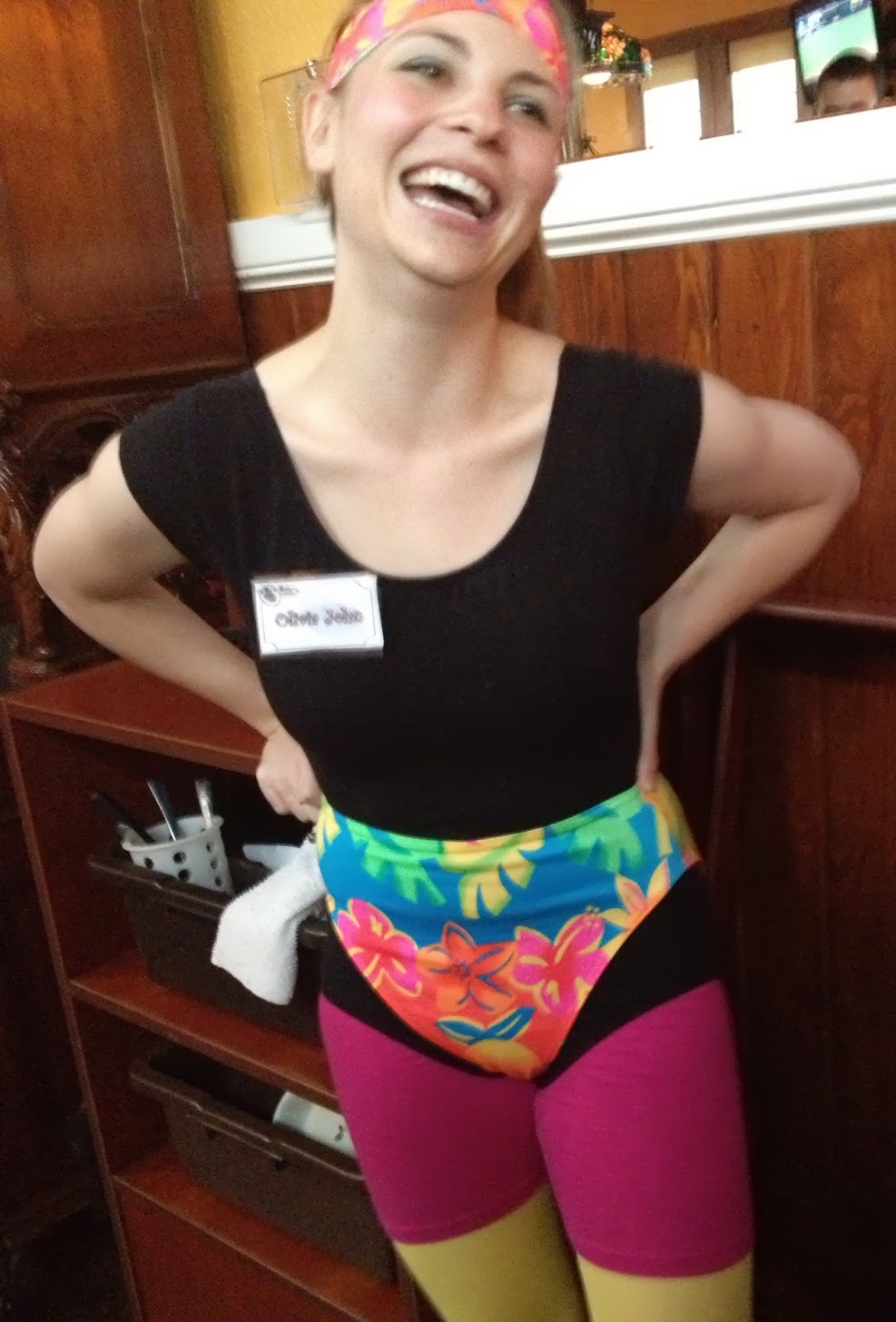 The Murder Mystery cast also got into it as well – this was Olivia John in her Get Physical Getup. 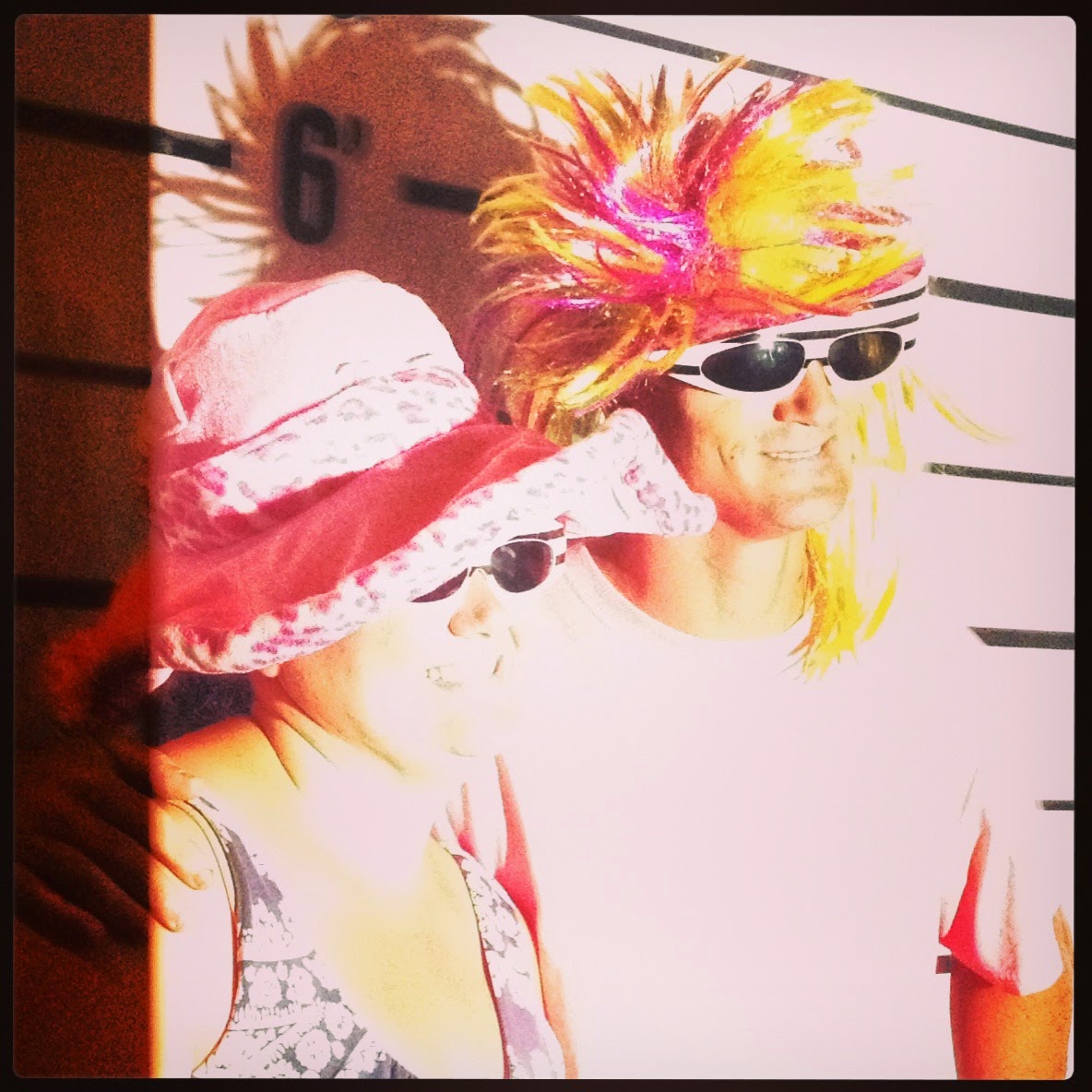 Why was the line to get in soooooo time consuming? They have you come in and dress up in some time period hats and the like and get your picture taken in front of the wall. (To be sold to you later of course) 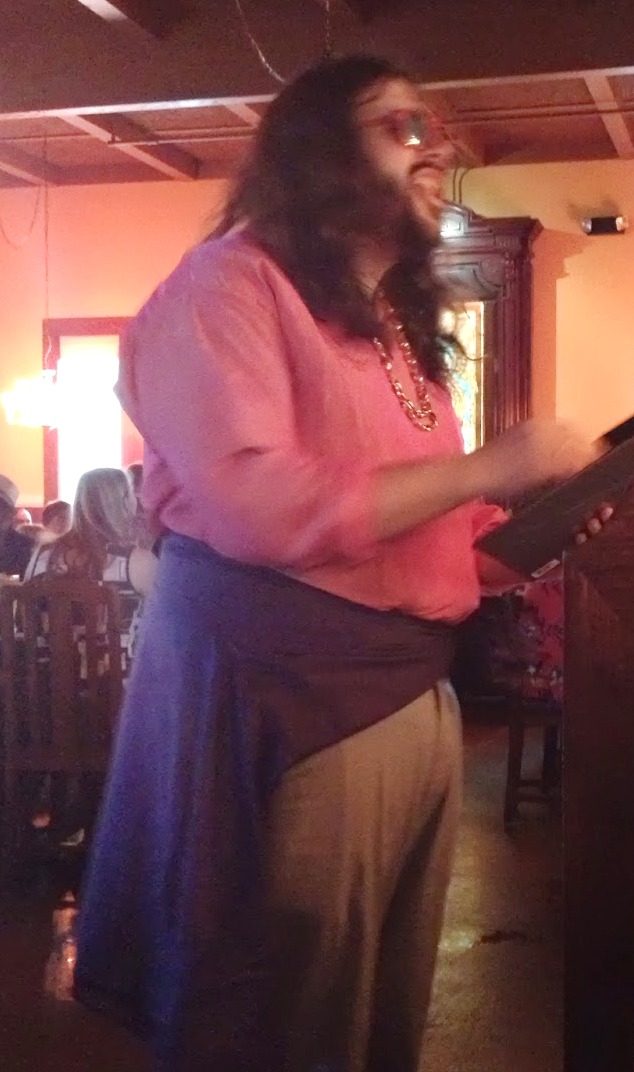 Here was our host and MURDER victim – he came out and explained the set up and rules to us. We were seated in a separate banquet room and were fairly close to the host – but it was easy to hear him. 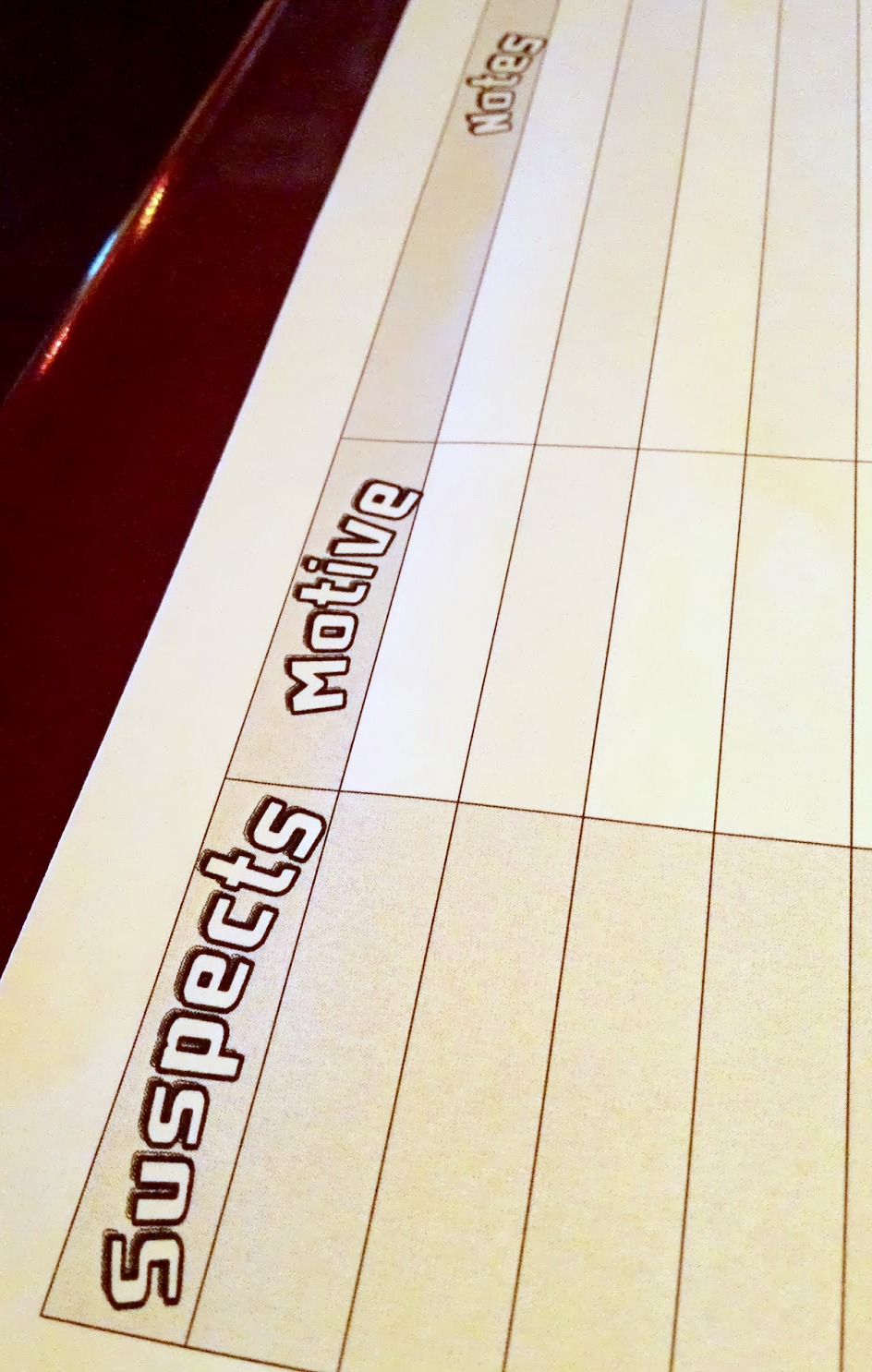 There wasn’t a ton of set up to the evening but we did find a paper to fill out with suspects, motives and notes. 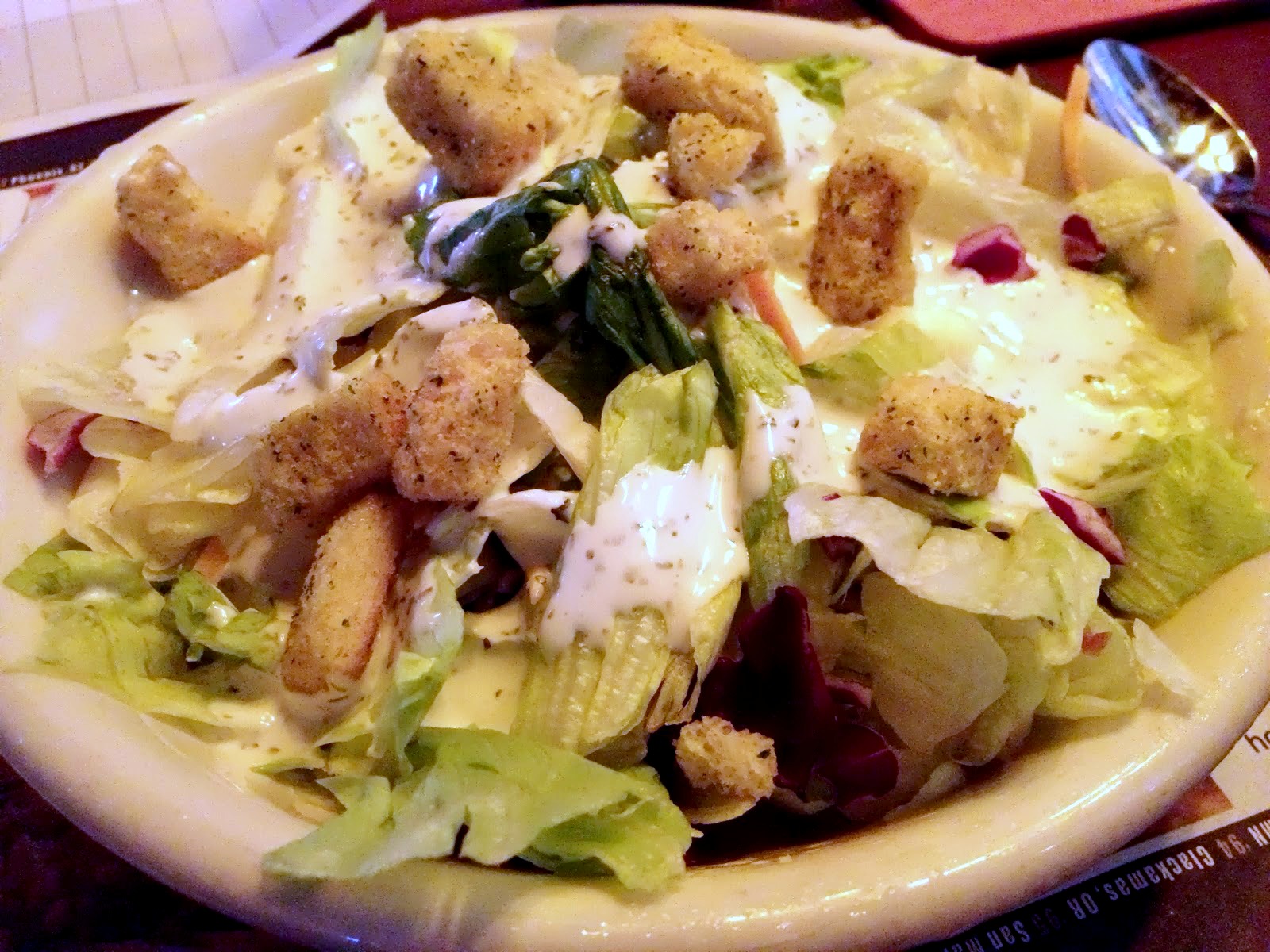 Dinner is included in the price – and we started with a salad with the house ranch. I’m not really commenting on the food because the Murder Mystery folks don’t have control over that. I have reviewed Spaghetti Factory before – so feel free to read up on it there. 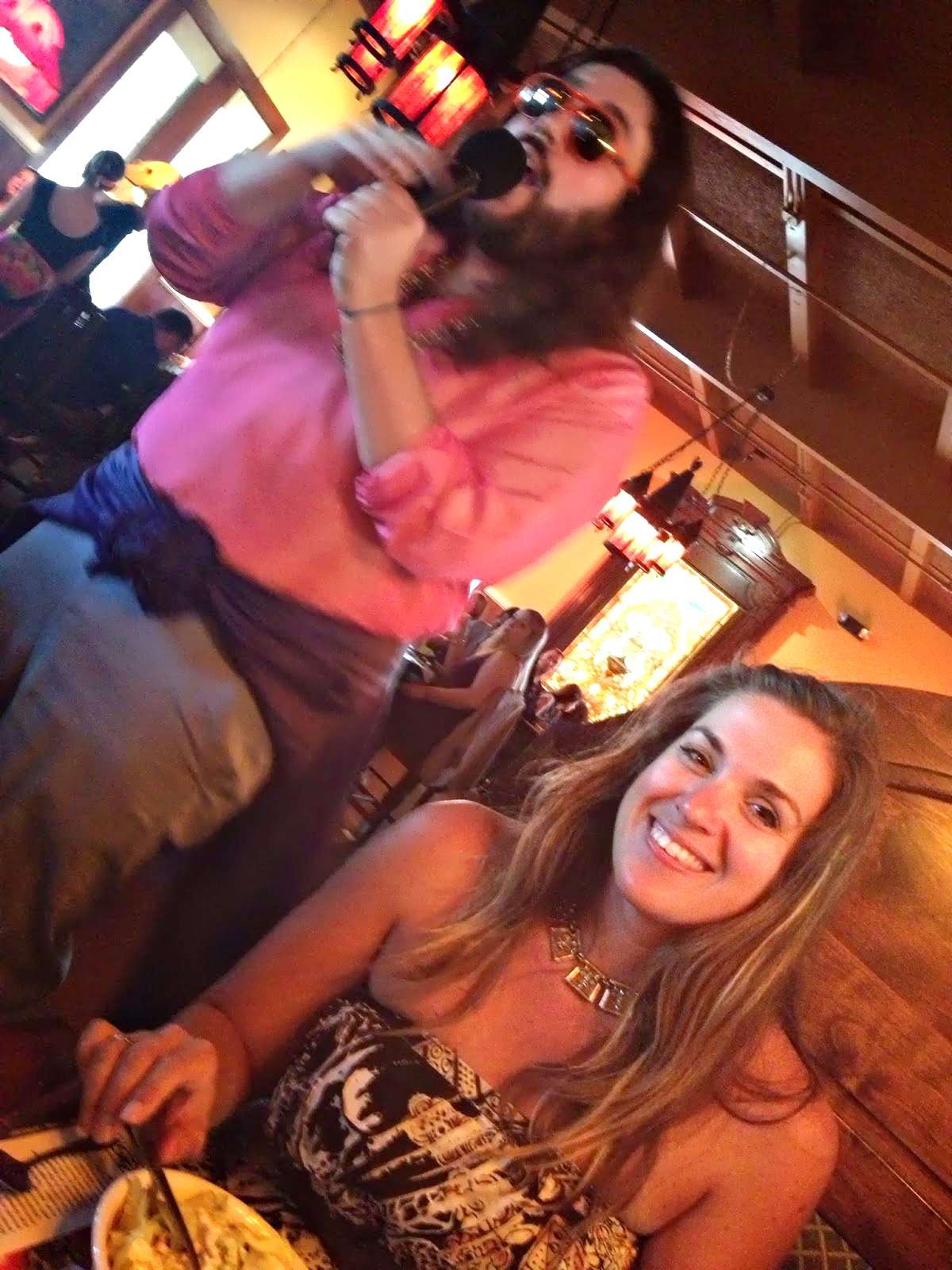 Our main host came over and was giving Nedra a hard time – accusing her of flirting with the rock star! She was a good sport of course. Soon after – we witnessed the MURDER! After the MURDER, we were instructed to start interviewing the suspects – which included many of the attendees. Dan got REALLY into it – he was doing his best Columbo impersonation for sure.
They “choose” the suspects from the audience as they are all coming in. Once the show starts – they introduce the characters/suspects and identify those of us munching on our salad that will be part of the show. They did pick a wide variety of people from around the room. There were folks in big parties, small parties, old, young – they did a good job. 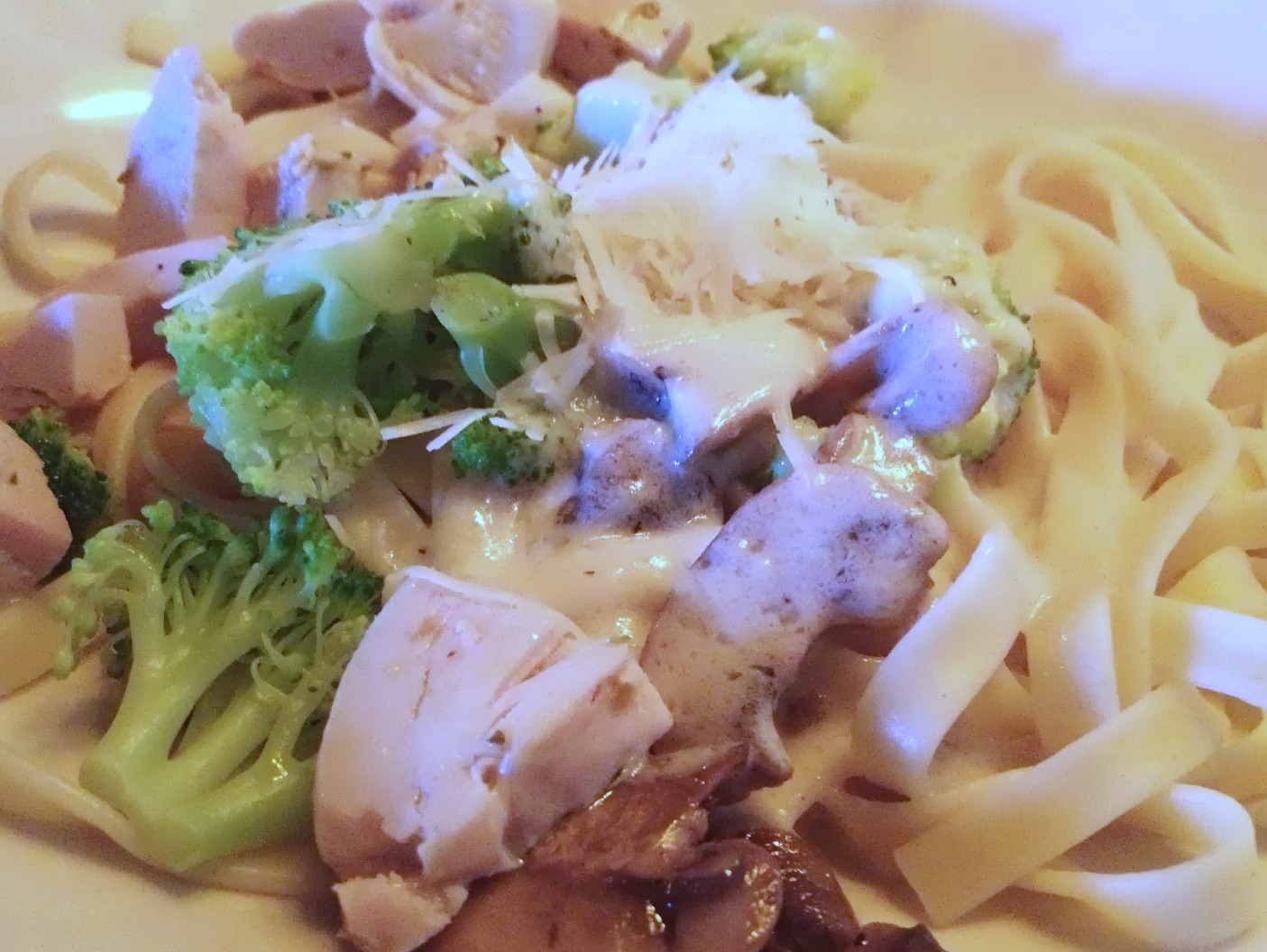 You go through a round of interviews and then they bring out another course and do more of the story. Next up was our entree – we had a choice of 3 different items: alfredo, marinara and meatballs. 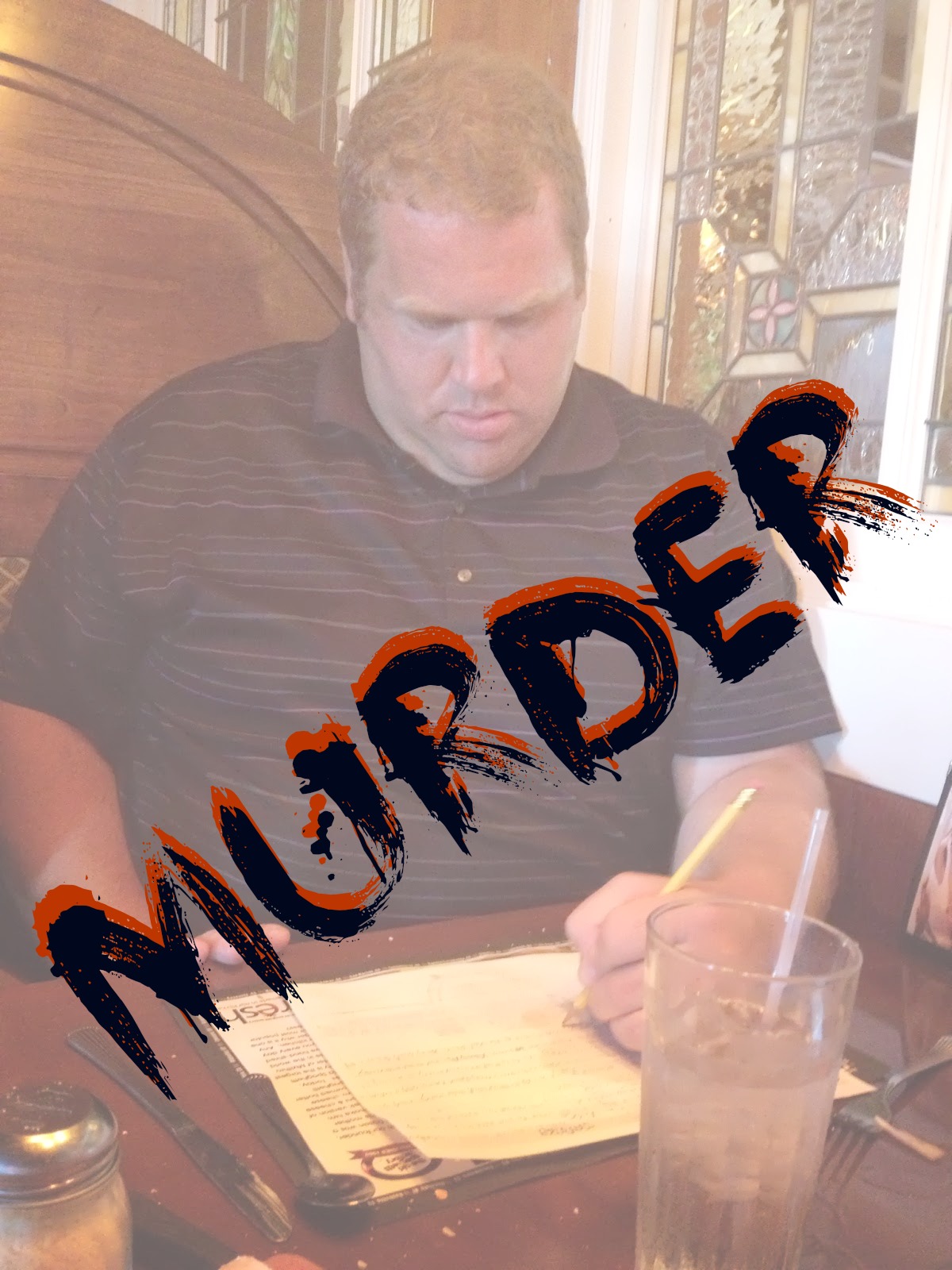 Dan – still very involved in the investigation – was going over his notes as we discussed who we thought the killer was. Beware – they ask you to come up with a team name. This is always my favorite things to do at Trivia Nights but man – my brain had nothing this night. We ended up going for a mock on “Olive Garden” and I think our team name was “Pickle Field” or something like that. But be prepared… 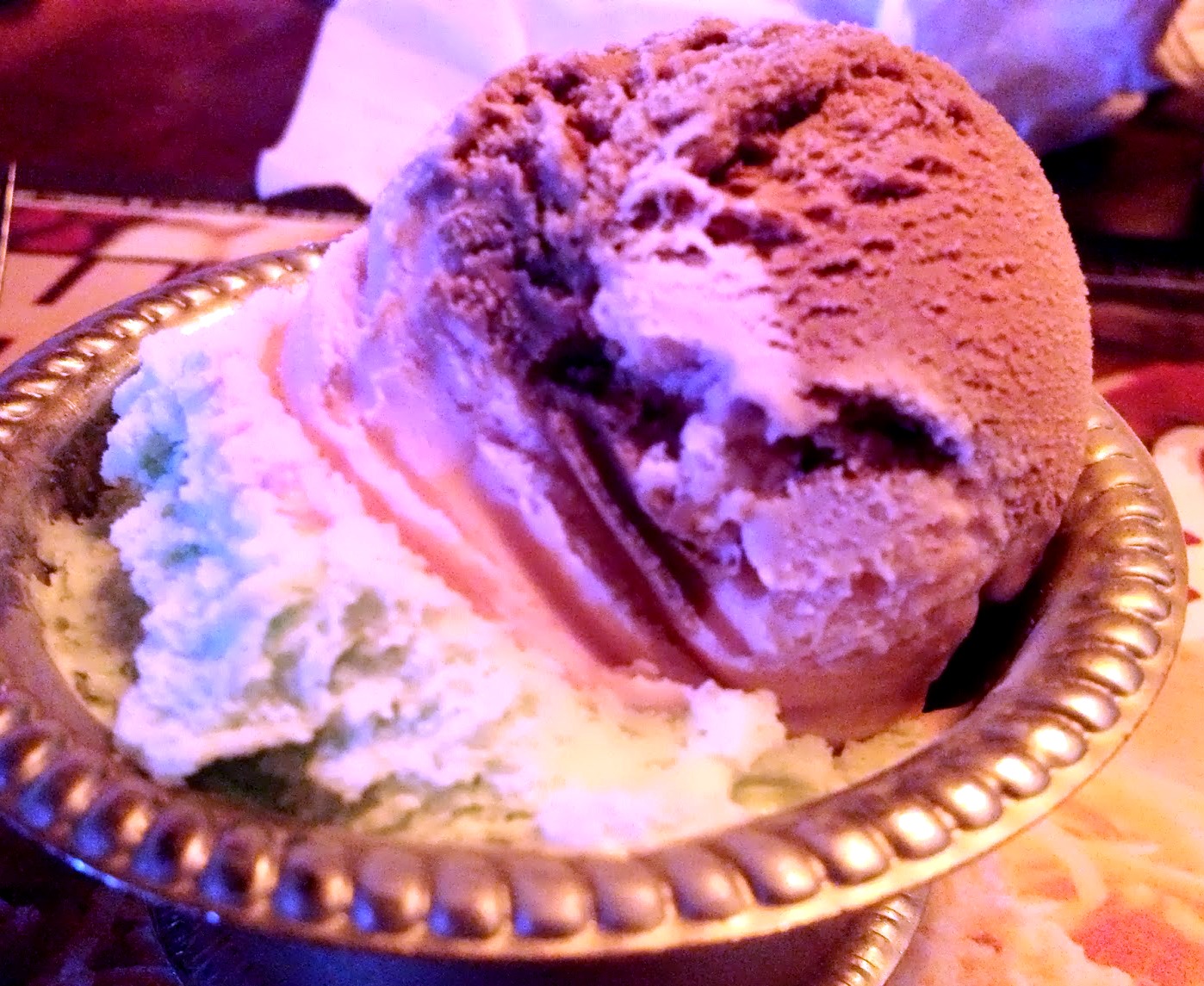 While we were deliberating our team name and our murder identification – we had a cup of ice cream for dessert. I thought it was nice to have a dessert as well. 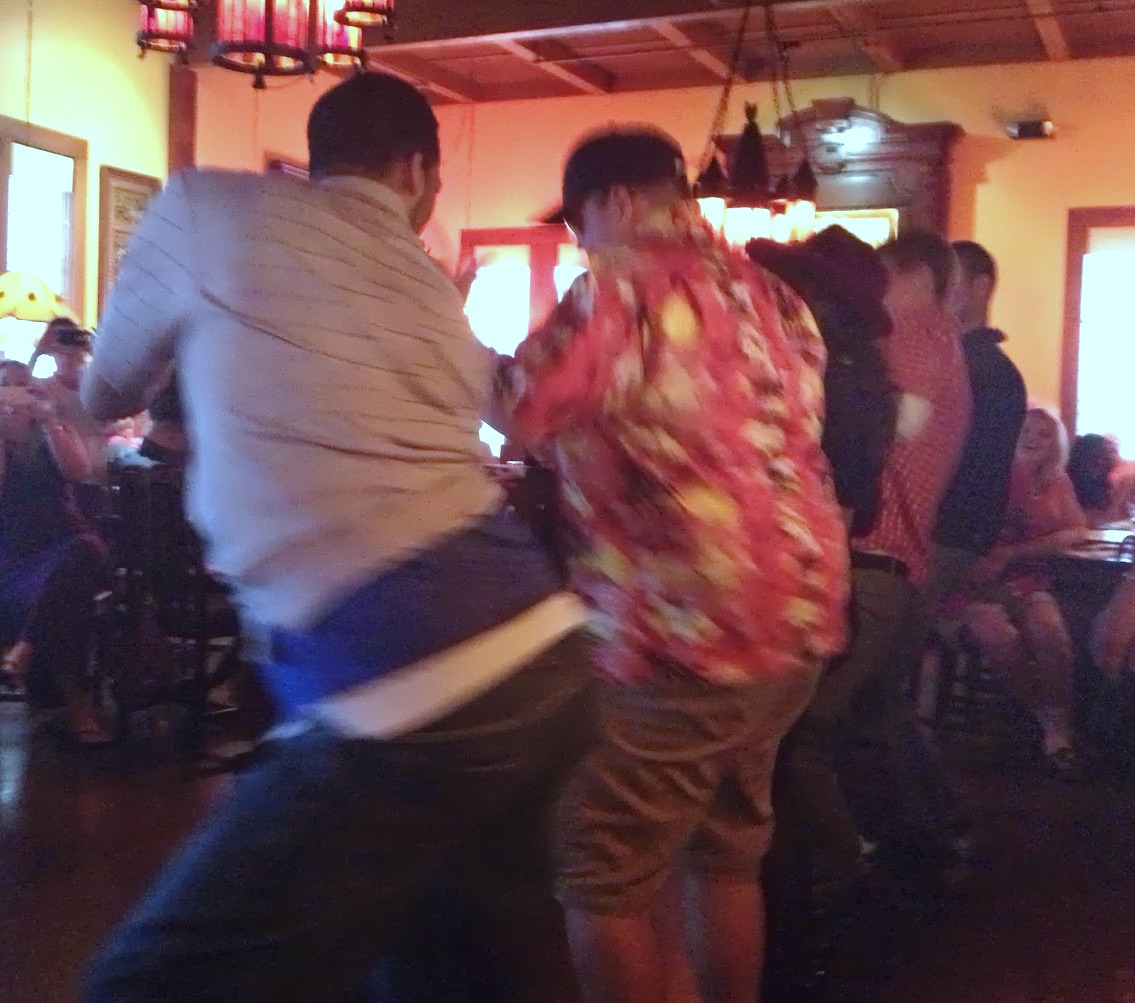 There was even a dance that some of the audience members did at the end of the night. The guy on the end closest to us was REALLY getting into it! He was awesome. 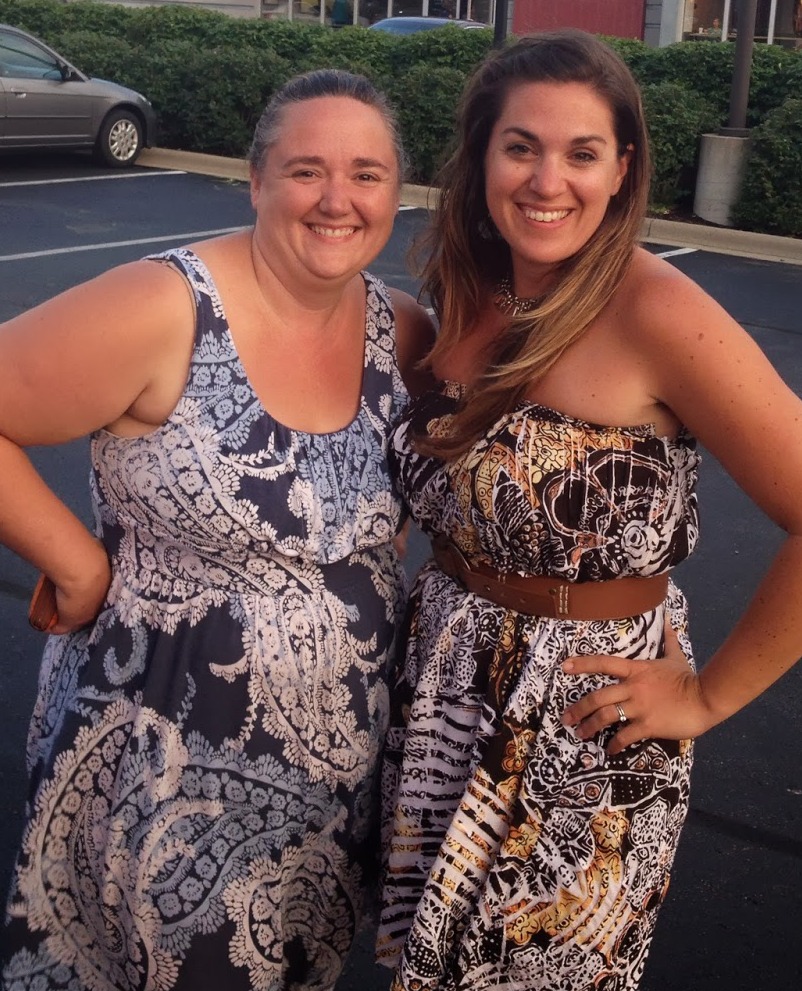 After – we made the husbands take a pic of us – we had a great time. You can check out my friend Nedra’s blog as well – she is the Adventure Mom and has adventures with friends, kids, her hubby (like this one) and even on her own!

If you’d like to attend a Murder Mystery in Cincinnati (or anywhere in the US) – check out their site.

The four of us enjoyed our date night – as I mentioned – you get out of it what you put into it. I think it’s a great activity for a large or small group if you’ve got active, outgoing people with you.

* We were comped the four tickets for the Murder Mystery dinner but did tip our waitstaff accordingly.