As I’ve mentioned before – I’ve never been to Jeff Ruby’s for steak. The only Ruby’s I’ve been to is Bootsy’s. I just have a hard time justifying $35 for a steak! But this week – I finally got the chance! Our clients from Mother’s Cookies were in town and we took them out to the Waterfront and last minute – I got the invite to go along!

Jeff Ruby’s Waterfront is on the Covington side of the river next to White Castle! It’s sort of funny to have a really expensive fancy place next to dirty ol’ White Castle! But hey – I love my sliders. 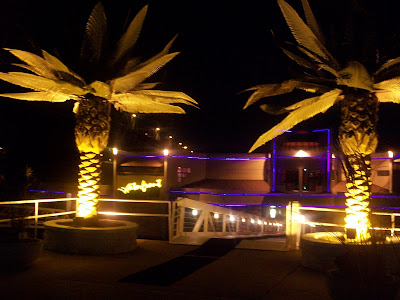 It sort of has the look of a casino. My good friend Liz over at Get in Mah Belly just reviewed it and definitely mentioned all the fabulous Miami Viceness that is the Waterfront. The palm trees – the neon – we even nicknamed a couple of the clients Crocket and Tubbs for the night. 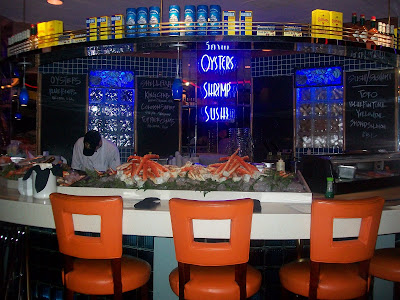 The inside has some impressive sights – this seafood bar looked out of this world and was one thing I was definitely looking forward to. 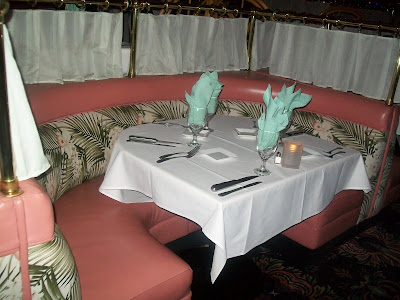 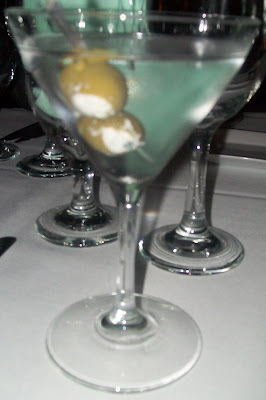 One coworker got a martini with bleu cheese stuffed olives…I’m not much of a drinker so I stuck with the Diet Pepsi. Don’t need to get schnockered with the clients! 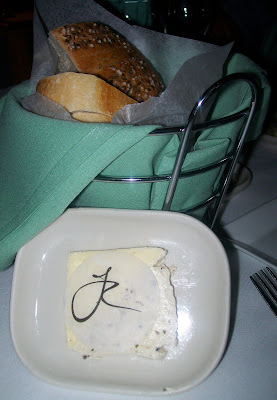 Warm fresh bread was served with some herbed butter. It had a paper with Jeff’s (like we’re buds – Jeff) signature initials. People thought the signature was in the butter in oil or something but I sadly told them – no it’s just paper – seems more obvious in this picture – but it’s dark in the restaurant. 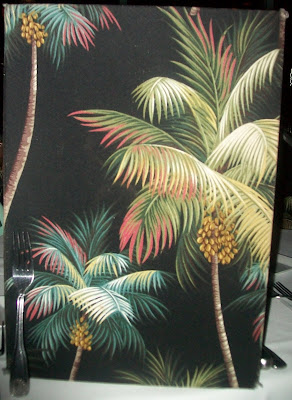 The menu is giant. Not as in the amount of items – just literally the menu itself. Notice the proportion compared to the fork leaned up against it! It was the size of a small child. 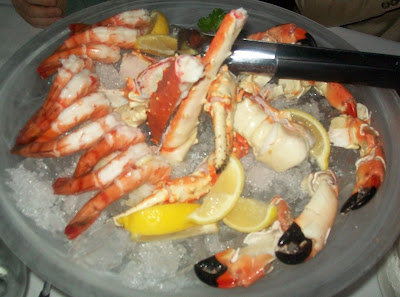 Ah the seafood! We had two HUGE plates of seafood delivered to us along with shrimp sauce and a sweet mustard. There was king crab, some other crab and shrimp as big as my head. This to me was THE highlight.

I was enjoying the crab claws and shrimp – then decided to try the King Crab legs sticking up in the middle. OMG they were sooooooo sweet and delicious. I wanted to finish off the plate but knew there was ginormous amounts of steak headed my way so I refrained. I should have gone for the gusto – argh – I want more of that crab!

So if you go – get some of this wonderfulness – seriously! 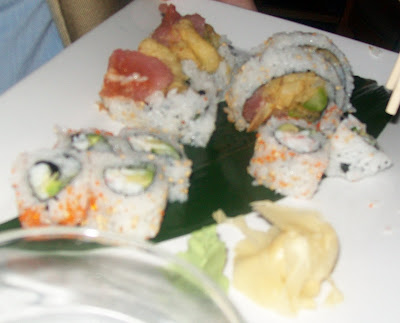 A couple people dabbled in sushi – the picture sucks – sorry. They were all pretty pleased with it. I think there was a B+ thrown around. When they found out they were dining with THE Food Hussy – they all had opinions to share! 🙂 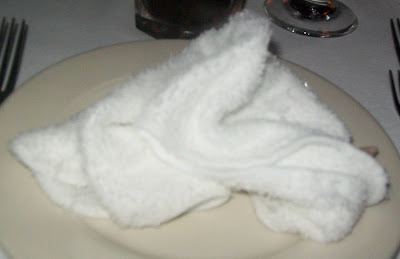 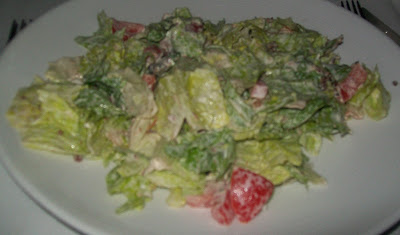 With the steak you get a salad and potato. You can have either the Freddie (BLT) or the Greek for salad. I chose Freddie… Not very photogenic that Freddie – but it tasted pretty good. Not great…but okay. I’d rather have Larosa’s BLT salad actually. 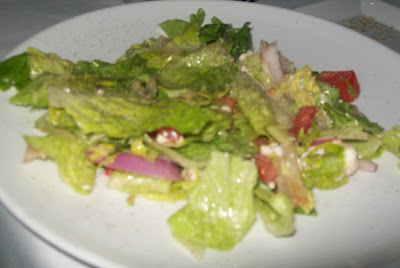 My table neighbor got the greek…forgot to ask him about it. But really – it’s a simple plain greek salad…nothing special here either. 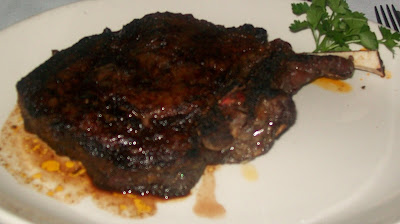 And now…the steak. I took my head honcho‘s advice and got the Jeff Ruby Jewel. It’s a 24-oz bone-in ribeye for $34.50. It was in the middle of the price range and had the bone-in which is usually juicier. I got it with just the seasoning because I really wanted to taste the steak itself and see if it was going to meet the expectations that preceeded it. I was sure there would be plenty to take home to the BF as well – since he was working while I was having fun!

And now…the opinion. Meh…I think Jeff had an off-night.

1. It was a bit charred – like burned charred on the edges. I’m not a fan of the burnt flavor.
2. I ordered medium rare – it was medium.
3. It was fatty and greasy. Like greazzzzzzy.

I was definitely disappointed. It wasn’t just me either – I asked the honcho his thoughts since it was his reco and he said the same thing – it was a little off.

I really was hoping for a knock-my-socks off experience…kinda glad I wasn’t paying the bill! 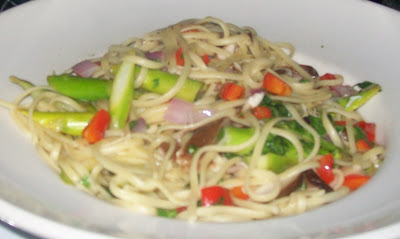 Short notes on other meals at table – we had one vegetarian (ha at Jeff Ruby’s) – she got vegetarian pasta – looked good. 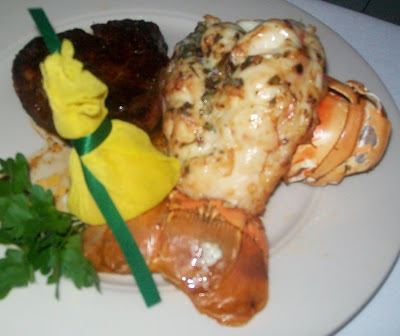 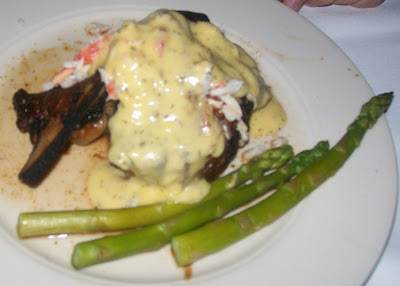 Other bossman got a smaller JR steak and did the “Collinsworth” thing to it. Basically covered it in everything there is in the building! Crab, Bearnaise, etc… He loved it – ate too much and was stuffed. 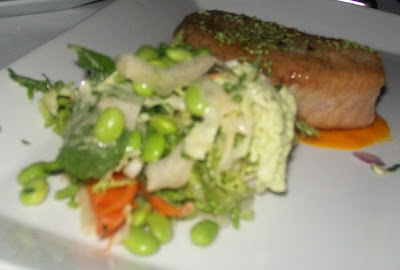 There was another rebel – he got tuna and some sort of odd vegetable concoction. He enjoyed… 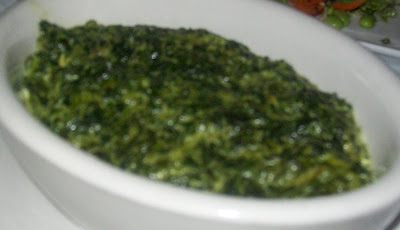 He also got a side of creamed spinach…sorry Gil…it looks yucky!

Here’s a shot of the inside of my steak…still bummed that it wasn’t better…that’s definitely medium and not medium rare. 🙁 I ordered mashed potatoes but didn’t get them with steak – they brought them out quickly. They were okay – very creamy but not much flavor.
So there you have it – I’ve now been to a Jeff Ruby’s and had a steak. Wasn’t as good as I’d hoped. I really did enjoy the seafood – that was EXCELLENT! Maybe I’ll go again sometime for crab and mac & cheese (I hear that’s pretty good).

The BF did eat the leftovers – he’s not too picky and said it was good. Did mention it was kinda fatty…and one look at the picture made him say “Wow that looks greasy!”. Maybe it was just an off night… 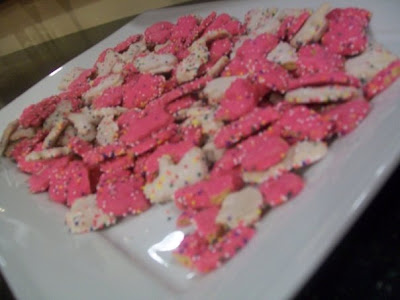 I must end with a plug for the fabulous clients – we love our Mother’s Cookies! If you’re not familiar with them – there is a reason – they’re a West Coast brand. Earlier this year they went out of production but Kellogg’s snatched them up and brought them back! Any Mother Lovers out there? I love the Double Fudge and the Circus Animal cookies (shown above).

If you do remember Mothers and have a craving for them – you can get them online! Buy Mother’s Cookies online!

Hey – I gotta plug the clients!