I’m heading through the alphabet and got to the letter H. The winner was Hahana Beach – and the runner up was Hot Head Burritos. I actually visited BOTH on Friday! So here’s the winner…the runner up review will follow soon.

Speaking of the ABC’s – you’ll notice I have the poll for the letter I up to the left. Yes – I’m cheating. My good friend Rachel told me about Island Frydays so long ago – there aren’t many I restaurants – so I decided to take this one in my own hands (she’ll be so happy). It’s a Jamaican restaurant in Clifton and is really cheap – woohoo! I’m looking forward to it. 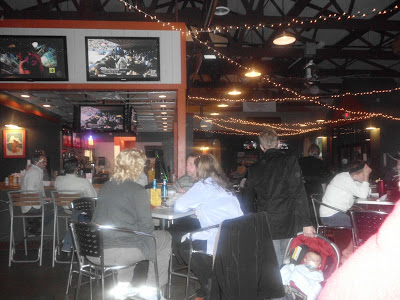 Hahana Beach is the brainchild of the Bob Slattery – the same guy that also Reach Magazine, Wags Park, Slatts Pub and a variety of other businesses. I know this because I worked for Reach last summer when they were building Hahana! Hahana Beach has beach volleyball and hosted the ATP event last summer as soon as it opened. It was a crazy time!

The restaurant is very big and has a wide-open feel. There are garage doors that lift up during good weather and lead to the courts. 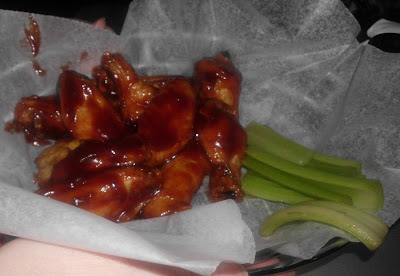 There were four of us and we started with wings with BBQ sauce ($8.99). They were fine – my friend said a little fatty but the sauce was very tasty and sweet.
We also had the crab cakes ($8.99) – again – fine. One of our party thought they were a little spicy – I thought  they were just okay. Nothing too special. 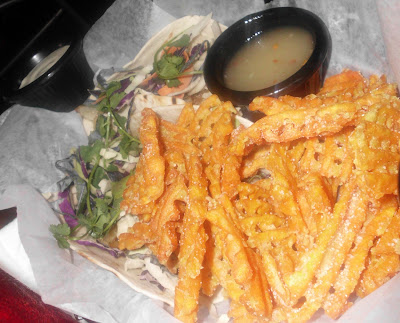 Their menu is in the process of changing – they currently list Steak Kabobs but our server mentioned they are no longer available and that a new menu will be out soon. My friend instead chose the Baja Fish Tacos with sweet potato fries ($8.99). The sweet potato fries are fantastic. My friend was not a fan of the tacos and compared them to something you really shouldn’t be eating. 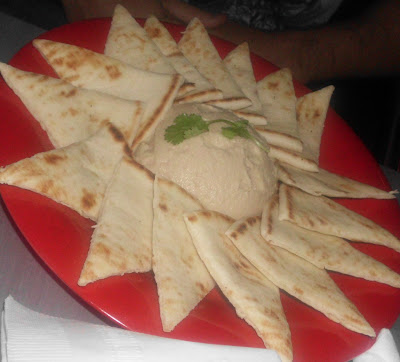 Larry wasn’t too hungry and got the hummus ($6.99) – I did sneak a bite and liked it. Their menu says it’s the “fresh hummus of the day” – I wonder if they’re going to add different flavors on different days – I think that would be something unique to add. 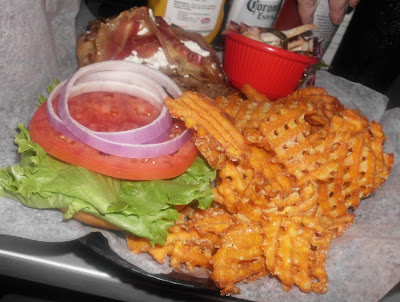 I got the West Coast Burger ($9.99) with sweet potato fries. The burger had goat cheese and bacon – being a huge goat cheese fan – I was stoked. I ordered my burger medium rare. It was just okay – I really only ate about half – for some reason the goat cheese didn’t taste so great (nothing like Terry’s goat cheese). I’m not sure if it wasn’t cooked enough or what – I just knew I didn’t feel like finishing.

The burger came with a side of Hawaiian cole slaw – not a fan of that either.

What I was a fan of were the sweet potato fries. These are DELICIOUS! First – they’re waffle fries – which are the best – then they’ve got little bits of sugar baked in. The fries were the best part of the night – by far! Everybody at the table loved them.

Dessert was even included – not sure if they do that for everybody but it was a nice treat! They brought out chocolate chip cookies for each of us. They also (at the boys request) brought out some of the fruit that was soaking in Absolut. The cookies were pretty good – not as good as Max & Erma’s – but a nice ending to the meal. The fruit – GAG – the boys were much more interested than the girls. It was too strong…it’s not really a dessert option – the server just brought it out for the guys since they were asking about it. 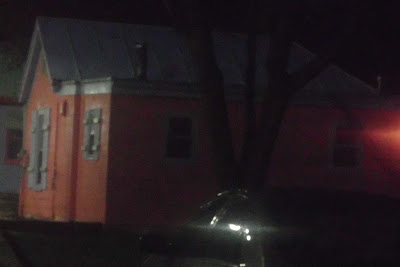 As we left – we saw this house out back. The photo doesn’t do it justice – that house is a peachy pink awesome color!!!!
Why Should You Go? We had a fantastic time at dinner and the atmosphere is very relaxed and enjoyable. The service was excellent – attentive but not overbearing (Kyla was fantastic!). My only disappointment truly was the food. It was okay. Something was off about the burger – I’m thinking it wasn’t cooked enough. I was enjoying the company so much – I didn’t really check the middle. That said – I’d go back in a minute for those sweet potato fries! Spring leagues are starting up soon – so if you’re up for some beach volleyball – that’s one reason to go. If I was in the area – I wouldn’t say no to going back – although if I was in the mood for a burger – I’d likely head to FlipDaddy’s.