So a LONG time ago – I got an email from the Kinneret Cafe in Deer Park asking me to stop out for a review. It was seriously like over a year ago…it’s sort of small and in an odd location – so I just didn’t think about going too much. Then recently I was browsing Restaurant.com and saw them so decided it was about time I get my butt over there. 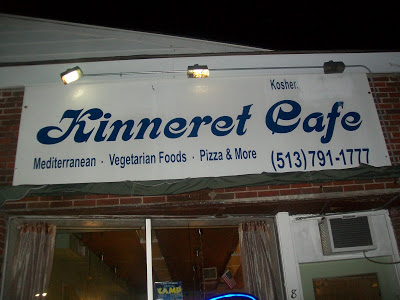 It’s on Plainfield and is just a couple doors down from my vet’s office (I love me some Dr. Werwa!). There are a few spots right out front of the cafe and luckily we snagged one of those. Inside it’s probably got 15 tables or so. You can definitely tell it’s family run. Also – just from the flyers on the walls and such – a lot of Jewish people eat there as well – not sure if it’s all Kosher but just throwing that out there if you’re looking for someplace new! 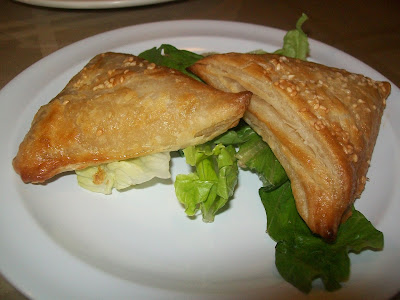 I started out with the Borekas ($4.50). You can get them filled with potatoes or cheese – I (in 2010) chose cheese – wasn’t sure what kind but turns out it was cream cheese. These were pretty good – crispy on the outside, flaky on the inside. I wasn’t a big fan of the filling – seemed a little too much – I wanted something savory inside – or some onions or SOMETHING. It was just a bit bland. 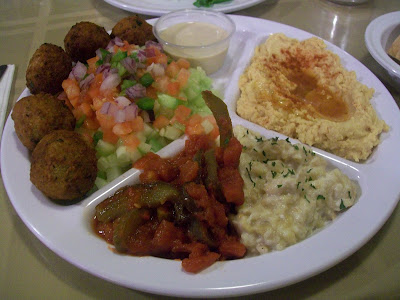 Since I wasn’t sure what to try – I went for the Mediterranean Plate ($9.95). There is falafel, hummus, babaganush, mafbucha, israeli salad and pita (that’s pretty much in the picture too – starting with the falafel going clockwise). The falafel was fine – not as good as Myra’s. The hummus was my favorite – it was thicker and chunkier than I normally like but a good flavor. I don’t like eggplant and that was reaffirmed when I tried the babaganush. The mafbucha (maybe?) was basically cold stewed peppers – didn’t like that so much either – mainly because it was cold. The salad was a lot of cucumbers, tomatoes & onions with some dressing on the side – it was okay.

Overall – I didn’t love it. I really didn’t even like it. It all had a bit of an after taste.

I want to admit though – I’m not a vegetarian or vegan – so MAYBE it’s just not my taste palette. I have enjoyed this type of food (minus the eggplant) at other places though so…???? 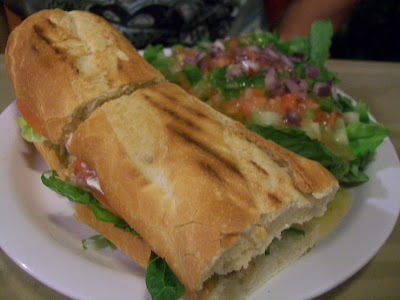 Larry was a bit disappointed to realize there wasn’t any meat there. They did have some fish entrees but he decided to branch out and get a sandwich. He chose the Smoked Salmon Sandwich ($9.50) with ss, cream cheese, tomatoes and lettuce along with the side salad. We were both pleasantly surprised to find the sandwich to be toasted (it says toasted baguette but we didn’t see that). This sandwich was DELICIOUS!

I think we should have both gone for sandwiches – I probably would have been a happier (and more full) customer. Especially since I see a mushroom, mozzarella & tomato panini on the menu – but I felt like I should try some of the more Mediterranean items rather than a panini.

Why Should You Go? I think if you’re a meat-lover, you probably shouldn’t. But if you’re leaning vegetarian or vegan – check it out. The staff is extremely friendly and attentive as well.