I am a big fan of seafood and am always looking for someplace new to eat – so when the folks at Mitchell’s Fish Marketit contacted me about trying some of their new menu items – I was all for it! 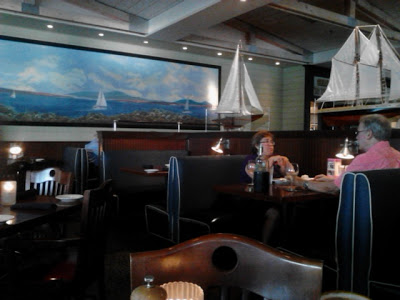 I did head to the Newport location because I was given their manager’s info. We got there pretty early on a Friday after work so it wasn’t busy at all. The decor is “fishy” and lots of warm woods – it’s very “fancy Red Lobster” as Larry put it. 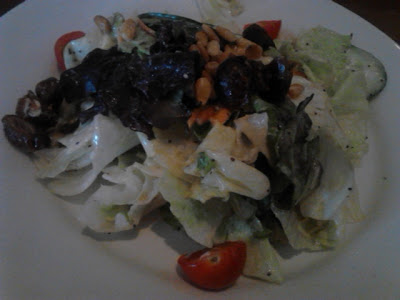 I got a House salad (Carrots, cucumbers, cherry tomatoes, dates, pine nuts, poppy seed vinaigrette) with my meal. The vinaigrette was really good – not too tangy and a bit sweet – I really liked it (I don’t usually like them). I thought the dates were gross though – not a fan! 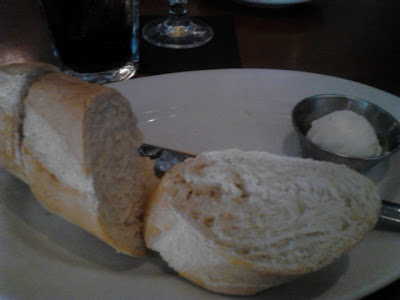 We also had fresh bread and it was great – very warm and crispy! The butter was hard (booo!) 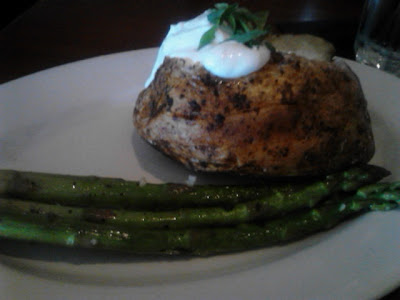 This was the tater & asparagus that came with our meals – they were fine. The asparagus was a little underdone but the potato was great – I love the salt they rub on the outside. It was a perfect baked potato!
They also have a 3 course prix fixe special going on for fall – with 3 choices of meals starting at $19.99. The key is STARTING – so it’s not really prix fixe – since each one is different – but oh well – it’s still a good deal. Because of that – I went for the Snow Crab ($29.99) with salad, entree and dessert. 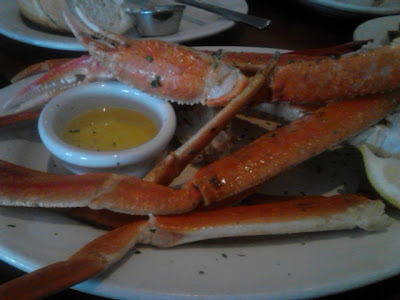 The Snow Crab was good – but it was hard to get out and not really sweet. They did have decent utensils to help out.

When I ordered this one – we asked the difference between the Snow and King – the server said the King was bigger and much sweeter. With that Larry decided to get the King so we could compare. 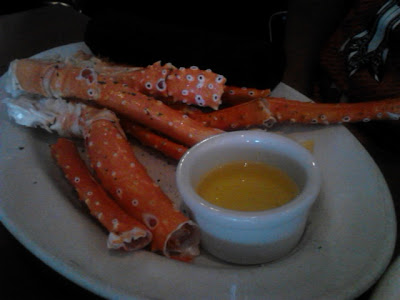 The server was dead on – the King was MUCH sweeter and easier to get the crab out. We both preferred the King to the Snow…
Why Should You Go? Mitchell’s was a nice dining experience and is a step above Red Lobster. While that might be a joke to some – it’s really true. There’s a little more space, it’s a little pricier and the experience is a little more special all around. Is it heads and tails above? No…just a bit nicer all around. It was nice to try the two styles of crab bite-to-bite. I would definitely say it’s a good option and probably one of my favorite at Newport on the Levee because it’s one of the only non-burger places!
Thanks to Mitchell’s for the gift card – that new prix fixe menu is a nice all-around meal option!