Today we take a slight departure from food to let you in on a secret – DAYTON DRAGON GAMES ROCK! My friend has season tickets (there is a big wait list) and the Dragons were playing my Cedar Rapids Kernels!!! This is sort of a “game in pictures” blog… 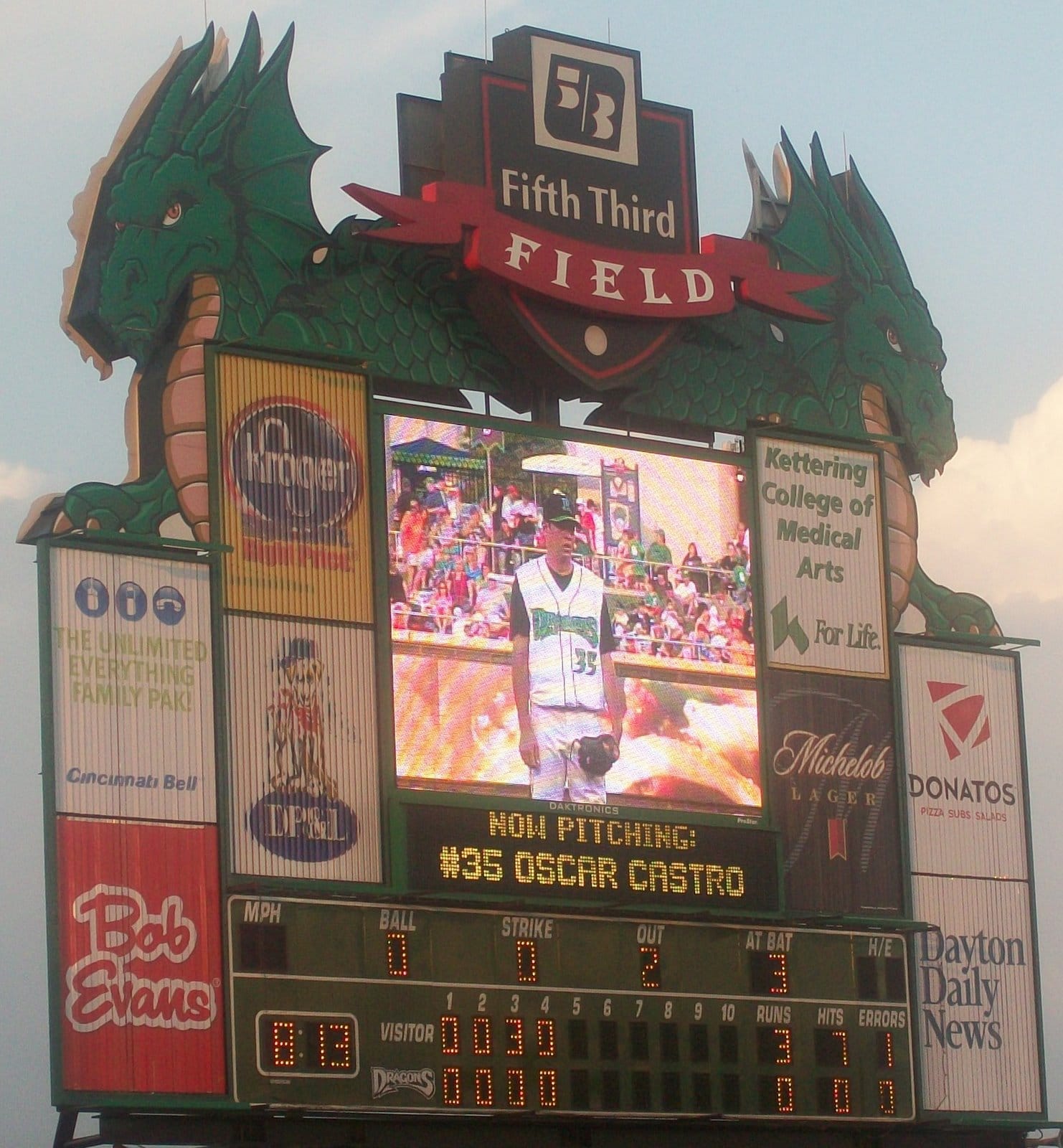 Now THAT is a scoreboard. If the Dragons get a home run or win – the eyes light up and smoke comes out the nose! (Spoiler Alert: I didn’t get to see that.)

Being the forgetful food blogger I am, I forgot to take a pic of the nachos. It was raining though – I was distracted. One mexican food booth though has AWESOME nachos with beans and all these toppings!!!! Not just the crap with the cheese goo – THESE ARE NACHOS! 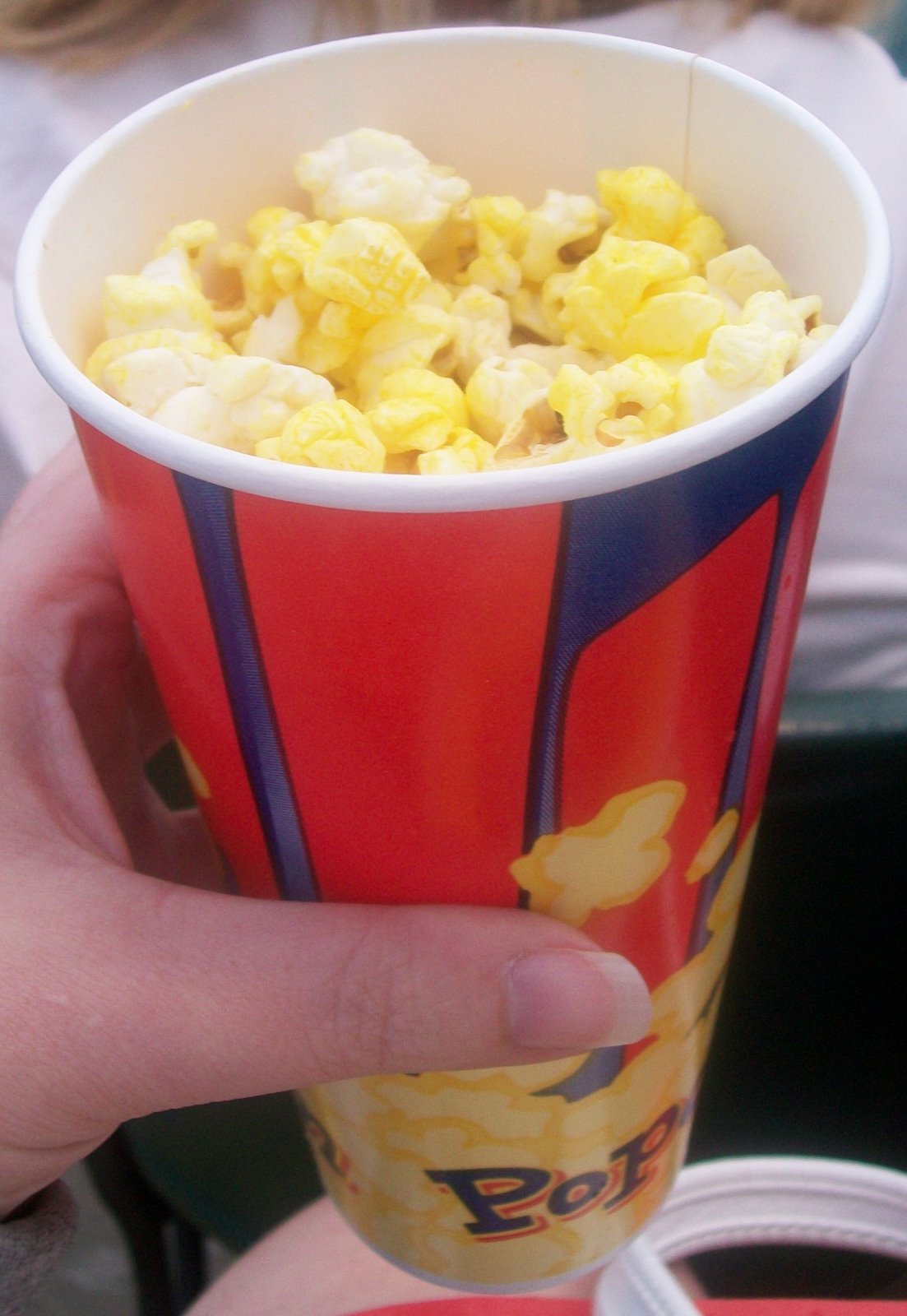 Popcorn brought to me for a buck! 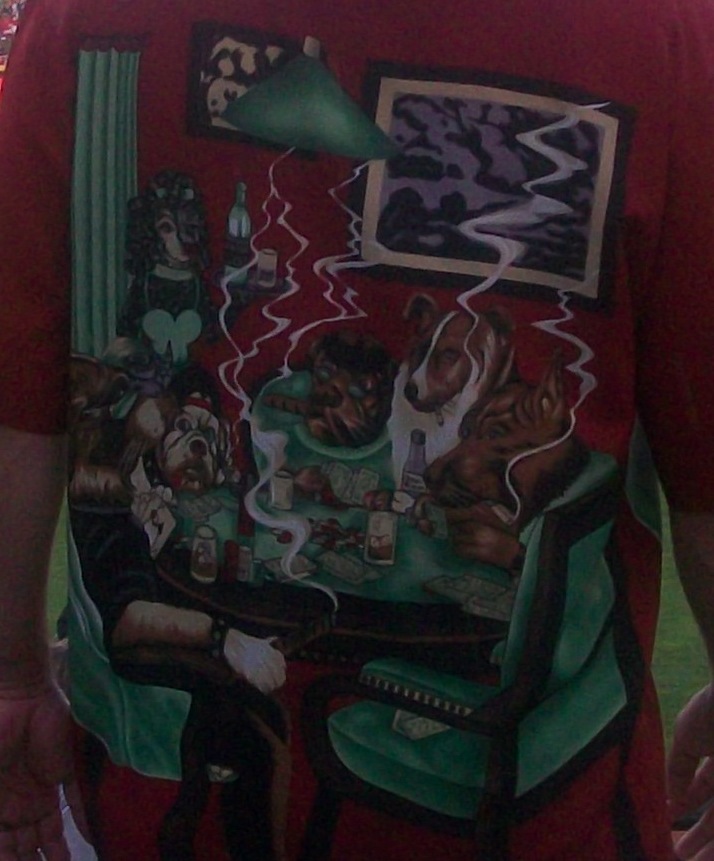 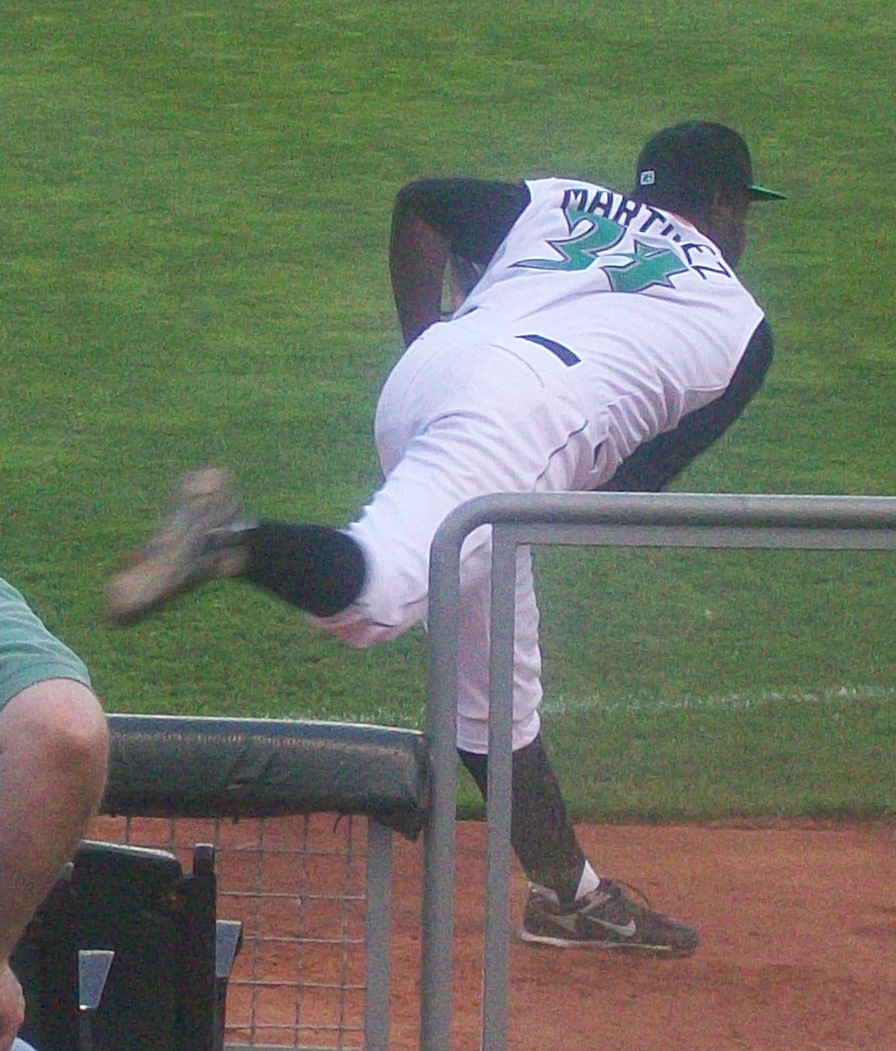 We were on the 3rd base line and got to see the pitcher warming up! 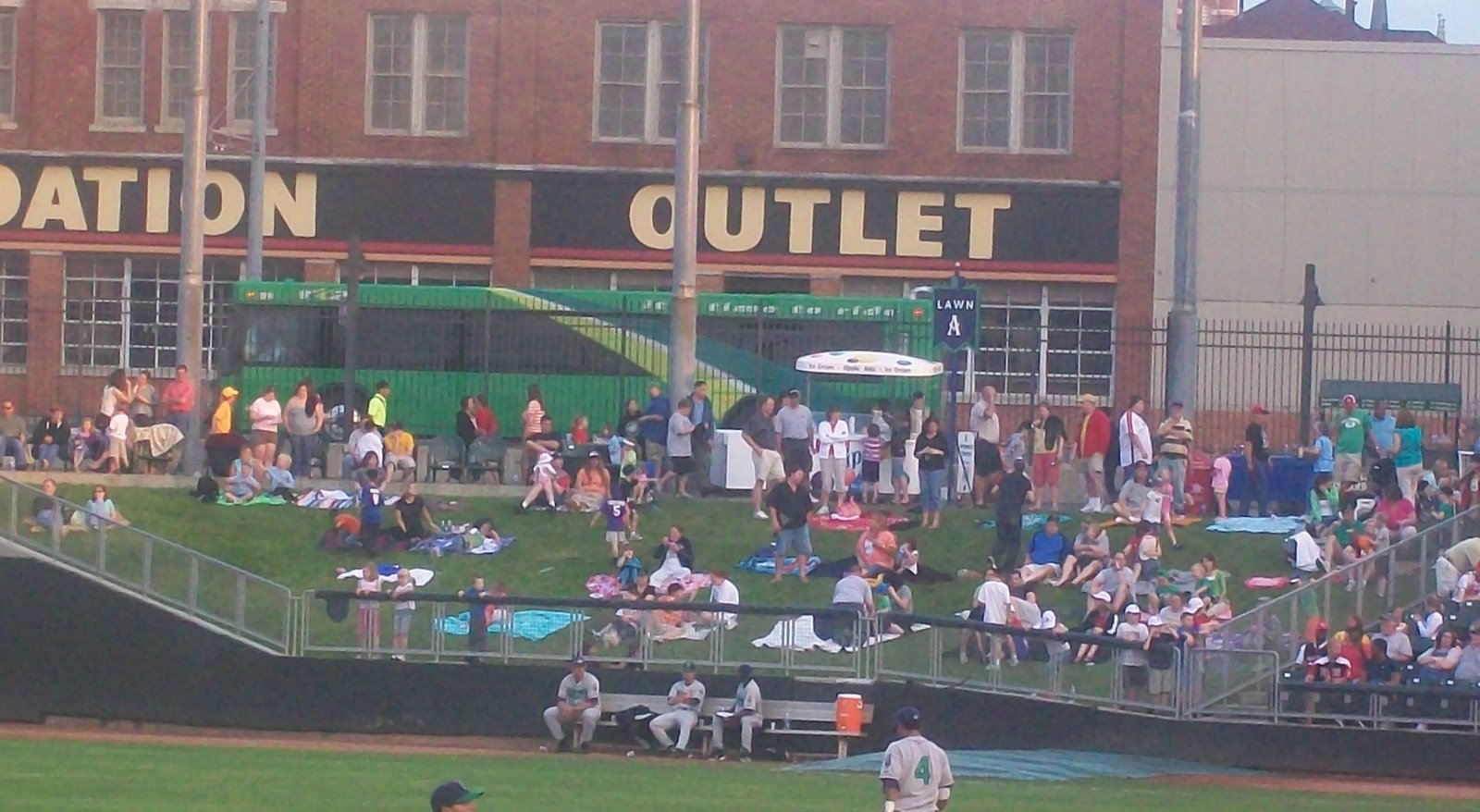 Lawn seats are available on game day for $5 – that’s the best way to get a ticket since they’re sold out! 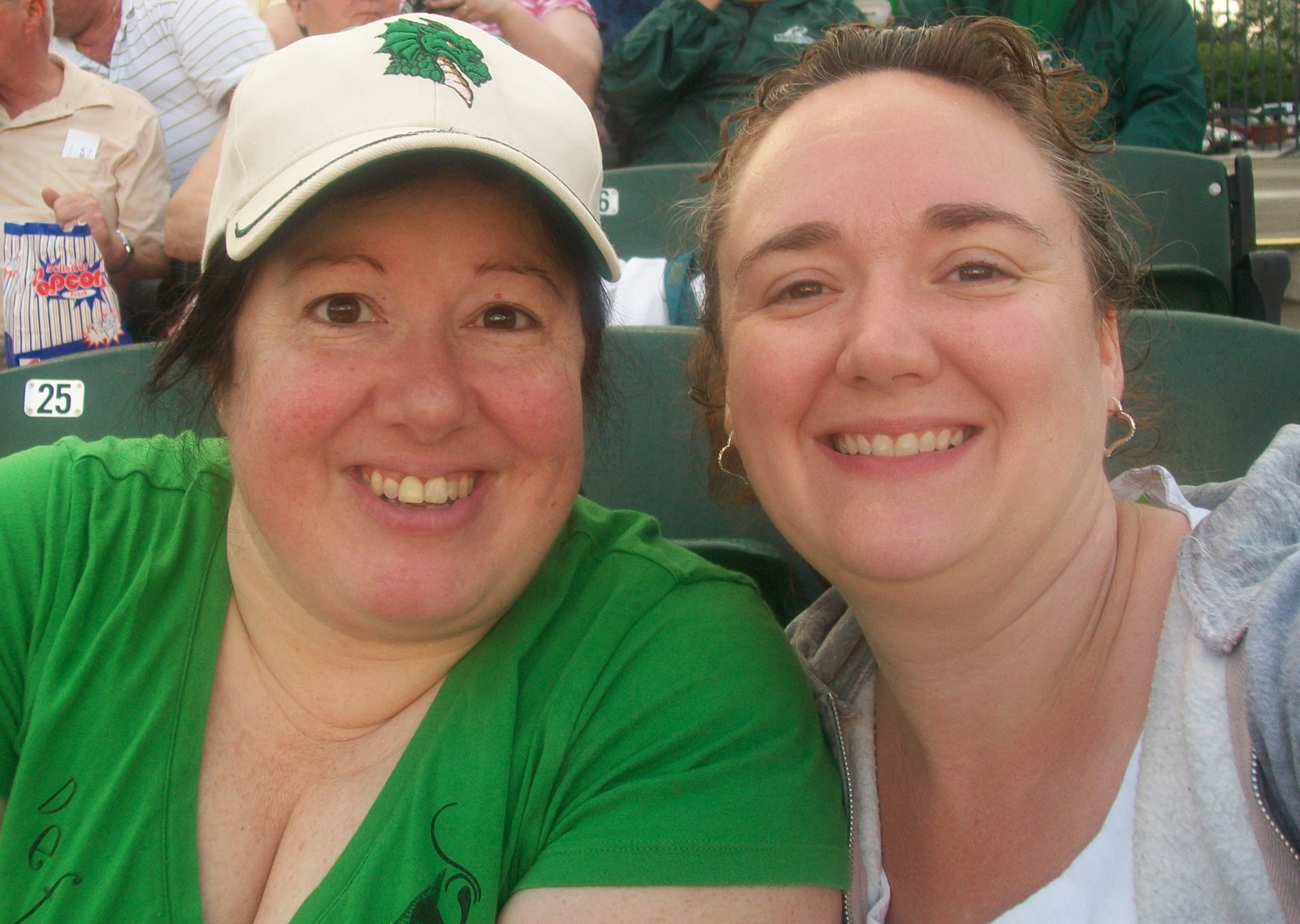 Food Hussy with her friend (and season ticket holder) Julia! 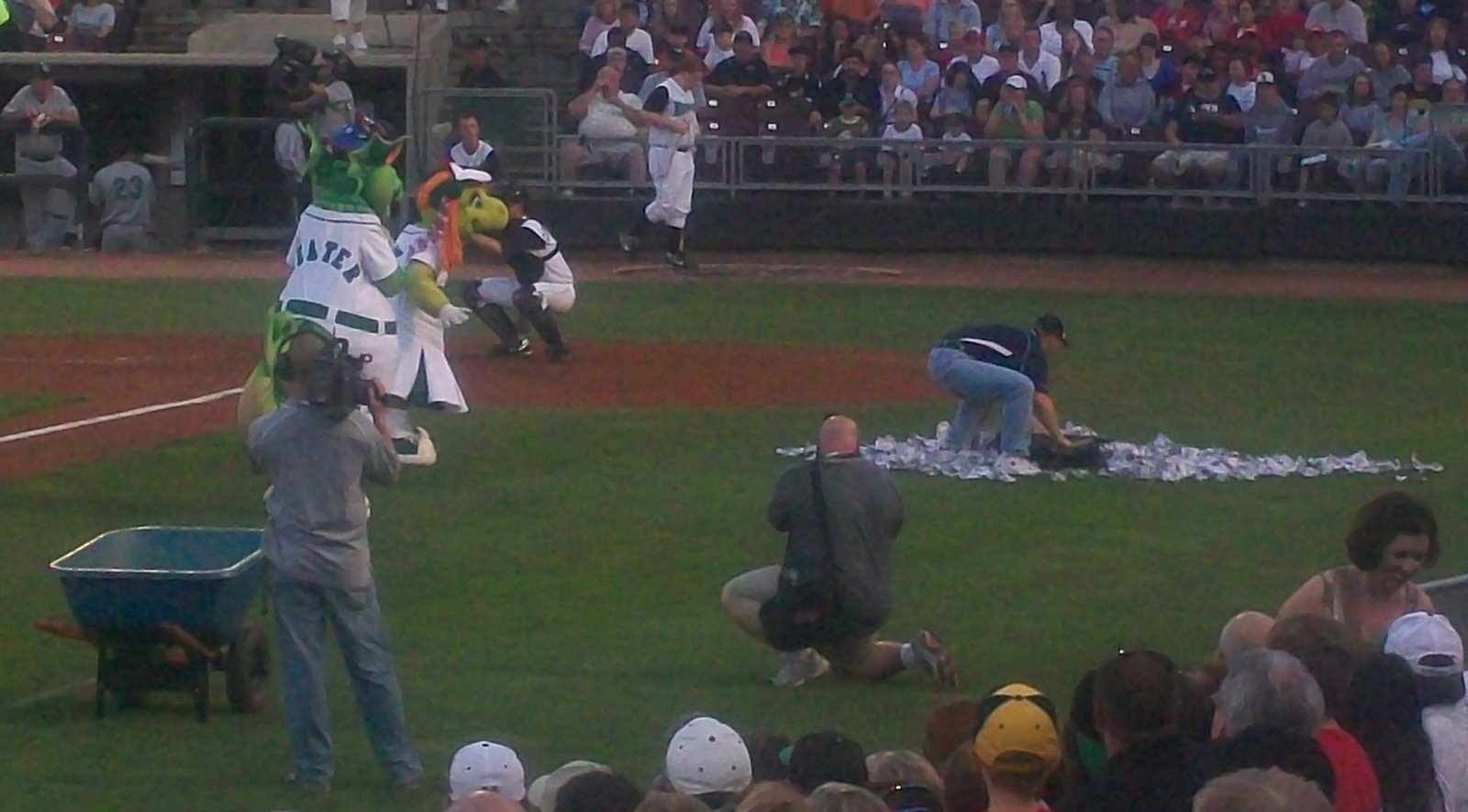 Minor league games are great because they have lots of activities going on! This is a scoop for cash – whatever he shovels up in a certain amount of time – he gets to keep! 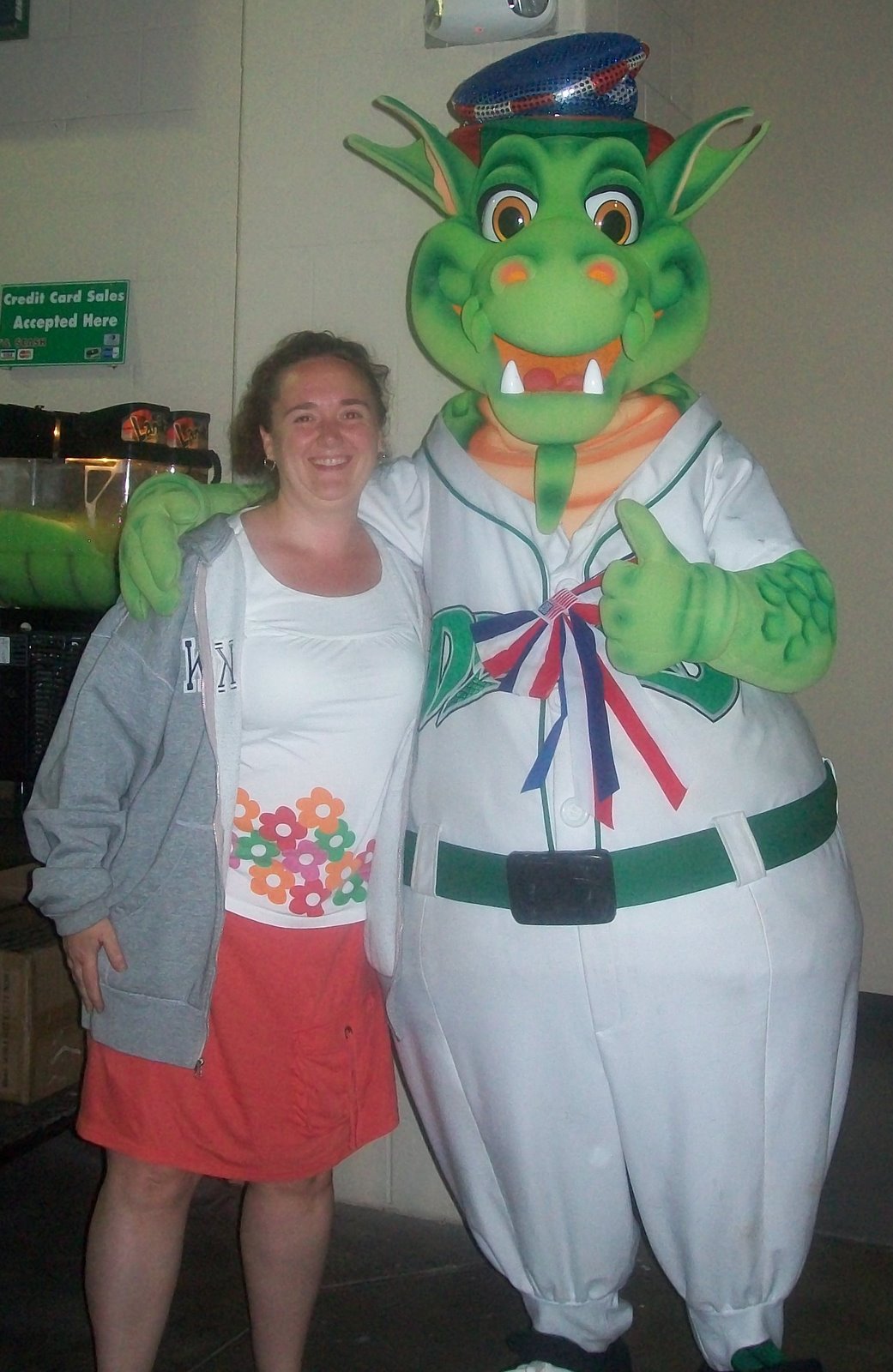 Here’s another view of the park from the other side of the stadium. 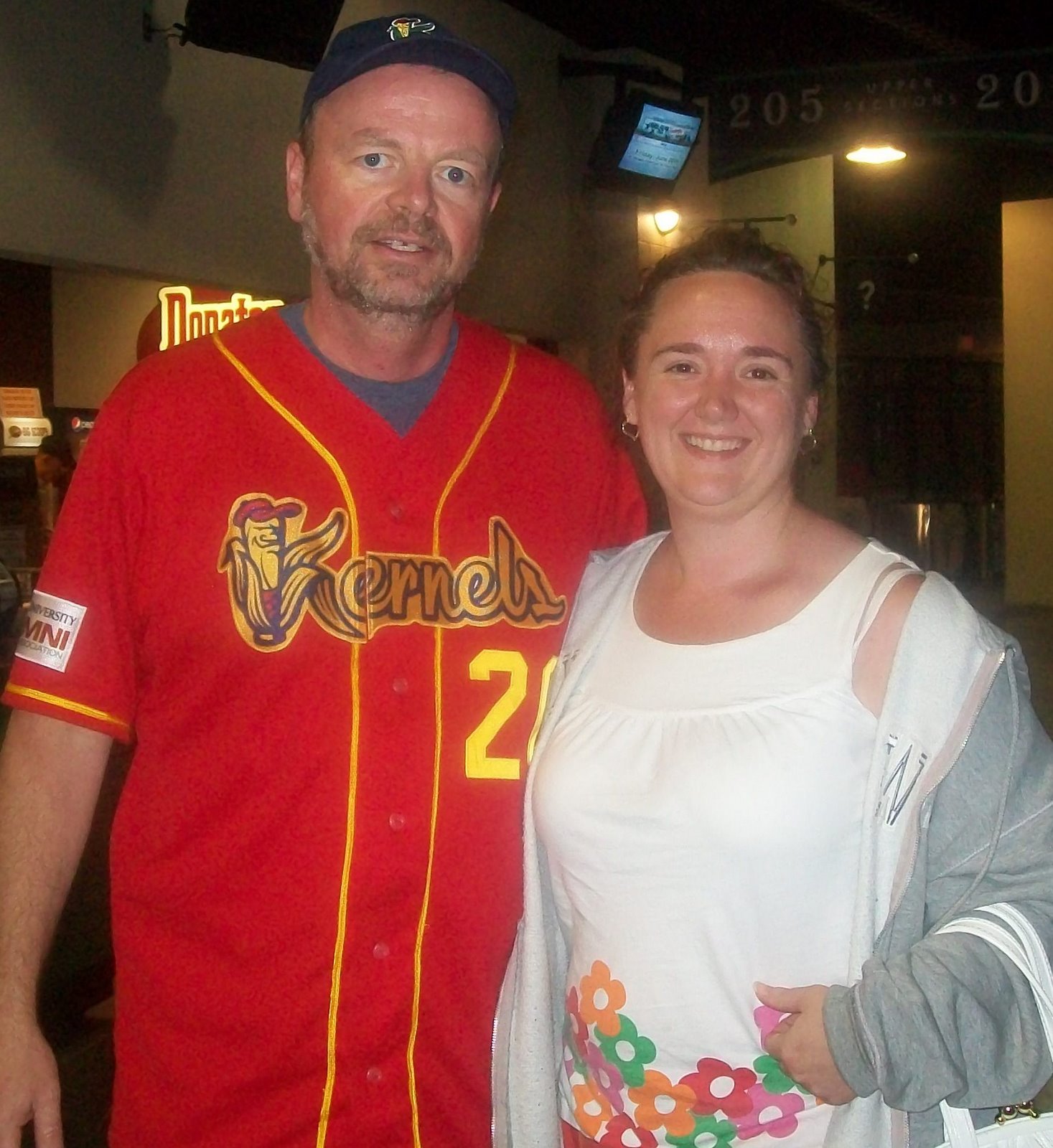 While walking around the park I found a Kernels fan! He’s from Cedar Rapids and is a host family for one of the players. I’ll even forgive him for wearing a modified ISU jersey (GO HAWKS!). 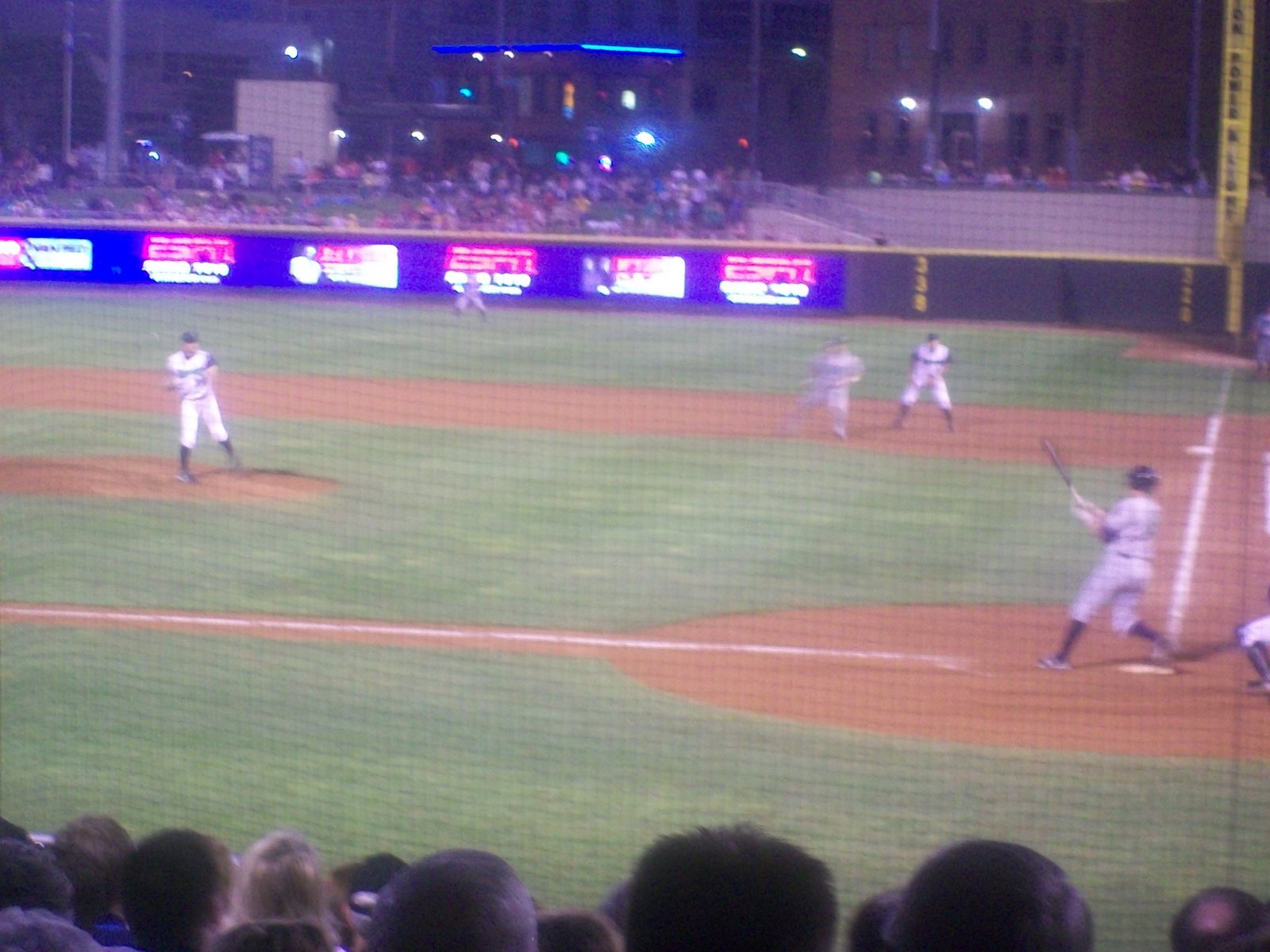 After a while we moved over to some open seats behind home base…awesome seats! 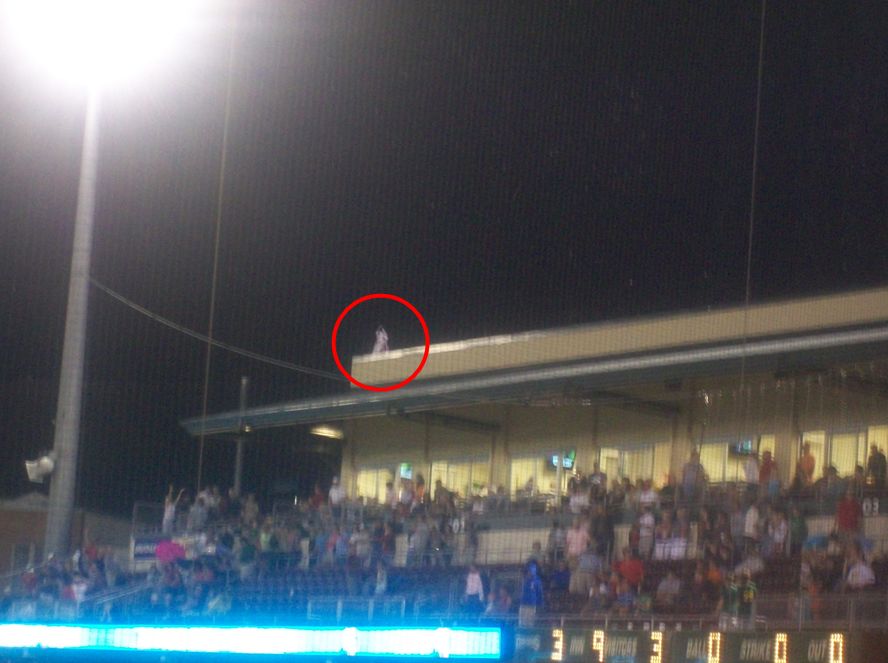 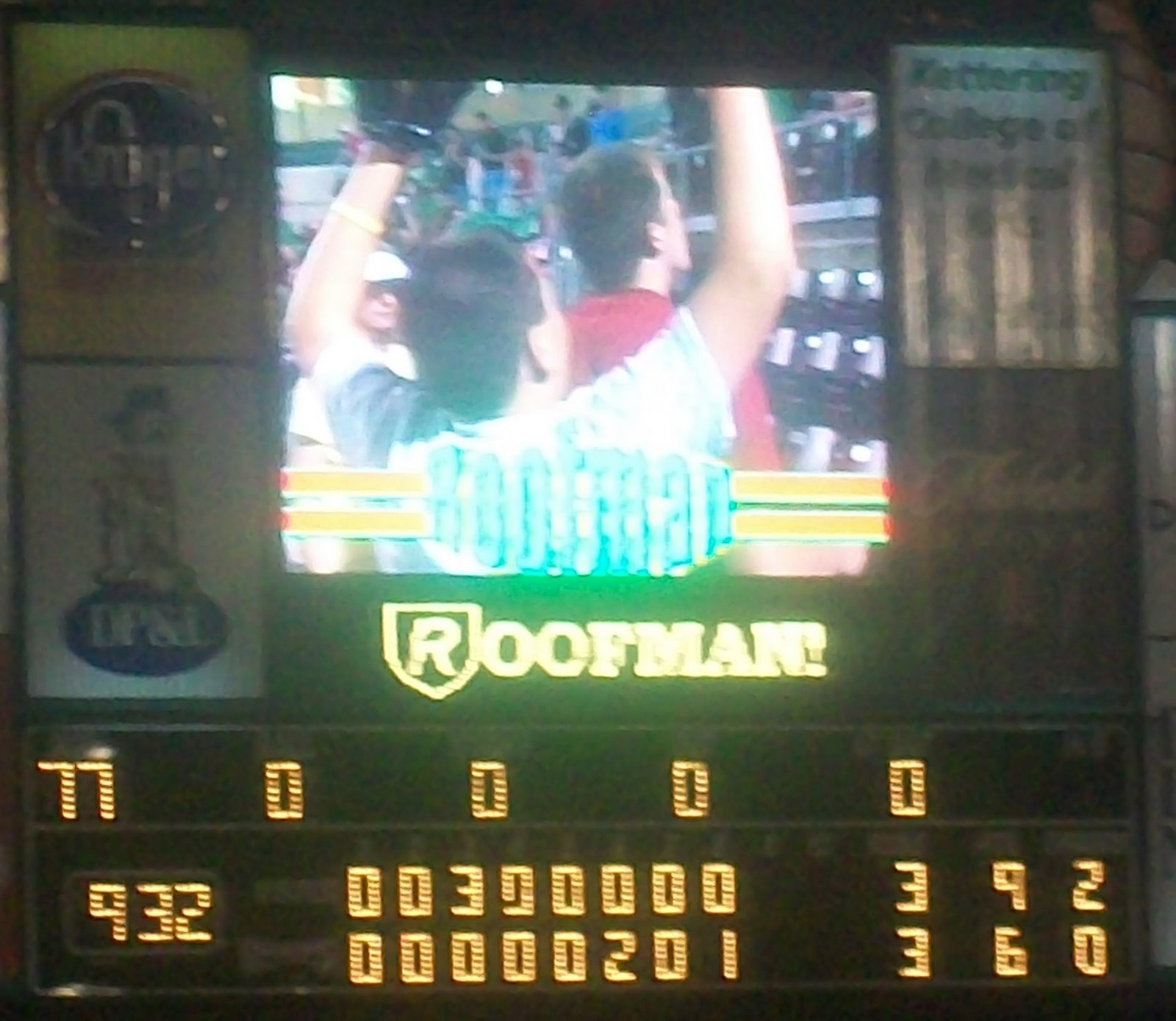 Yes – Roofman! They have a dude that runs around the roof and throws down t-shirts. Like I said – lots of fun! 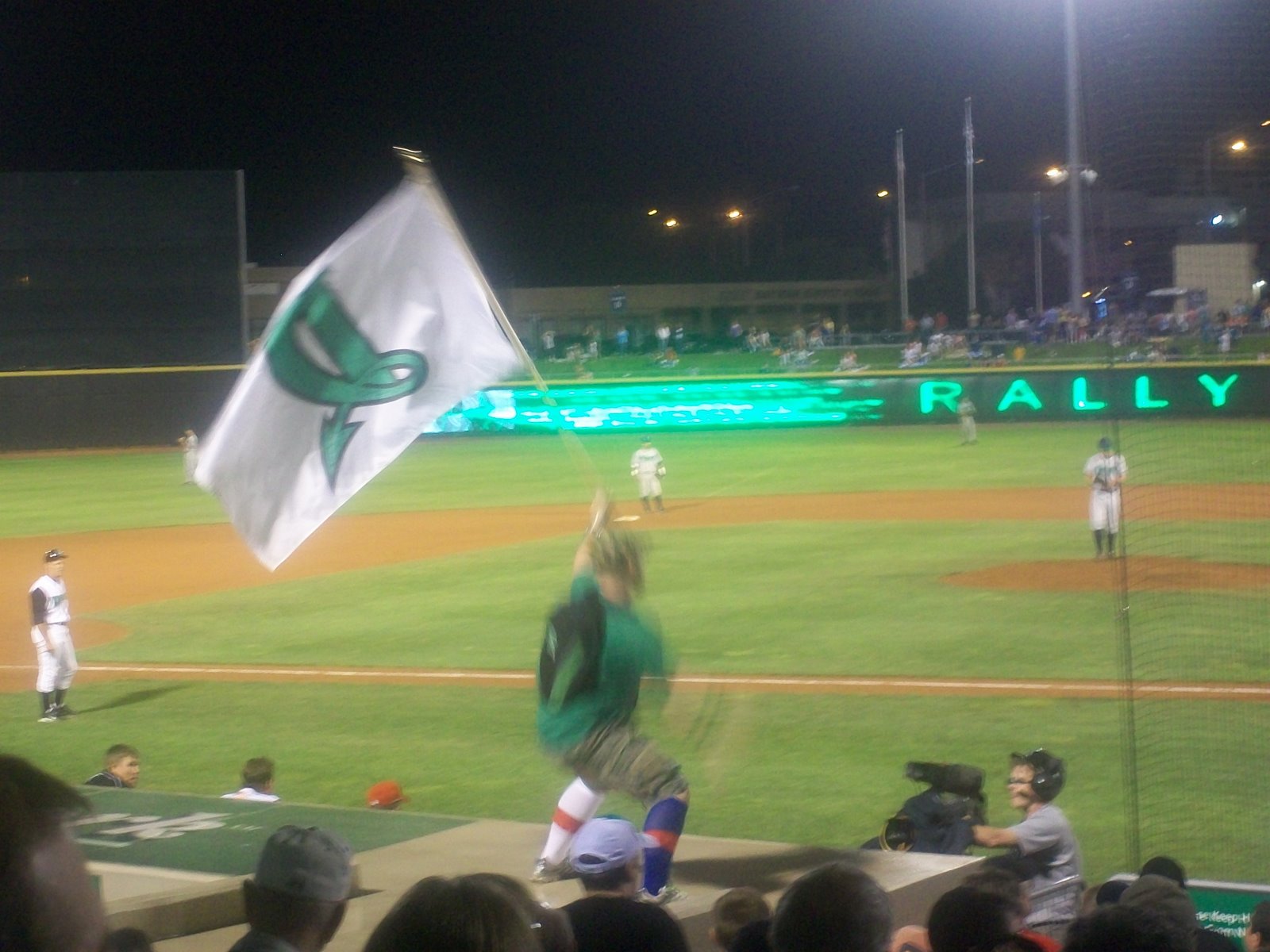 The Green Team gets the crowd going and cheering! 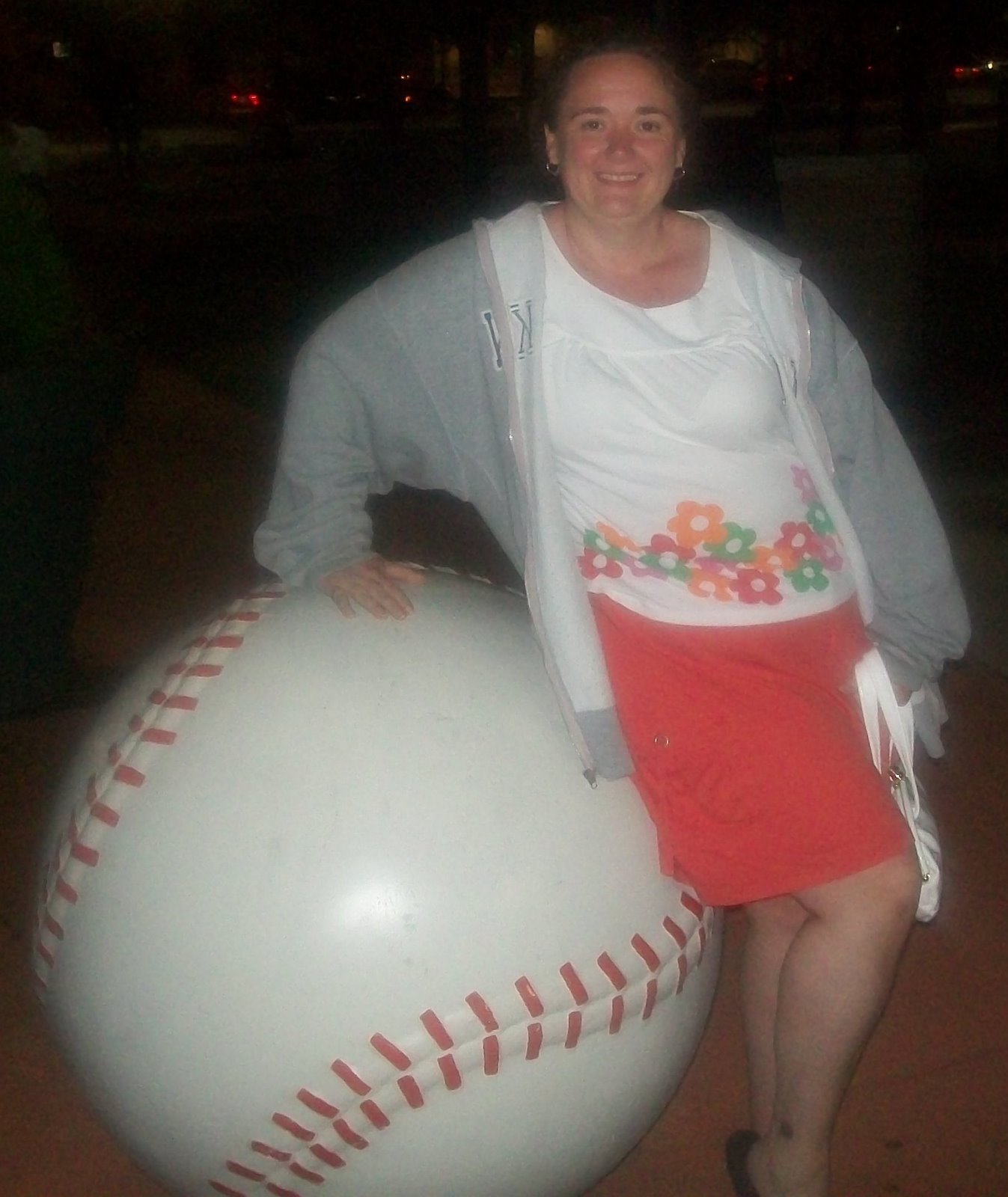 And here I am outside the park leanin on a ball…whew…it was a big night!

What did I leave out? Lots! There was the impossible challenge (you try eating 6 saltine crackers in a minute – it’s a great party game!), tennis balls at the end thrown into kiddie pools for free tickets, little kid dancers throughout the game, tons of food, cotton candy and beer and oh so much more!

My advice: get on CraigsList and find tickets to an upcoming game! It was a blast!