I’ve heard lots of peeps rave about Tom + Chee – I had only been once when it was on Fountain Square and wasn’t too excited. So – I decided to give it another shot – and see their new physical location on Court Street. 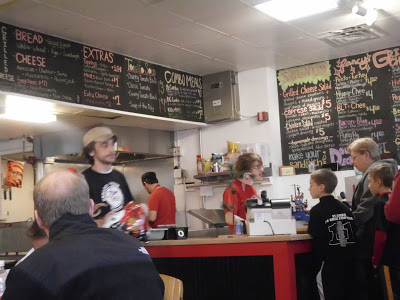 The menu is up on boards around you when you walk in and is pretty overwhelming. I know this is popular – but when your menu is this big – it’s hard to make a decision when you’re standing in line with impatient customers. 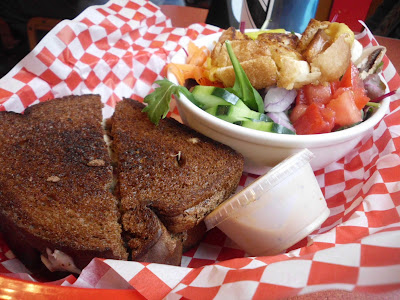 I was with a couple of friends and it was a week ago – so sadly I don’t remember what this is. But Ryan was pretty happy with his lunch and I have to say – their Grilled Cheese side salad ($5 on it’s own) looked awesome! So many veggies and chunks of grilled cheese groutons! You can’t go wrong there! 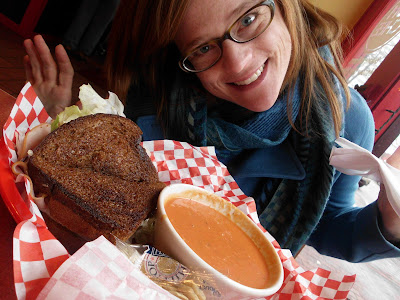 Beth, my gluten-free friend was rebelling and going for the gluten with her sandwich (again – don’t remember) and the tomato soup of the day. She also was happy. We were noting that the sandwiches are a bit greasy… 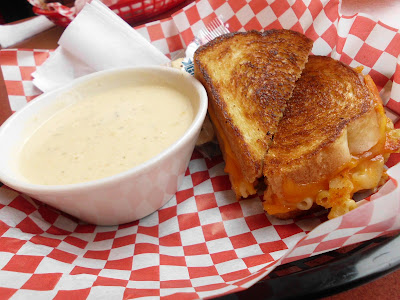 The soup was a huge standout! I’m not usually a fan of soups that don’t have chunks in them – this was fairly pureed with little specs of broccoli throughout but it was DELICIOUS! I would go back for this soup for sure! And I might get that salad that looked so awesome! 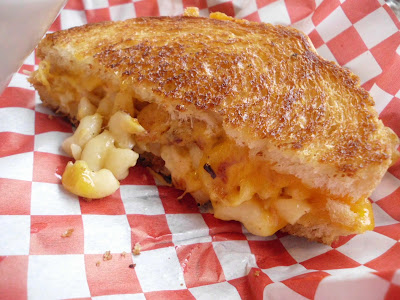 Yes – looking at that again, I think my arteries are hardening as we speak.

Why Should You Go? Well – again – after a second try – I’m not a huge fan. It was fine – but probably not a place I would choose given the chance. The soup was really great and the salad was big! This location is also VERY busy during the lunch hour – so expect some awkward time giving people the stink eye so you can get a table.