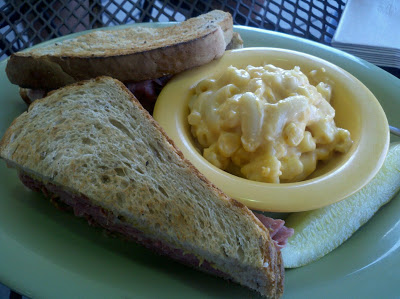 I went for a pseudo-reuben with a side of mac & cheese. Their menu is really big and one of the reasons I’m not a fan is that standing at the counter ordering is daunting. I need time to think about what I want at someplace that offers a lot of options – so I always feel rushed.

But the sandwich was fine – I would have liked the bread to be toasted a bit more. The meat and cheese were good but I didn’t like the mustard so much. All in all though – I liked the sandwich – wouldn’t get that one again – but it was fine. The mac & cheese was really good. I had a horrible mac & cheese just a couple days earlier at another place (it was so bad – I’m waiting to give the place another try before I write it up) so this was AMAZING in comparison. It was thick and creamy and cheesy and really good. 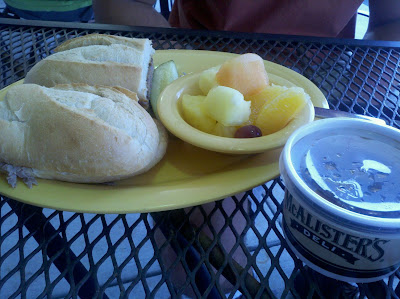 Larry got the dip with a side of fruit. Now I hate hate hate soggy bread so I never get the french dip. Really it kinda grosses me out – dipping bread in juice. Yuck! But Larry was enjoying it and offered me a bite. So the reviewer in me begrudgingly tried it. It was actually good! The au jus really added flavor and didn’t soggify the bread! I was pleasantly surprised.

And yeah – he got fruit as compared to my fat-laden mac & cheese. Bastard! Always trying to eat healthy in front of me – what’s that all about?! (Not really – he just doesn’t like mac & cheese that much.)

Why Should You Go? Well – it’s fine. It’s a sandwich place but they also have salads, soups and baked potatoes. It’s not amazing – but it’s not bad either. Good, standard chain. It’s probably better if you don’t have to hear the chant every day for 6 months. MCALISTERS MCALISTERS MCALISTERS!! (Calgon – thanks for taking me away!)