Larry and I were headed to visit some family on the west side and decided to grab lunch – so I grabbed the handy-dandy Urbanspoon Shake It App and went on the hunt for some place near Price Hill. I came across Happy Days Cafe and it had great reviews – so we decided to try it. How do you turn down someplace with 100% LIKED IT?! 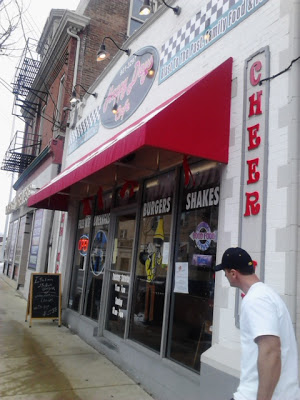 It’s right across from Kroger on Warsaw – there’s no parking lot but there’s street parking on Warsaw or you could park in the Kroger lot and walk across the street. I wanted to be sure to include a shot of the outside because it’s easy to miss.

One look at the menu and you can guess that the owner is Greek – and sure enough – he is! He came over and chatted – so friendly! He’s been in the restaurant biz for quite a few years and now he’s decided to open his own place. It’s been open for 6 months and they’re looking forward to more of YOU coming to see them!

The menu isn’t all Greek but there are some items such as gyros as well as the owner’s Yaya specials from his mom’s recipe book – those are next on my list to try. They also have a great breakfast menu…but today – was burger day! 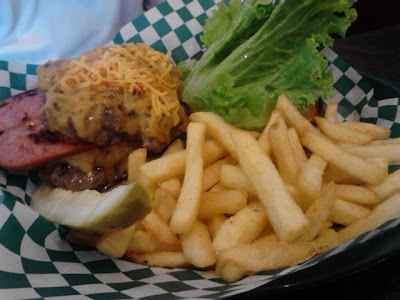 This is the Fonz. It’s 2 patties with cheese, a mett and a whole bunch of other crazy stuff – and it was AMAZING! This was Larry’s choice – they have a “make your own burger” pad that you fill out – but he saw this and decided he had to try it. It was amazingly messy and delicious! Plus – affordable! He doesn’t even really like metts – but he loved one on this burger.
Larry did make the statement that he liked this as much as Terry’s – and here – you don’t have to deal with crazy lines! YET! 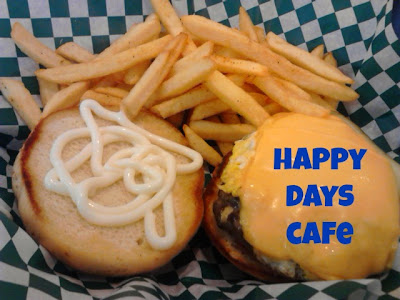 I decided to make my own burger so I got an egg and american cheese on mine and it was also delish! We did realize after devouring these tasty beast burgers that we could have shared a fry rather than each ordering one.

When chatting with the owner – he mentioned that “the nice lady from the paper” had been by and liked the burgers as well – and sure enough Polly has been there and agreed with our thoughts on all counts!

Why Should You Go? If the burgers are any indication of the rest of the menu – it’s a must-stop place! The burger was tasty, juicy and just plain fantastic! The meat does have some added spices to make it Greektacular and it is. The prices are great and it’s a new, local business – so you should definitely go!

After lunch and our family visit – we decided to pull out our favorite History Channel App and see some historic places in the ‘Nati. 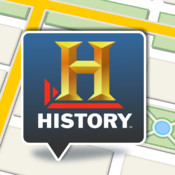 History Here is a pretty cool app that we used when we went to Kent State to visit my sister. We were pulling up a variety of historic places along the way. So when we got back – we decided to see what history we had right here!

There were all of the obvious places – Taft Museum, UC, etc… but we were going for some of the lesser known places. 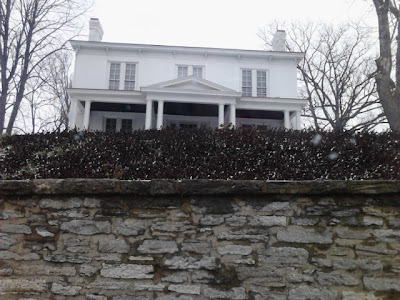 This is the Harriet Beecher Stowe House – the weather was bad and we didn’t have a ton of time – so we just did drive-bys. Pretty cool to know things like this are around. Stowe wrote “Uncle Tom’s Cabin” which had a big impact on slavery and the Civil War. We had just seen Lincoln a few days before – so we read up on it on their website. 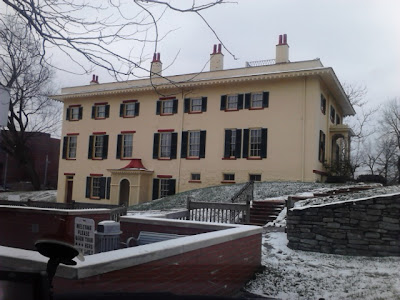 Next up was the William Howard Taft National Historic Site – this is part of the National Parks system and they offer tours as well as programs. Besides being our 27th President – he was Governor of the Philippines – who knew?! 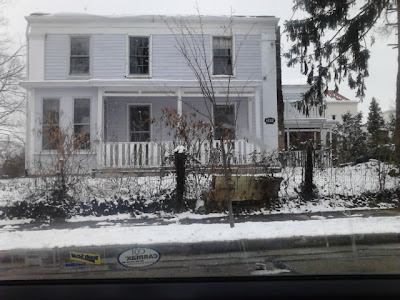 Last up on our tour was something just a few miles from our house – the Samuel and Sally Wilson House. This is now a private home – so I’m sure they love the slow drive-bys and picture taking that randomly happens – but hey – it’s on the NPS website…so I’m allowed – right? This home was used on the Underground Railroad – so much so – they actually had to cut back because it was so well-known.

The app doesn’t have a TON of items in the Cincinnati area and really has none in NKY – but it was fun to drive around and see some new historical places around town.

So find some time this weekend to get a great burger and visit something new in our city!