I’m always amazed with all the food bloggers that Cincinnati has that I can still stumble upon a place nobody has reviewed. And such is the case with Clough Crossings. That’s probably because a lot of the bloggers are into the downtown scene – I, on the other hand, will actually go to Anderson! (Yeah for Anderson!). 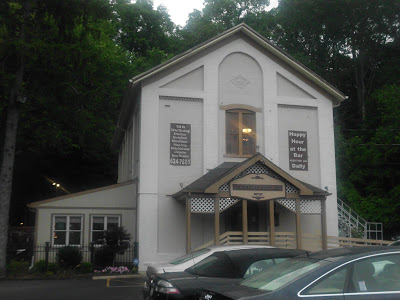 Clough Crossing is on Clough Pike which is so easy to get to from the Cincinnati East Side burbs (Mt Lookout/Hyde Park/Oakley) – you just hop on the Beechmont Levy, take the exit for 32, then hook a right up the hill at this odd wanky intersection onto Clough Pike! And you’re there…it’s only 10-15 min away.

It’s just past Jean Paul’s Paradiso – which I’ve been bragging up to everybody who will listen. Rather than in a strip mall next to a gas station, Clough Crossings is in an old school house. Very neat building. They have a deck out back – which we were hoping to sit on – but it was a bit rainy. 🙁

We had a Groupon and made sure they were okay with us just having our iTouch instead of a paper copy and the host said that was fine and was very accommodating (some of the Urbanspoon comments indicate otherwise – so I wanted to point this out).

Larry got a salad with his entree and it was pretty standard. Early notice – they are fond of the shredded mozzarella. The vinaigrette was really tasty though ad he ate all of his salad – which is pretty unusual.

Clough Crossings is definitely an old people restaurant. We were the youngest people there (save for a bored out of his mind 9 year old with his parents and the couple they were with) by probably 15 years. But sometimes old people food is fine. 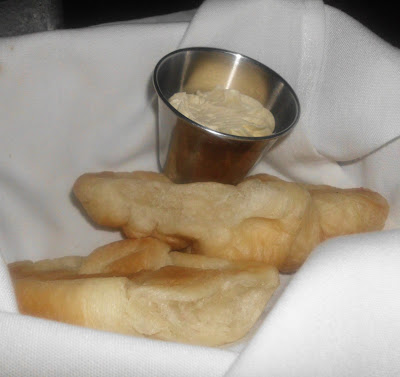 The server was a bit dingy – but very friendly. She started us out with croissants. At least that’s what she said she was bringing . These were more like crescent rolls but they were good. And the butter was soft – something I always appreciate! 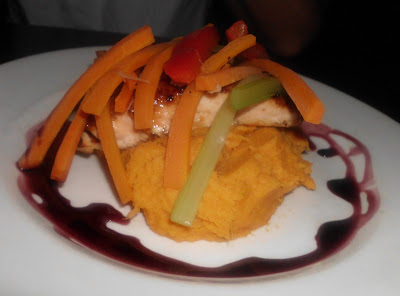 Larry went for the Carmelized Salmon ($18.95) which was served over sweet potato mash and topped with julienne potatoes and a honey merlot glaze. The salmon was good and the potatoes were REALLY good. It could have been served a little hotter but it had a good flavor and wasn’t overcooked.

I’m seeing a trend with restaurants that food isn’t really hot (temperature not spicy). It’s kind of annoying – I understand with things sitting and waiting for servers – it’s not easy to do – but most food is best when it’s hot. 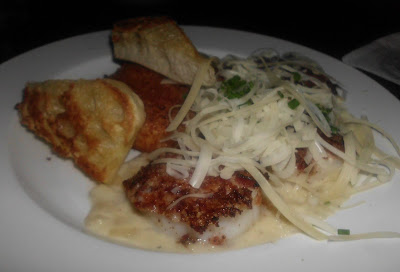 I got the Bacon-Encrusted Scallops ($13.95) mainly because they were served with fried cheddar risotto (and topped with a sweet onion cream sauce). Let’s take this apart:

* Came with two hunks of focaccia bread – fine, bland, could have used some garlic salt
* Fried Cheddar Risotto – all the cheesy fried goodness you would expect. Very heavy – came out the size of an Izzy’s potato pancake! Would be better served as two smaller medallions.
* Bacon encrusted scallops – they were fine. The scallops were cooked correctly – but I was thinking bacon-WRAPPED vs. ENCRUSTED (my bad on reading it wrong). The bacon didn’t really lend anything to the flavor (which is odd) and I mostly scraped it off.
* Topped with shredded mozzarella???????? This had no place in the dish and just covered up the scallops. I love cheese but this I didn’t love.
* Sweet Onion Cream Sauce – I was a bit skeptical but it was nice to have something to dip the scallops in once I removed the flavorless bacon and unnecessary shredded mozzarella.

The other point of this dish is it had TOO much going on. It was just a very odd plate of food. I ate about half of it. That’s something I’m really trying to retrain my brain on – if I’m full – STOP. That whole “clean your plate” message is still in my head – even though I’m nearly 38! 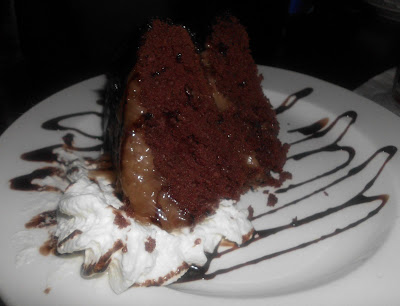 When I have a Groupon – I’ll typically splurge a little on an appetizer or dessert since we’re getting a deal. I asked the server before I ordered what they had on tap for dessert and she got to the words “German Chocolate” and I stopped her and said “I’ll take that.”

It’s my favorite – I never ever get it – so I was very excited. I ordered something from the sandwichy portion of the menu so I’d have room for the cake. (That fried risotto was a beast – it was good but I left over half of it because I knew the cake was coming.)

The cake was shockingly normal and moist. My friend Lou always hates how when you just want a piece of chocolate cake restaurants muck it up by adding fruit or other things – that girl just wants PLAIN CHOCOLATE CAKE. Well – this had German Chocolate frosting but other than that – it was pretty plain. But I liked it! I was really just in it for the frosting – so I ate the cake with frosting and left the rest.

Why Should You Go? Be prepared that it’s kind of an old people place as I mentioned. (My friend Kelly’s Dad takes her there – now Bobby’s not really old – so I hope he isn’t offended when I say that – haha – Hi Paula & Bobby!) The food is pretty good – is it great? No. But we both liked portions of our meal and it’s a nice place. The booth was very private – even though there were other folks dining nearby – so it was kind of nice for a date night. I bet the deck is great as well.