We headed out last weekend on the Original Cincinnati Brewery Lager Tour presented by the Brewery District CURC. 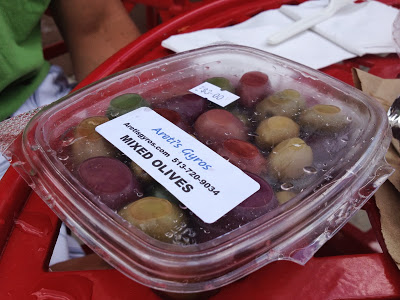 Since the tour starts at Findlay Market – we stopped at Areti’s Gyros for some lunch. Larry wanted these olives for some reason. I asked if he was pregnant. He didn’t laugh as much as I did. They were good – all had pits – but tasty nonetheless. 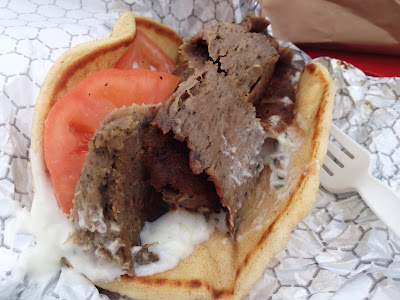 Then we each got a gyro – they were really huge! I still like Greek to Me better but it was a good lunch. 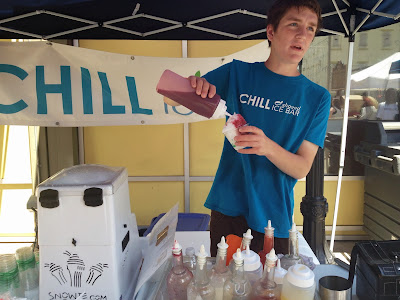 Larry is a kid at heart and really cannot pass up any sort of fruit-flavored ice drink – so when we stumbled on Chill Shaved Ice Bar. The interesting thing with Chill is that all their flavorings are all natural! 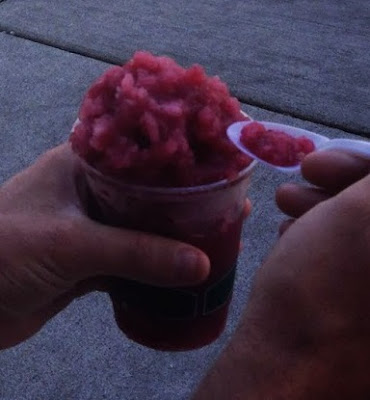 Larry got a berry flavor and the Chill guy LOADED that ice up with syrup! It definitely hit the spot on a warm Sunday afternoon! 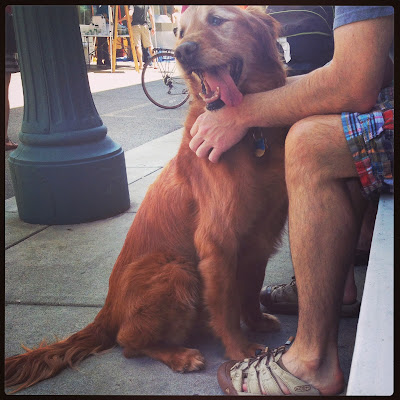 While waiting for the tour, we came across this guy – I think he wanted some of Larry’s icee. He was sooooo cute! It took every bit of will power to not scooch over and maul him with hugs and kisses. 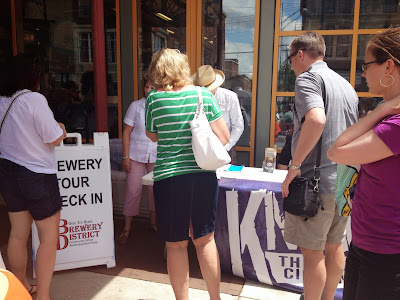 The tour meets at the Findlay entrance by the Bier Garten outside of Dojo Gelato. After meeting up with the group – we headed down the streets of OTR to learn and explore the breweries of pre-Prohibition Cincinnati! 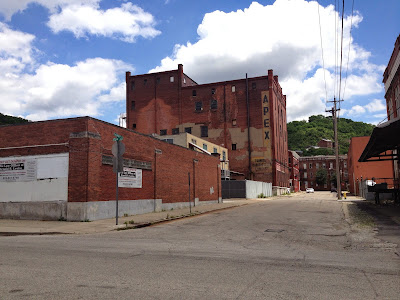 Just a few blocks down from Findlay is the old Moerlein brewery. There are numerous buildings and one of them has a new brewery starting up! We also saw a transvestite prostitute come out of the alley while we were learning about the district. Ahhhhh OTR. 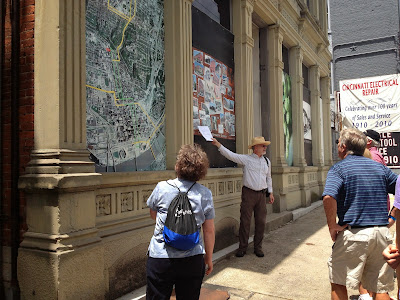 This was the head office for Moerlein Brewery back in the day – really beautiful building.

This banner was on the front of the building – gotta love that! They also gave props to all the local breweries that have popped up and mentioned the two we have visited – Mt. Carmel and Rivertown! 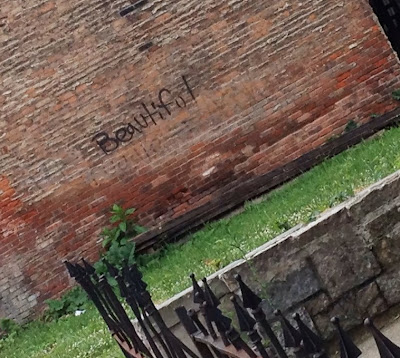 I was really taken by this little bit of grafitti on the building next door. Even in the midst of buildings boarded up and transvestite prostitutes – you can see beauty in so many things. These old buildings are striking and definitely beautiful. 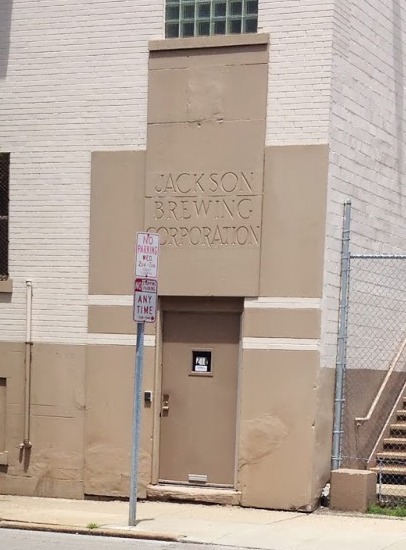 We learned so much on these tours – but I don’t want to spoil the fun. Long story short – Prohibition really screwed Cincinnati. We were the 3rd/4th largest brewery city in the country before – the Germans had taken over OTR and were working in these breweries as well as drinking it all up. Then Prohibition hits – breweries shut down left & right and the area lost their economy. Blergh. 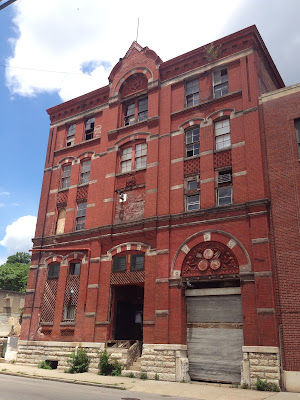 All that said – this tour is so interesting! If you like history or beer – you should go! The architecture on these buildings is amazing and we got to go inside the former Clyffside Brewery! 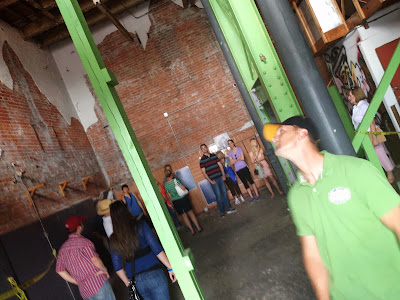 The space is amazing! They tried to sell it off to make condos but the price tag for renovations must have been a bit too high for people to bite. 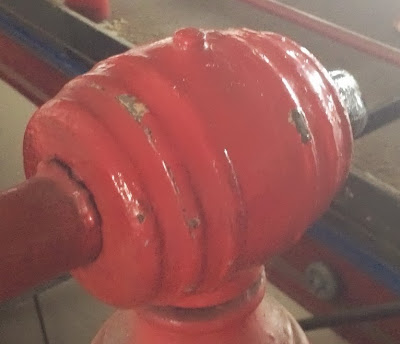 Some of the original brewery touches are still there – like this barrel on the railing. We learned about the history of a variety of breweries as well as more history about the city. 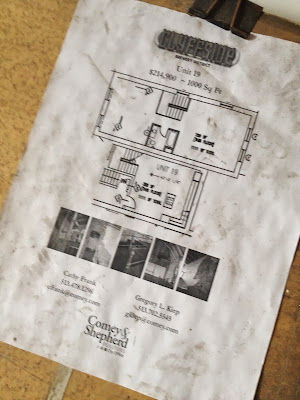 Yes – this 2-floor loft could have been yours for just $250,000 (plus the million dollar renovation!) 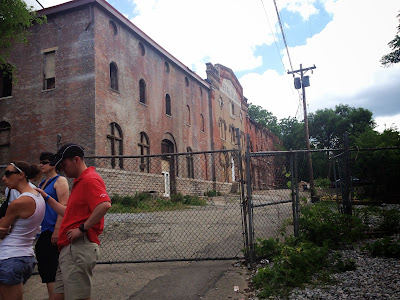 Then the “underground” portion of our tour was about to commence. On a hill behind the Jackson building is this old brewery. 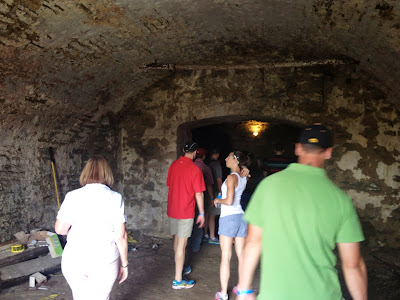 Once inside – we went through some thresholds and then took the climb down, down, down… 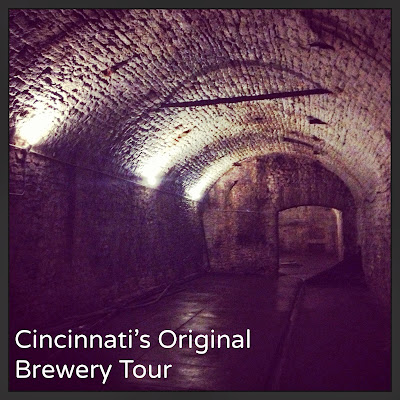 To these awesome 55 degree tunnels! Before refrigeration – the beer was stored in these tunnels. Many of these tunnels have just recently been discovered and have been opened for these tours. 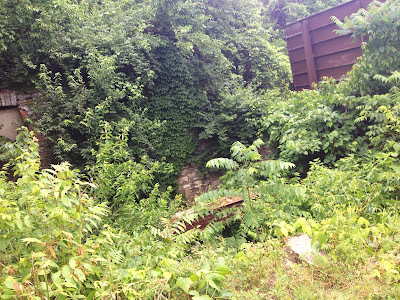 Once out of the tunnels, the tour guide told us this overgrown pile of weeds was once one of the city’s inclines! Larry is a little obsessed with these inclines and is always wanting to find them – so it was good to check one off! 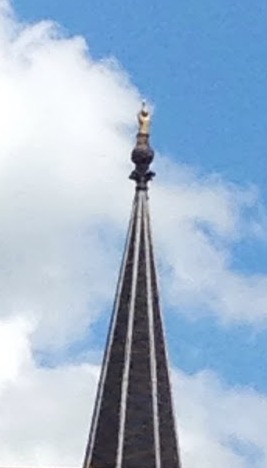 Then on the way back to Findlay – we were told about the church that the Moerlein family established. The finger is pointing up to God – but from a distance – that’s not what we thought! 😉 Look for it next time you’re in the area…