So last week – I was a cooking fiend! I did some menu planning and decided to get started. I did really well – I made 4 of the 5 items I planned to. So first up – the Chocolate Peanut Butter Cereal Bars!
I wasn’t really sure if I would like these – since I don’t like “rice krispie treats” so I decided to make half of the recipe (full recipe below). I got this recipe from the current issue of Everyday Food magazine. 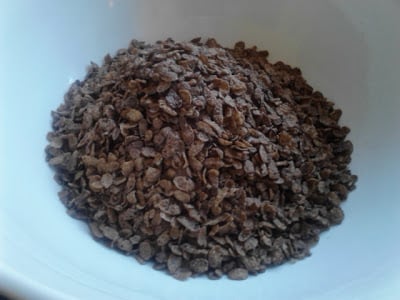 It starts easy enough with a bowl full of Cocoa-flavored rice cereal. I used Cocoa Pebbles because I had a coupon. 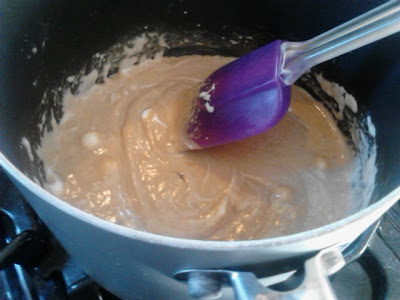 Then you melt mini-marshmallows and peanut butter in saucepan with a little butter. I was a petrified of this step. I was sure the marshmallows would stick to the pan – but they didn’t at all! It was super easy and only took a few minutes. 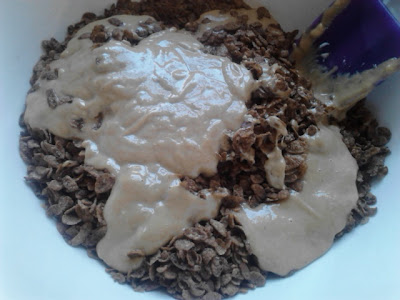 Then you pour the sticky mix into the cereal and stir it up. This is where I encountered a little issue – I cut the recipe in half but think I should have kept the sticky part at full recipe and the cocoa pebbles at half. When I stirred these together – it was just some small clusters and lots of loose cocoa pebbles.

The recipe then calls for chocolate chips & peanuts to be stirred in. I also added peanut butter chips because they are my favorite. 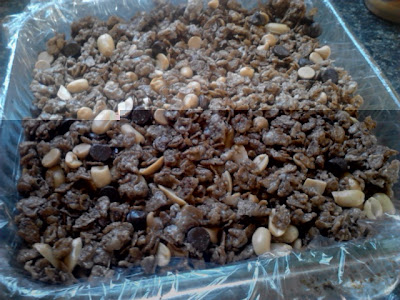 Then you pat the mixture into a dish – you were supposed to use parchment paper but I didn’t have any so I made do with plastic wrap.

I just didn’t have enough of the sticky mix because I knew when I pushed it into the pan that I didn’t have enough. Sure enough – it didn’t hold together. But I made the best of the situation and just poured the mixture into a big ziploc bag. I’m using it as a snack mix – it’s REALLY sweet – so I’m not sure if it’s a cereal bar or a snack bar.

But even with the lack of bar formation – it tastes really good. Like I said – it’s VERY sweet and rich. I take the little snack bag size to work every day and munch on it mid-afternoon.

So here’s the recipe as printed – I would recommend making more of the sticky mix or use less cocoa cereal.

Coat a 9″ square baking pan with cooking spray and line with parchment. Place cereal in a large bowl. In a large pot, melt butter over medium. Add marshmallows, peanut butter and salt and cook, stirring, until mixture is melted, about 3 minutes. Remove from heat and stir into cereal until combined. Let mixture cool slightly, 4 minutes (mixture should still be pliable), then stir in chocolate chips and peanuts. With a spatula (or your fingers) lightly coated with cooking spray, press into pan. Let stand at room temperature until set, about 20 minutes. Using parchment, left from pan and cut into 12 bars. (Store in an airtight container up to 5 days.) Makes 12