After our trip to Nana’s House Bed & Breakfast, Larry raved about the egg-free muffins that Joann made for breakfast. So much so, that I emailed Joann to see if she would share the recipe and she did! 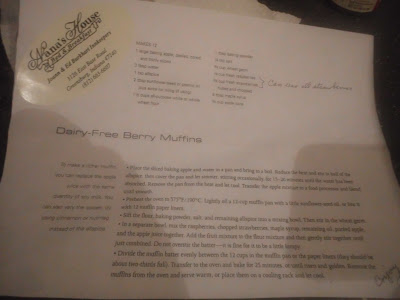 Thanks so much to Joann…I made these for Larry and then took some extra to our church picnic. (How 1950’s does THAT sound?!) 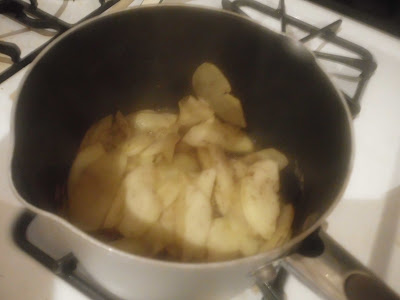 The full instructions are below – but first I had to cook a sliced apple in water. I didn’t really read the directions before starting – surprises were in store for me! After the apple was cooked, I had to put it in a food processor. I only have a little mini-processor – but it worked just fine. 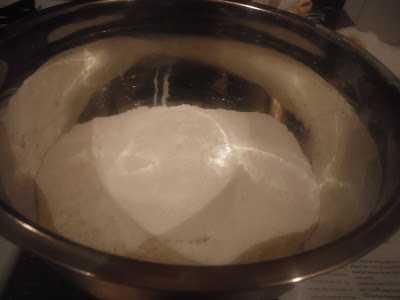 Next I had to sift the dry ingredients together…first off – I don’t have a sifter. Well – not the kind I think of that look like a tin can with a handle. And the ingredients list has wheat germ – I couldn’t find any at Meijer and was in a hurry so I omitted that. I think they came out okay without it – but next time I’ll make sure to find it to see the difference. 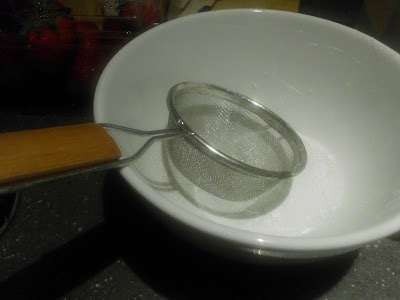 Now I didn’t think I had a sifter – but after opening my drawer – I found this little handy dandy tool! It’s a mini-sifter (I think). I used it and it worked just fine. But it did take a little longer since it was so small! 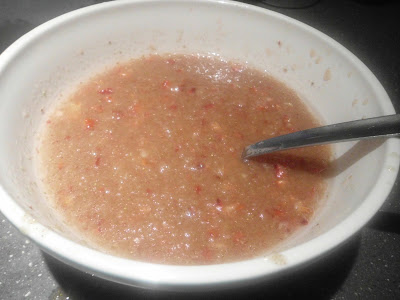 Next up I mixed the fruit, syrup, oil, apple puree and apple juice together in a separate bowl. It came out the texture of applesauce. 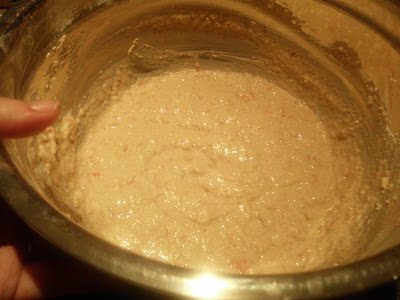 Then you stir the wet ingredients into the dry and it comes out like a big lumpy pink oatmeal. Then you just pour them into the muffin tin and bake! 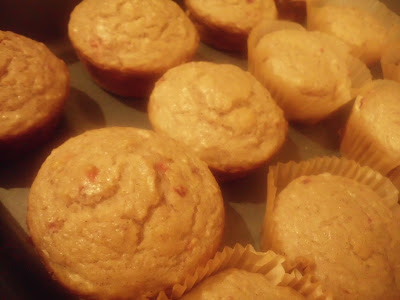 And voila! Dairy Free Berry Muffins! Larry said they were missing the crispy sugar topping from Nana’s House (can you ever please a man?!) but that they were pretty darned good!
I hope you enjoy them too! And don’t forget to sprinkle a little sugar on top!
Dairy Free Berry Muffins
– From Joann Burkhart, Nana’s House Bed & Breakfast
Makes 12
1 large baking apple, peeled, cored and thinly sliced
3 Tbsp water
1 tsp allspice
2 Tbsp sunflower seed or peanut oil (plus extra for oiling if using)
1 1/2 cups all-purpose white or whole wheat flour
1 Tbsp baking powder
1/4 tsp salt
3/8 cup wheat germ
1/8 cup fresh raspberries
3/8 cup fresh strawberries, hulled and chopped (you can use all strawberries)
6 Tbsp maple syrup
3/4 cup apple juice
* Hint: To make a richer muffin, you can replace the apple juice with the same quantity of soy milk. You can also vary the spices: try using cinnamon or nutmeg instead of allspice.
1. Place the sliced baking apple and water in a pan and bring to a boil. Reduce the heat and stir in half of the allspice, then cover the pan and let simmer, stirring occasionally for 15-20 minutes until the water has been absorbed. Remove the pan from the heat and let cool. Transfer the apple mixture to a food processor and blend until smooth.
2. Preheat the oven to 375. Lightly oil a 12 cup muffin pan with a little oil or line with paper liners.
3. Sift the flour, baking powder, salt and remaining allspice into a mixing bowl. Then stir in the wheat germ.
4. In a separate bowl, mix the raspberries, strawberries, maple syrup, remaining oil, pureed apple and the apple juice together. Add the fruit mixture to the flour mixture then gently stir together until just combined. Do not overstir the batter – it is fine for it to be a little lumpy.
5. Divide the muffin batter evenly between the 12 cups in the muffin pan or paper liners (about 2/3 full). Transfer to the oven and bake for 25 minutes, or until risen and golden. Remove the muffins from the oven and serve warm, or place them on a cooling rack and let cool.
Pin
Share
Tweet
Share
Previous Post: « Pearl Street Pub – Oldenburg, IN
Next Post: Crazy Cooking Challenge – OREO STUFFED Chocolate Chip Cookies »