I really do like to cook – it just feels like life gets in the way and I don’t have time for it. I really love Pinterest for recipes because I can pin things I want to try – then when I do have time to cook – I just pull it up and go!

I had found a couple of recipes I decided to try together. First up was the Cheddar & Pepper Stuffed Bacon Wrapped Chicken from Sweet C’s Designs (full recipe below). I love chicken, bacon and cheese – so how could this be bad?! 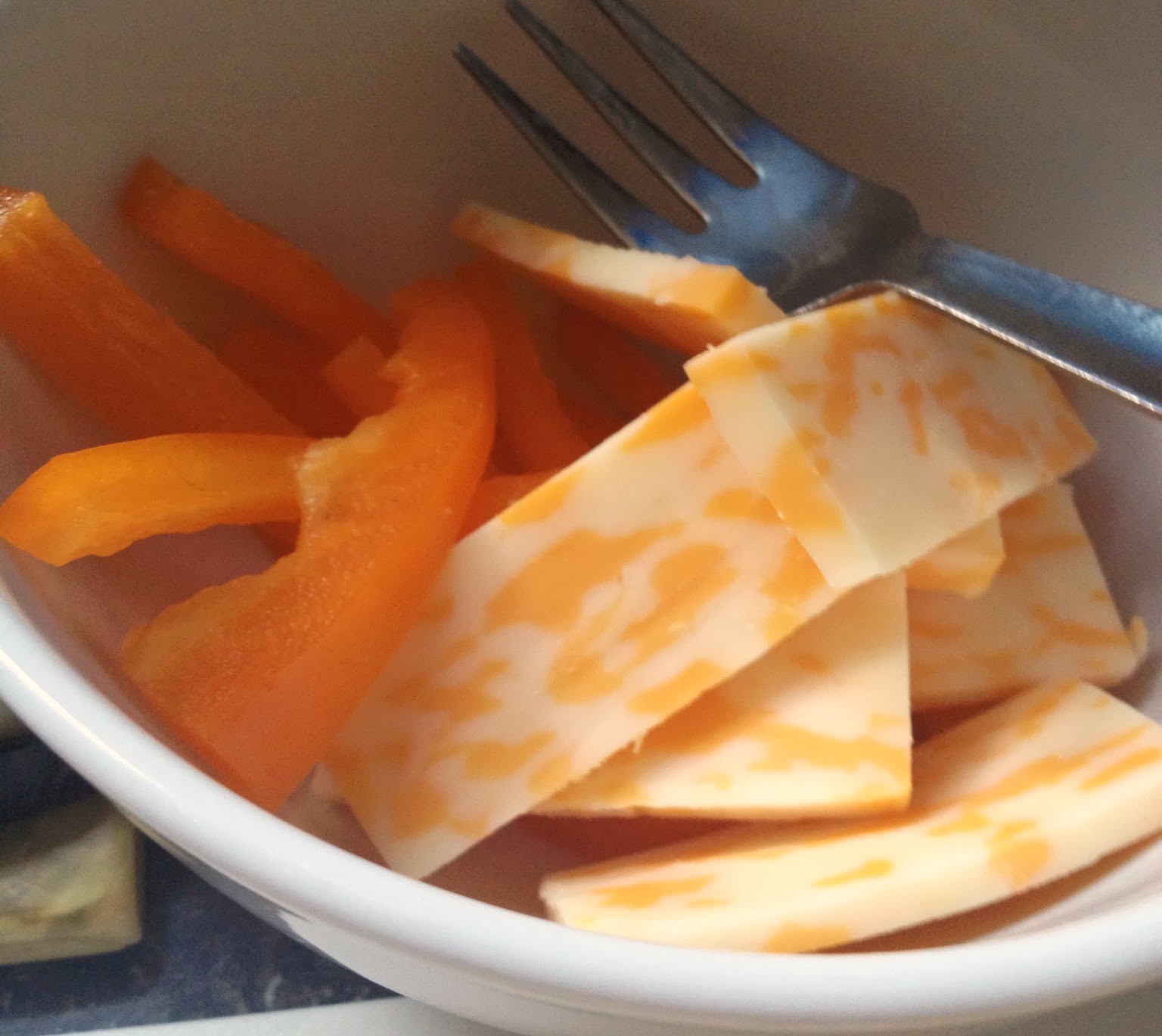 I started with cojack cheese and an orange pepper. It’s pretty simple – you cut open a chicken breast, lay the stuffing inside, fold over the chicken and then wrap it in bacon. I was pre-occupied with getting food in the oven and slacked on my photo taking. 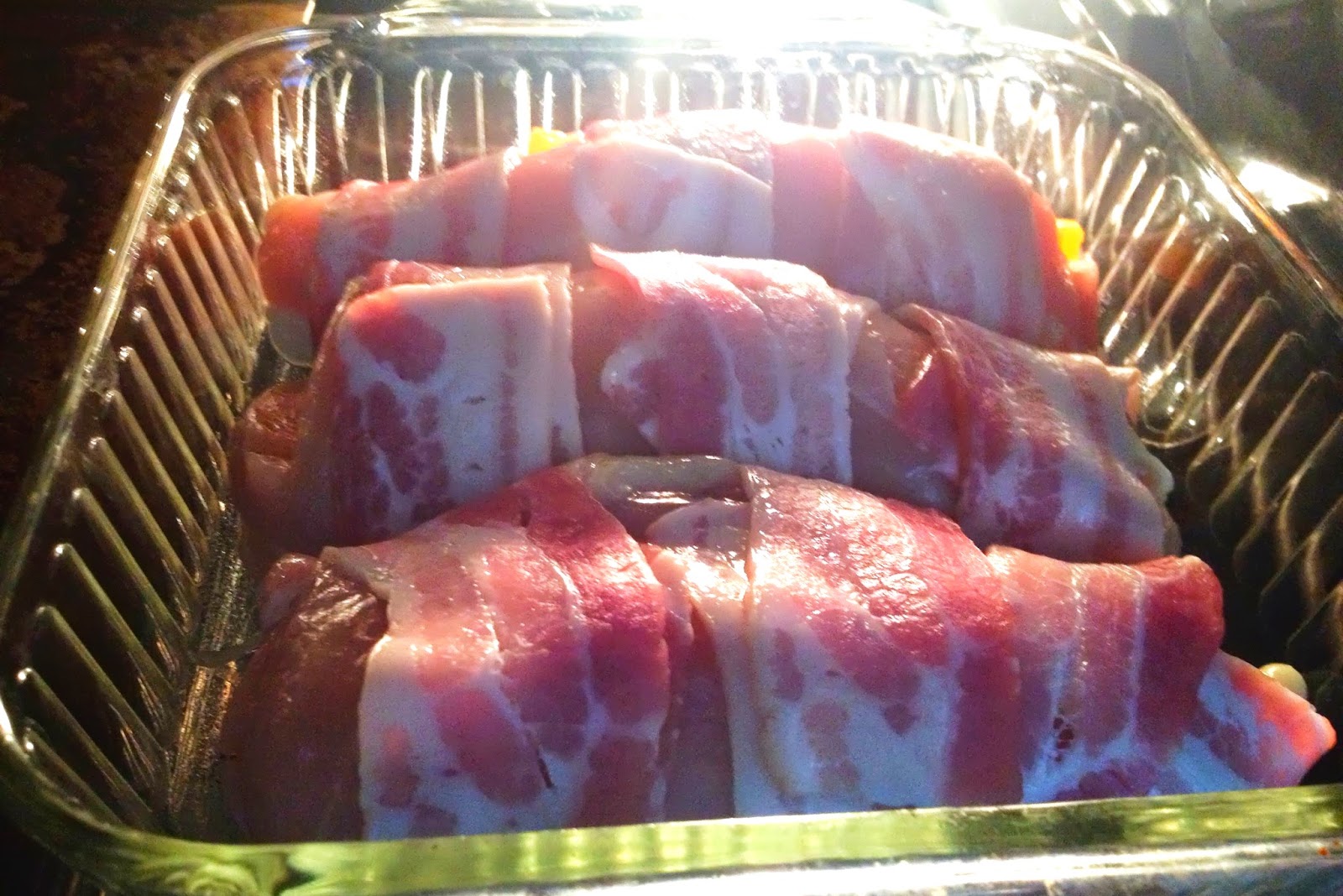 The recipe called for one piece of bacon per chicken breast – but I couldn’t figure that out. I used a couple pieces per breast. These were HUGE chicken snoobs though. So after loading the chicken and wrapping it – it went in the oven.

In the mean time, I was boiling 12 red potatoes for about 15-20 minutes. I was a little skeptical that I was basically cooking these before the actual “crash” – but I went with it. The crash potatoes came from The Pioneer Woman (full recipe below). 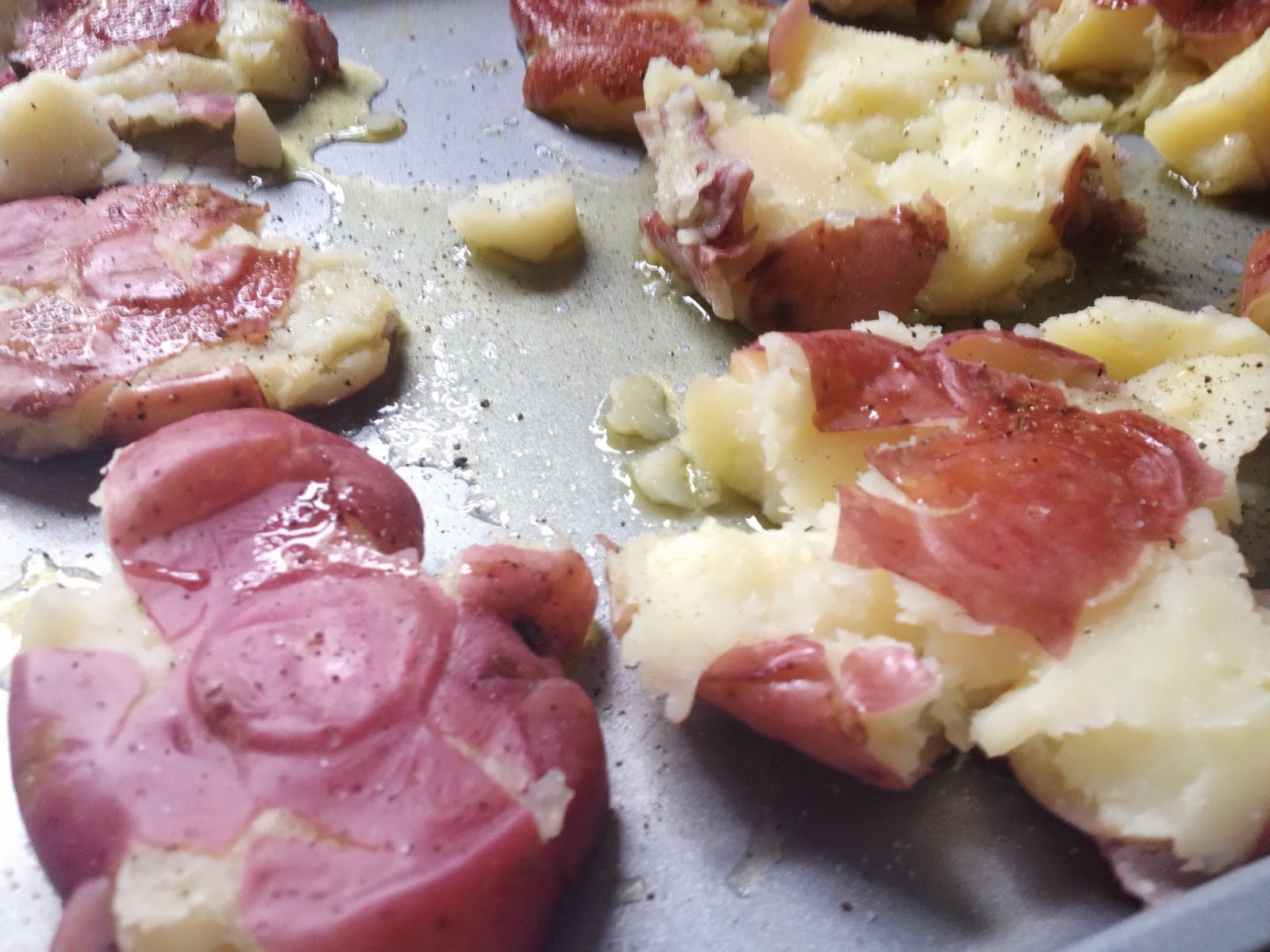 After boiling the potatoes you put them on an oiled cookie sheet and smash them! I used a drinking glass and pushed hard. You definitely need to have them boiled enough that a fork goes through fairly easily. If they’re not cooked enough – smashing will send a potato flying across your kitchen into your waiting dog’s mouth (or maybe that was just me).

After the crash & smash – you drizzle with more olive oil, salt and pepper. Then – in the oven they go with the chicken.  I would recommend the smaller potatoes for this – much easier to smash. 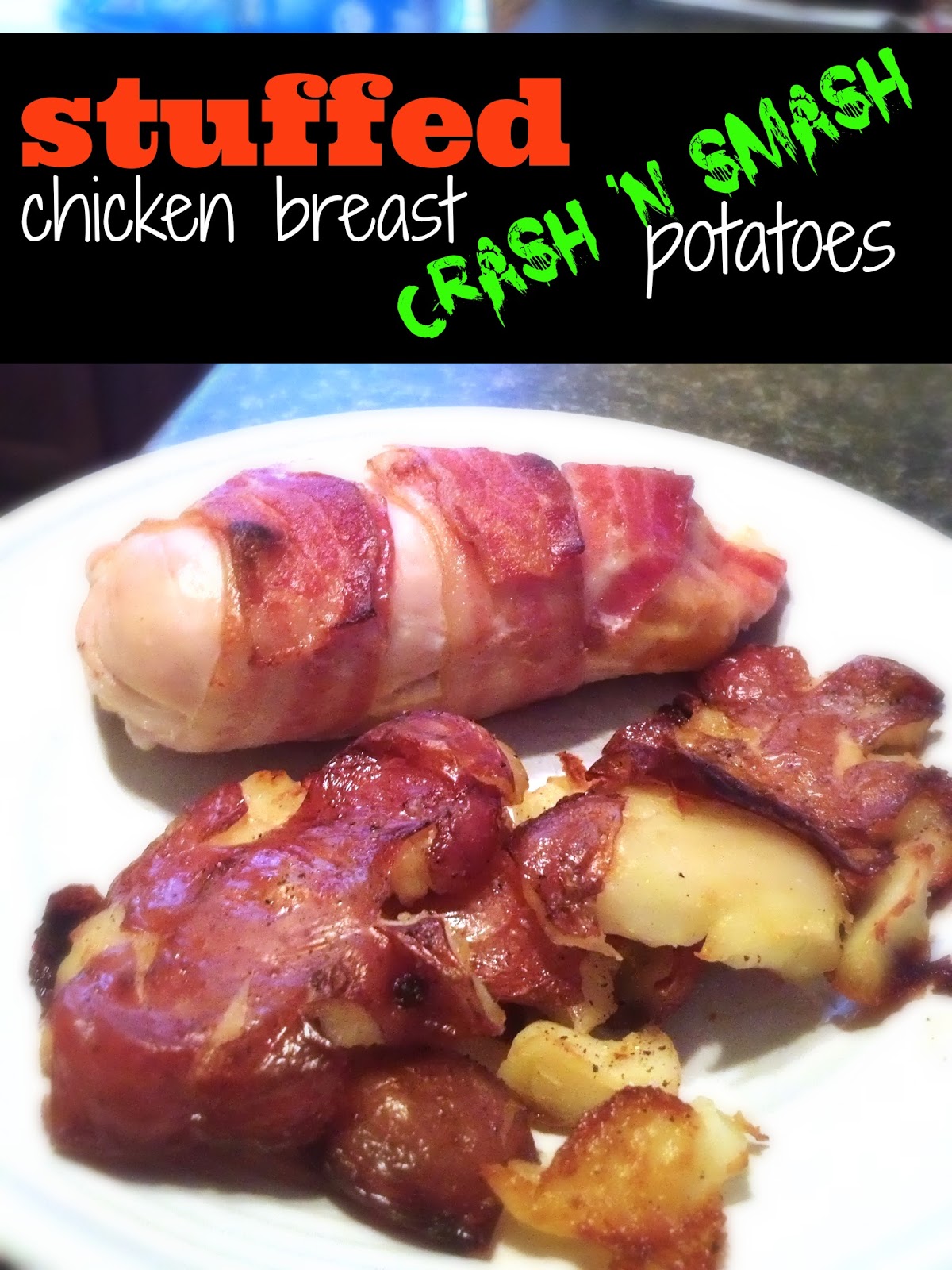 So here’s my finished dinner – stuffed & wrapped chicken with smash & crash potaotes. The potatoes were awesome! Broiling them for a few minutes really got them crispy. I loved these potatoes (and so did the husband) – we’ll DEFINITELY be making these again. 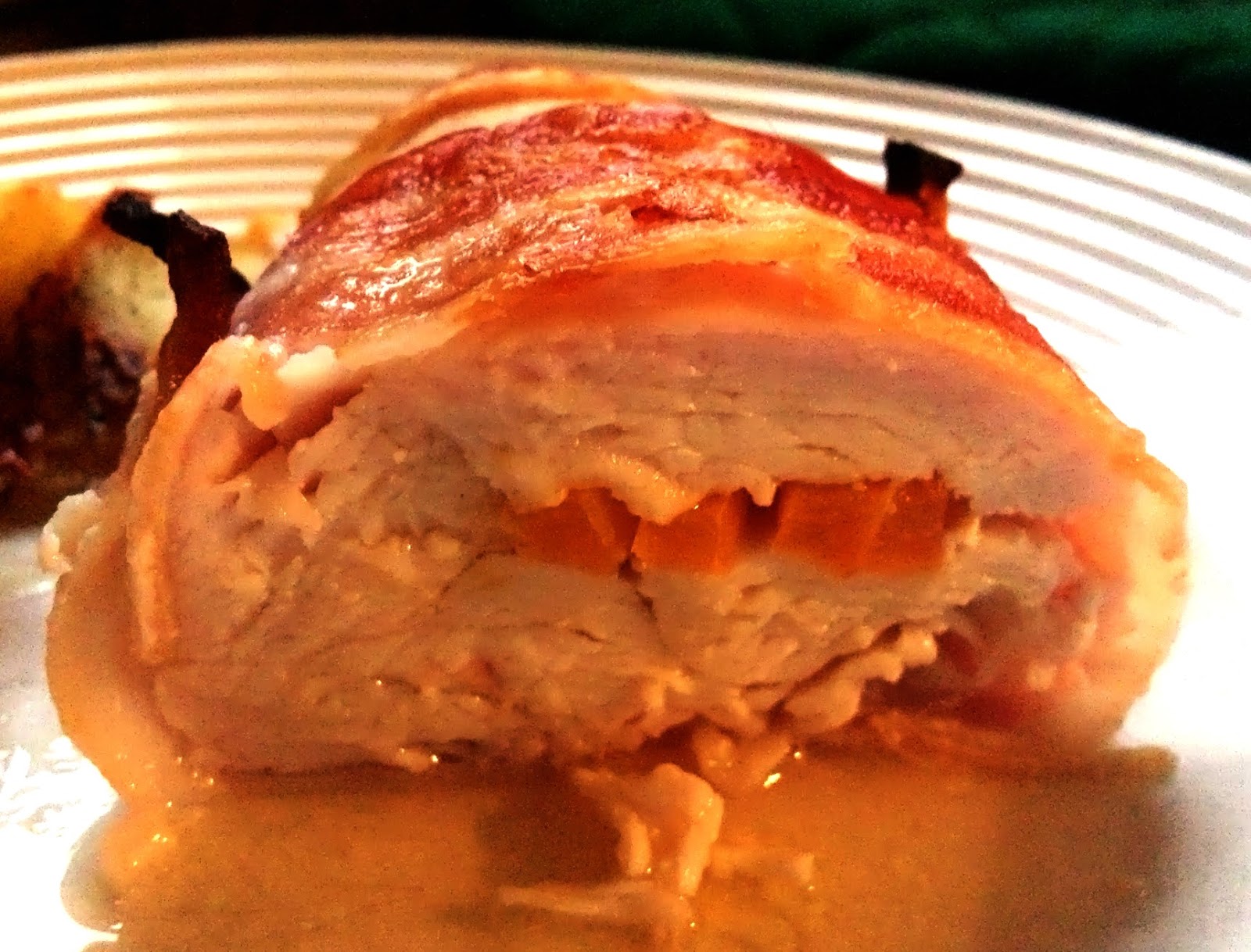 Here’s an inside shot of the chicken. I would make the chicken again – but would probably change up a couple of things. I would use smaller chicken breasts and put more stuffing inside. I always feel like the cheese just evaporates. The bacon definitely helps keep the chicken moist while baking. It was good but could have been better.

All in all a good dinner – but I can tell you – I’m already craving those potatoes again!