For New Years Eve we had some of Larry’s family over and I decided to cook up some munchies for the evening. I’m not a fancy cook – as you’ll find out – but I always like to try new recipes. Some of these were new and some I’d used before. Here’s a rundown of the recipes and my thoughts! (And remember – this was 2010 – so I could still eat cheese back then!) 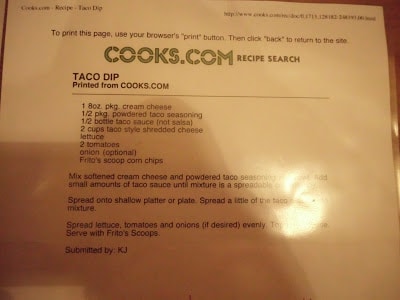 First up Taco Dip from Cooks.com. This recipe is really easy and goes together quick. I was working on this while the other dishes were baking. Make sure to use taco sauce – not salsa – I used Ortega medium. Not sure if I used a half bottle or not – I just kept pouring it in until I could spread the cream cheese around more easily. You could easily add refried beans or guacamole as other layers but I pretty much stuck to the recipe – except no onion. 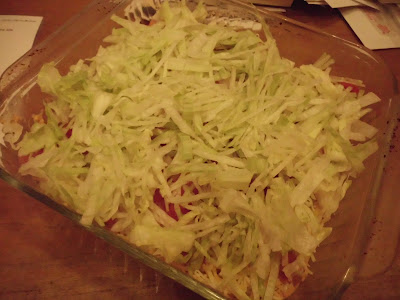 Not too fancy of a picture – but it was delicious. There was a bit leftover and Larry devoured it for breakfast the next day. It’s quick, easy and pleases most everyone! 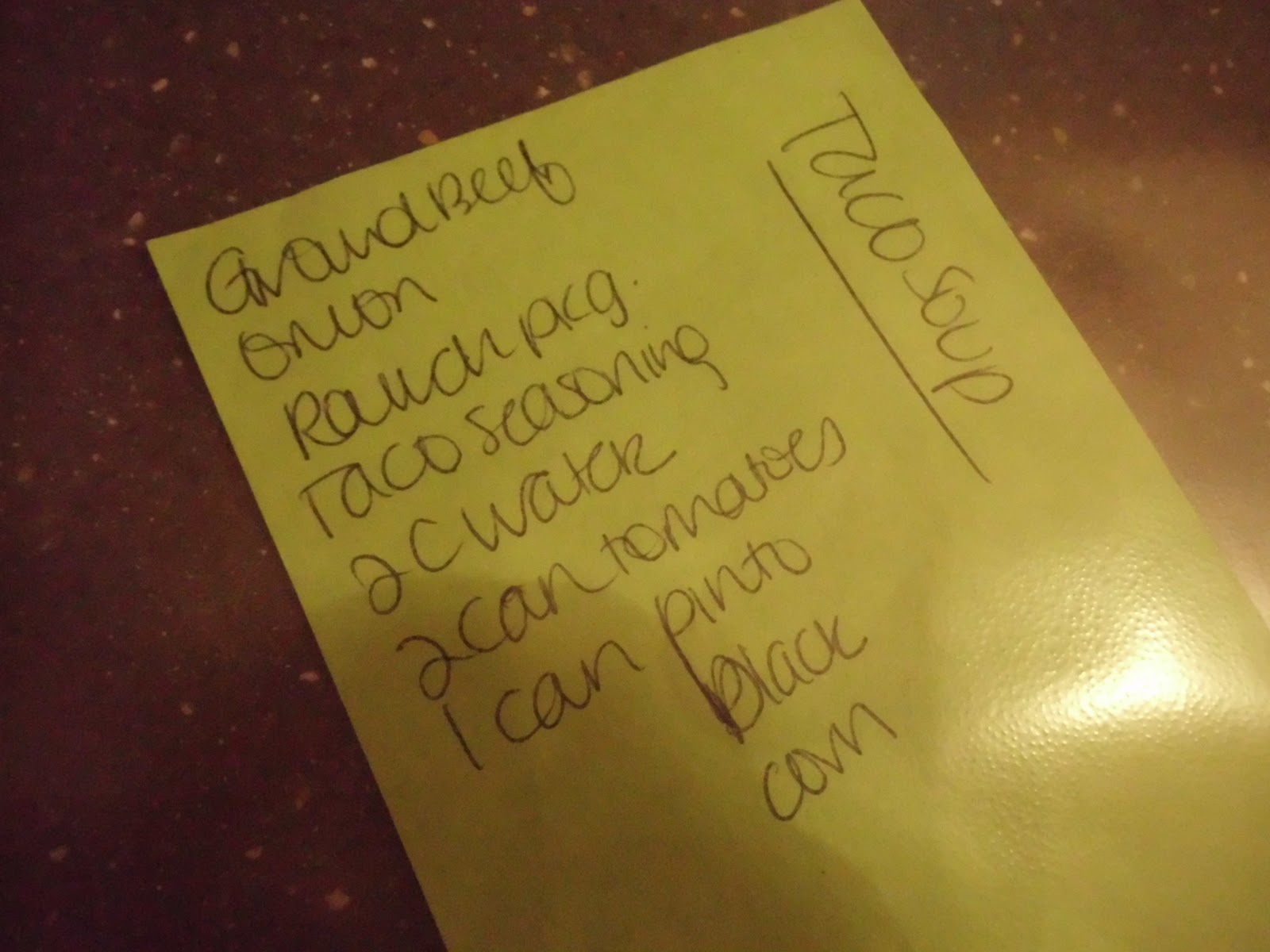 Next up Taco Soup – yes it was a taco night. I have no idea where I found this recipe – it’s on a post-it for pete’s sake! This isn’t very spicy as is…but you could easily spice it up by using Rotel tomatoes with peppers in them or just adding chili powder, etc… I wasn’t sure if his family liked spicy or not – so I figured I’d go with mild and let them add hot sauce, etc… if they wanted to. For a full written version of the recipe – check it out over at Cincinnati Coupons (I’m writing for them on Tuesdays & Thursdays now!). 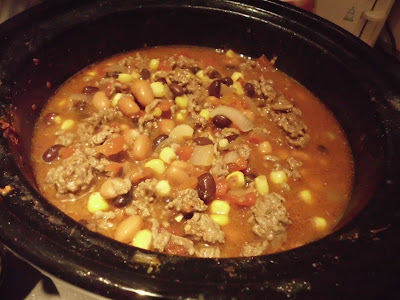 This recipe was so quick to throw together and just pop it in the crock pot for a couple of hours. If I was better prepared I would have had cheese, sour cream and other toppings for people to add – but I wasn’t. There was only 5 of us and I was in a hurry. But hey – if you’re in a hurry and have people to feed – this is a great dish. Larry’s uncle ate four bowls! 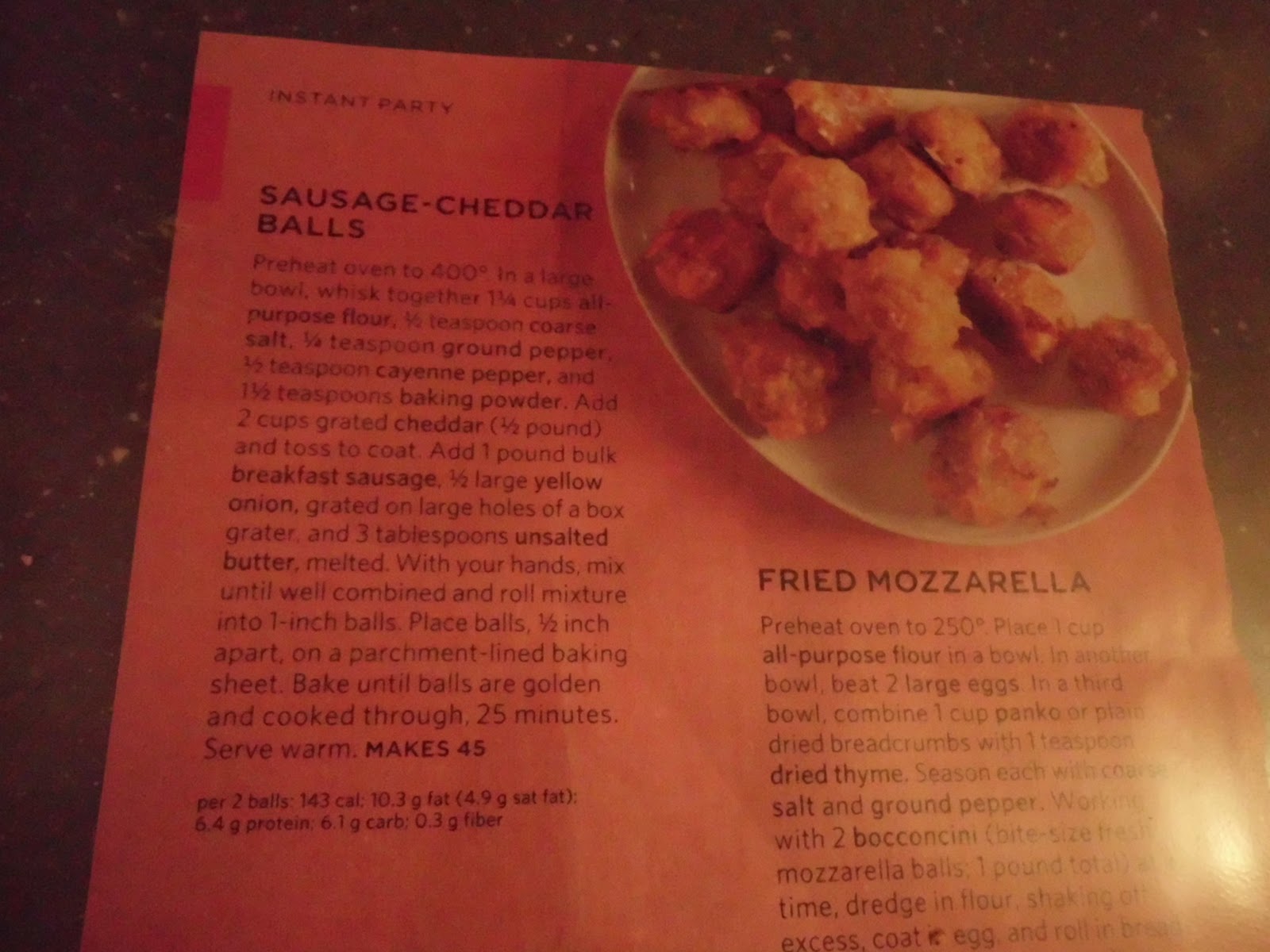 Next up, Sausage-Cheddar Balls from my favorite new cooking magazine – Everyday Food! It’s a Martha Stewart and is the size of the old TV Guide. It’s fantastic and has so many great recipes! I go through it the day it comes and pull out all the ones I want to use. It’s only $12 for a year…so it’s affordable too!

I decided to make the sausage cheddar balls. Figured it was my last night of cheese – I better have some more. It made quite a few – I filled a square baking dish and a 9×13 pan of them. 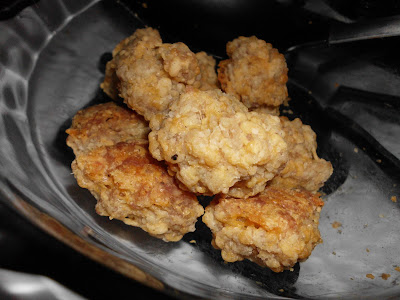 The recipe itself – well – it was just okay. I think there was too much flour for the amount of ingredients…And make sure to put these in a pan with sides NOT on a baking stone. Yeah – I’m a moron and didn’t think about how much grease comes out of pork sausage. The house was full of smoke – the grease went over the side of the pan and onto the bottom of the stove. I nearly had a meltdown! Let’s just say – I’m going to learn a lot this year when it comes to being committed to sharing recipes. I have a feeling it’s not the first smoke-filled house I’m going to have! 🙂
The balls themselves (haha) – well I just thought they were okay – but everybody else loved them and kept coming back munching on them all night. It was a quick and easy appetizer to make – so I did like that aspect of it. 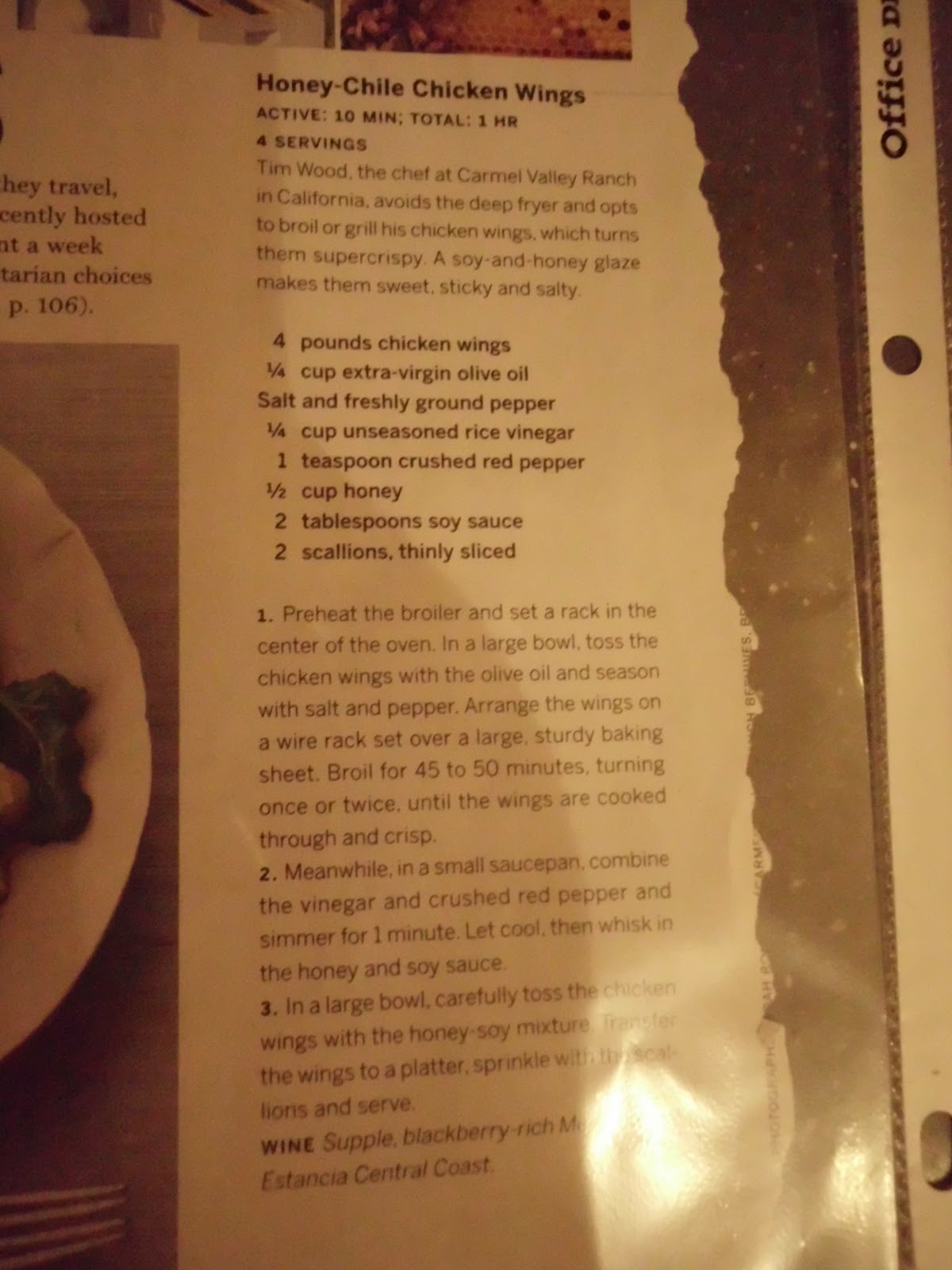 Last up I went with Honey-Chile Chicken Wings – how can you go wrong there? I’m pretty sure this recipe is from Food & Wine magazine. I got a free subscription a while back – don’t find too many recipes in this magazine. I really enjoy it but a lot of the recipes have 10+ ingredients and I’m just realistic about it. While they look good, I think “Am I ever actually going to make that?” Now my friend Sarah over at Food for Thought quite often uses F&W – but she’s a fancier cook than I am. 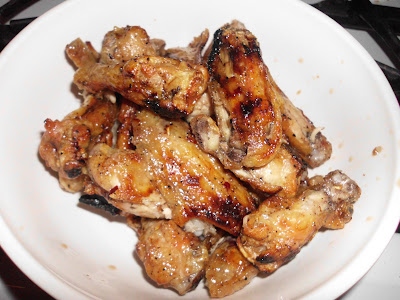 I only used 2 pounds of wings but made the full recipe for the sauce so I had some left over. These were pretty easy to make although my broiler charred up the ends of the wings. I cut those off for the guests – who wants charred wings? I also took the time to use my kitchen cutters and cut the wings into the easier to handle pieces (the wing side and the little leg side). They were pretty good although I’ve had a recipe that I used for chicken thighs that had more flavor. Larry’s other uncle demolished these – I think he had 1.5 pounds of the 2 pounds of them! So while I probably won’t make them again – they were well liked and easy – so I’d definitely recommend giving them a try.

So that was New Years Eve at Casa de Johnson! It was a really fun night and took me about 2 hours to get all the food from the fridge to the table (that includes the 20 minutes needed to de-smoke the house). I think that as the years goes on I’ll get better with recipes and what insights to share. 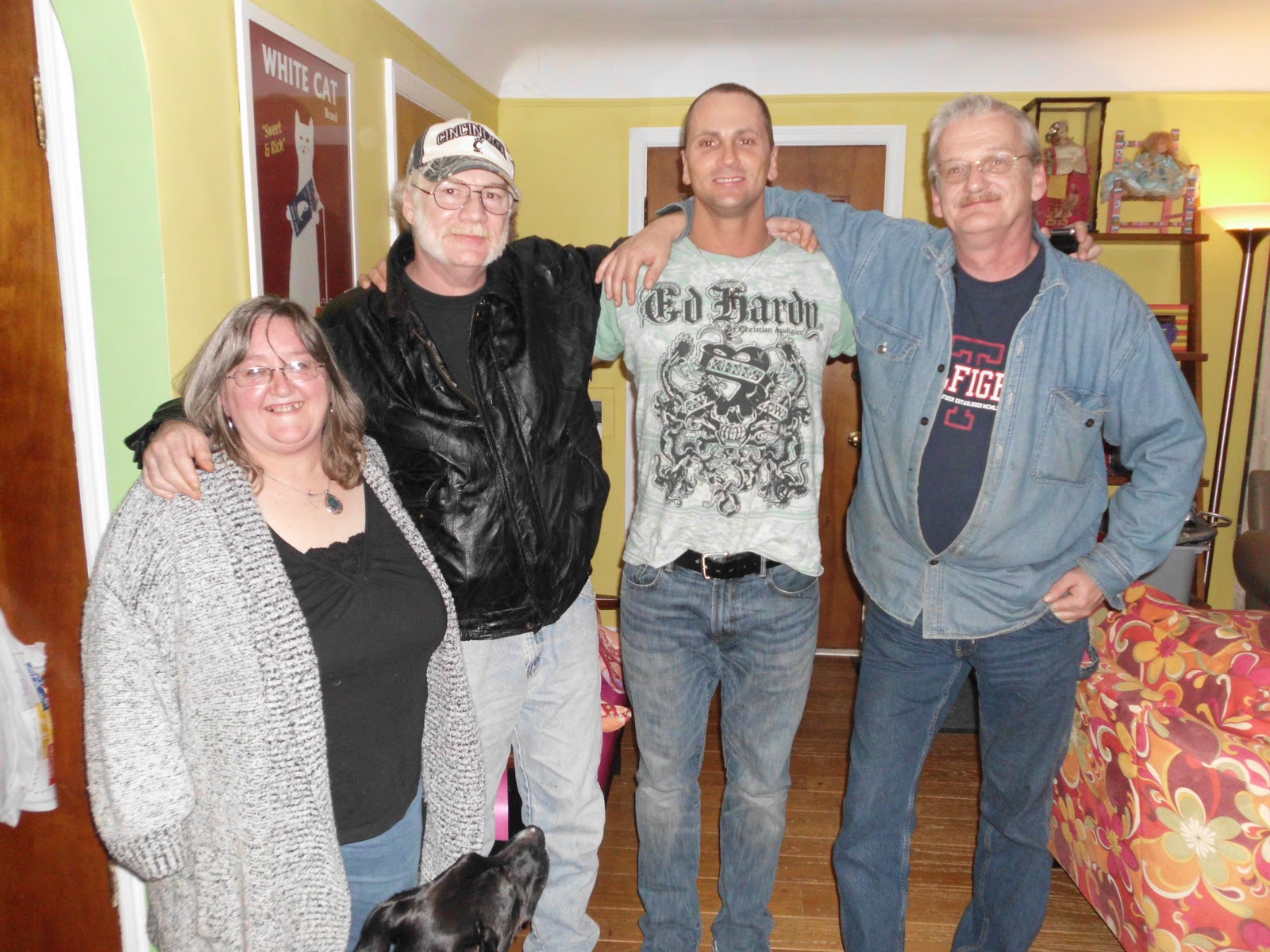 We all had a great time and watched Kathy Griffin & Anderson Cooper ring in the new year on CNN. I love this picture because it’s a  happy family with my lovely dog sticking her nose in. And I realize – wow – my house is colorful!!!!