A few weeks ago – the folks at Red Lobster invited a group of bloggers to taste some of their new items and I am SO glad I went!
I got to meet Adventure Mom, Family Friendly, Gravy Train and Entertaining Views – all these bloggers and all this food!! It’s gonna be a good night! 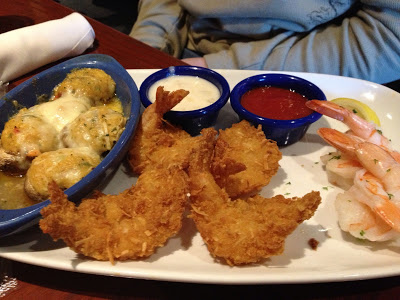 First up was a bevvy of appetizers! The Seaside Sampler has lobster & crab stuffed mushrooms, coconut fried shrimp and shrimp cocktail. Shrimp cocktail is always good but for sure the coconut shrimp was my favorite. I love fried butterfly shrimp and you could definitely taste the coconut. 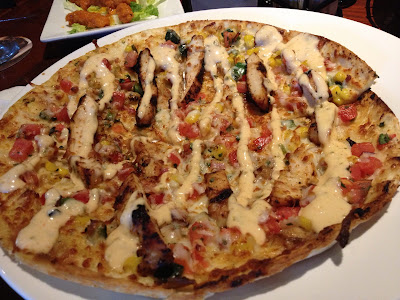 Do you have anybody in your family that doesn’t like seafood? Well – now you can bring them! They have a few new options – one is the Southwest Chicken Pizza. There was bbq chicken, corn, peppers and jalapeno ranch. The crust was really thin and crispy and for a non-seafood person – it’s a great option! 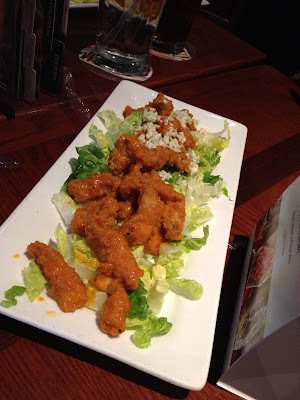 Another non-seafood option is their new Buffalo Chicken Bites. Little strips of chicken breaded, fried and dipped in buffalo sauce. This was a favorite across the entire table – who doesn’t love buffalo sauce? 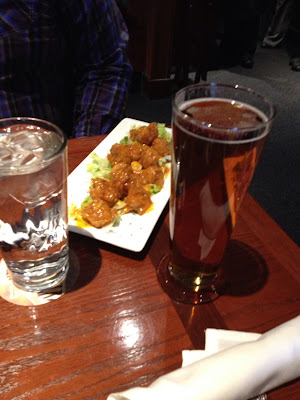 My personal favorite was tucked away between two boys but I managed to wrangle some away from them. It was the sweet chili shrimp – this was big butterflied shrimp that is breaded, fried and then dipped in the sweet chili sauce. It had a kick to it but was still light and tasty!

Beyond the apps – we also had the classic cheddar bay biscuits and salads – the Caesar at Red Lobster is one of my favorites! But I’d had both of those before – so I was trying to save room for more new goodies! 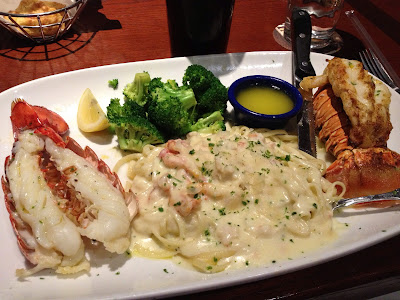 I decided to try lobster – it was LobsterFest so what better time to have some! I have tried it before but usually Larry and I get King Crab so we decided to try something different this time.

My special had two kinds of lobster as well as crab alfredo. I have to say their crab alfredo is one of my favorite of entrees. It’s one of those things I crave and out of nowhere I’ll just have to go get it – right now! So I was really excited to have it – plus with all the apps – LEFTOVERS! Needless to say – I had a great lunch the next day. 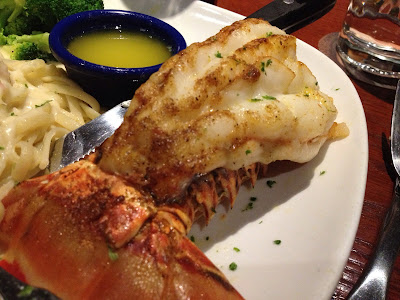 First up – the Rock Lobster. These type of lobsters actually don’t have claws! Instead of claws they have antennae to protect themselves. Rock lobster almost has a chicken texture to it – you definitely need a steak knife to cut it. It’s not near as sweet as Maine lobster. It’s good but… 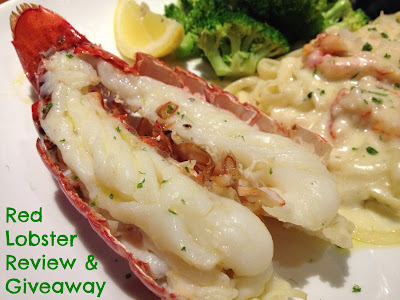 …the Maine lobster was my favorite! It’s much sweeter and more crab-like in it’s sweetness. Plus – as Larry mentioned – it’s far less work than crab! It’s got a light texture and when you dip it in the drawn butter – it’s delicious!

After this – they even gave us dessert! Oye – we were so full – I took mine home. So yeah – the next day my lunch was lobster, crab alfredo and cheesecake. Not too shabby!

We love Red Lobster – it’s good affordable seafood! And now – even more affordable – in addition to the chicken dishes – they’ve added 15 entrees under $15! Right now they also have a dinner for two special for just $25! It includes salad, biscuits, two entrees and an appetizer or dessert! One of which is Pineapple Upside Down Cake – um – I might have to check that out.

And now I’ve got $25 for one of you! You can check out that dinner for two special for yourself! Enter below to win that for yourself!