I’m still working my way through Cincinnati Magazine’s Best Burgers in Cincinnati list and here we are at a new place I had never even heard of! 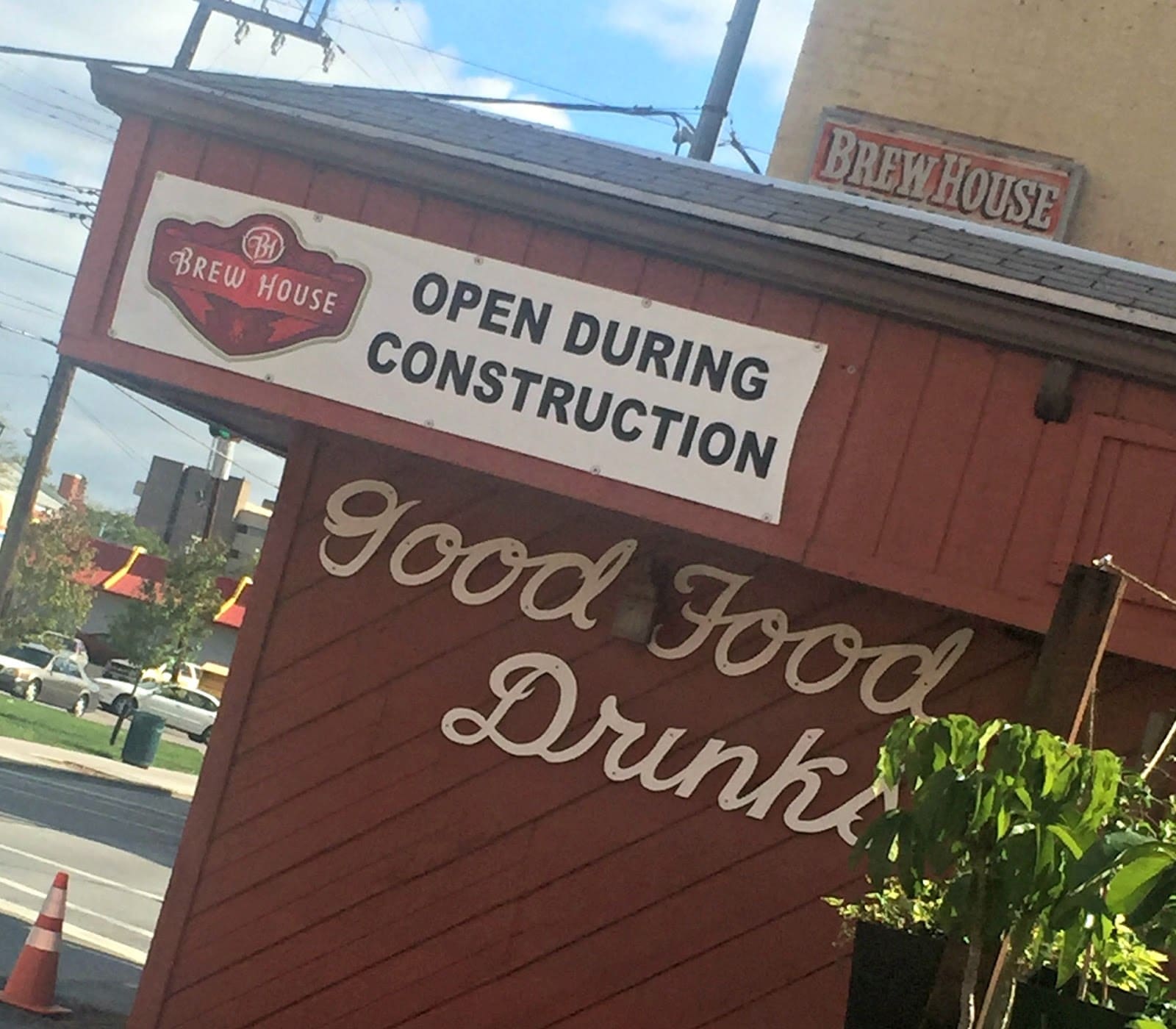 The Brew House is in Walnut Hills just outside of downtown. It’s a small place but does have it’s own parking lot. It’s across from Parkside Cafe (a former Frisch’s).
Now – if you’ll notice on the Cincinnati Magazine list – their burger is noted as The Big Jack at a cost of $6.50. 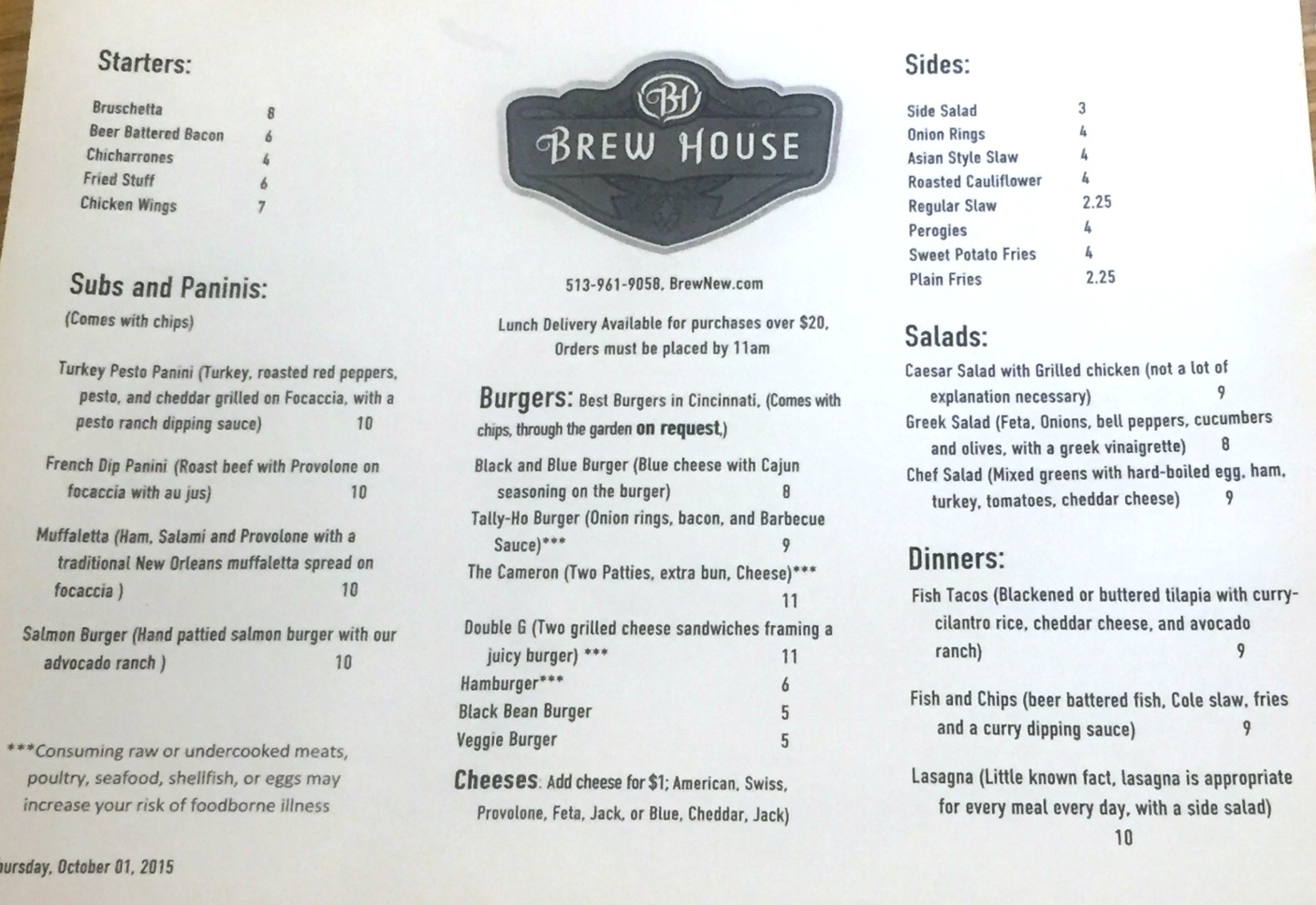 So when we got there – it was a bit confusing because there’s no Big Jack on the menu and nothing that is $6.50 on the menu. So I went up to the bar and asked the manager – I explained that I was a blogger and I’d read the article and blah blah blah. He explained that the menu had changed four days before the article came out and they had no idea the article was mentioning them. He also said the menu hadn’t changed in years so they updated it and updated the prices (and by update – he meant doubled). I then mentioned that the website still had the old menu & prices and he immediately updated the website.

I was a bit surprised that since I went up and talked to him about he didn’t say, “oh well hey – since you’re giving us free publicity – let me give you the burger at the price you were expecting” – but oh well. I don’t expect things for free – but this blog does serve as advertising that lives on for years. (Climbing off my soap box now) 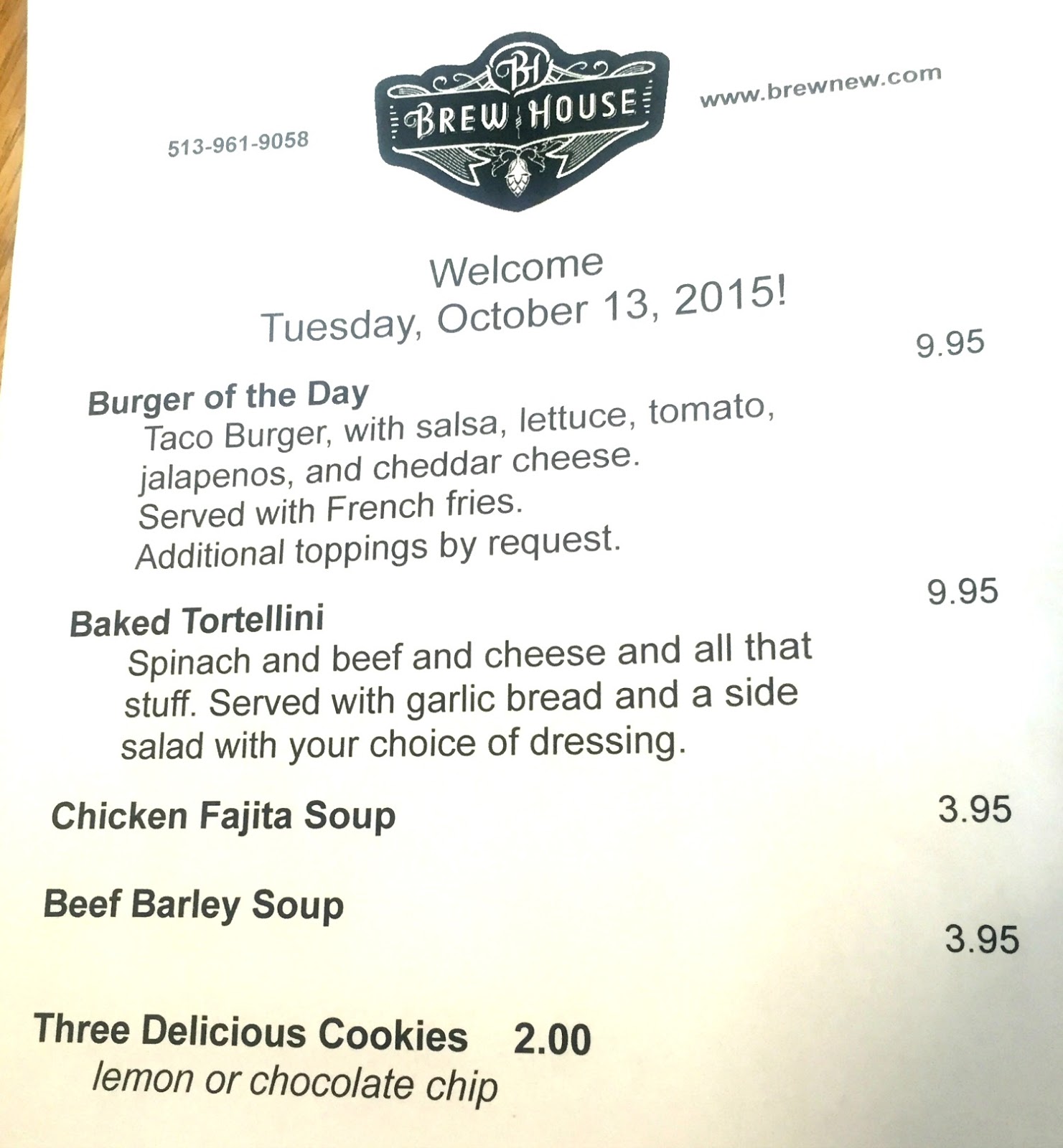 In addition to the regular menu, they have daily specials – which we were definitely going to partake in.

The artwork is very unique – it’s sort of kitshy and bad art – from sad clowns to embroidered daisies. The whole place is sort of a strange cross between a bar and a diner – but it seems to work for them. 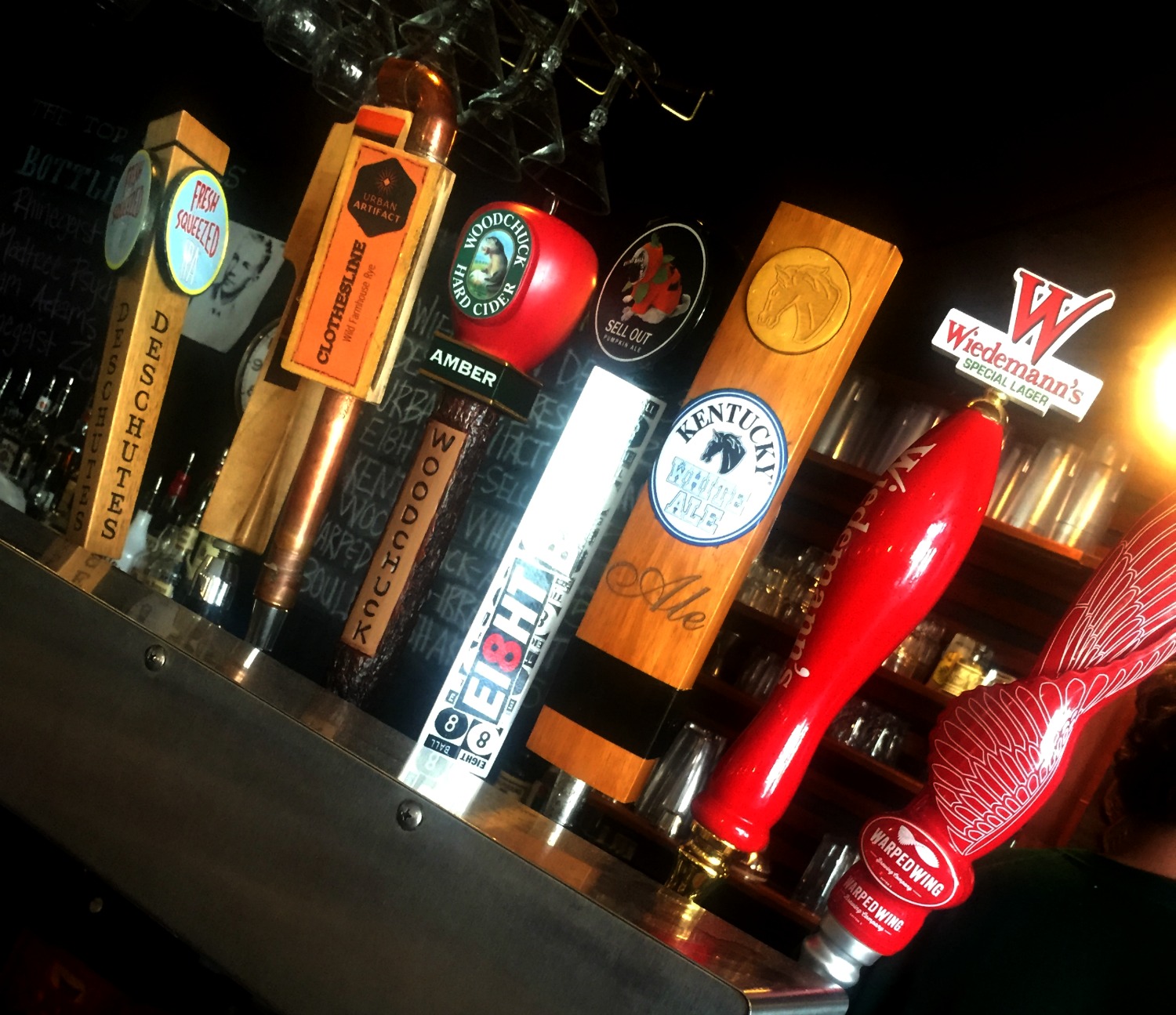 They also – by the name Brew House – have quite a few great craft brews on tap. I was intrigued by the Kentucky White Ale because it’s made by the same folks as the Bourbon Barrel Ale that my hubby loves so dear. This is a very light beer – I’ll stick with my cider though. 🙂 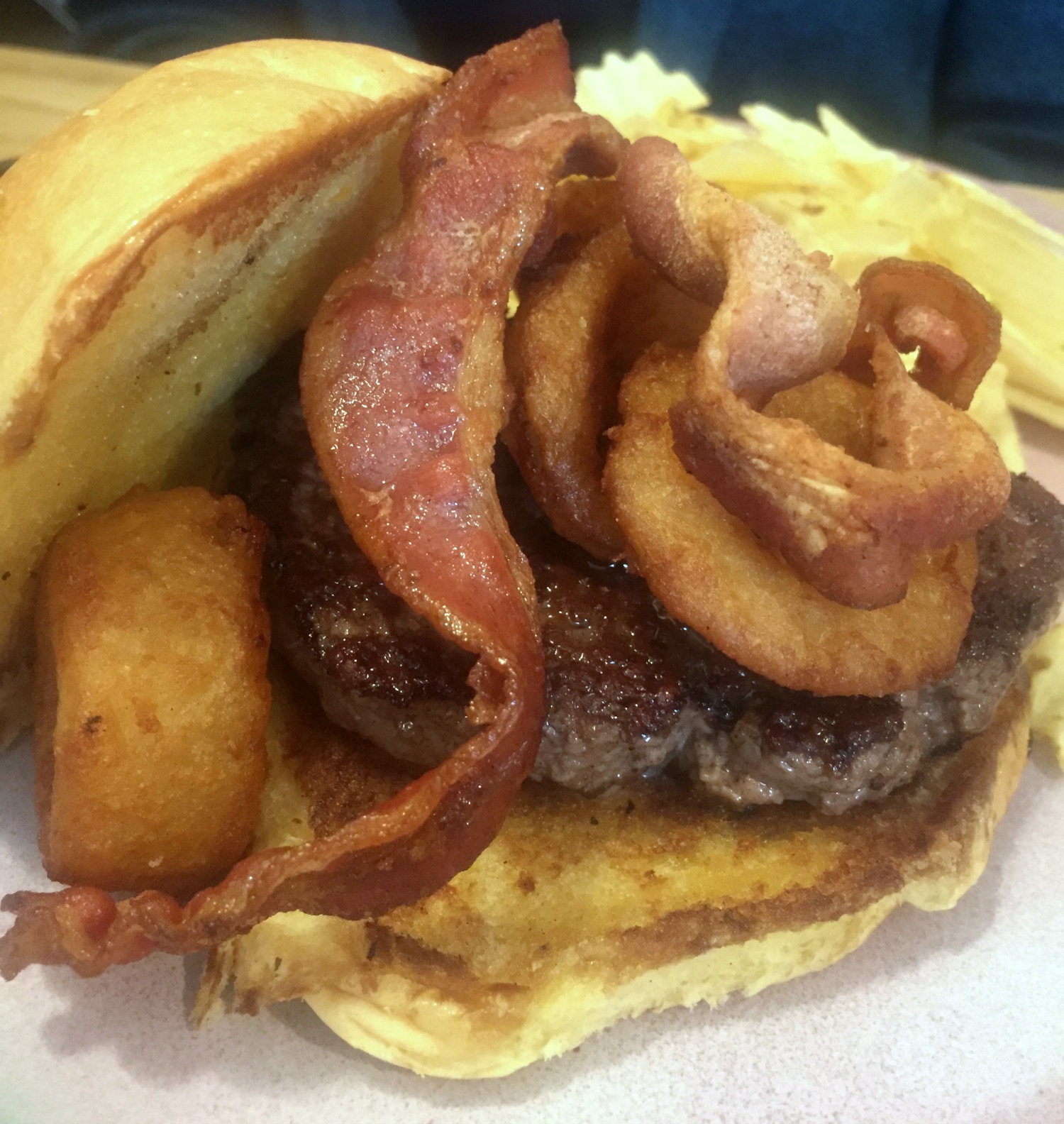 Dawn went for the Tally-Ho burger ($9) with onion rings, bacon and BBQ sauce. The burgers were pretty big and definitely filling. The burger itself was fine – not amazing – but pretty good. 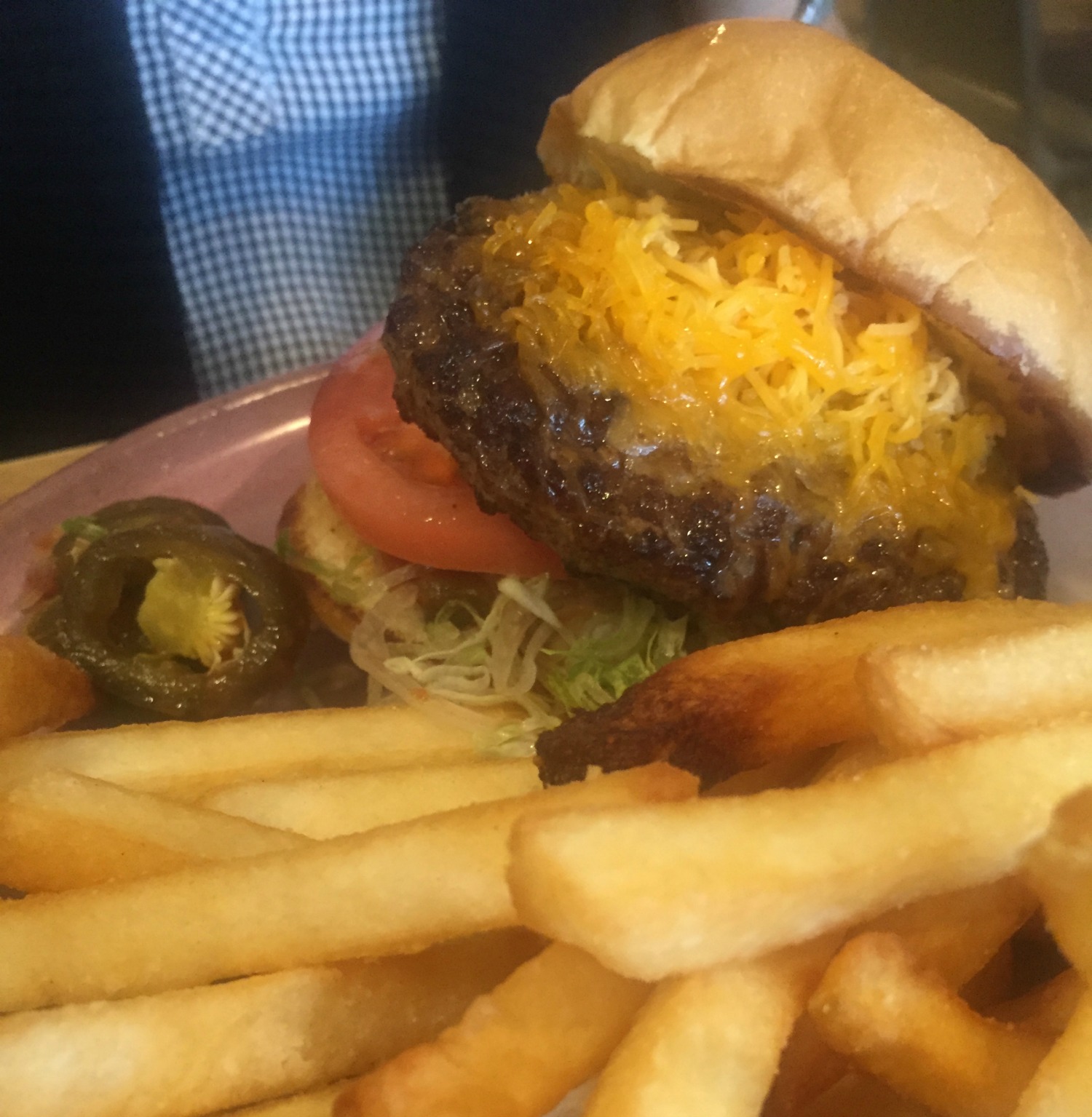 Susie went for the special Taco Burger ($9.95) with salsa, lettuce, tomato, cheese and jalapenos. It almost seemed a little lackluster for a name like a Taco Burger – I wanted to see something a bit more ethnic – guacamole, sour cream, homemade salsa, something. 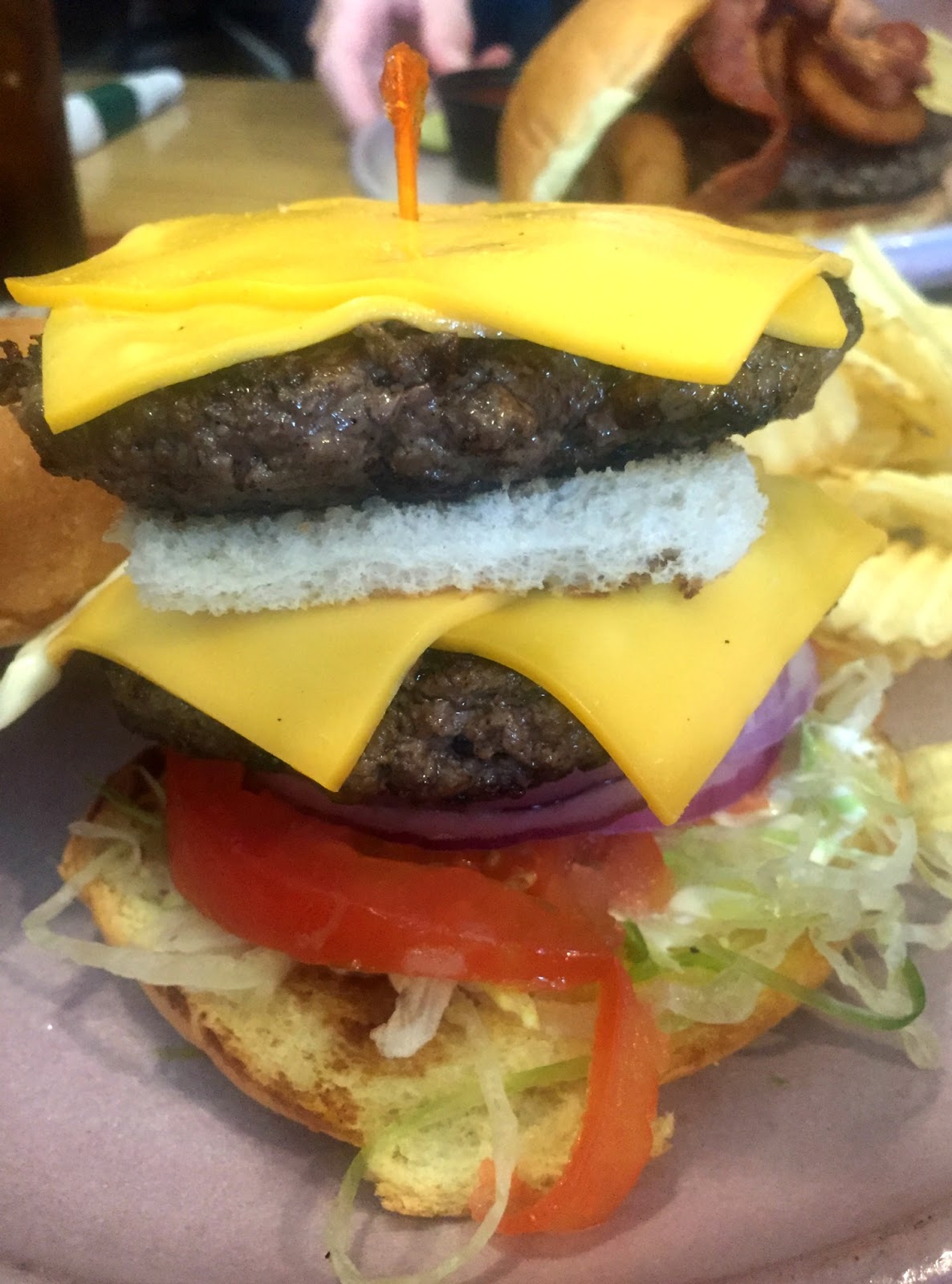 I went for the Cameron – which used to be the Big Jack – and went from $6.50 to $11. ELEVEN DOLLARS. Just absorb that sticker shock – now I have paid $11 for a burger many times – but the shock factor comes in when you’re thinking – ooh I’m getting a cheap burger (ala Quatmans, Herb & Thelmas) AND it’s amazing – then you walk in and pay double. Yikes!

The Cameron had two patties  and extra bun in the middle and cheese. So sort of a “big” Big Mac sans special sauce. But the cheese was the kind you get in individual plastic wrap – yuck. I’m a Land O’Lakes girl to the core – so this was hugely disappointing. It is a tall burger – but there really wasn’t much innovative about it. It was a LOT of food though for sure.

Why Should You Go? Is it a good burger? Yes. (Now I’m saying “Welcome to Good Burger – Home of the Good Burger – Can I take your order?!”) Is it a great burger? No. The staff was nice and it’s a cute little place. If you go in knowing the prices – you’re good.