Larry and I took a day off and went on a day drive – the weather was beautiful so we decided to end the day with a bite to eat outside… We were heading down Kentucky 8 and landed in Bellevue, KY. 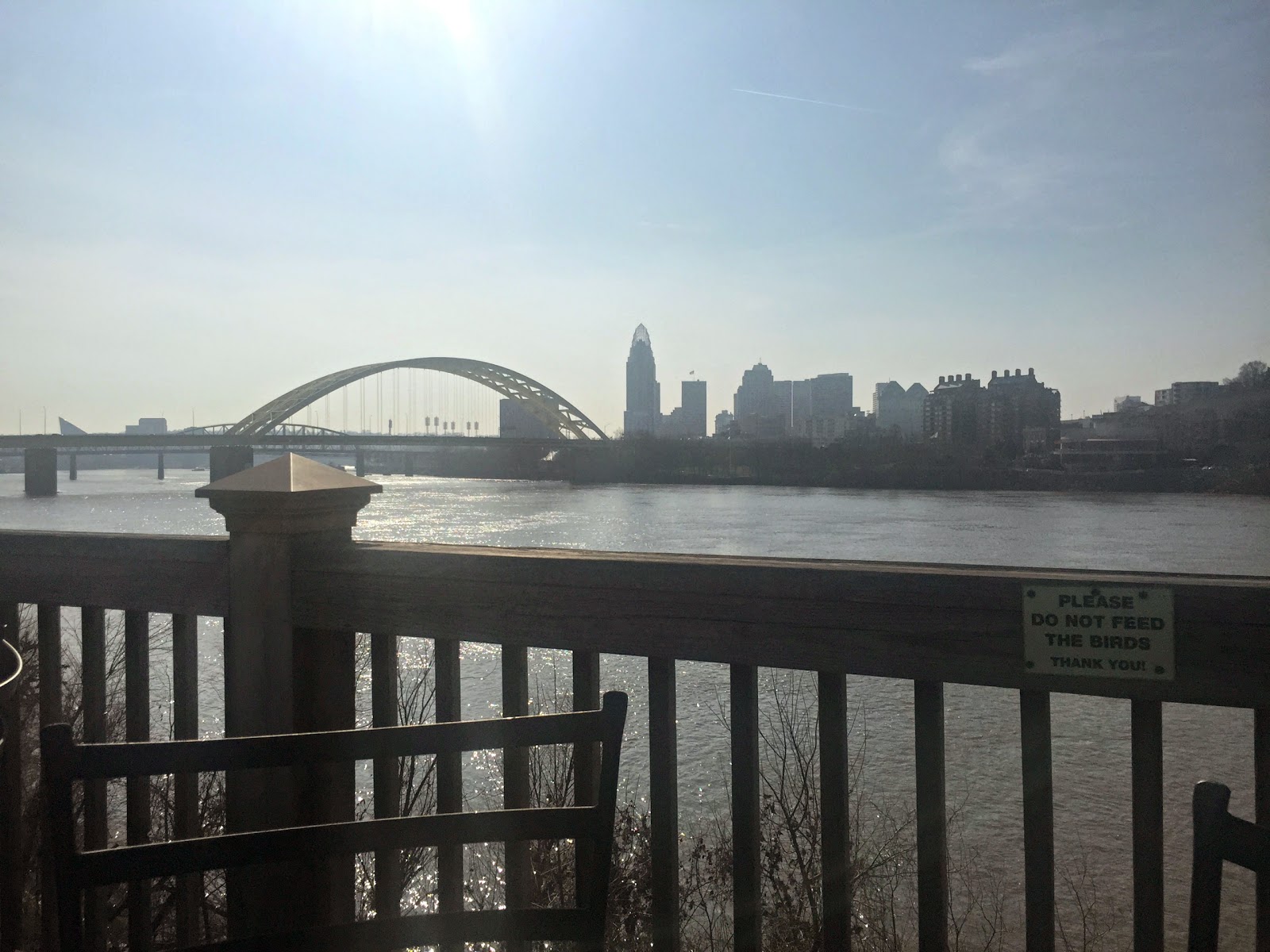 Buckhead Mountain Grill has a location right on the river with a huge deck – so it was the spot. I thought Buckhead was a much larger chain – but they only have 3 locations – Bellevue, Louisville and Jeffersonville, IN. It makes me like them a little more! 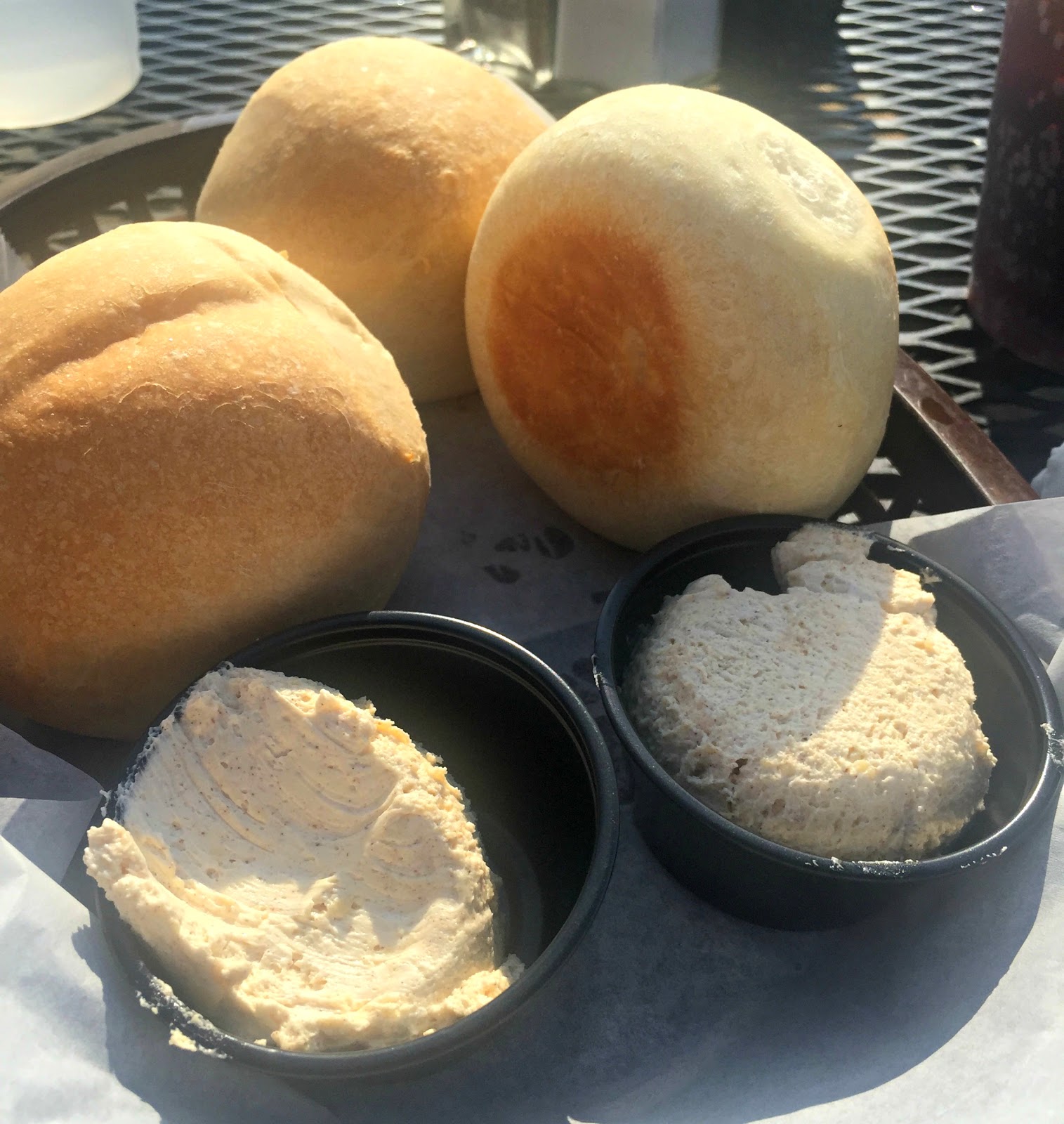 We started out with their yeast rolls served with cinnamon butter. These are really good – light and fluffy – served hot right out of the oven! 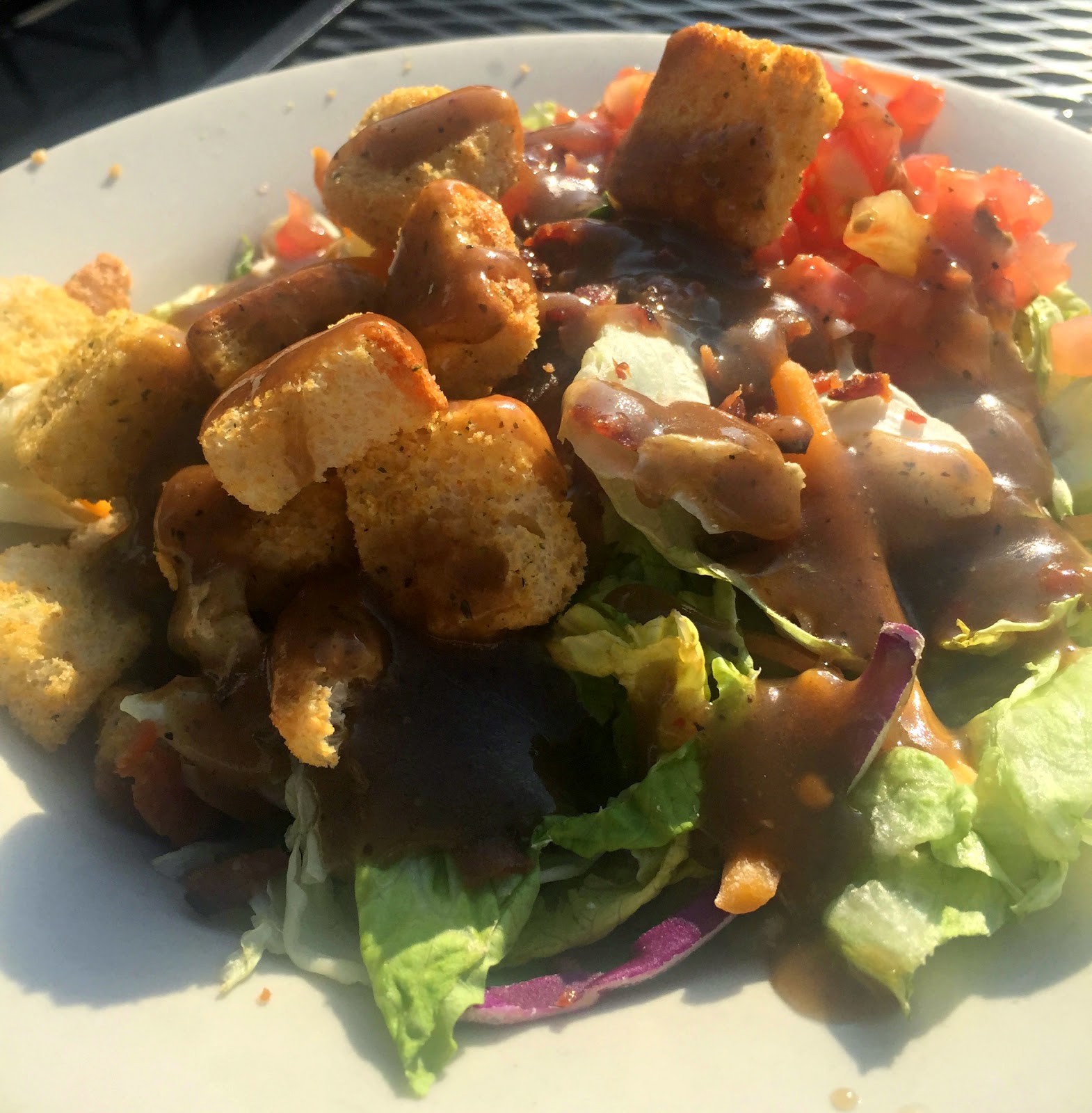 Larry went for the soup & salad combo ($7.99) – the house salad has tomatoes, bacon, egg, shredded cheese and croutons. He left off the eggs and liked it. It’s funny – he gets in these salad kicks – it’s so odd! When he’s not in that kick – I can’t get him to touch a vegetable! 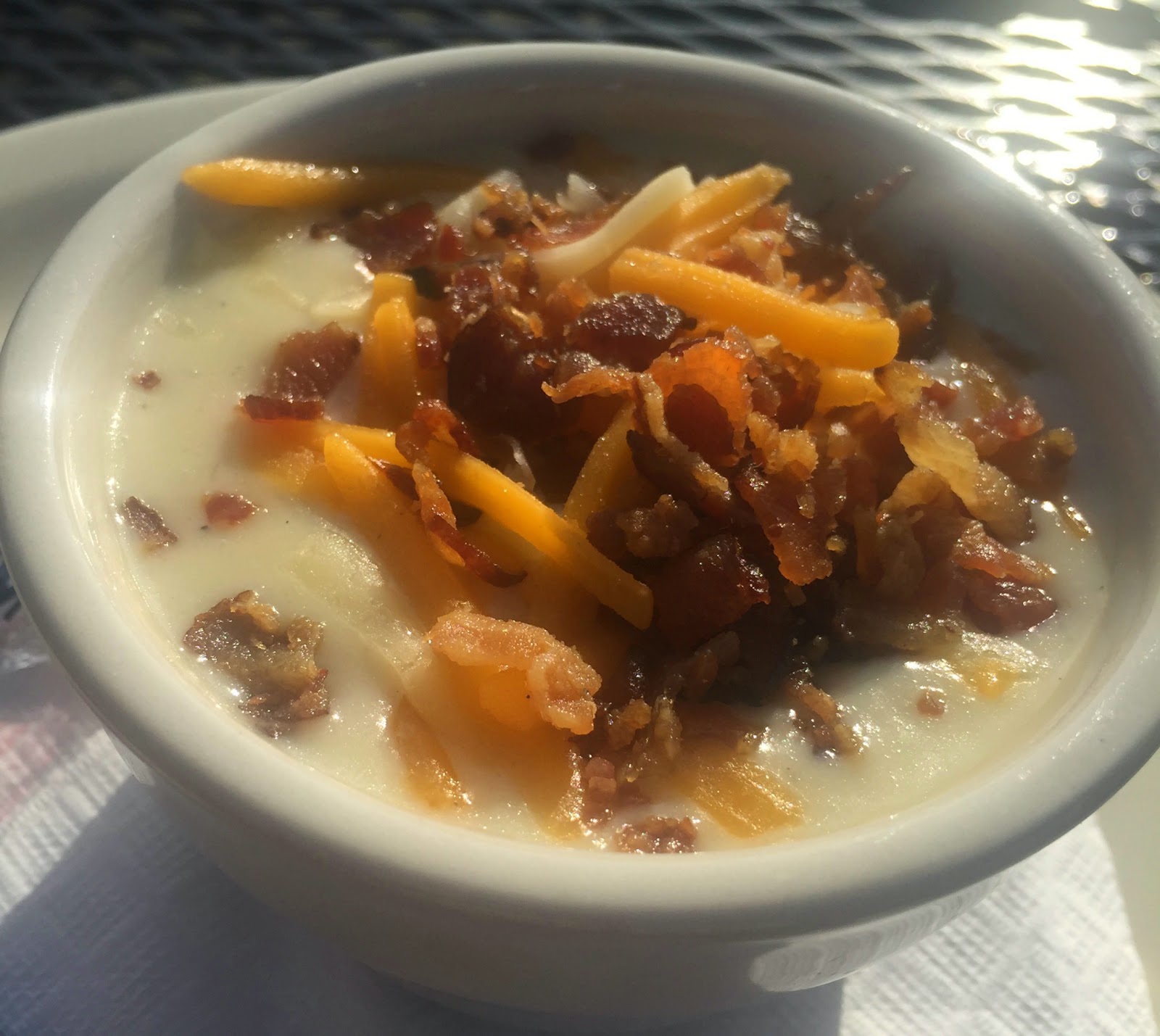 For the soup – he chose the Baked Potato Soup. I’m super picky on baked potato soup – I like it creamy and made with milk – not brothy. This hit the nail on the head. It was really good. 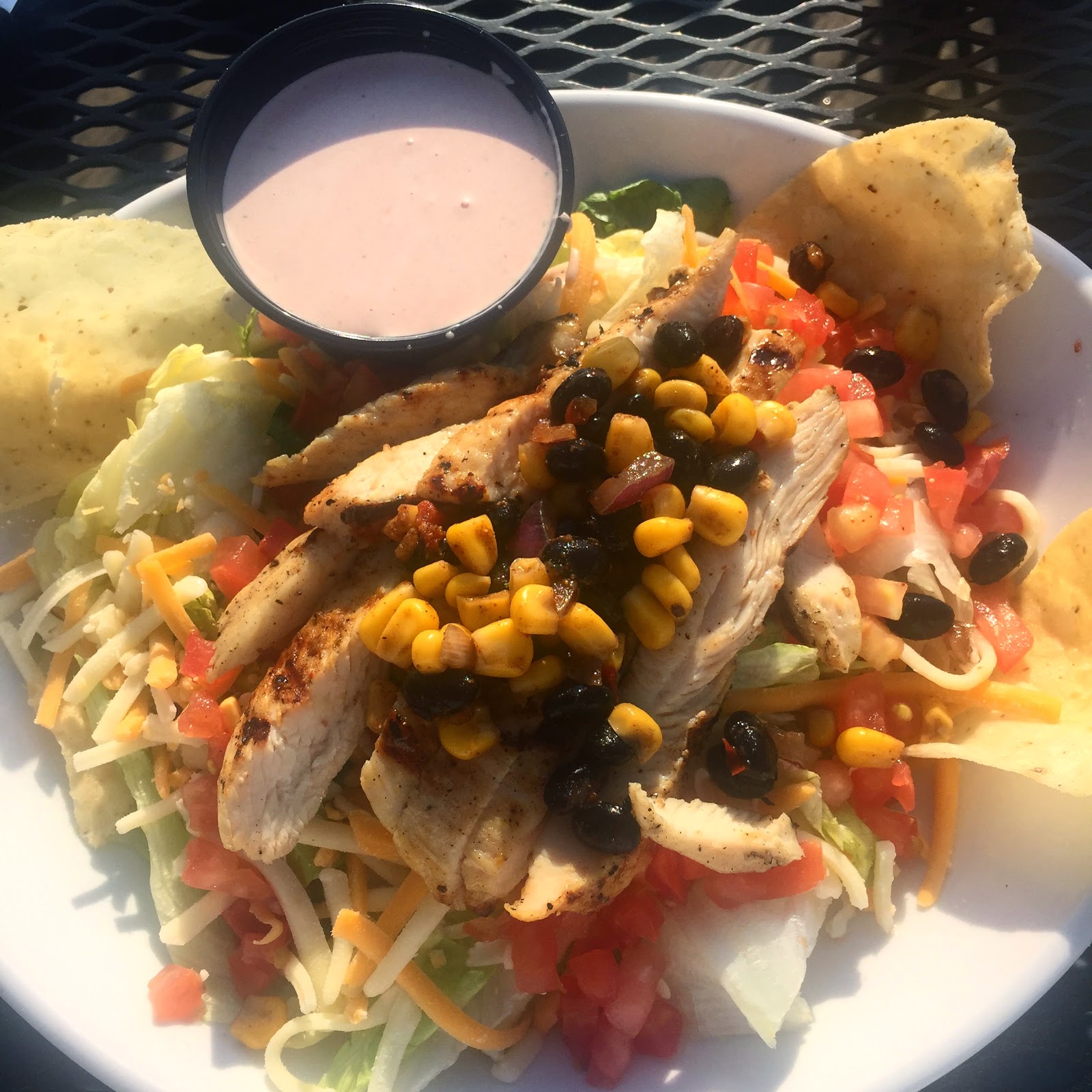 I went for the Durango Chicken Salad ($11.99). I actually went to Buckhead for a work function a couple weeks earlier and wanted this salad but ended up splitting the Fried Chicken ($13.99). The fried chicken was okay but not great – too much breading.

On this second outing – I had to get this salad. It’s got grilled honey lime chicken, tomatoes,
Monterey jack and cheddar cheese,
fresh southwest relish and handmade salsa
ranch dressing. It’s a really good salad – I have to say – a little small for $12 – but delicious. Very good choice and I’d definitely get this over the fried chicken if I had a do-over.

Why Should You Go? The view is great, the beer is cold and the food is good. The one thing we didn’t get that you HAVE to get – Cheese Boulders ($9.49). They’re LARGE balls of fried cheese – bigger than a golf ball, smaller than a tennis ball. They are by far my favorite thing on the menu – oh so good! So split those – and get the Durango – that way you’re being good and bad! 🙂