Breakfast is the most important meal of the day and I’ve become a bit of a connoisseur to the fast food breakfast. I’m not hungry when I wake up – or when I leave the house – as a matter of fact – food sounds gross at that point. But then 30 minutes later when I’m at my desk? STARVING!
So I often times stop on the way at any of the myriad of breakfast options that are at every path of my drive to work. I decided it was time to do a review and comparison. I realized on day 3 – I probably should have ordered the same thing at each place for a true comparison but I went with what my belly was craving instead. 🙂 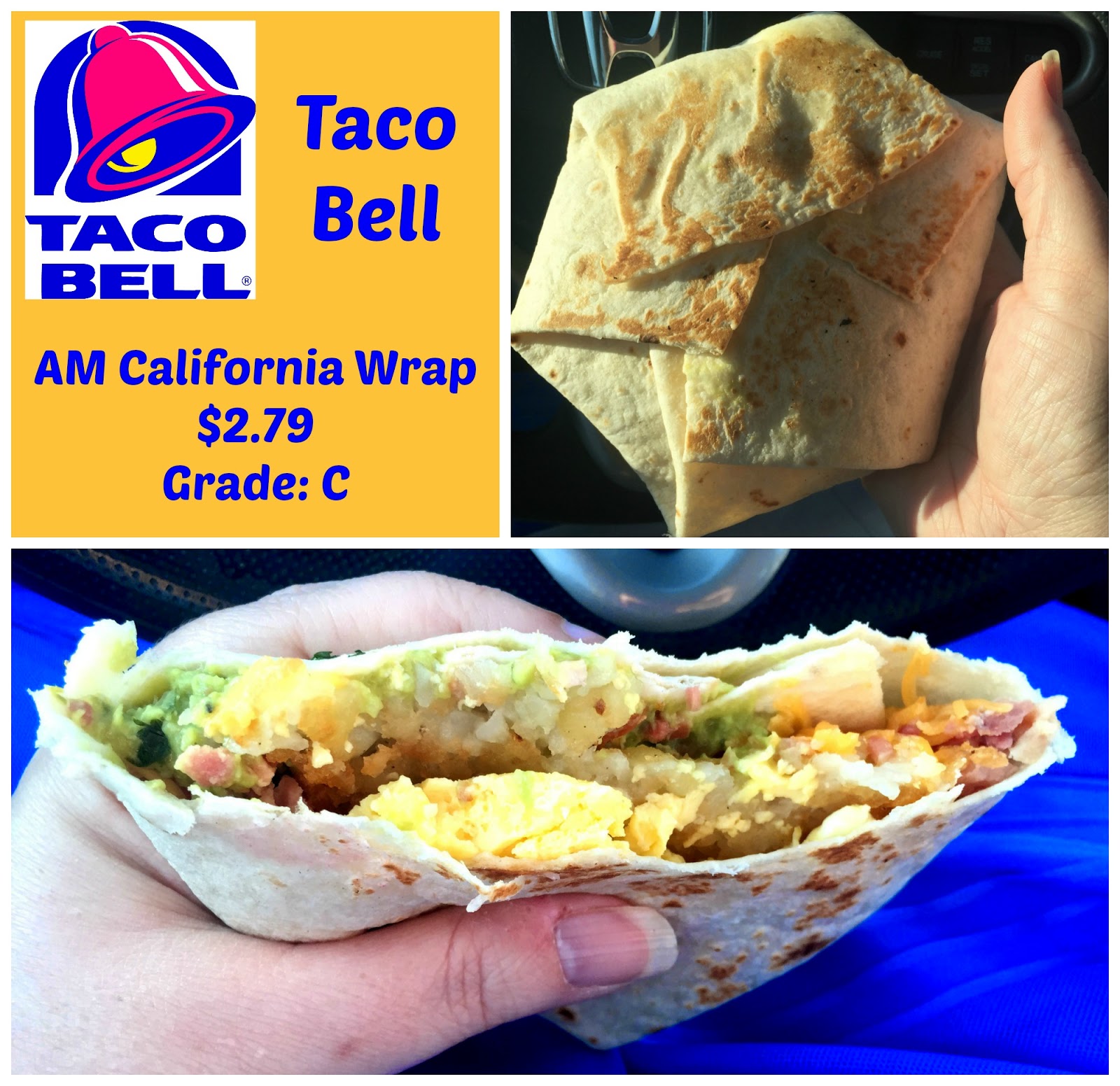 We’re going to start at the bottom. Poor poor Taco Bell. I tried their “Biscuit Taco” when it first came out and it was awful. I couldn’t even finish it. This time I went for the AM California Wrap – it’s got a hash brown, scrambled eggs, bacon, guacamole, cheddar cheese & pico de gallo.
It was kind of dry and very bland and – not surprisingly – the guac wasn’t great. All in all it was just meh and I didn’t finish it. The guac was the best part. Just because it’s breakfast doesn’t mean it HAS to have eggs – this would be better without them. 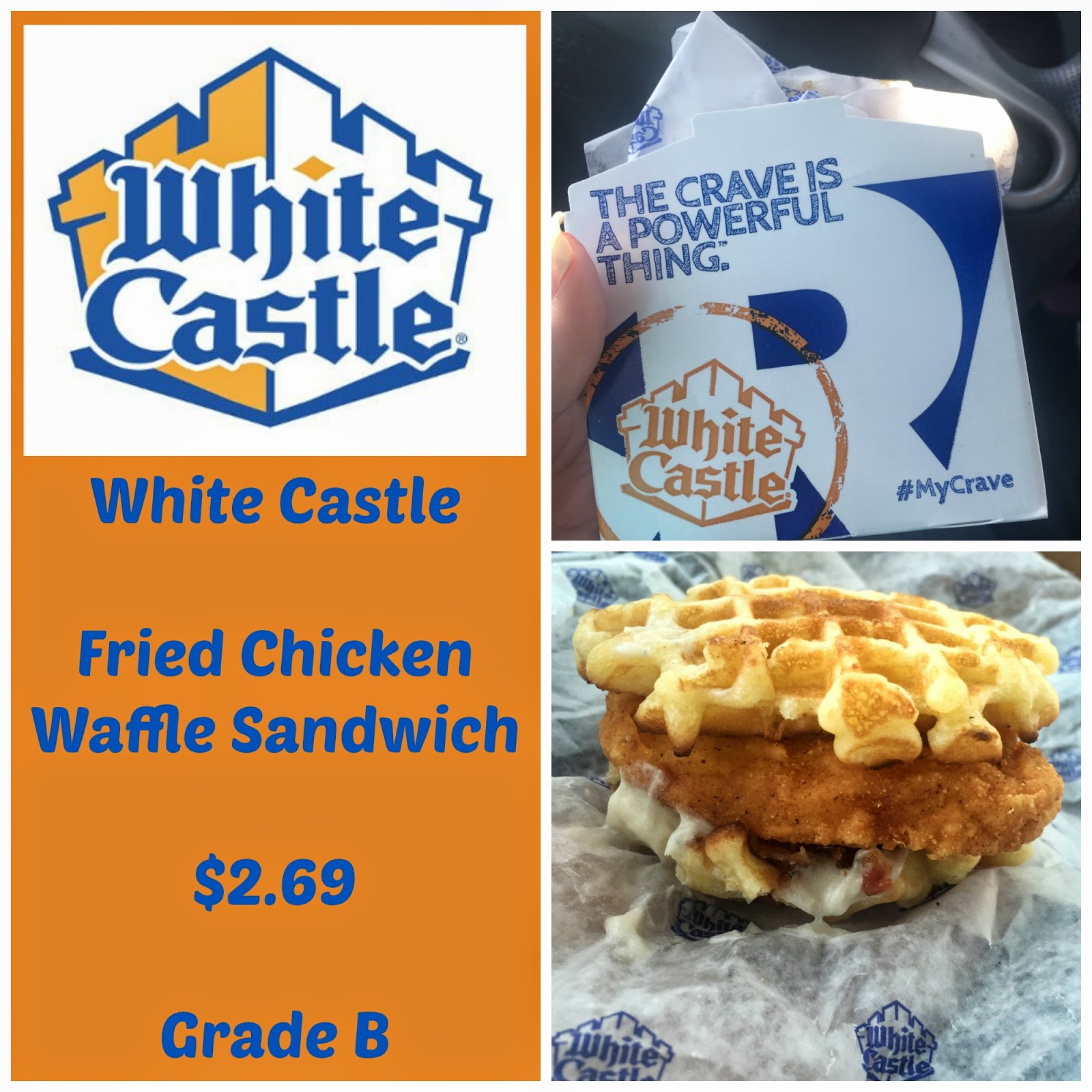 Next up – White Castle. I normally am a big fan of Whitey’s breakfasts. The eggs on their sandwiches are REAL eggs! But there was something new on the menu so I decided to try it – the Chicken & Waffle Slider – with country gravy & bacon crumbles.
This was pretty damn tasty. The chicken was moist – the gravy was sauce and the bacon was mapley. I think their waffles might have some syrup in them because I definitely tasted syrup. While I did like this and it was very unique – it gets a B for its sheer size – it’s a big breakfast sandwich – a little too big. If you’re really in the mood for chicken & waffles – it’s pretty good – and hearty! 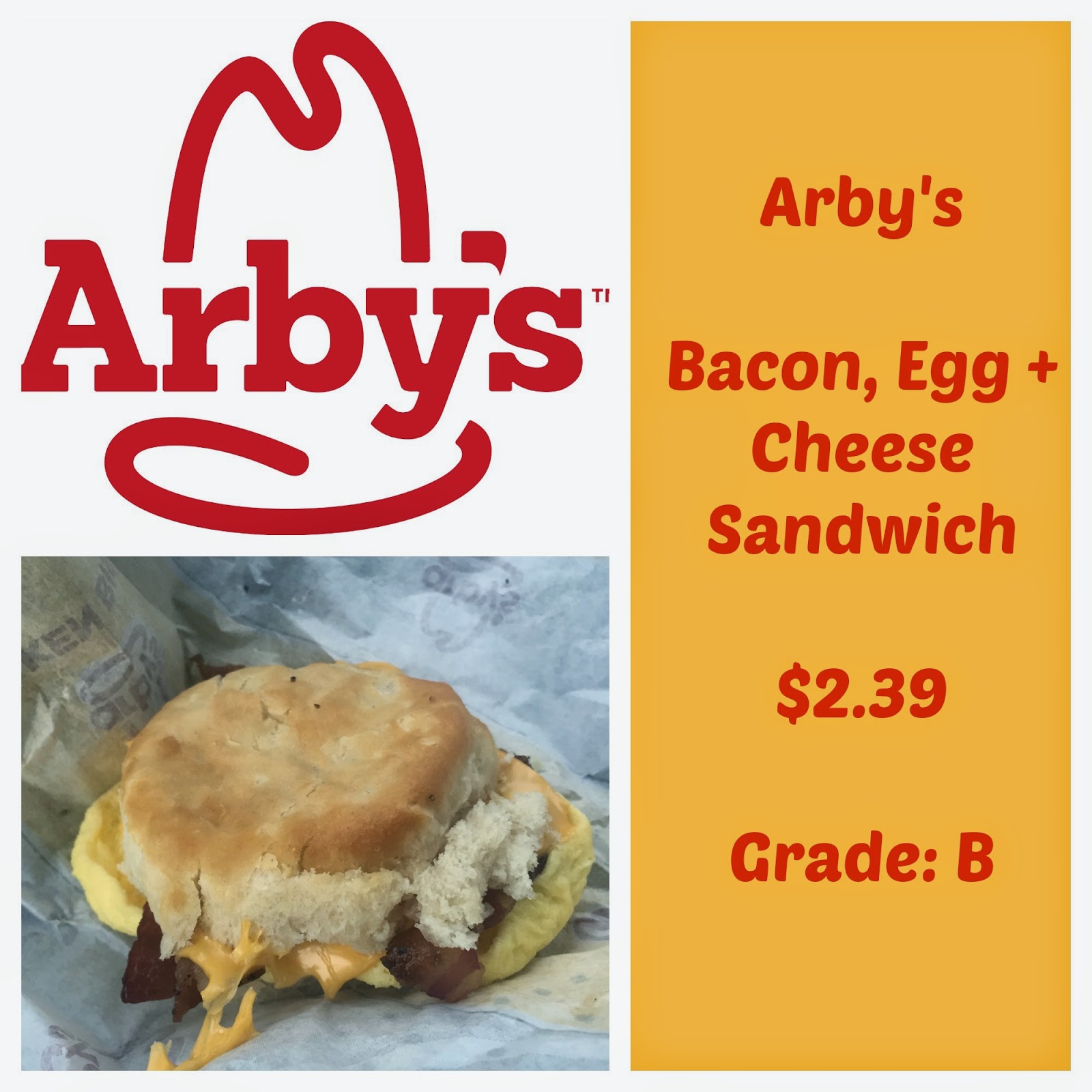 Next on the breakfast quest: Arby’s! This is the closest to my house but I’ve never been there for breakfast. I went with a straight-forward Bacon, Egg & Cheese Biscuit.

The biscuit was good and the whole thing was probably twice the size of a McD’s equivalent. I liked it – but again – too much too finish. Bigger isn’t always necessary – but a very solid option. 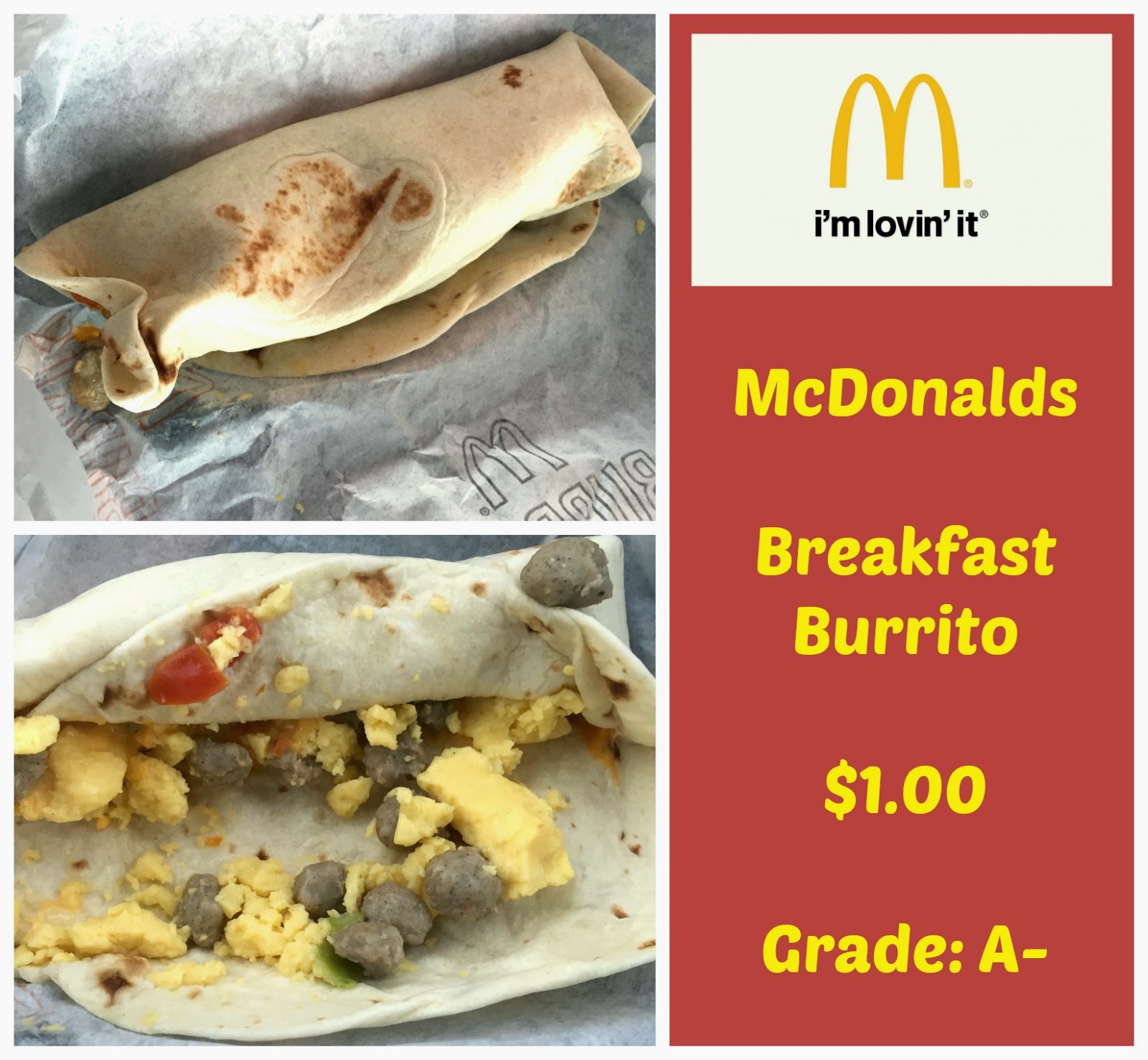 And now – my #3 selection for best fast food breakfast – McDonalds and their Breakfast Burrito. It’s got sausage nuggets (that’s a kind word – looks like rabbit poo – but tastes delish – and I mean delish in a completely crappy bad for you but way that I love), something red (tomato? pepper?) and cheese.
These are super cheap – only $1! I know – most people would hate them – but I absolutely love them. I keep thinking I’m just going to make my own and have them all ready and pack them – and then – I just keep ending up in their damn drive thru. They get an A- solely because they range in quality from fantastical to disapppointing depending on hotness and amount of cheese. 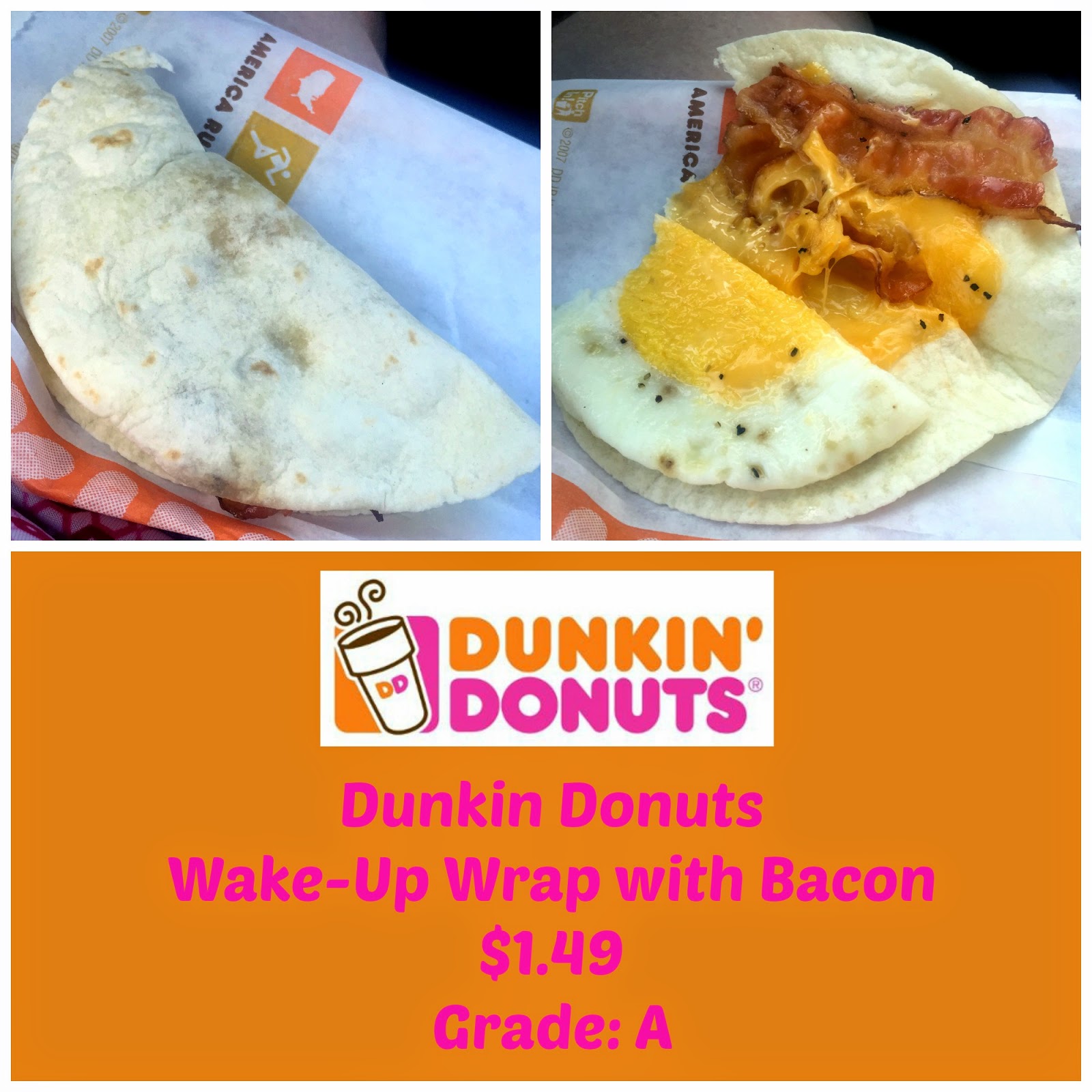 These are definitely microwaved because they come out super hot but it was still good. I like the spot of the DD because I it’s on the corner – going the way I go – so it’s super easy to do the drive thru. 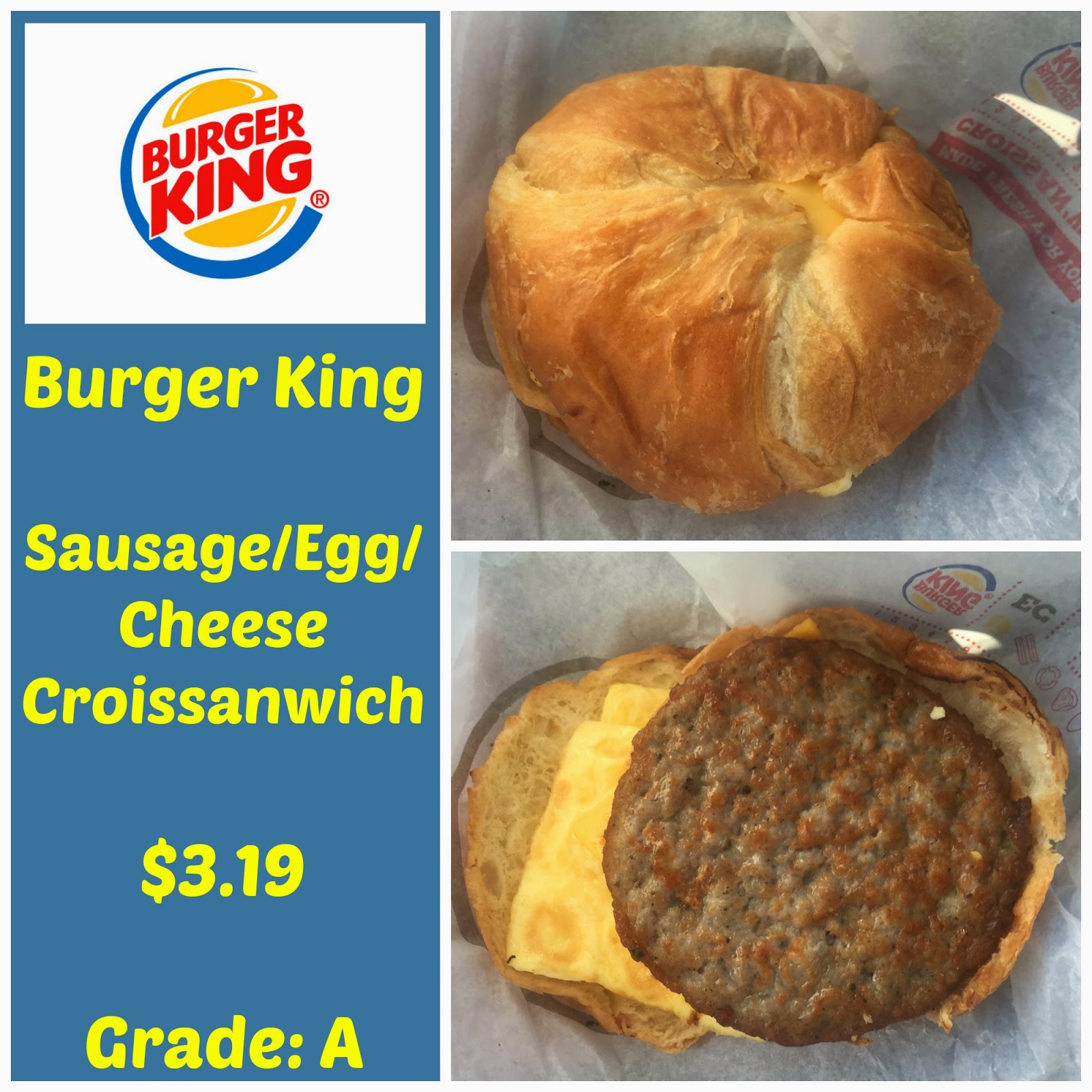 My #1 Fast Food breakfast was, is and always will be the Croissanwich at Burger King. When I buy frozen breakfast sandwiches – the sausage, egg & cheese croissant is always my go to.
This is #1 because the croissant is soft and buttery, the sausage is never overcooked, the scrambled eggs are fluffy and the cheese is melty. I love it.
So – after all of this terrible-for-me food that I ate – what do you think? What is your favorite fast food breakfast? Is it weird that I don’t feel comfortable packing milk to just have cereal? Talk to me!
Previous Post: « Restaurant Review: The Celestial & Alfio’s Buon Cibo
Next Post: Restaurant Reviews: The Gruff, Covington KY »