A few weeks ago I got invited to try the new Fire at RiverCenter in Covington. Years back – it was Behle Street – which I loved! They had a meatloaf pasta with big chunks of meatloaf instead of meatballs – sooooo good. How would this match up? Let’s find out… 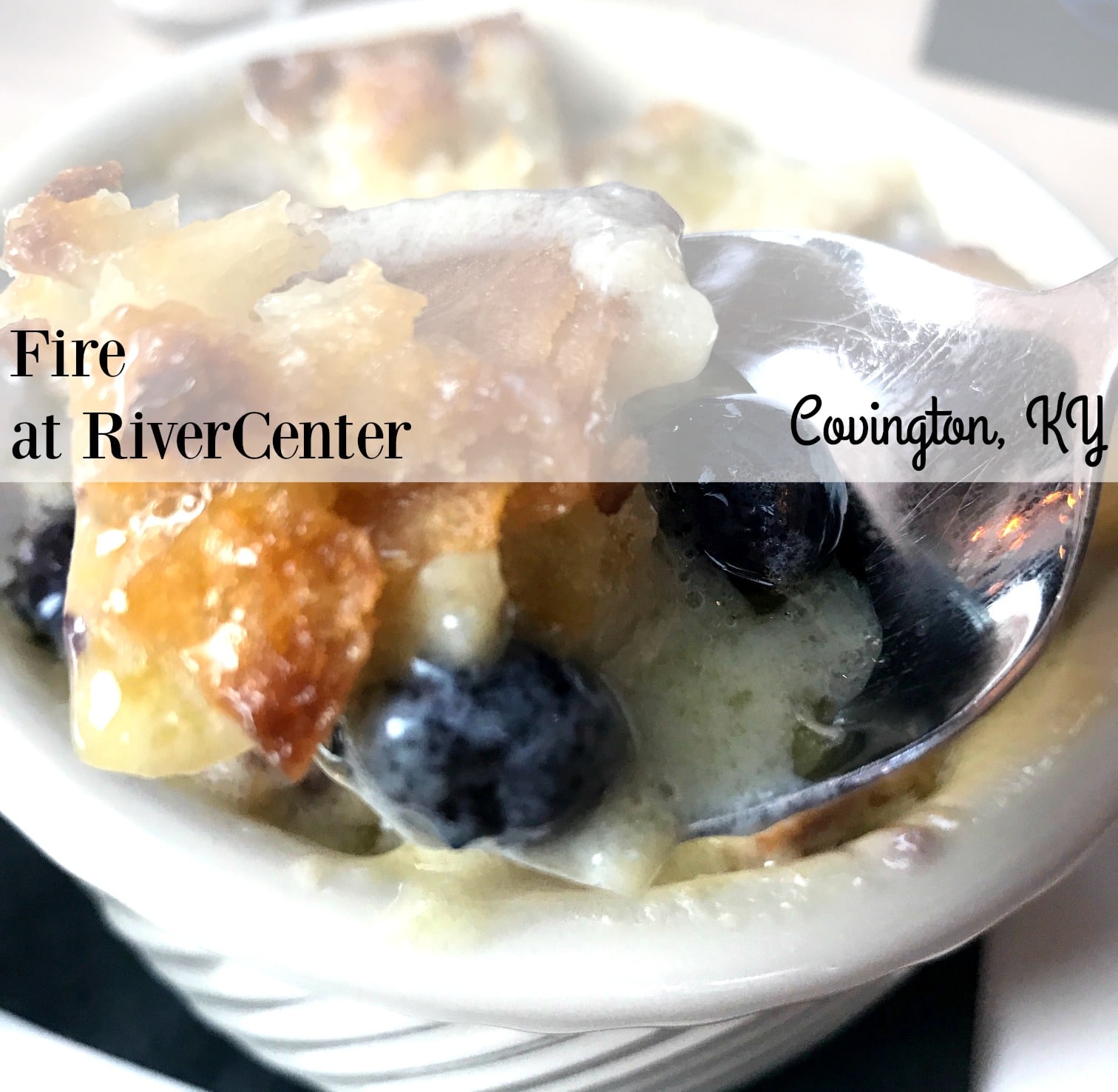 We decided to go for an early dinner – it’s a heckuva drive from Milford – so we wanted to get home at a decent time. We have to be home to watch Live PD after all! 😉 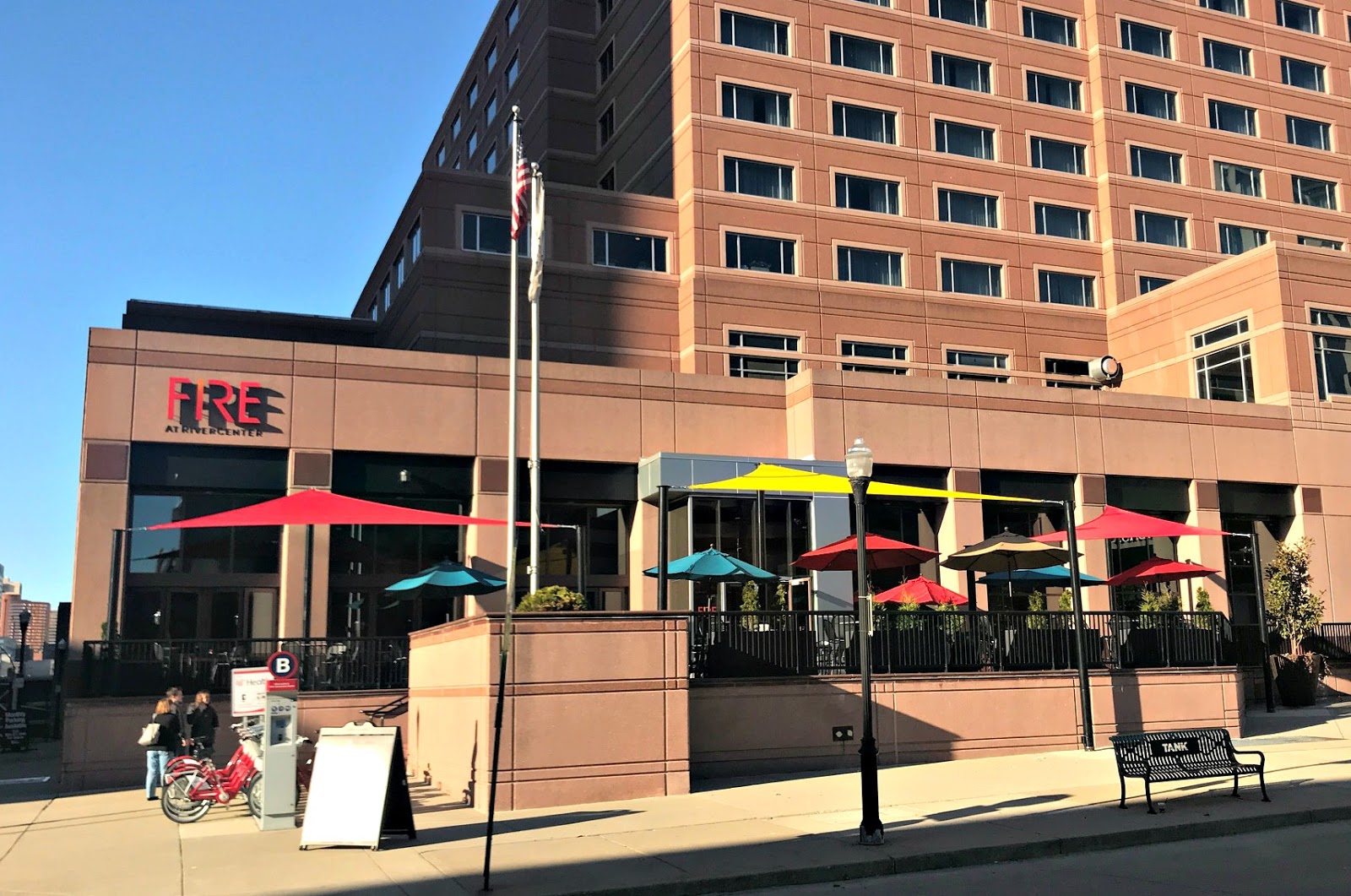 Fire is on the end spot – but there are two other new restaurants as well – Butler’s Pantry is in the former First Watch spot and Biscuits to Burgers is on the far end towards the Blue fancy condos. I wish I still worked downtown so I could try all three of them! 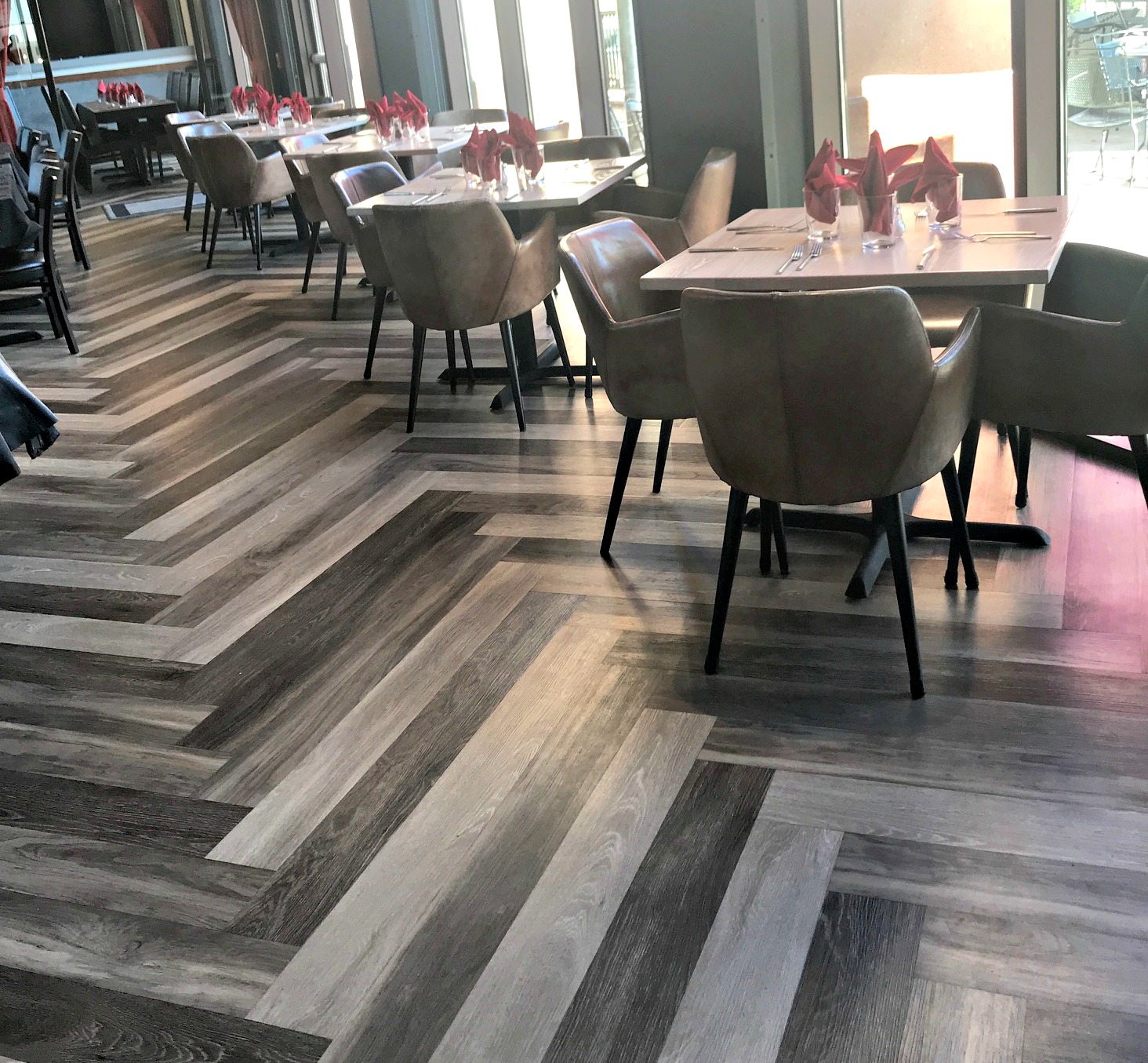 Fire has done quite a lot of remodeling since Behle Street. When you walk in there’s a bar area to the left that’s had a bit of a makeover and the dining room to the right is totally new – with a beautiful floor and a nice private room at the end of the restaurant. There’s also a huge patio out front for nicer weather. 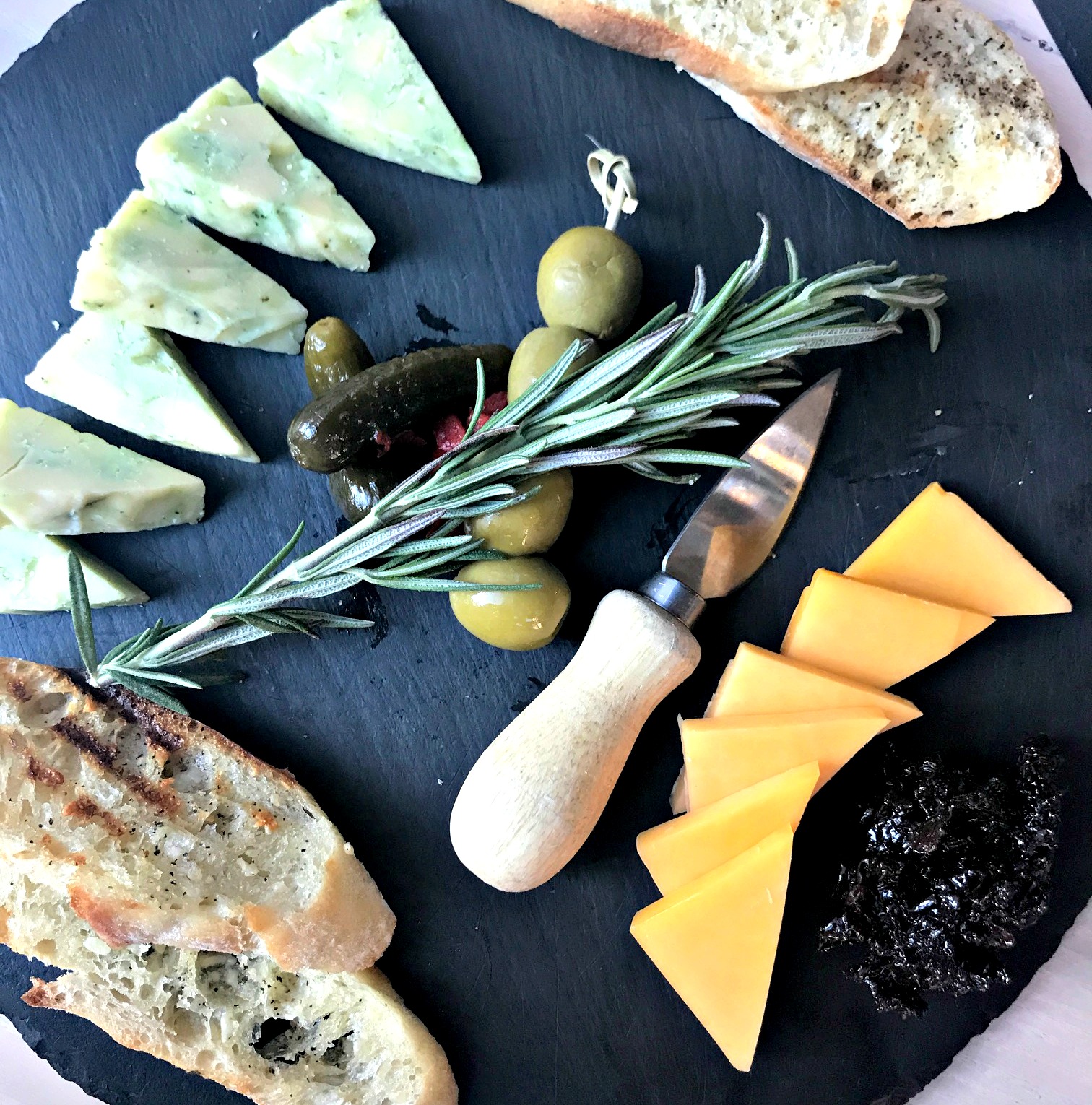 The manager seated us in the bar area at his favorite table – near the window – and we got started with the Grand Board ($12).  We had an Irish cheese at the top, a sharp cheddar at the bottom, pickles, olives, apricot/cherry preserves (near the cheddar) and fresh grilled focaccia. There was also a giant sprig of rosemary for decoration.

We enjoyed the Grand Board – especially those apricot/cherry preserves with the green cheese! But our server really had no idea what anything was. He brought the board out with no explanation so I asked for him to tell us what all we had (the cheeses change all the time) and he referred to the green cheese as a cheddar, the orange cheese as a gouda and the sprig in the middle as sage. They did bring out more bread for us as the four small pieces wasn’t really sufficient. 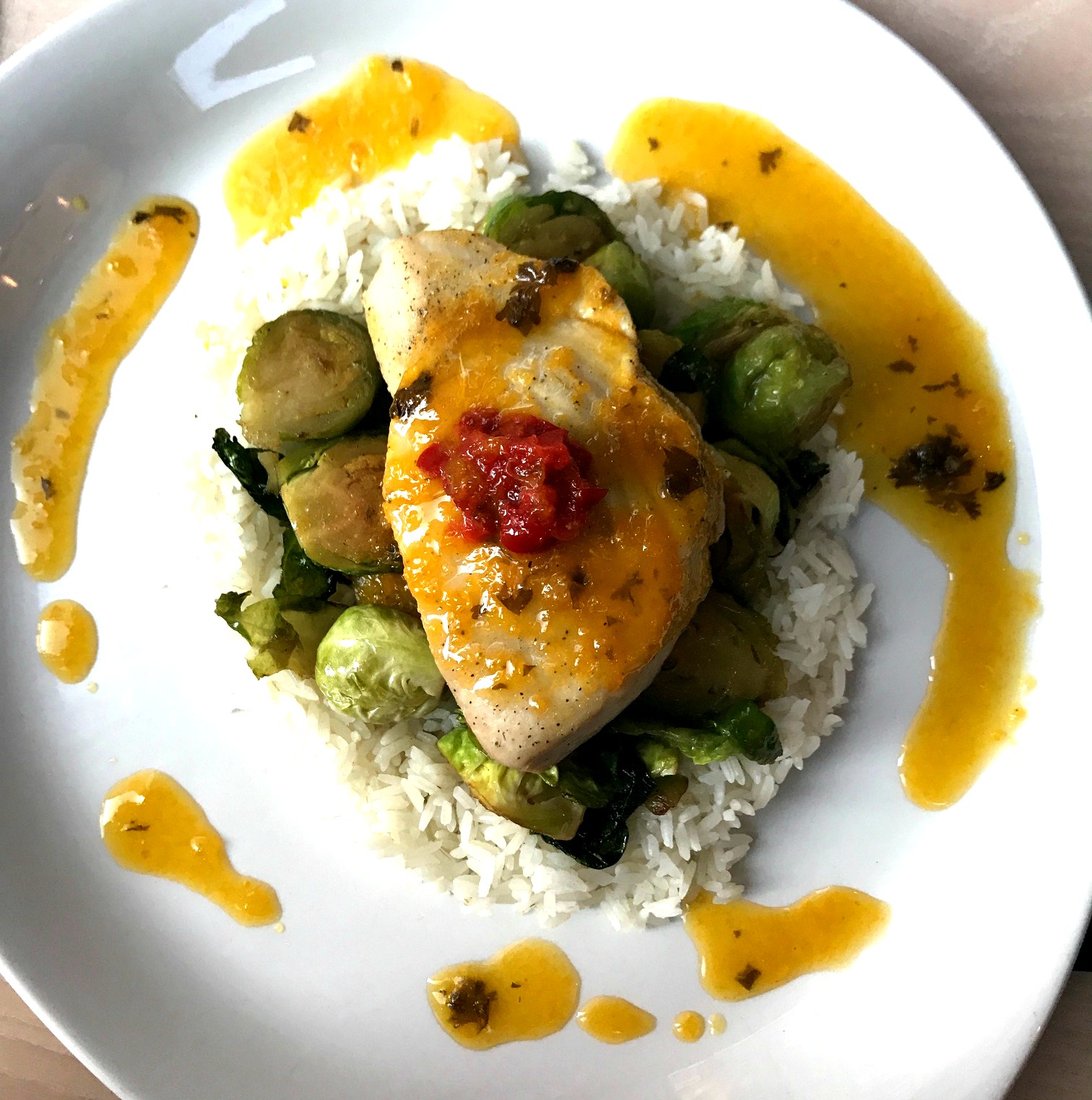 I ordered the special which was an Opah filet – you have to see the image of what the fish looks like – it’s crazy! Opah is the first fish discovered to have a warm heart – who knew?! I would best compare it to Halibut – it’s a hearty fish with a mild flavor and very popular in Hawaii.

This was served on Jasmine rice with a mango sauce. It was on the menu with asparagus but I saw that they had caramelized Brussels sprouts on the menu and asked if they could sub those. I didn’t realize they were under the fish or I probably wouldn’t have subbed.

The fish was perfectly cooked and the dish was beautiful. Unfortunately I didn’t love the dish overall. It was extremely underseasoned. The rice was plain, the sprouts were plain and the sauce was missing acid/salt. It was an OK dish but nothing to rave about. I did like trying a new fish I’d never had before though. 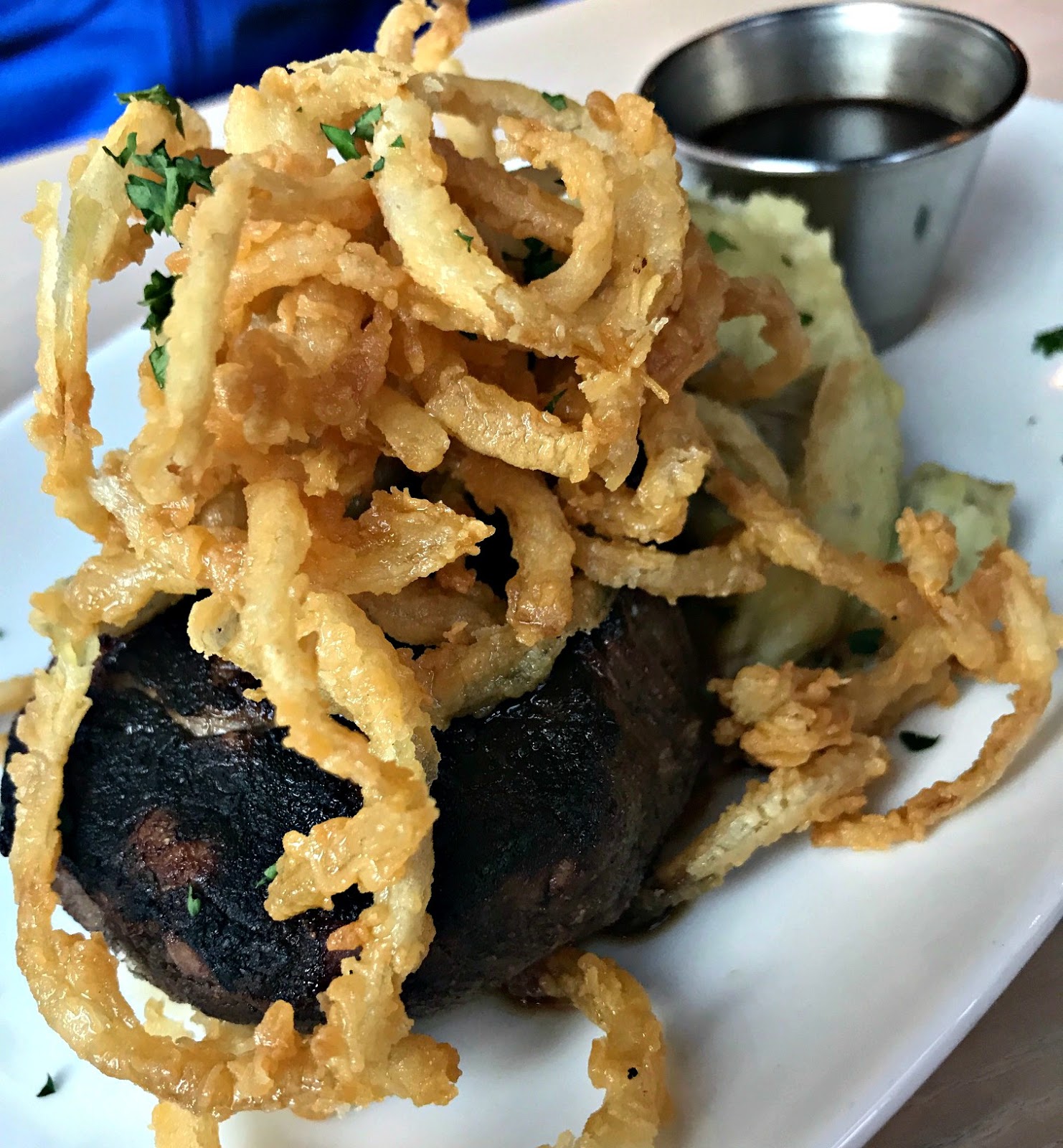 My husband got the Filet Mignon ($28) which was a 6 oz. Black Angus center cut topped with onion straws (sans bordelaise sauce) and served with garlic mashed potatoes and a veg. The steak was prepared correctly to medium rare and was fine. The onion straws are a recent favorite of my husbands and were tasty. The sauce they served wasn’t really a steak sauce or Worcestershire – not sure what it was but we didn’t love it. 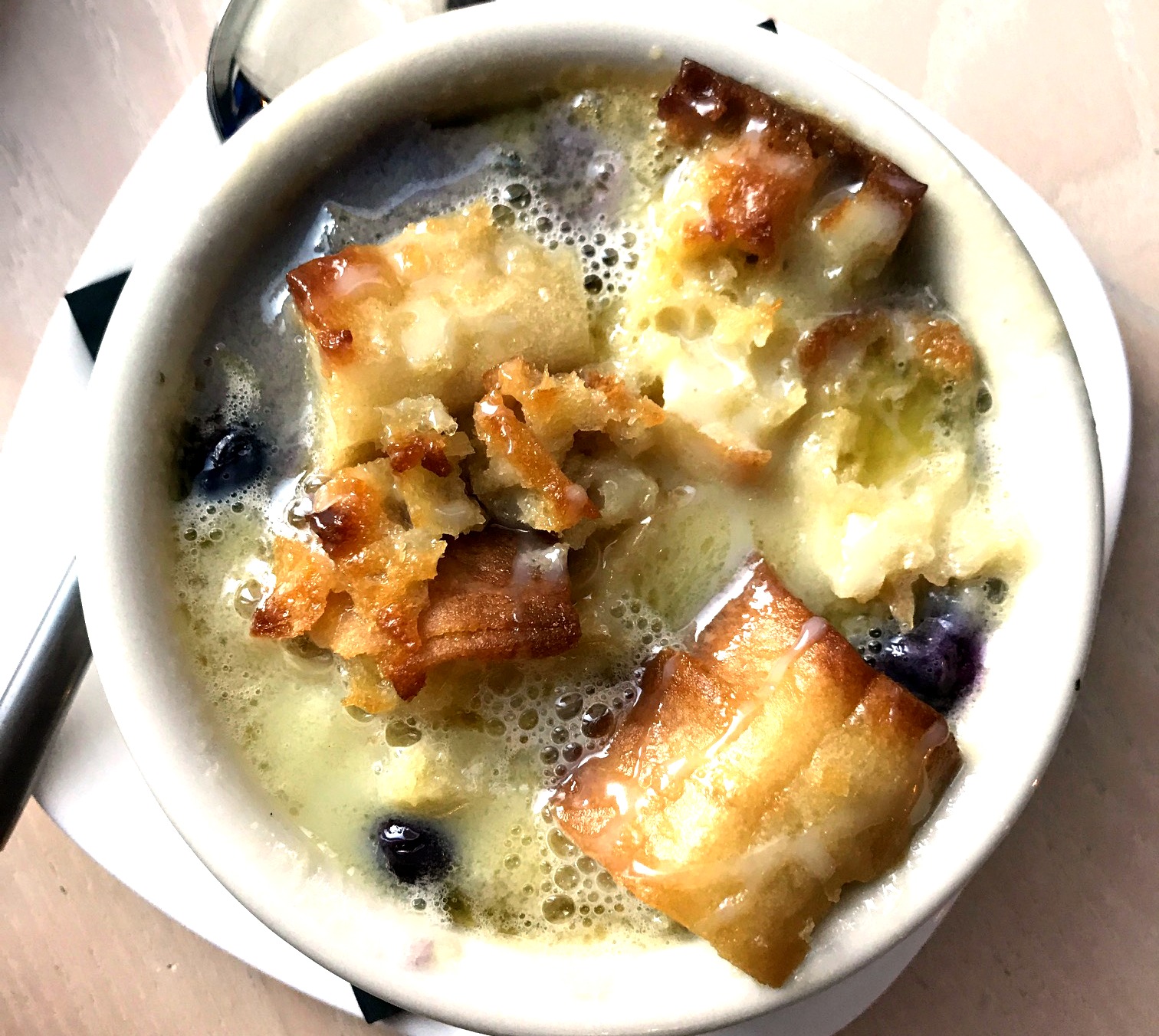 Lastly I went with dessert and chose White Chocolate Wild Blueberry Bread Pudding ($7). Larry wasn’t able to have any desserts with his egg allergy.

Unfortunately I didn’t care for this – it was really soupy – as you can see – the bread pieces out of the soup were hard and it was just too sweet. I ate a few pieces of the soaked bread and blueberries but left most of it. It wasn’t the most appetizing looking either – this is one I think they need to work on.

Why Should You Go? I’m sure there are some items on the menu that are worth the visit – but I just didn’t find them myself. The prices were high for the food and service we received. In comparison to my recent visit to Prime Cincinnati – I preferred that experience. That said, Fire is new and they have a big menu so I have more things to try.

Be sure to check my Facebook page this week for a giveaway!