I was bound and determined to make the Big 4-0 a happy and fun birthday! I went to Terry’s Turf Club for lunch, saw my good friend’s brand new baby boy, got a pedicure with another friend and capped it all off with dinner with the hubby at someplace I’ve wanted to go for a long time – The Melting Pot. 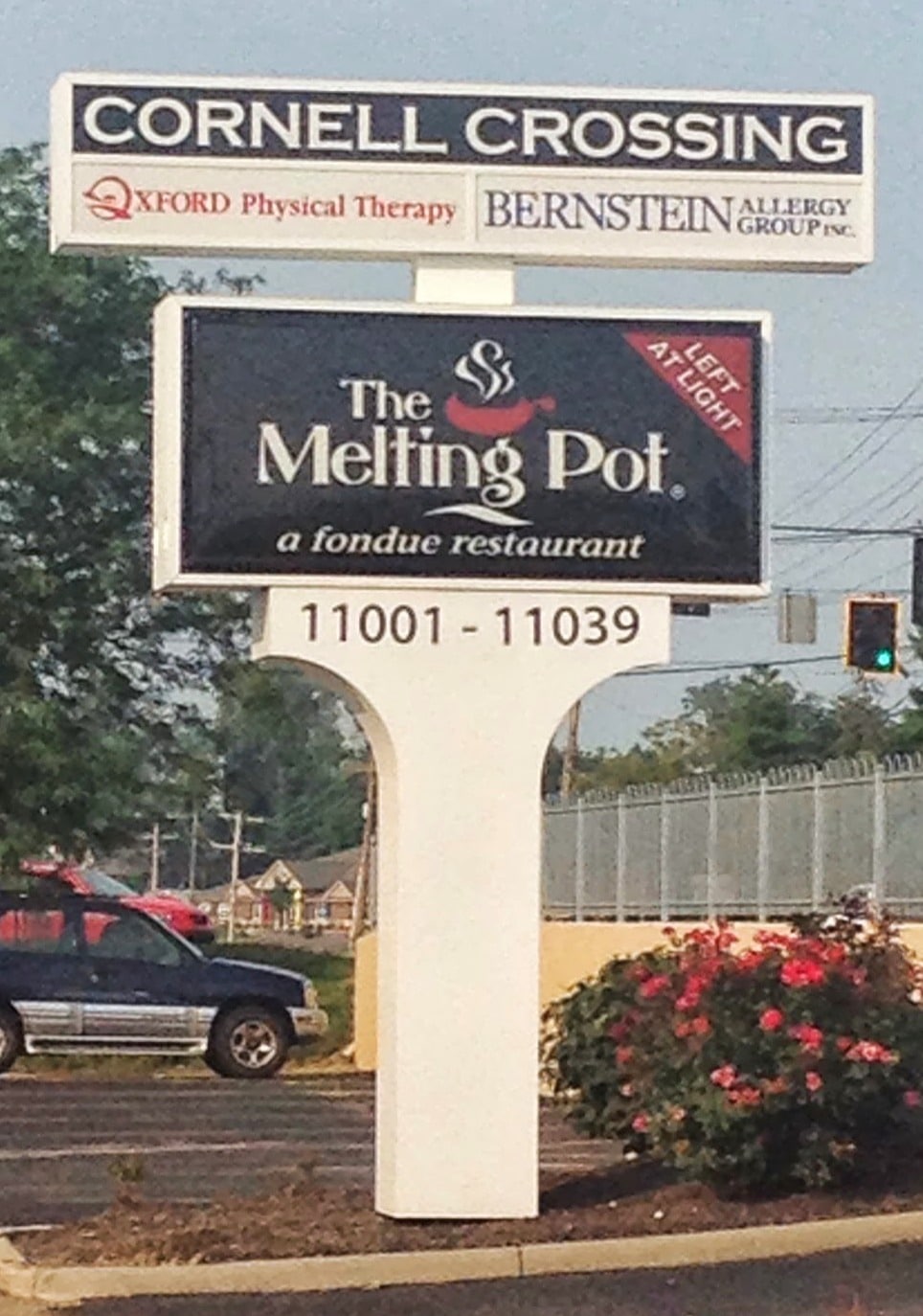 The Melting Pot is located in Montgomery right off 275 on the north side of the city. And – to keep all of you going through this review – there’s a $125 GIVEAWAY waiting for you at the end! 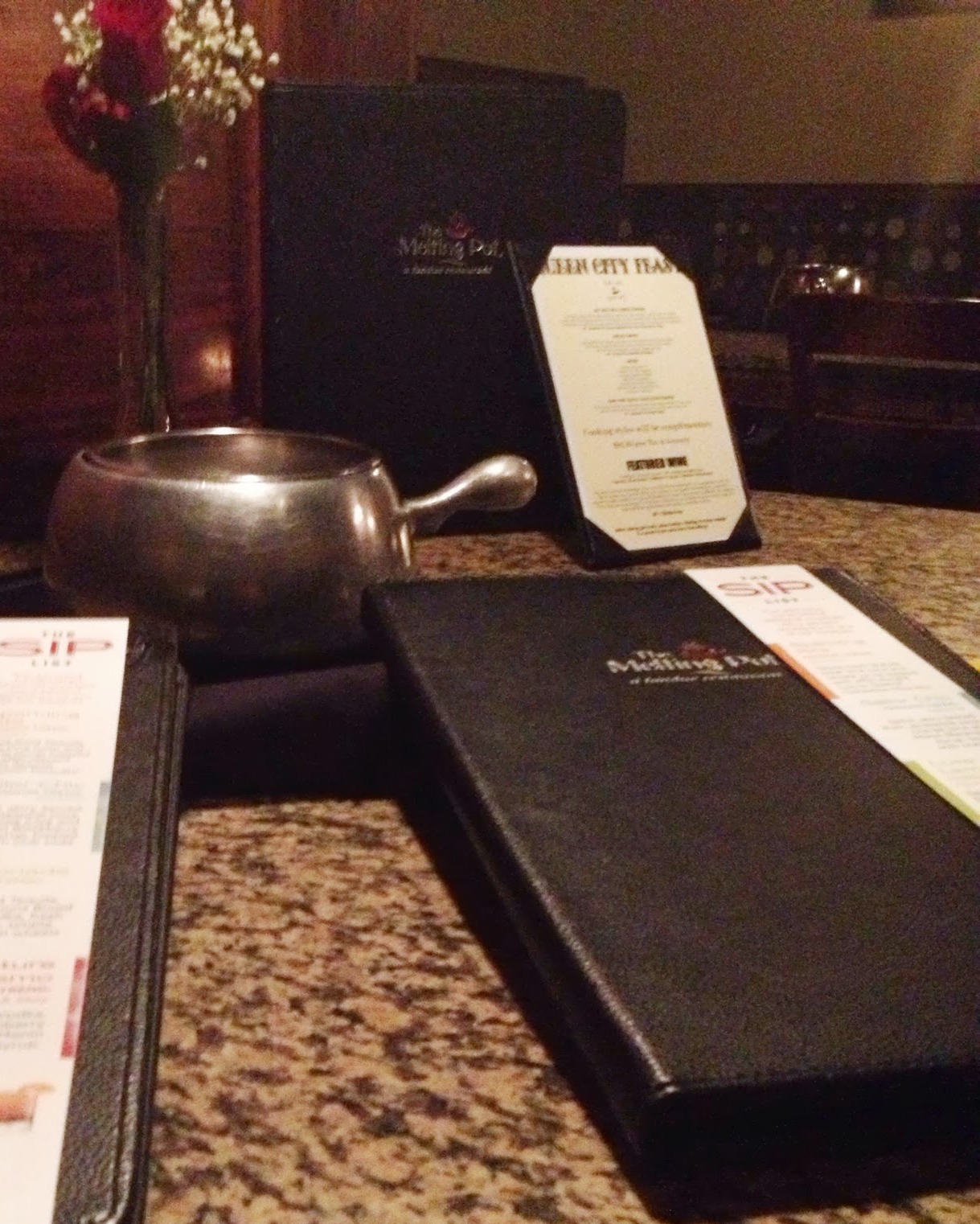 We were seated in a cute private booth in the back. There were flowers on the table and an array of menus along with the hot plate. 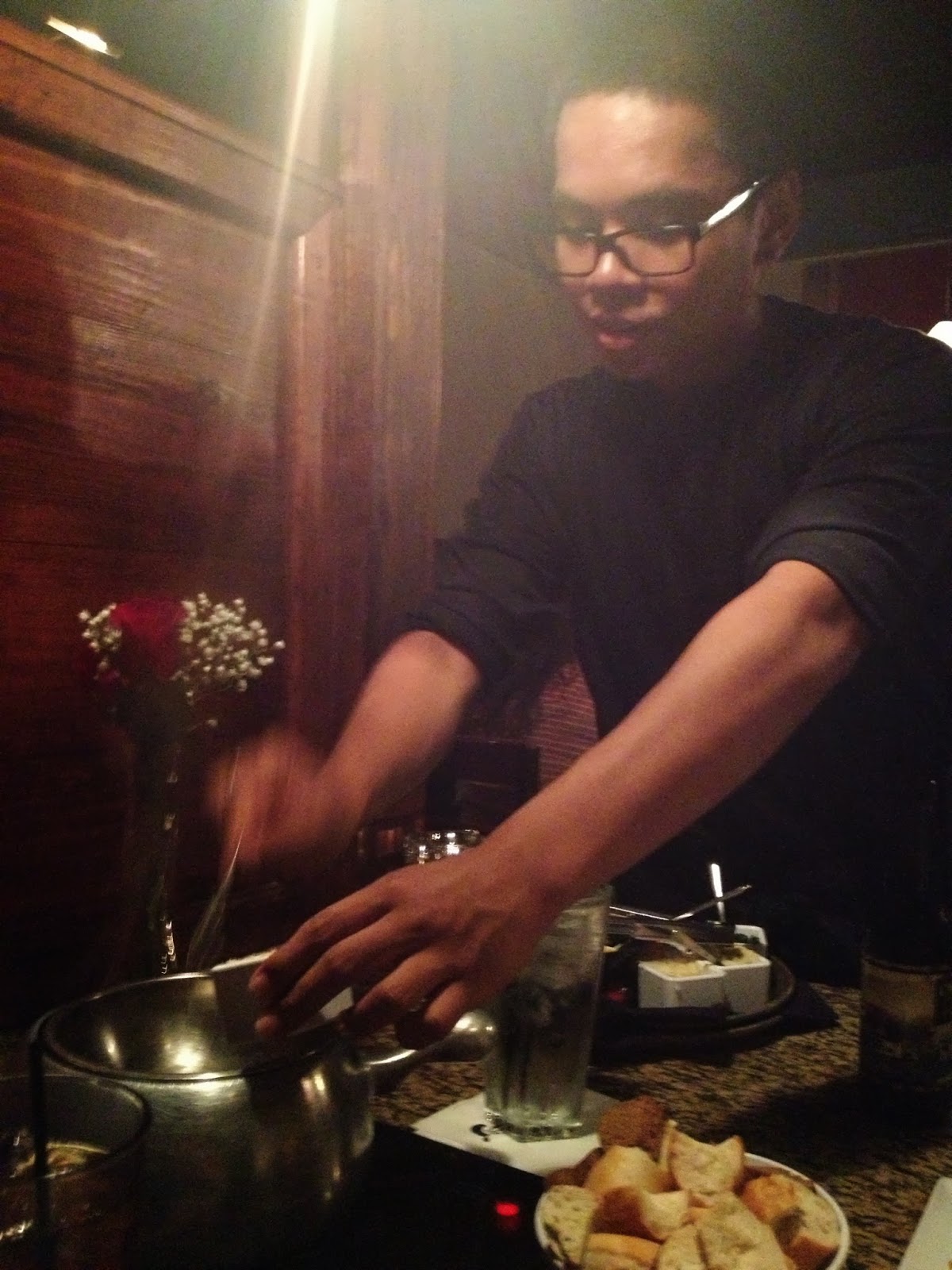 Our server John was wonderful! He chatted with us about how long he’s been there and how he’s worked his way up to server. He has a great personality and did a great job of cooking for us! 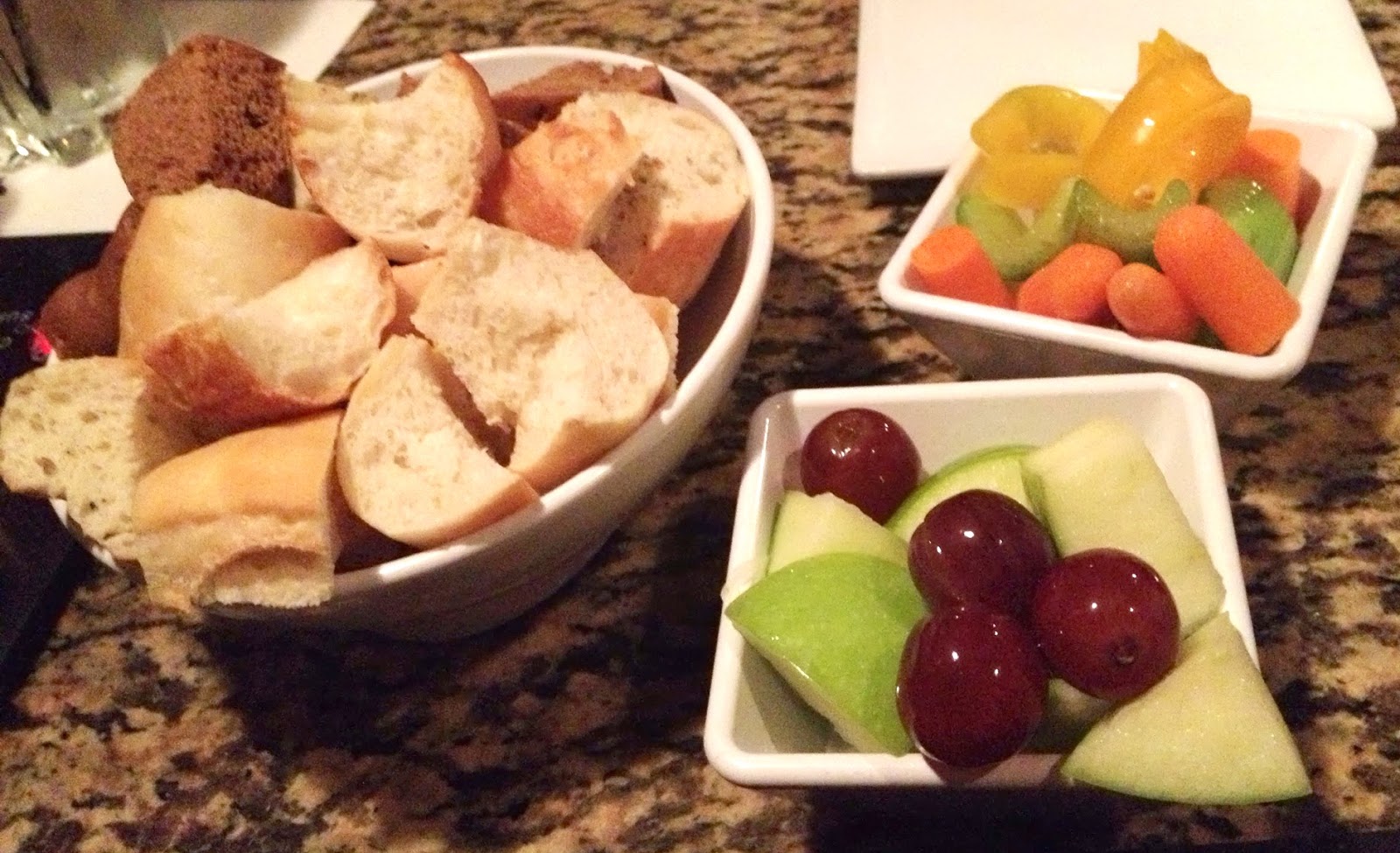 The first course was bread, fruit and veggies with our choice of a cheese dip. The bread was pretty heavy and not really soft by any means – but I’m guessing soft bread would just fall apart in the cheese dip. The apples were great – but the grapes were a little delicate. There were multiple cheeses to choose from – but John our server said to only pick the Swiss if we REALLY like Swiss. So… 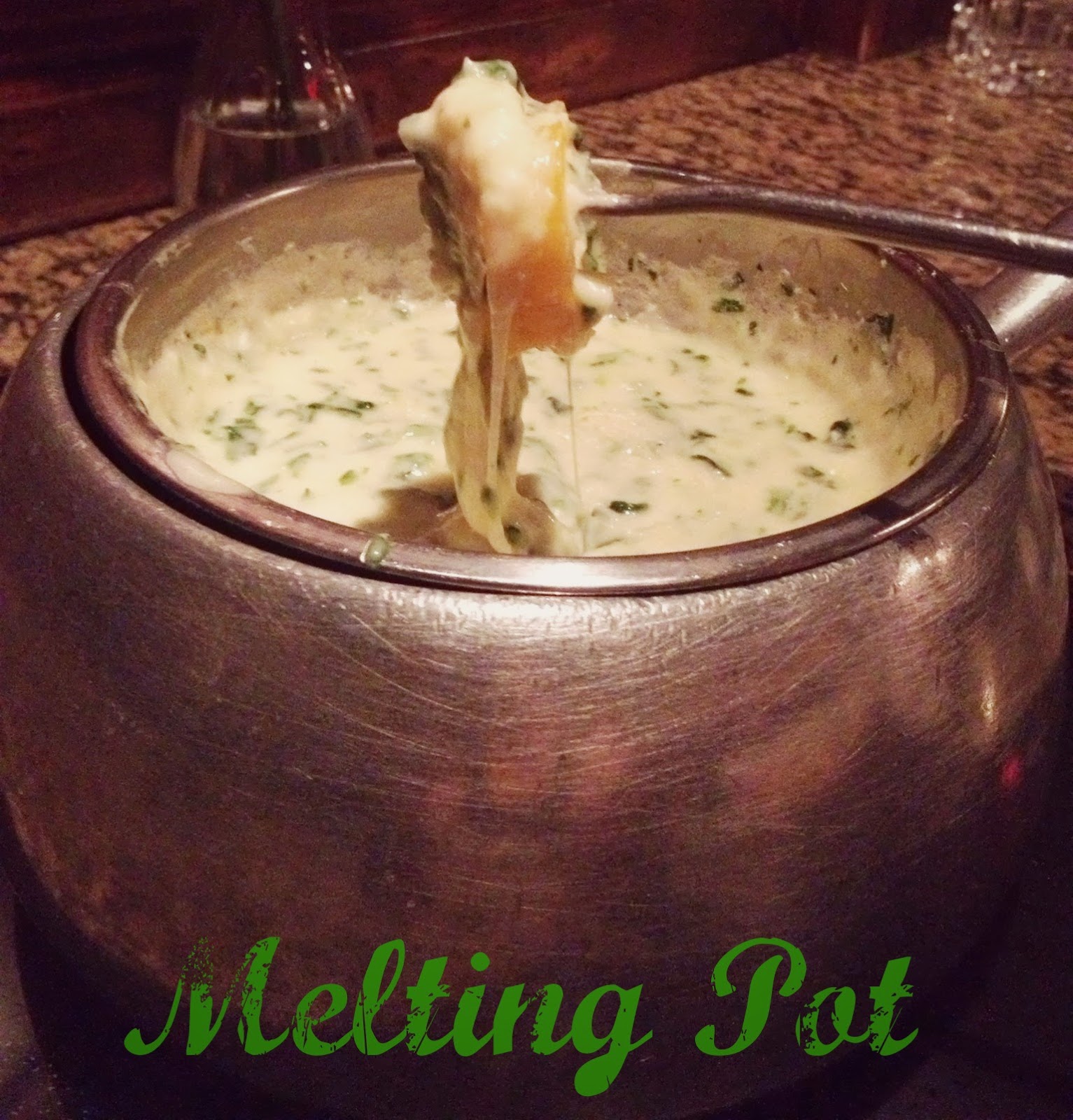 …we went for the Spinach Artichoke. It was really cool that he made it right there for us. Definitely made you feel good about knowing what ingredients are going into your food – and no worries of eggs! The dip was very thick and rich – but good. I would have liked to try a more traditional cheese but this was a good option. 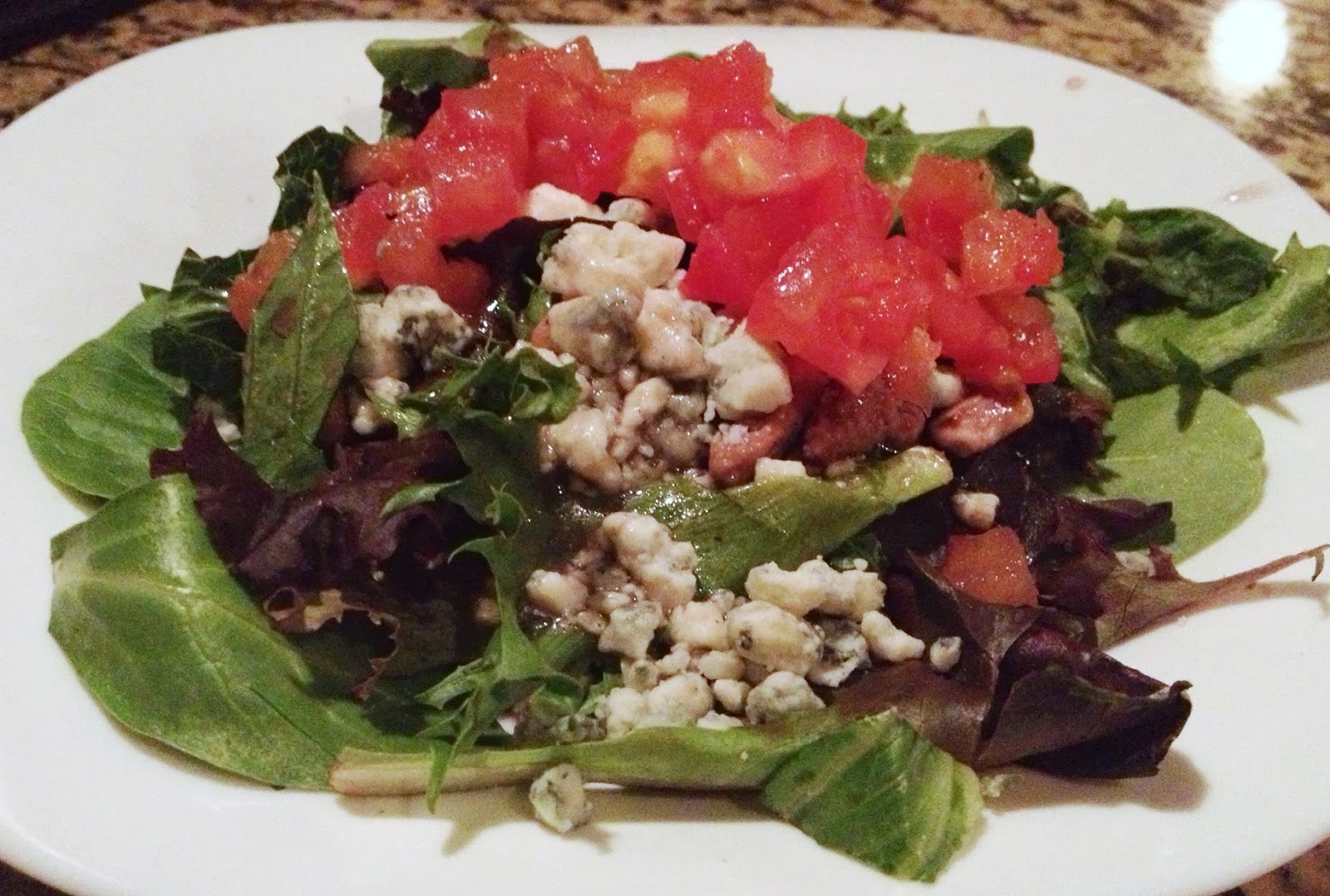 Next up were the salads – Larry chose the California which had mixed greens, roma tomatoes, candied pecans, gorgonzola and a raspberry black walnut vinaigrette. It was kind of hilarious because he’d never had any sort of blue cheese before. So watching him eat the first bite was priceless. Needless to say – he wasn’t a fan. But it was SOOOOOO worth it! 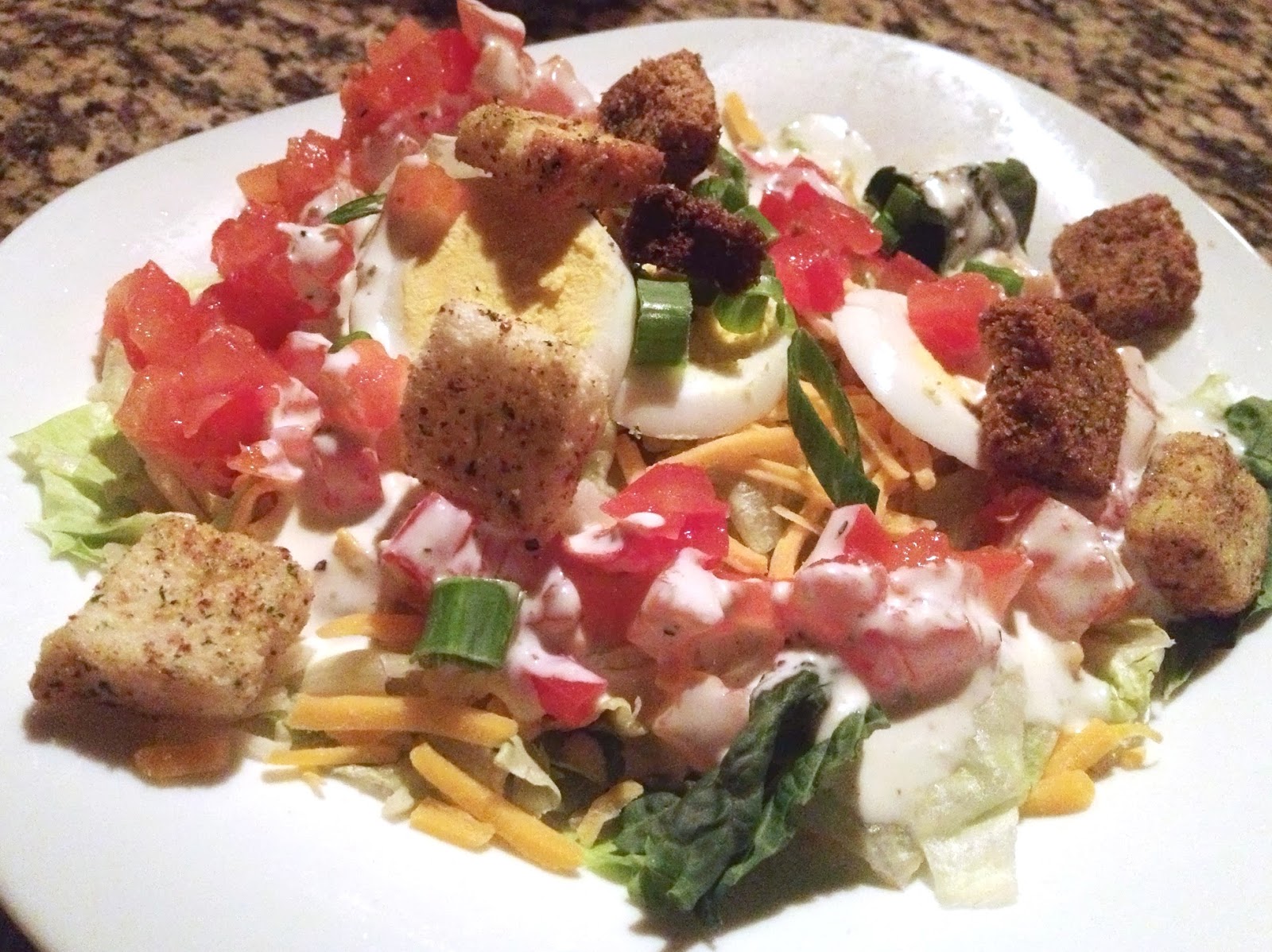 I went for the House which was really good – there were a lot of toppings (croutons, egg, cheese, tomatoes) and their ranch – which was a really good ranch! (Bonus points for sure in my book)

I also sprinkled some of their signature Garlic & Wine seasoning on my salad – it added a little zing to it. 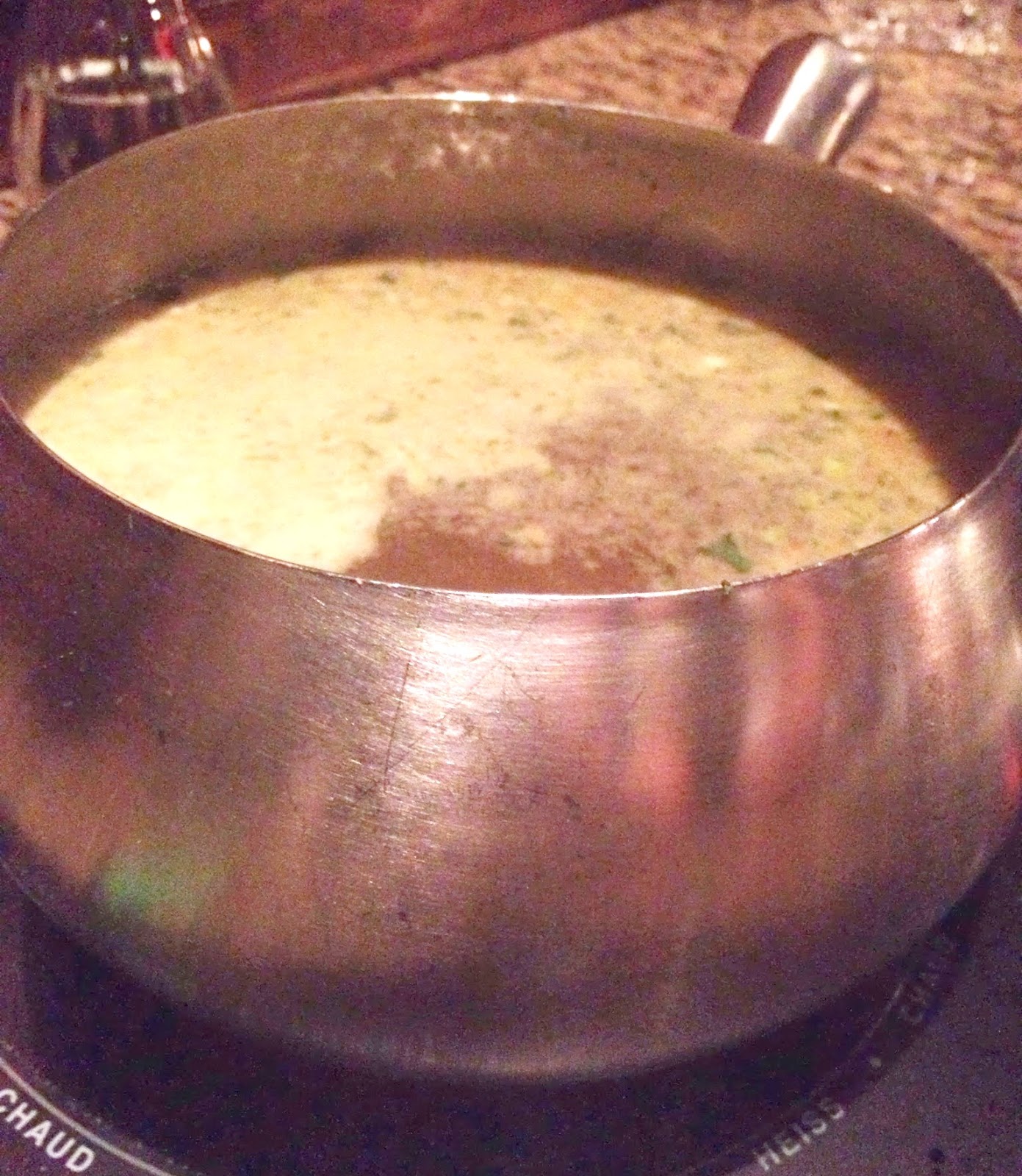 Next up – we would choose our entrees and our cooking style. You can choose from a bouillon, mojo caribbean, coq au vin or bourgignonne (with batter). Per John’s reco – we just went with the complimentary bouillon since all of the meat was flavored as well. 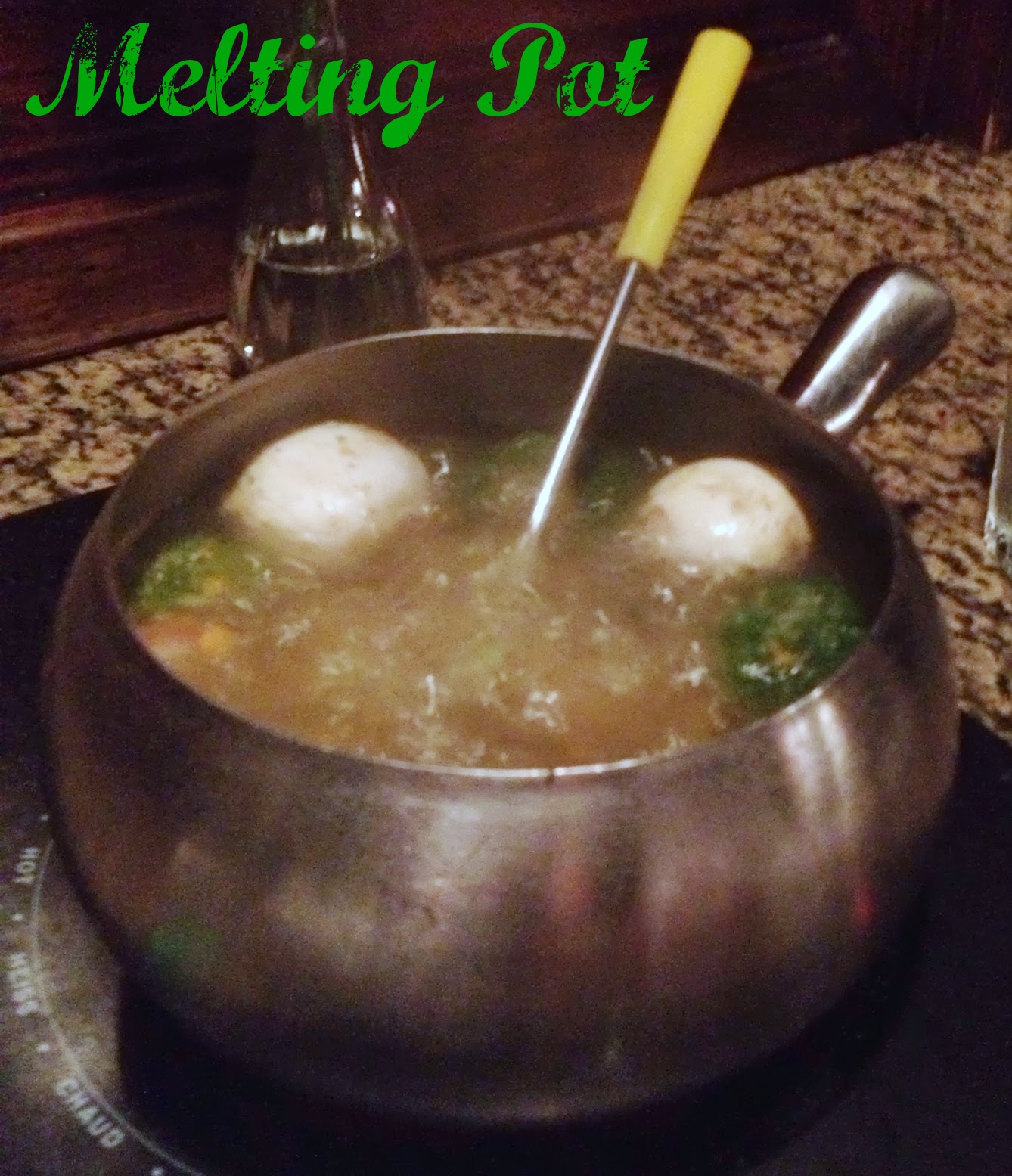 They brought out a bowl of broccoli, mushrooms and potatoes as well that we could drop in the boiling bouillon. They cooked up nicely and there was plenty of them. 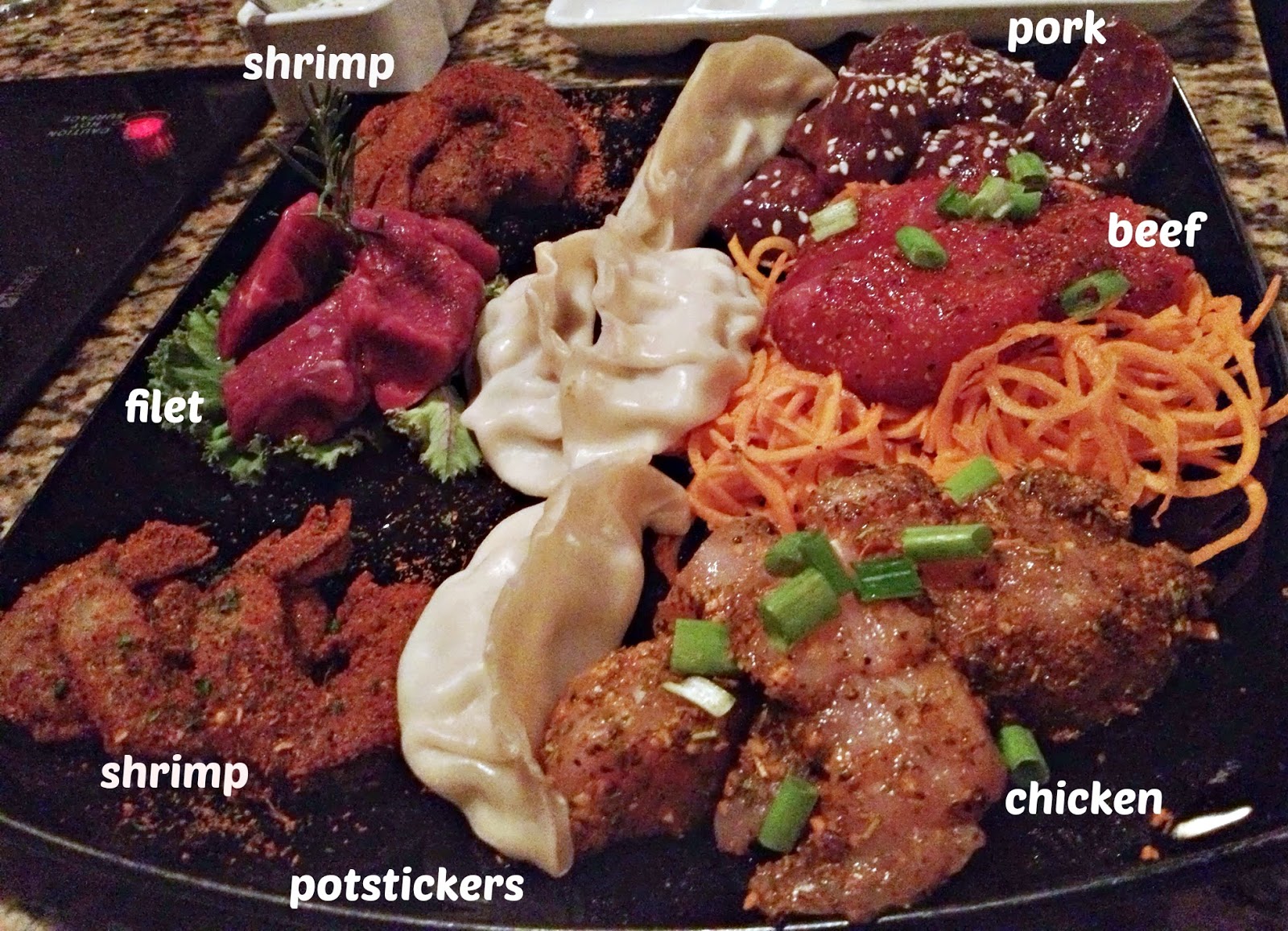 For the meat – we’d gone for a Queen City special that had a wide array of different meats. Most of them were heavily (maybe a little too) seasoned. My favorites by far were the filet, shrimp and potstickers. The pork, chicken and beef were dry and not near as good.

On a return trip – I would simply go for filet & seafood without seasoning and really enjoy them. 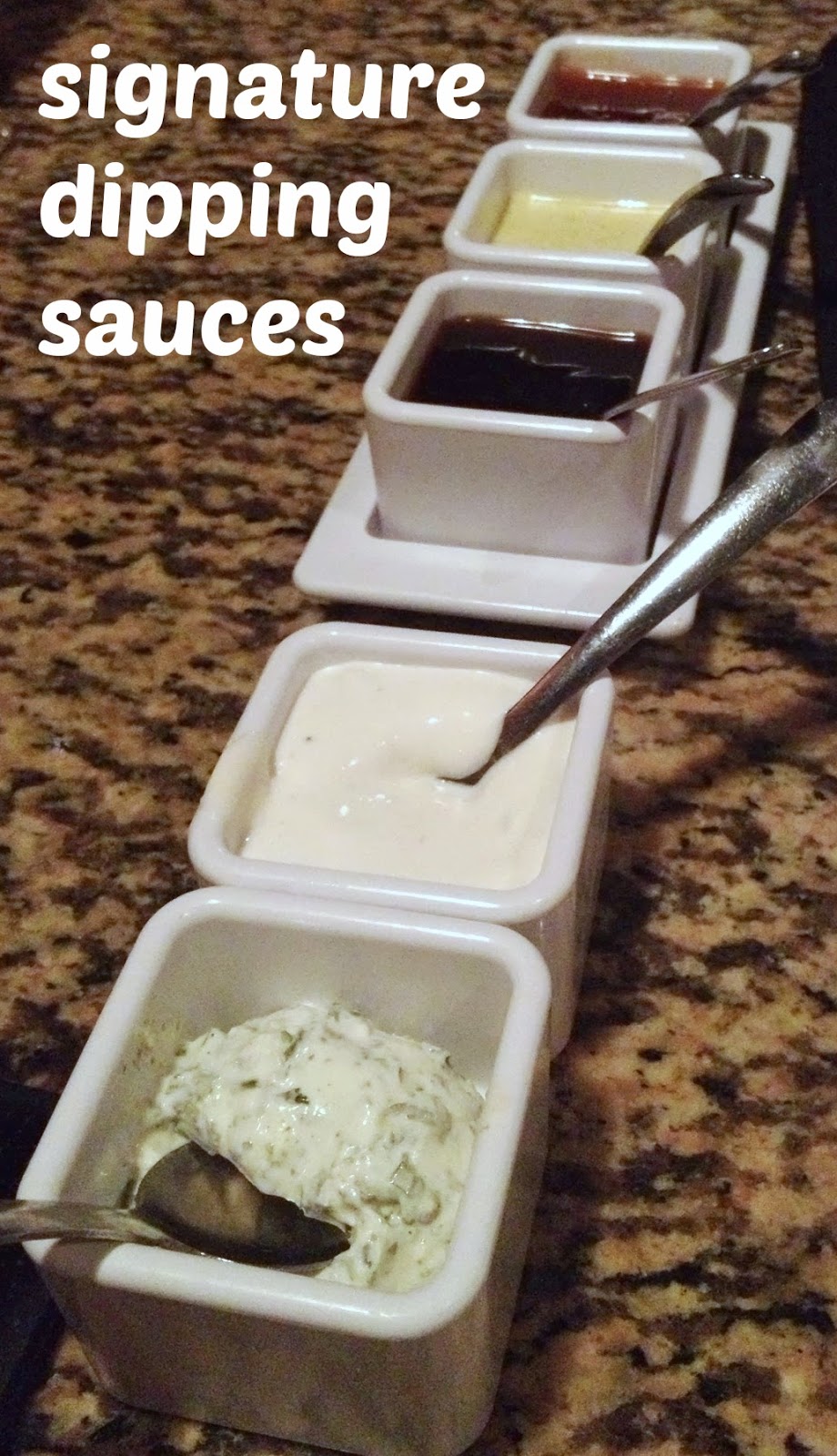 They also provided dipping sauces and I don’t remember them all – there was a yogurt, a gorgonzola (which wasn’t near as offensive as the plain cheese is), teriyaki, curry and something else. They were okay – but I liked trying the meat on it’s own. 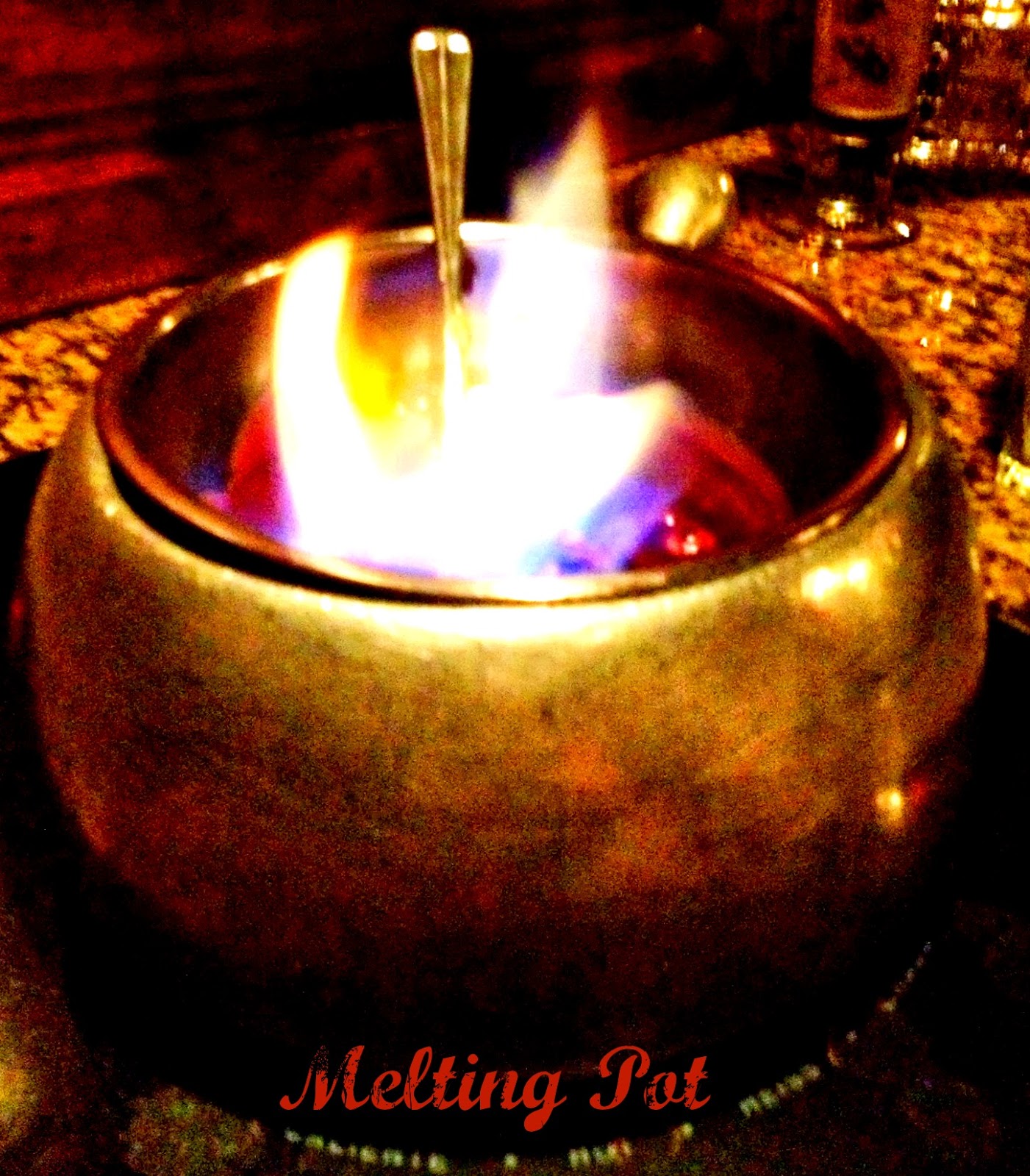 Next up – DESSERT! There are multiple kinds of dessert fondues to choose from as well – chocolate, white chocolate, peanut butter & chocolate, flaming turtle (um seriously), smores, bananas foster and more – you can even create your own! They bring out the pot and light it on fire before you get to start dipping. 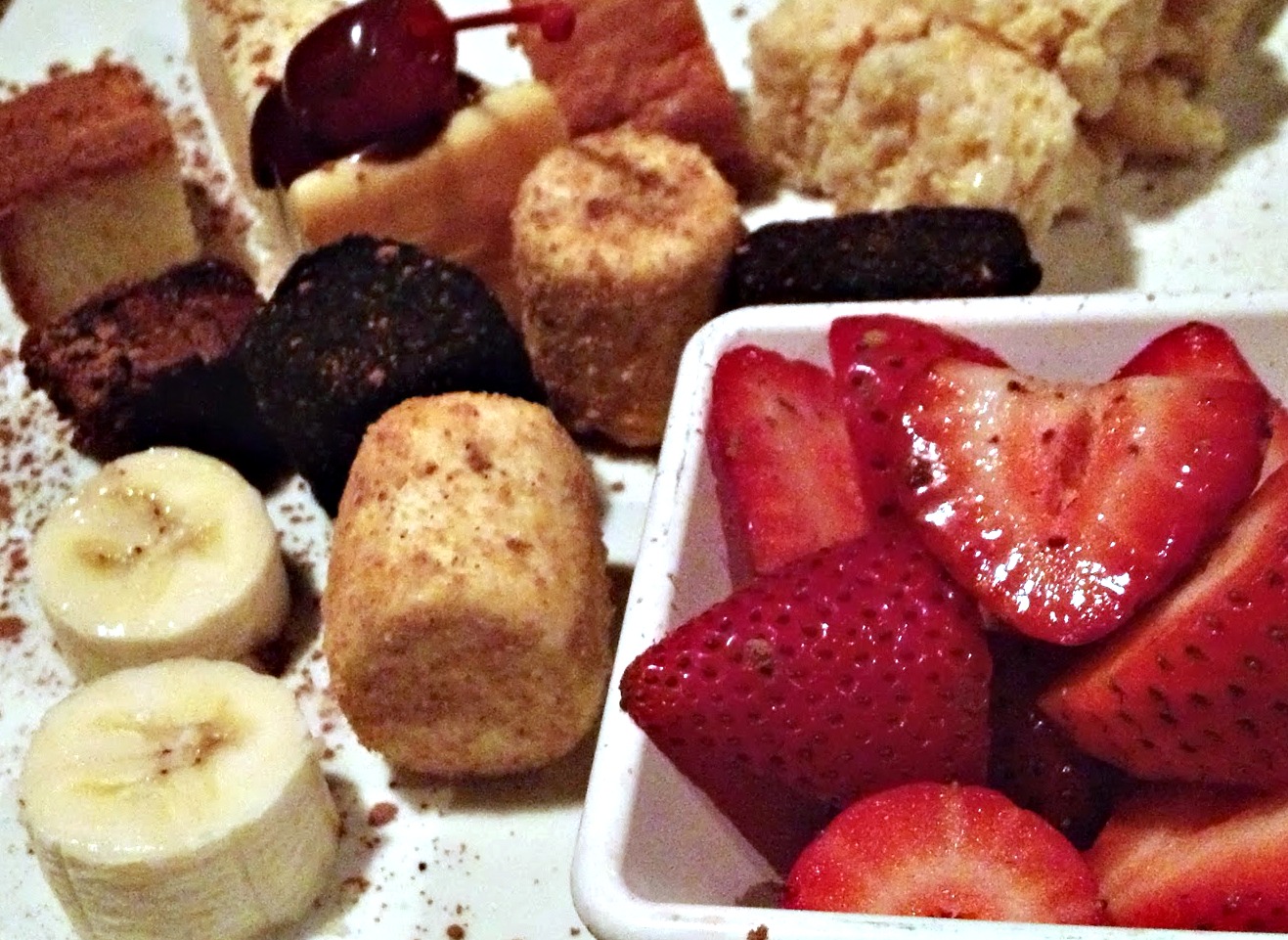 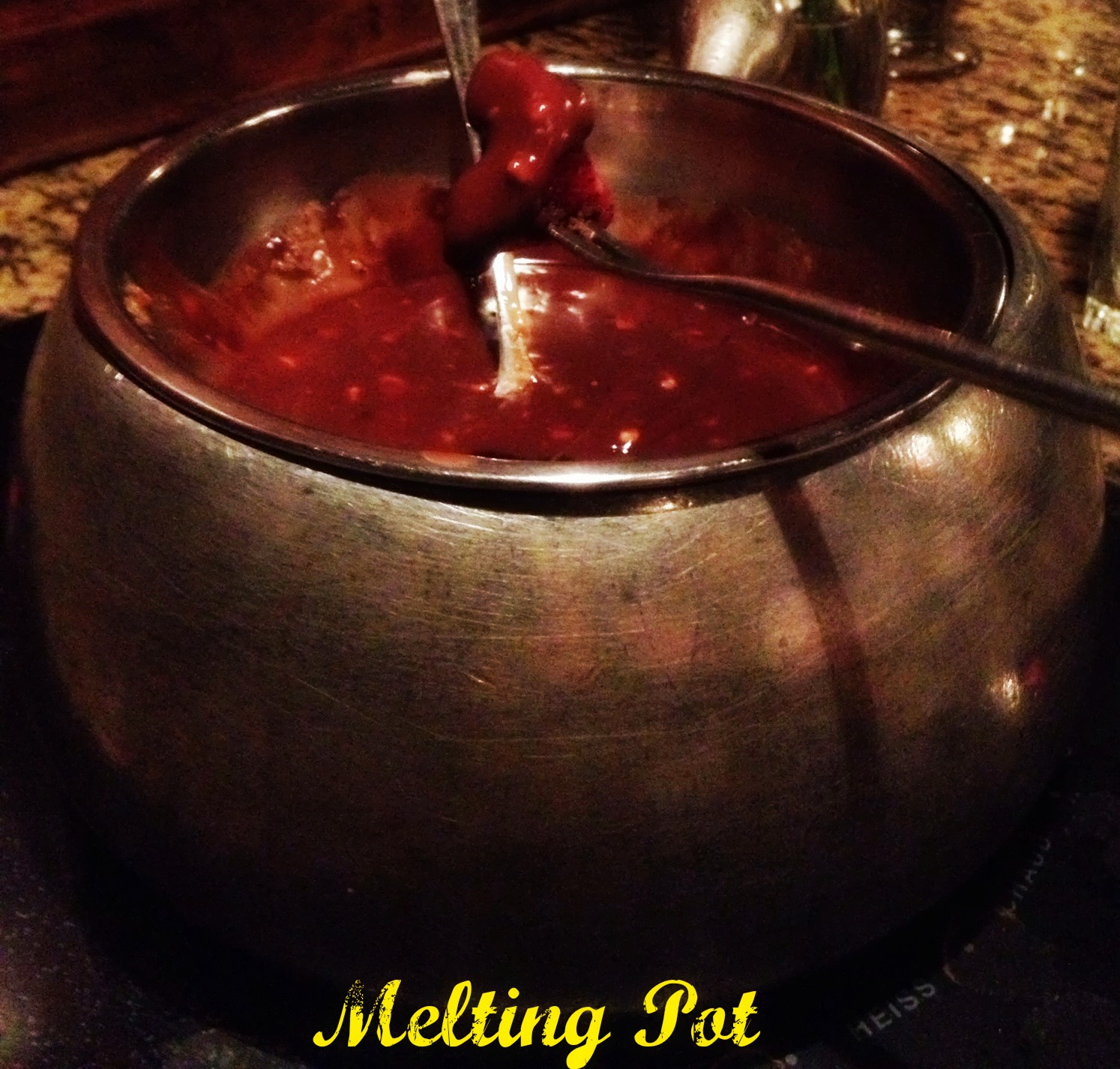 Chocolate with chunky peanut butter all melty and gooey and delicious!
Why Should You Go? The food is really good and it’s an experience. It gives you something to do while you’re eating. You’re cooking and trying new things – it’s fun. I would like to have tried a regular cheese fondue – but marriage is about compromise – right?! The meat – I would suggest if you’re there for the full experience – plus up to the better cuts of meat – it’s worth it. For dessert – just splurge and enjoy!
The other thing is that they now offer the individual courses – you don’t have to get the full four course menu. There was a gaggle of girls next to us that were all there just for dessert ($8-9/person). The entrees range from $15-30/person.
Previous Post: « Cincinnati Road Trip: Whippy Dip and Antiques
Next Post: Five Years Later: Food Hussy & Terry’s Turf Club »