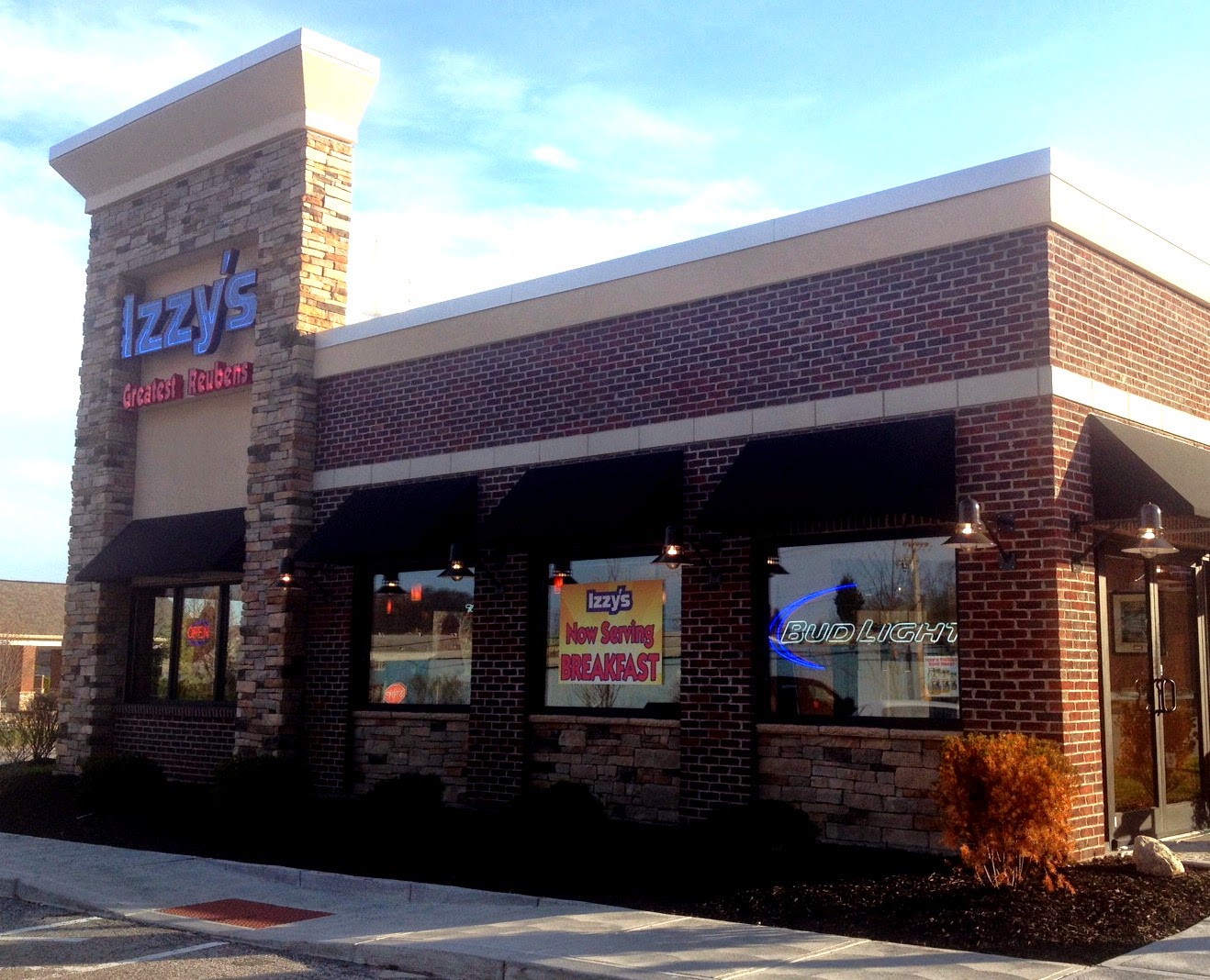 I love when local places branch out and try new things – Izzy’s is now doing beer-pairing dinners at some of their locations! We headed out to the Fort Wright location for their West Sixth Beer Pairing Dinner.
Their next beer dinner is THIS THURSDAY MAY 8 (Ft Wright location) – they are highlighting Sweetwater Brewing Company from Atlanta, GA. For just $25 – you get appetizer, dinner, dessert, one full beer paired with each course and you keep the glass! Make your reservations today by calling 859-331-4999. 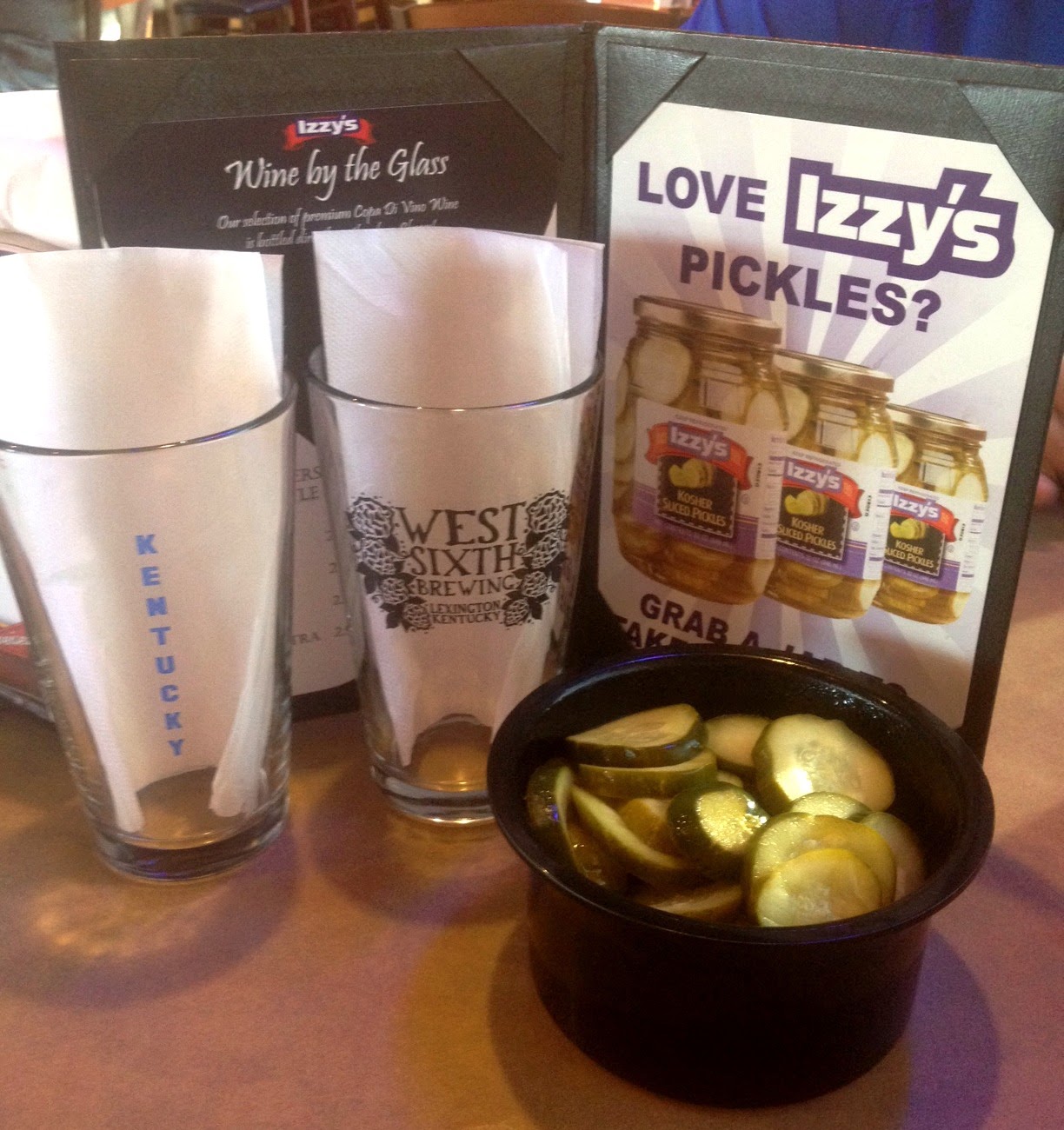 I really like the style of these – there’s not a big presentation – you just sit where you want to sit and the server comes over and brings you two glasses and PICKLES! There are also non-beer pairing patrons at the restaurant – so just mention to the server that you’re here for the beer dinner. 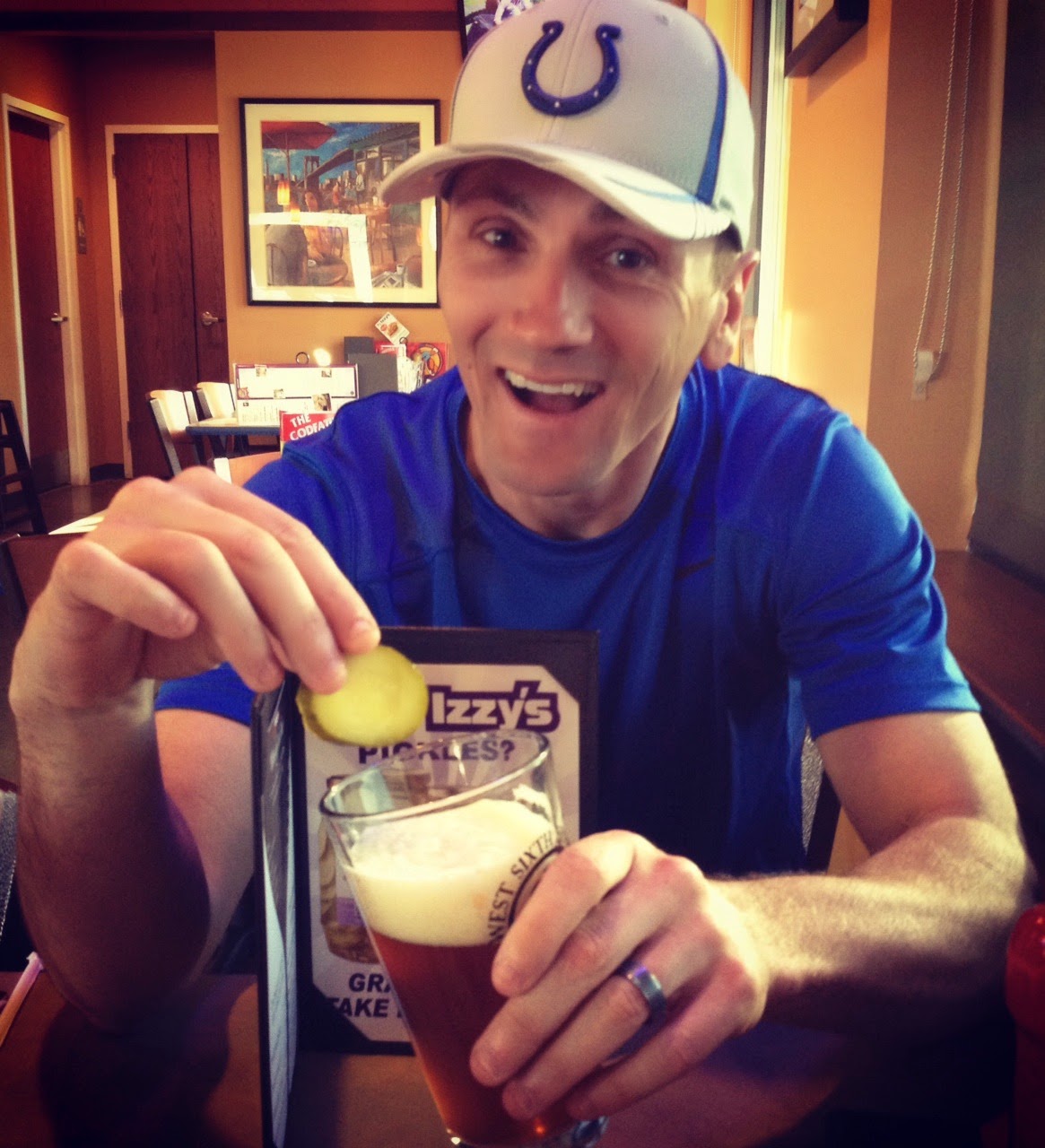 Larry loves the pickles as much as I do and decided to dip them in beer – um – sure why not! 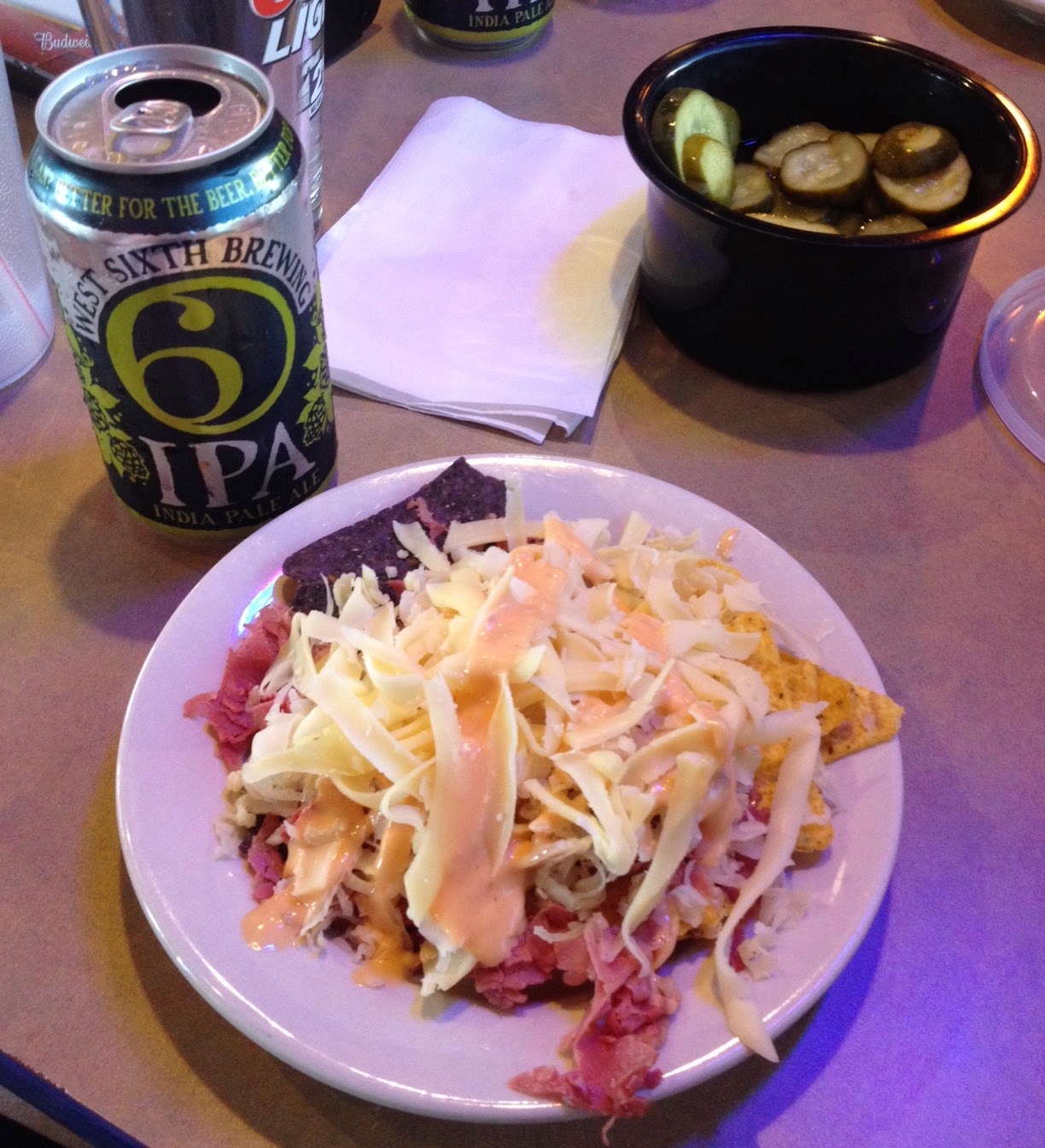 We started out with Rueben Nachos and a West Sixth IPA. The fun thing about the beer pairing dinner is that the fantastic folks at Izzy’s get to branch out from their regular Ruebens and have a little fun. These nachos were pretty good – they were topped with corned beef, thousand island dressing and cheese! You can’t go wrong there. It might have been nice if they’d been a little more melty – but I liked them. And I’m NOT a fan of IPA (my husband LOVES it) – but the bite of the IPA really went well with the mellow cheese. 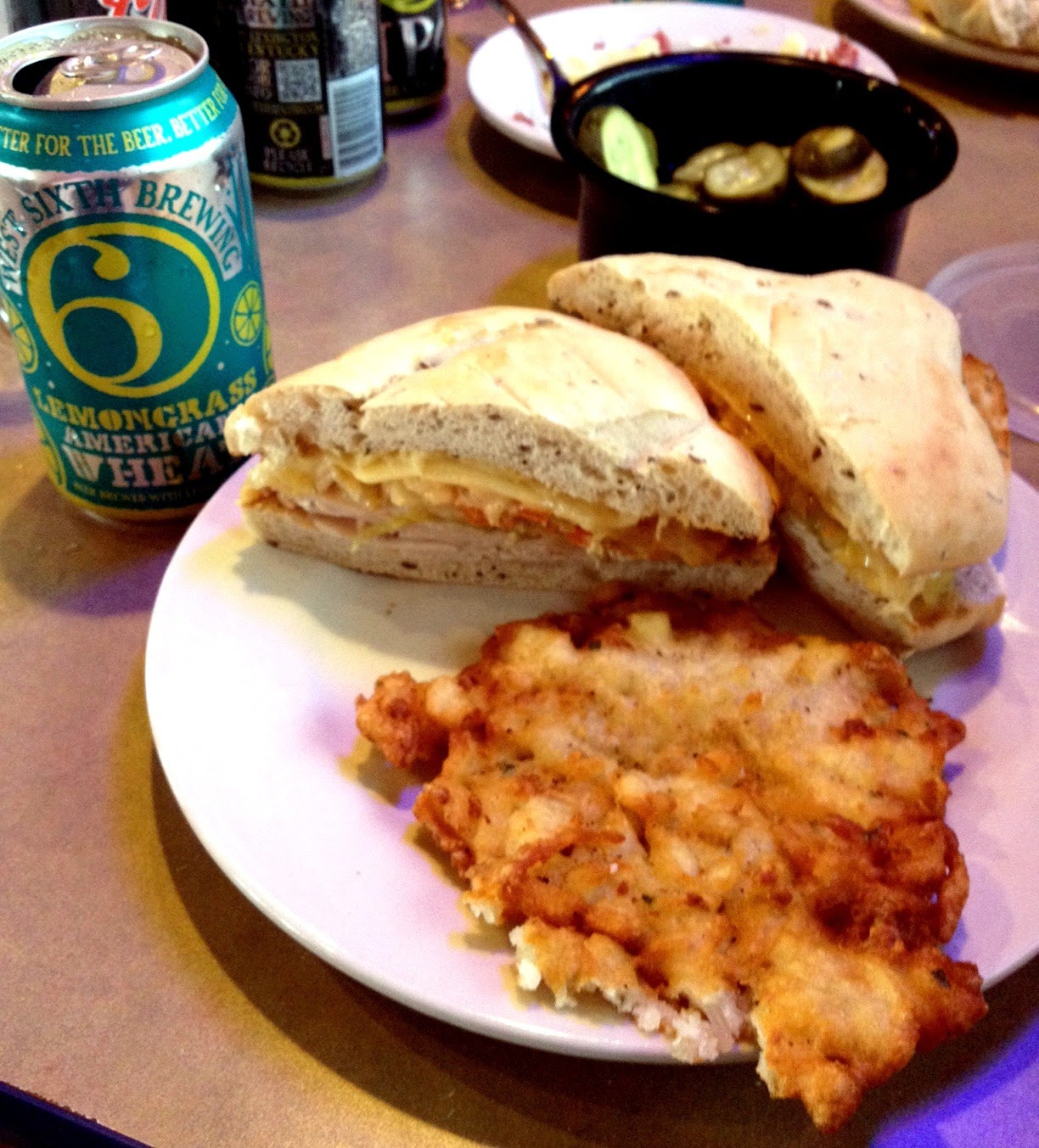 Next up was our entree – a turkey rueben and one of Izzy’s famous potato pancakes paired with the West Sixth Lemongrass American Wheat. I thought this would be my favorite of the beer selections and was right. It was light and refreshing and paired great with the turkey. The turkey rueben is something I would never normally try (the Izzy’s Combo is my regular) so it was fun to try something different. And then they did it – I mean – they REALLY DID IT. They served us DEEP. FRIED. OREOS. What in the sam hell?! They paired it with the West Sixth Amber Ale – and even added some of the ale into the frosting. I have never had fried oreos and honestly – didn’t think I’d like them. Boy was I wrong! They were like floating on a cloud with George Clooney fanning you! I mean you just have no idea how amazing they were. I thought they would be too rich but the chocolate and icing just melted inside so it was like a giant fluffy donut cookie. This isn’t on the regular menu – so you just have to cross your fingers that it’s what they pick for dessert again. Oh my my! John (manager) did tell me the trick to these is using frozen cookies.

Why Should You Go? I still can’t believe the deal – 3 full beers, 3 courses and a souvenir – for just $25! You gotta call and make reservations today by calling 859-331-4999! The next one is coming up THIS THURSDAY! It was really fun too – John is a great manager and the staff is very accommodating.

Disclosure: Izzy’s provided this dinner to me in exchange for a blog post but all opinions are my own. 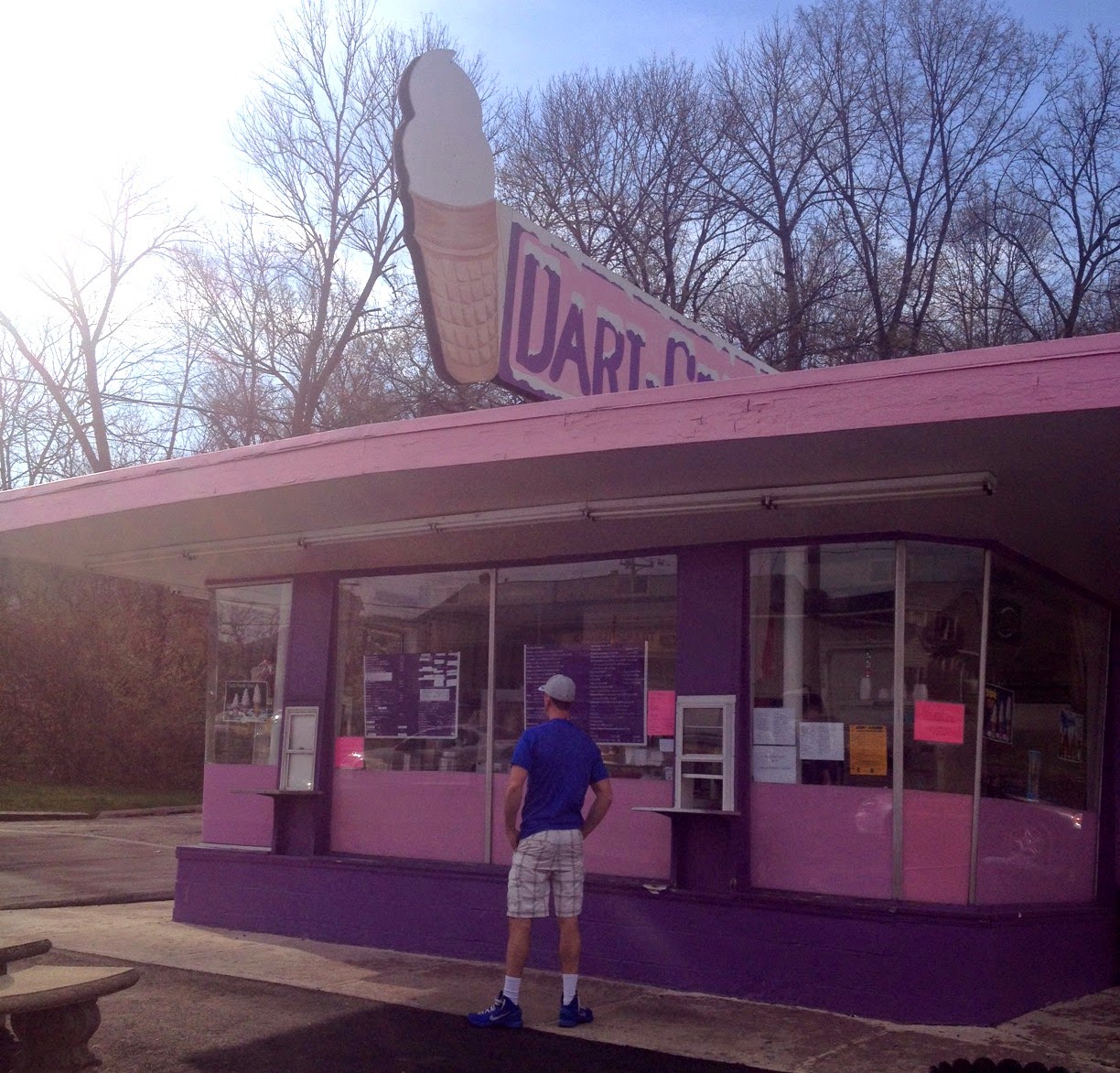 Before dinner – Larry wanted some ice cream – and up the road we came across this Dari-Crest. 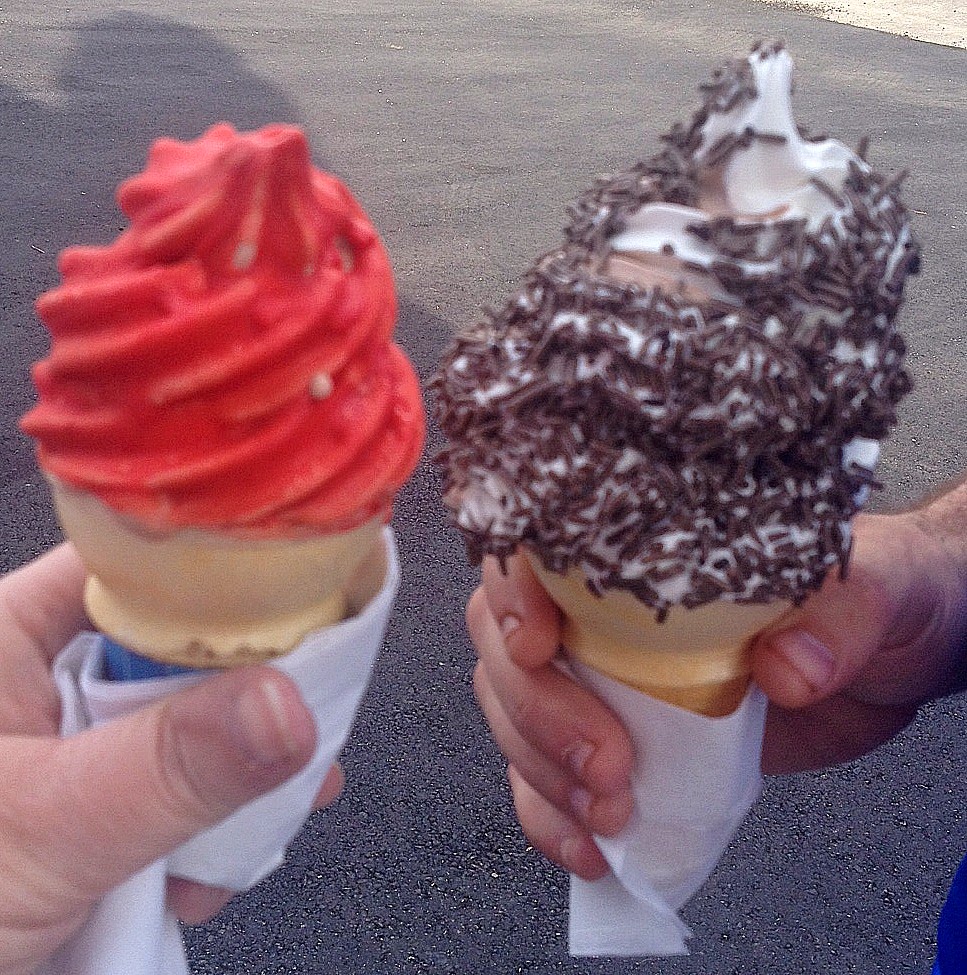 We each got a cone – Larry is a sprinkle fan while I like the chocolate dipped in cherry. Good stuff here! The ice cream was really creamy too – good stuff!