How
goes it fellow foodies!  My name is adam
and I am going to be helping out Food Hussy with some reviews!  I LOVE going to new restaurants, bars, and
the amazing events that take place across this area.

I
am 27 years old and have lived here all my life.  I am so excited to share with you the
different places and experiences Cincy has to offer.  And since I am always on a budget, like many
of you are, I will also be sharing with you tips & special deals that even
the most expensive restaurants offer.

So
let’s get things started with JeanRobert’s Table.  For those who don’t
know, Jean-Robert de Cavel is one of Cincinnati’s most famous chefs, with his
crown jewel being the chef at the legendary 5 star Maisonette.  Jean Robert has opened a few restaurants and
Table has just recently celebrated its third year anniversary.  It is located at 713 Vine St in downtown
Cincy.

Table
is not ridiculously expensive but most dinner meals run $20-30 for an entrée
and when you add in drinks, appetizer, dessert then your bill can easily run
near $100.  But there is a hidden special
that allows you to try this French cuisine for a small price.  It’s called the Lunch Tray. 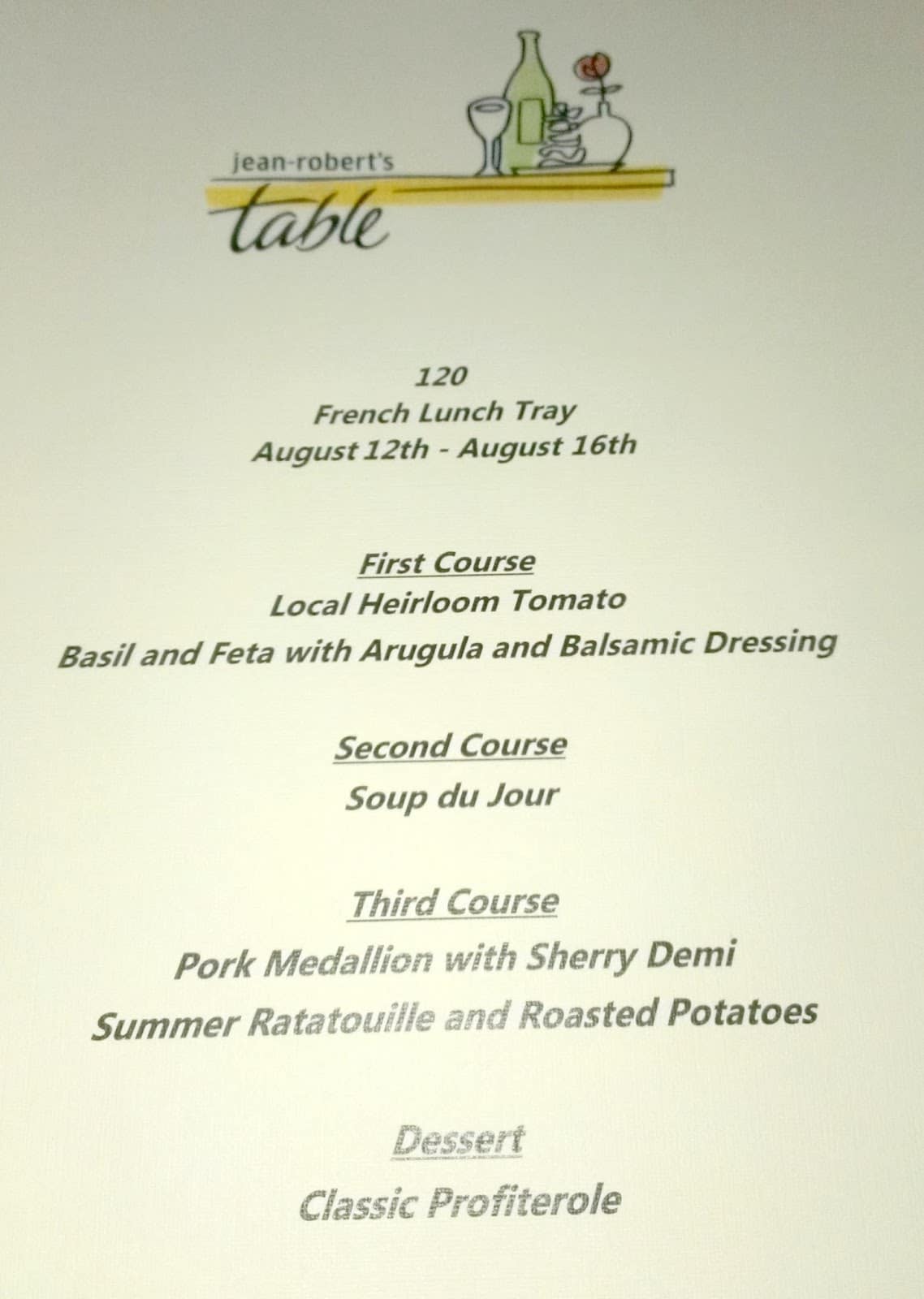 The
Lunch Tray is served Monday thru Friday in the beautiful bar area from 11:30am
to 2pm.  No reservations required.  The price is $14 for a four-course meal that
is served all at once.  It uses local
produce and the menu changes each week.  The
menu is posted on their facebook page and website. 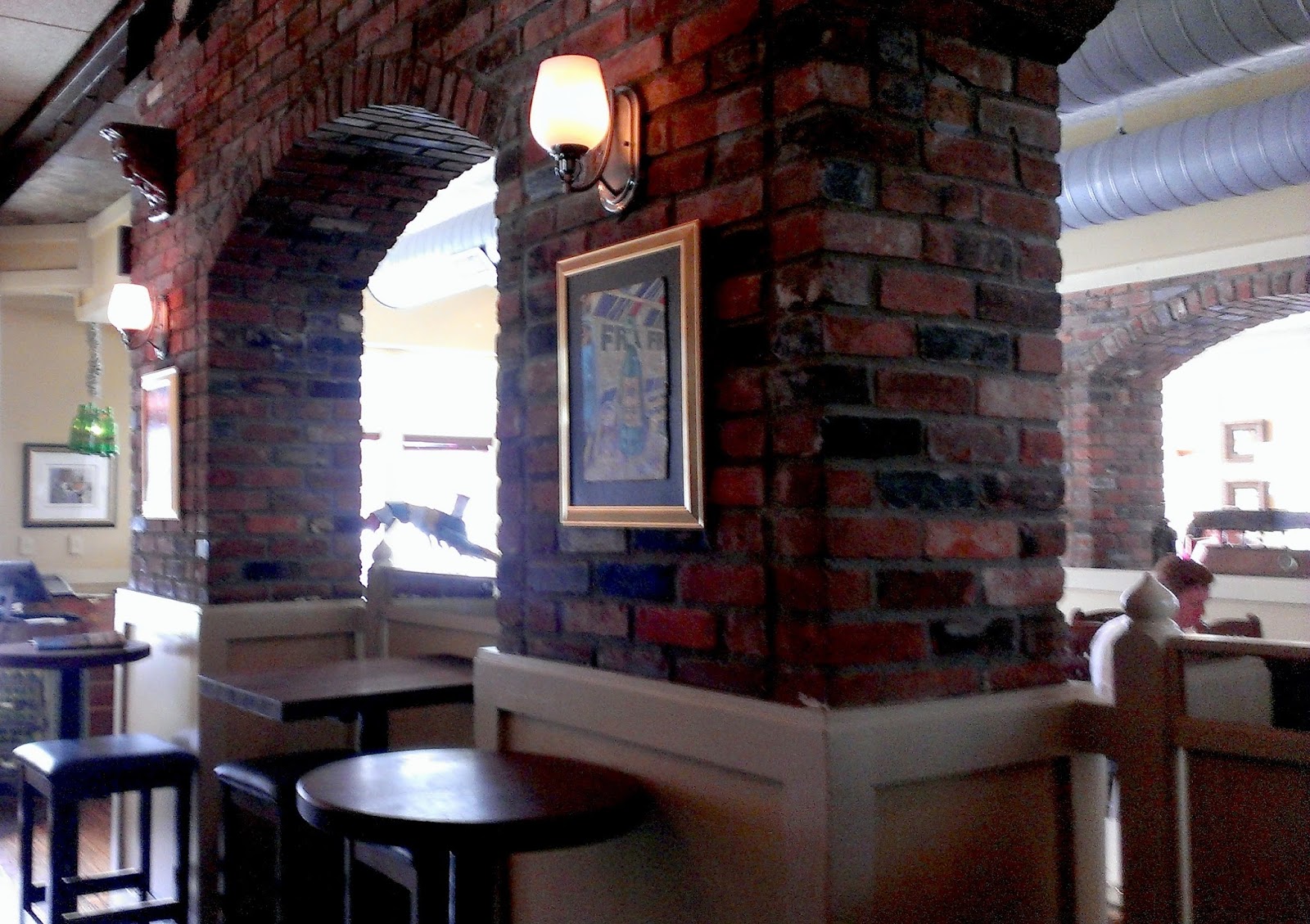 I
went on a Monday after shopping downtown and arrived around 11:30am.  I was the only one there but that’s not
surprising considering they just opened their doors.  The restaurant is very pretty inside, with
many dark brown walls and exposed brick combined with large windows.  The staff was very welcoming and the bartender
wasted no time in explaining to me the regular menu as well as the lunchtime
tray.  I ordered a cocktail (hey it was
my day off!) and watched some ESPN as my tray was prepared. 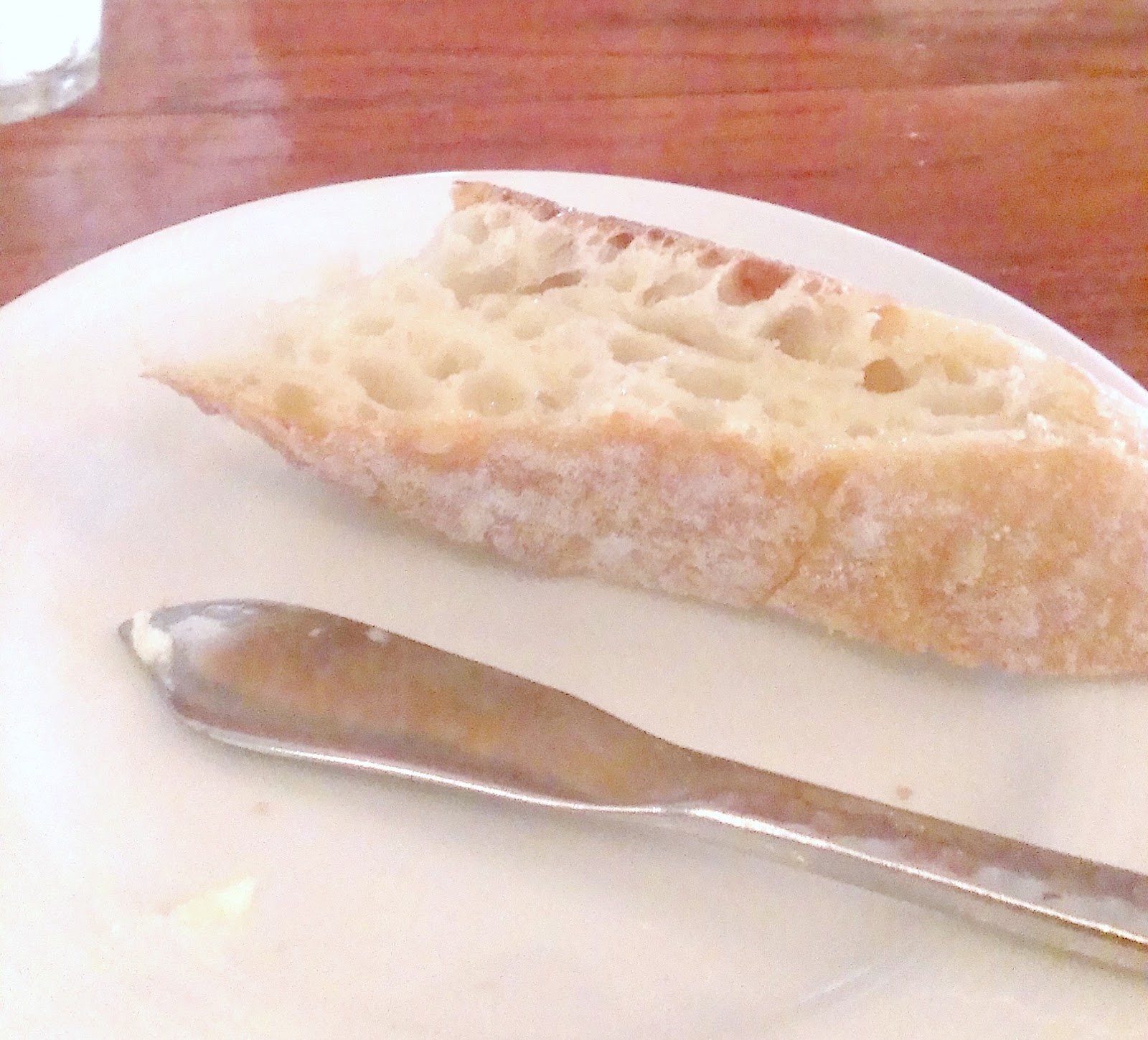 As
you wait they bring you bread like many restaurants do.  However, this bread was fresh, French bread
straight out of the oven.  It was sliced
at an angle and was absolutely delicious, soft and chewy with a slightly crisp
crust. 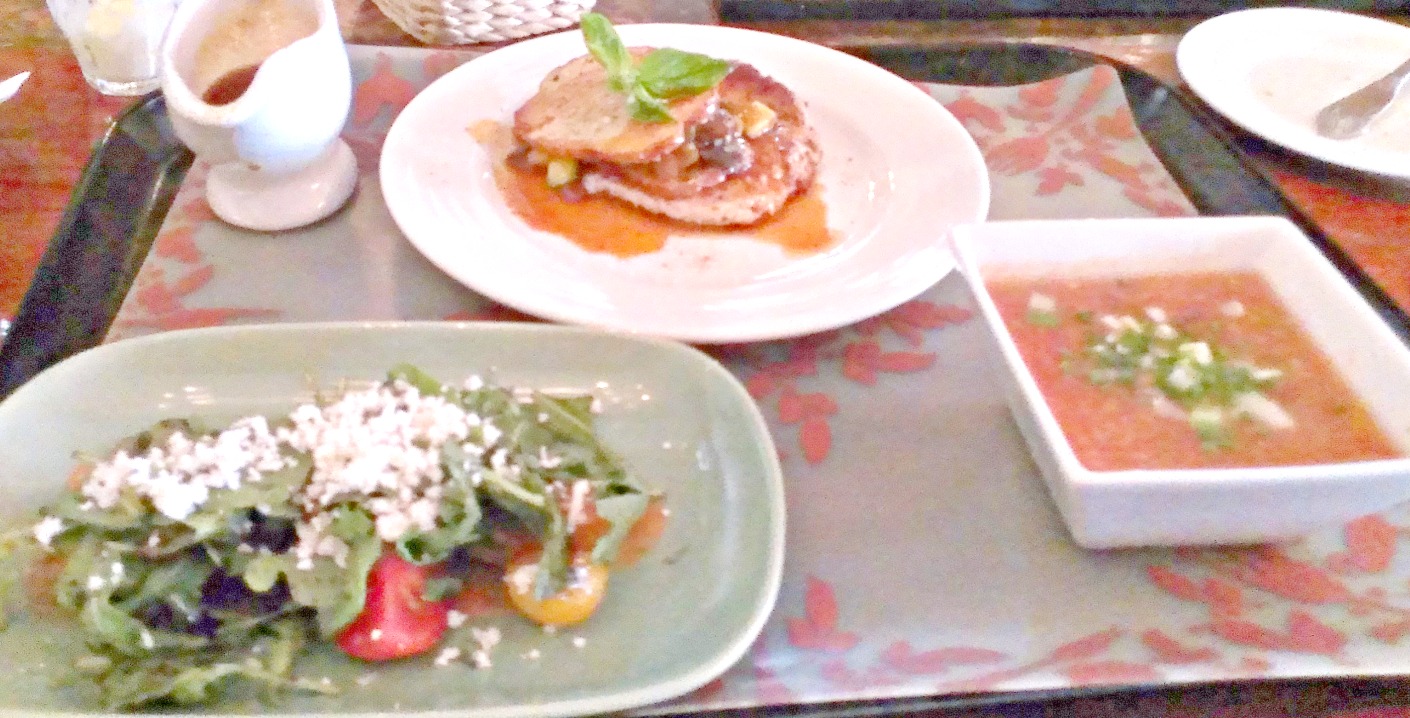 Now
with the lunch tray they do serve the first three courses together so be warned
if you take your time eating, you may find your food slightly cold.  Luckily, I don’t eat slowly!  The first course was a salad of heirloom
tomatoes, arugula & basil, topped with feta cheese and balsamic dressing
drizzle.  The tomatoes were super fresh
& full of flavor.  The feta cheese
added just the right amount of creaminess and tang that paired well with the
spice of the arugula.

Next
was the soup du jour which was a gazpacho soup made mainly with watermelons and
tomatoes and had onions and jalapeños added to spice it up.  To be honest the soup was just alright.  When I was told and saw how much onion &
jalapeño I expected this huge burst of flavor and spice.  Now I am a huge fan of big, bold spices and
maybe I was expecting too much but the flavor of this soup was just too
muted.  All I tasted was watermelon and
that was it.  After a few spoonfuls I was
done. 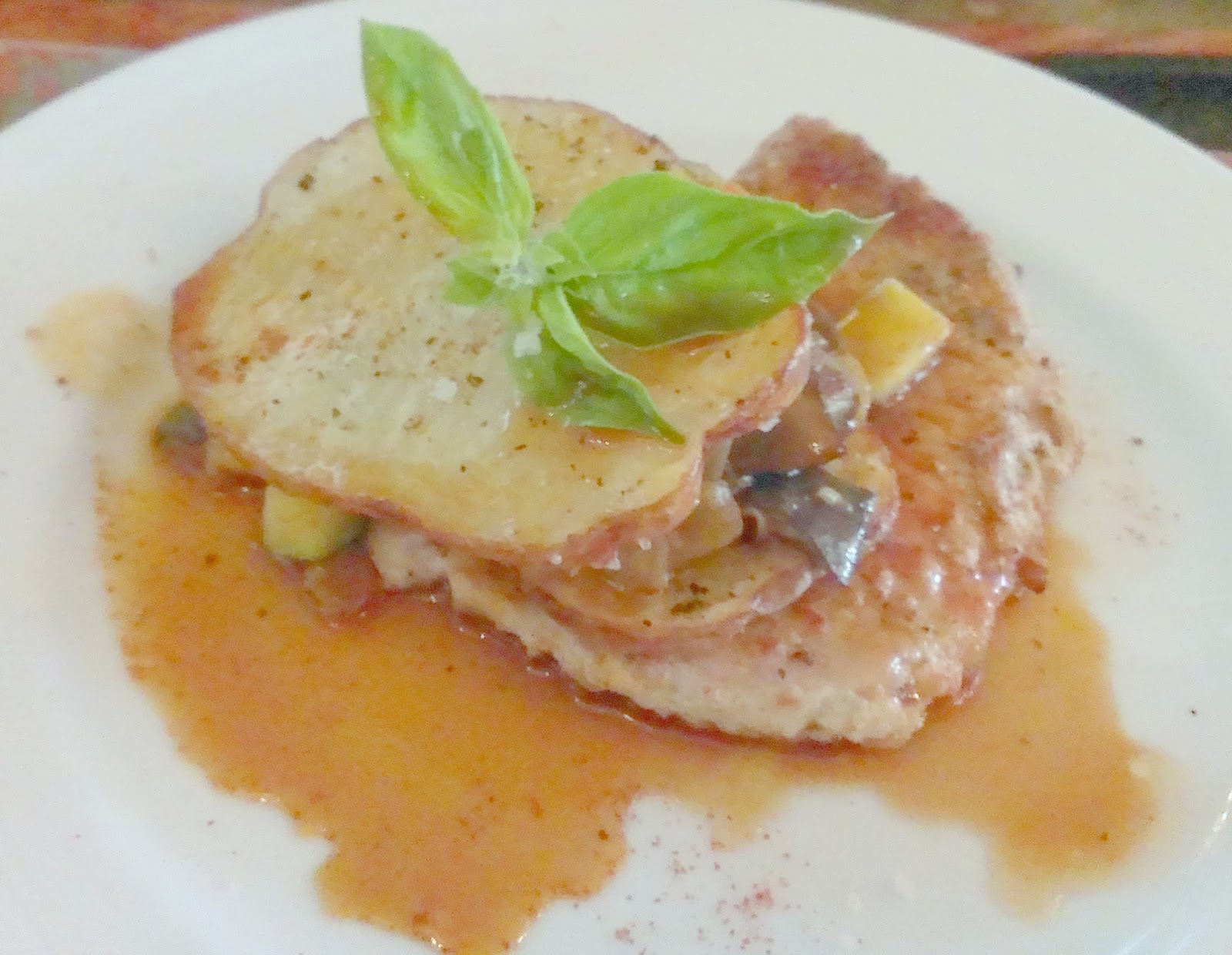 The
third course was a pork medallion with a sherry demi sauce with summer
ratatouille and roasted potatoes.  This
was by far my favorite part of the meal.
The pork was perfectly cooked and spiced perfectly.  The roasted vegetables were soft and when
combined with the potato added a nice starch contrast to the pork.  What made this dish though was the sherry
sauce.  It added depth to the dish and brought
out the flavor in the pork.  I literally
could have licked this plate clean and almost did considering how strong my
vodka and cranberry was! 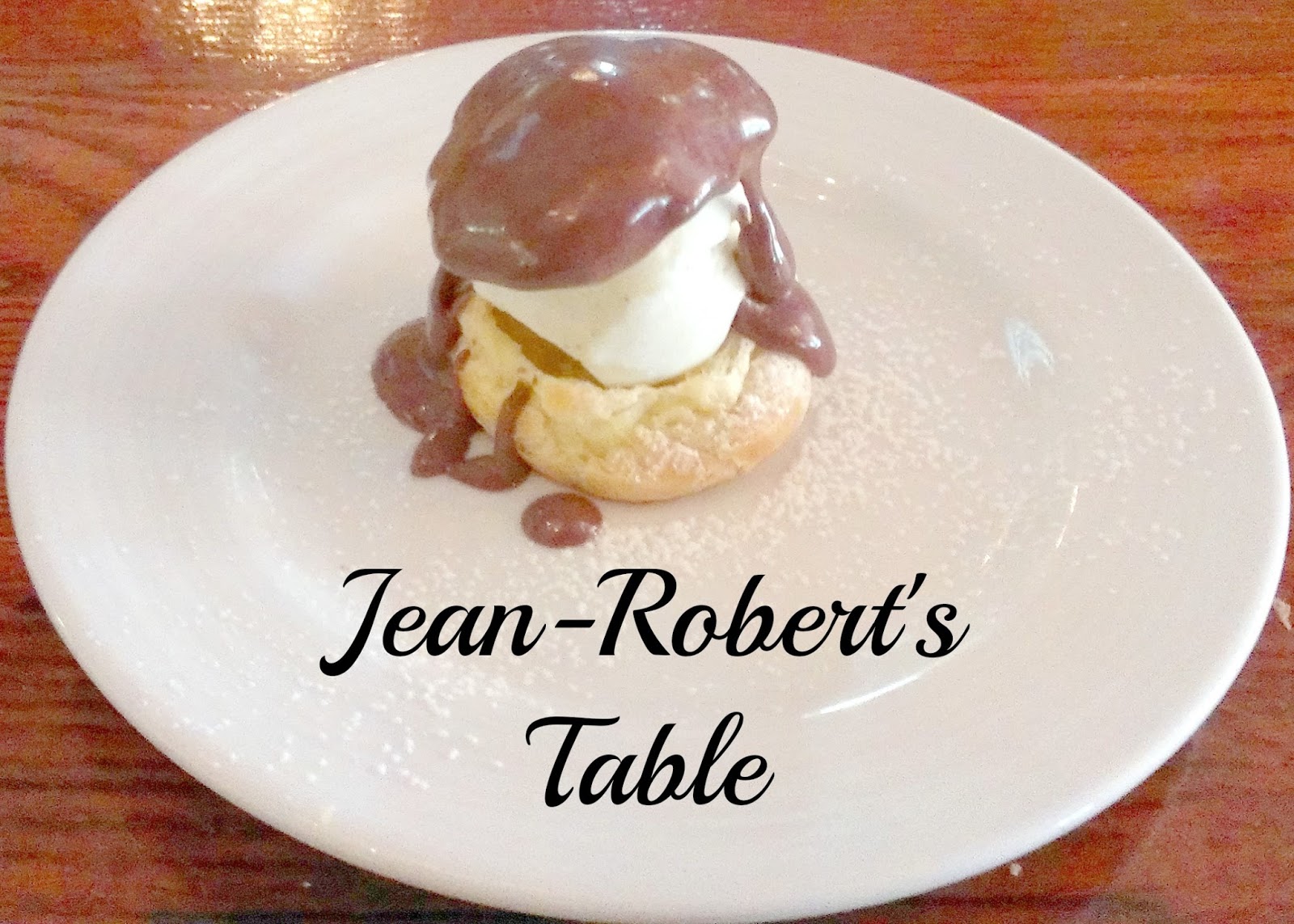 Last
but not least was the fourth course, dessert!
It was a French pastry filled with a vanilla cream and coated in a dark
chocolate ganache.  The pastry was just
the right size.  Big enough to qualify as
a real dessert but small enough & light enough that it didn’t over fill you
the way many lunches do.  The dark
chocolate paired perfectly with the vanilla cream and I finished the dessert in
no time! 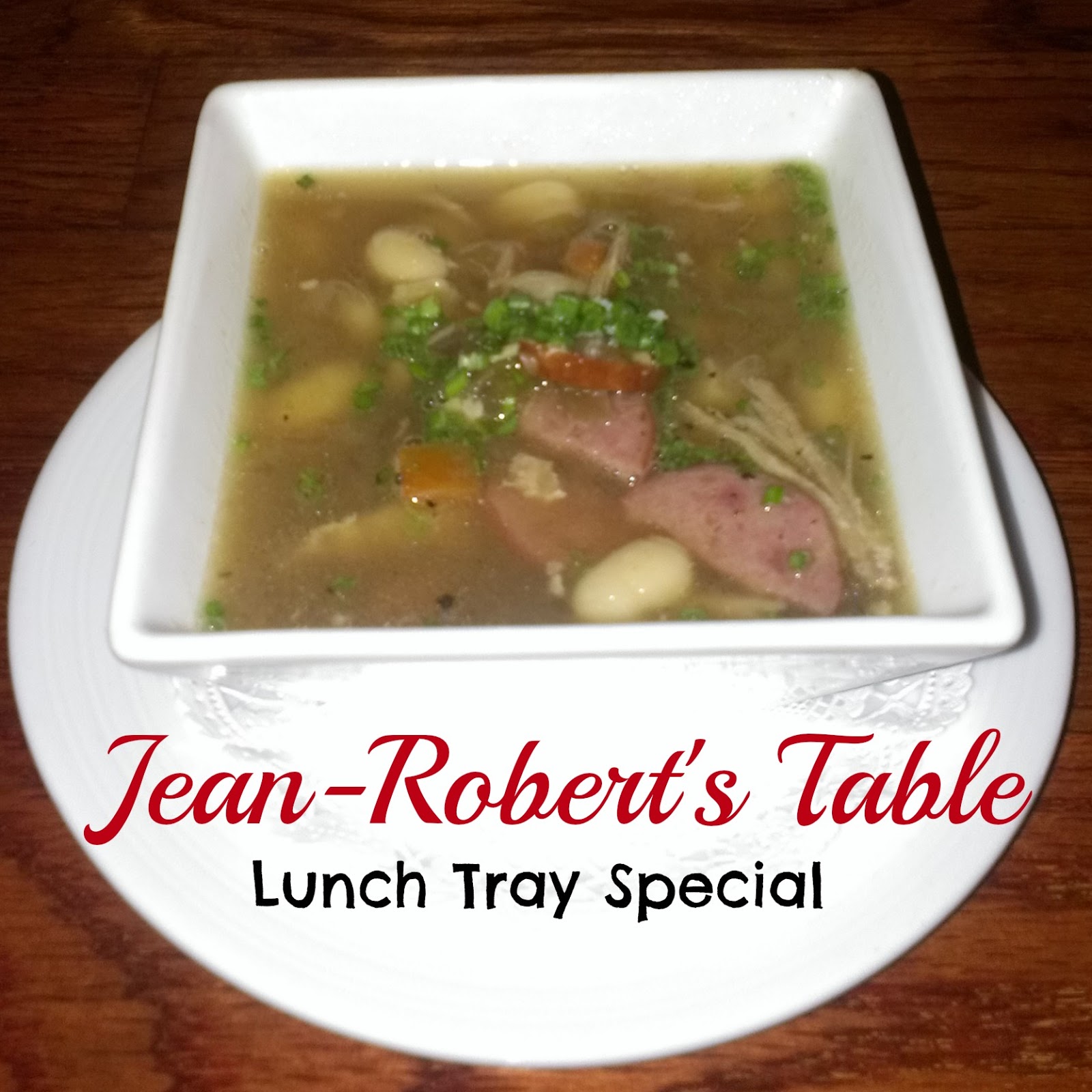 Now
when the bartender saw how little I ate of my soup – she was so nice.  She apologized for the soup not having enough
kick and brought me out a cup of the country stew they were making.  Now with the lunch tray substitutions are not
allowed so I was very surprised and taken aback by this kind gesture.  The stew had vegetables, andouille sausage
and duck confit with beans.  This soup
was astounding!  The meat was tender and
the soup was spiced to perfection.

The
four-course lunch tray was a great meal to try!
At only $14 this is a steal for how much food you get and for how fresh
it is.  The best part?  The menu changes every week!  So each week you can get a whole new meal
tailored for that week based on the season and produce available.