My hubby works weekends (which sucks) so I have to take advantage of the time I get with him to eat out at unique places. So when he came home one random night – I proposed three new restaurants for dinner – Remezo Greek, Mimi’s Cafe and Circle K Kennings – he chose… 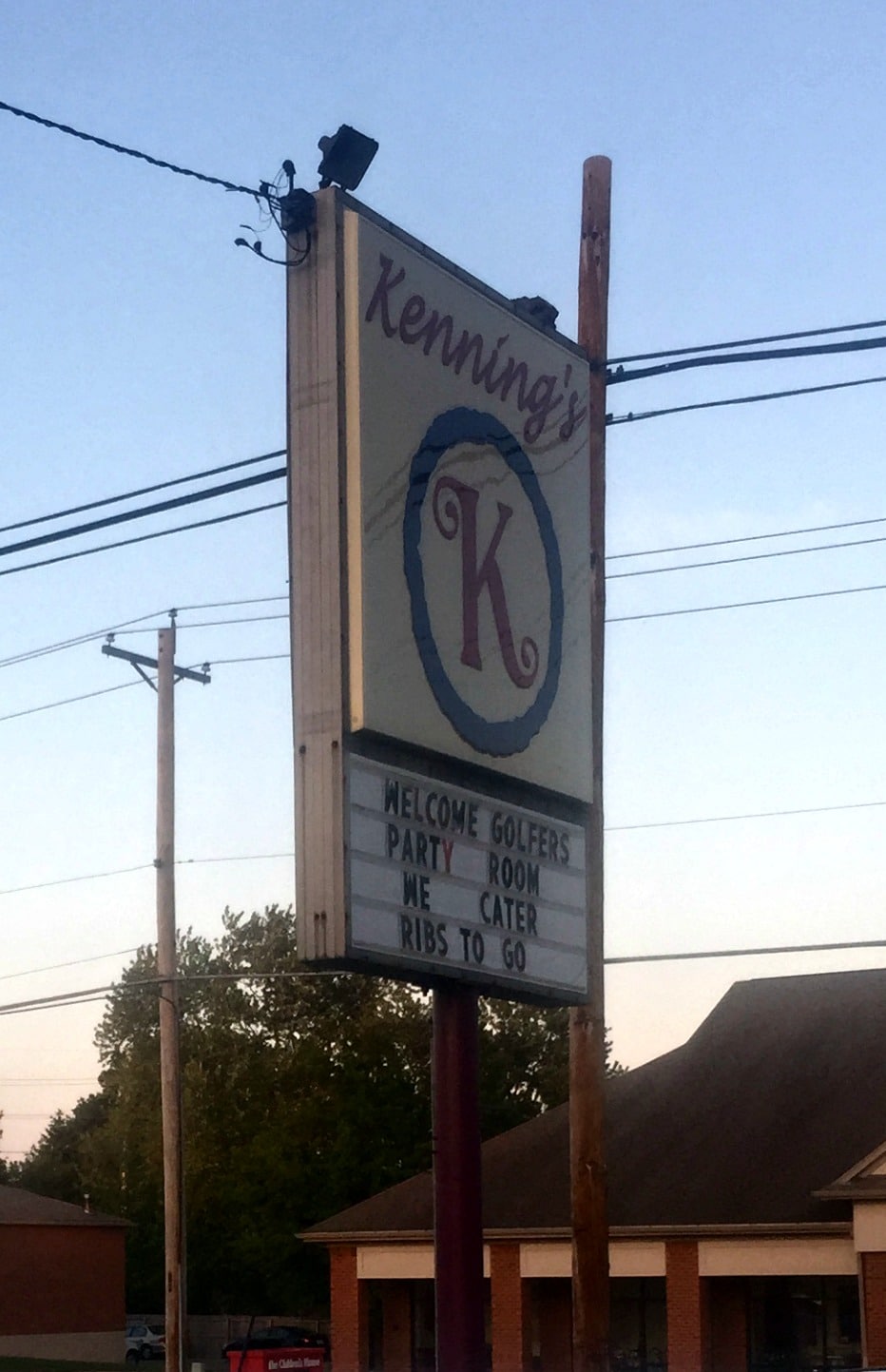 It’s a West Side Staple and has been there forever. It has a definite feel like Pine Club or Maury’s Tiny Cove – small building, no windows, no redecorating since the grand opening. It’s also 30 seconds from a Walgreens – but more on that later. 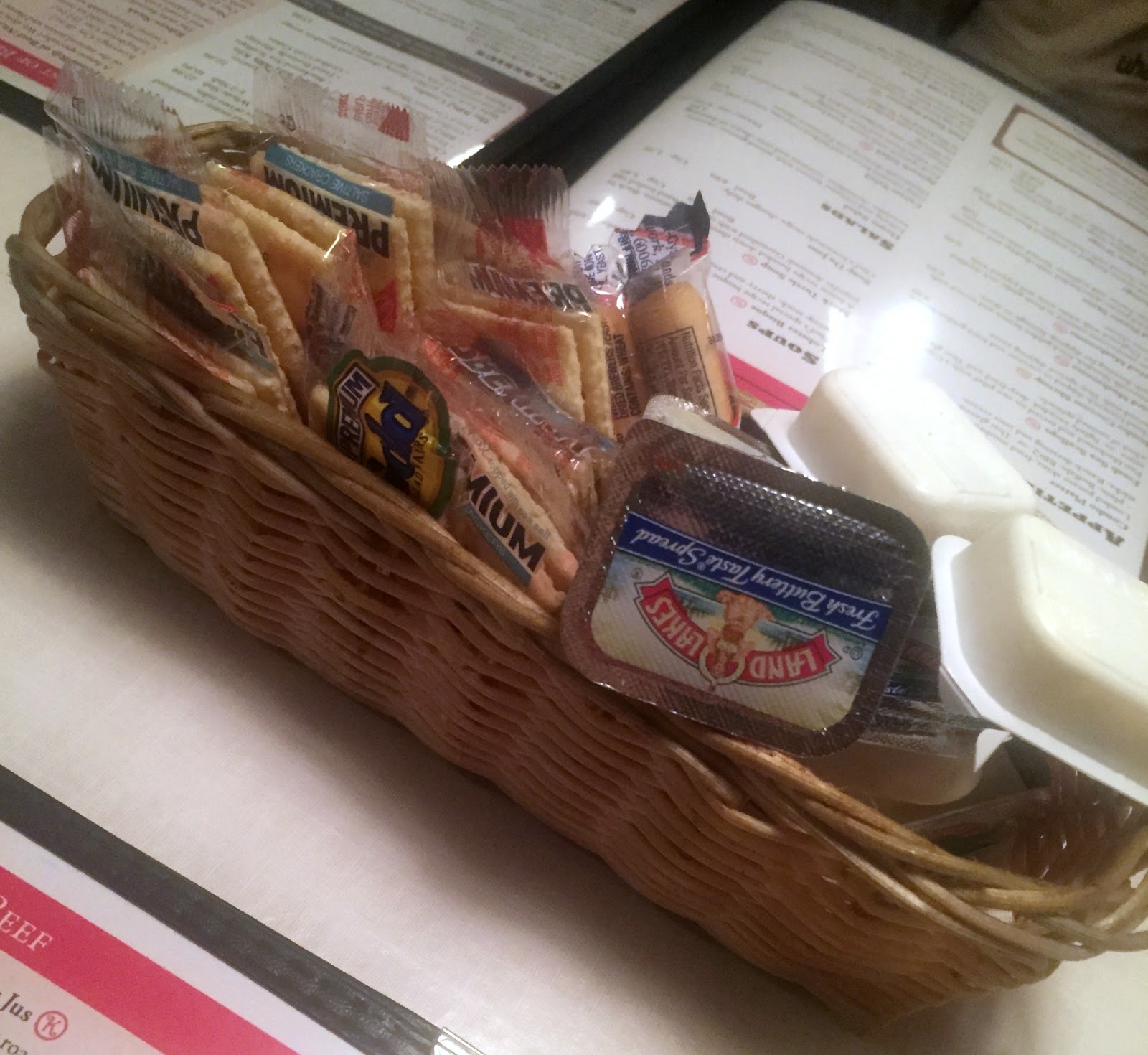 Larry was happy to find crackers on the table – I’m not sure why this brings joy to a grown man – but it does. I’ll take it where I can get it. 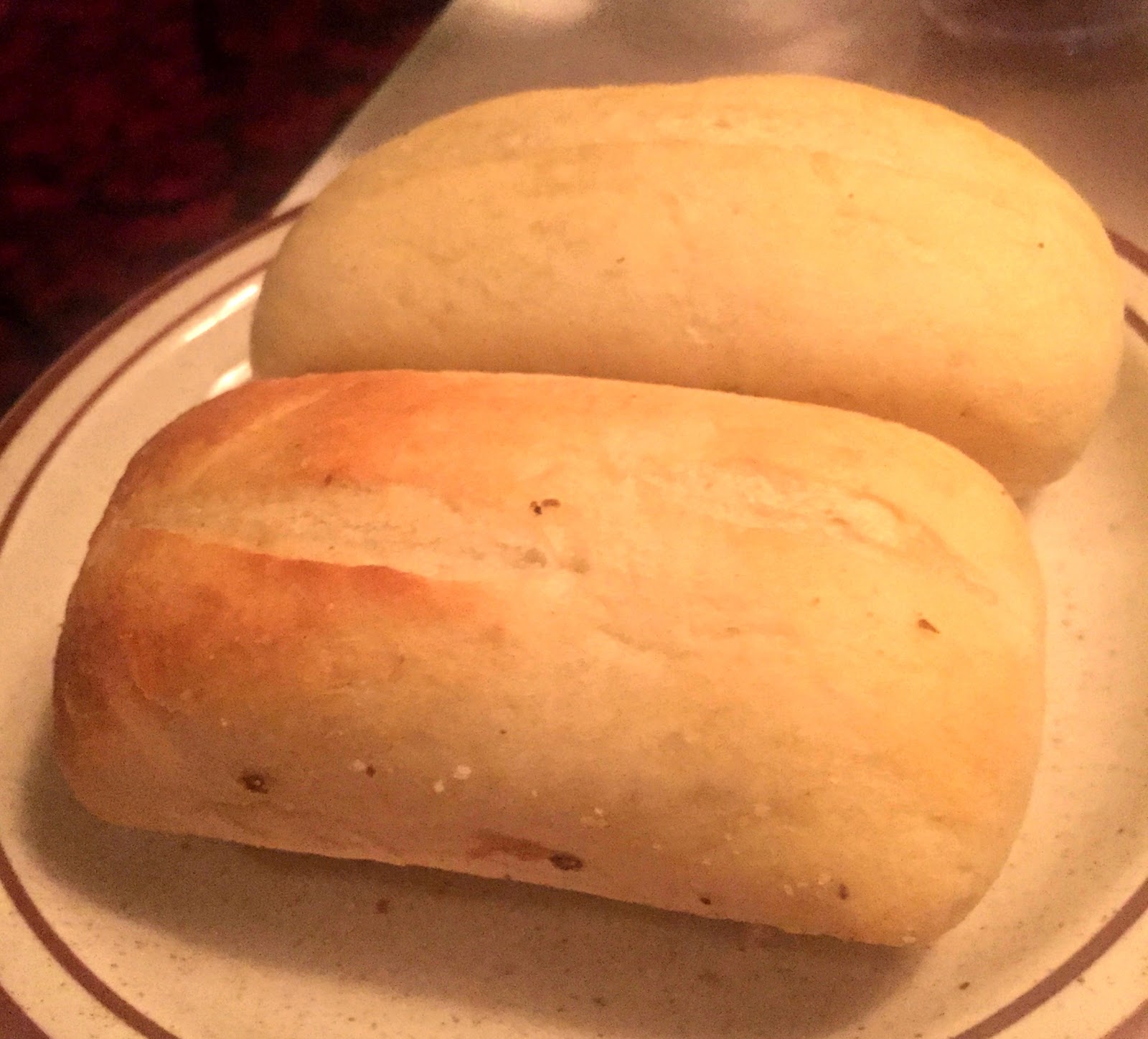 We must have had signs on our back saying that we were up for carb-loading – because after the crackers came fresh baked bread. The rolls were tasty for sure but it’s hard for rolls right out of the oven to not be good. 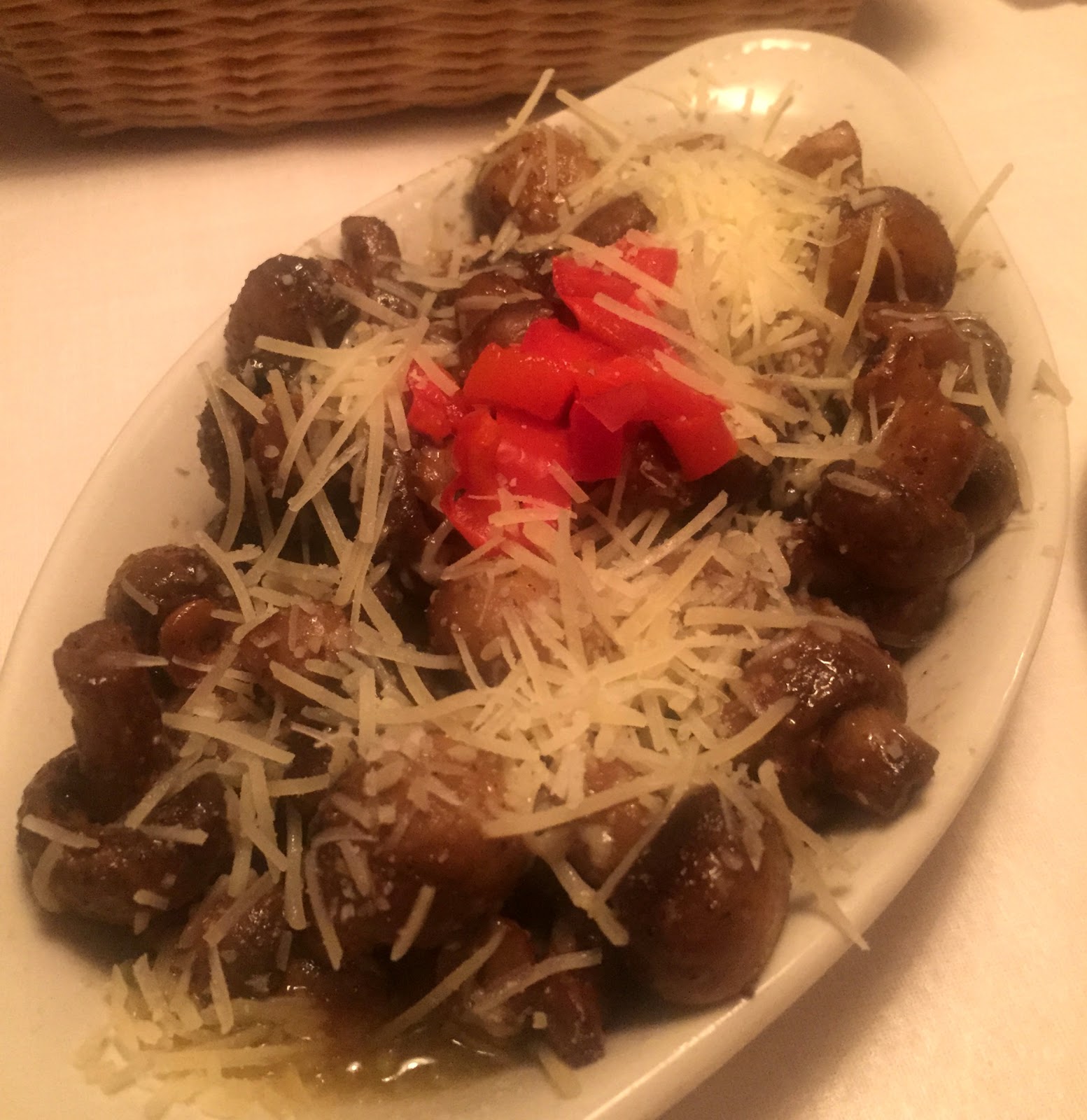 Larry shocked me pretty severely by —- ordering MUSHROOMS! Yeah – who saw that coming! The sauteed mushrooms ($6.99) were deglazed with white wine and topped with parmesan. The mushrooms were tasty – very old school – but good. Larry literally gobbled them up – it was very strange – he’s just not a mushroom guy. 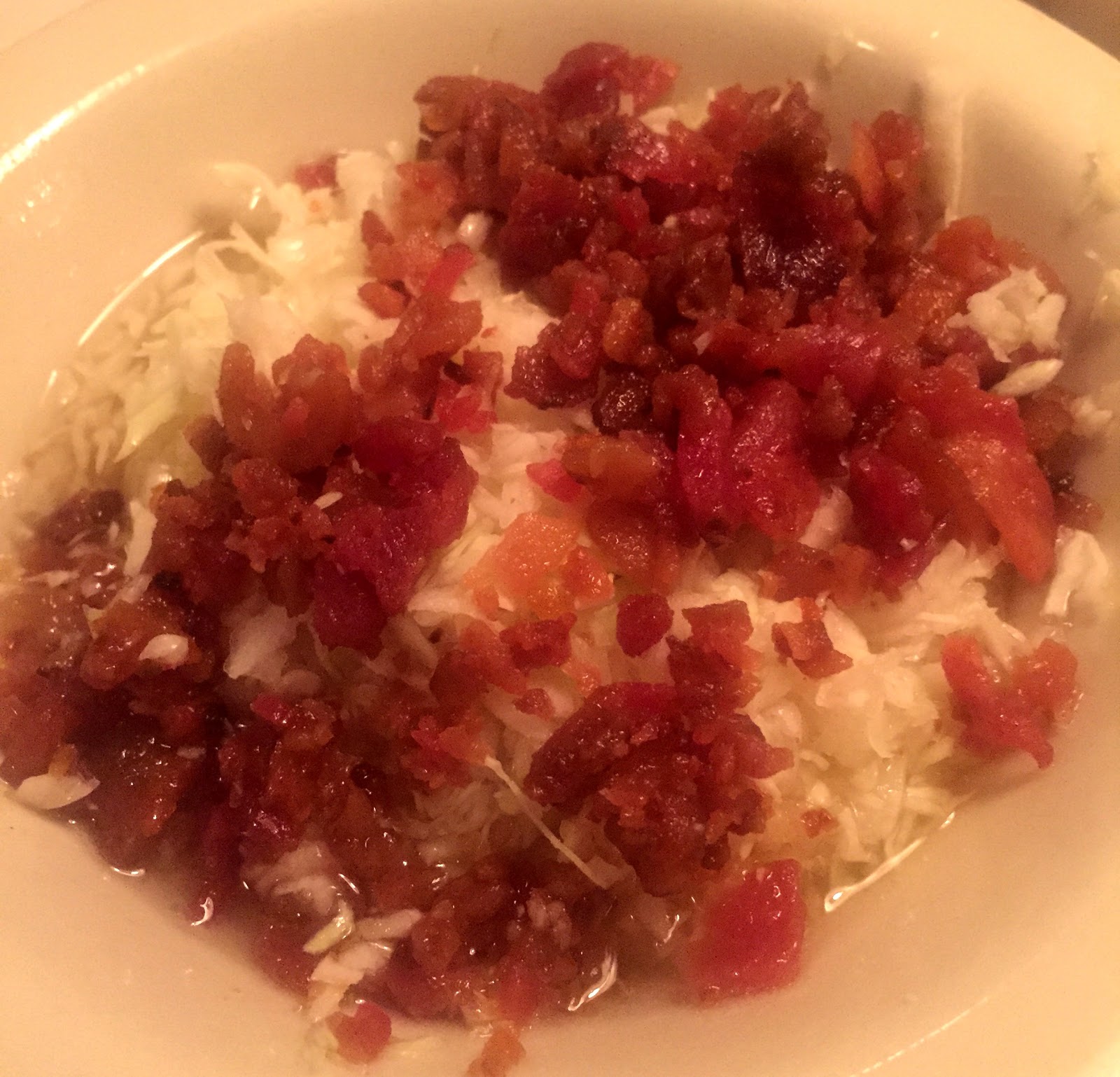 I went for the hot slaw with my dinner. Why? Because it’s what you do when on the west side. I didn’t choose it – it chose me – and I’m glad. This was good as hot slaw goes. It’s basically hot cabbage in vinegar covered with bacon – lots of bacon. There’s also some sugar in there because it’s got sweet & sour. Larry hates when I ask him to try things but I know he likes cabbage so he reluctantly tried a bite and agreed – it was good. 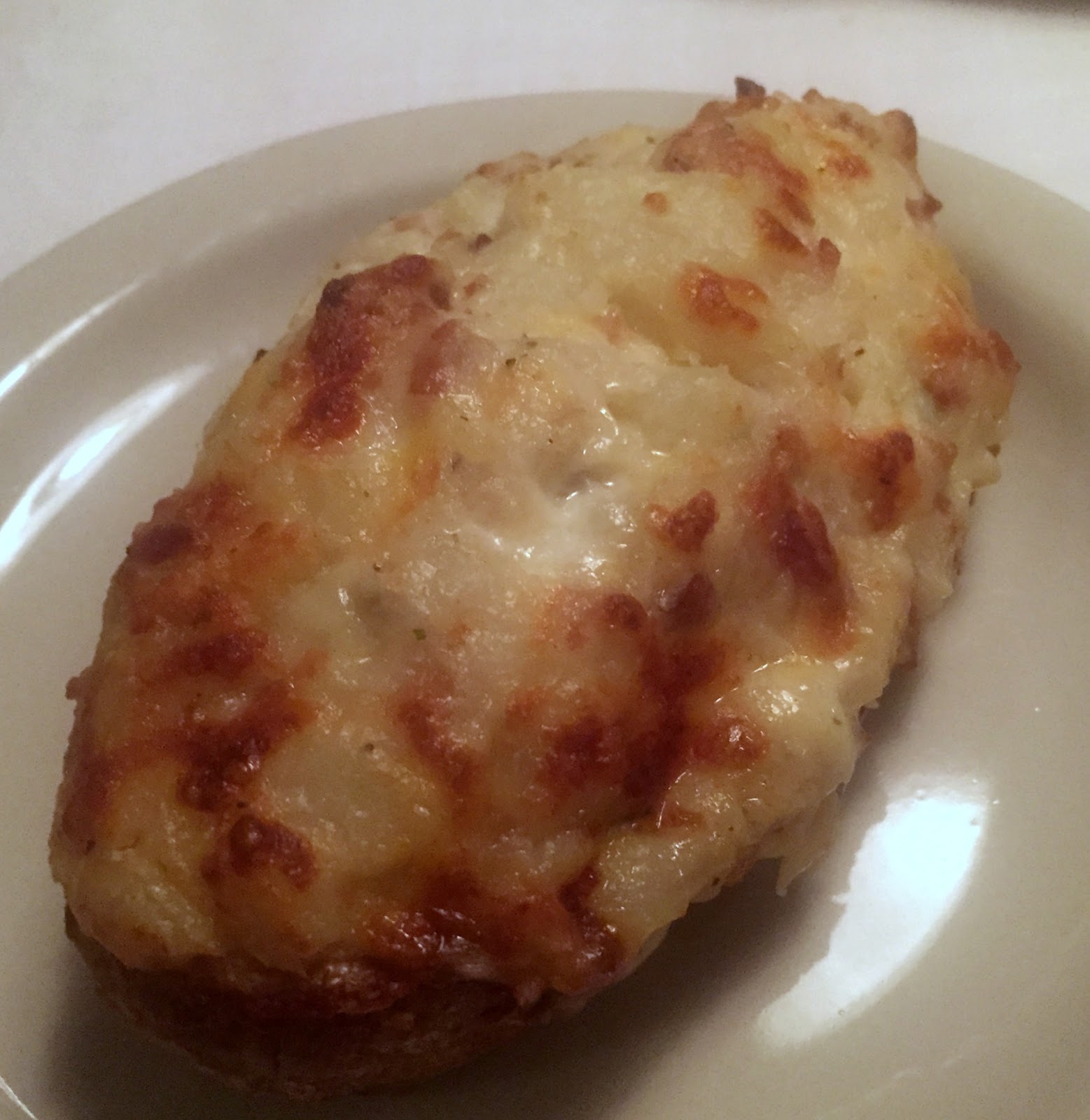 The steaks come with one or two sides – for my other side I chose a twice baked potato and ooooooooh it was good! It was not just a potato that was emptied out and put back in a shell – they mixed sour cream and cheese and goodness in and then put it back in the shell. Good stuff. 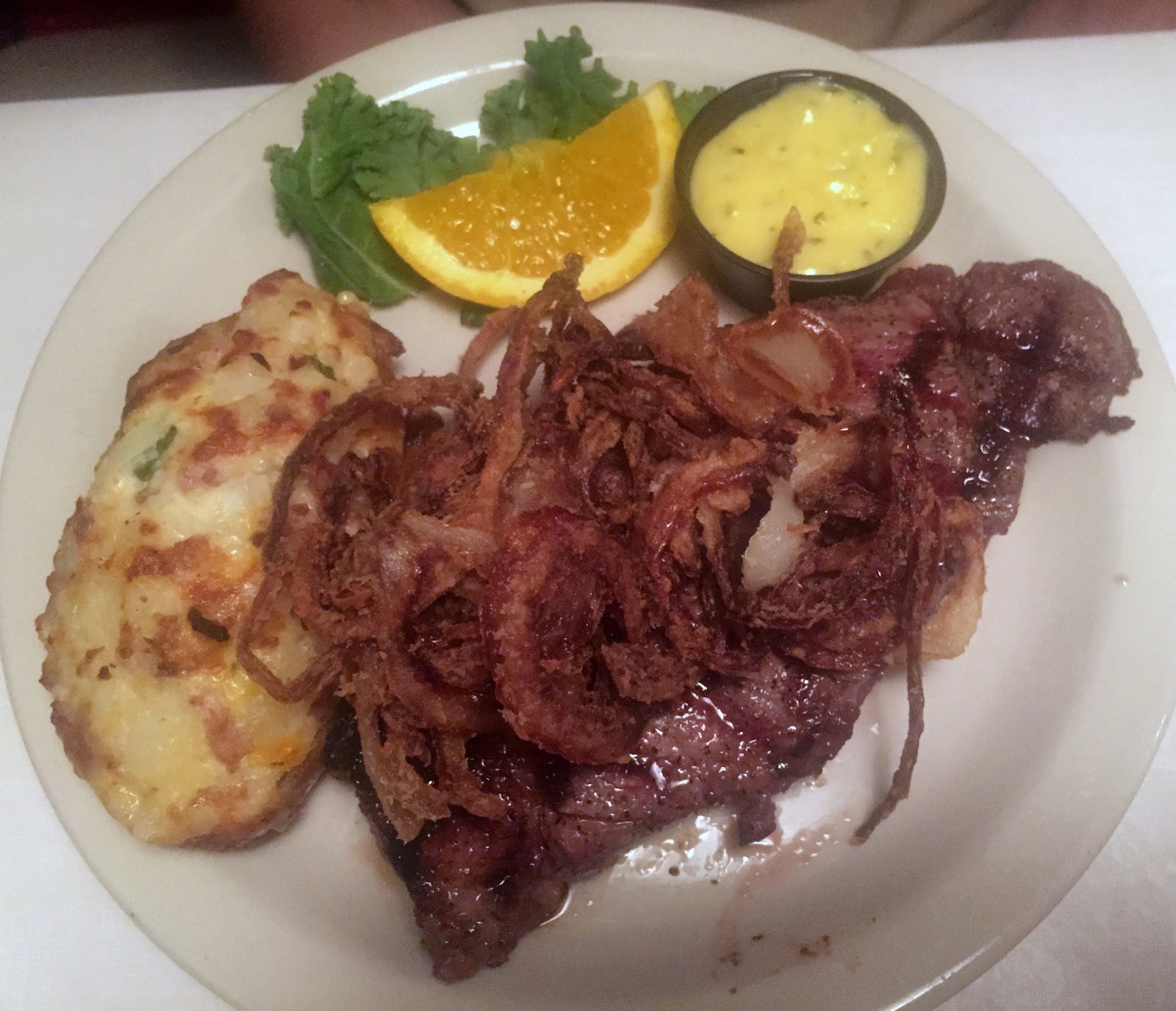 Larry got the New York Strip ($21.99) – which is a leaner cut than the ribeye (we learned that on our Certified Angus Beef trip) The 12 oz. cut, is charbroiled
and served with Bernaise sauce and onion strings.

I never understand the orange – what am I supposed to do with it? The steak was great – super tender and cooked perfectly. Larry ditched the onions but let me snag some – they were crispy and a good compliment – I didn’t eat them all – don’t like the soggy ones that get mixed up with meat juice. All in all though – the steak was really good. 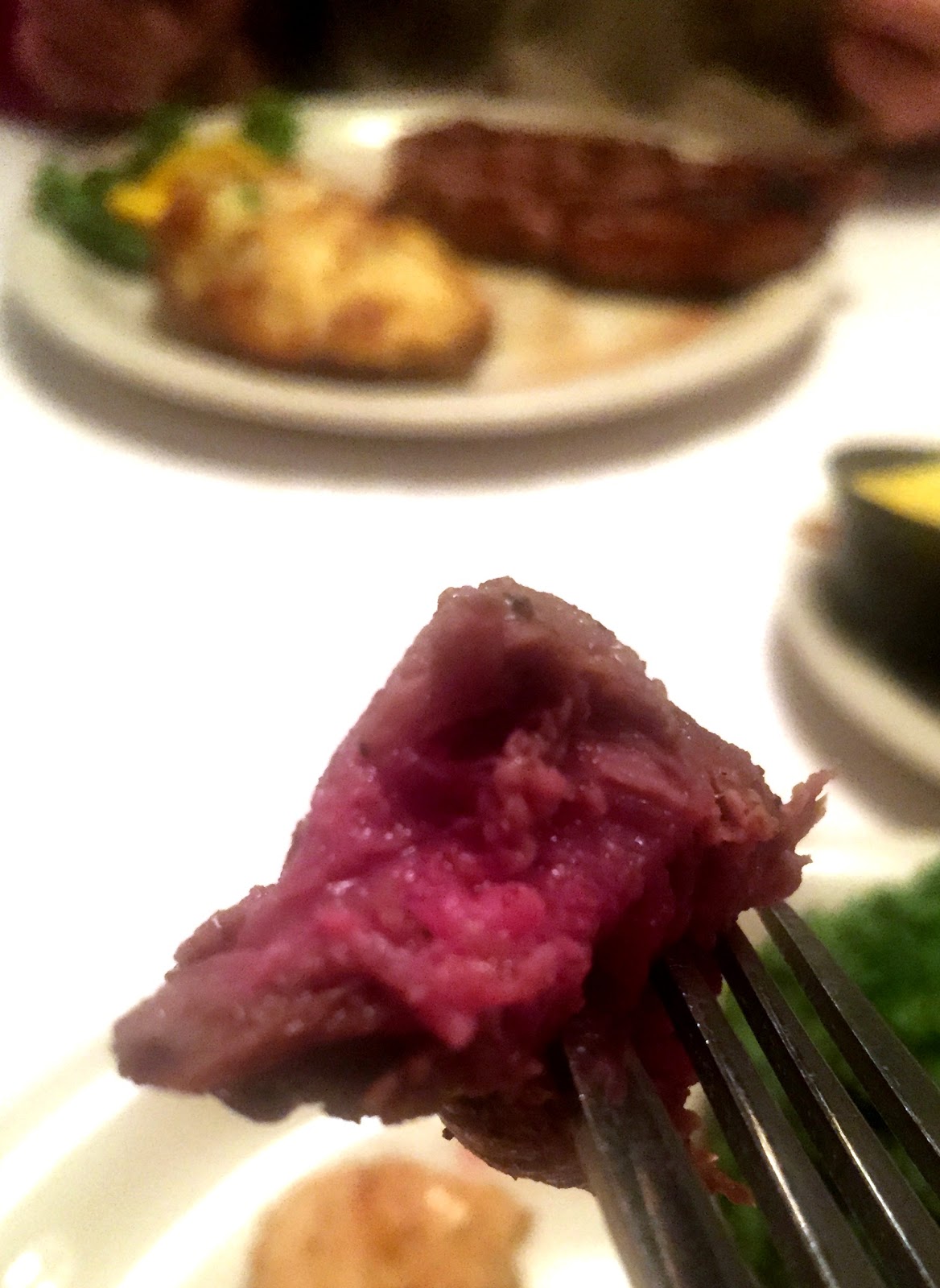 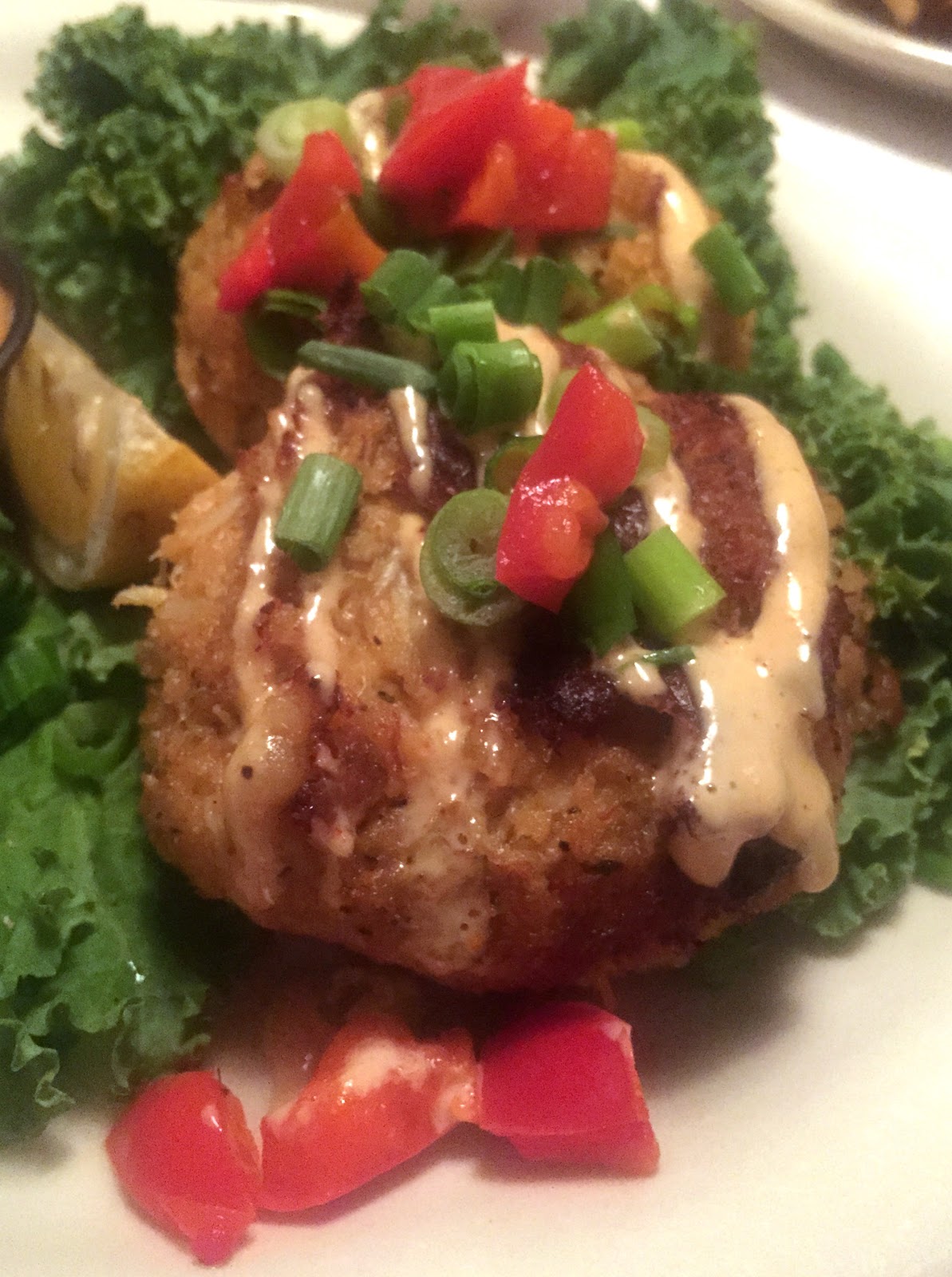 I went for the Create Your Own Combo ($22.99) and chose crab cakes and blackened sea scallops. Everything is very old school – especially in presentation. We actually got there around 815pm and they close at 9pm – there was one older couple left and that was it. They were planning on closing early until we showed up – but were very pleasant even though we were the only folks there.

The crab cakes were good – not great – I think they’re homemade but the crab is likely the kind you buy in a can and there’s an ample amount of filling. They’re very crabby but fairly typical. I liked them but probably wouldn’t order them again. 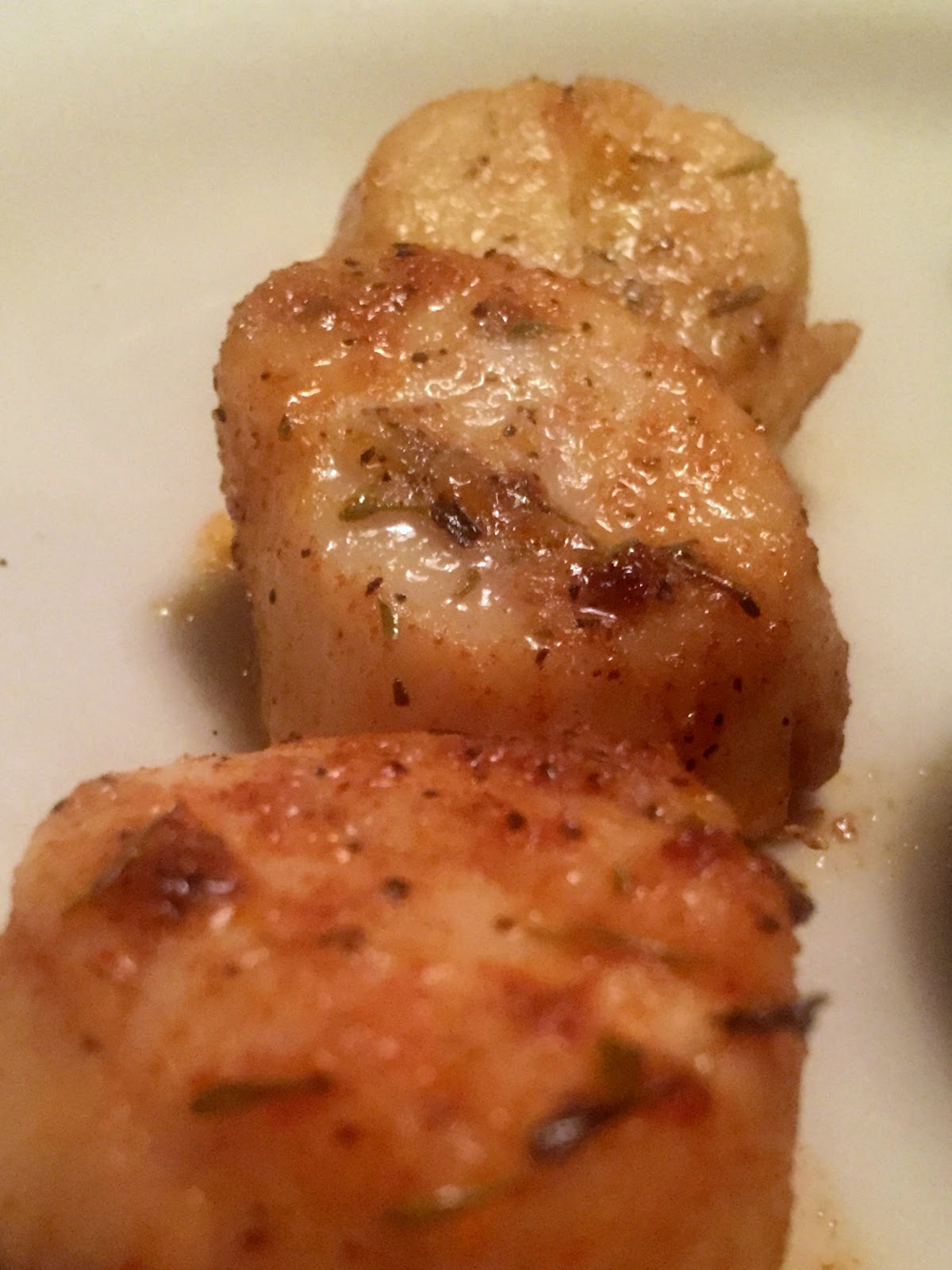 The scallops were a bit disappointing. They were small and a bit overcooked but the seasoning on them was good. 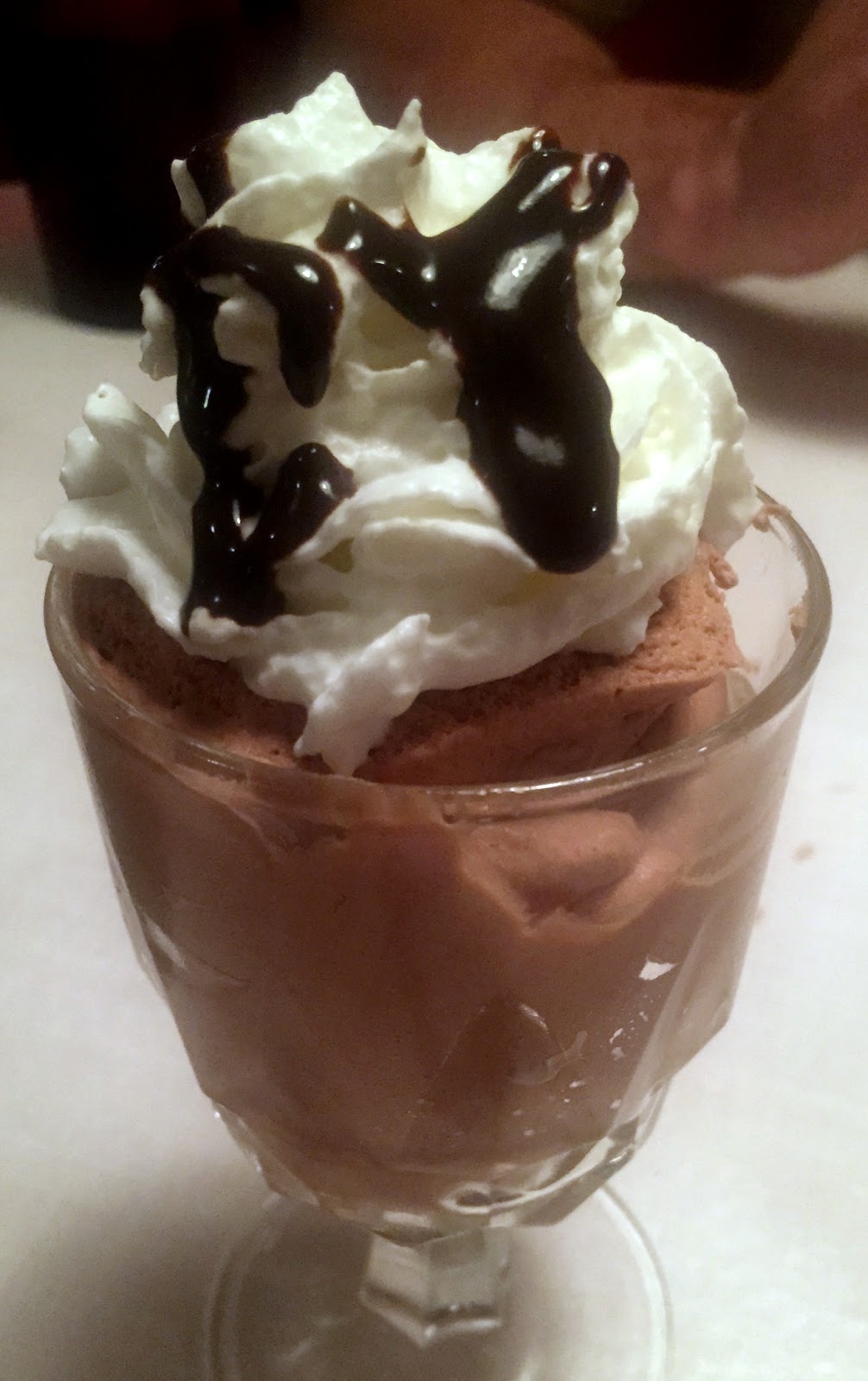 Oh and that “30 seconds from Walgreens” I mentioned earlier? Well that brings us to the Chocolate Mousse. All of their desserts are made in-house by one of the server’s moms. She was there – I was about to ask about the ingredients – when someone INSISTED he’d had mousse before and he was sure he could eat it. It was creamy and light and chocolately – very delicious – and had eggs. So he ate a few bites – I ate the rest and we got the check. 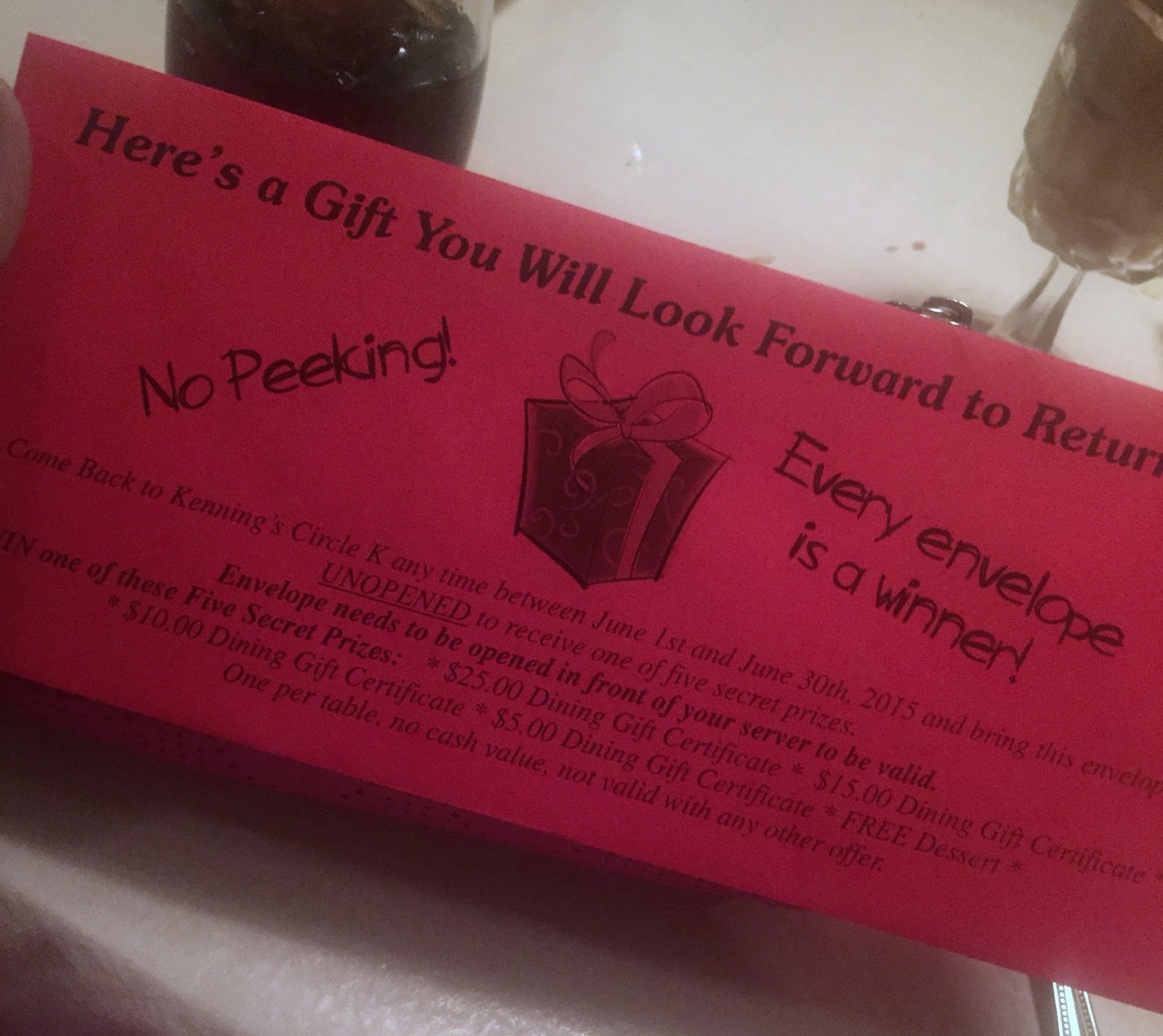 With the check came this magic envelope that we can bring back another time. There’s everything from free dessert to $25 gift certificate and you bring it to your next visit.

After paying the check pretty quickly, heading to Walgreens for Benadryl and then a stop off at the E.R. – we headed home. Whew! The moral of the story – if you have an allergy – ALWAYS ASK!

Why Should You Go? It’s a bit old school and very “west side” but of the old school steakhouses – it was our favorite. The steak was good and so were the sides. The servers were also hilarious – when you go at the end of the night – they get funnier.