I met up with my friend Lou in NKY for dinner and we tried the fairly new Lucky Duck Pub in Taylor Mill. It’s across the street from the Trifecta with LaRosas, Skyline and Graeters.

Lucky Duck is in a strip mall that is fairly new – there’s also a Mexican restaurant we’ll definitely be hitting up in the very near future! Inside it’s definitely a sports bar feel and very popular – we were there on a week night and it was packed.

They don’t have a full website – so here are some shots of their menu. There are some fun things to choose from – Taco Pizza, Deep Fried Oreos and lots of sandwiches that they put their own Ducky spin on. 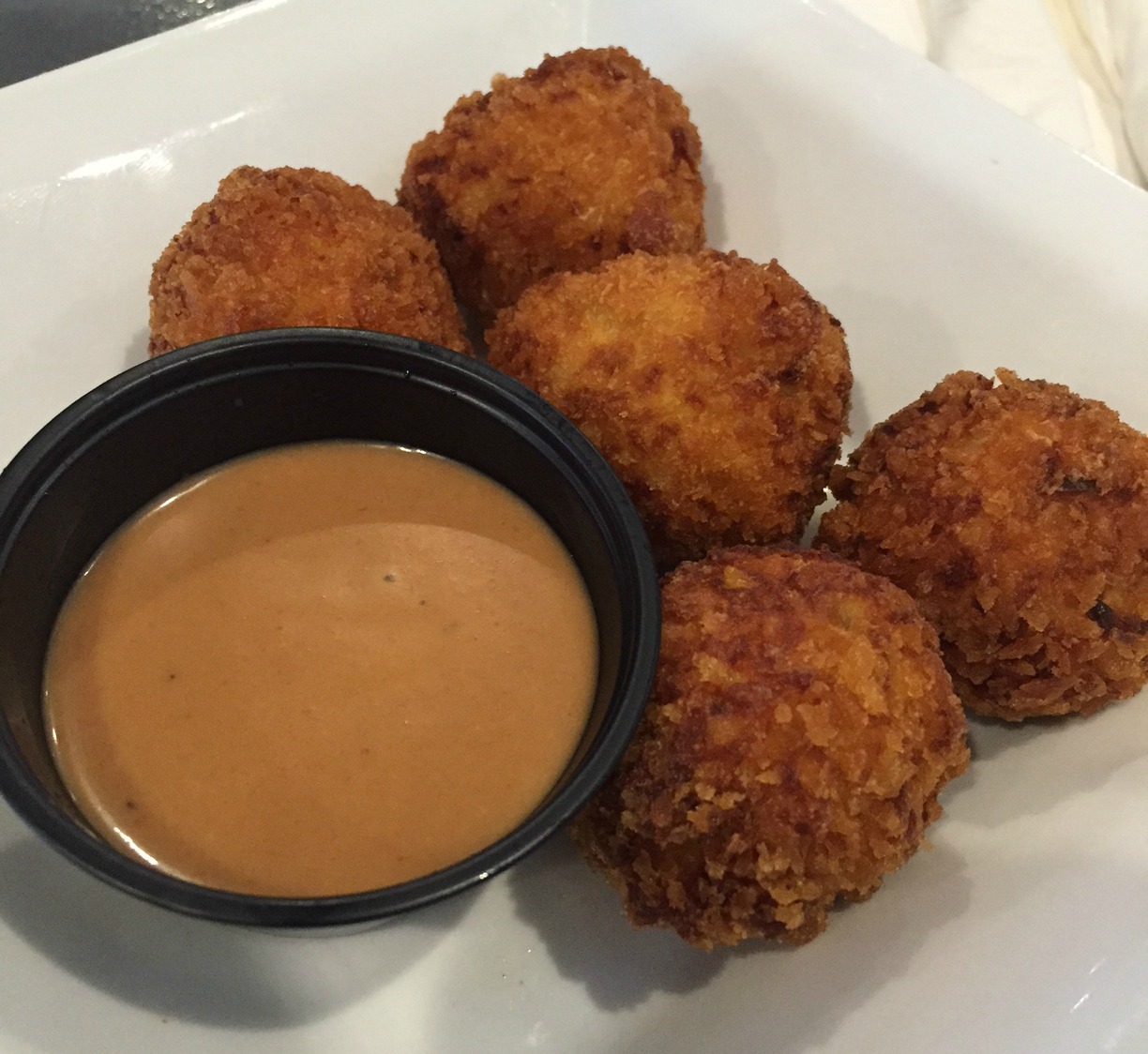 I was fascinated by the Duckettes ($6) – homemade potato croquettes that are garlic mashed potatoes, bacon and chives – breadcrumbed and fried. 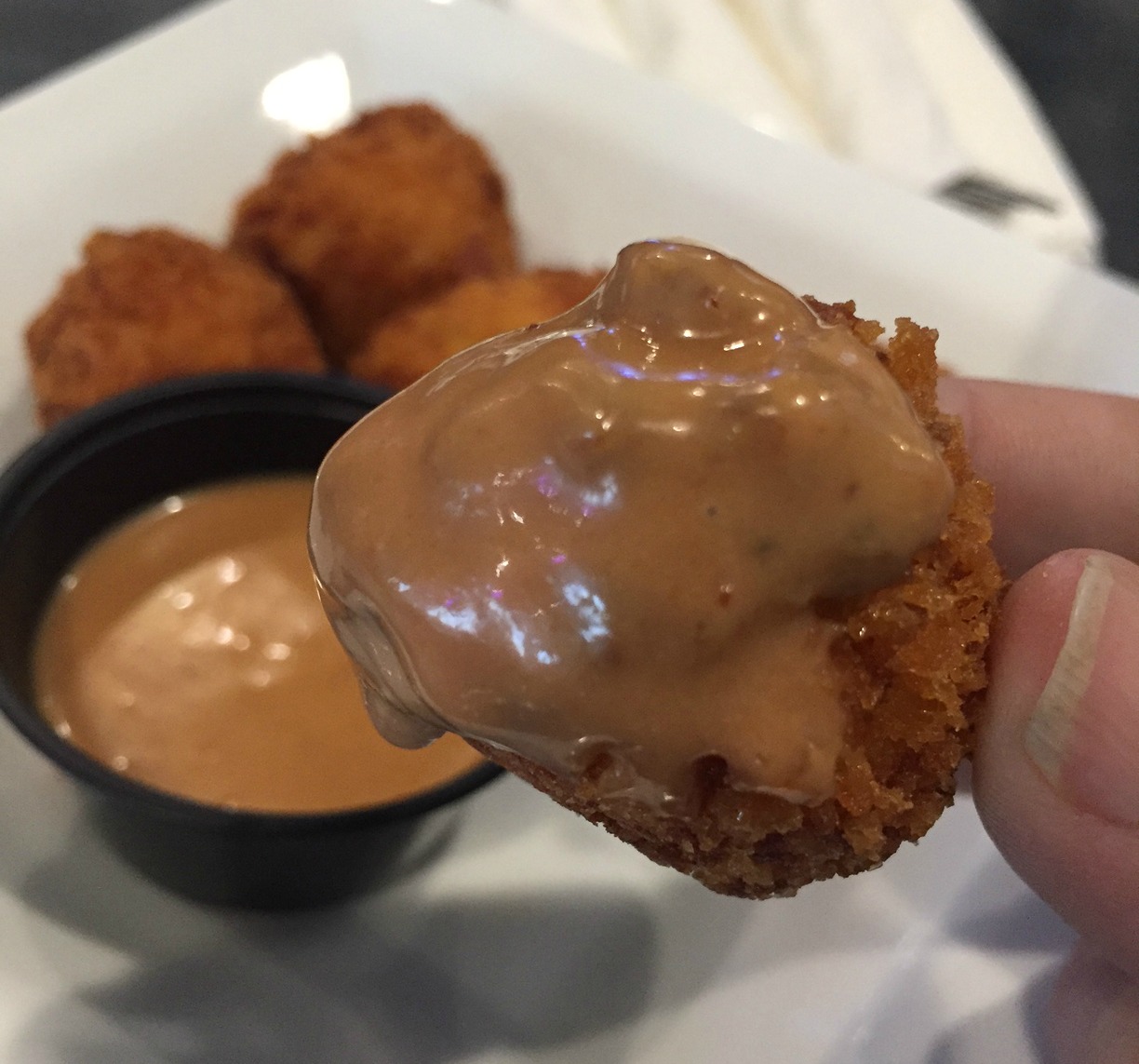 The Duckettes were served with a BBQ ranch sauce. They were very crispy and fried just the right amount. 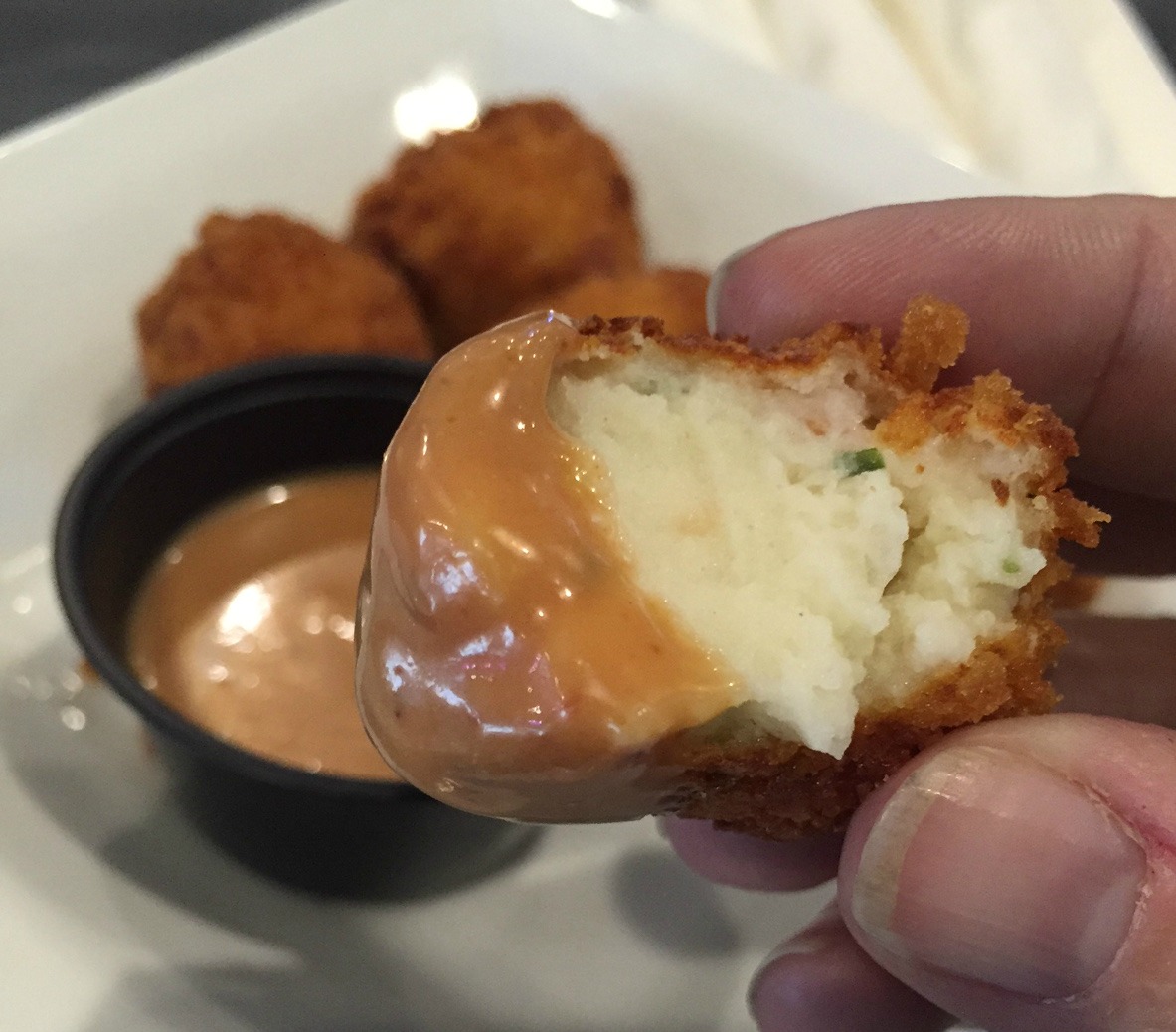 Inside tasty mashed potatoes! Overall the Duckettes were fine – maybe some cheese inside and a sour cream based sauce would have been a little better. I liked them but not sure I would get them again. 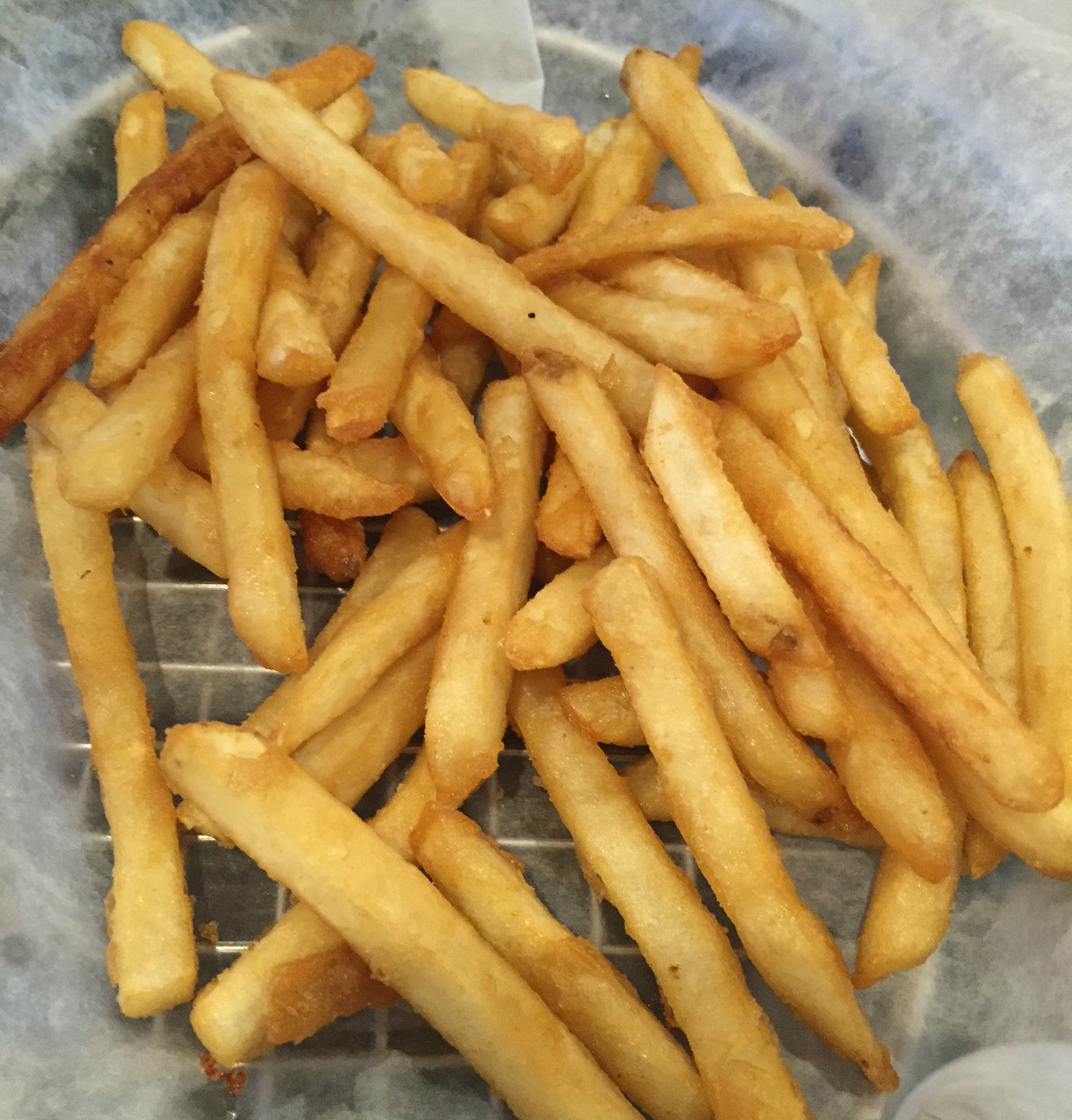 My friend Lou is very picky with what she eats and she wanted PLAIN fries – luckily that’s what they had for her. So she was happy about that. 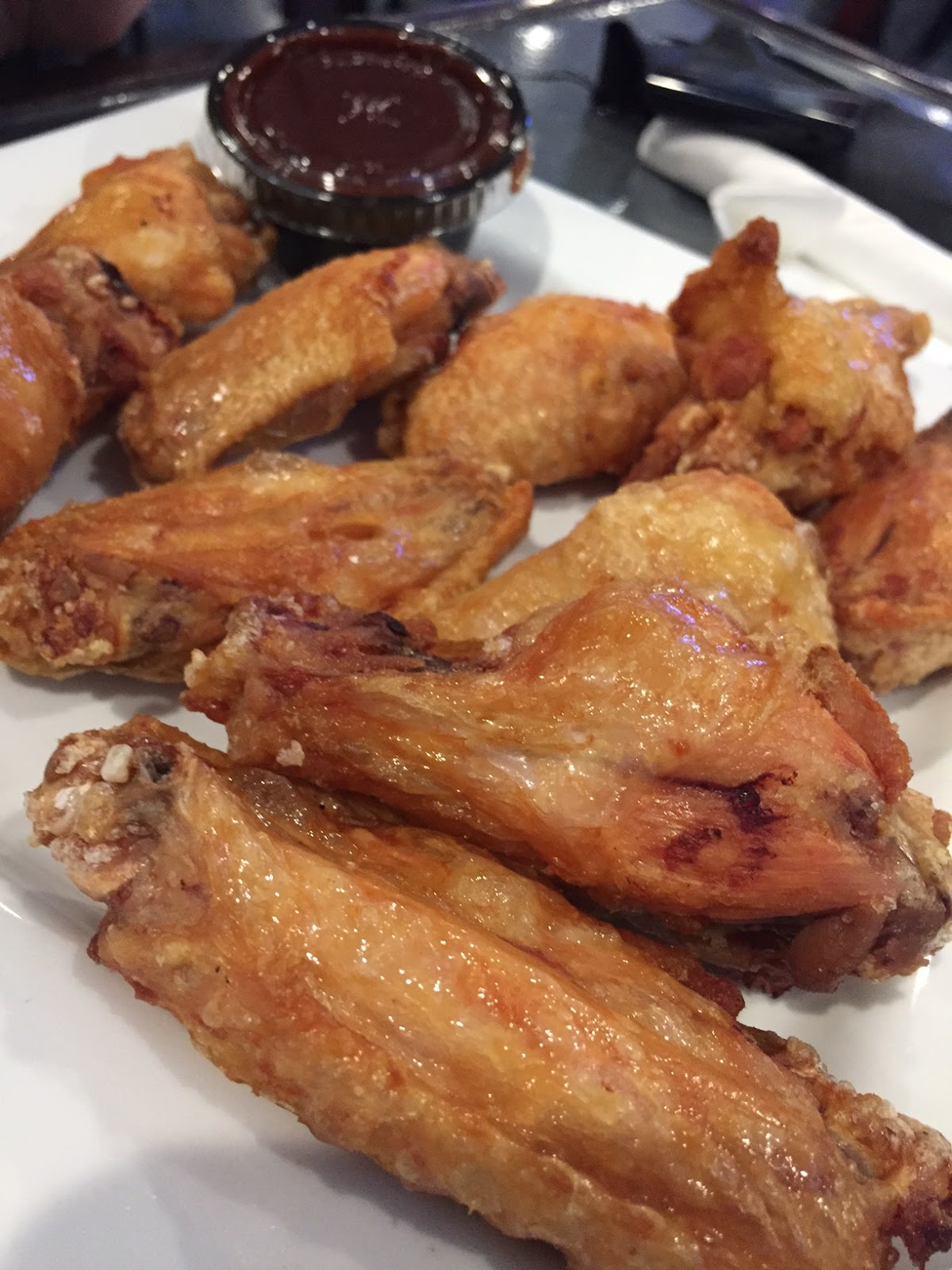 She also got wings – again – plain. ($8.75 for 10) She liked them. While her wings were super simple – they have a lot of options – with dry rubs: ghostbuster, cajun, cowbell and ranch, with sauces: duckin’ hot, spicy garlic, hot, fancy, spicy garparm, medium, mild, quackin, barbecue and garlic parmesan. 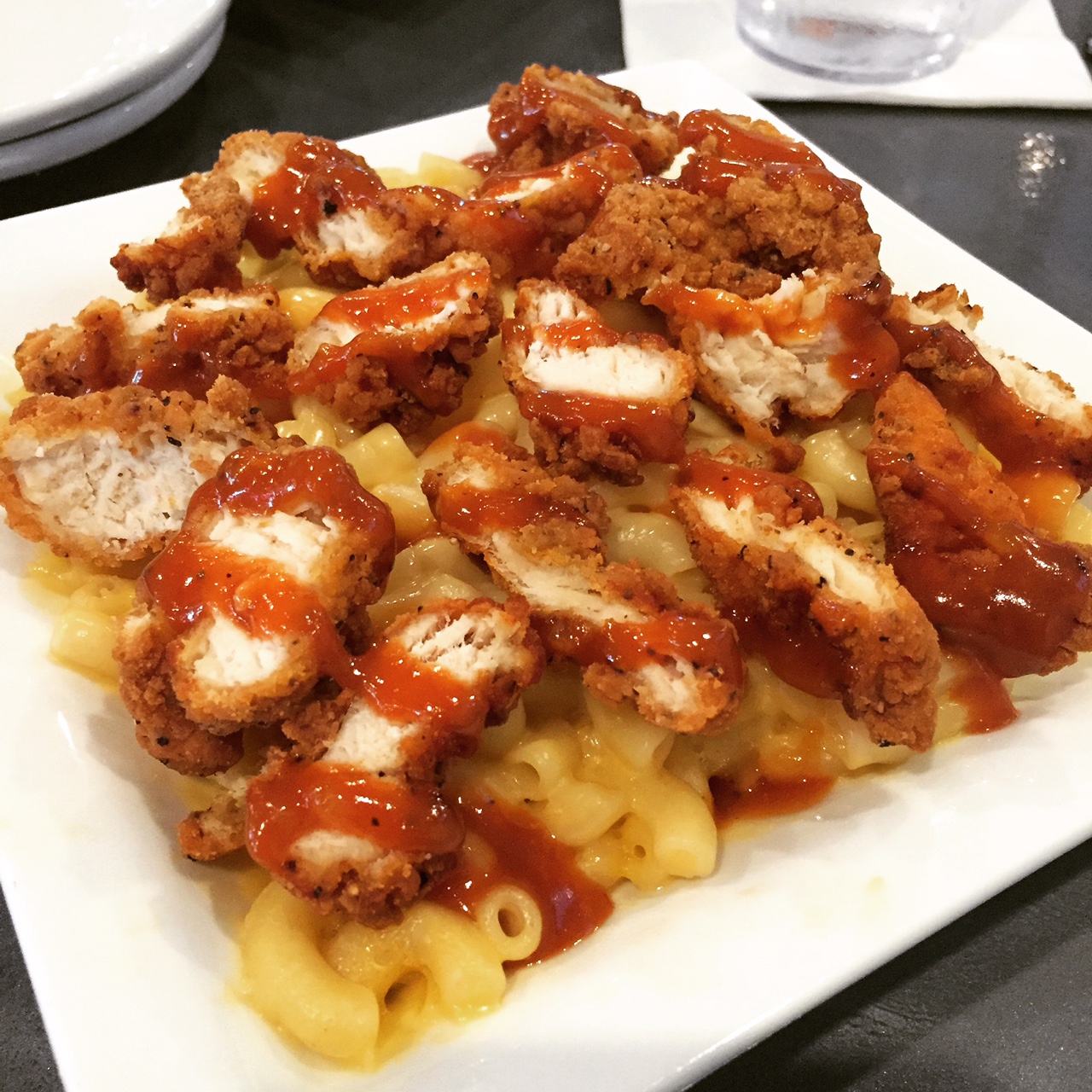 I went for the Mac N’ Quackin ($8) which was their homemade Mac N’ Cheese with fried chicken bites and their Quackin Sauce.

Unfortunately I was REALLY disappointed here. I’m a mac n’ cheese connoisseur and this wasn’t great. There was really no sauce – it was just noodles barely held together by melted cheese. It was really dry. 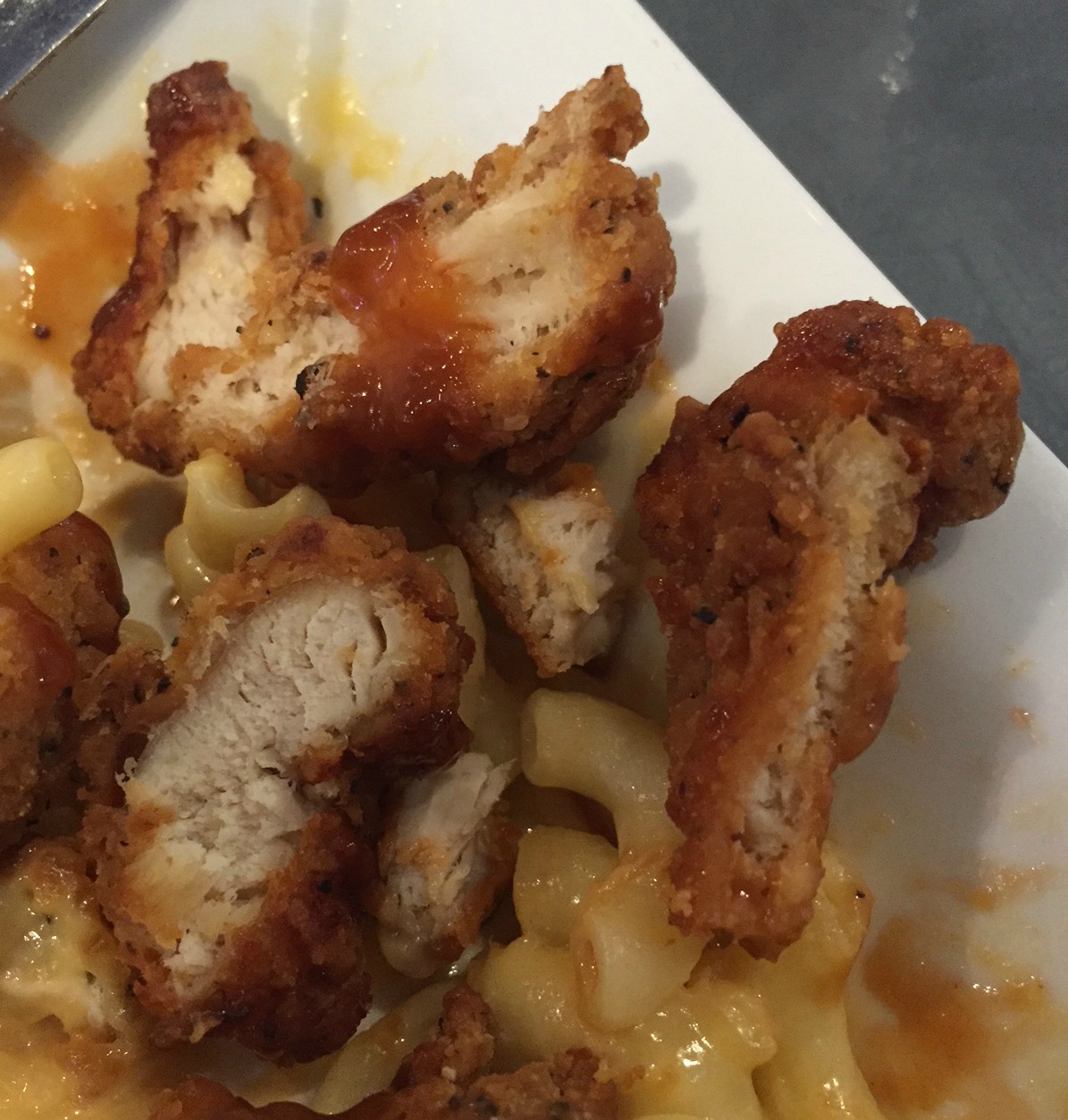 Then the chicken – it was pounded so thin with such a thick breading – you really didn’t even taste the chicken. I took a close up photo to show it a little better. I picked all the chicken off and the barely ate the macaroni because it was so dry. I guess that’s one way to combat poor choices for my diet is to barely eat it!!! (This was before I actually started Weight Watchers.)

Why Should You Go? The wings looked good and I’m sure other things are good – the place was packed. I just didn’t care for the Mac & Cheese.