Some times – photos get lost in my phone and I forget about them. Ugh – then I find them and think oh man!!!! I went there like two months ago!!!! Such is the case with Pieology – it hasn’t quite been two months but it’s been a while! So here we go! 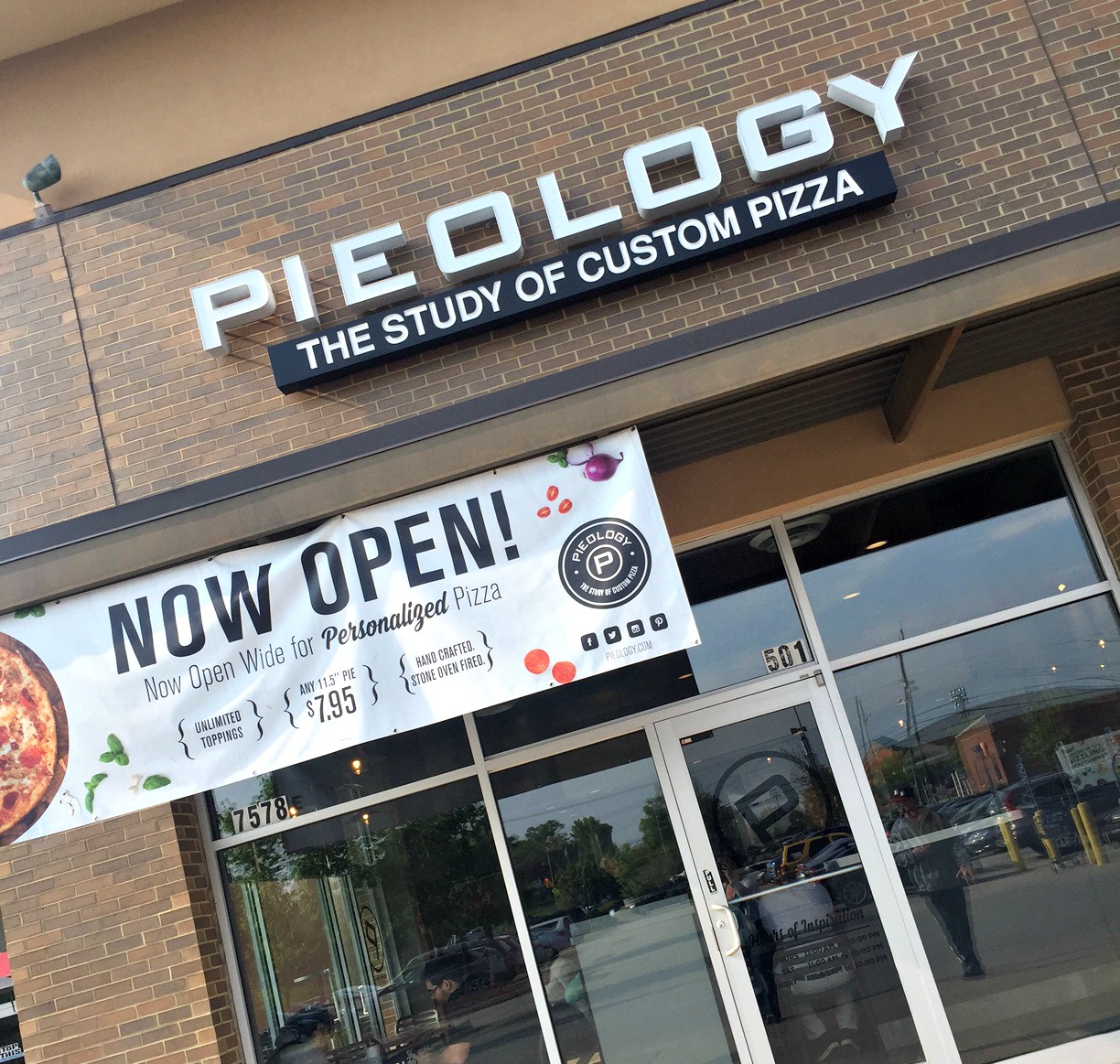 There are two locations – Beechmont and Clifton – I went to the Beechmont location – which is in the outdoor Beechmont mall next to the Top This donut place. Larry was convinced he’d be making donuts after pizza – but I wasn’t so sure. Turns out I was right – he was too full – we’ll have to celebrate donuts another day. 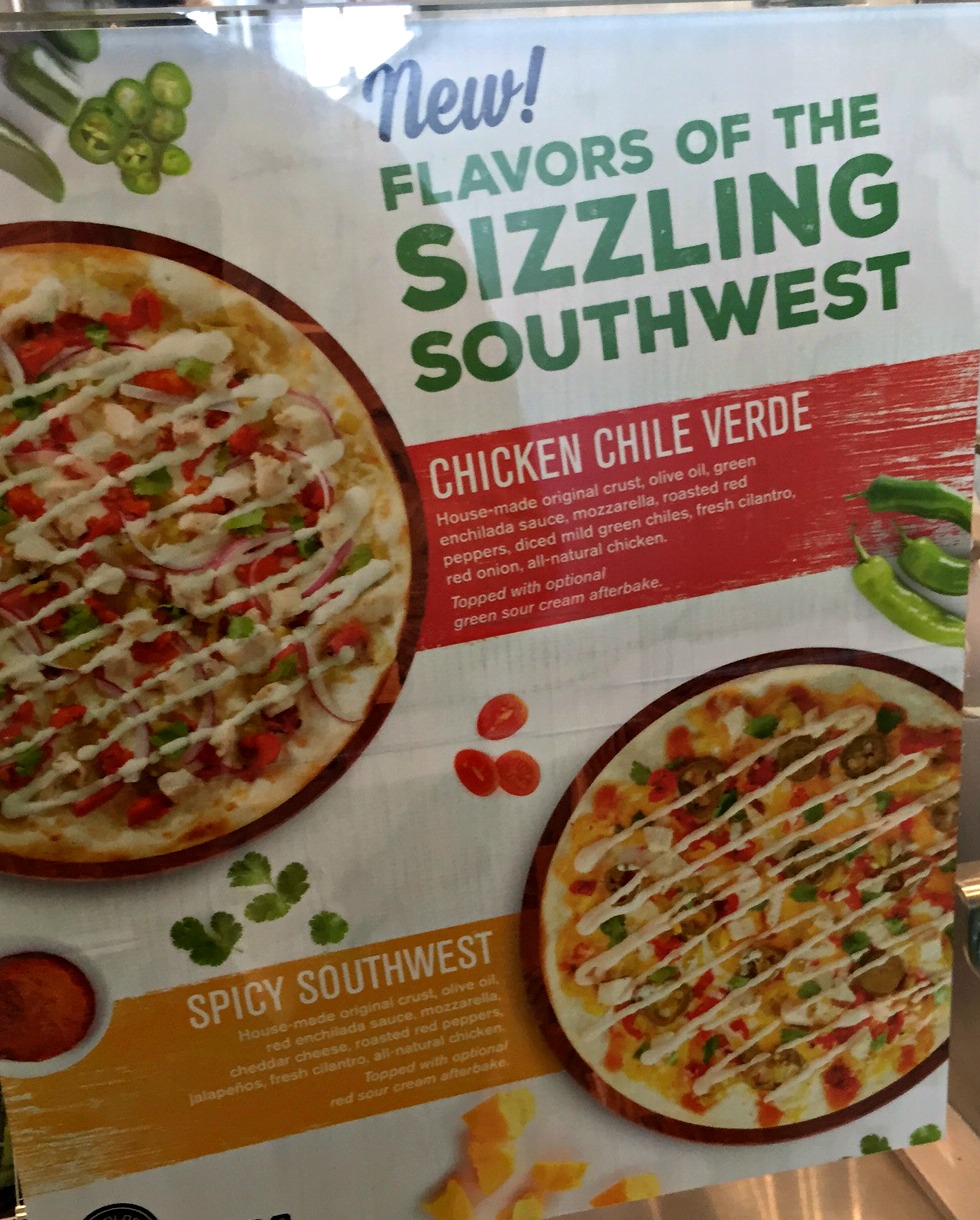 The folks at Pieology invited me out to try their summer flavors – Chicken Chile Verde or Spicy Southwest. 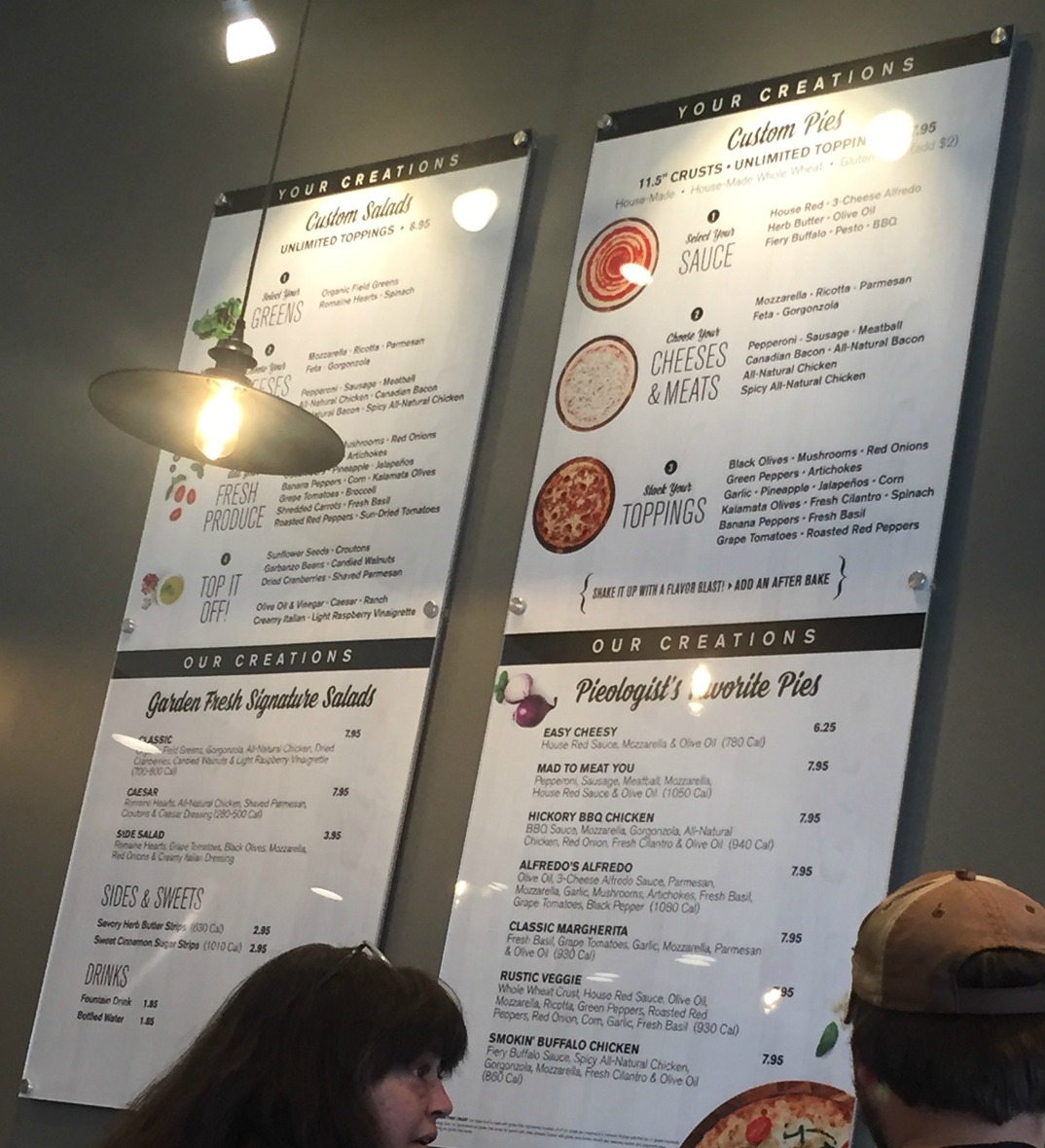 Pieology has salads and pizzas – you can choose from their pre-selected combinations or create your own. Some of the pre-selected combos are things like Rustic Veggie, Margherita and Buffalo Chicken. 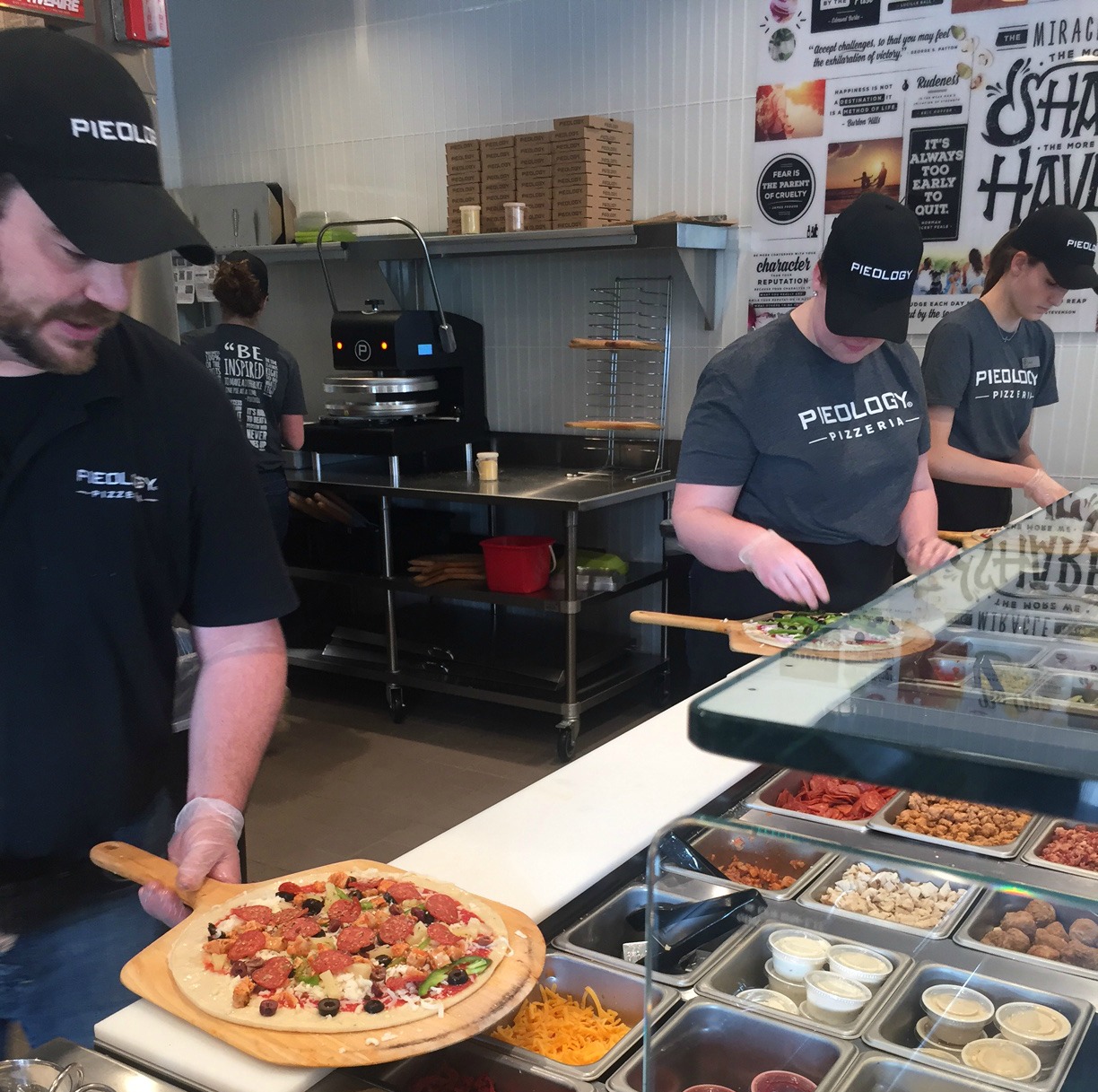 Their toppings bar has pretty much any thing you could think of putting on a pizza. The staff was super friendly and Larry had a ball making his own pizza. He went for sausage, pepperoni, olives, green peppers and so much more – it was loaded! 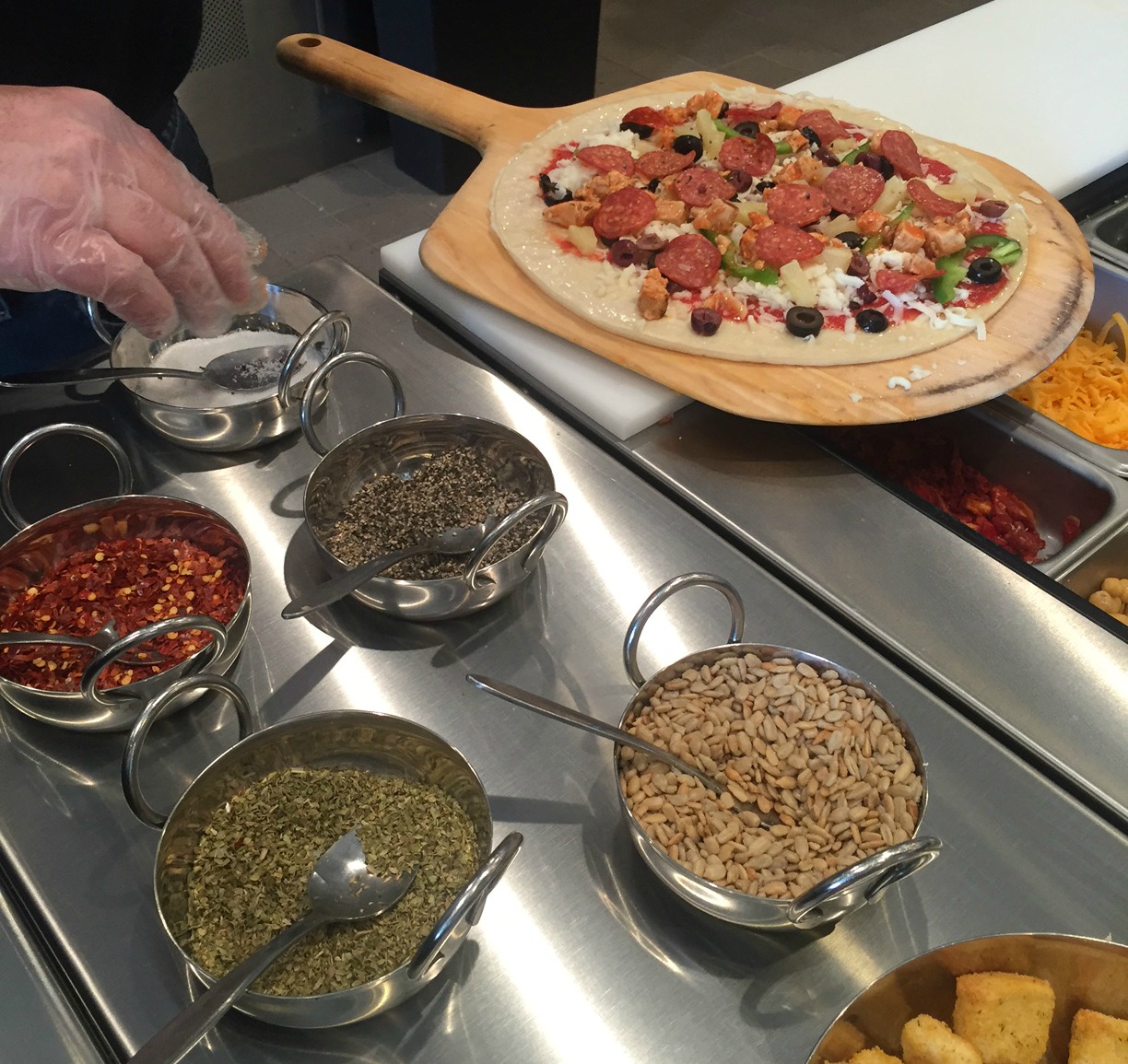 They also add seasonings at the end and have a variety of sauce bases – in case you want white, red, oil or pesto! 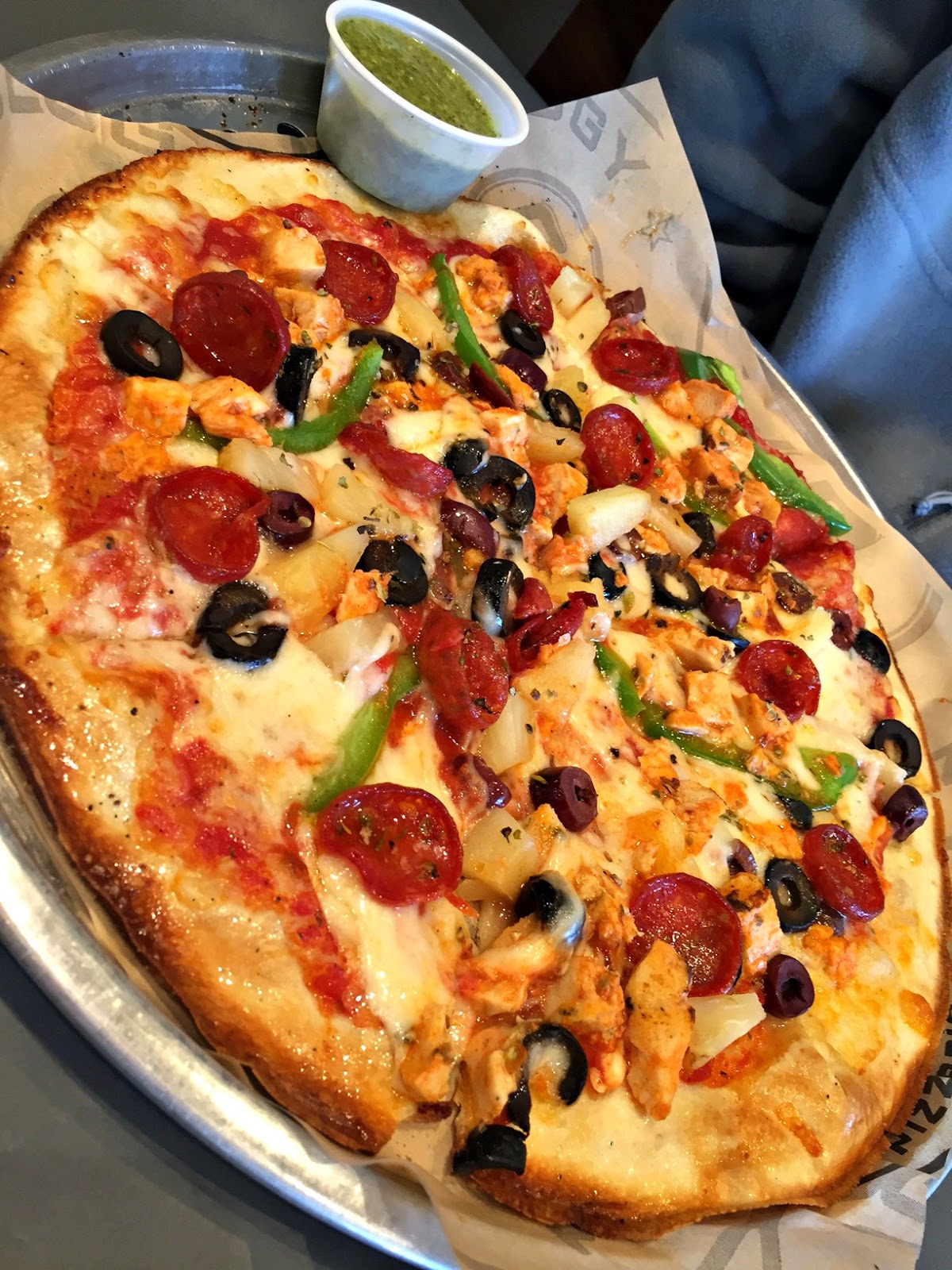 It definitely looked delicious and super crispy – they have the big ol’ pizza ovens they pop them into. It’s sort of a Chipotle-style ordering system where you watch them make it and then have a seat and they bring you the finished pie. 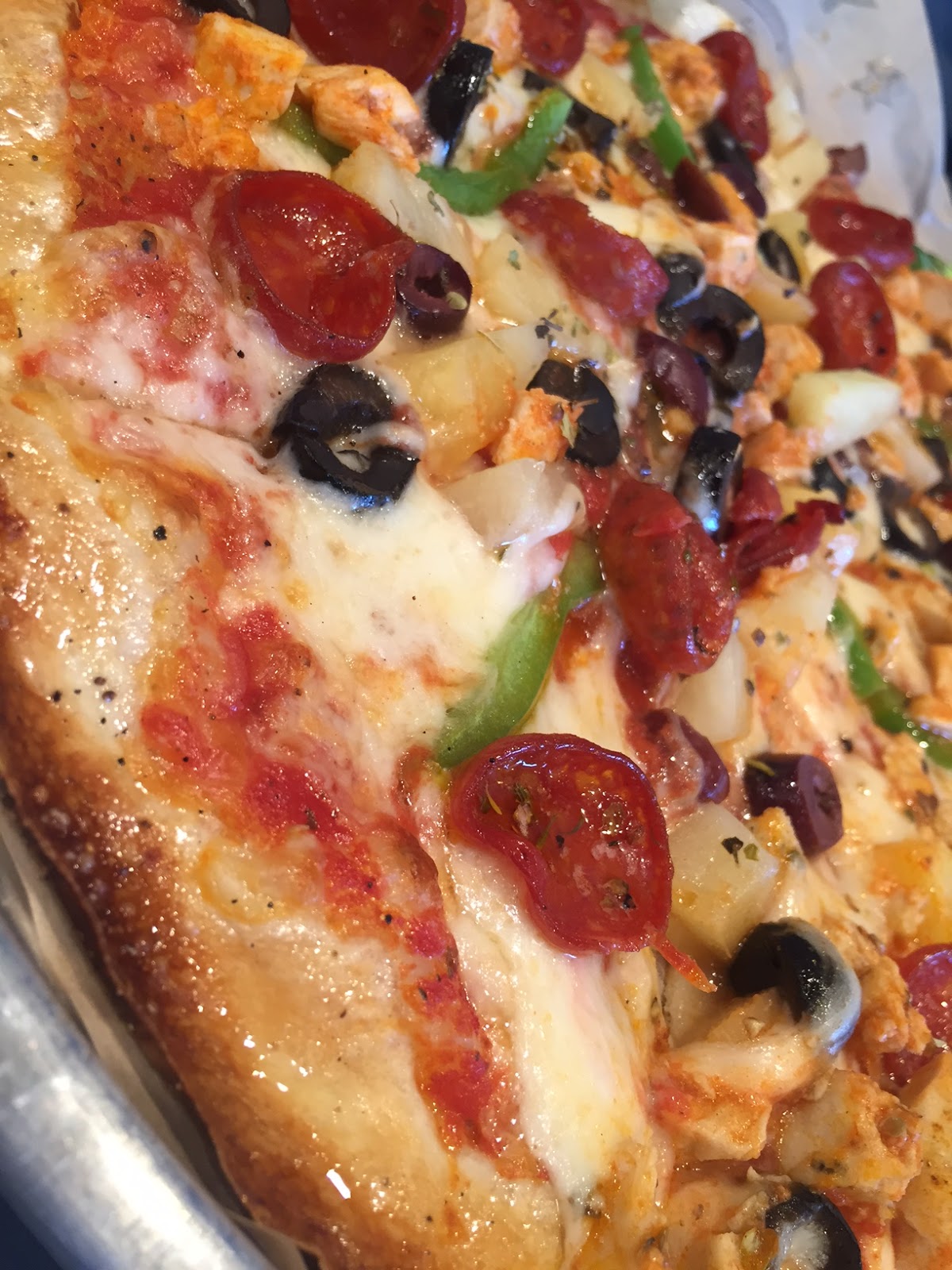 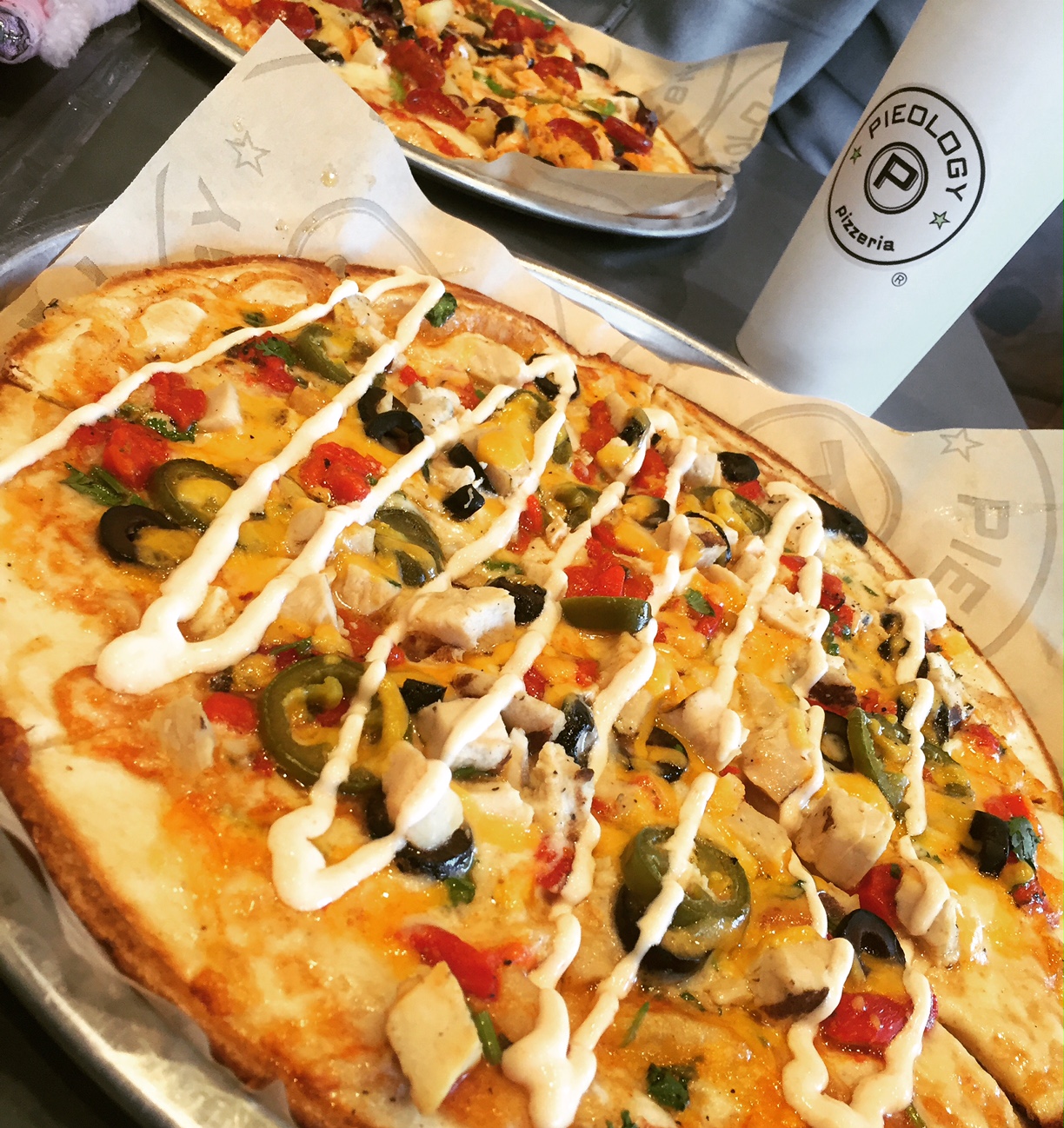 I went for the Spicy Southwest and it was definitely zippy! I had to take about half the jalapenos off because it was too much but I love the pickled kind so much I definitely kept as many as I could! The chicken was also juicy and tender. It’s not a combo I would put together on my own – but I liked it. 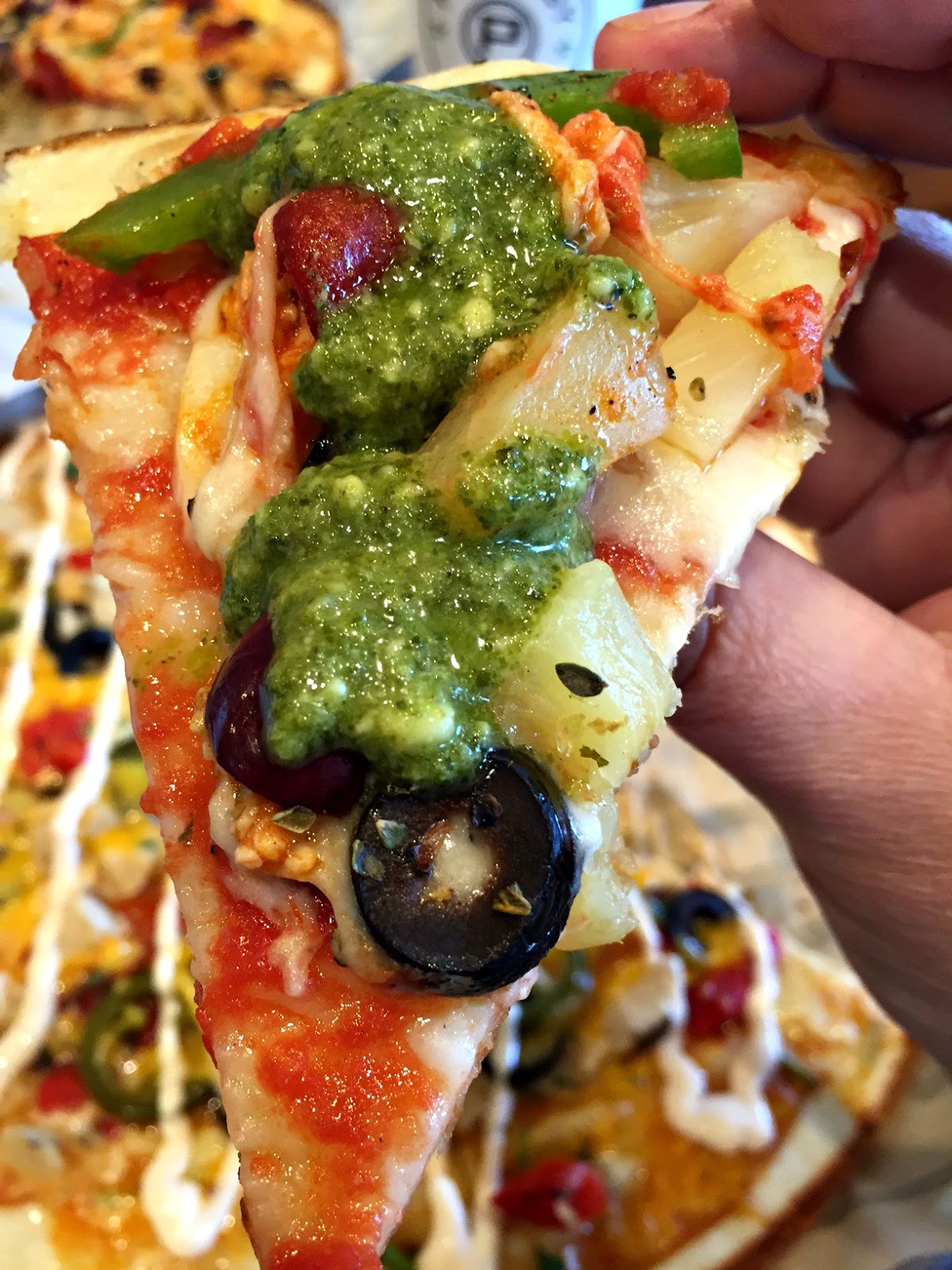 They gave us a cup of pesto to go with Larry’s pizza so I had to try it – I liked it a lot! Full of basil and garlic and yum. The crust on these pizzas is super thin but even with a bunch of toppings – it holds up to the droop test. 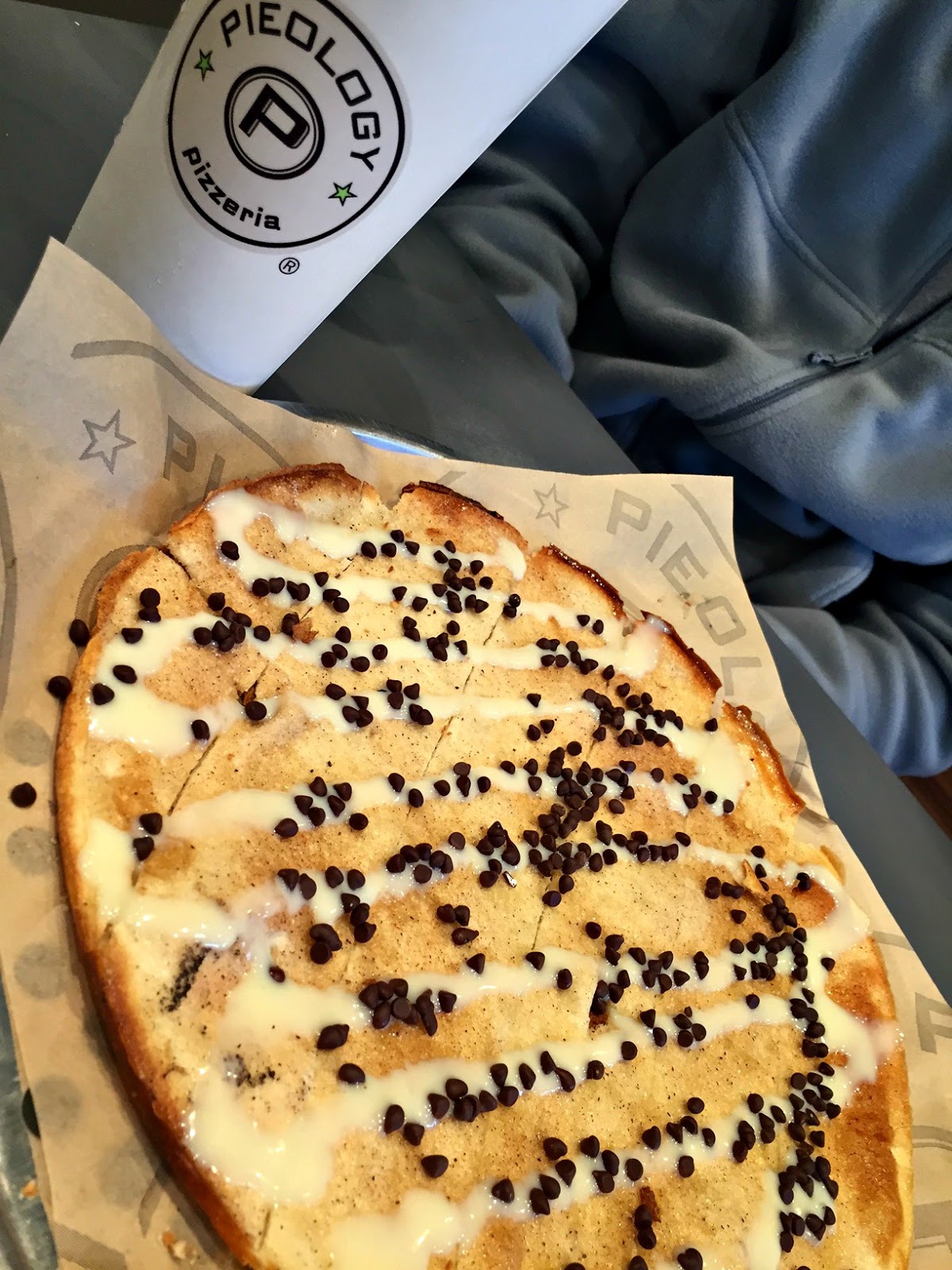 They also gave us a dessert pizza to try – it’s the regular pizza crust drizzled with cinnamon sugar, chocolate chips and frosting. I didn’t like this as much as I’d hoped – it was very crispy with little “bread” – I wouldn’t get this again. 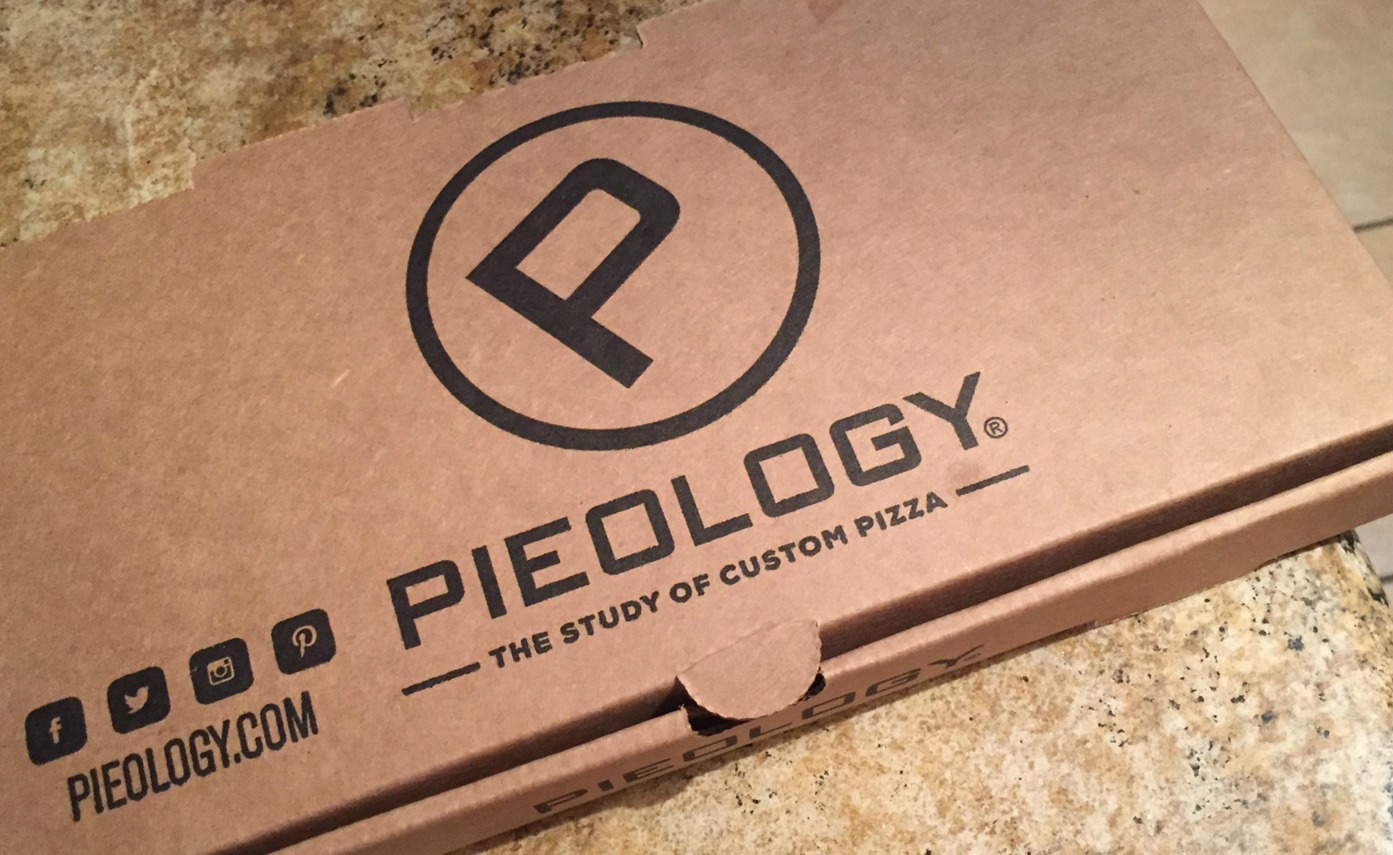 I loved their take-home boxes – they’re the perfect size for half a pizza – which was a unique way of creating the boxes. Larry killed his whole pie but I was only able to finish half so these boxes were perfection.


Why Should You Go? There are quite a few of these “fast-casual” pizza places around but I definitely like this one and would go back. The pies are less than $8 – so it’s a good deal too – especially if you could share!