Well – in terms of restaurants in the new Horseshoe Casino – 2 down, 3 to go. A couple of weeks ago – I went to Cafe Italia – the “fast casual” spot and now – Bobby’s Burger Palace! 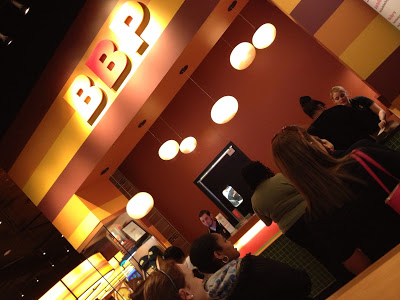 There was obviously a lot of excitement around BBP – since it’s the first real “celebrity chef” restaurant in Cincinnati. We did have a short wait in line and were actually just outside the restaurant – but it moved very quickly and we were to the counter in less than 10 minutes. 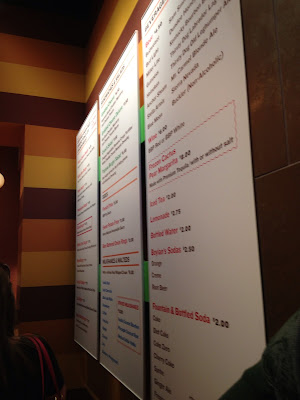 The time in line gave us a chance to peruse the giant menu on the wall – there were burgers, chicken, salads, sides and milkshakes! You order at the counter and take your number to your seat – then the staff brings the food to you. 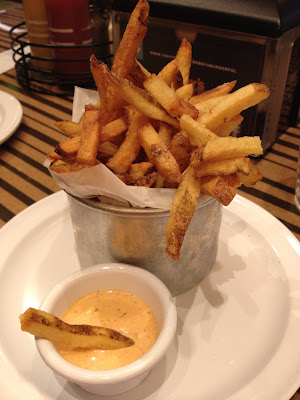 The fries ($3) were similar to Penn Station – so I’m going to guess they’re fried in peanut oil. The fry sauce they came with was pretty tasty as well and it’s definitely enough for two people to share. 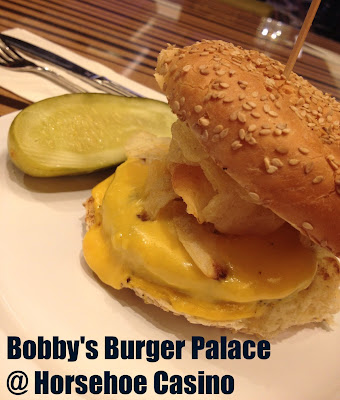 I went for the Crunchburger ($6.75) which was double American cheese and potato chips. They also ask you how you want your burger – which is nice. The bun was extremely soft – and the burger was good. While not the “best burger” in Cincinnati – I did like it.

The seating is mostly “diner” style at a counter – it is bigger than you’d think from when you walk by. There’s not much ambiance but I think it’s meant to kind of move you in and out pretty quickly – because there is ALWAYS a line! 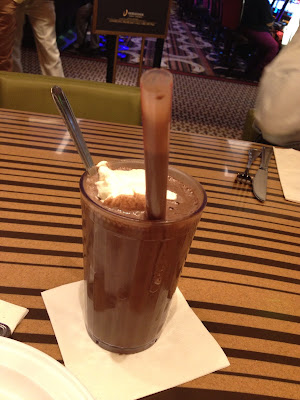 I also tried a Dark Chocolate milkshake ($5). They have 10 flavors of regular milkshakes plus 3 spiked versions. The straw is ginormous! I have to say I didn’t love the shake – it was really rich and just a little too much for me. My friend Buck on the other hand LOVES the shakes! We work down the street and at least once a week he heads up for a milkshake.

Why Should You Go? With a beer and a milkshake – the ticket was nearly $30 – so it can be a little pricey. But I think the next time we would probably just stick with burgers, one order of fries and sodas. The burgers are good and I’m looking forward to trying the Santa Fe (chips & queso on a burger). Service is also very friendly as well.