I love being invited to new restaurant openings – it’s always fun to try new foods and get a little bit spoiled. Last week the folks at Rusty Bucket invited me to try their new location in West Chester’s Liberty Center. If you haven’t been to LC – it’s the new Kenwood Mall – at least in “cool factor” – they have everything – it’s this whole little neighborhood with new stores, restaurants and a ton of cool stuff! 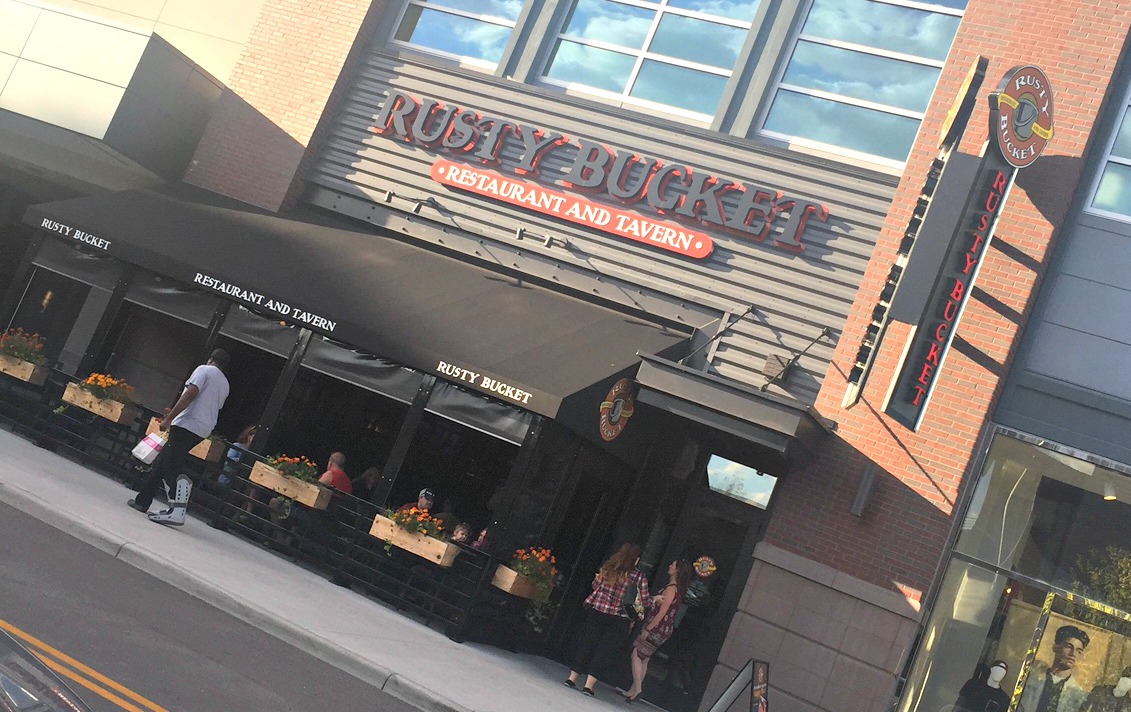 Liberty Center has an interesting neighborhood type layout and there are parking lots and a garage but there’s also street parking in front of places – so if you’re lucky and have a specific place you’re going – you can get a good spot. The meters are monitored 24 hours/day and the money goes to local causes. 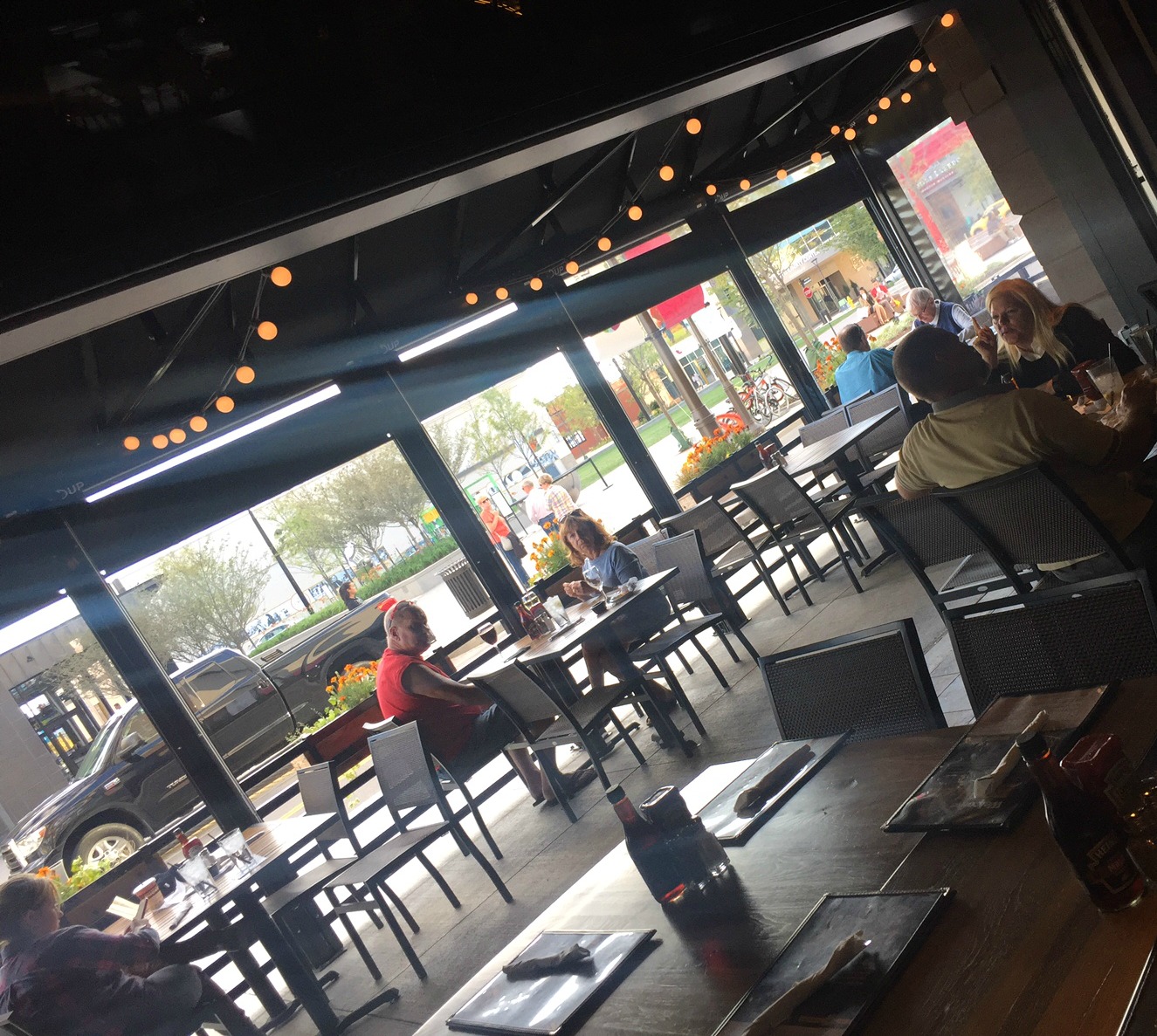 There’s a huge patio area in the front that they open up on nice days like this one! 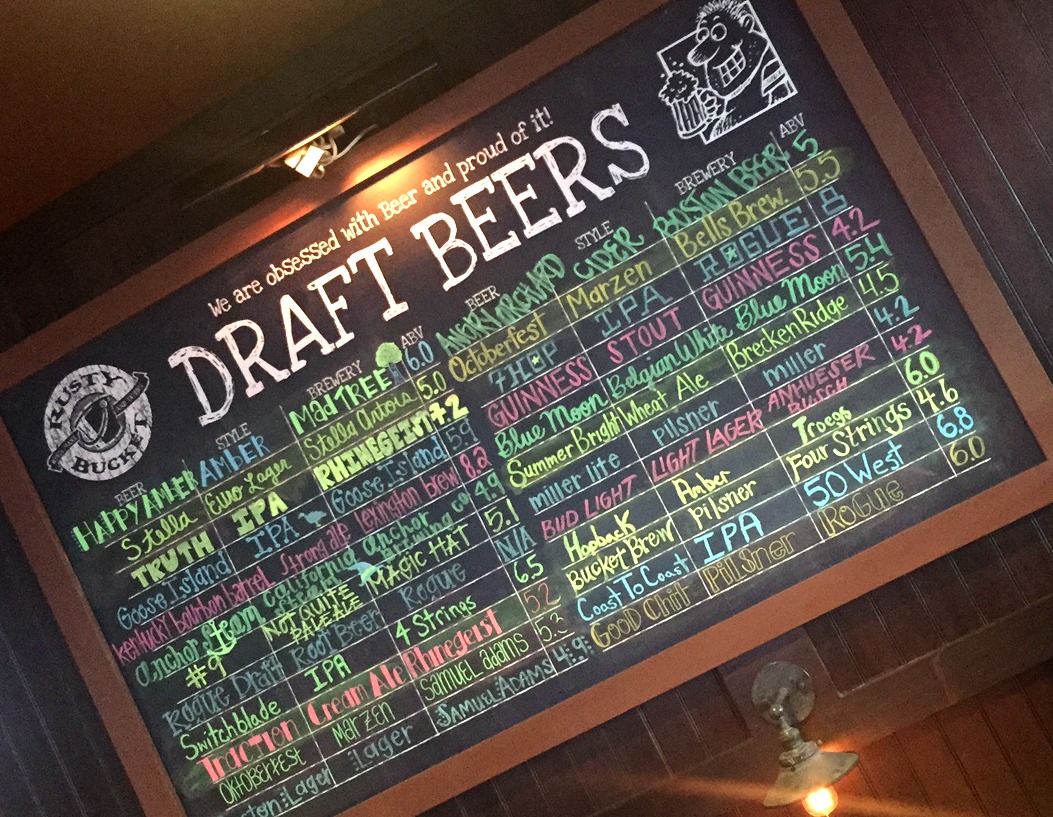 They have a huge beer selection with draft beers galore! 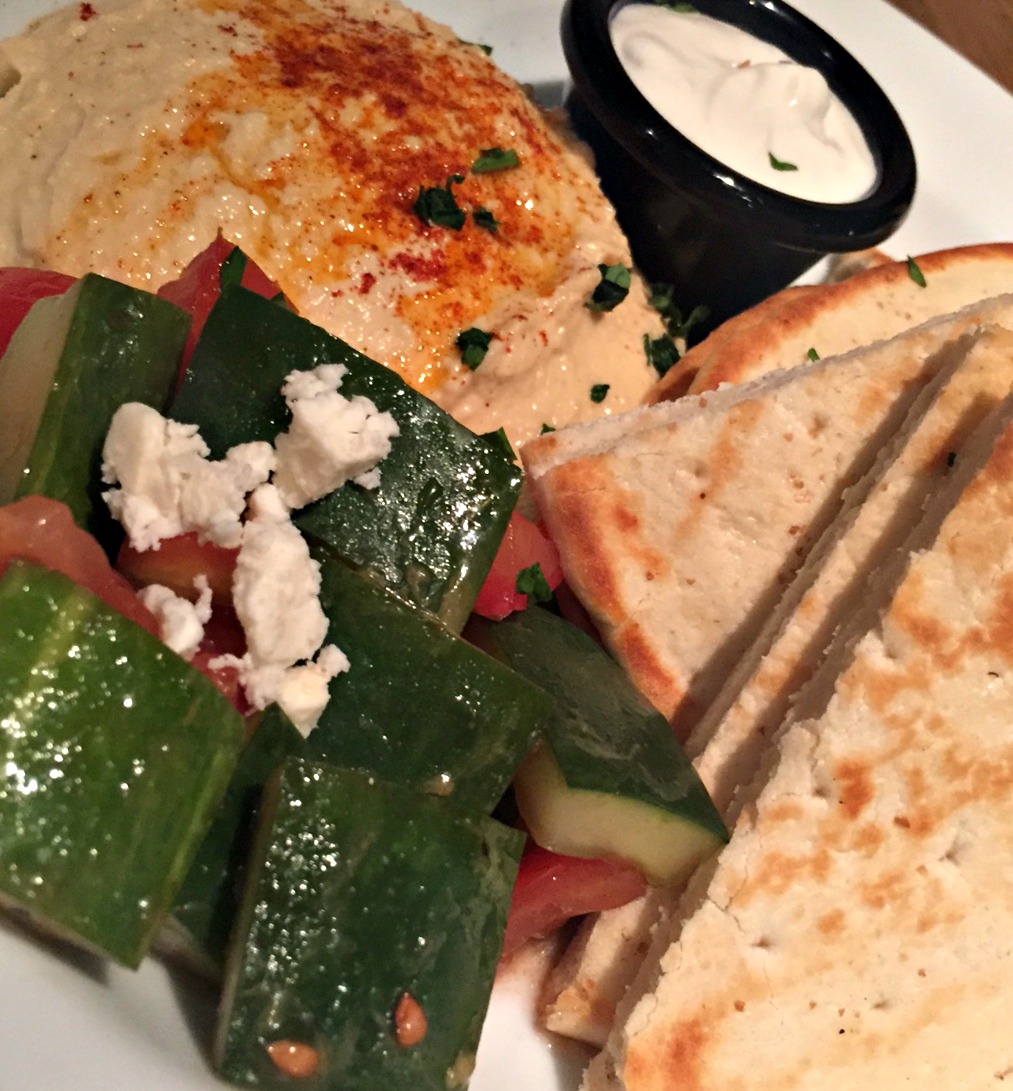 They fed us so much food! Luckily they boxed up the extras for us to all take home – so here goes – I feel like we tried the whole menu! First up was Hummus served with grilled pita and tzatziki. I think what I liked most was the marinated tomato & cucumber side salad – it was so good! The hummus was good too! 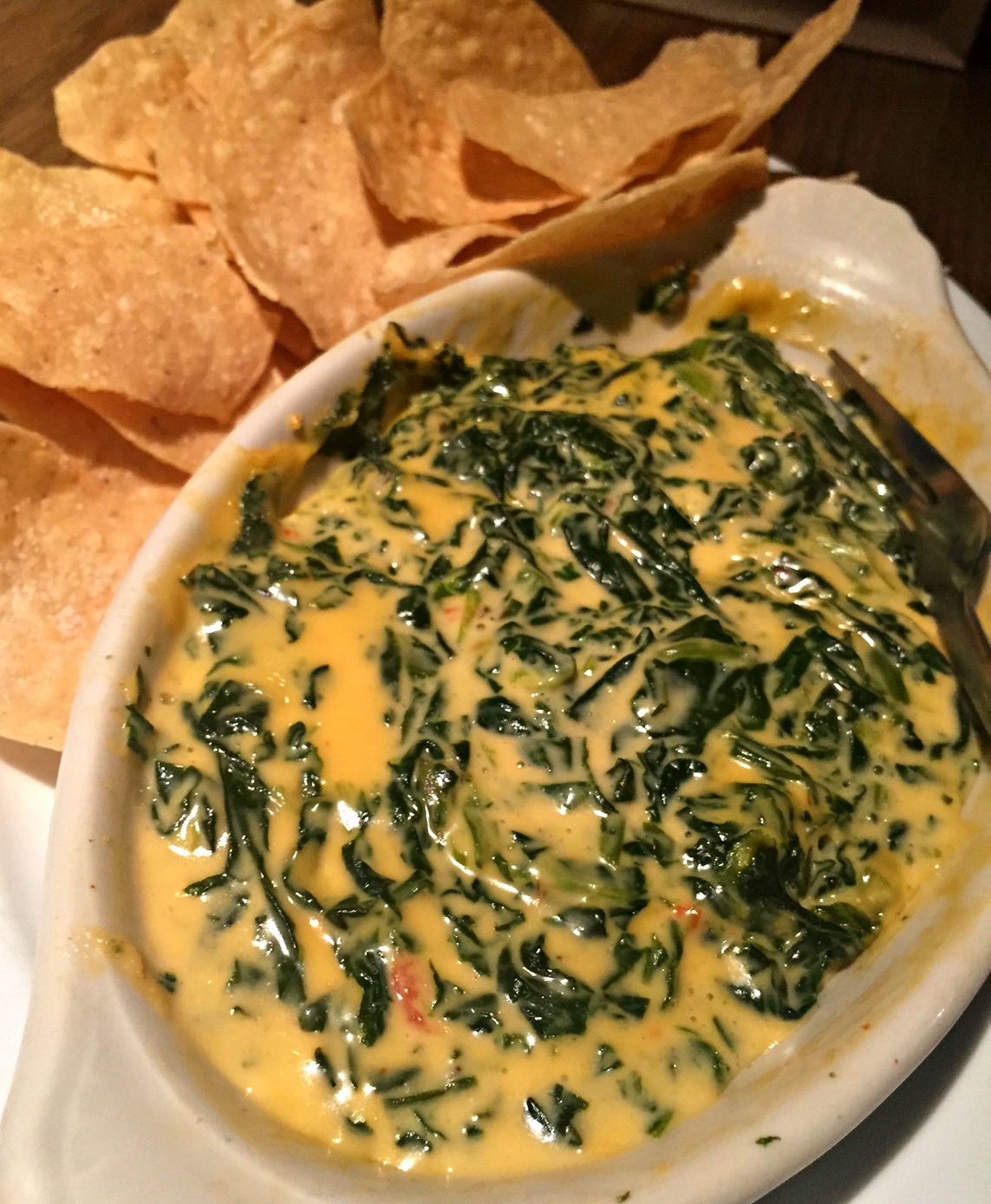 Now for one of my FAVORITES of the night – Spinach con Queso – spinach, white wine and cheese – served with chips. I could have killed this whole thing – it was sooooo delicious – and I totally called dibs on the leftovers for this and it may have been my breakfast the next day. 🙂 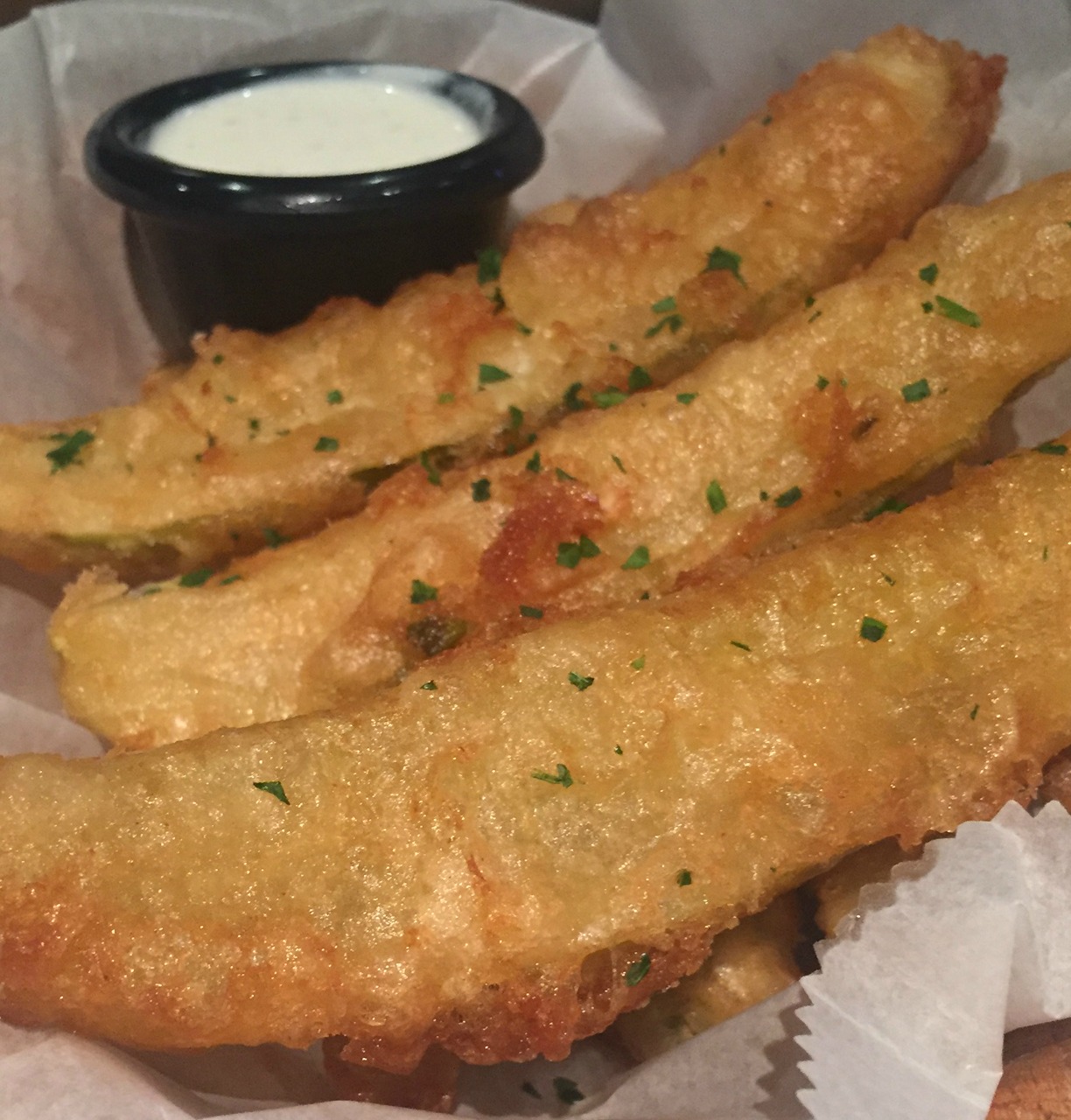 The Deep Fried Pickles at the bucket are a signature dish and really good – they batter dip spears and serve them with yummy ranch. Hot and zingy. 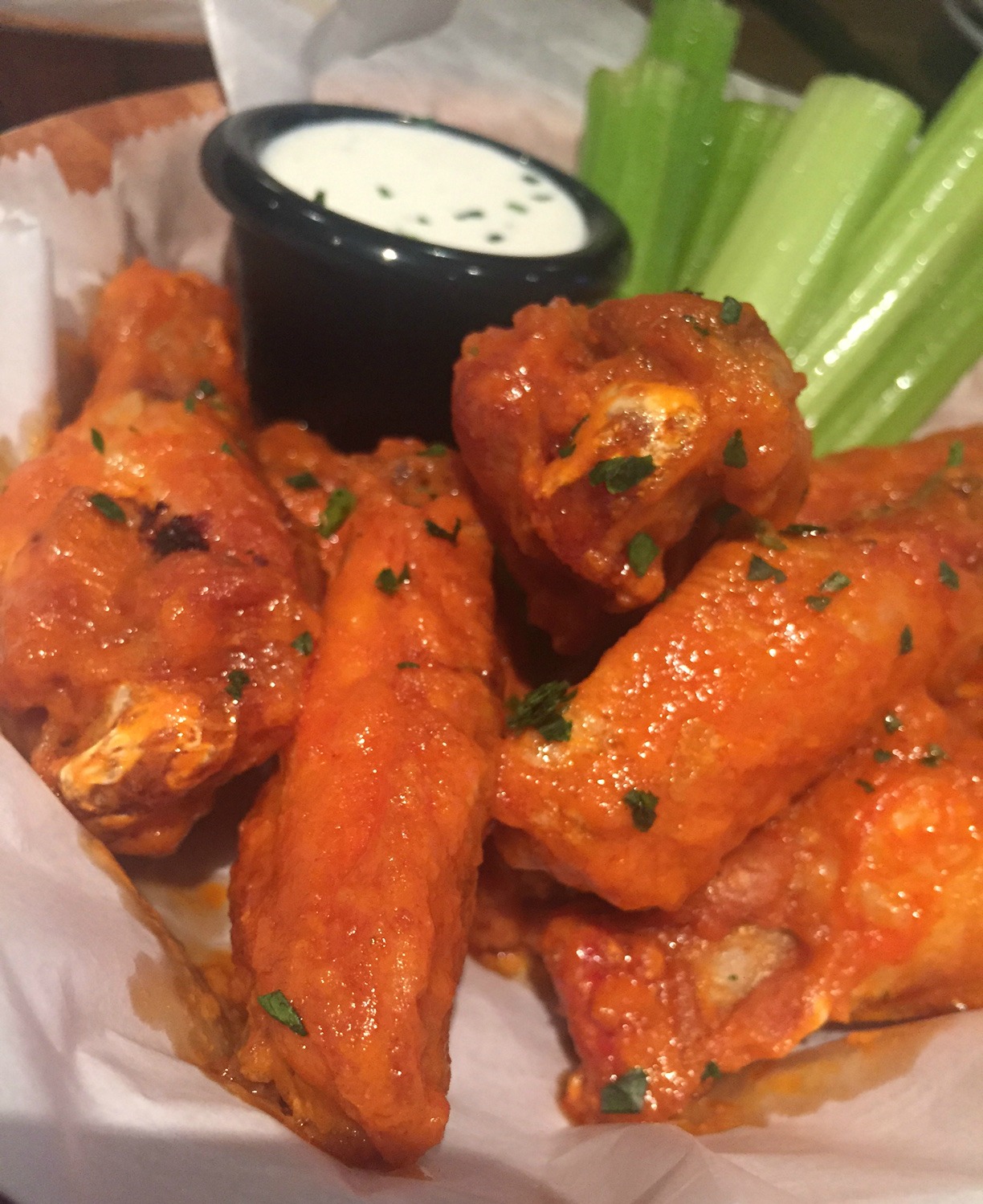 They also have wings in three flavors – these were buffalo and were a bit spicy for me – I’m a wussy mild girl but the rest of the table loved the spice. 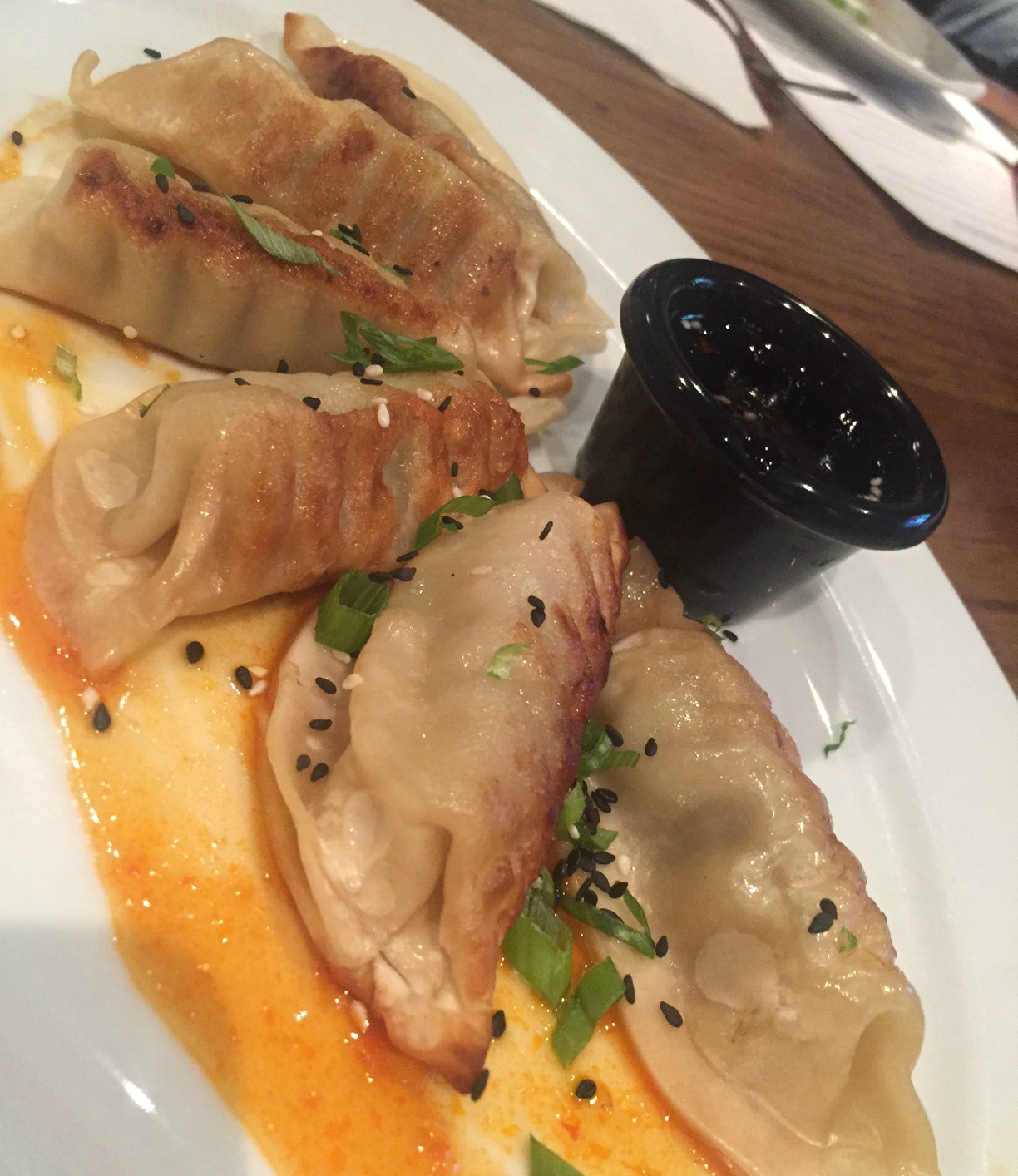 We tried Pork Potstickers as well that were pan seared and served with a sweet chili and ponzu sauce. These are fine but definitely my least favorite of the apps. 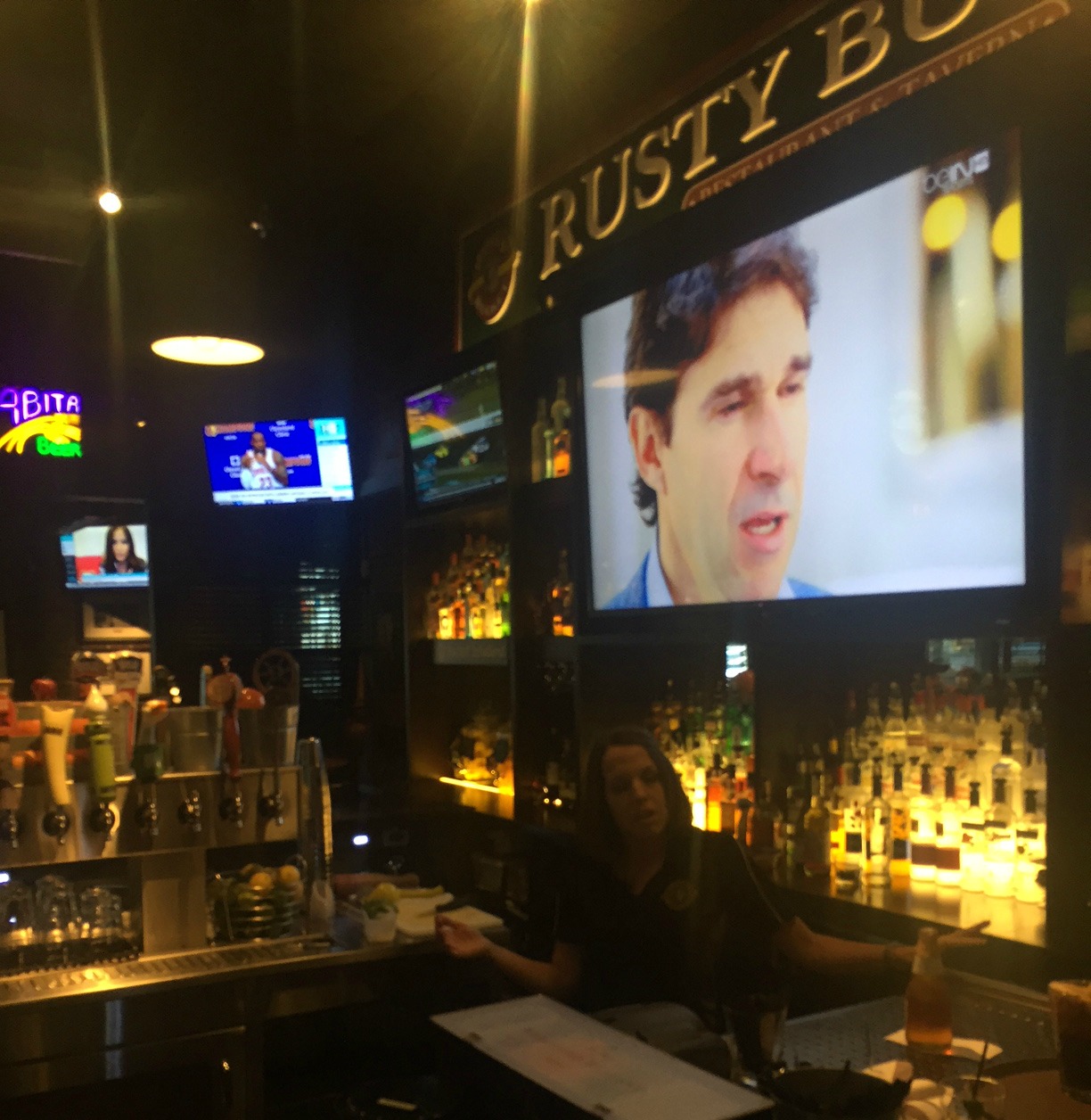 After getting some food in our bellies (smart idea) – they took us to the bar!! You really can’t go wrong with that! 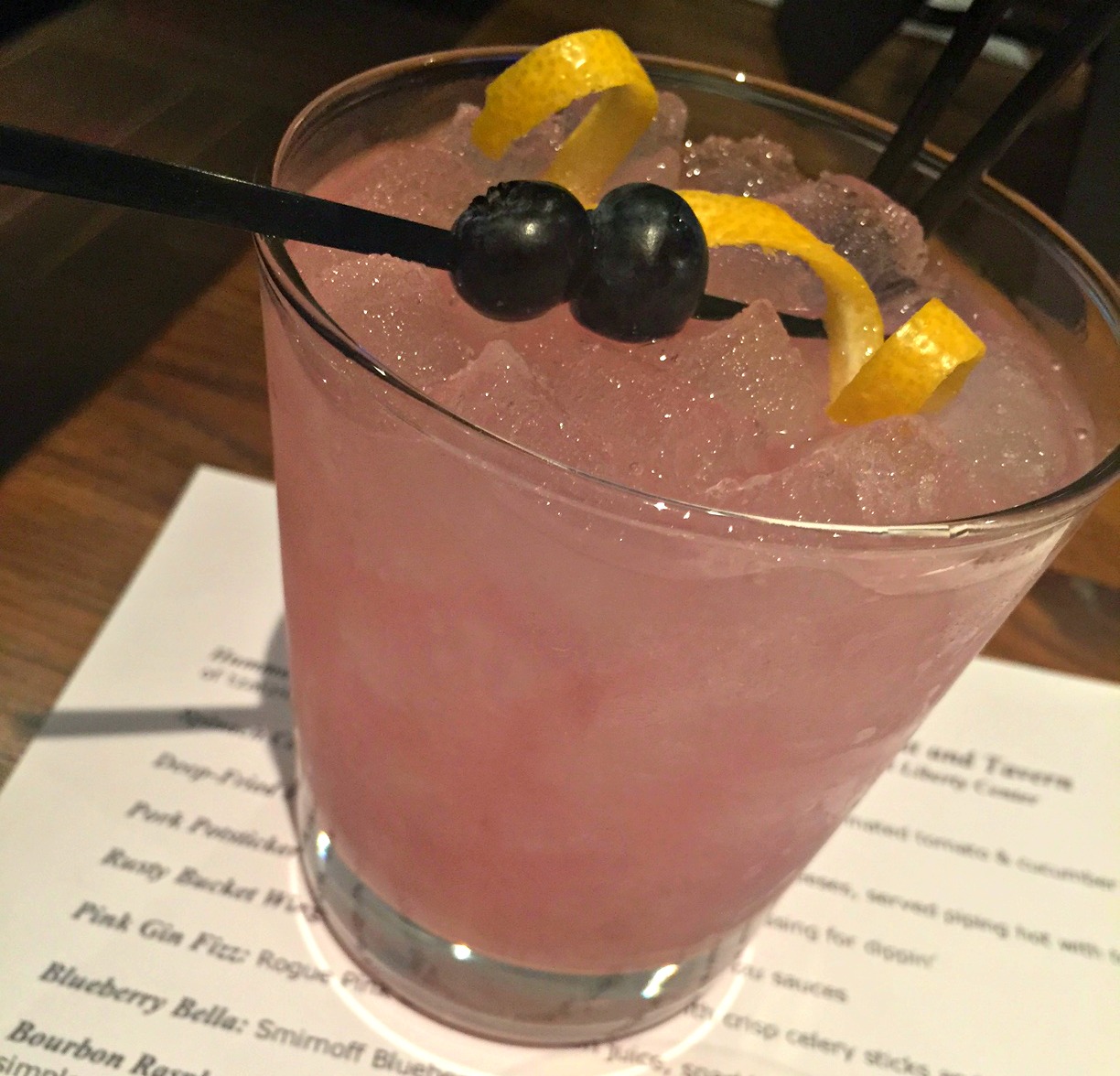 We got to try multiple signature drinks – the first was the Blueberry Bella – which had Blueberry Vodka, muddled blueberries and fresh lemon juice. It had good blueberry flavor but I’m not much of a drinker and the vodka was too much for me. 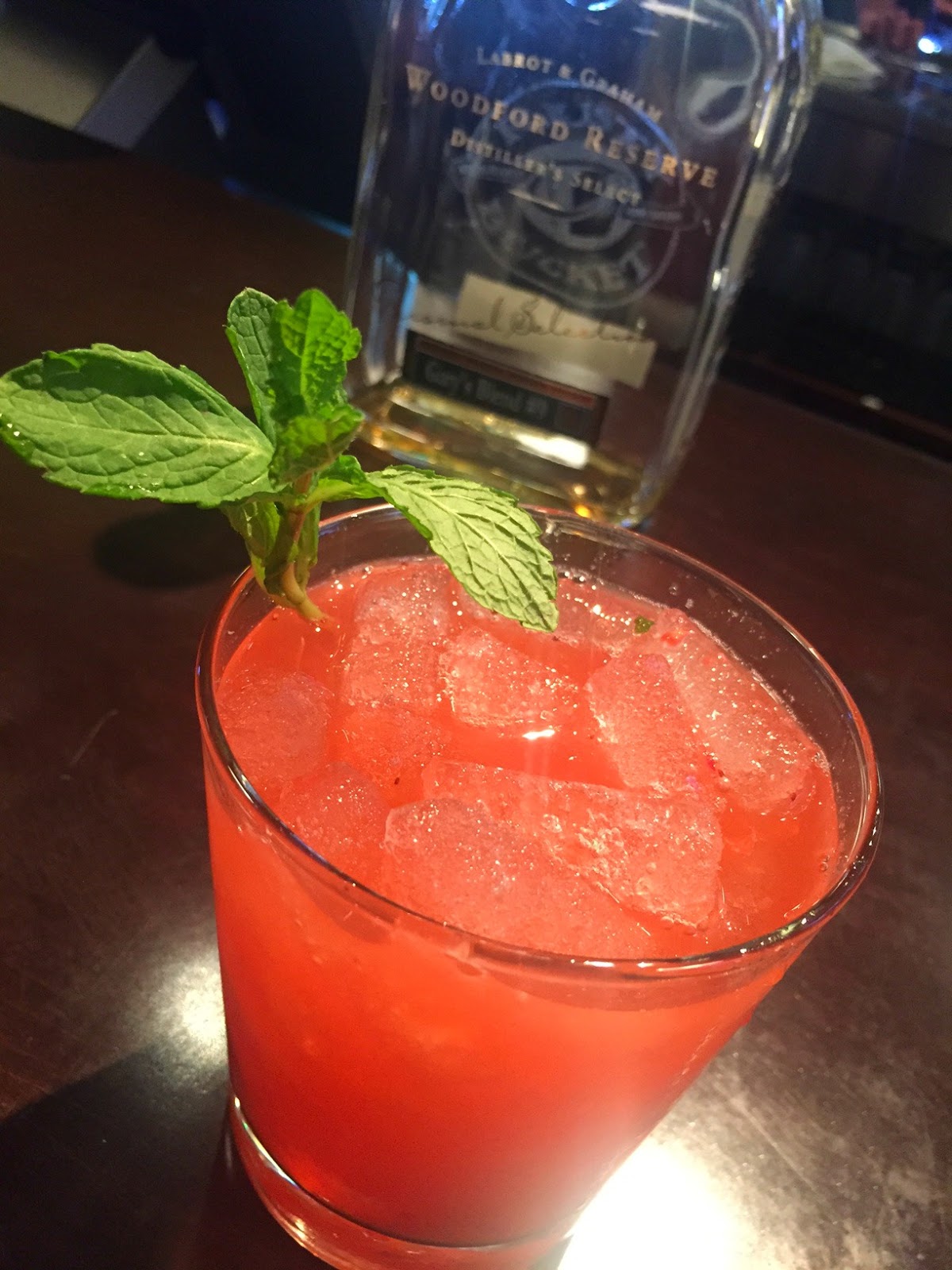 then we tried the Bourbon Raspberry Smash – with mint leaves, ripened raspberries and simple syrup – then mixed with lemon juice and strawberry puree. I think it’s called a smash because I was about to smash that drink!!  So good – and I hate bourbon. 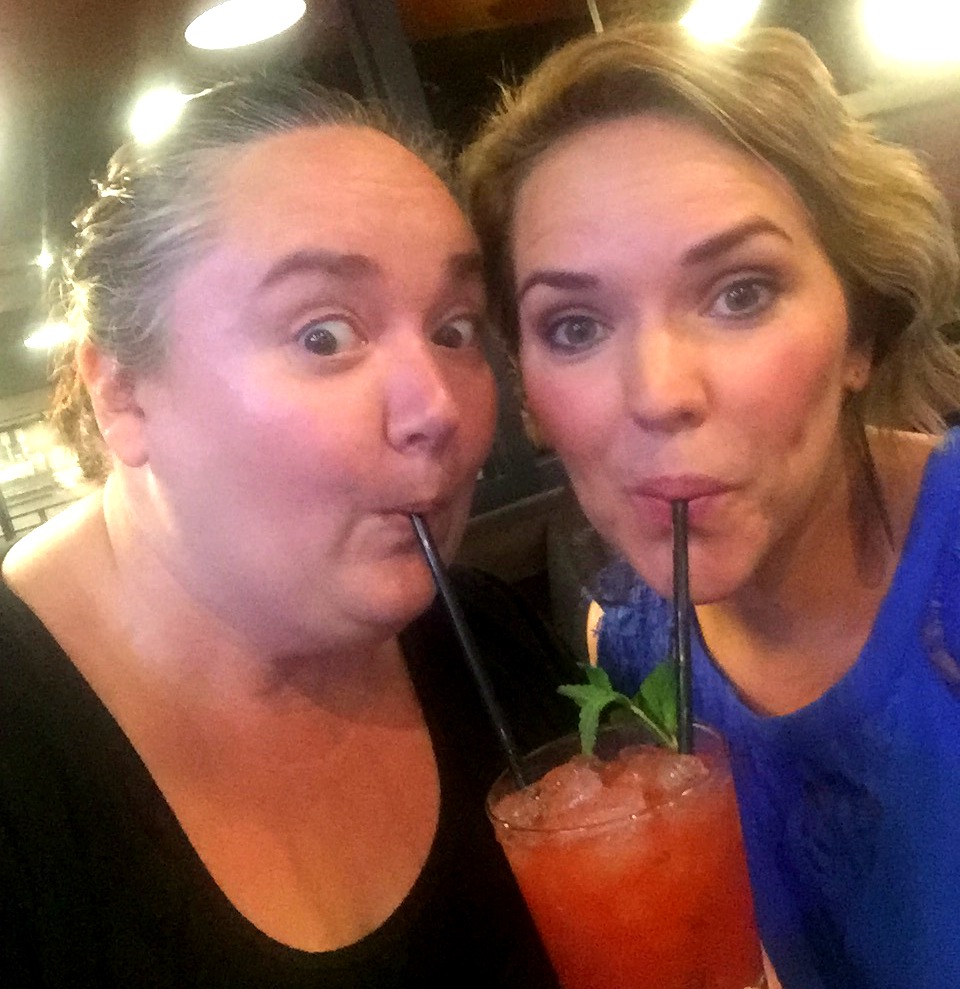 Of course – here’s me and my girl Jennie from Motherhood Support. She is a walking party – so I love getting together with this hussy! 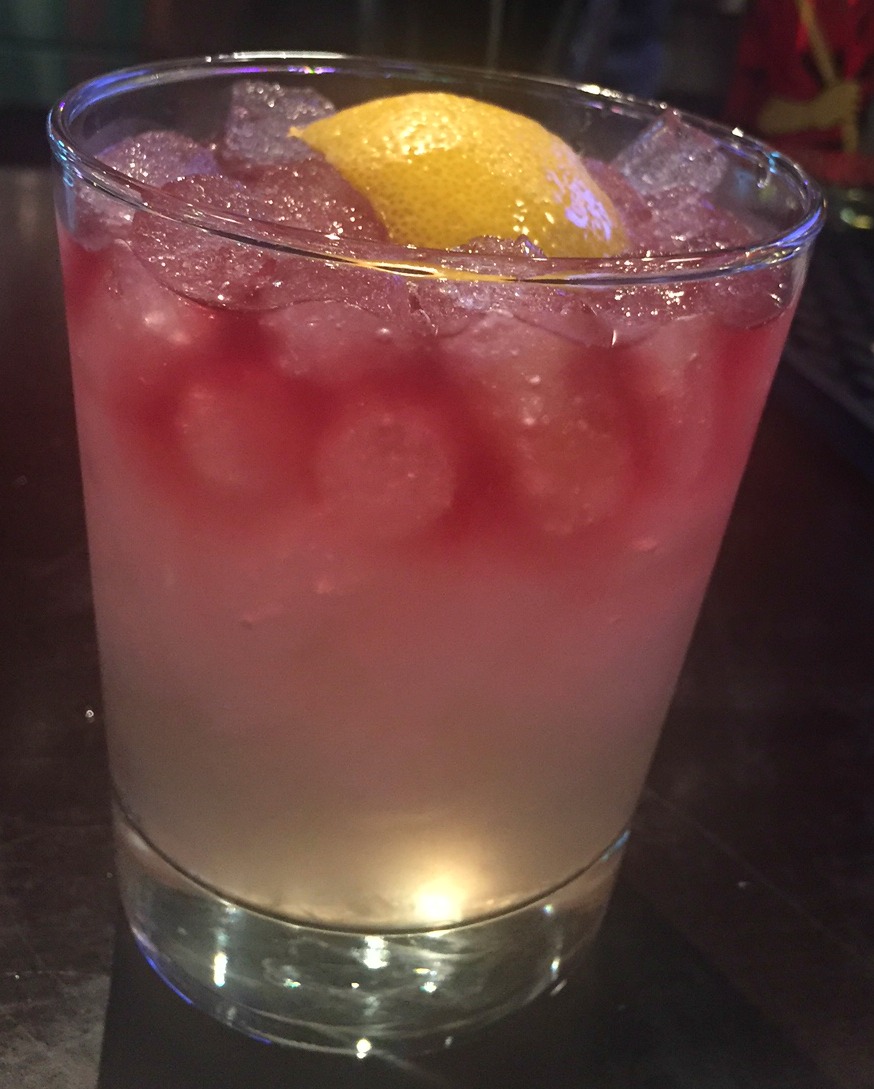 Next up was the Pink Gin Fizz with Rogue Pink Gin, fresh lemon juice, sparkling water and a Pinot Noir float. And yeah – it was great too. 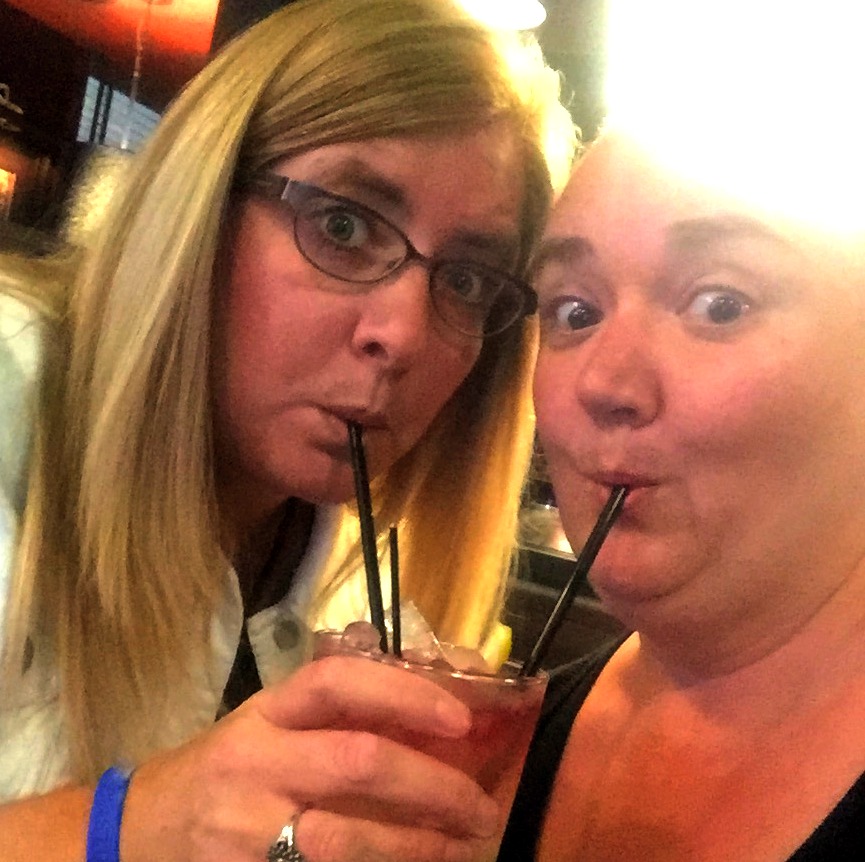 Kristin from Mason Me-Tu also helped me get my drinky drink on – we had to share so we didn’t all go home schmammered. 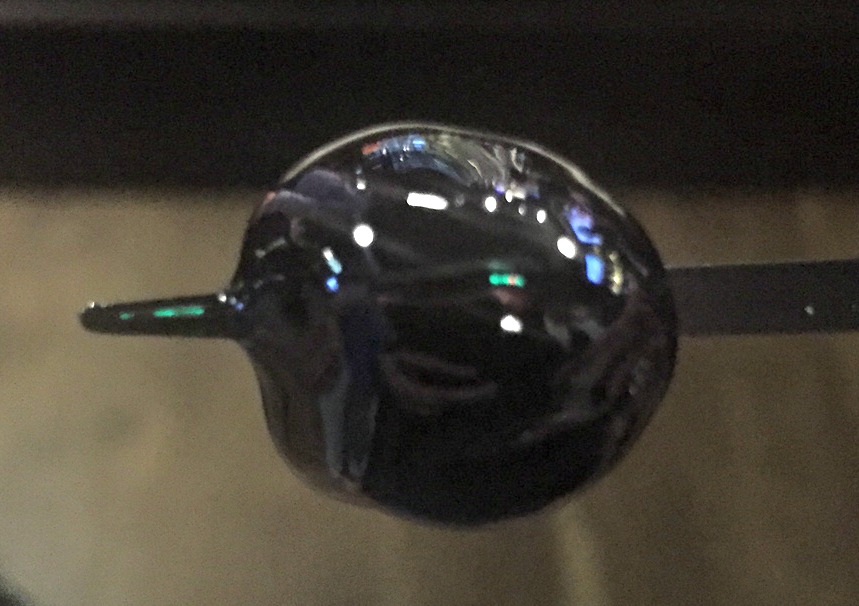 Then they introduced us to this wackadoo cherry – it’s really rich and syrupy and it’s some kind of Maraschino but not like the kind you put on ice cream. Whatever it is – it’s thick and tasty.

The bartenders here are great too – they hand make all their drinks and don’t cut corners anywhere. They also make their own Pineapple Vodka and more. It’s just one of many touches of personal customer service that you can see there. 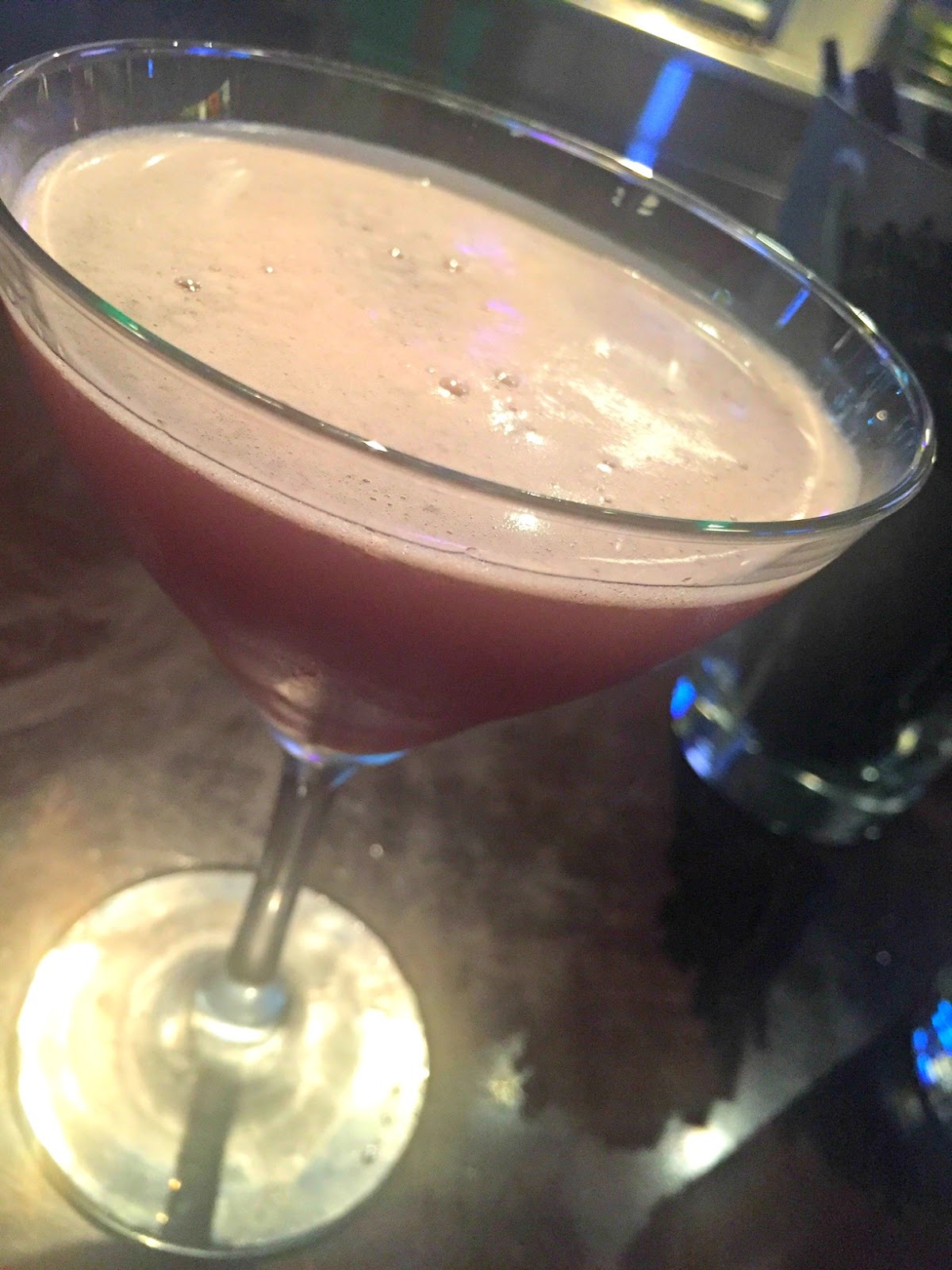 Then they made a special drink called The Hemmingway Daiquiri – it was my FAVORITE. I might have drank the whole thing. Not saying I did…but just saying maybe I did. 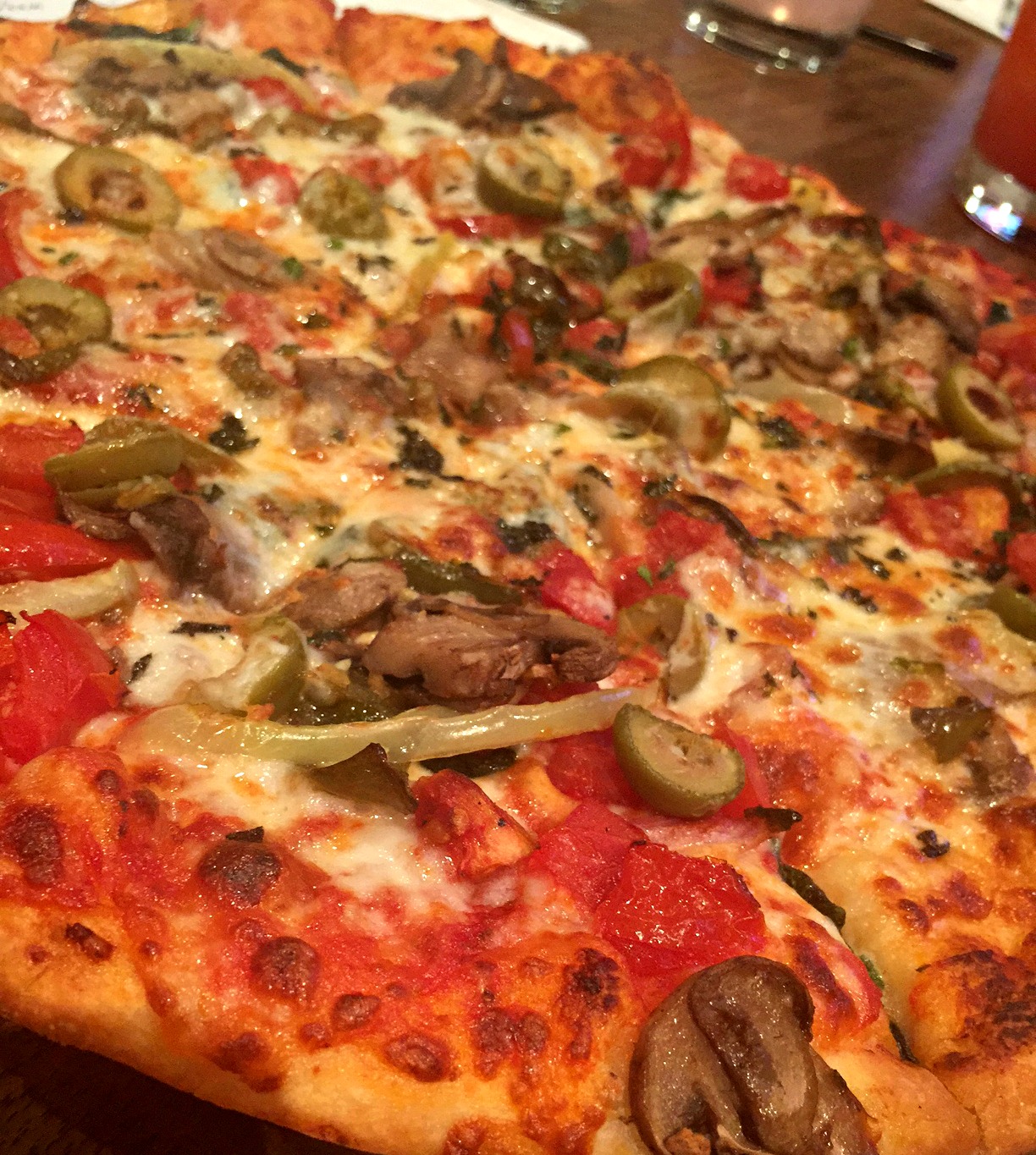 Now – onto the entrees – Veggie Pizza! This was loaded up with roasted tomatoes, mozzarella, provolone, mushrooms, bell peppers, red onion, banana peppers, green olives and spinach. It was really good pizza – I could have eaten a lot more but there was so much more to come. 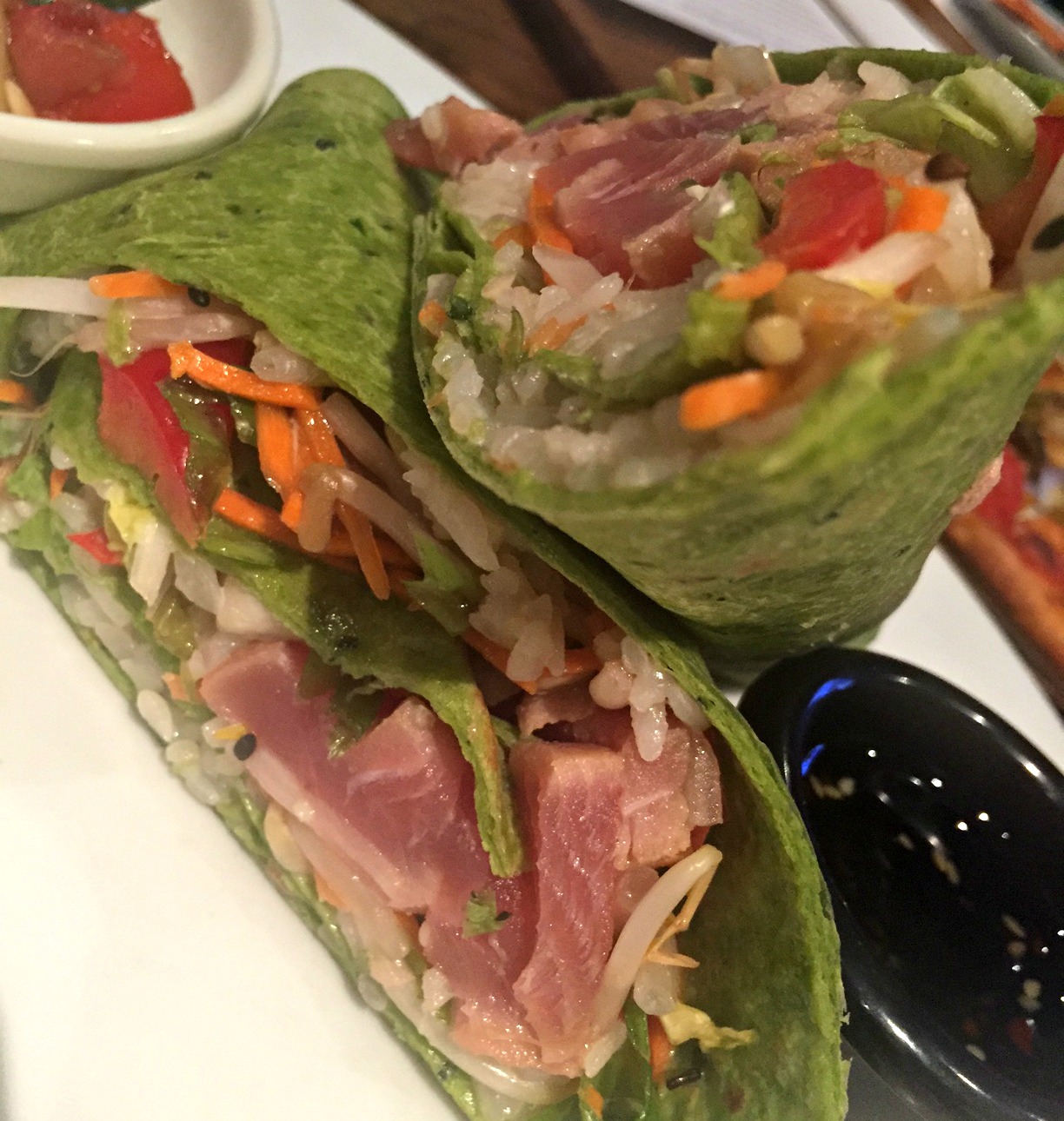 Then there was the Asian Tuna Wrap – soy marinated yellowfin tuna, seared rare with wasabi mayo, sticky rice and a veggie medley. I think everything else was so decadent this got overlooked a little. If you’re looking for something a little healthier – you might check this out. 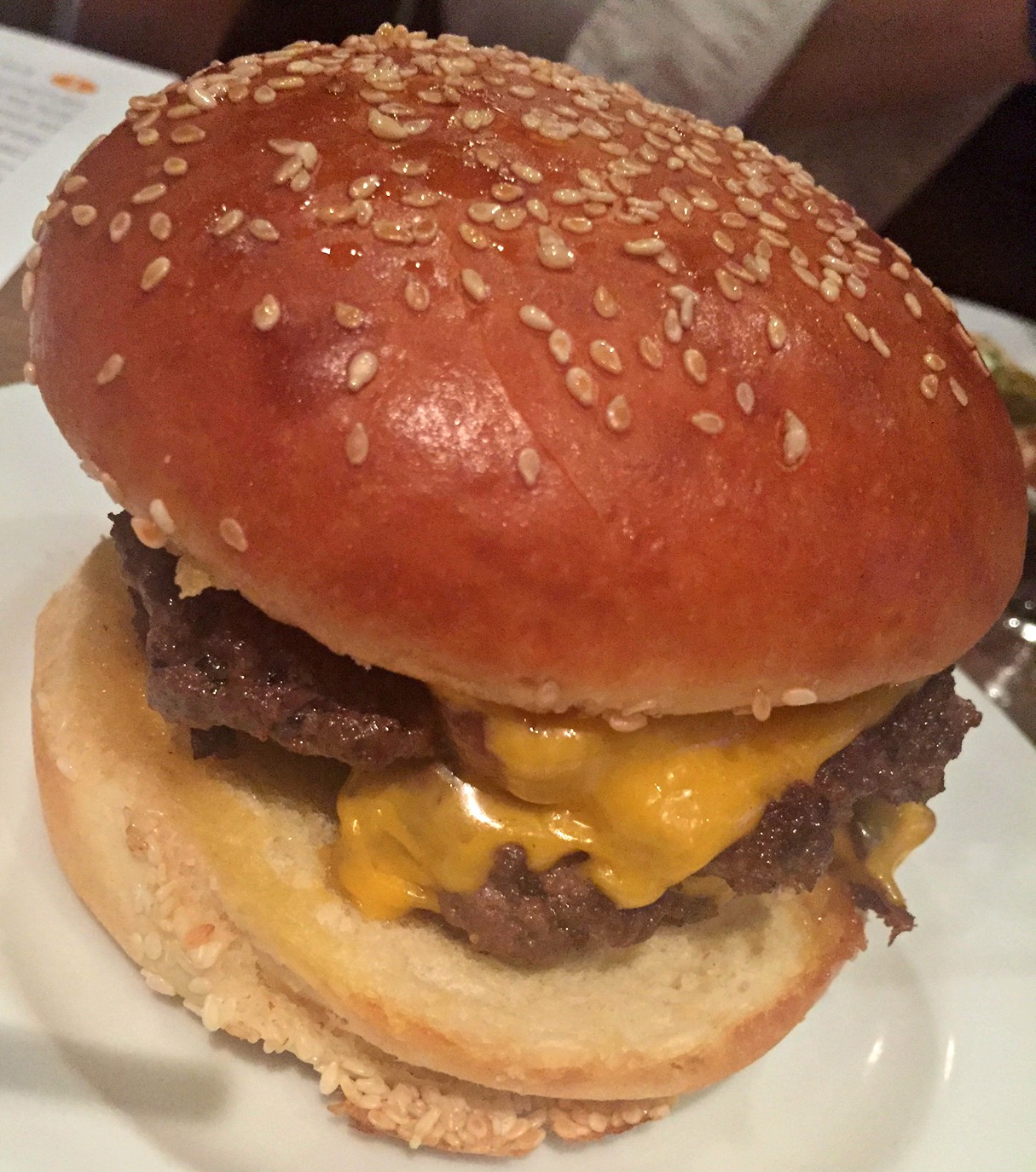 On the other end of the spectrum is the Juicy Lucy – this is a Happy Hour burger with two hand-made patties topped with caramelized onions and American cheese. 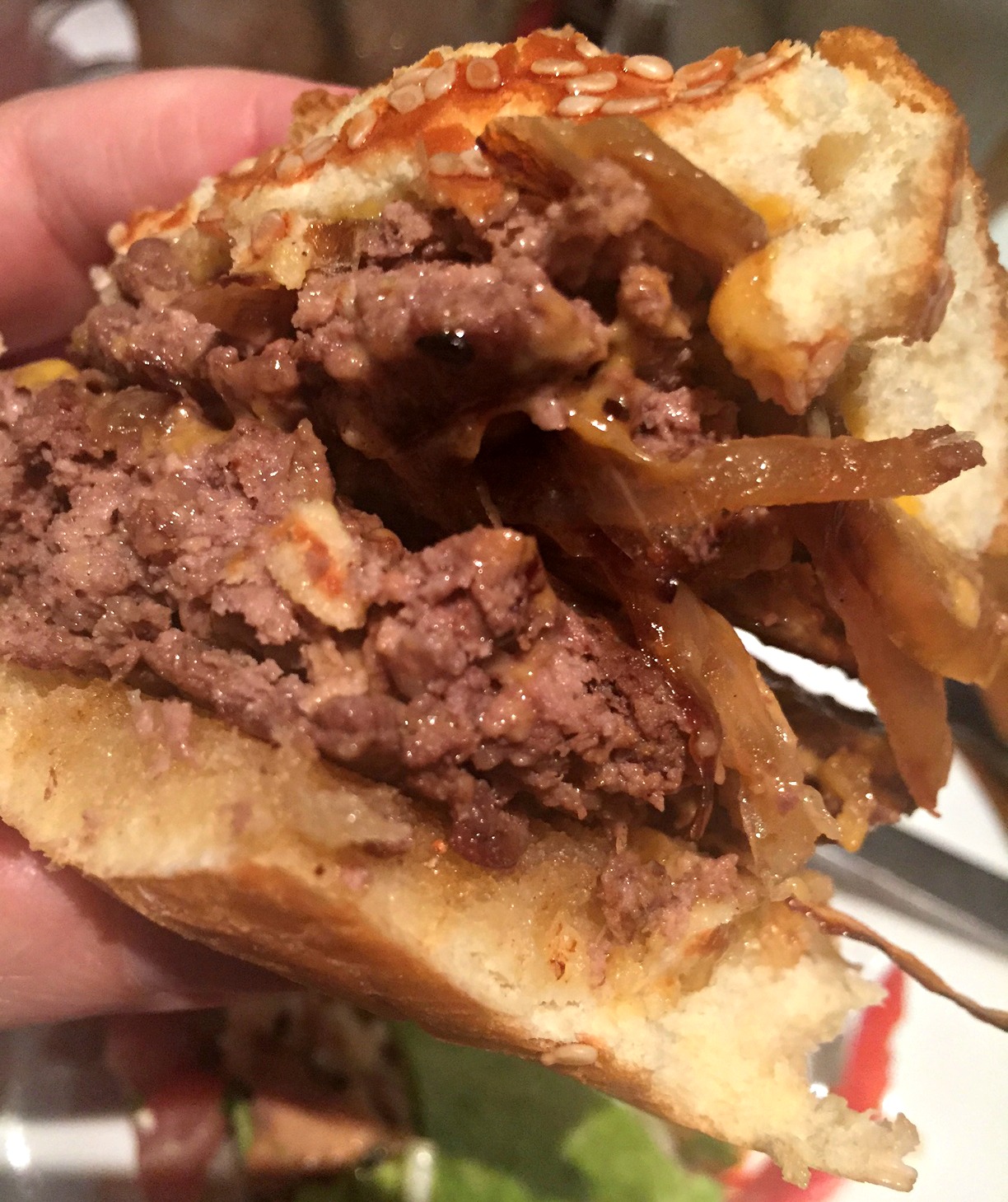 Everybody that took a bite of this burger LOVED IT! I mean – this is a fantastic burger!!!! We all loved it and I would honestly go back just for that burger.

Here’s another instance of the customer-focus that Rusty Bucket has. The manager came out and told us that while this is a “Happy Hour” burger – if you ask for it at another time – you can still get it. Basically – they are there for you – so if you have a special request – they’ll do everything they can to accommodate you. 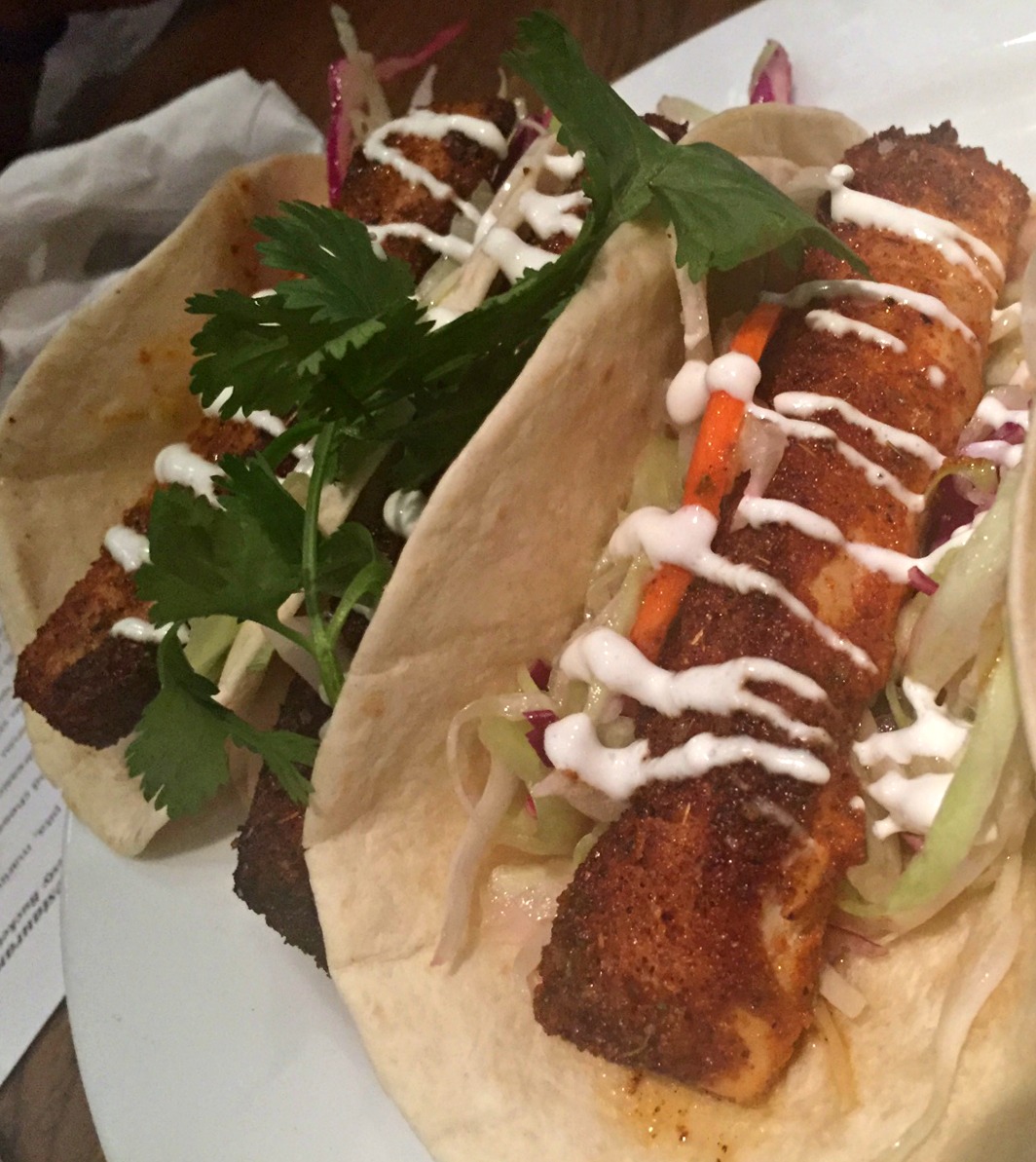 We also tried the Mahi Mahi Tacos – well we could have. I wasn’t too interested in trying them with all the other amazingness we had – but people seemed to enjoy them. They were served with cajun rice and beans. 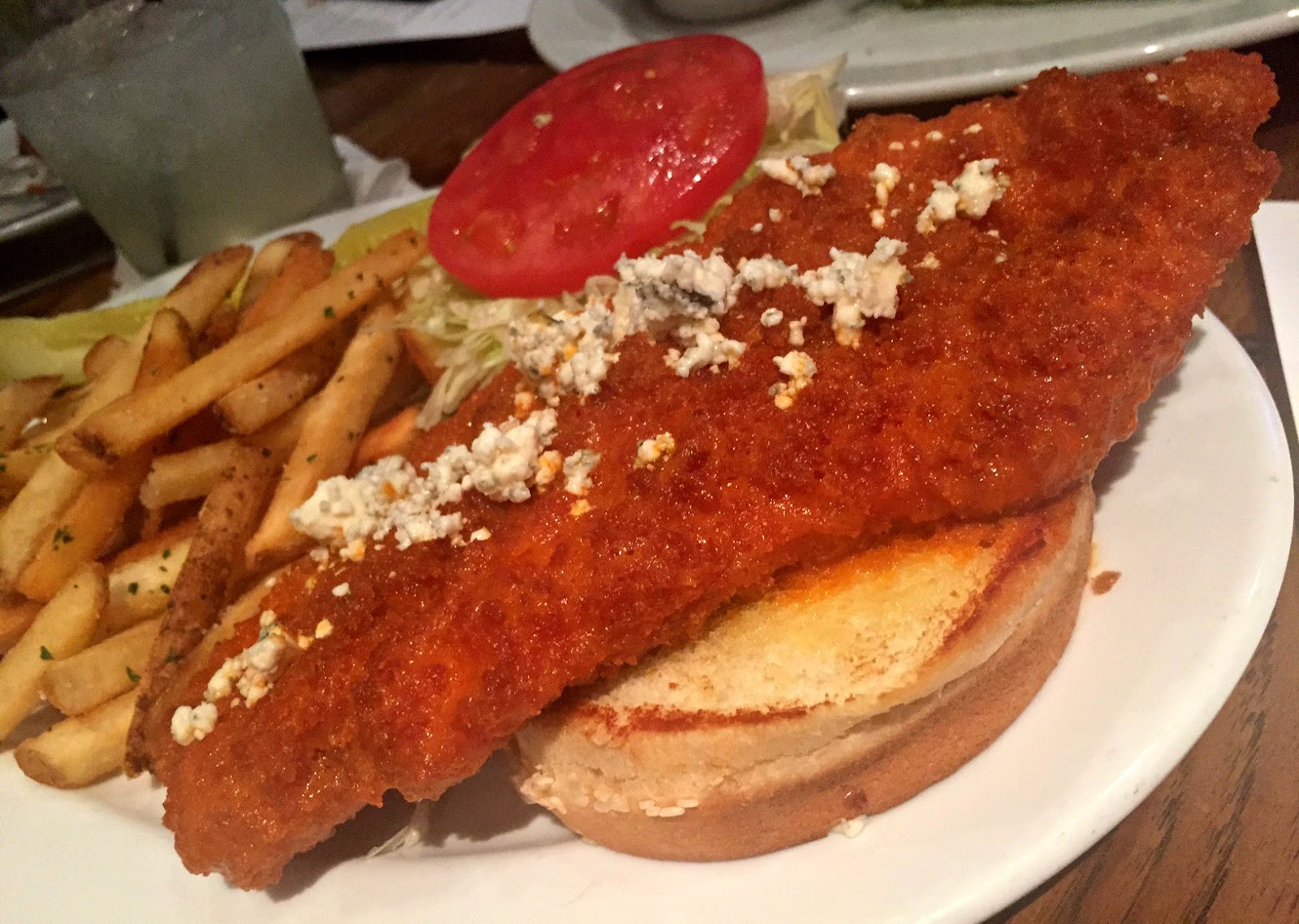 A staple from their menu that everyone raves about and all my friends order is the Buffalo Chicken Sandwich.Panko crusted and slathered in their “regular” sauce – topped with bleu cheese, lettuce, tomato and mayo. This is spicy but tasty. 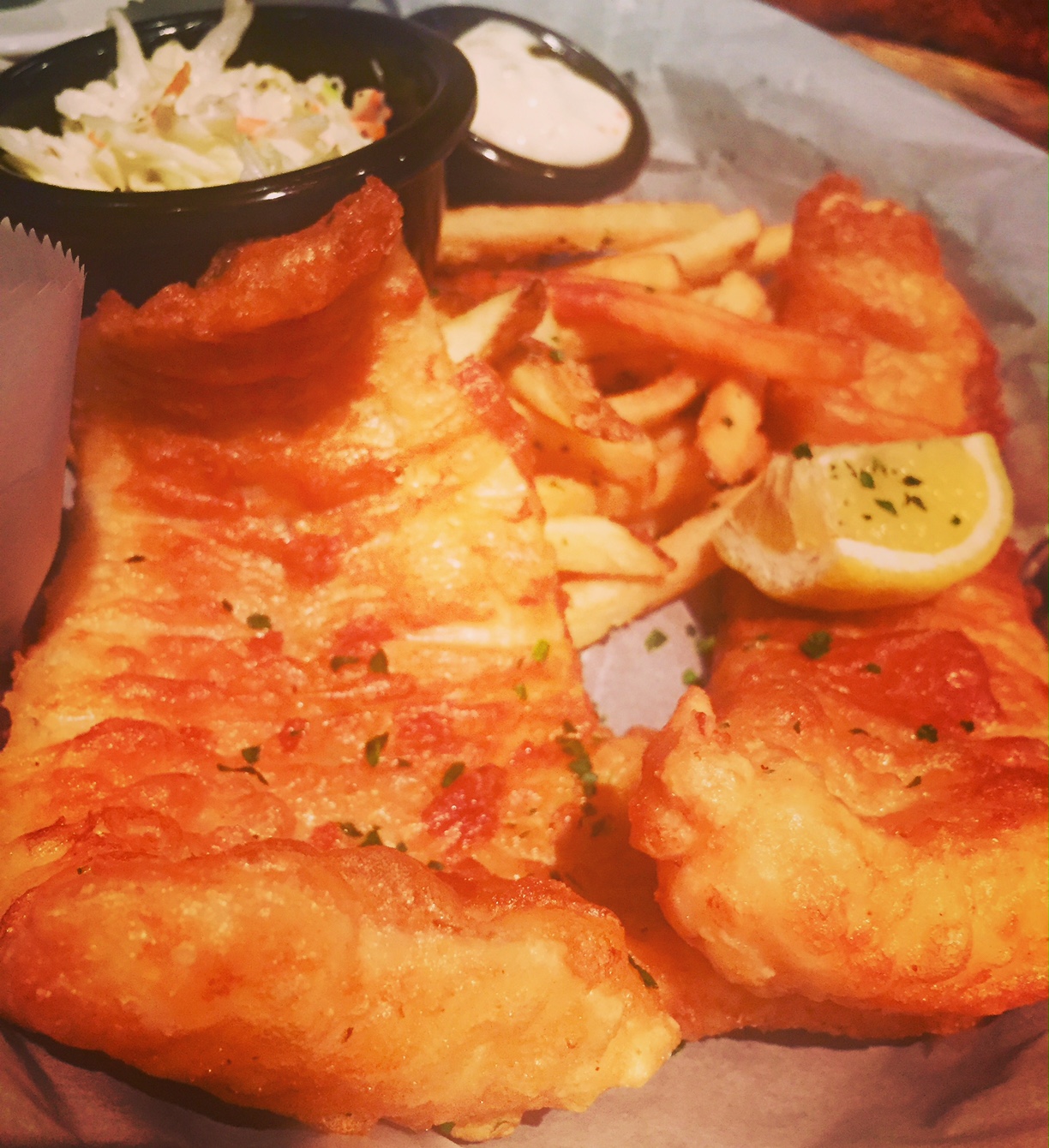 Close behind that burger for me is the Fish& Chips – beer battered cod and crispy french fries. I ate a giant piece of fish on my own and could have killed the other one too. So delicious. I hate breaded fish – battered is the only way I go and this was perfect! 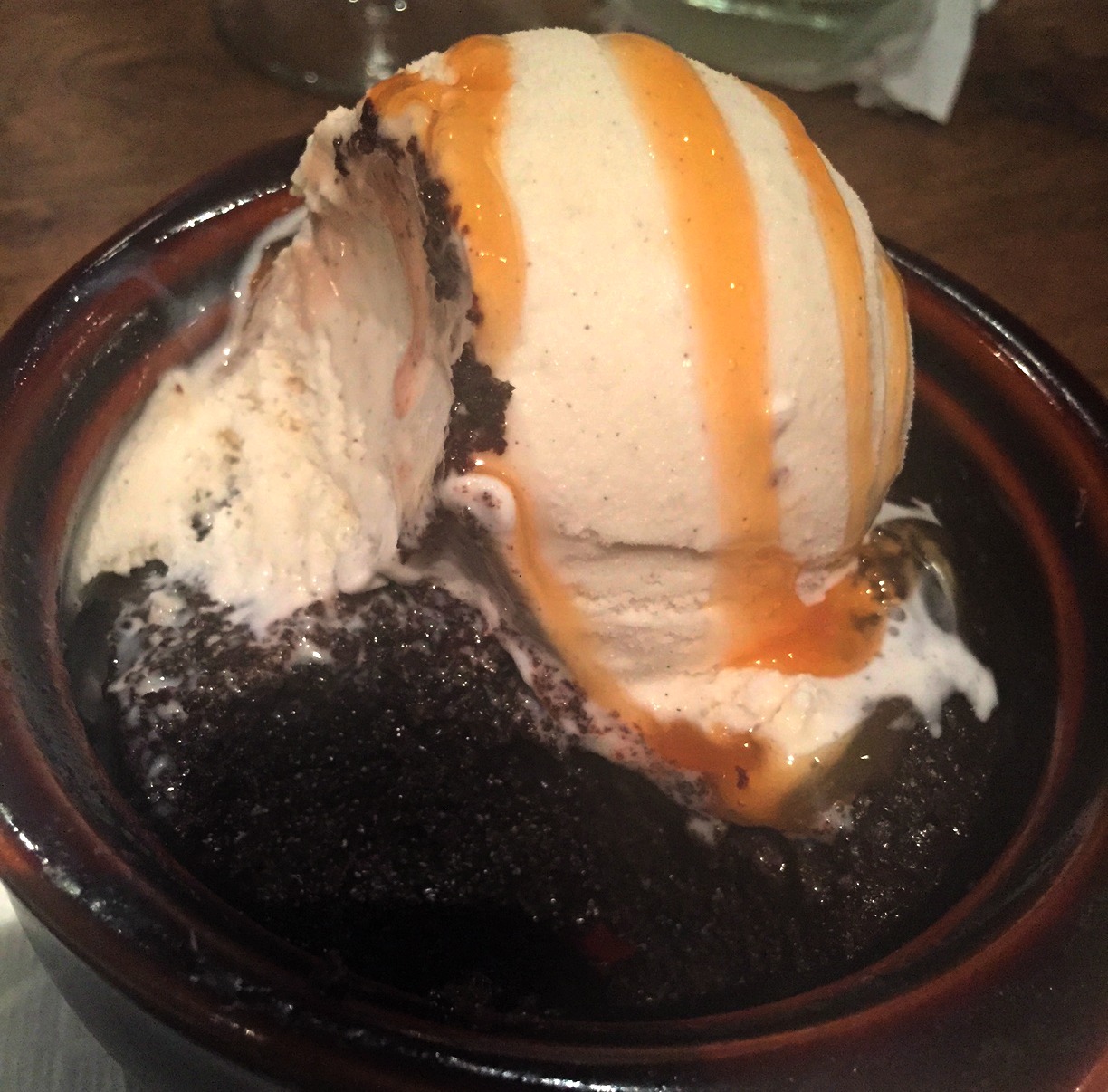 Then we ended with dessert – the Triple Chocolate Cake was perfection – like seriously – perfection. I think I ate most of this. There were a few on the table and everybody else was full but I have that special dessert pocket so I was able to store it there. 🙂 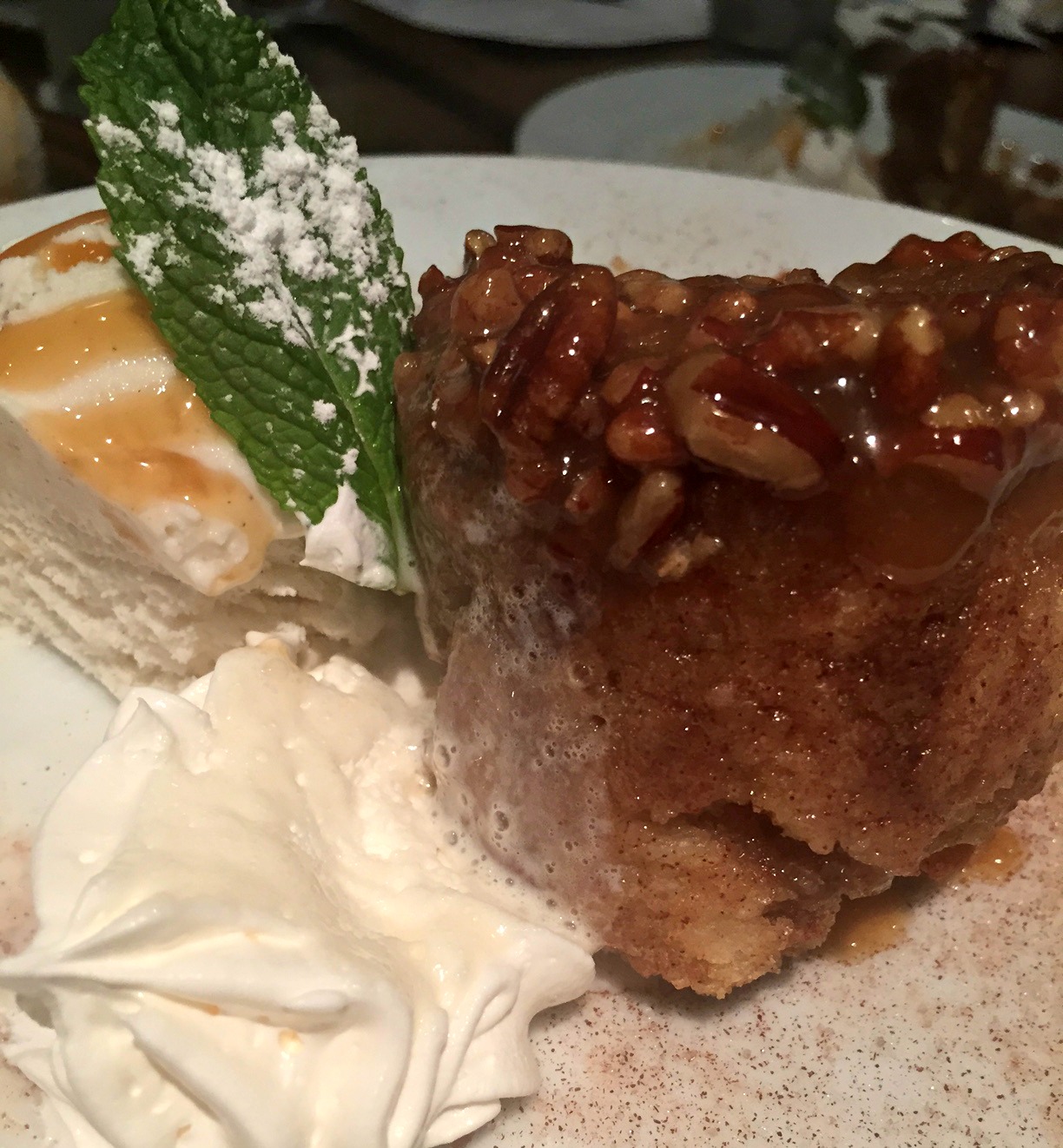 They also served Sticky Bun Bread Pudding which everybody else enjoyed – but I was too obsessed with the chocolate cake.

Why Should You Go? It’s a great restaurant with so many delicious dishes and they put customers first – as well as employees. They had a couple of employees chat with us too and they couldn’t say enough wonderful things about the Rusty Bucket. They are accommodating and really want their employees to grow. It’s great to find places like that. They’re based out of Columbus so while they are a “chain” it’s locally-owned and operated.