A few weeks ago I was invited to enjoy brunch at Seasons 52 on the house! 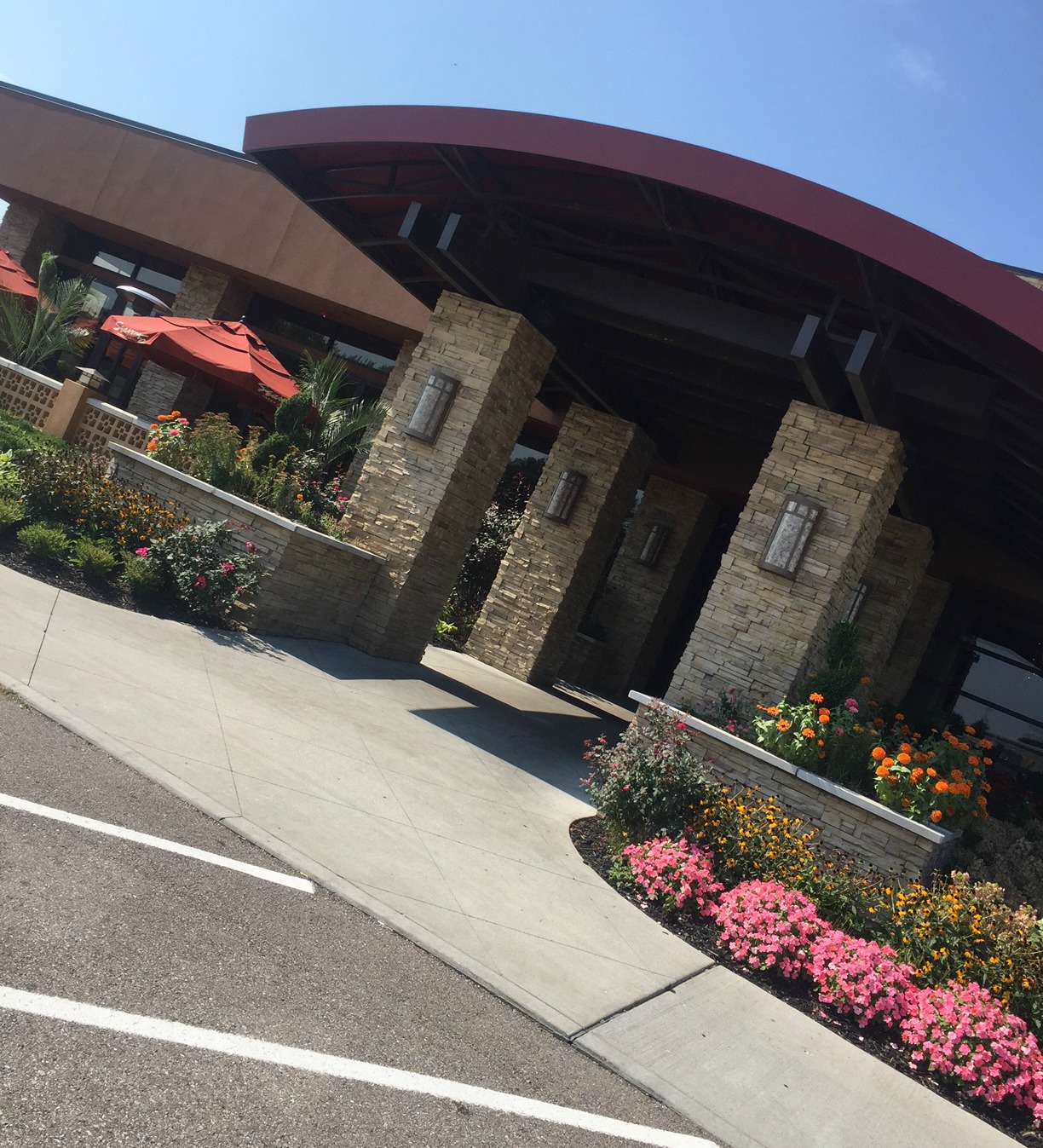 By then – we were starving – so off to Seasons 52 we went! Seasons is located across from Rookwood Plaza and is next to Capital Grille. 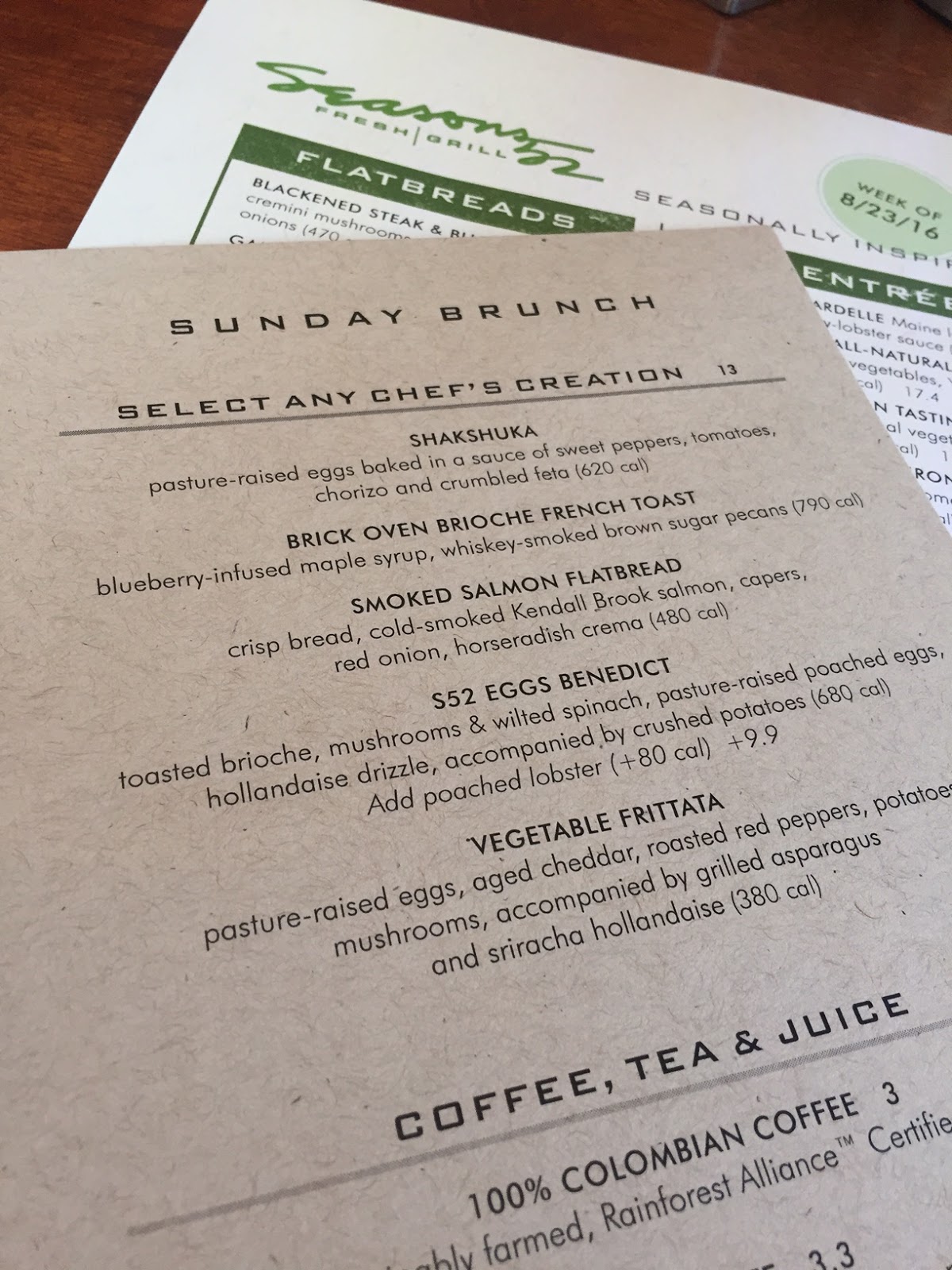 Seasons 52 specializes in fresh seasonal menus that are healthy as well. The calories are always listed with each item and you can definitely find some great options. The brunch menu is pretty-droolworthy. 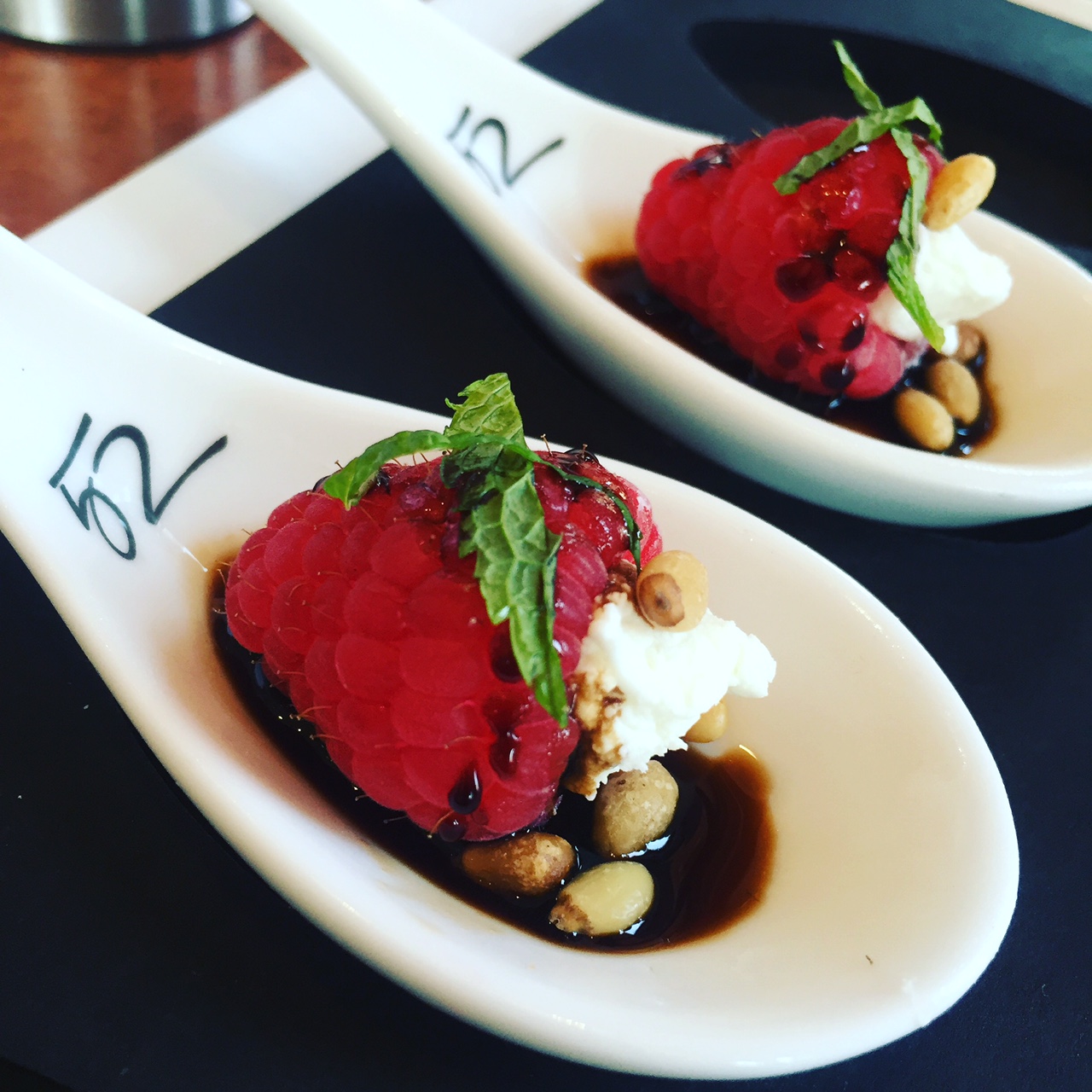 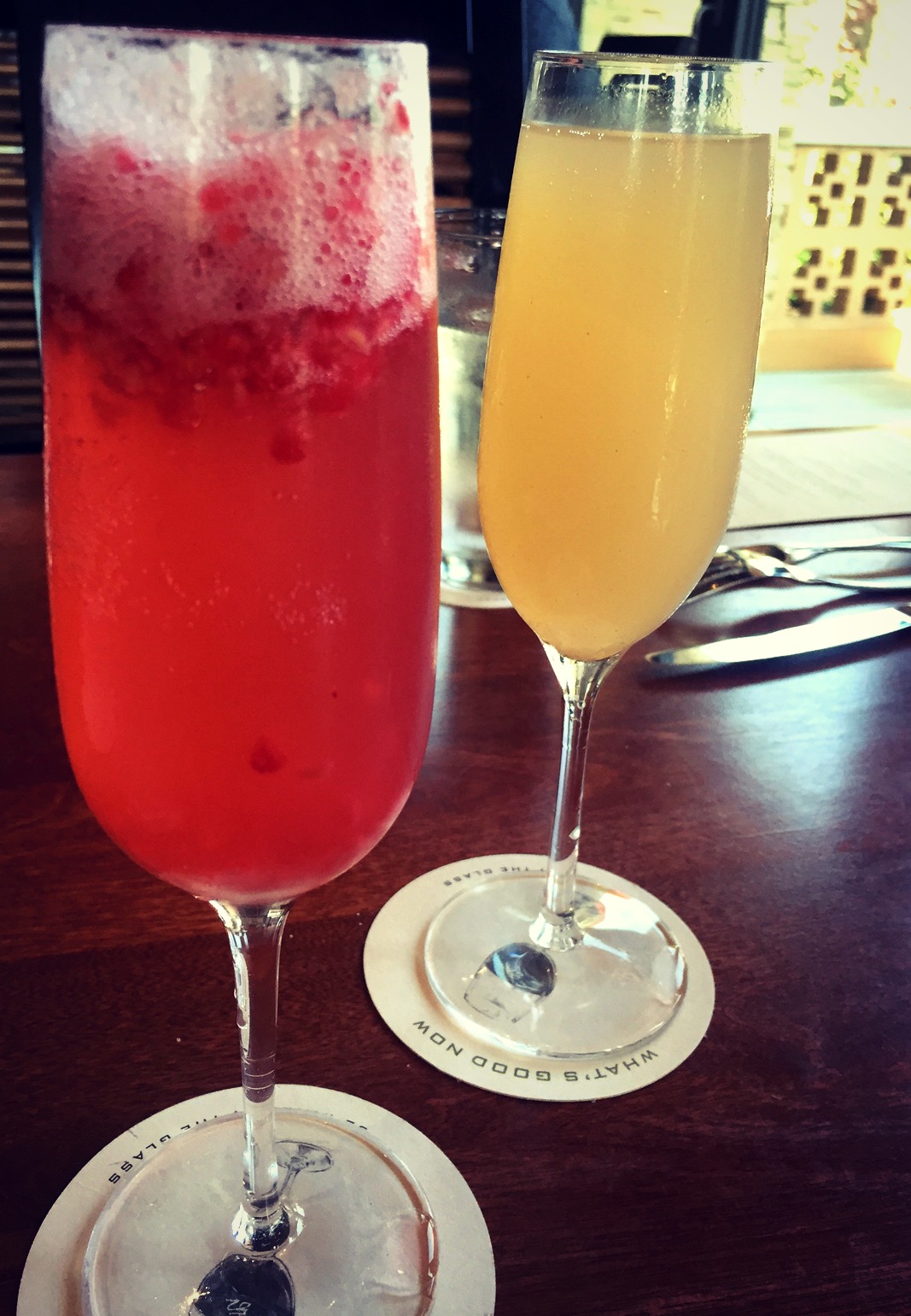 Neither Dawn or I are much for drinking but we decided to try their Prosecco Bellinis ($10.50). They come in white peach (170 cal) or raspberry (180 cal). The raspberry one was rather difficult to drink because of all the fruit pieces in it but it was tasty – Dawn liked her white peach as well. 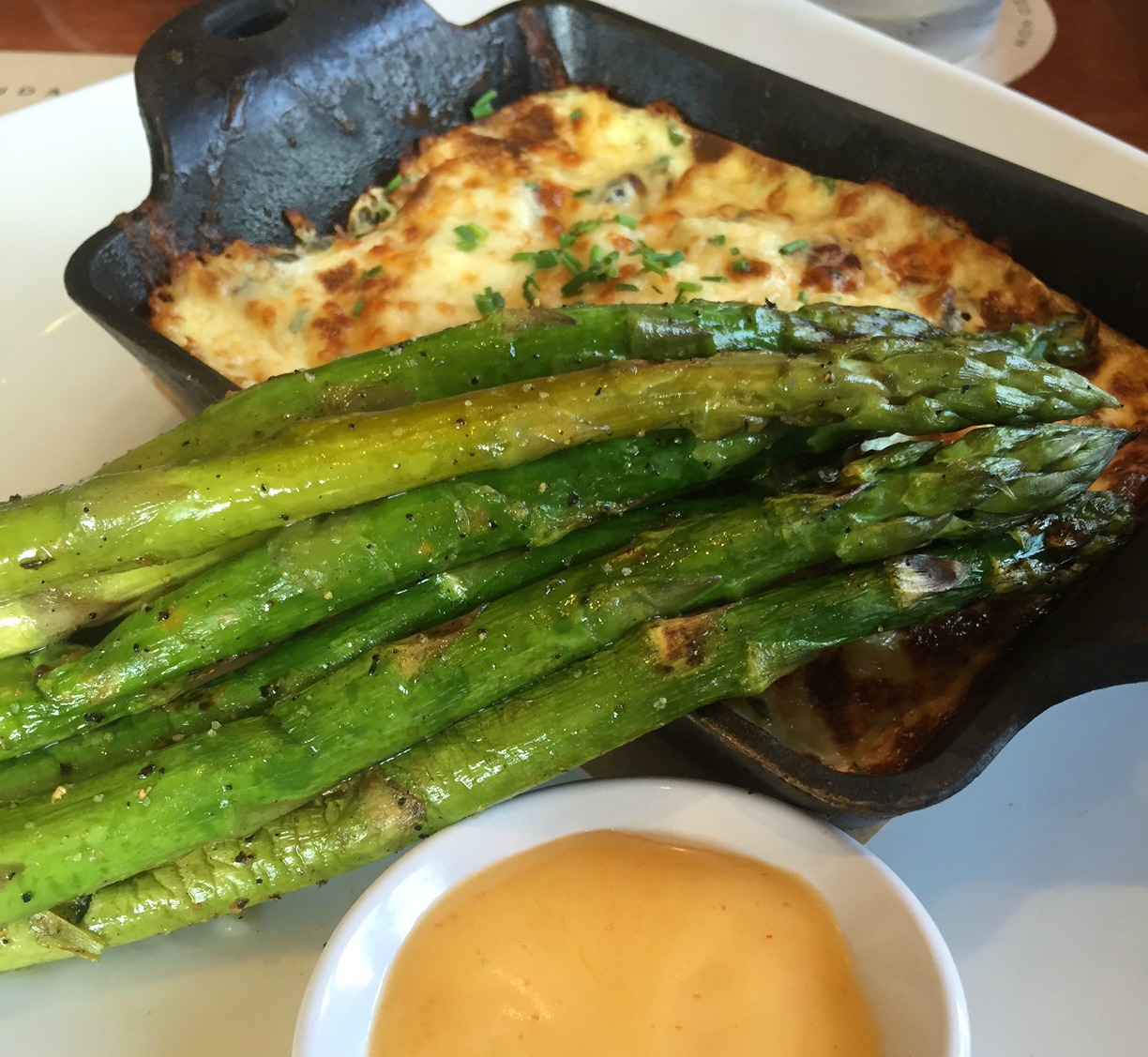 Then – the eating began. Oh my – they brought us EVERYTHING on their brunch menu. Holy.

First up – the Vegetable Frittata ($13 – 380 cal). It’s eggs, aged cheddar, roasted red peppers & potatoes and mushrooms with a side of grilled asparagus and sriracha hollandaise.

This was really great and especially when you see it’s only 380 calories! I tried a dab of the hollandaise but it was great without it. This dish ended up getting put on the back burner because of the other amazing items – but we both really enjoyed it. When I head back – it might be my choice just because of how low calorie it is combined with the amount of flavor it packs! Really great choice! 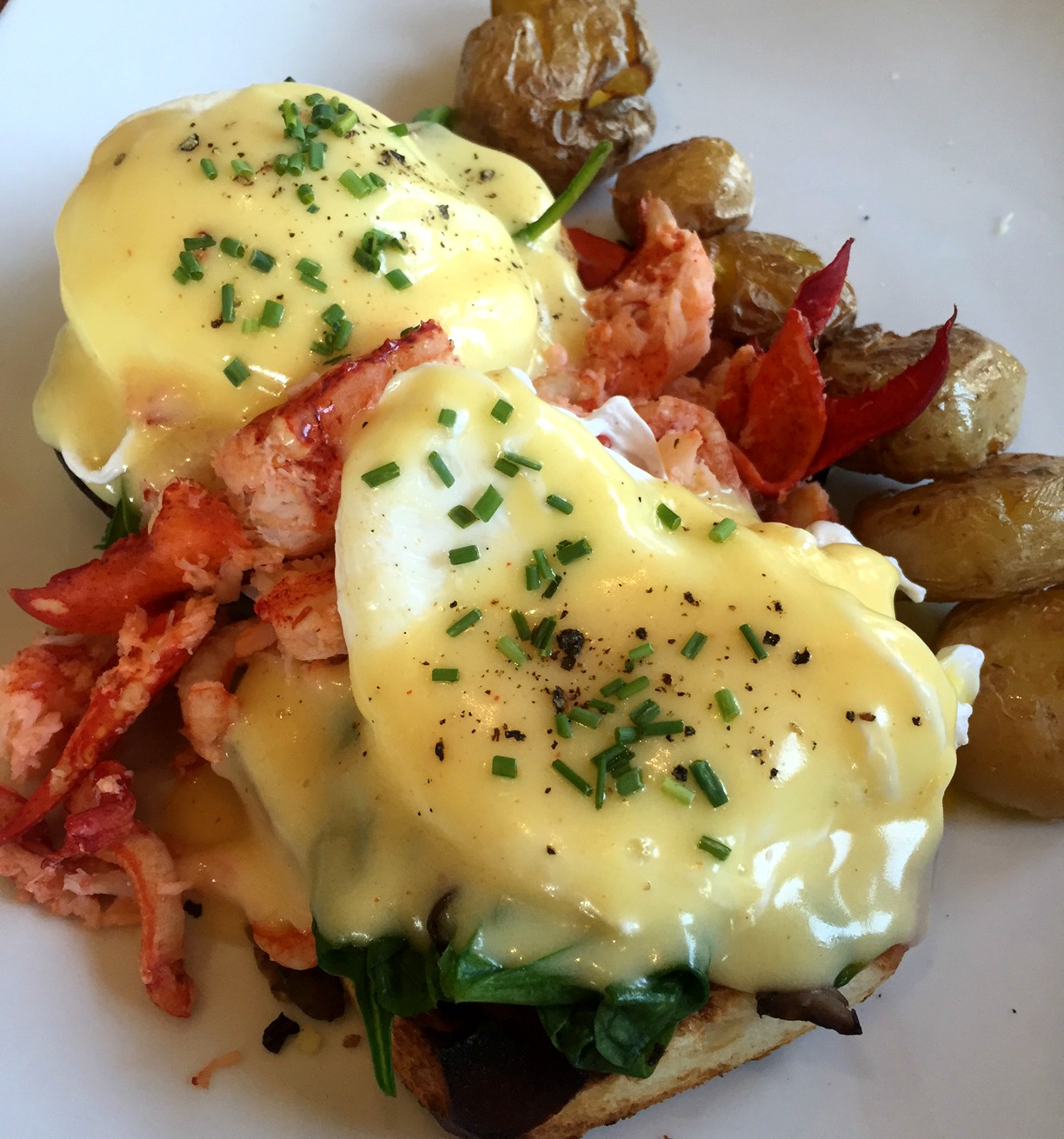 But here’s the thing – it’s hard to devour the frittata when you have Lobster Eggs Benedict staring you in the face ($22.90 – 760 cal). It’s expensive but oh mama – it’s worth it. Dawn and I practically stabbed each others hands getting to it first!
Toasted brioche, mushrooms and wilted spinach – topped with poached eggs, hollandaise and crush potatoes. Oh and poached lobster.
This was simply amazing and decadent. I could have EASILY eaten the whole thing – probably twice but I let Dawn have half. I can’t say enough – I didn’t even come up for air on this one – no words either – just moans along the way. 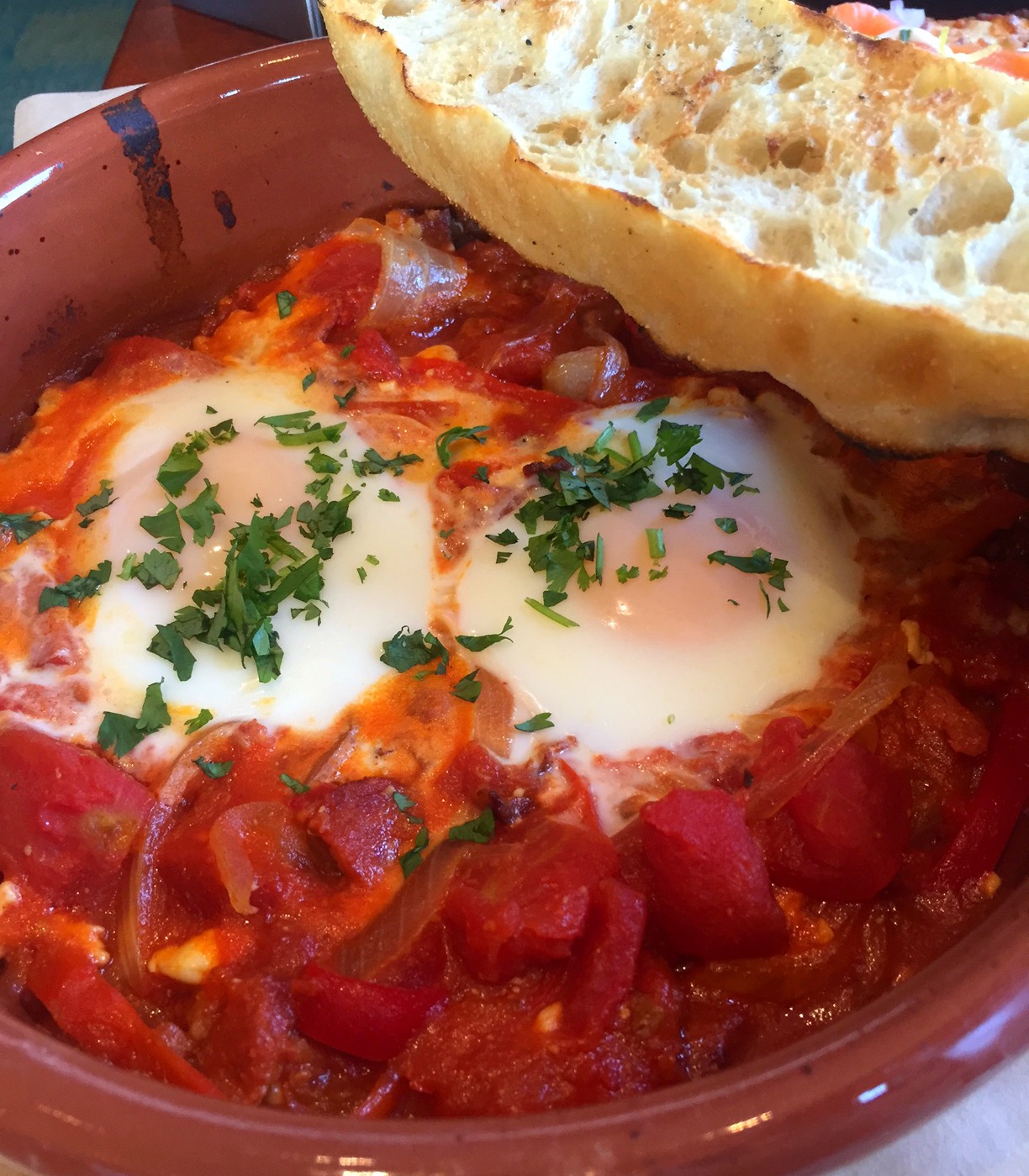 I had Shakshuka once before at a charity event and it was my favorite dish – I was very excited to see if that would repeat itself here.
Shakshuka is eggs baked in a sauce of sweet peppers, tomatoes, chorizo and crumbled feta ($13 – 620 cal).  The server said she wasn’t a chorizo fan so she didn’t care for it much but I have to disagree completely – this was really great! And I’ll say – the chorizo isn’t that spicy or anything. I found this dish very different from everything else and a welcome change – it was such different flavors – I loved it! 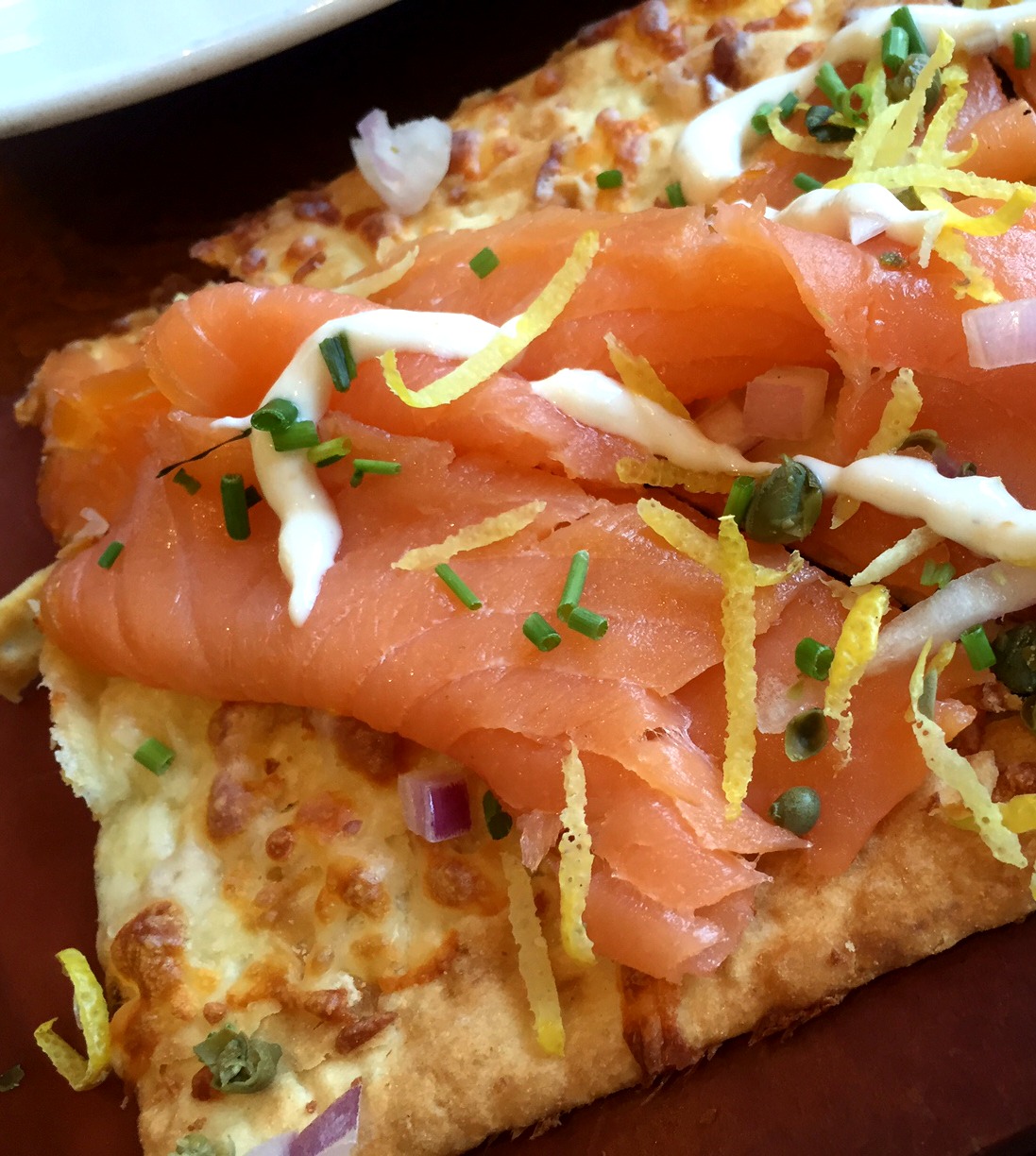 Seasons 52 is also known for their flatbreads and they are typically delish as well. We had a Smoked Salmon Flatbread ($13 – 480 cal). It had cold-smoked Kendall Brook salmon, capers, red onion and a horseradish crema. This was good and we both had a piece or two but all in all – probably our least favorite. It’s good – but I wouldn’t want to have just this as my entree – I think it’s a great starter for a group though. 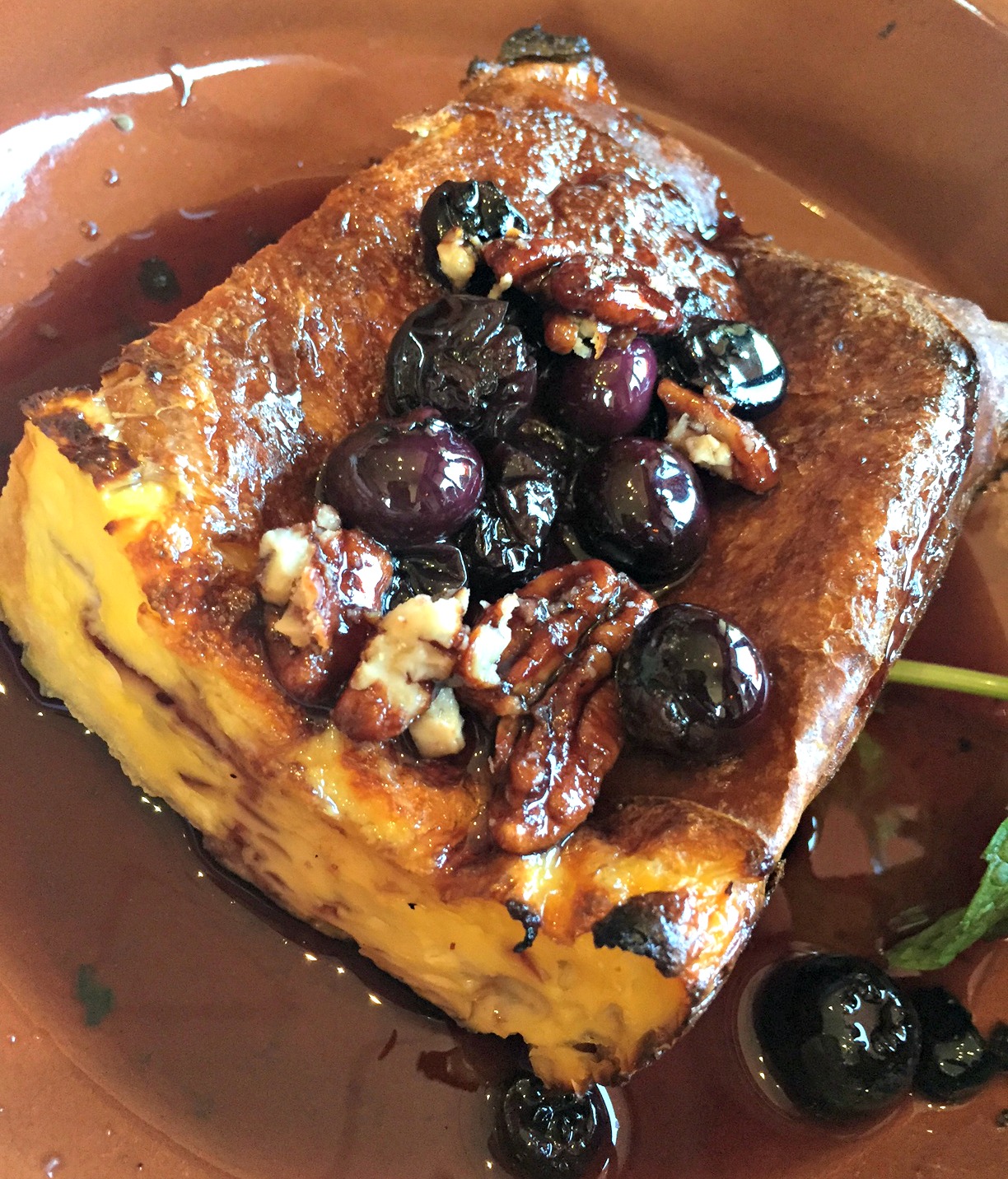 Then we finally dug into the Brick Oven Brioche French Toast ($13 – 790 cal) – not surprisingly the highest calorie dish. The French Toast is topped with blueberry-infused maple syrup and whiskey-smoked brown sugar pecan.

This was the servers favorite and they said probably the most ordered item. Dawn loved it. I liked it – I didn’t think it was as good as the lobster. It’s decadent for sure but I felt a little under done and sort of one-note. It was very eggy…which is fine. It was good – I just didn’t fall in love with it. You definitely wouldn’t be disappointed ordering it – but I personally enjoyed the Shakshuka and the Lobster Eggs Benedict more… 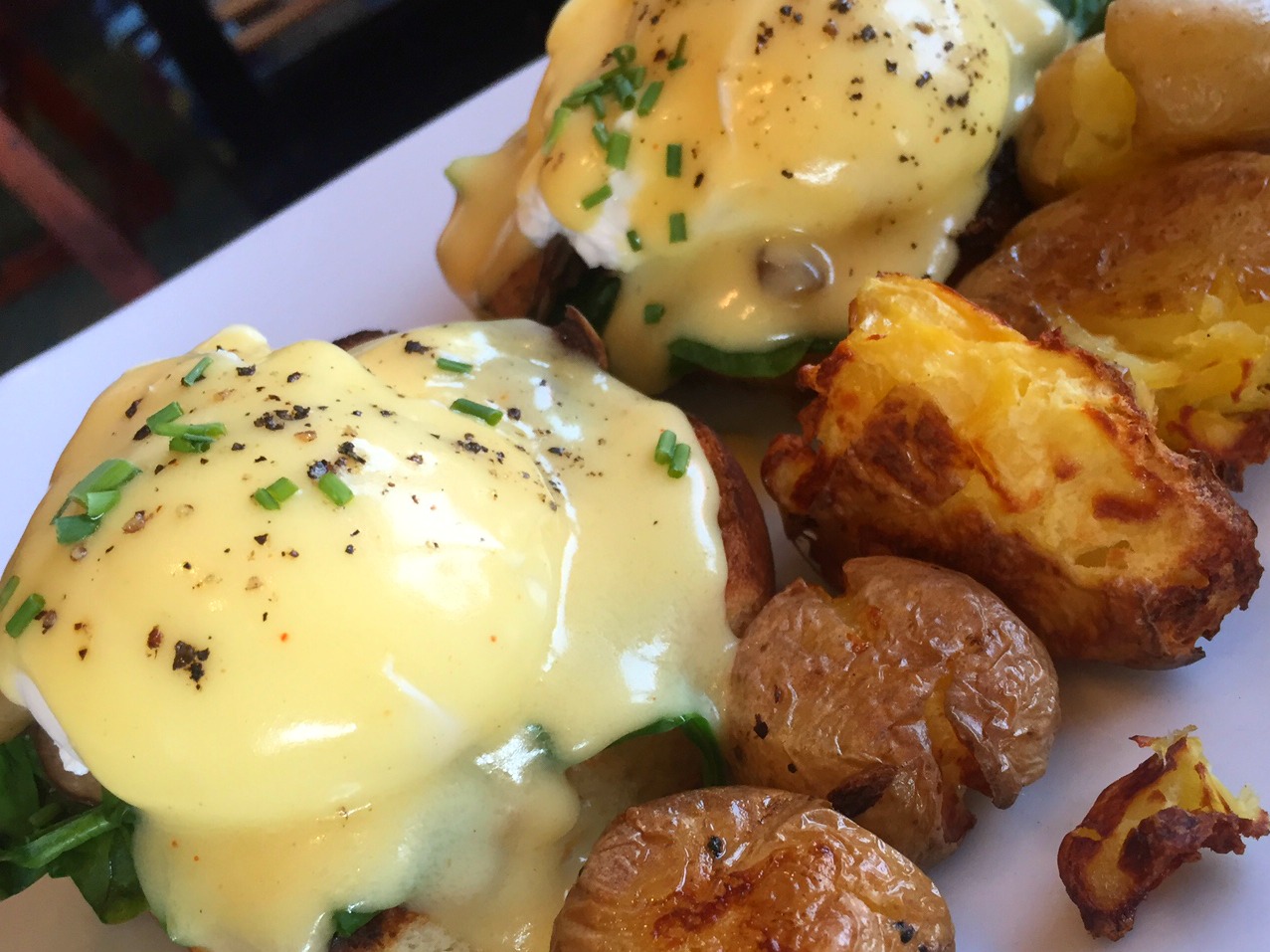 They also brought us Eggs Benedict sans lobster. I totes ate the poached egg because I’m now obsessed with them. ($13 – 680 cal). 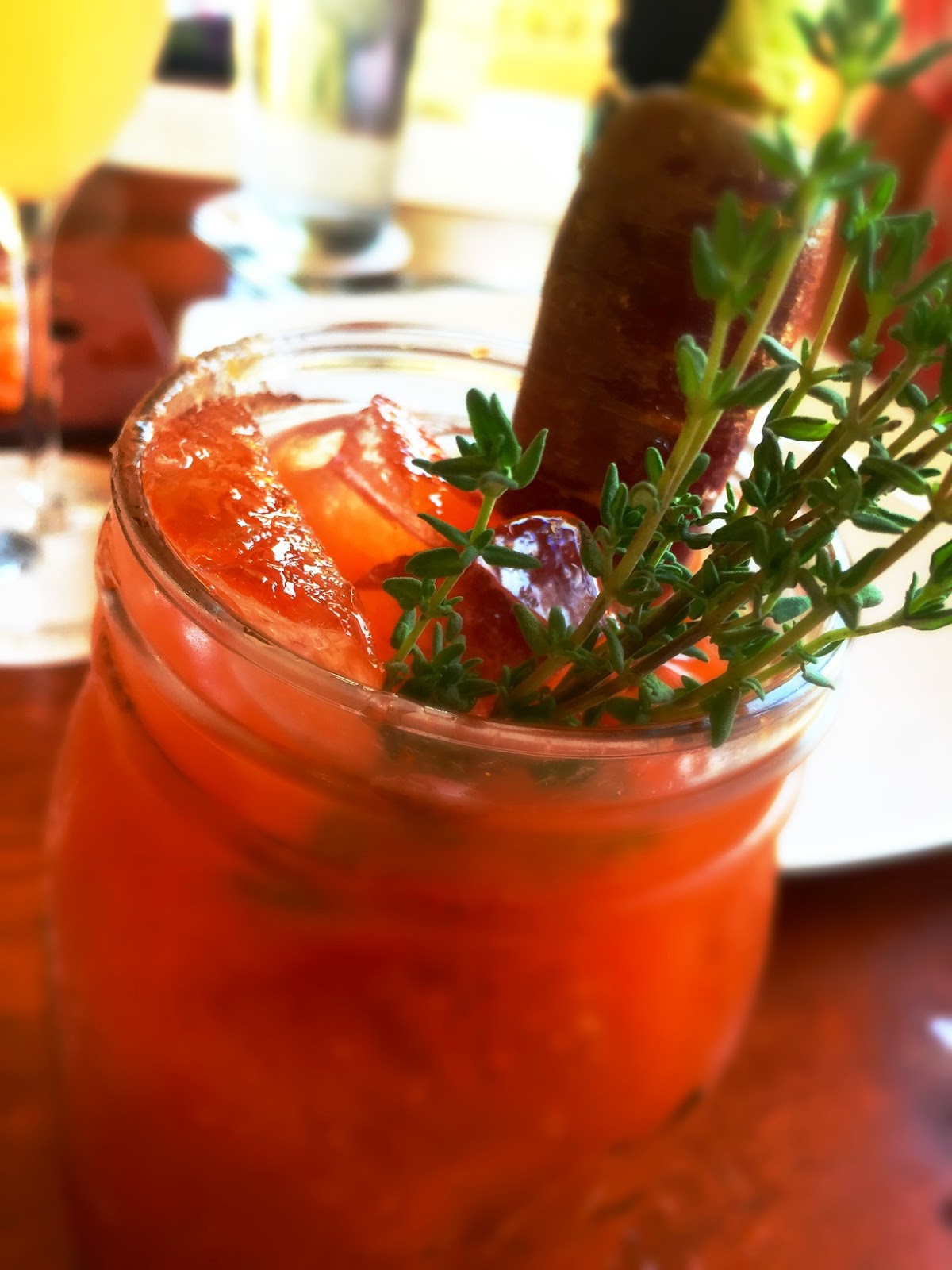 They also brought us a Shrubby Mary ($9.90 – 200 cal) which had tomato vodka, housemade tomato-celery shrub and a touch of sriracha. Neither of us actually likes Bloody Marys but we both said that – for a bloody mary – it wasn’t awful. The whole carrot sticking out was a bit much – I mean – who’s going to chomp down an entire raw carrot? I’d rather have a pickle! 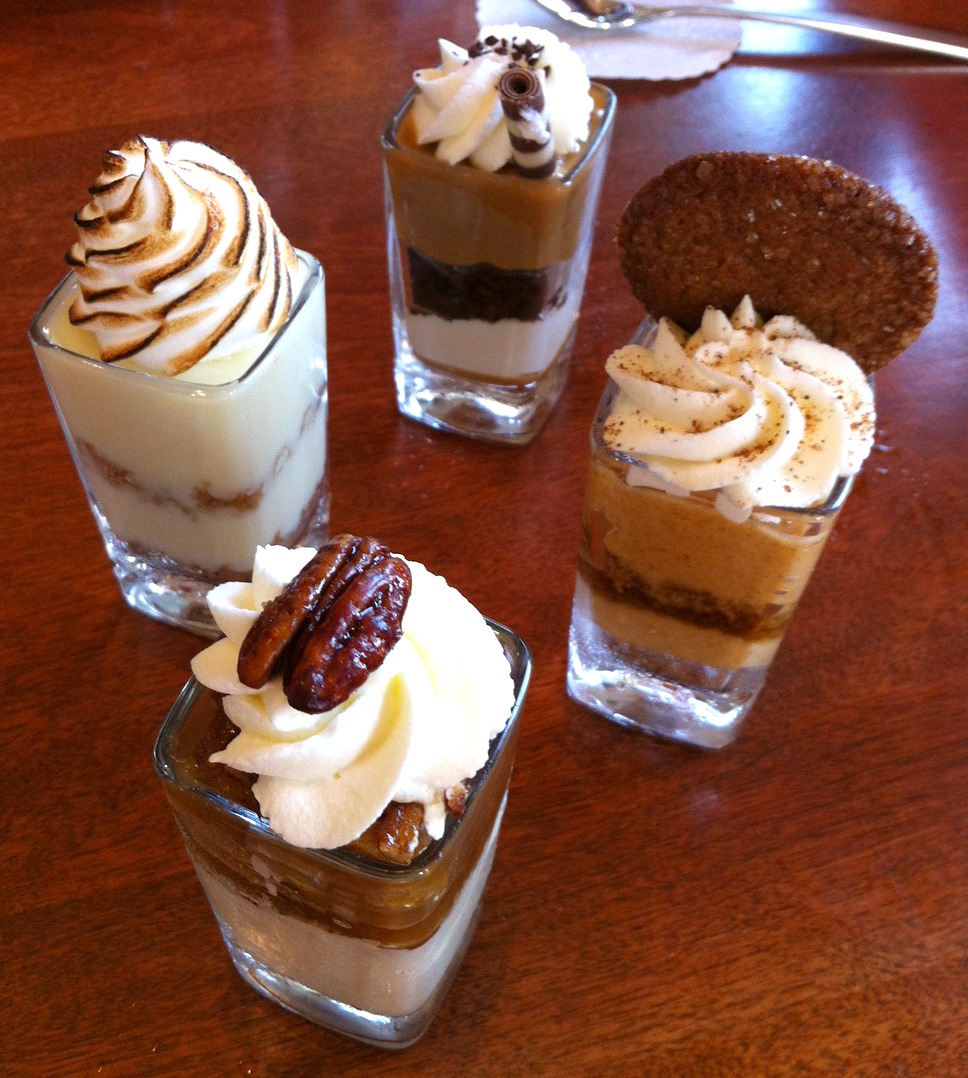 Then it was dessert time! I love Seasons 52 desserts – they’re tiny and they have so many flavors! Yum all around! We each chose a couple – I have no idea how we had room for them. These are all $3 each.
Top: Mocha Macchiato – mocha & vanilla mousse, chocolate cake, caramel sauce (290 cal)
Right: Pumpkin Pie – pumpkin mousse, gingersnap cookie (310 cal)
Bottom: Pecan Pie – vanilla bean mousse, whipped cream, honey-glazed pecan (370 cal)
Left: Key Lime Pie – pecan crust, toasted meringue (290 cal)
They were all delicious – but as it’s seasonal – if you like pumpkin or gingersnaps – get the Pumpkin Pie. I can never resist the Pecan Pie – I get it every single time – it’s the PERFECT amount of Pecan Pie!
Why Should You Go? It was a wonderful brunch – and I can comfortably say there is something for everyone! I loved brunch and can’t wait to go back!
Previous Post: « IKEA’s Swedish Crayfish Party is TONIGHT!
Next Post: Kroger’s #TasteofItaly Recipe: Sausage Spiedini Skewers »