Recently I was invited to join the latest food tour in the Cincinnati area – Riverside Food Tour – a walking tour focused on the Covington/Mainstrasse area. I have been on van and walking tours and was interested to see how this would compare. 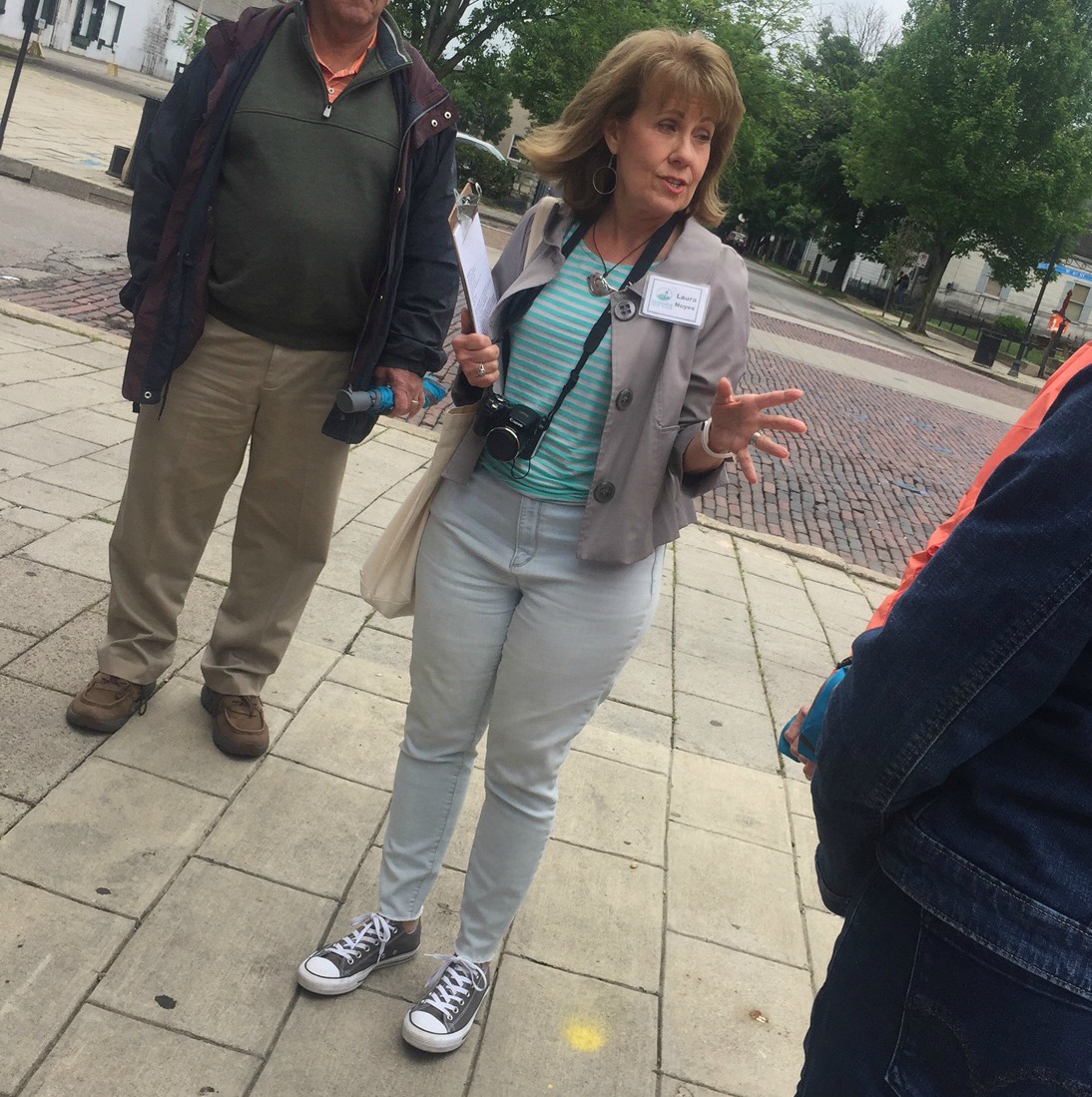 Our guides were Mike & Laura – a friendly couple – they’ve had this going for a few months and had a good crowd. I would say we were definitely the youngest ones in the group. They’ve marketed this via Groupon quite a bit so not sure if that has something to do with it. They were very prepared for us and even had umbrellas for all of us as there was a chance of showers this particular afternoon. 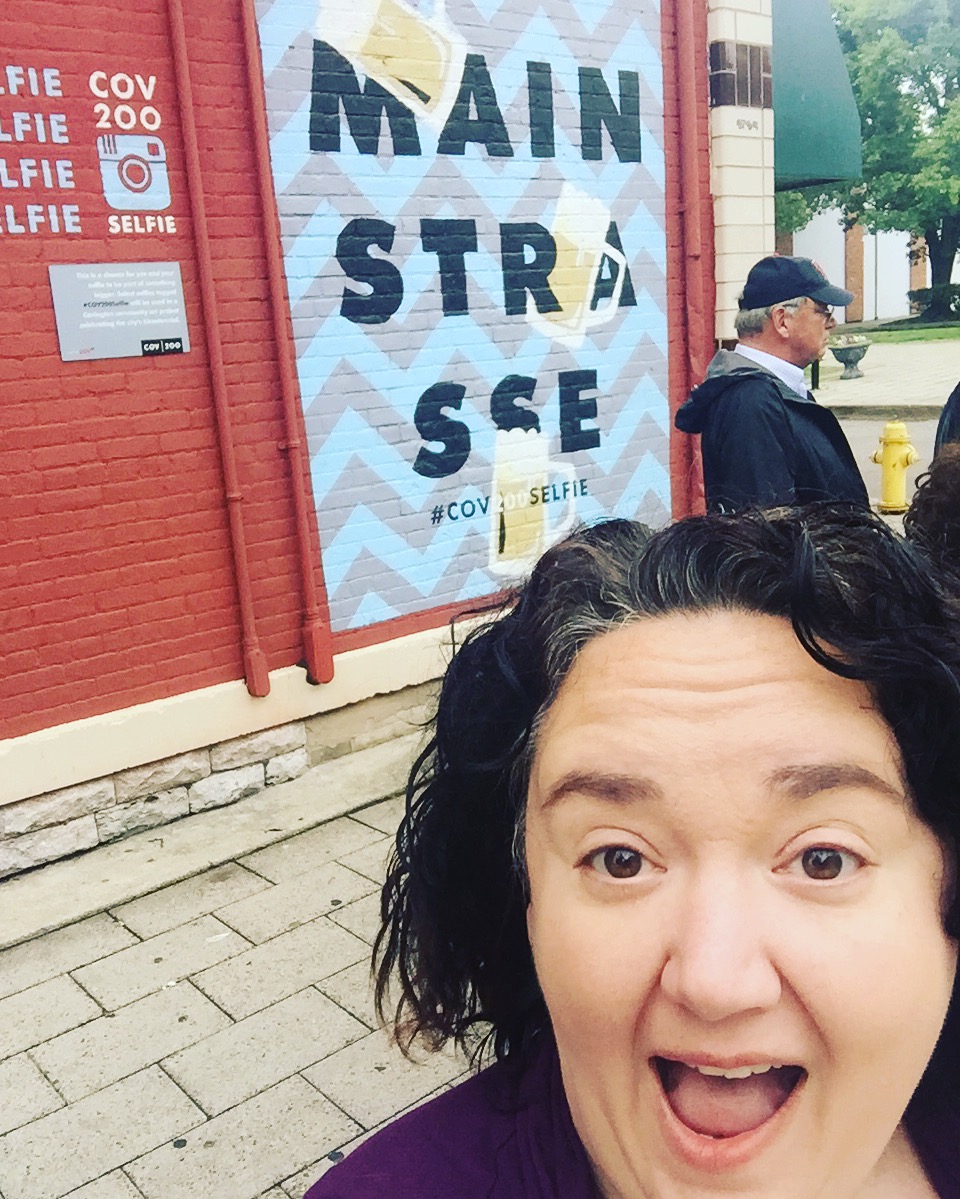 We started out near the public parking lot for Mainstrasse and I came across this big selfie wall and had to take the opportunity to try it out and join the social media haps. 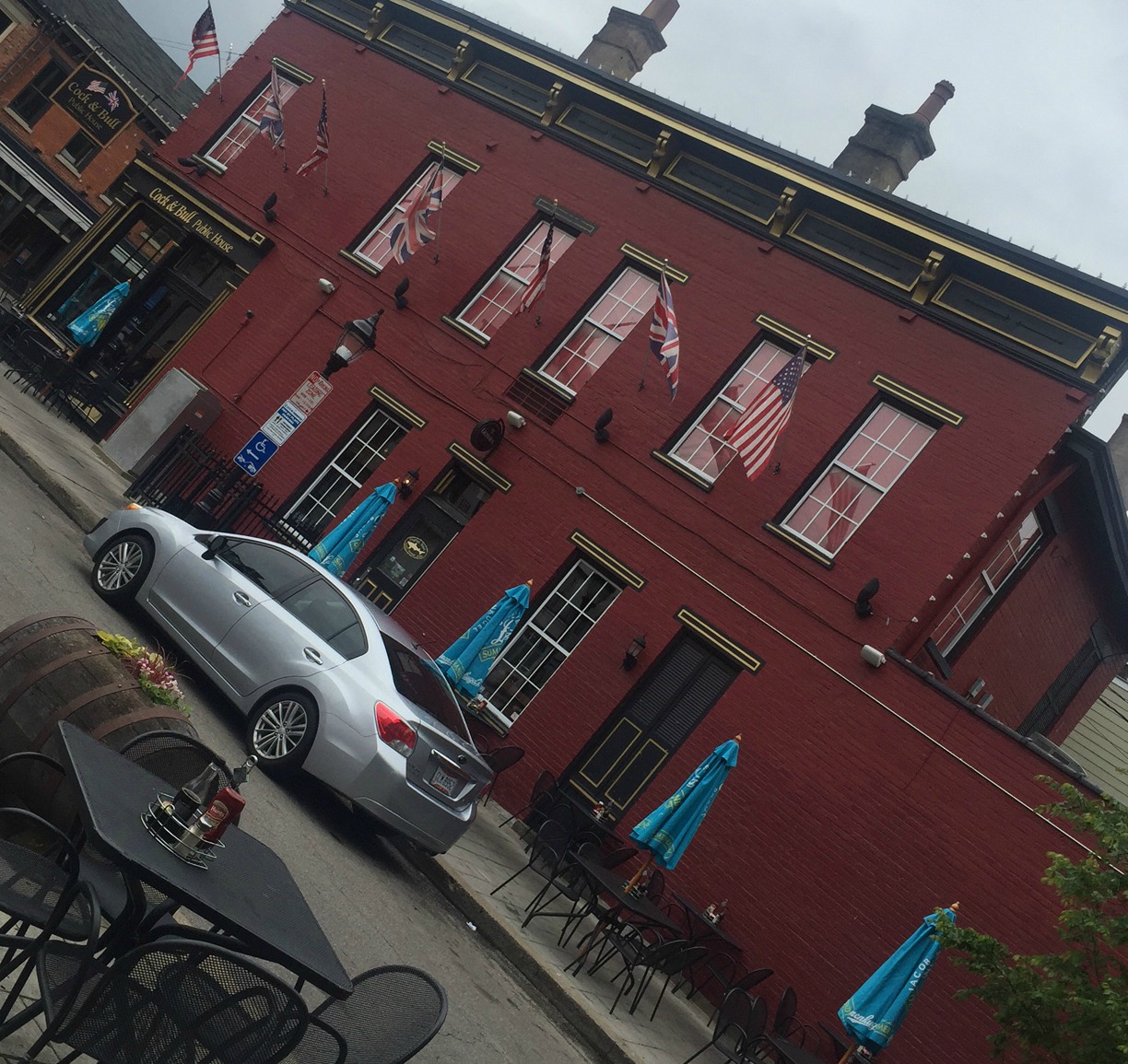 From there, we walked over to Cock and Bull and found out this used to be a Kroger – way way back in the day. We got a lot of little historical tidbits along the tour. Some were a bit more morbid than others and I think they could try and find happier NKY stories – but it’s a start and they were interesting to say the least. 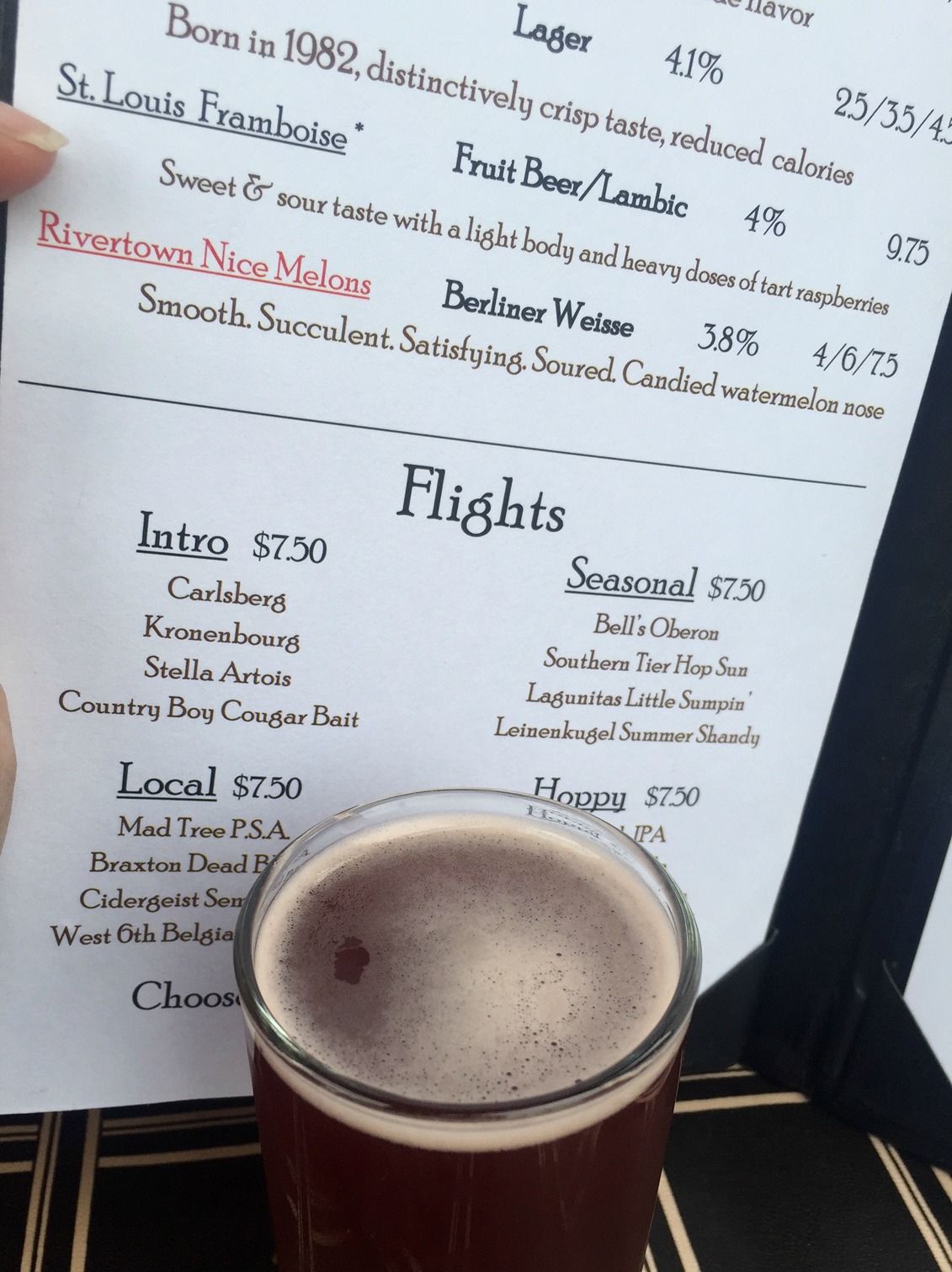 Each place was offering something a little different for us to try. Cock & Bull was nice enough to provide a beer sample and in the spirit of trying new things – I tried the St Louis Framboise – it’s a fruit beer/lambic and I loved it. It was light and refreshing – almost wine-cooler-esque – but ordering a Lambic sounds so much more 2016 than ordering a wine cooler.

We also tried their Bavarian pretzels with jalapeno cheese. I’m a sucker for a fried pretzel so no complaints from me. Everyone at our table enjoyed the food. Most of our group was from the NKY area but I was surprised at how many had NOT been to Cock & Bull. 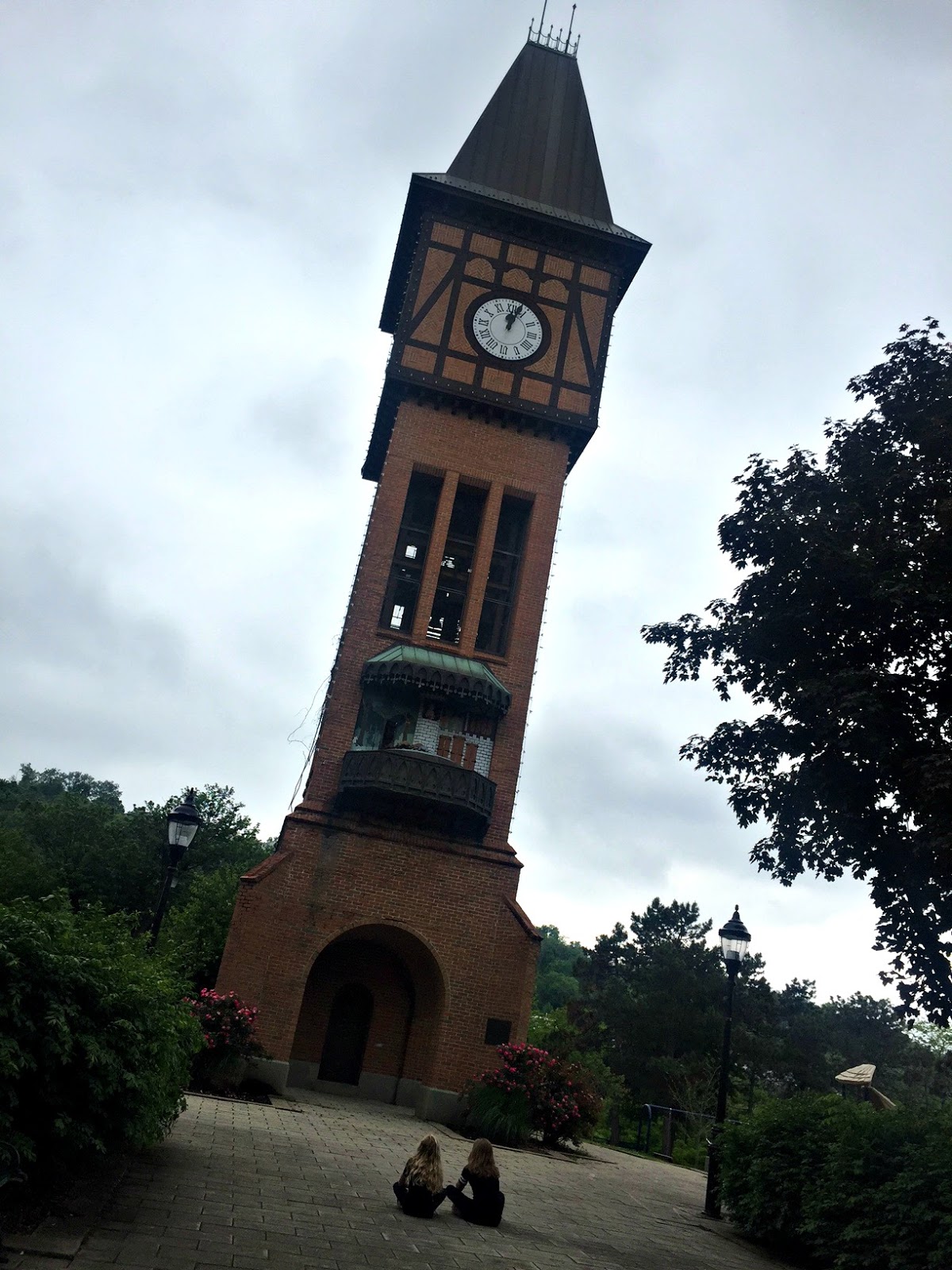 Our next stop took us by Goebel Park Glockenspiel – were were in time to see the story of the Brothers Grimm tale come to life. What was fun was that these two girls knew what time it was as well and came running to sit and watch the story unfold as well. It’s a fun site – especially if you haven’t seen it before. 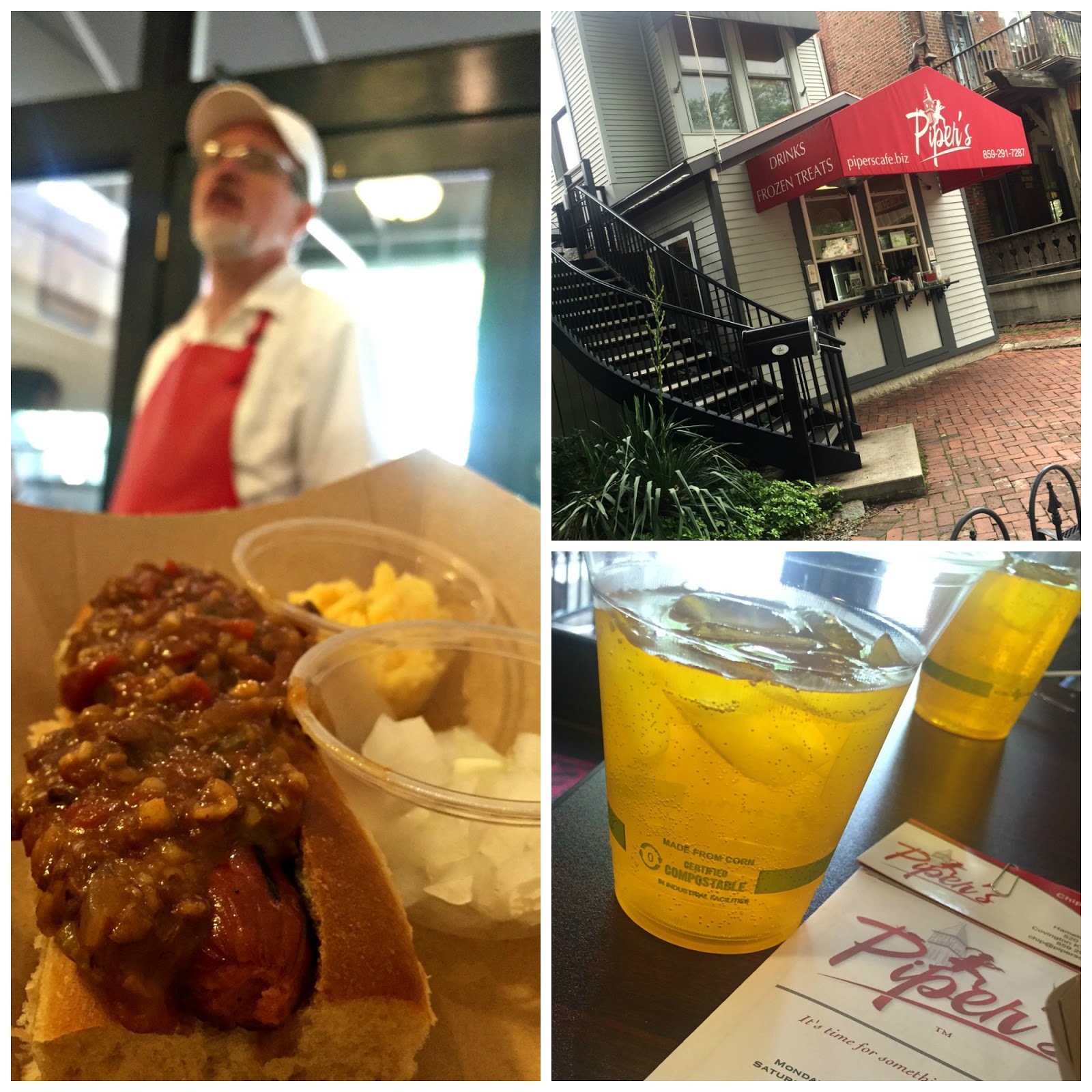 From there we headed back across the street to Pipers Cafe – which at first glance – is an ice cream shop. But it’s a lot more. First of all – there’s a restaurant inside – secondly it’s very locally focused. They source locally and never have the same “special” twice – never ever. It’s an interesting menu to say the least and it also doesn’t include traditional sodas – they have Soda Streams and make unique concoctions every day. 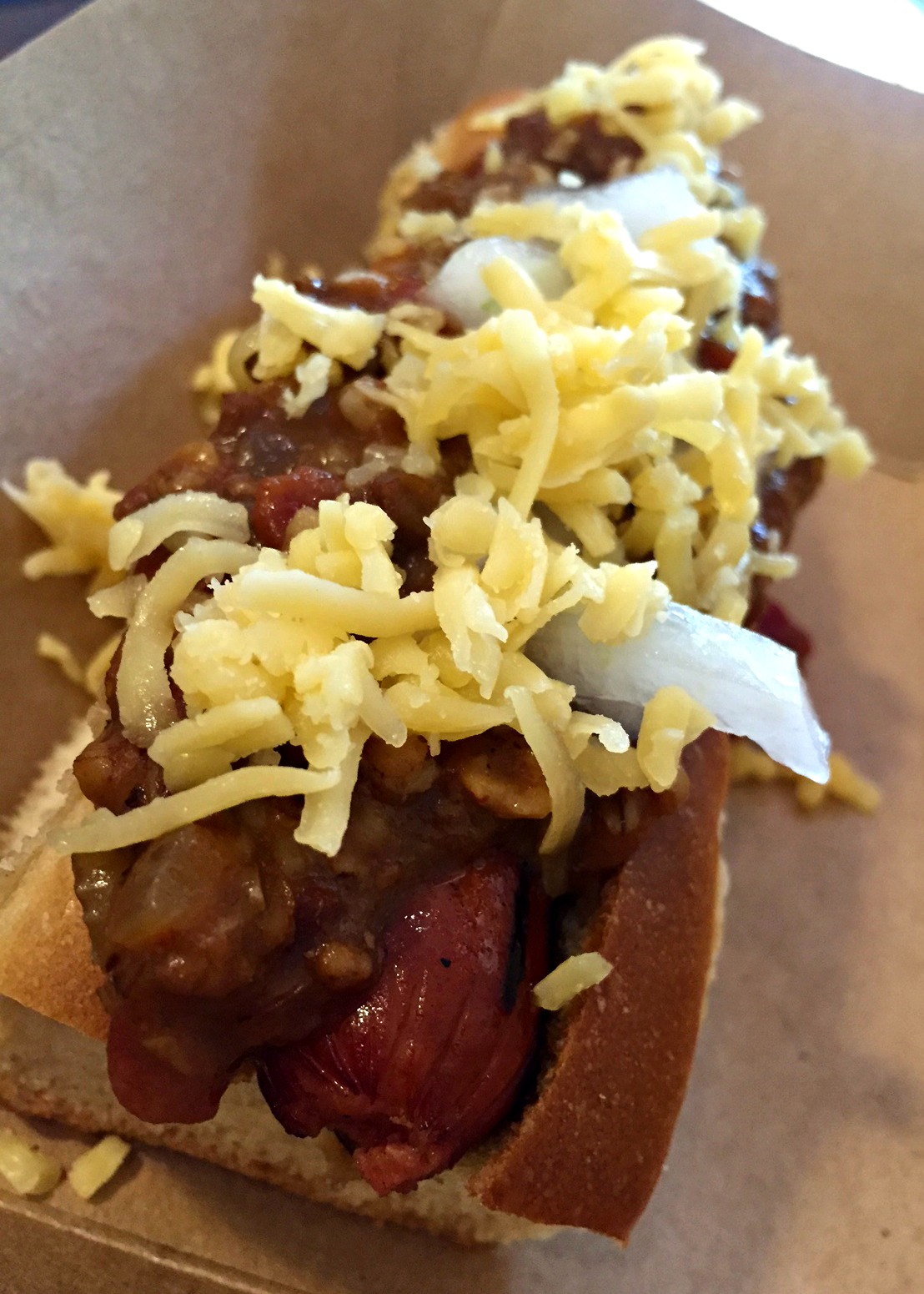 We got to try the Goetta Guinness Chili Dog ($7.25) – the bread is locally sourced, the all beef hot dog doesn’t have nitrates, etc. This isn’t your ball park cheese coney. I am not a goetta or Guinness fans so the chili didn’t win me over but the concept did for sure. 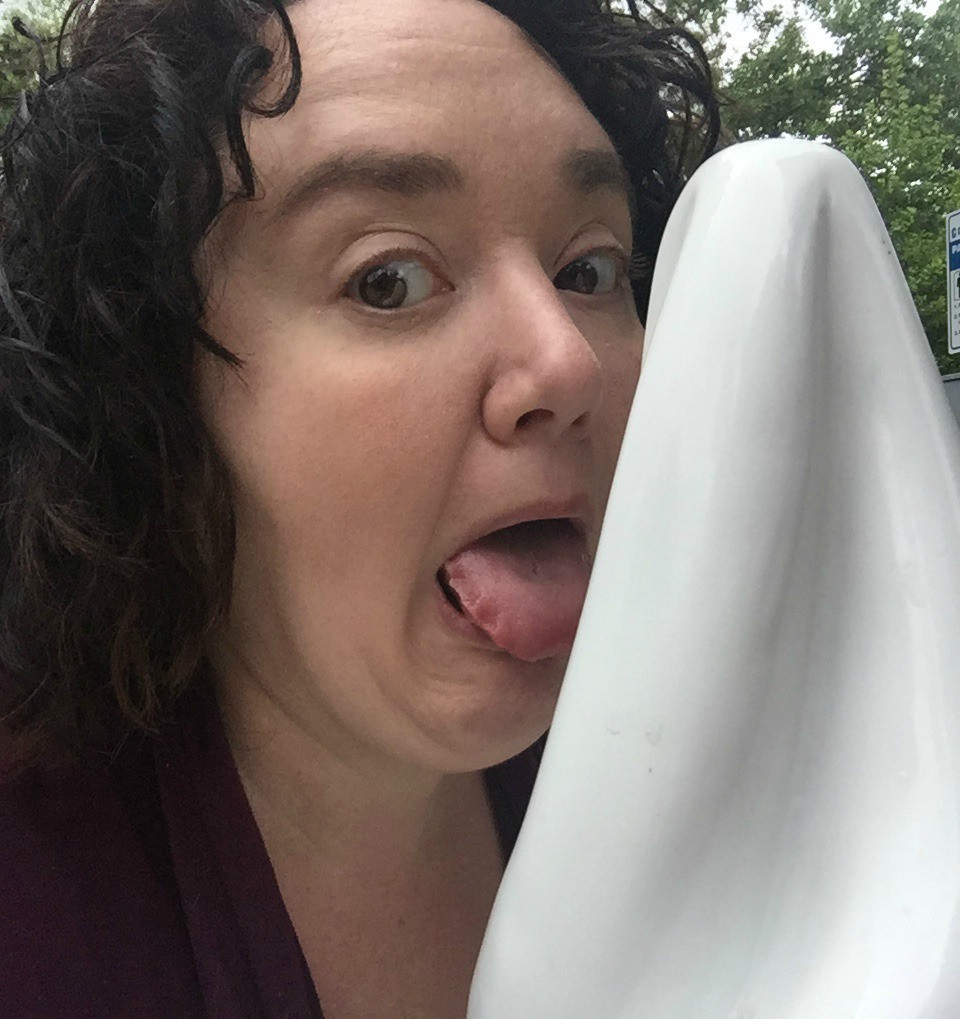 They also have Lactose free soft serve – which is unique as well. There are the normal flavors (chocolate, vanilla) and the not-so-normal like Tutti Frutti, Cantaloupe and Grape! We tried a vanilla and it was really tasty and nice knowing that I wasn’t going to be paying the price later…if you know what I mean. 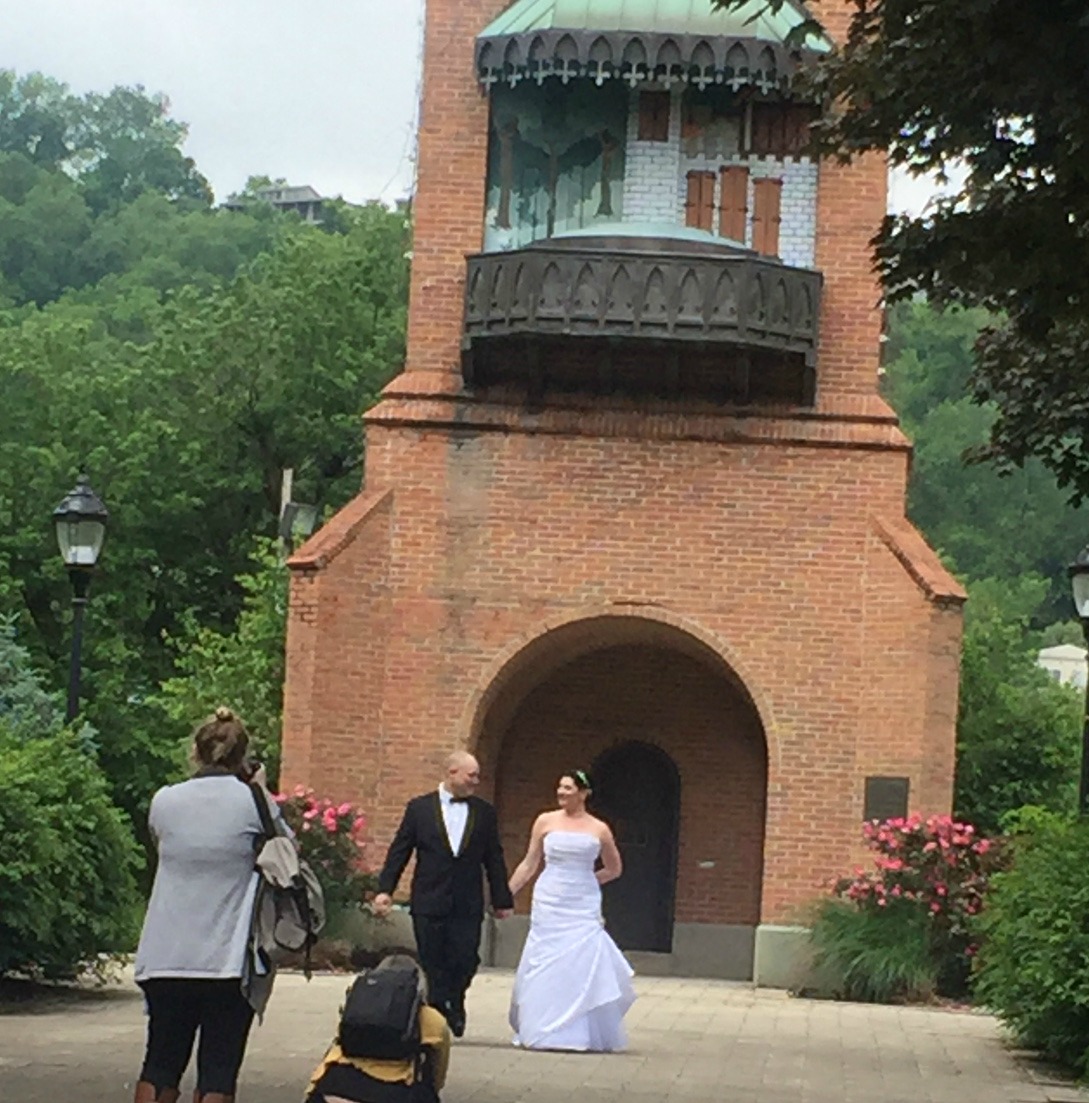 After leaving Piper’s – we noticed a couple getting married across the street. Collective “awwww”. Then we trekked up to Mainstrasse and found that the former Chez Nora is opening soon under the name Lisse. Most of our group did NOT like the newly white exterior but I thought it was really cool looking. So we’ll see how the soon-to-open steakhouse fares on the strip. 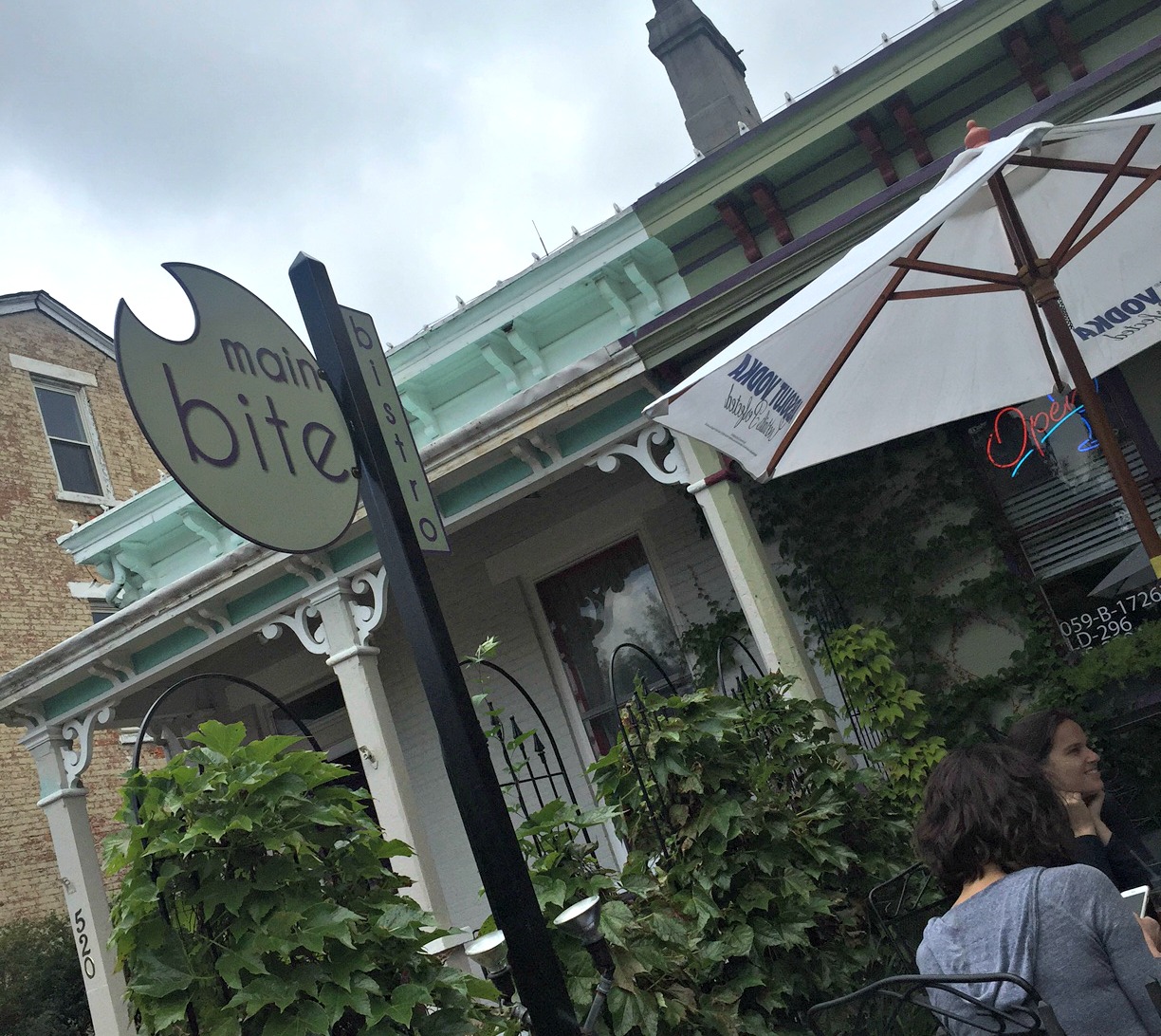 We took a turn there and went to Main Bite. This spot has been many a restaurant just in the 12 years I’ve been here – it’s one of those “nothing seems to stick” spots. It’s small with a great patio and the chef came out to greet us. 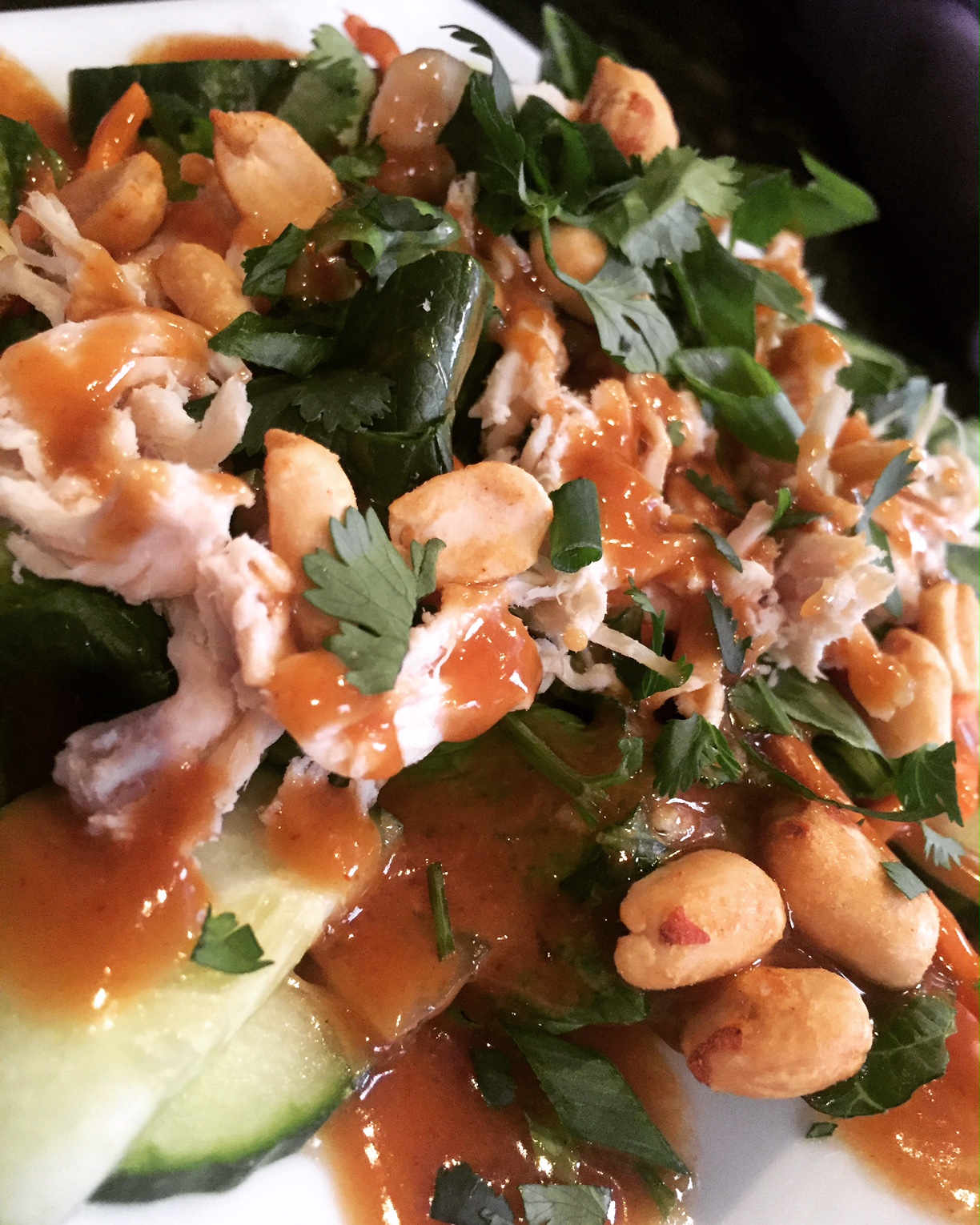 There we tried a Thai Chicken Salad and it was really good. I would never order this salad if I were to just see it on a menu. It’s just not my favorites – I don’t love nuts on a salad or thai dressing. But this was REALLY good. Crunchy and refreshing – I definitely recommend.

This was also the site of more history and I didn’t love this story she told – albeit relevant and historical – it wasn’t the kind of conversation you want to have while eating a salad. 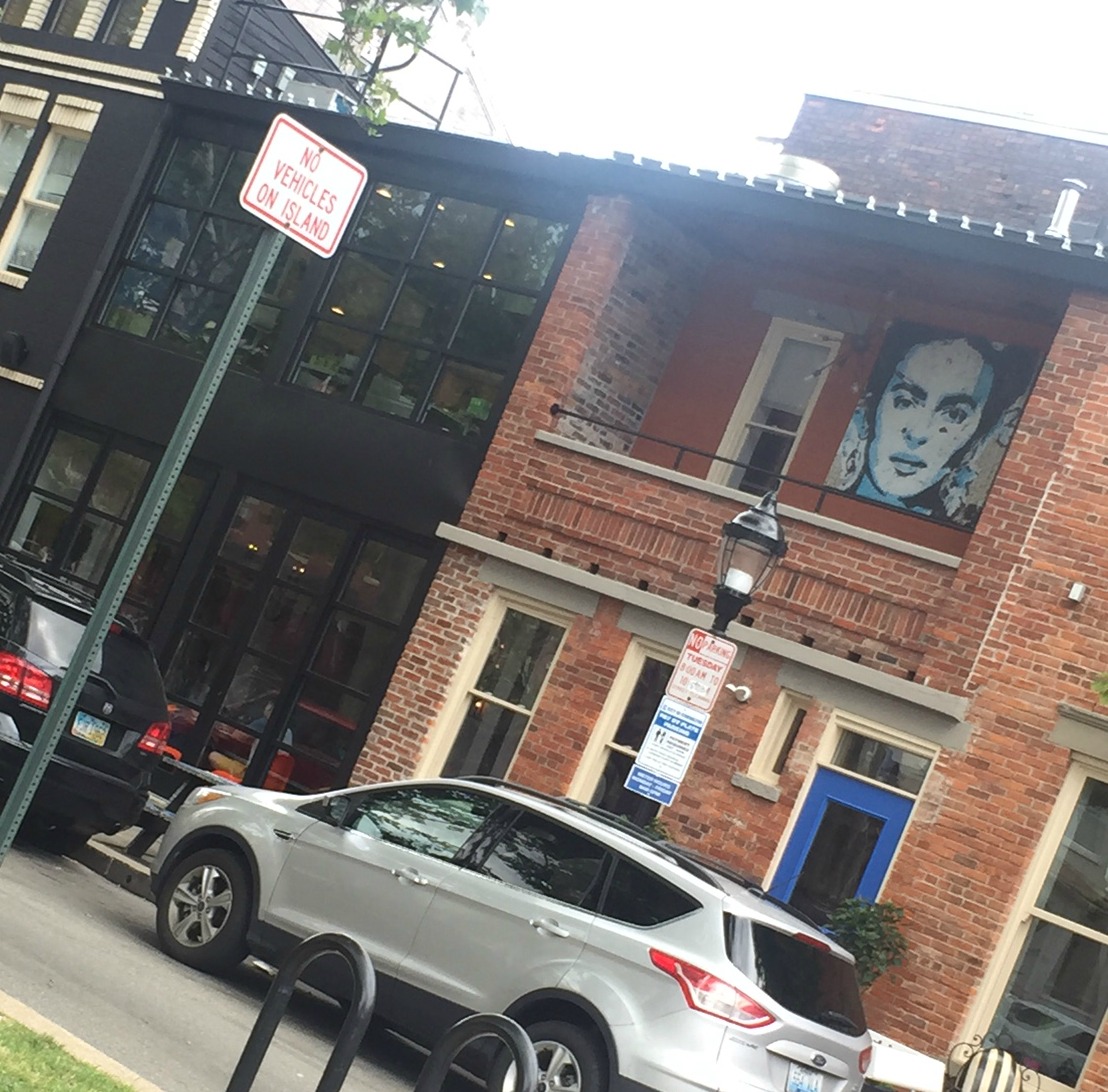 We also saw Fridas – which I’ve heard is excellent. It’s not on the tour but I’m putting it on my list. 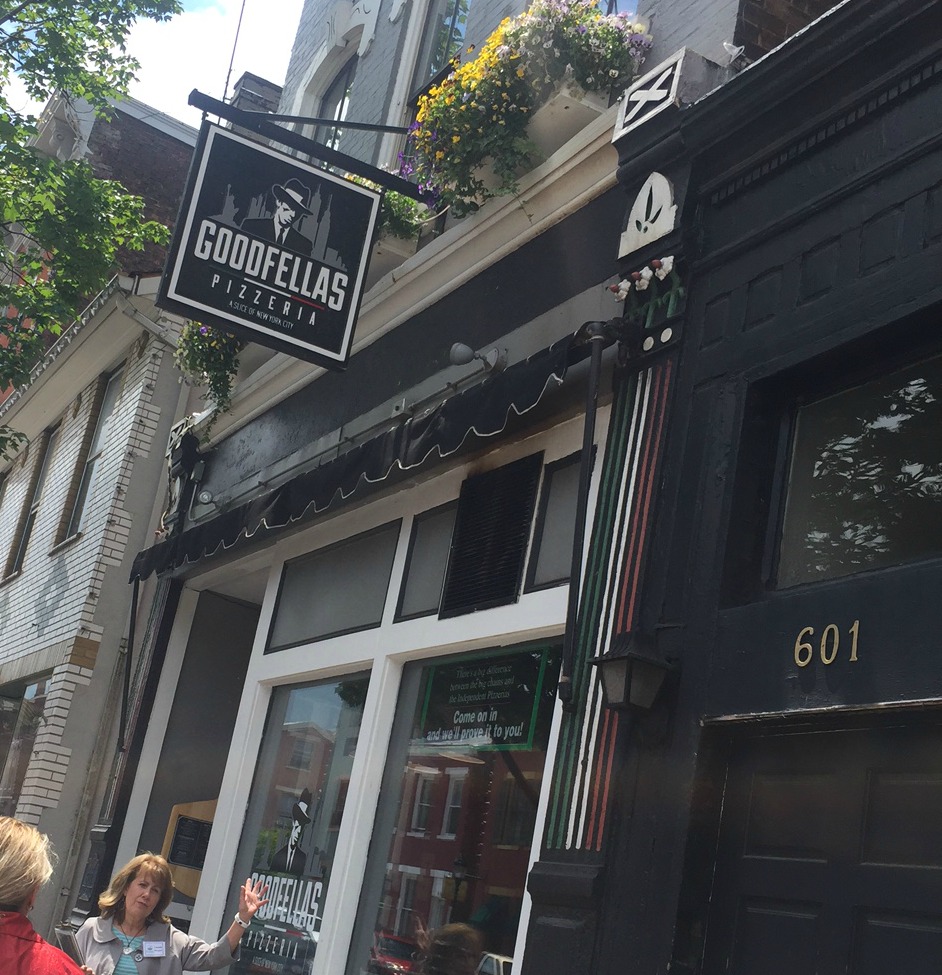 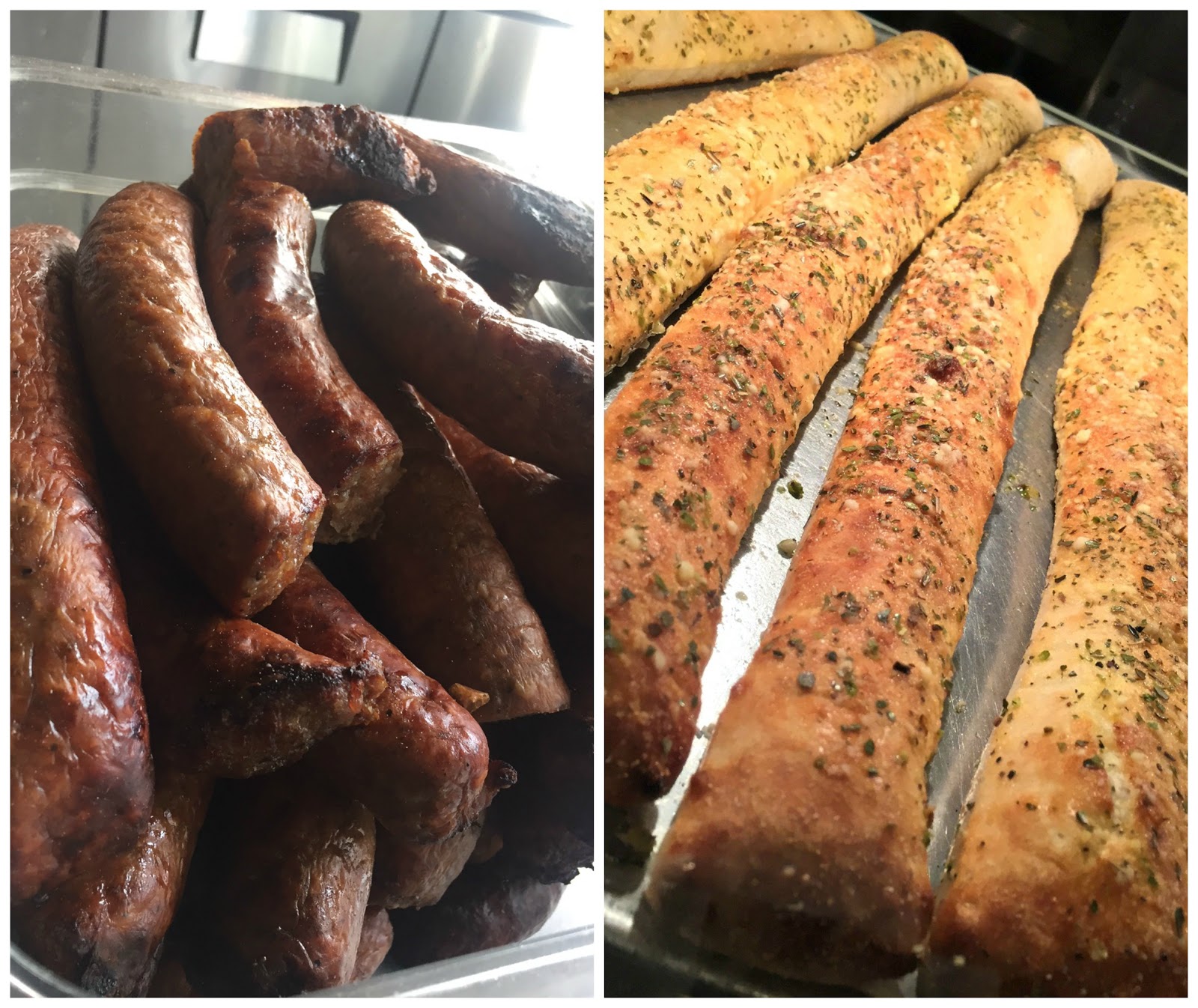 Pretty good sign when you walk in the door if there’s a bin of sausage and a pan of breadsticks as long as your arm. 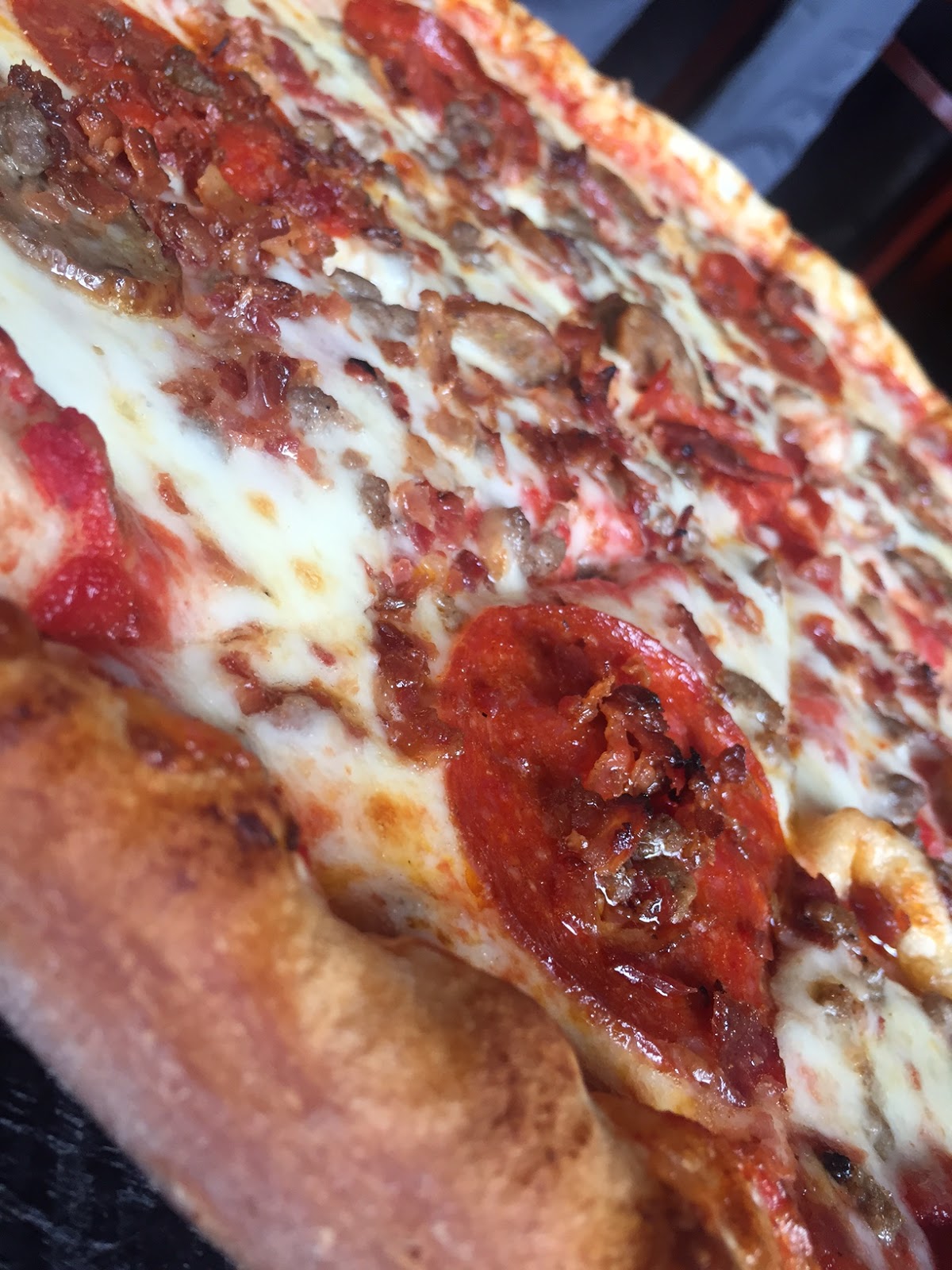 The pizza looked good as well. 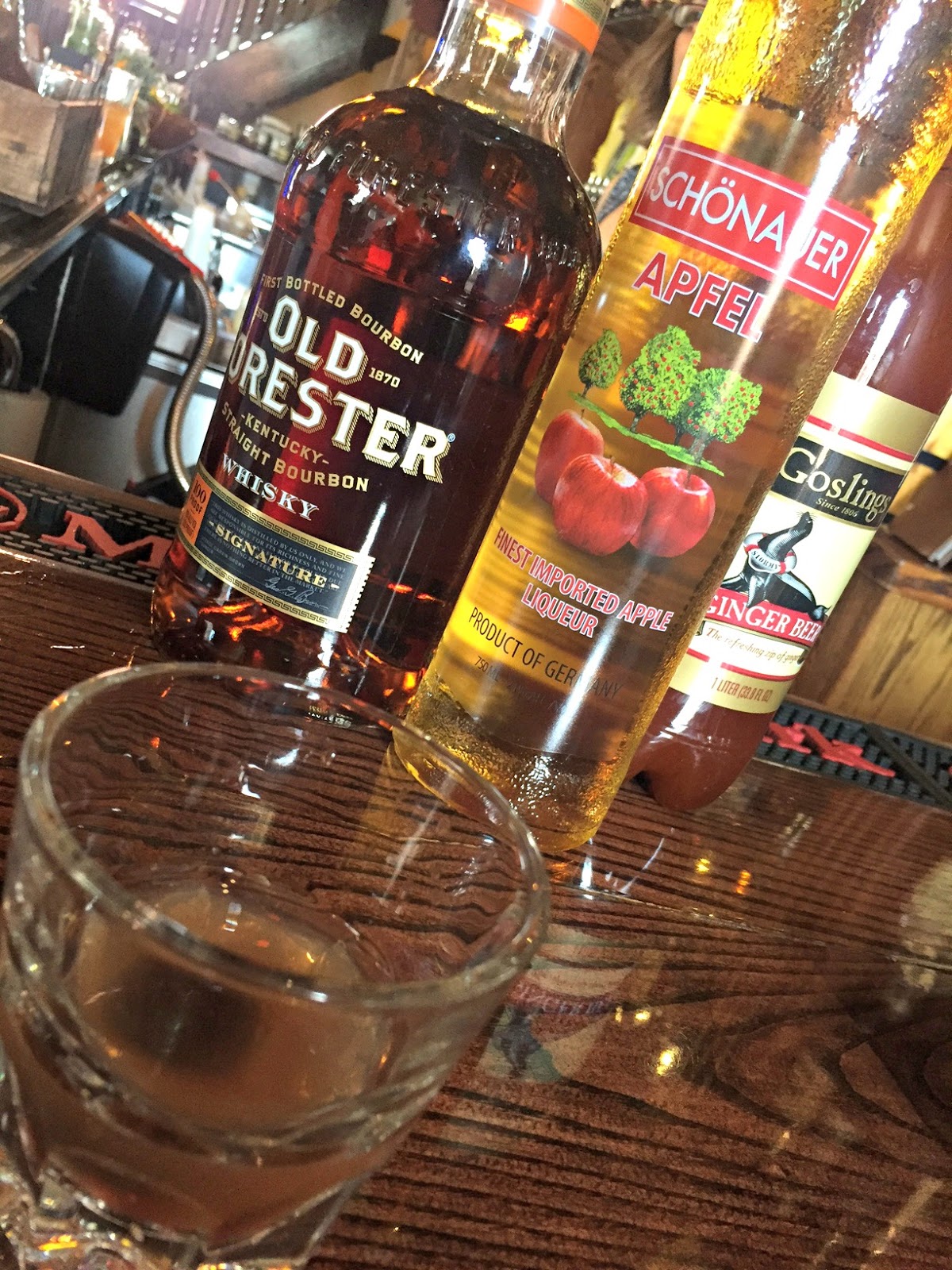 We headed upstairs where they had concocted a drink just for us – but it had whiskey and other things that didn’t appeal to this 98% alcohol free blogger – one sip and I was done – but others liked it. 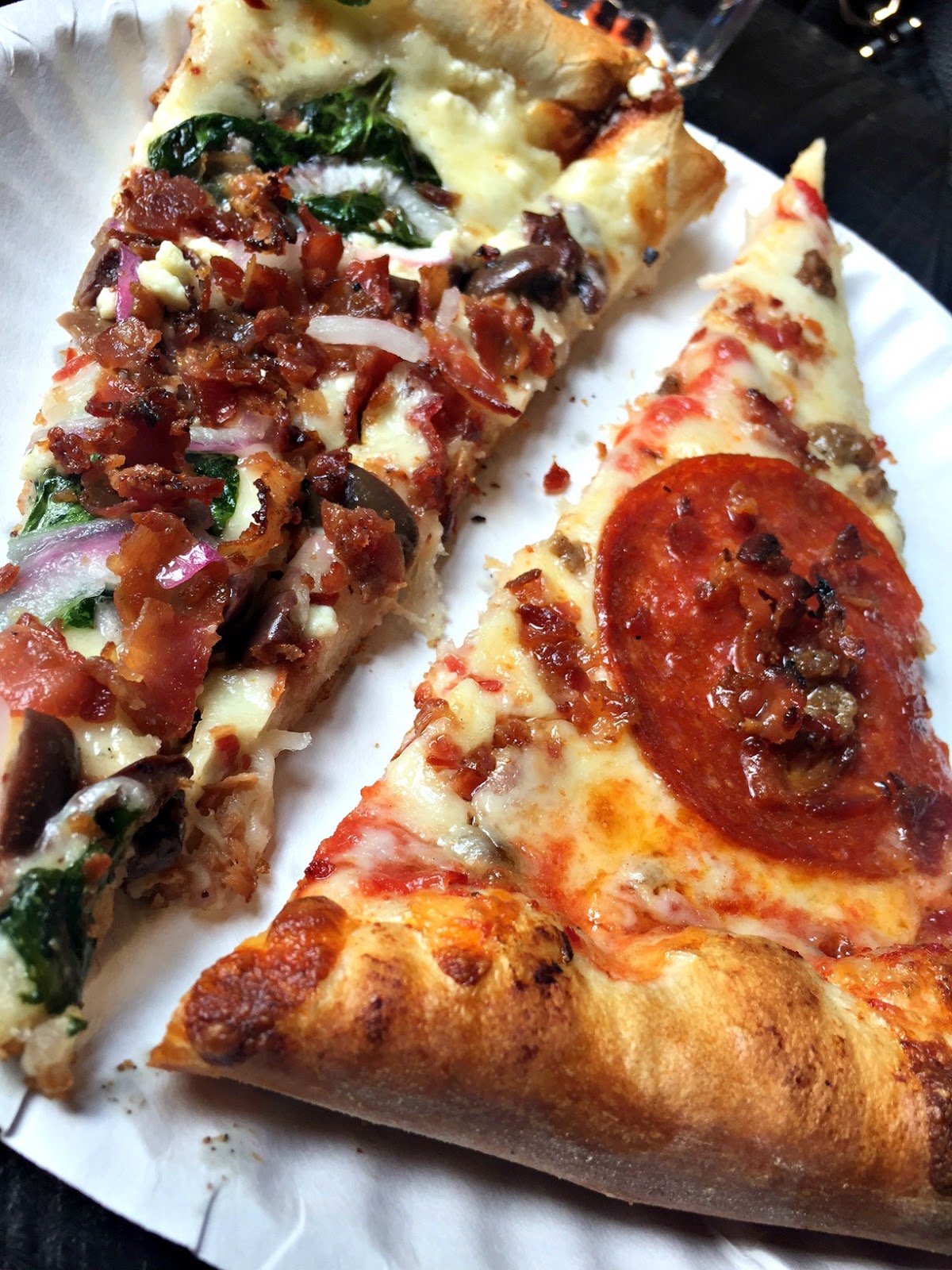 We tried two pizzas: Jimmy the Gent (Greek) & Goodfella (4 Meat). They were BOTH fantastic! I mean – FANTASTIC!!! The Jimmy the Gent was different than I expected but just as delicious as I hoped with spinach, tomato, feta and more. The Goodfella was also amazing with bacon, sausage, pepperoni and ground beef. I was already getting a little full but couldn’t help but kill 3+ pieces of pizza. So. Good. #newfavorite 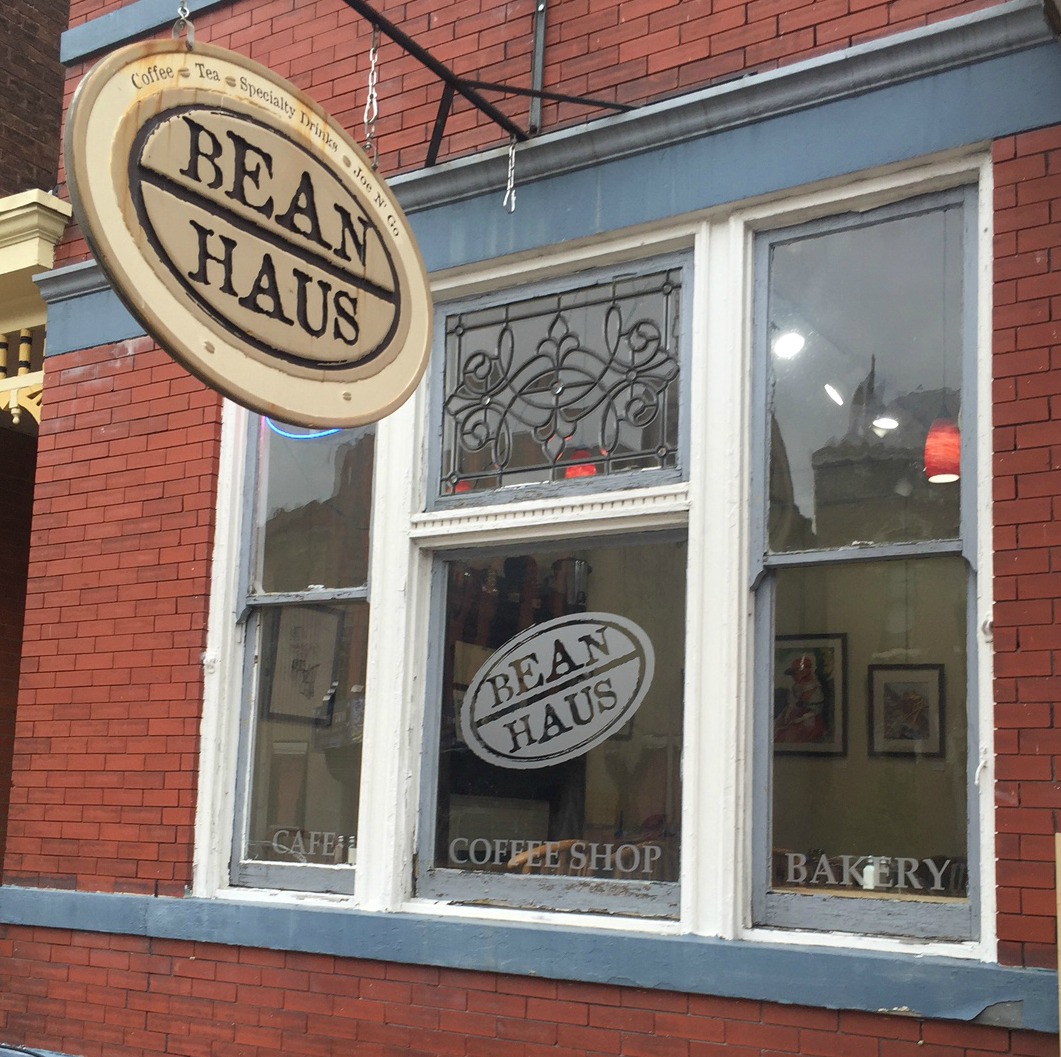 Lastly we wobbled through Mainstrasse to Bean Haus. I say wobbled because we were FULL at this point. So full we really didn’t want anything else to eat. 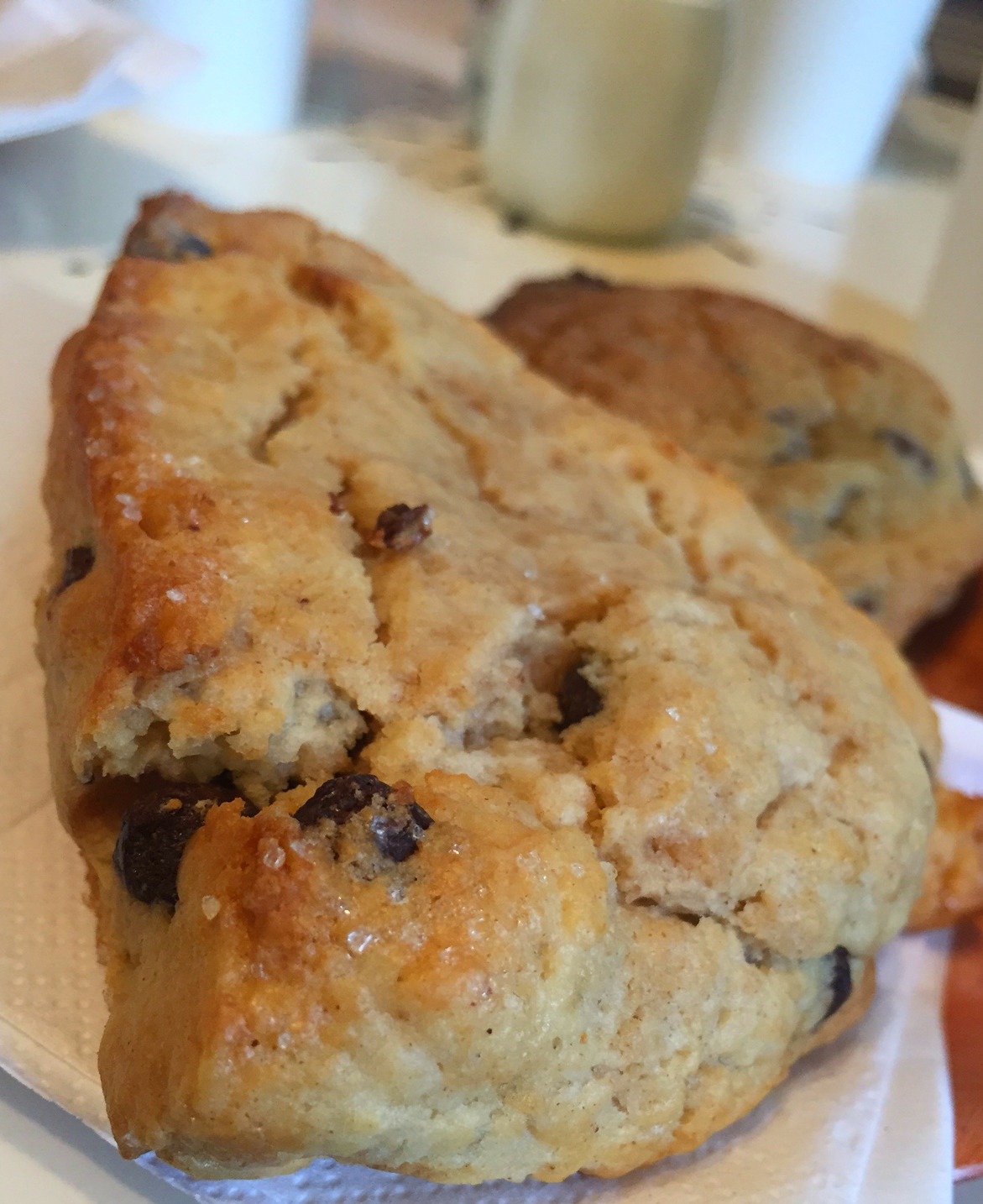 Until we were faced with a freshly baked peanut butter cup scone. Yeah – suddenly I found my dessert pocket! 😉 I had actually never had a scone and I really liked it. It was like a cookie but much thicker and heartier – soft butter would have been decadent but wasn’t necessary. 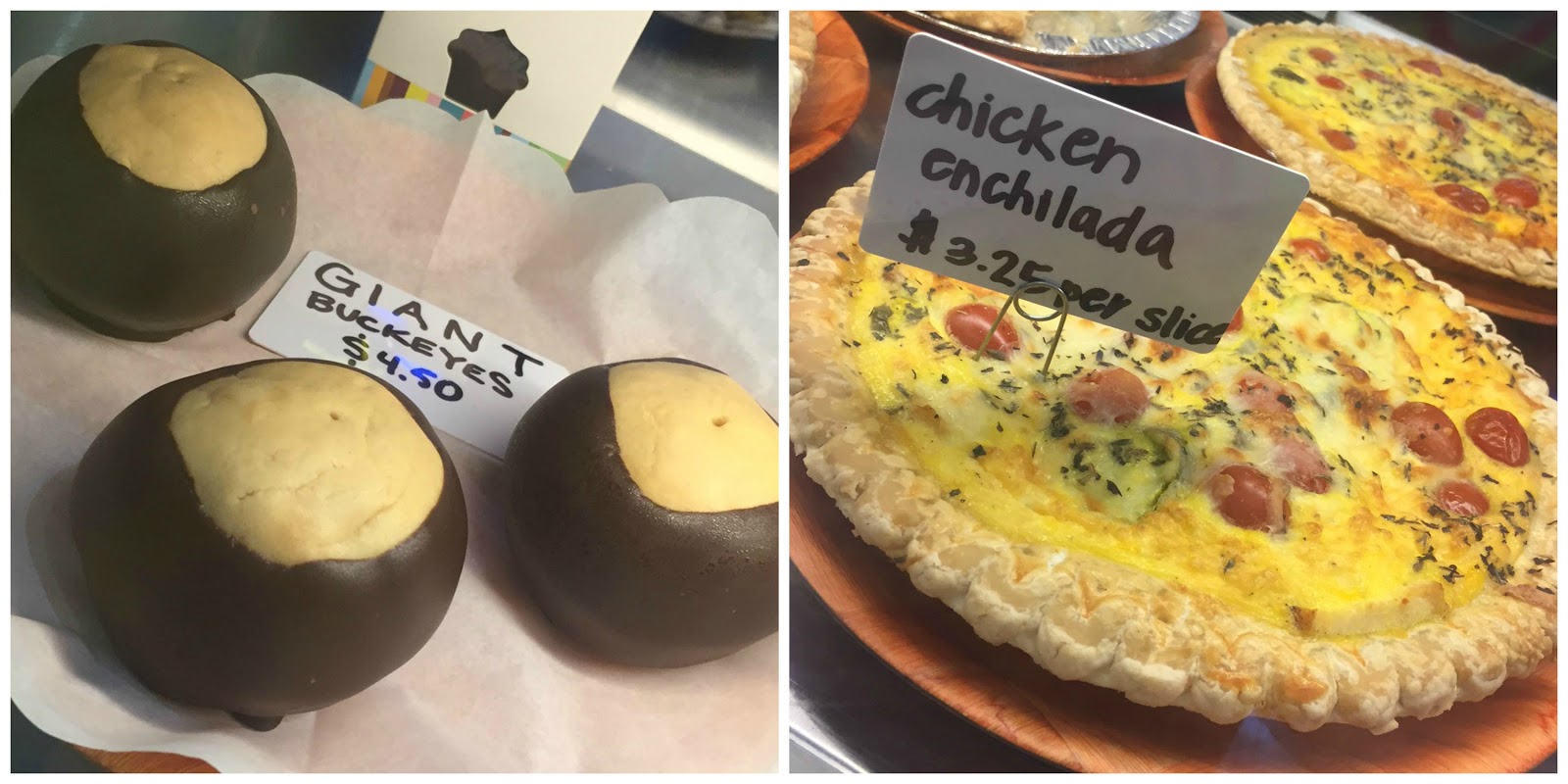 As we were leaving we spotted giant buckeyes (larger than my fist – really the size of a baby’s head) and chicken enchilada quiche. Yum and yum.

All in all – I had a great time on the Riverside Food Tour – there was a lot of food – so be sure to go hungry. The variety was good as well – it was nice to try some new places and some new foods. Everything they chose was delicious as well. It’s a pretty walk too. My favorite of the day was Goodfellas Pizza by far – it was some of the best pizza I’ve had in the city – so I’m definitely glad to have discovered that! Thanks again to Mike & Laura for their hospitality and for the free tickets to the tour!