We were tapped with a full 2 days of beef, beef and more beef! We learned about beef, cut up beef and – most importantly – ate beef! So let’s get to it! Bring on the cow! 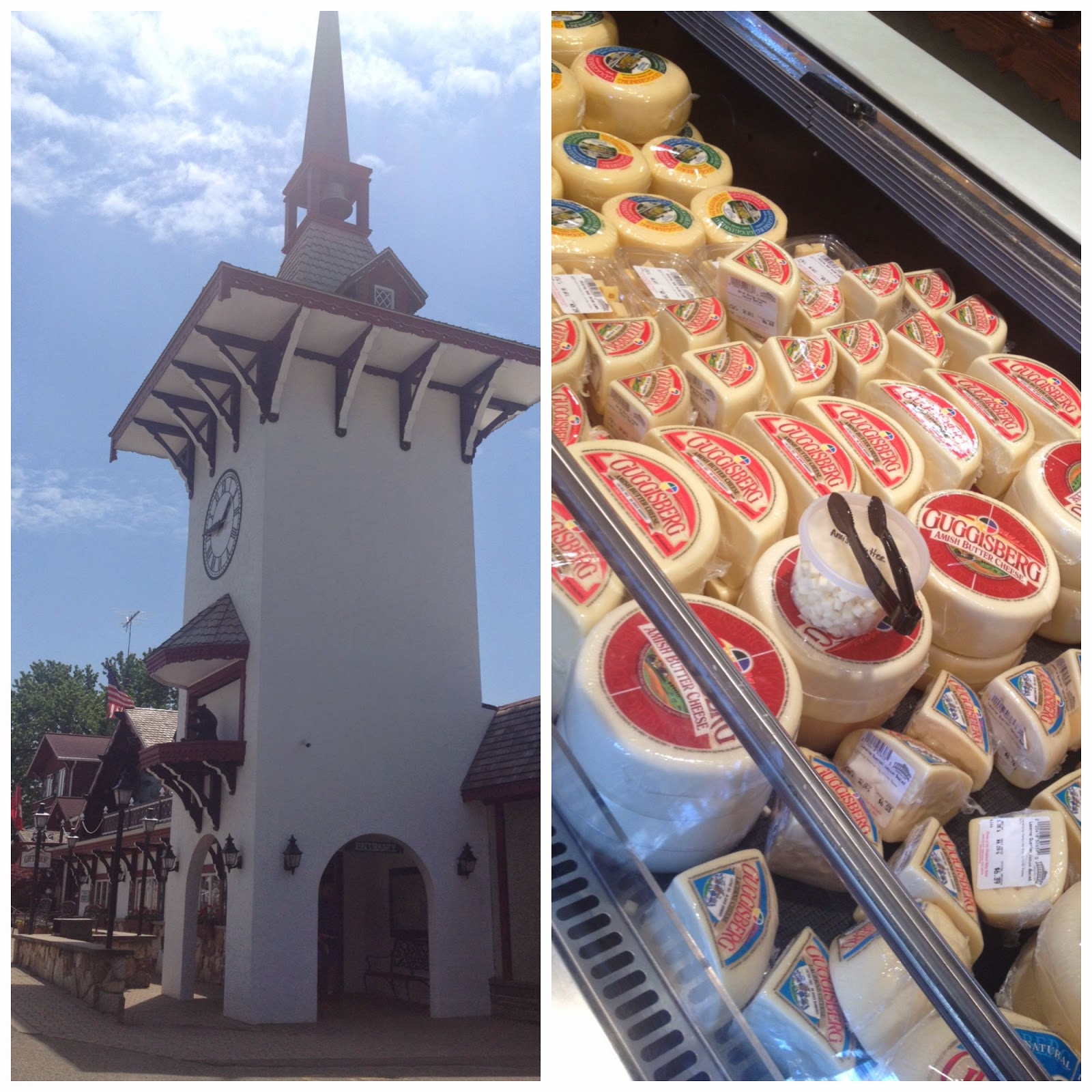 If you’ve never been to Wooster – it’s between Columbus and Cleveland in Amish country! I love me some Amish (i.e. a bit obsessed). I did not photograph any Amish – because that’s not cool in their world – but let me tell you the sight of a little Amish boy running up his driveway with his hat and suspenders – ADORBS!

Besides the Amish – there’s a whole lotta cheese. We stopped at the Guggisberg Cheese store to check it out. They make the cheese there and sell every kind of cheese you can think of. I came away with a tub of mixed cheeses and it was some good stuff! 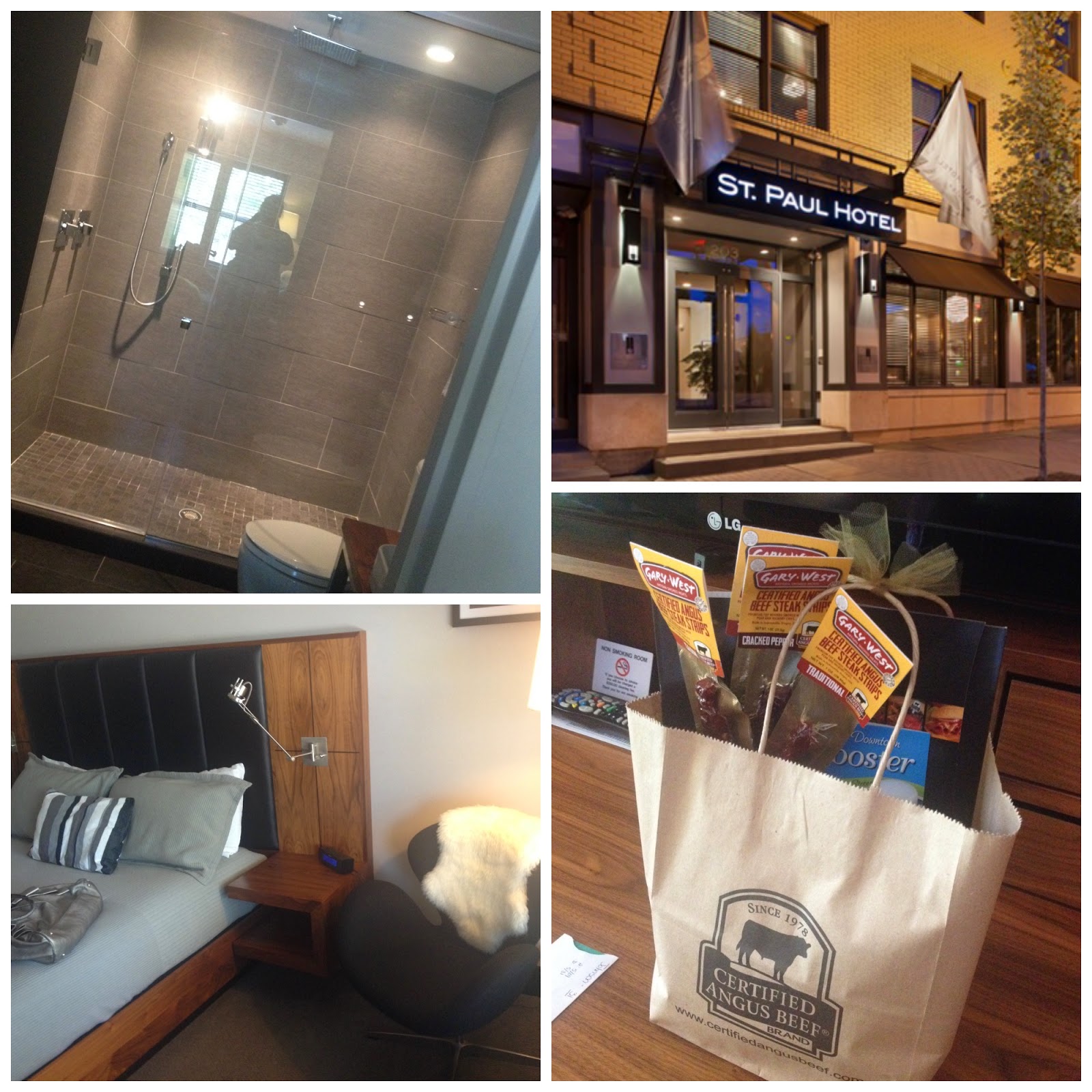 We stayed at the St. Paul Hotel in downtown Wooster and it was AMAZING! I absolutely loved everything about this hotel. It’s a very small boutique hotel that was originally built as a hotel in the late 1800s. They’ve remodeled and it is beautiful. The bed is extremely comfortable, the staff is friendly, the complimentary breakfast is DELICIOUS – I could just go on and on! But I have to say – my favorite thing was the heated floor in the bathroom! Who knew heated floors would be that magnificent – but they were!

Hands down – if you’re ever in Wooster – stay at the St. Paul. (They do have a college in Wooster – beautiful campus – so it could happen!) 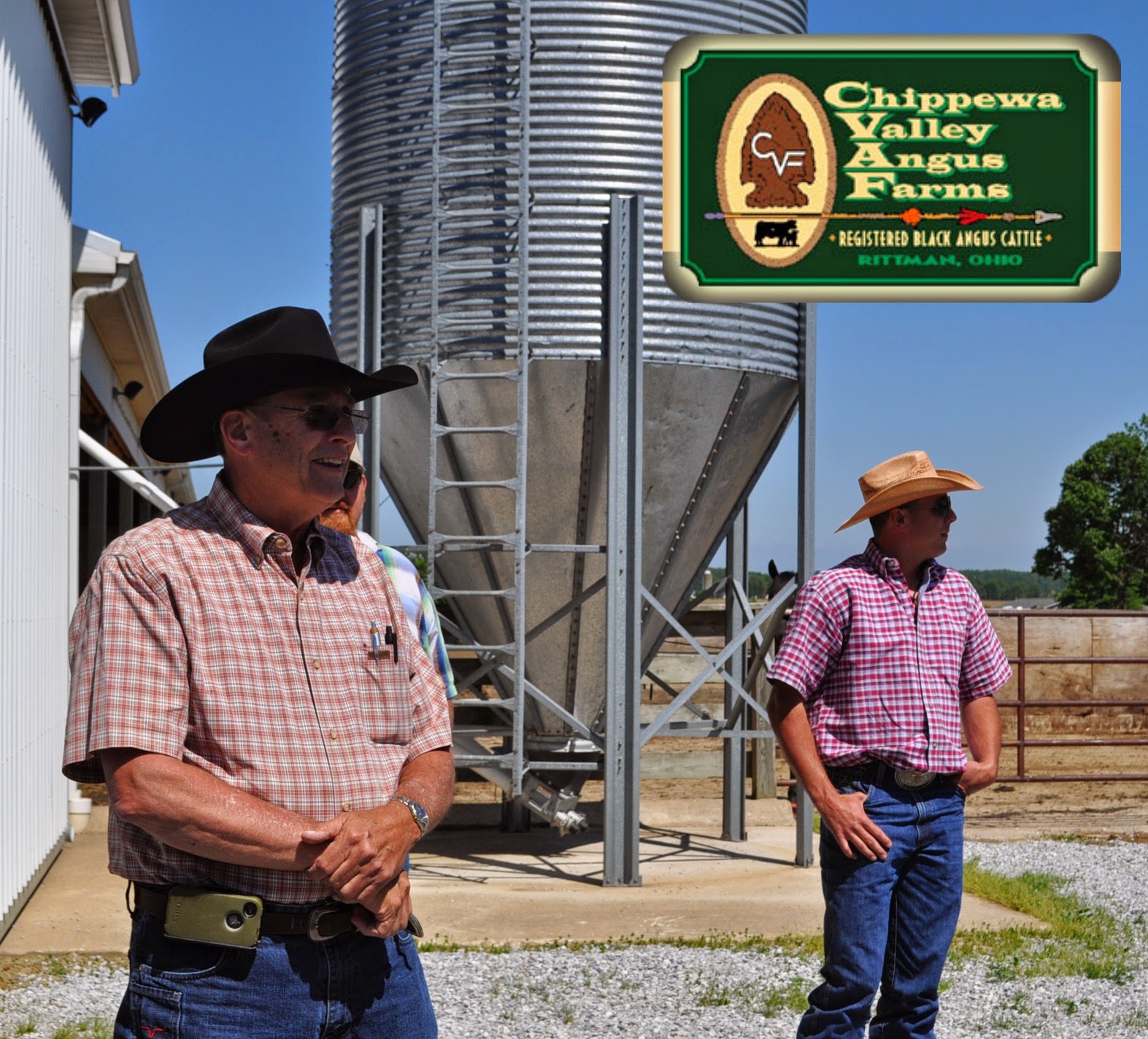 After checking in at the hotel, we hopped on a bus out to the Chippewa Valley Angus Farm. Cows!!!! When we got off the bus we met the owner of CVAF – Rod – and his cowboys. Seriously – all the girls went “Ooooooh cowboys!” It was pretty funny.

Rod and his two ranch hands run the farm and raise “seed cows” – which are the cows that make the babies for all the cows of the world. People buy their cows to make more babies or to grow into cows we eat. They were very patient and knowledgeable with all of us. (Besides me – there were other bloggers and journalists on the trip.) 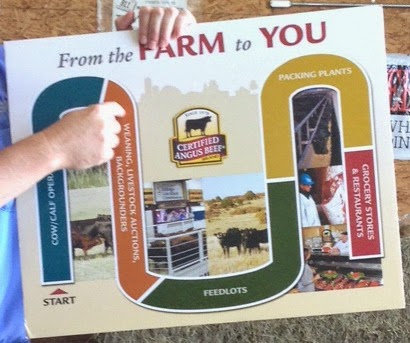 With all the hype around natural and organic – combined with the videos and issues around animal cruelty – these guys got a LOT of questions. I have to commend them on how they dealt with the fire drill that was us.  We learned so much! Here’s a few things:

I learned a lot more – but that’s a bit of the knowledge that was dropped on us. But – after grilling them for a couple of hours – they decided we needed to see some cows 🙂 Woohoo! 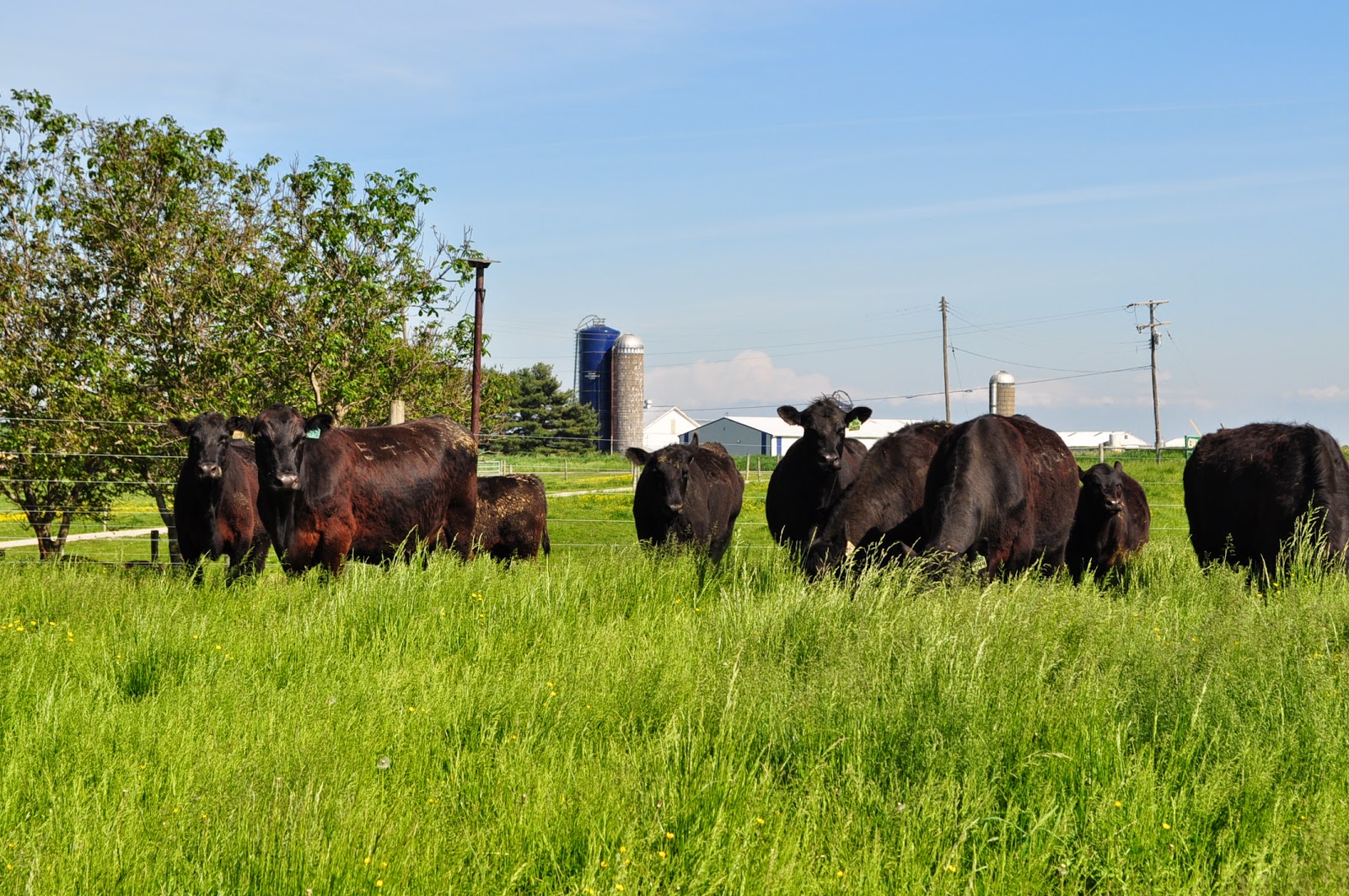 We literally saw cows running in the pasture! There is something about the country – it just smells better. I’d rather smell manure in the country – than exhaust in the city any day. I could have just sat on a lawn chair in that field all day – it was just beautiful. 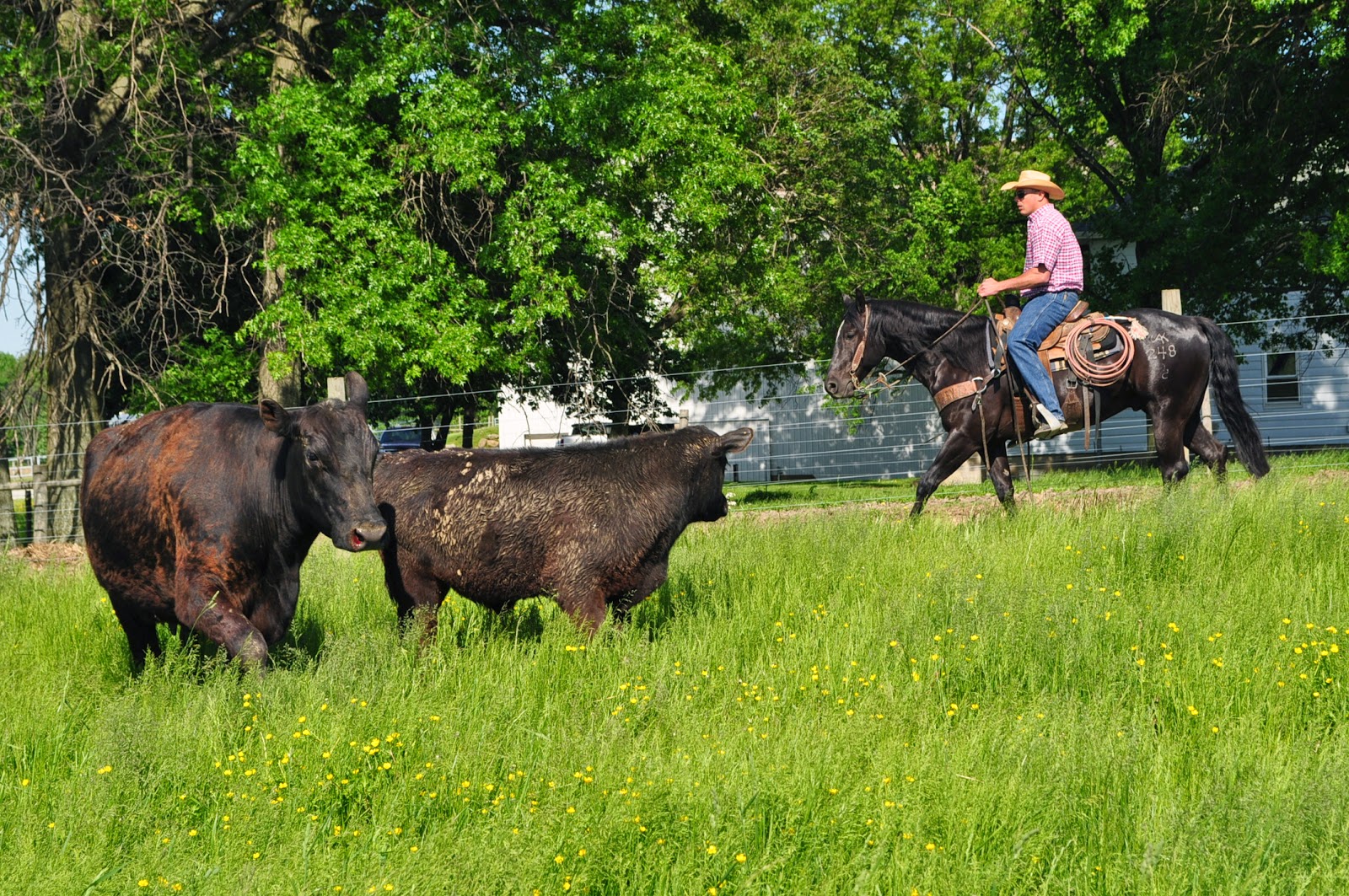 We also got to see the cowboys in action – herding the cows and bringing them toward us so we could get a closer look. 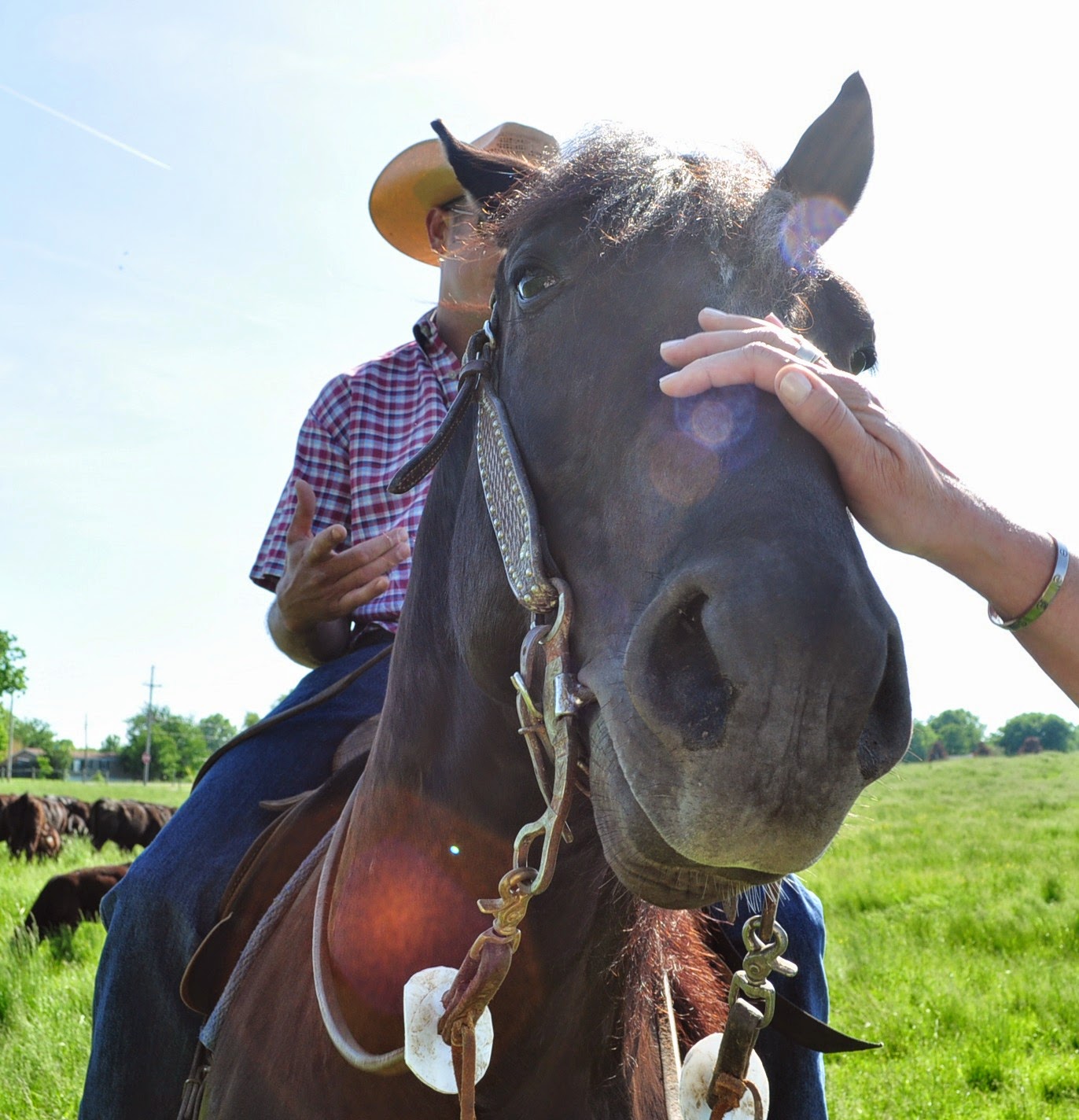 This is Jet and I love him (the horse not the boy). While everybody else was in the field admiring the cows – I decided to snuggle with the horse for a bit. He was so sweet!!!

After our fill of cows – we headed back to the hotel for some down time and then – back out again! 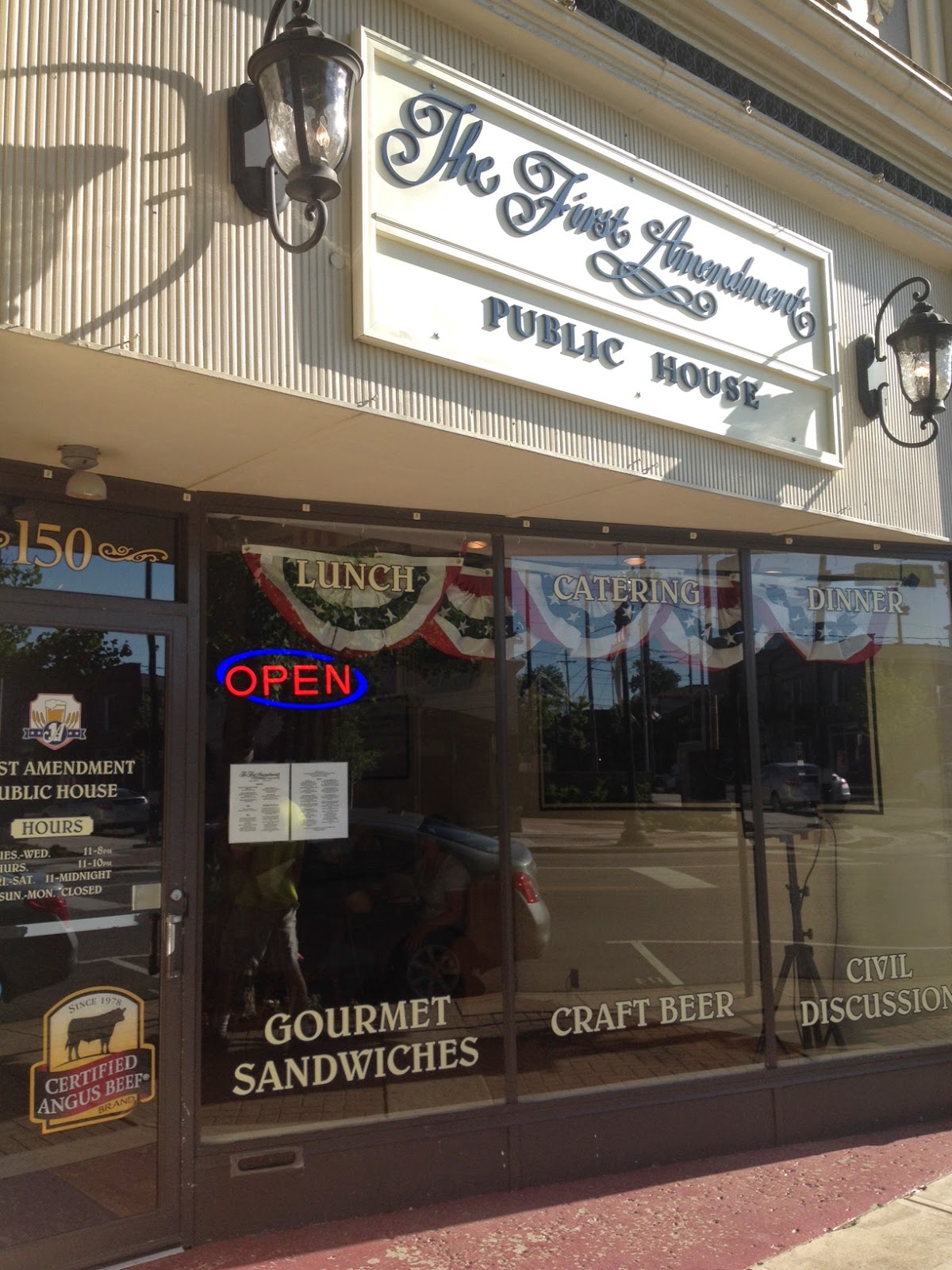 Before dinner we decided to walk around downtown a bit and stopped in at the First Amendment Public House. They had that Certified Angus Beef logo on the door – so we had to check it out! 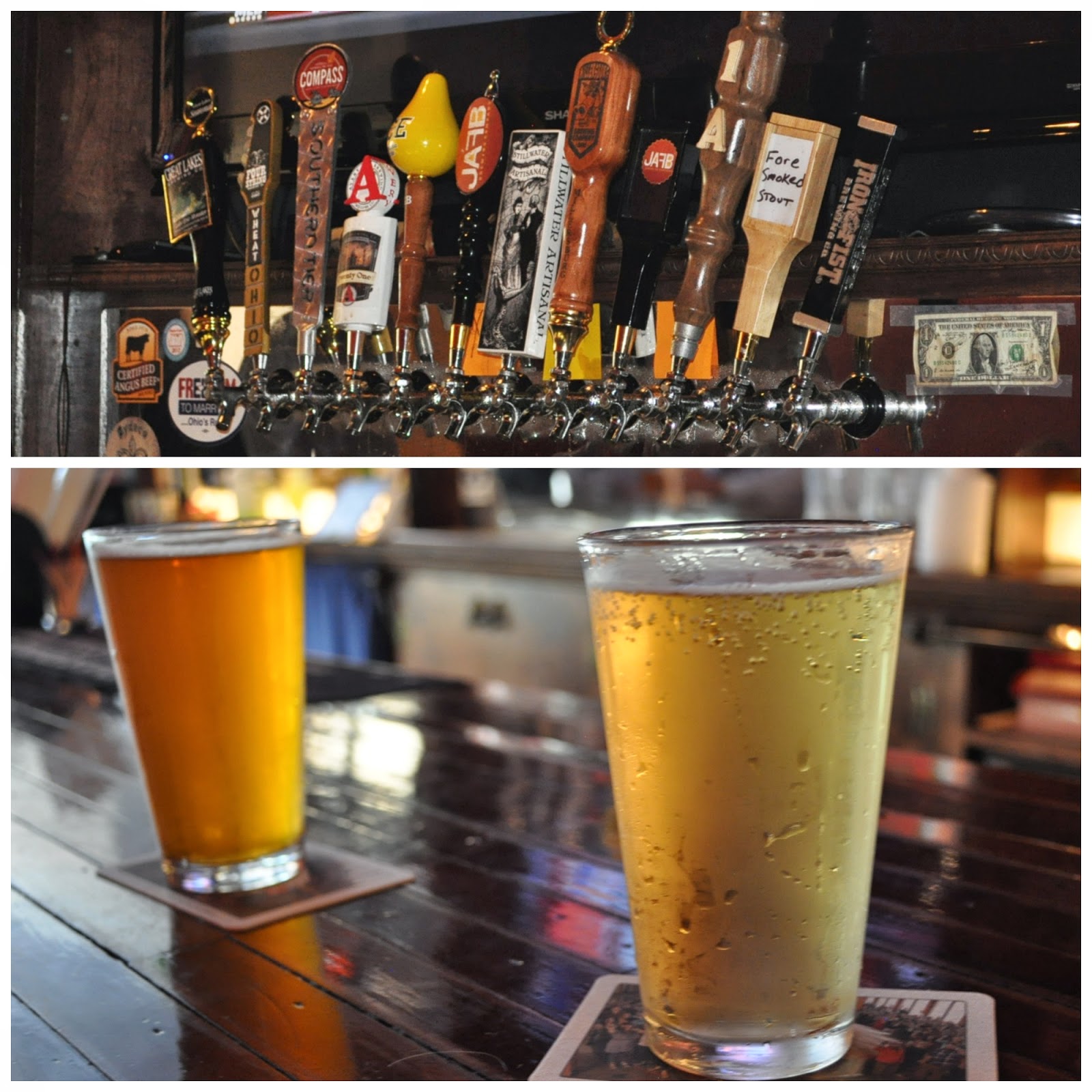 They had a ton of craft beers on tap and we decided to check them out. Larry tried an IPA while I went with something light and fruity. The staff was really nice and the food that came out for other folks looked AMAZING!

But we didn’t eat there because we had a big ol’ steak waiting for us! 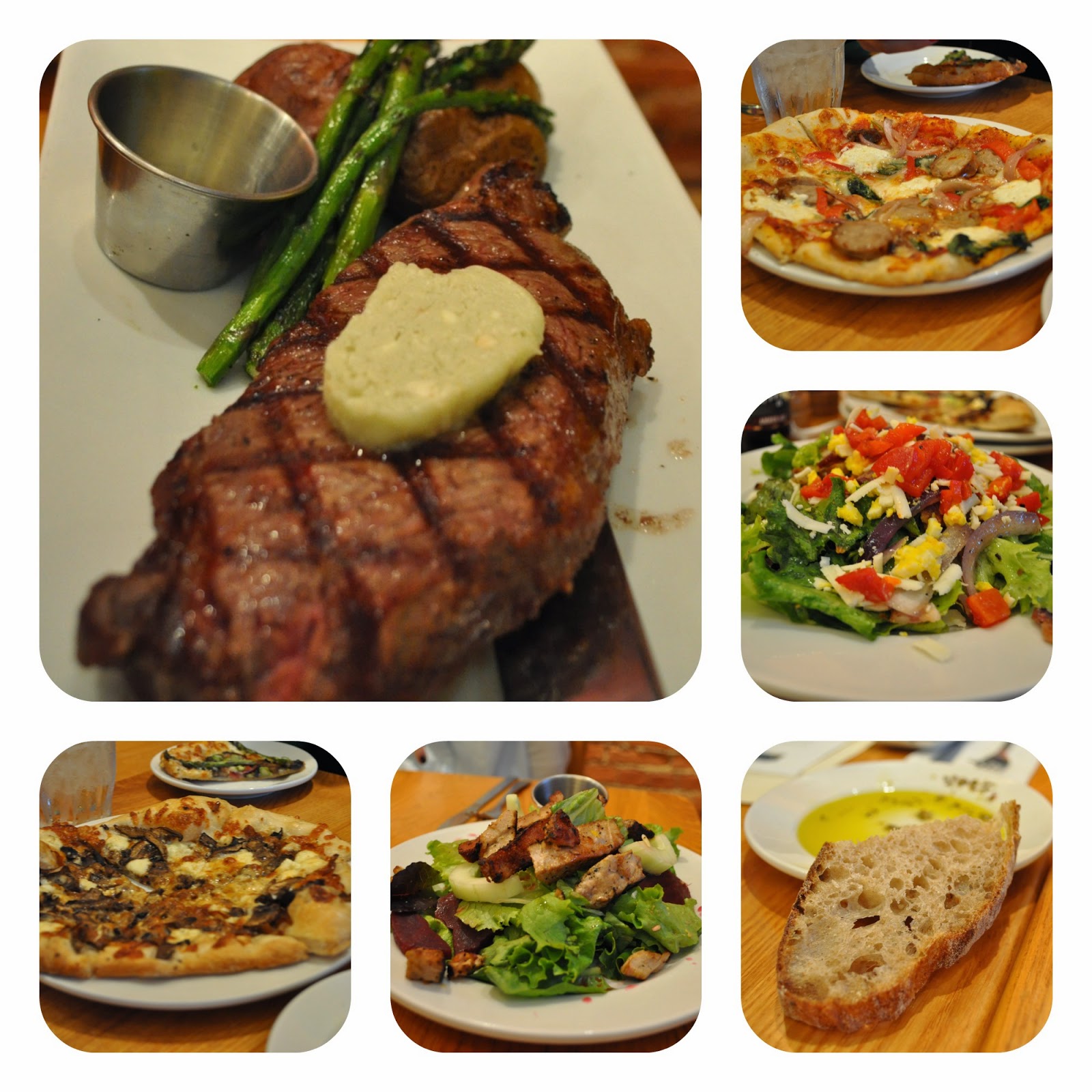 We went to Broken Rocks Cafe and were showered with lots of delicious food. Everything was homemade and so good. We started with bread & olive oil – then moved onto pizzas! Hand-crafted dough – my favorite was the Italian Sausage because it had some dollops of goat cheese on it. Yum! The salads were great too – Larry even tried beets!

He ordered the Certified Angus Beef New York Strip. As we found in a recent steakhouse trip – he likes NY Strip and I like Ribeye. He really enjoyed it – even the blue cheese butter – although he said, “That stuff is a bit funky.” Haha – yes, yes it is. 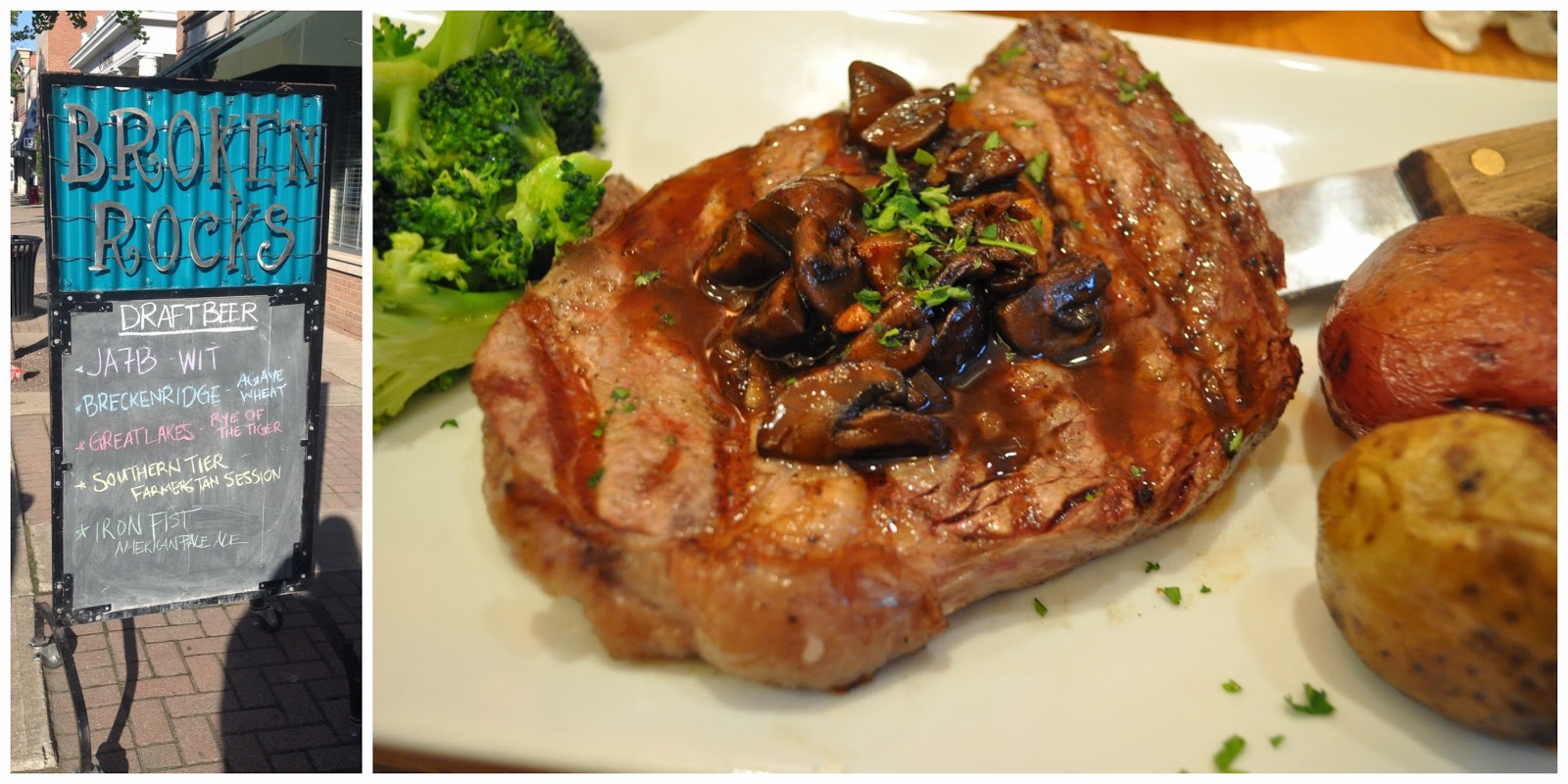 I went for the Certified Angus Beef Ribeye and it was delicious! It was soft and buttery and just amazing. Broken Rocks was an amazing host for our dinner and the food was all delicious. I would definitely go back.

All in all – it was a great first day full of beef! We learned as much as we ate – which is a good ratio for me. 🙂


Disclosure: The Certified Angus Beef Council provided this trip for us but all opinions are my own.