I loved going on the Indy food tour and sharing it with you guys last week! We also had some time on our hands during the day before the tour so we stopped for lunch at Chatham Tap in Fishers. 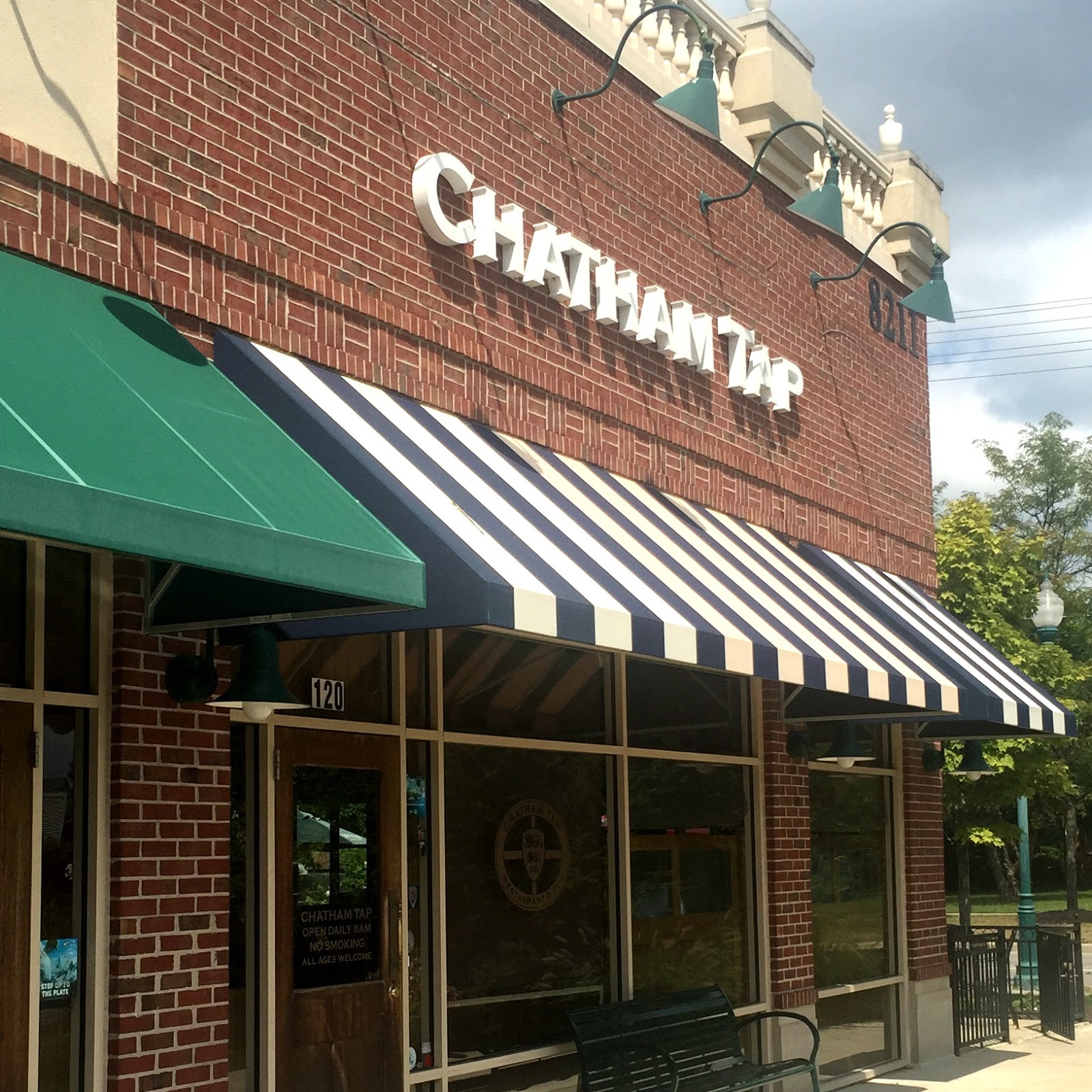 Chatham Tap is in a fancy strip mall of sorts with lots of shops and restaurants. It’s the place to go to watch soccer in the area and they really want to bring that English Pub experience to Indianapolis. 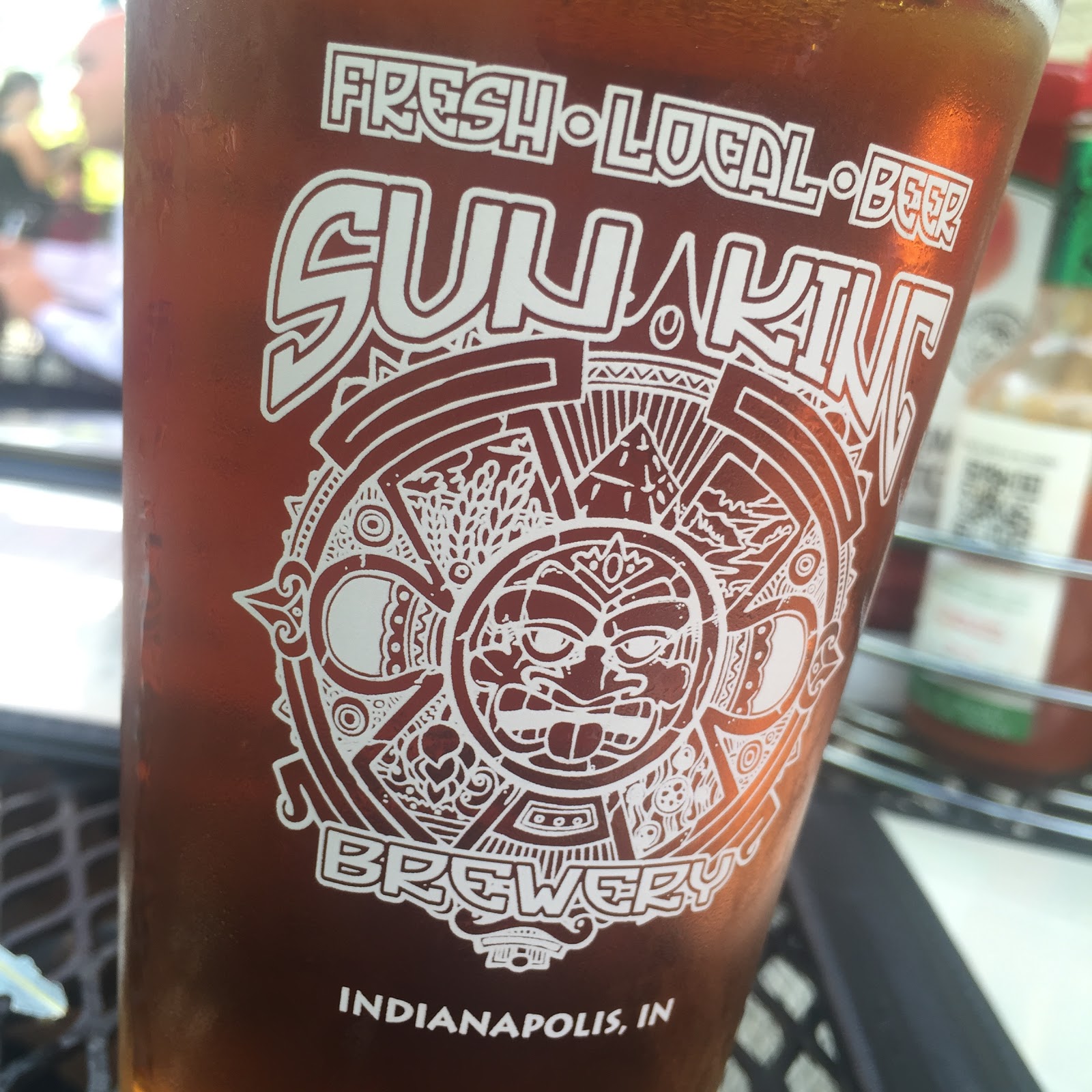 Their selection of draft beers is pretty great – ranging from English beers with names like Wychwood Hobgoblin to locals like Sun King out of Indy. 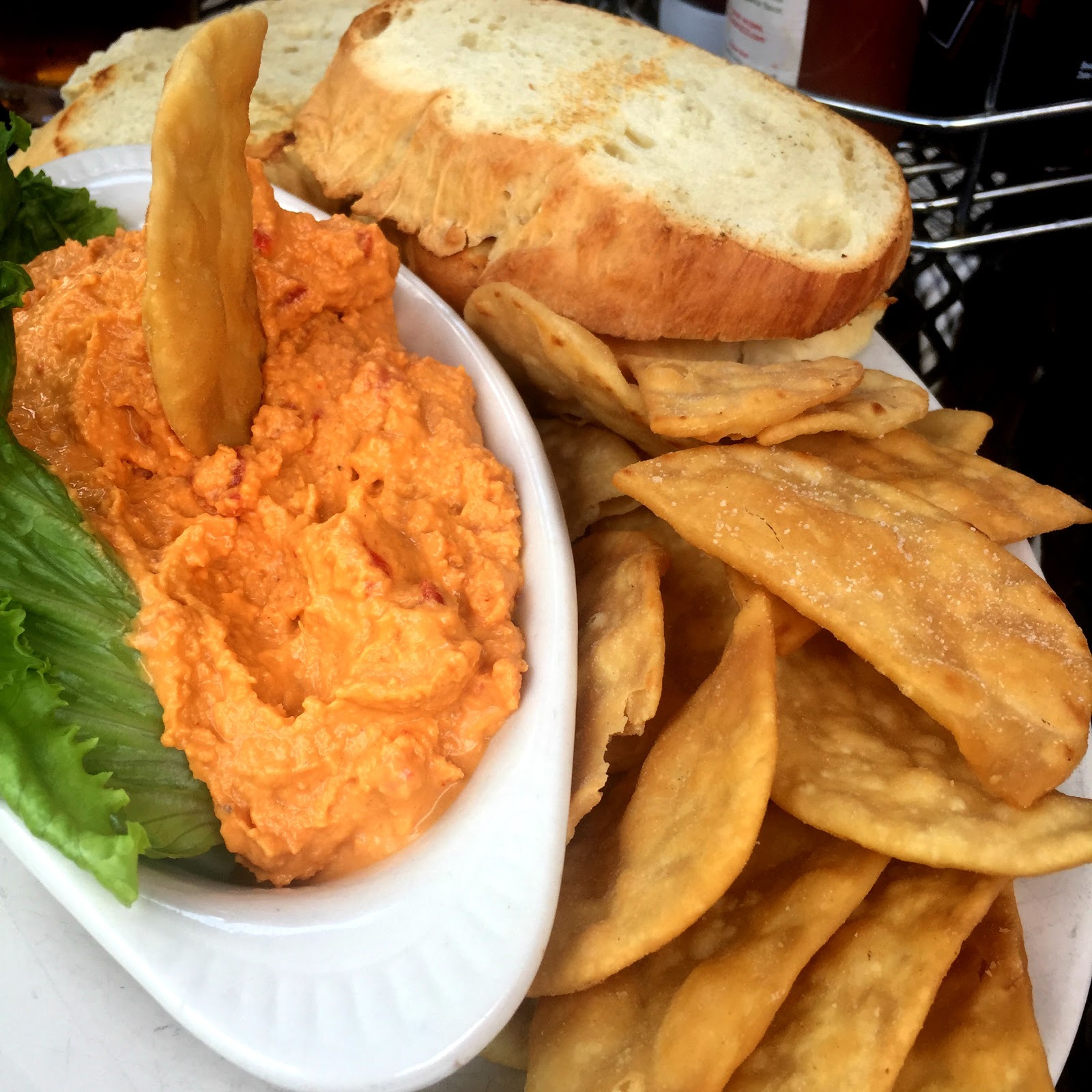 Larry was starving so we ordered up some hummus ($7.99) which is housemade and served with pita chips and parisien bread. Larry was obsessed with the bread and I have to admit – it was pretty awesome. The hummus was very thick and it was a really large portion. 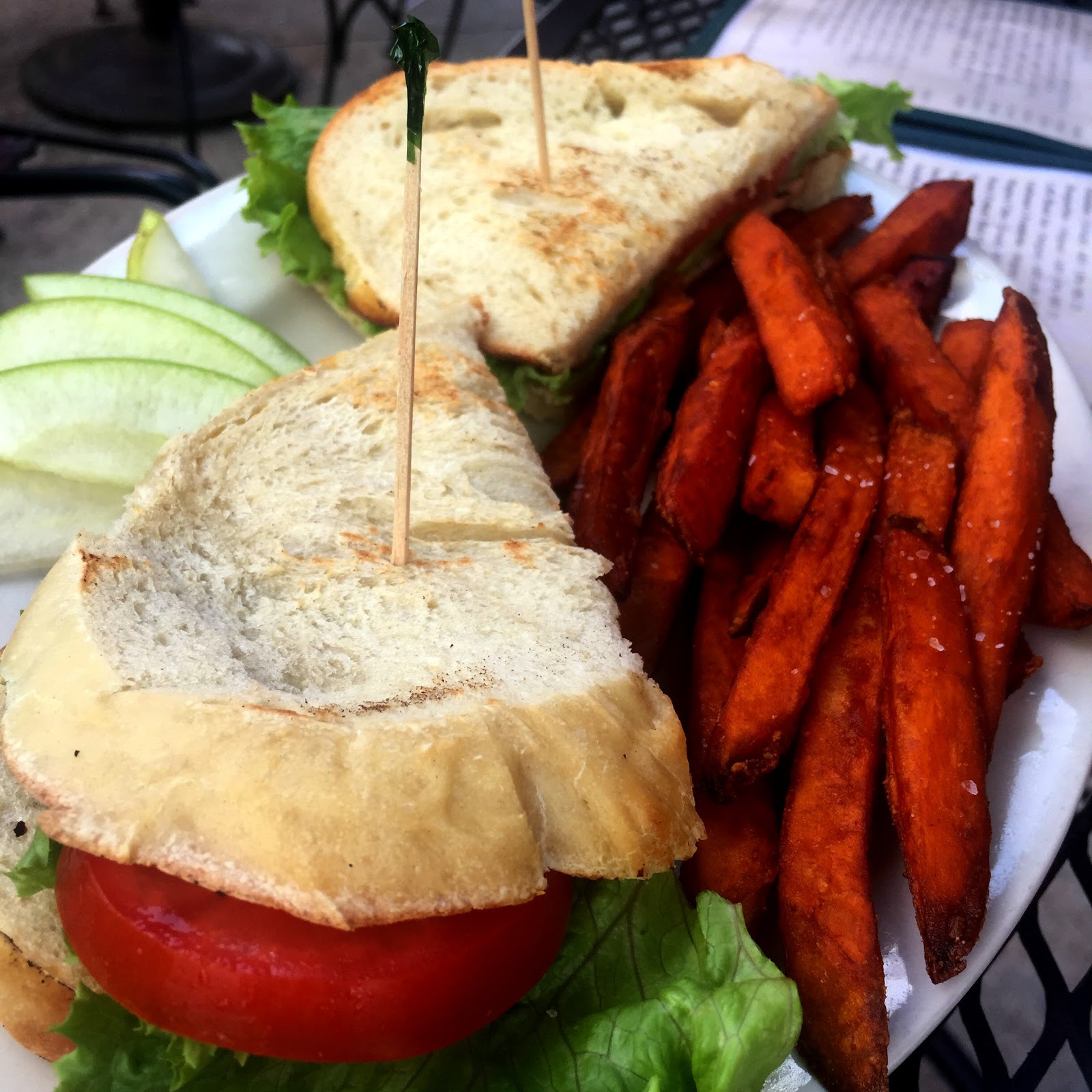 Upon recommendation from the server – he ordered BLT ($6.99) which comes with Rasher bacon. It was also served on the parisien bread with a side of sweet potato fries. It was very different than what I think of as a BLT but Larry really liked it. 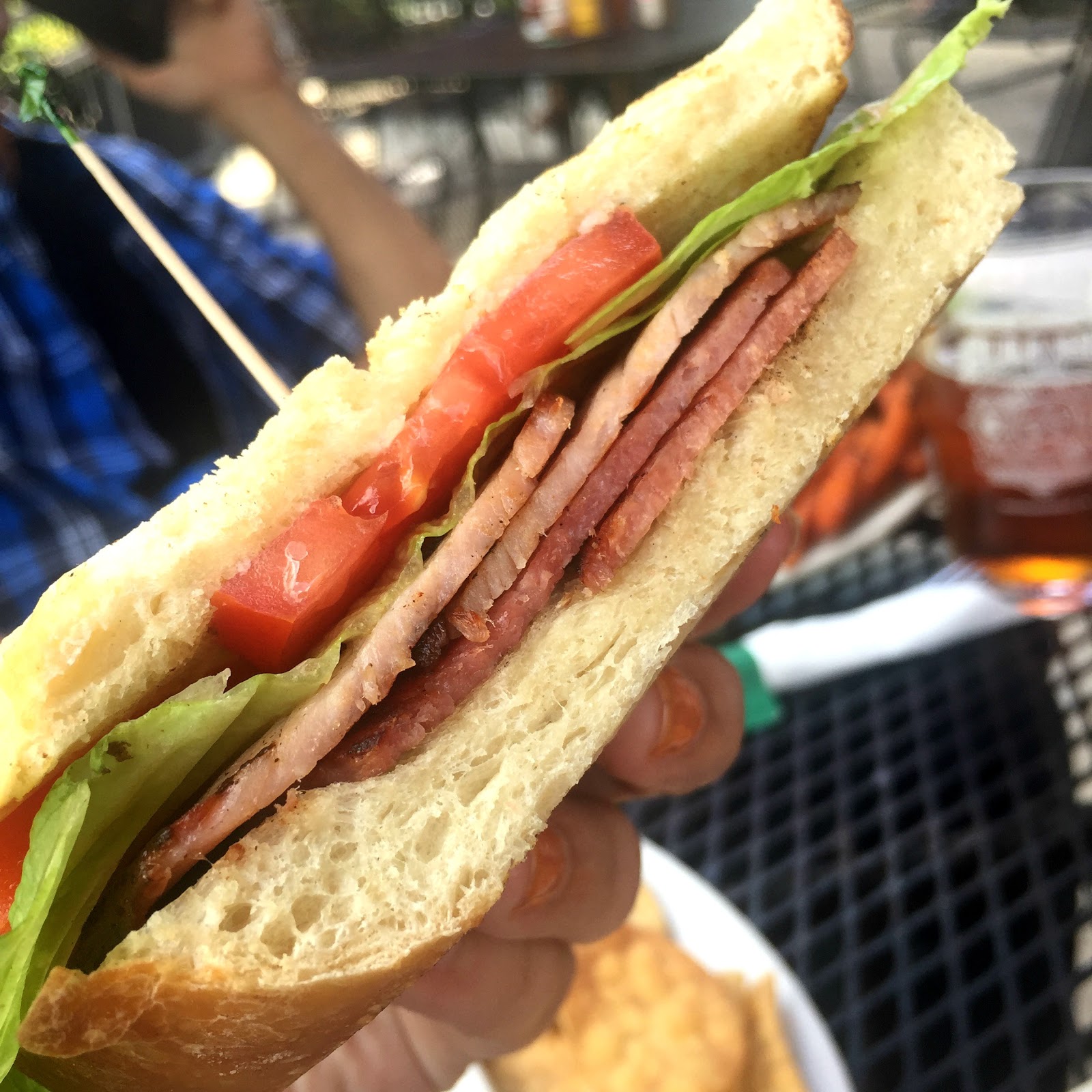 Rasher bacon – after visiting my friend Wikipedia – is from the loin section and is also referred to as a thin, floppy slice of fatty ham. The server said it was English bacon and more like Canadian bacon. 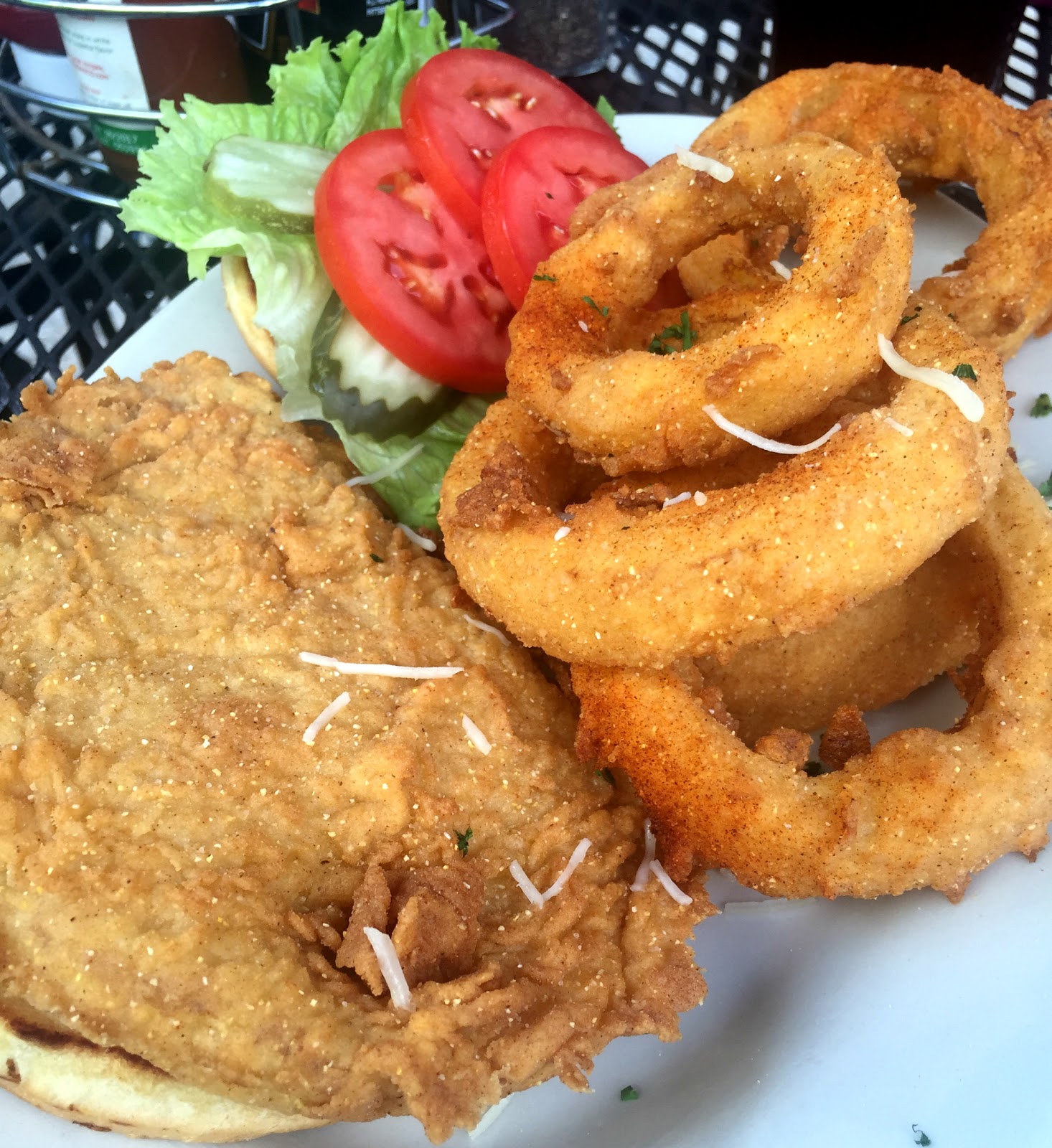 I went for the Garlic Pork Tenderloin ($7.99) – it seems the closer you get to Iowa – the more rampant pork tenderloins are on menus! I chose onion rings as a side – it is an upcharge for fries or onion rings. Sandwiches come with homemade chips, coleslaw or cottage cheese free of charge.
The pork tenderloin was thick and definitely made in-house. The garlic wasn’t overpowering and it was very juicy. Honestly – the sandwich was a bit more than I could handle just in sheer size. The onion rings were almost coated in cornbread. I didn’t love them.

Why Should You Go? All in all – it was definitely a hit – it’s cool to find a place that seems like it might be run of the mill and then to come out satisfied and knowing you’ve had something unique.

Next up, we headed to Conner Prairie Interactive History Park – I love these kinds of places and was happy to drag Larry along with me. 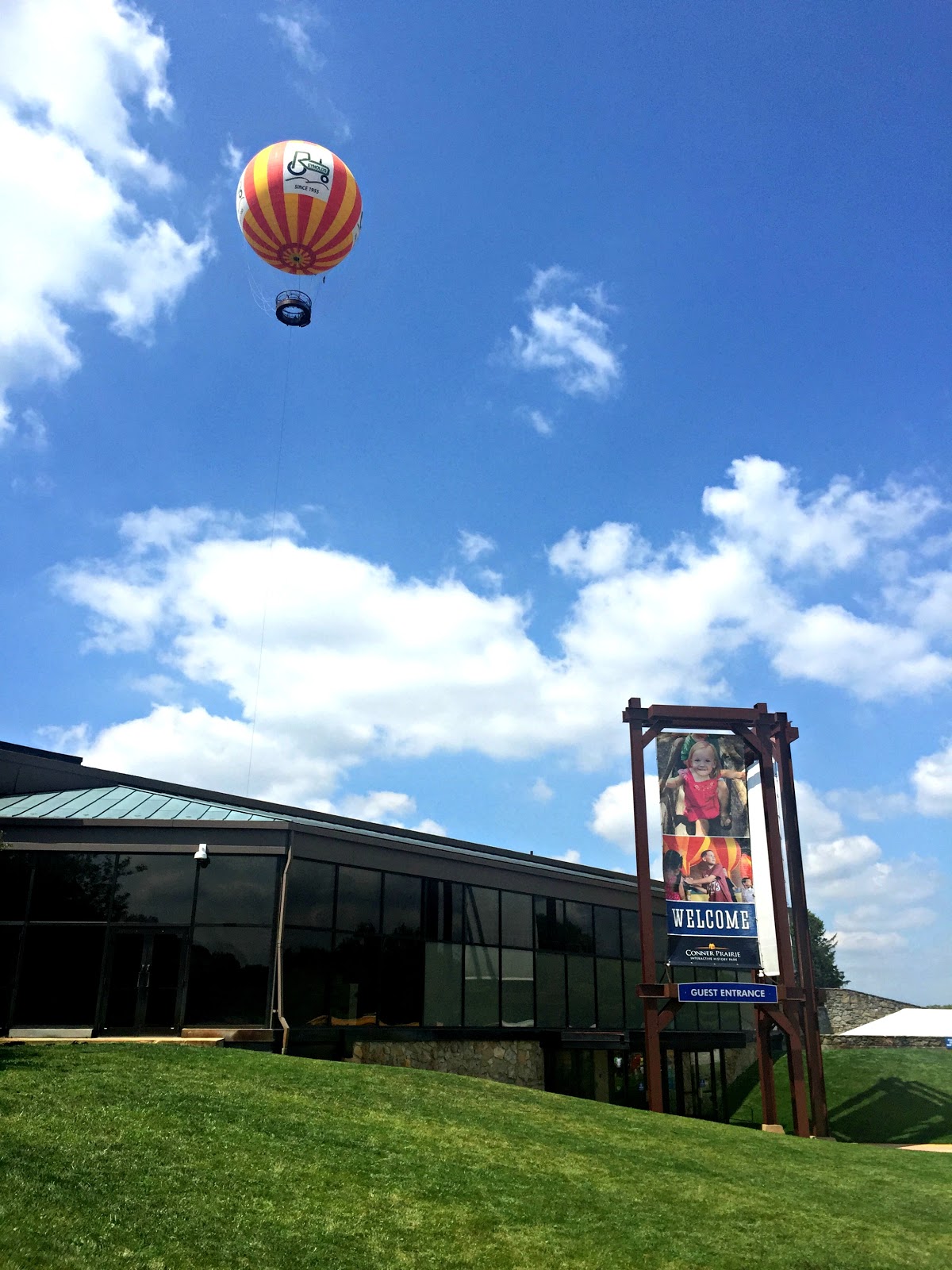 It’s easy to spot on your way because many times the giant balloon is floating overhead! Admission is $16 but there are discounts for seniors and children as well as coupons online. 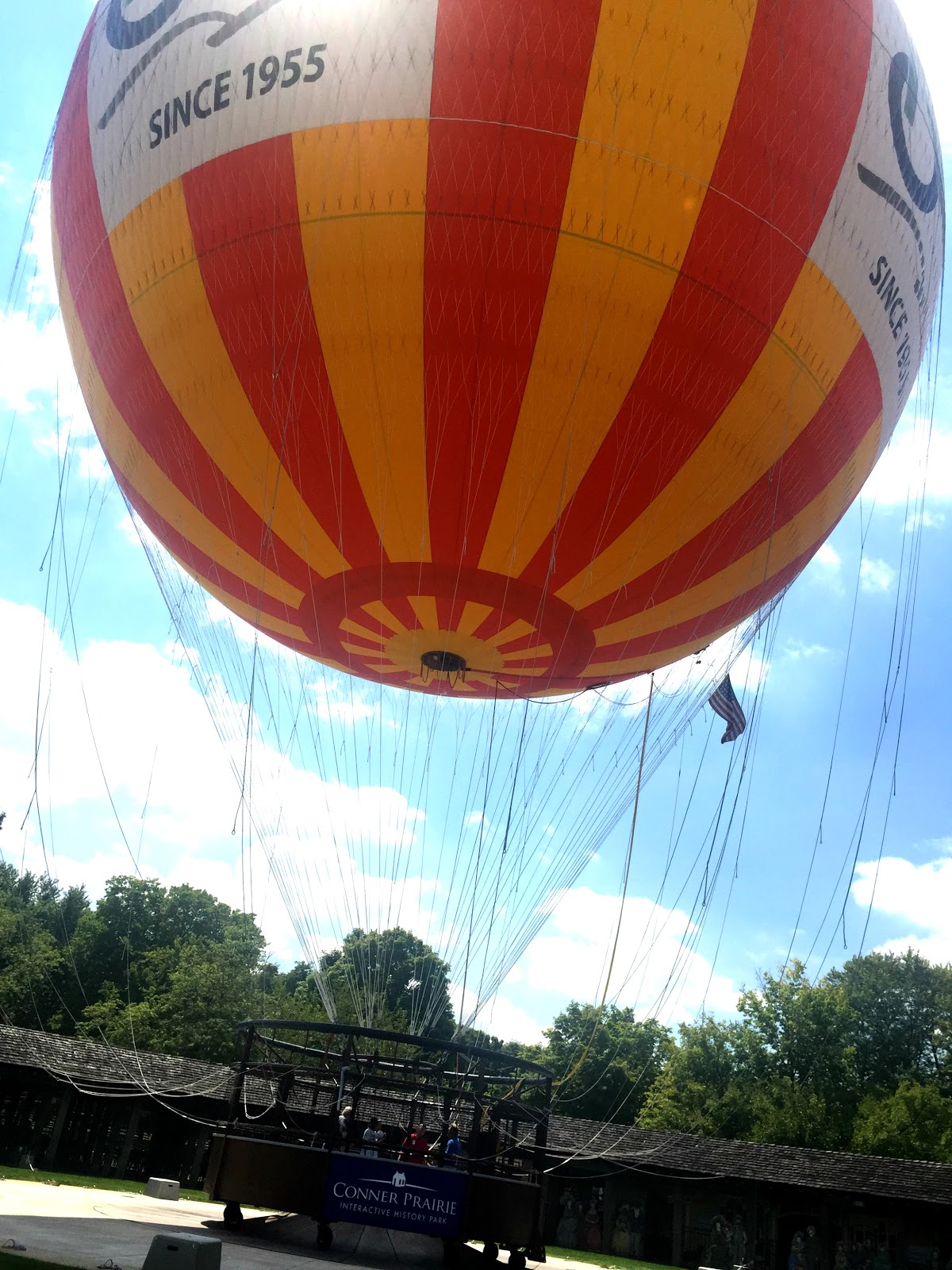 So what’s the balloon? It’s the 1859 Balloon Voyage – it’s tethered down and you (for a $15 ticket) can get in the carriage and float up above the park for a while. We thought the additional price was a bit steep and it’s time consuming (about 45 minutes) so we decided to skip it. 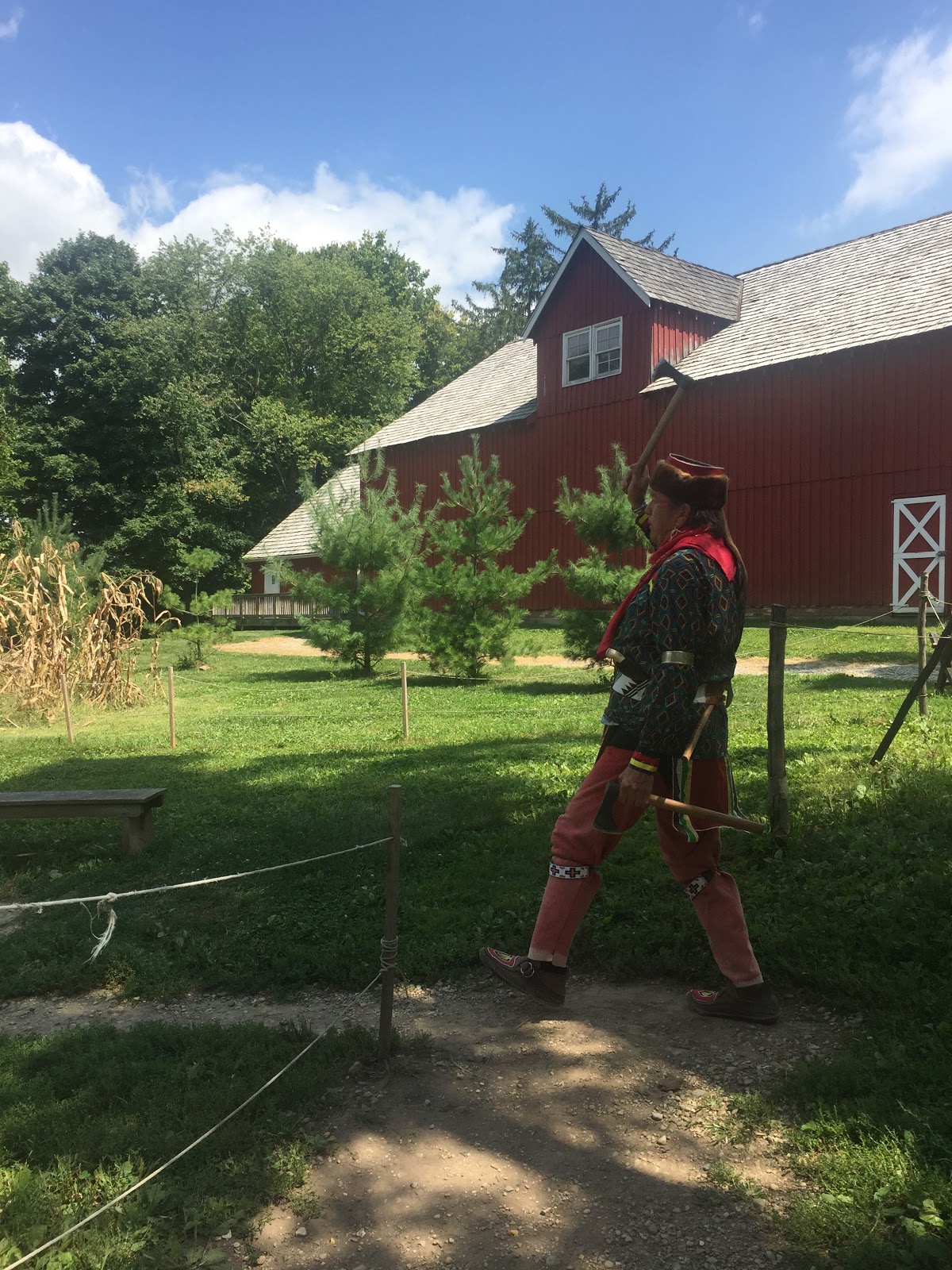 First we headed off to the Lenape Indian Camp and met an Indian Chief (seriously – he is) that was throwing tomahawks. He offered to teach us how to throw and I jumped on it. 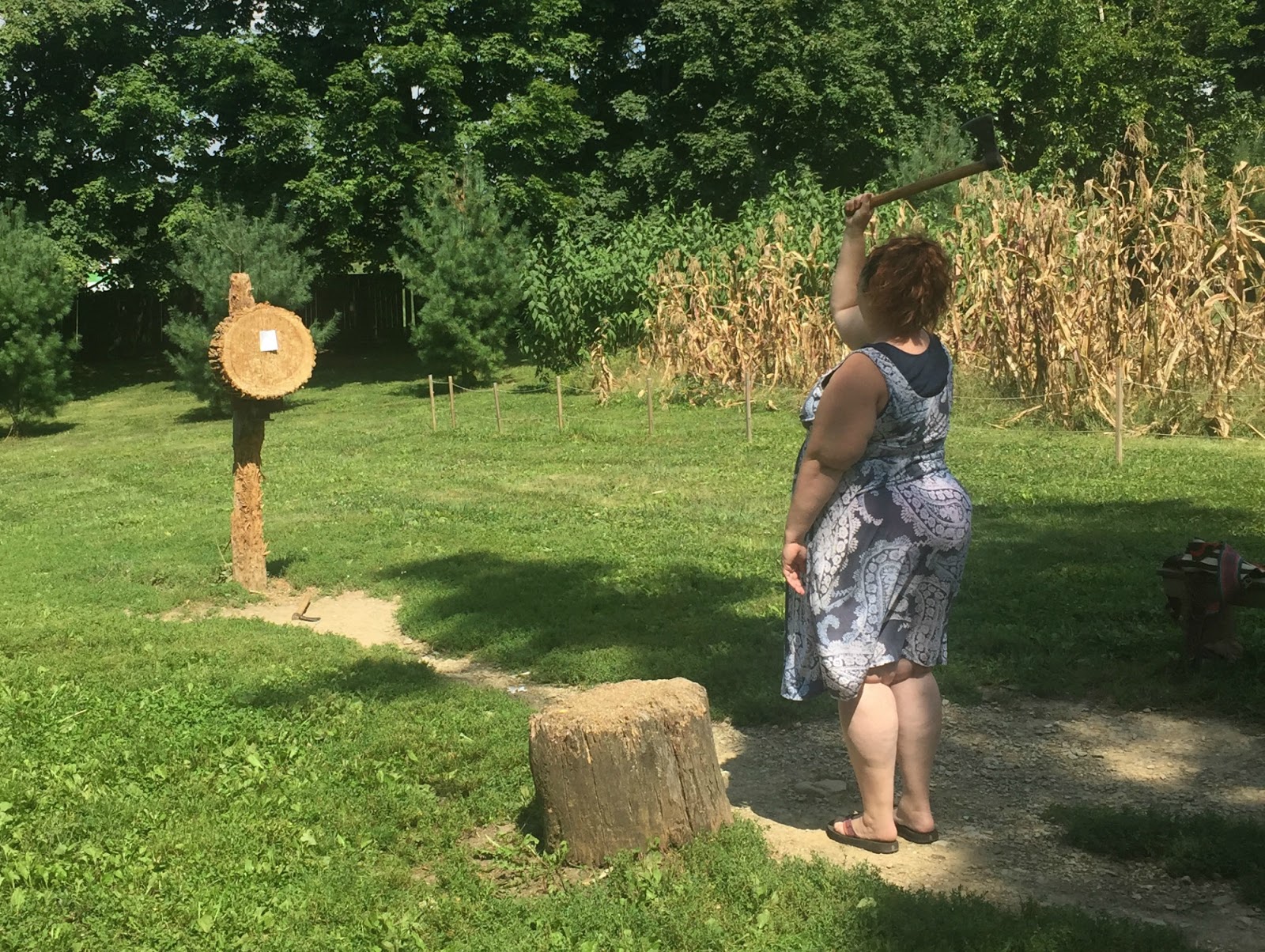 As I’ve mentioned before Larry is a terrible picture taker – I was hoping for more action shots but at least I’m in the frame – so I’ll take it! I was not successful in sticking the tomahawk – I hit the target every time – but couldn’t quite stick it. 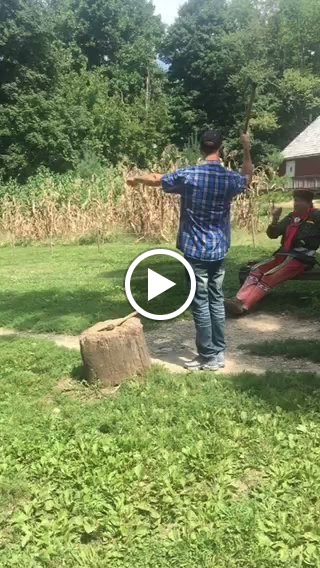 Larry, on the other hand, is a natural athlete. It took him a few moments to get the right form in place but when he did – perfection. Ugh – so annoying! 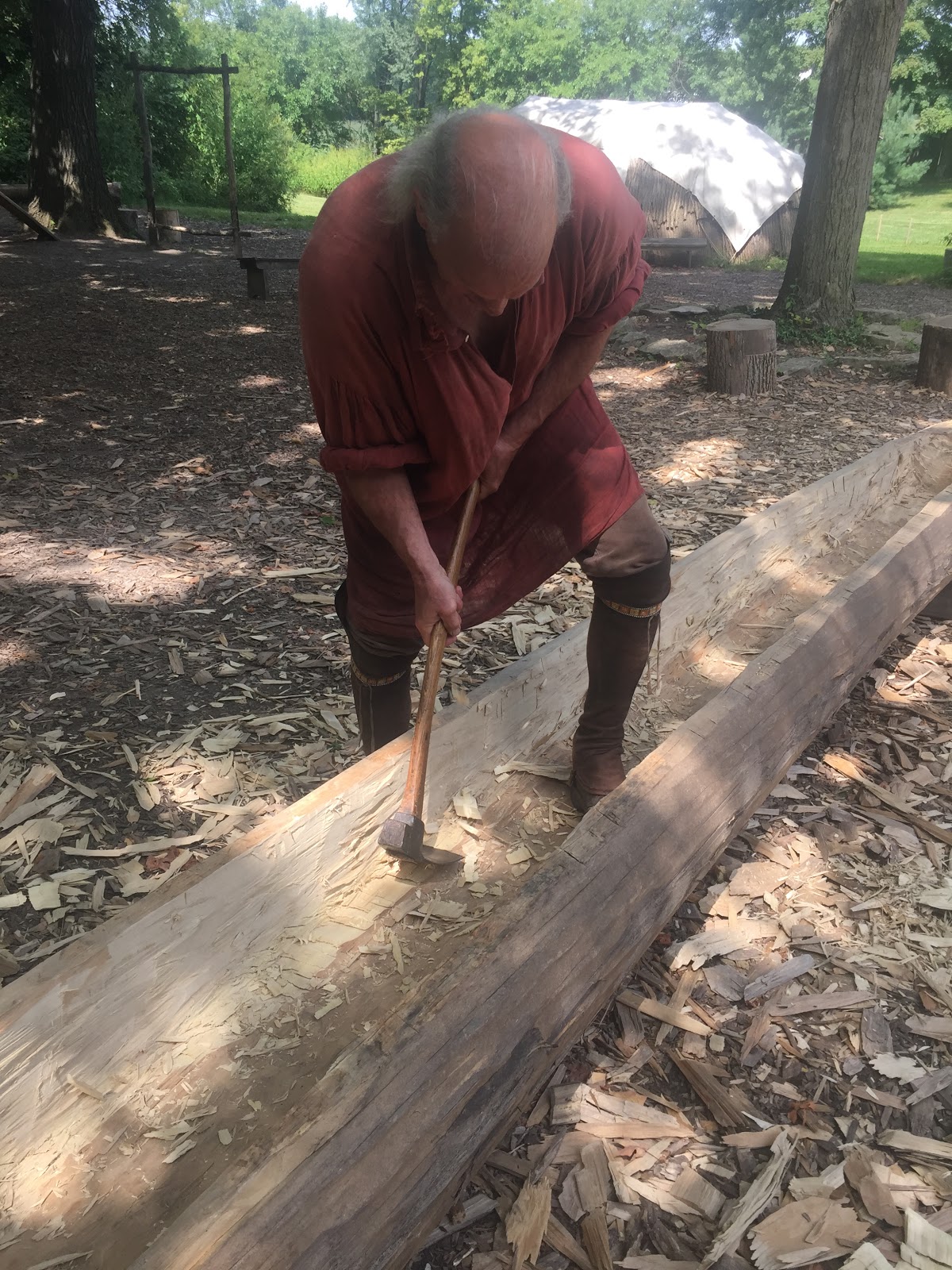 This gentleman was also there carving out this log. This looked like a super hard job – makes me very thankful for my Honda Civic to just get in and drive away. 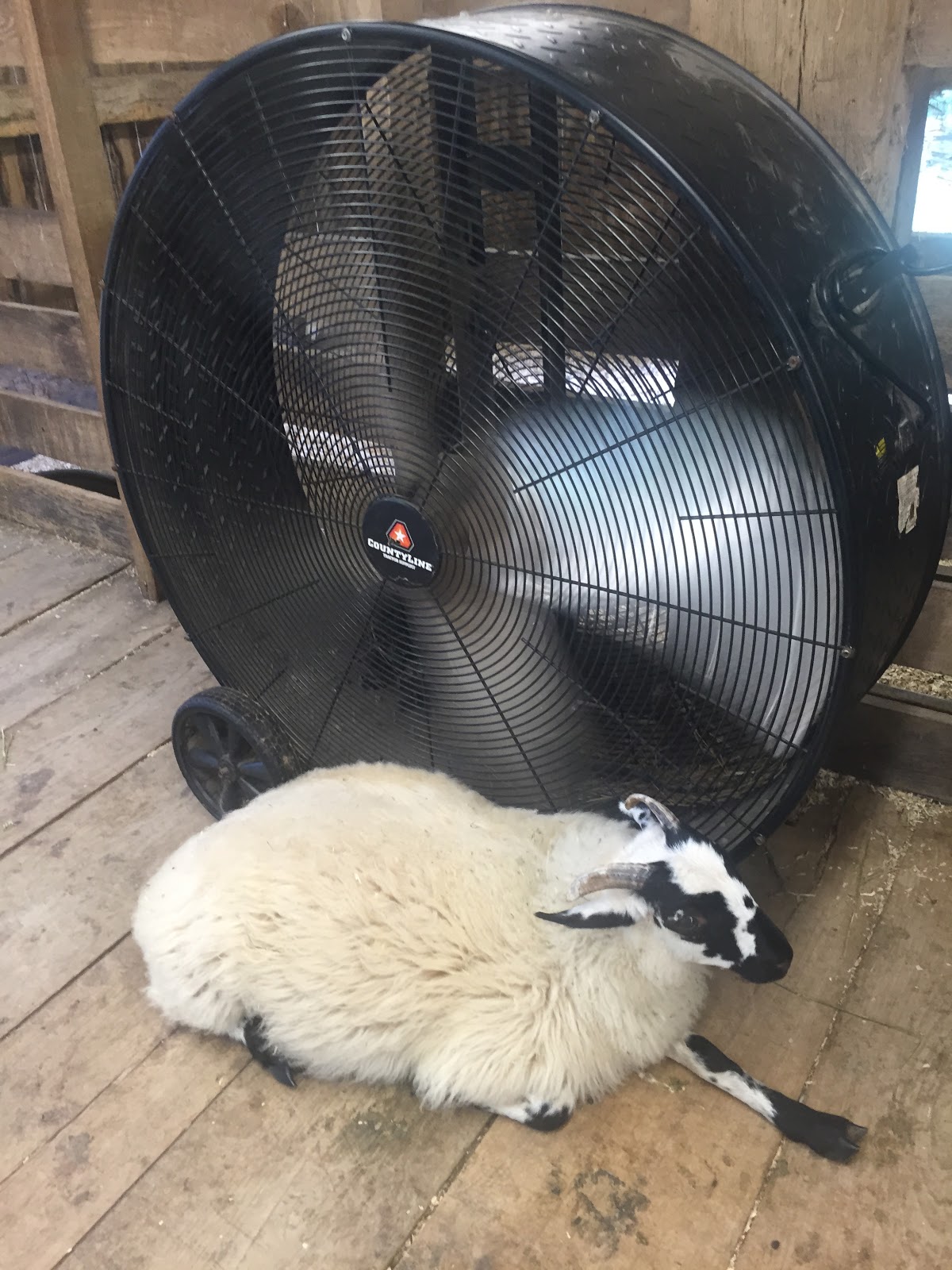 They also have animal encounters – and this guy completely had the right idea. I knew he was my kinda sheep.  There were lots of animals and I’m pretty sure that I pet every single one of them. It’s what I do. 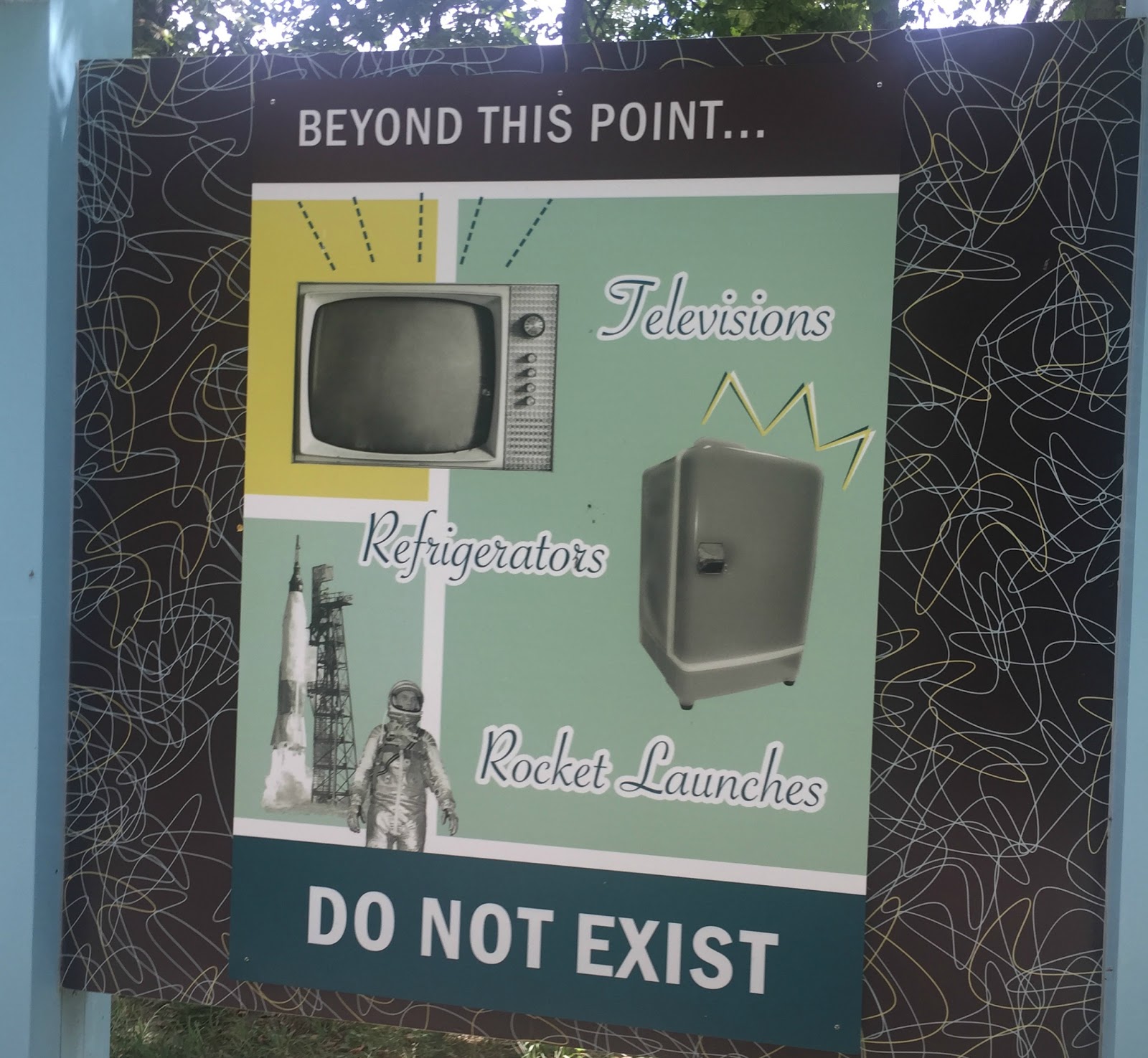 Then it was off to 1836 Prairietown – where televisions, refrigerators and rocket launches do not exist!  They have a whole little town set up where you can learn a trade, visit shops and play games. 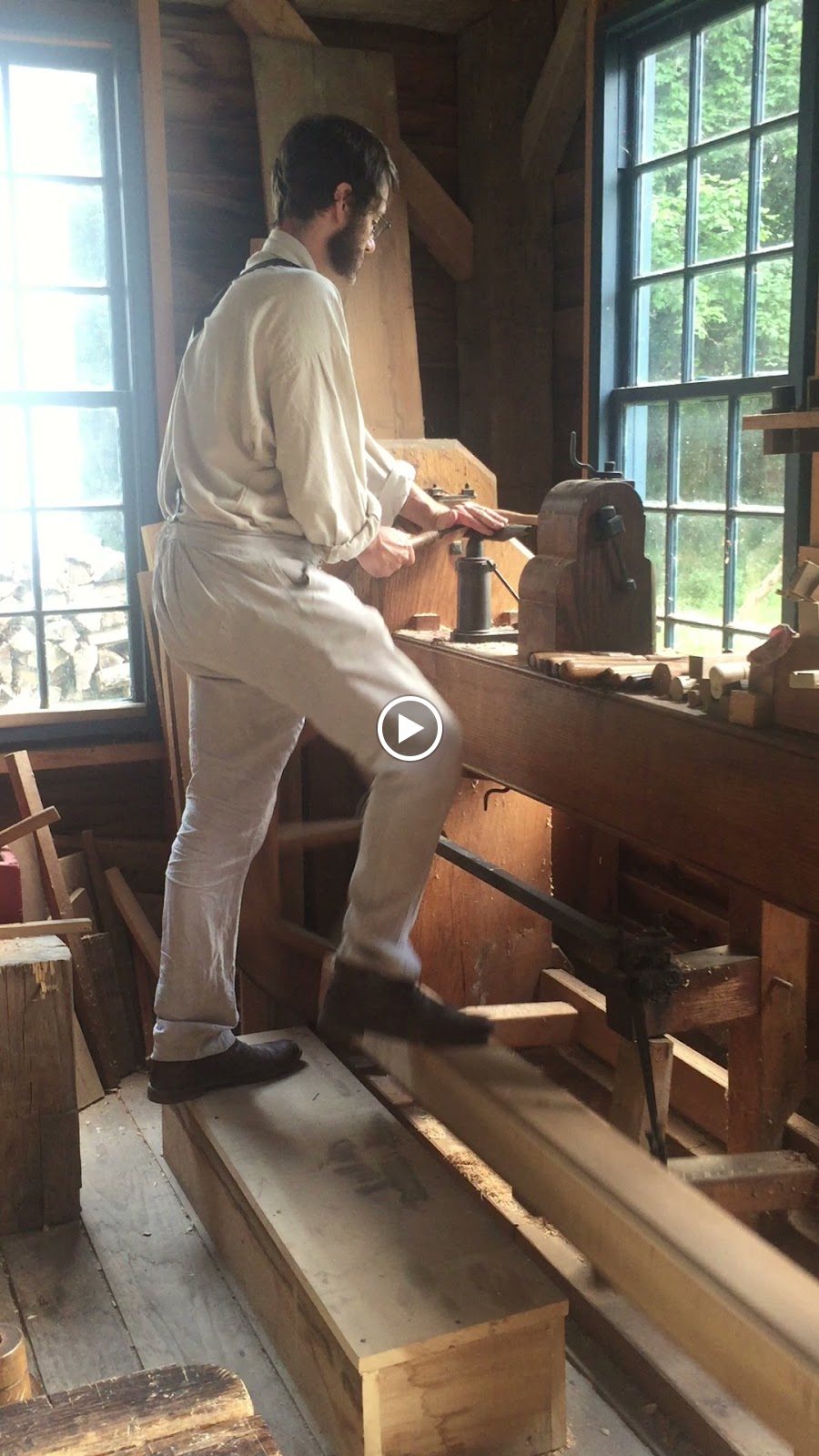 We stopped by the blacksmith and he was making a stool and showing us how his lathe works. Larry used to work at a cabinet shop and was really impressed with the craftsmanship. 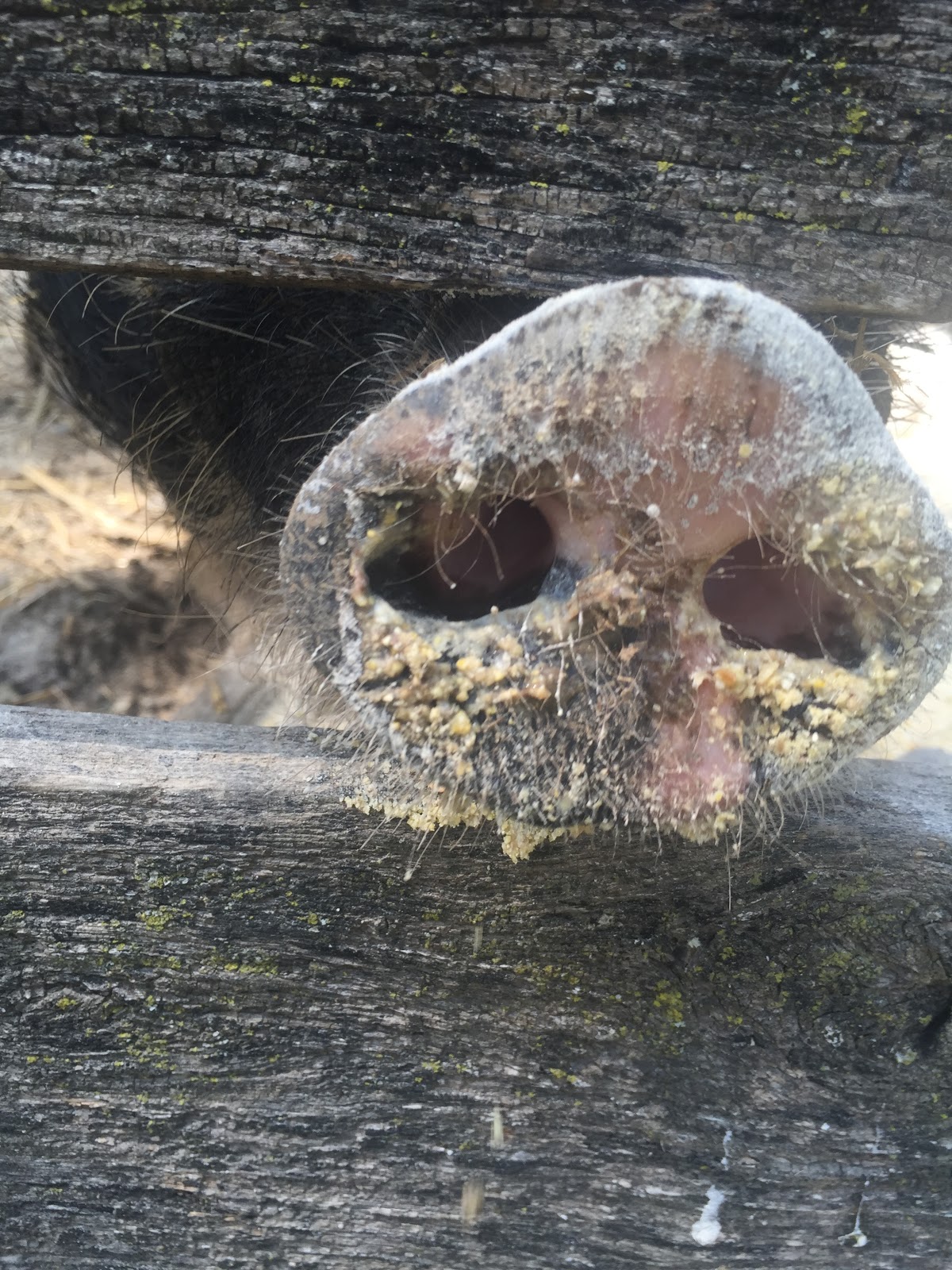 We wandered more and came across this nose – or snout – sticking out at us and were very happy to stop and give him a pat on the back. 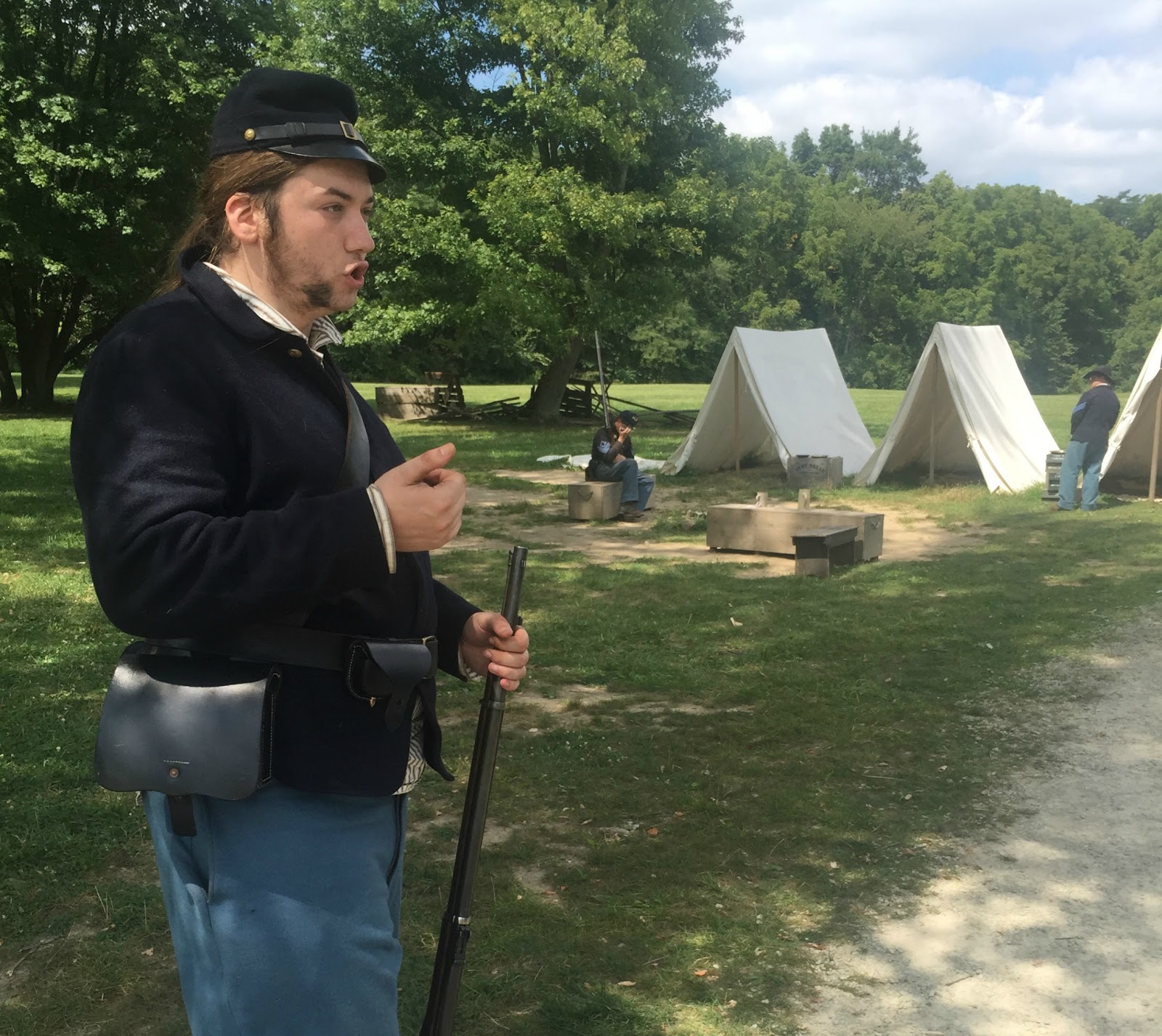 Finally it was our 1863 Civil War Journey – where we met Civil War soldiers.  Everyone is in character fully and has no idea what our cell phones or Nikes are. This gentleman was a big help and pointed us in the direction of the home on the presmises. 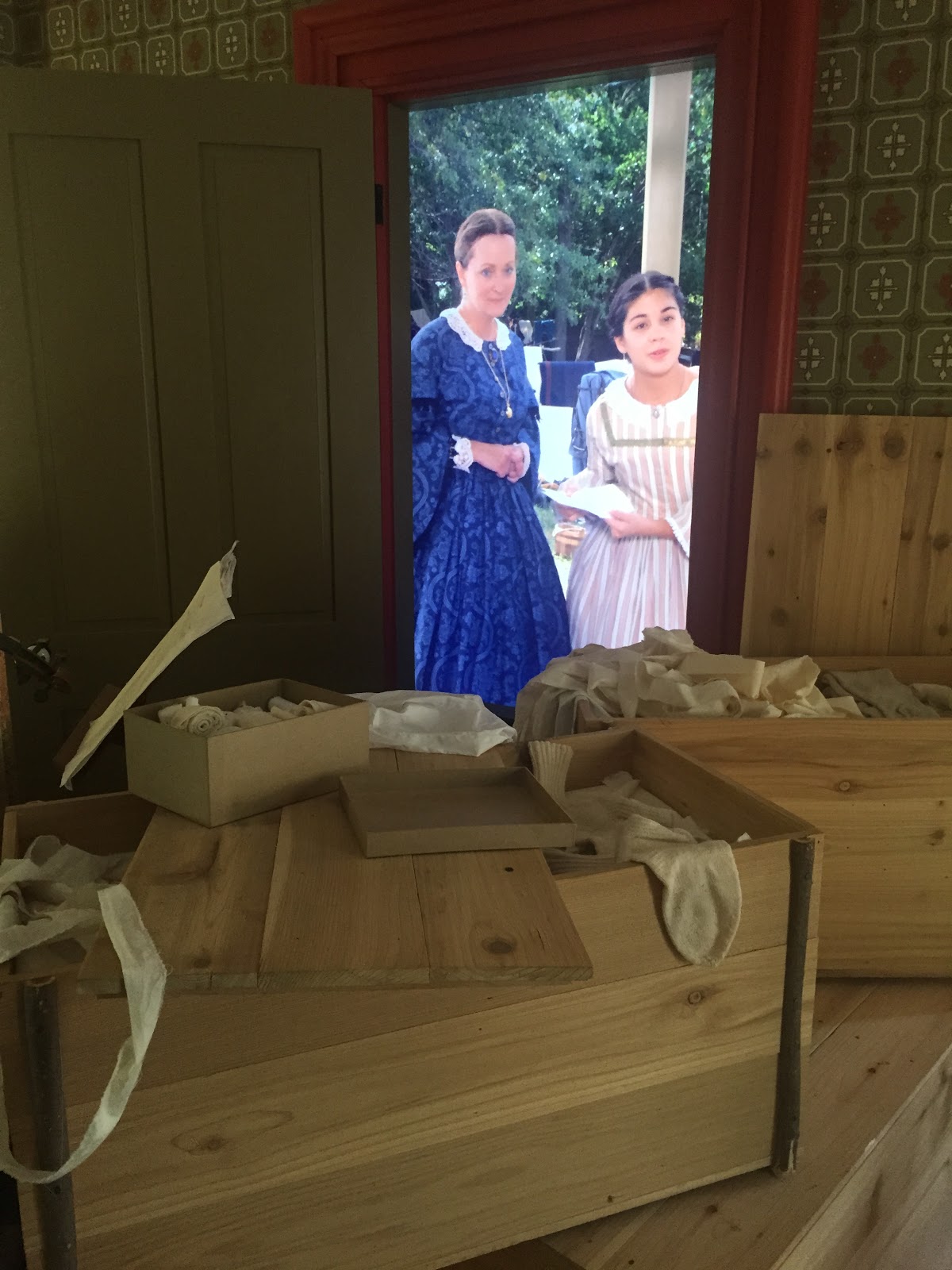 They had a really cool interactive area that had a room with a video screen that would start playing when you walked by. They had holograms in other rooms – it really seemed real. Pretty nifty stuff. 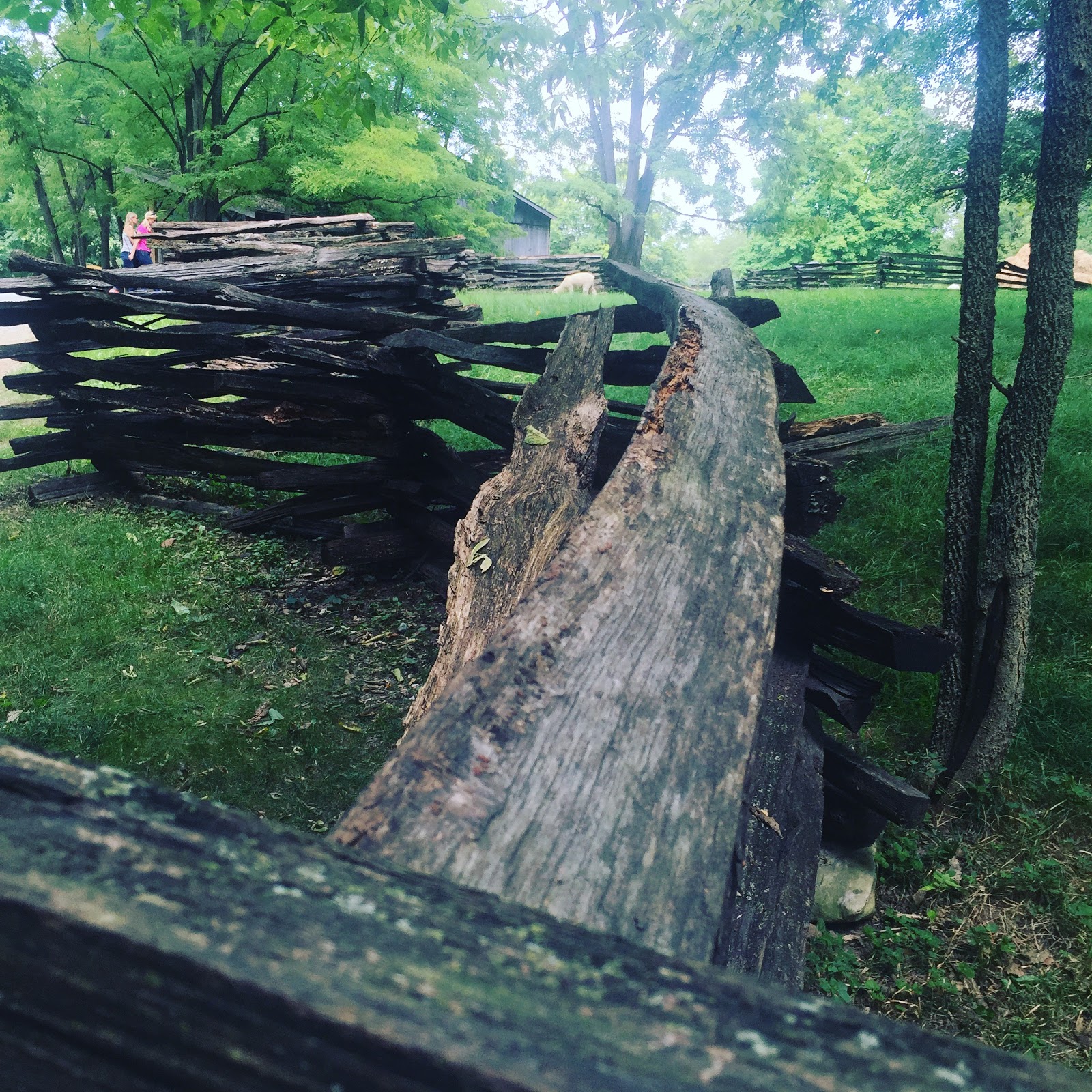 All in all – the property is really pretty and we had a great time walking around and learning a bit. It’s a little pricey but there are discounts online to bring it down.

We paid for the lunch and park admission – but the food tour later was thanks to the Hamilton County Tourism. We had a great time – thanks again!