Last week I started sharing the AWESOME time I had in Cleveland thanks to the folks at Positively Cleveland. They definitely made me #happyinCLE. Each week I’ll be sharing a new tidbit about something I did in Cleveland and some food I ate. I was really surprised at how much fun the city was and can’t wait to go back. It’s a great trip – even for a weekend – at only 4 hours away! 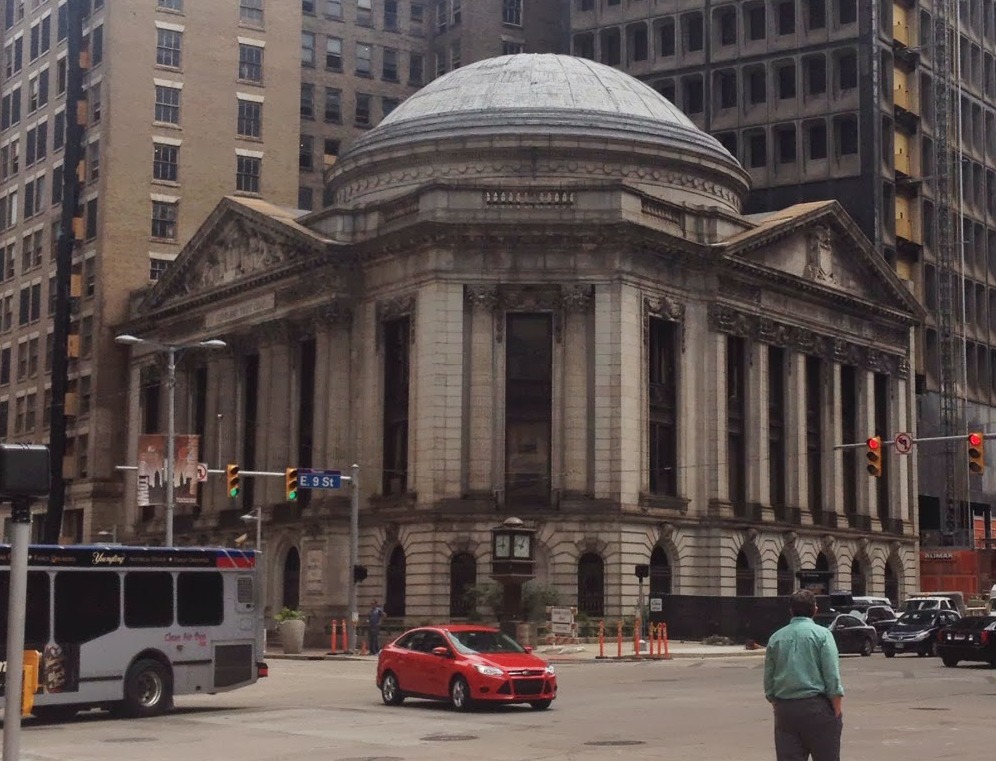 We stayed downtown and got to see some great architecture. This building was so interesting – it seemed like something the Justice League would use as a headquarters! (I think it’s a bank) 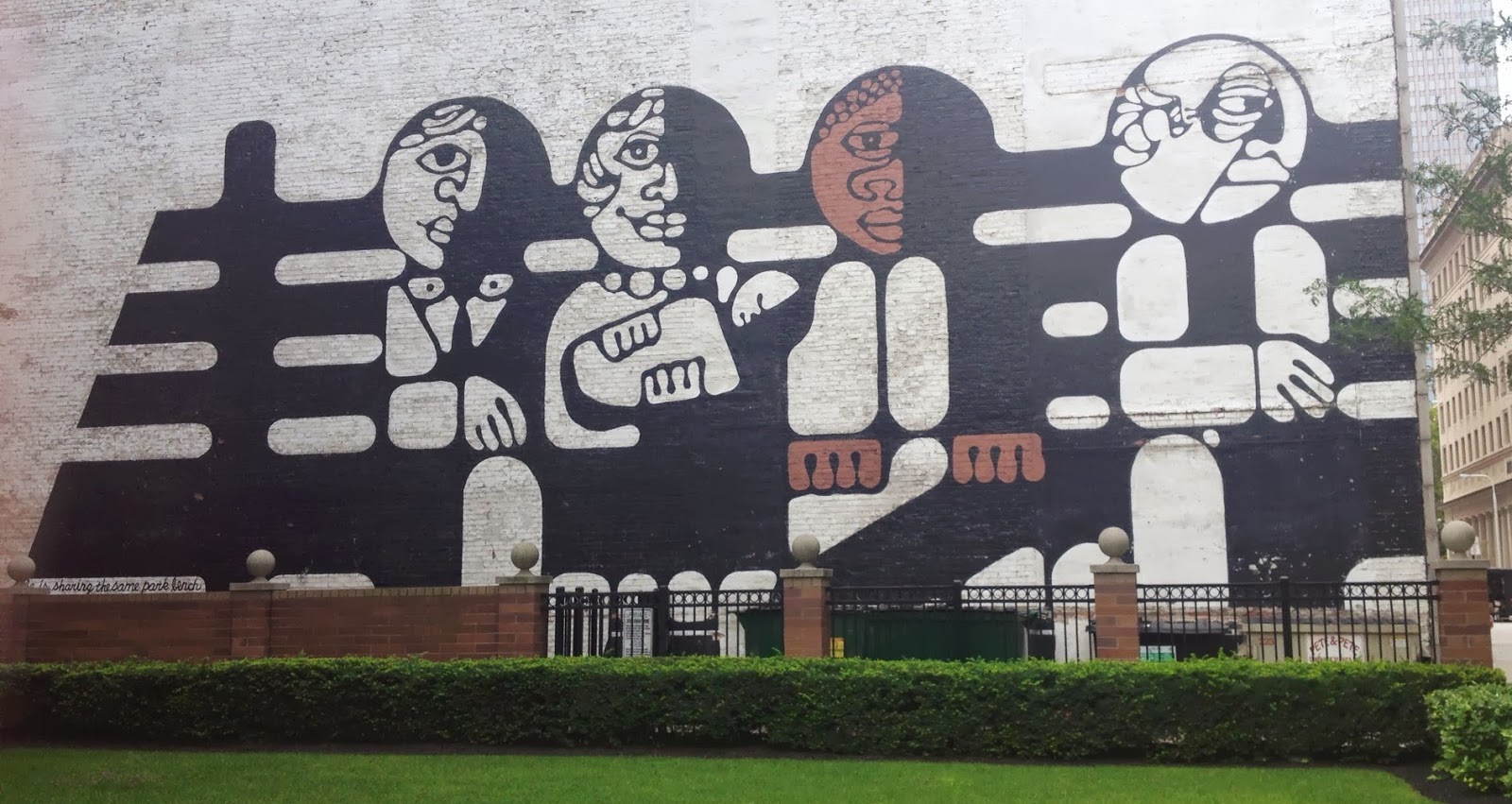 The other bloggers were going kayaking – I went canoeing once and it was awful. Like seriously – awful. We flipped and I panicked. I decided putting my big butt in a KAYAK would probably end up in tears – and not make me #happyinCLE. Thus, I got to go on my own for the afternoon. I came across this mural of folks sitting on a park bench – loved it. 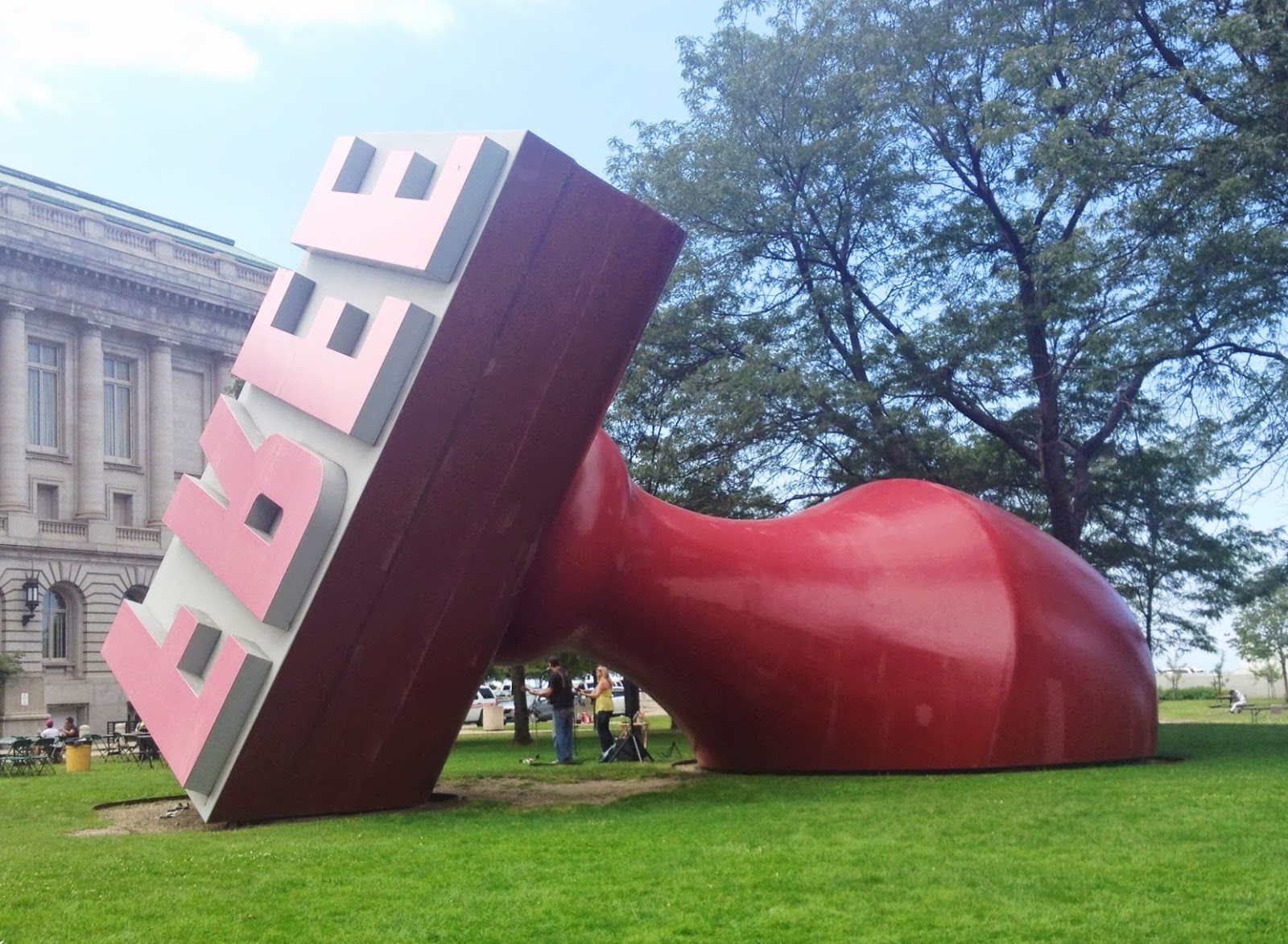 On my way to my destination I walked through a park that bares my maiden namesake (Willard Park) and found a giant FREE stamp – this Wiki page will explain why it’s there – it’s a lot to retype. 🙂

I also saw the Browns stadium – when we drove in we saw the Indians stadium – definitely reminiscent of Cincinnati.

And then there it was – a quick 15 minute walk from my hotel – the Rock and Roll Hall of Fame & Museum – now just affectionately known as The Rock Hall. It’s a pretty cool site to see.

Downstairs at the Rock Hall they have an exhibit that walks you through the history of rock & roll. And amid the area about the hub-bub about lyrics and parental control I found a quote from my OTHER husband. Oh how I love him. (Here’s his new single – awesome!)

One thing I discovered on this trip is that I love when you can just see one thing and instantly know who is behind it. I made this realization here and then it was solidified at the Museum of Art (blog to come). There’s no way you can look at this outfit and not know who wore it. I don’t know why I love that – I just think knowing that everybody in the room was thinking, “Damn! HE WORE THAT.” was pretty fun. 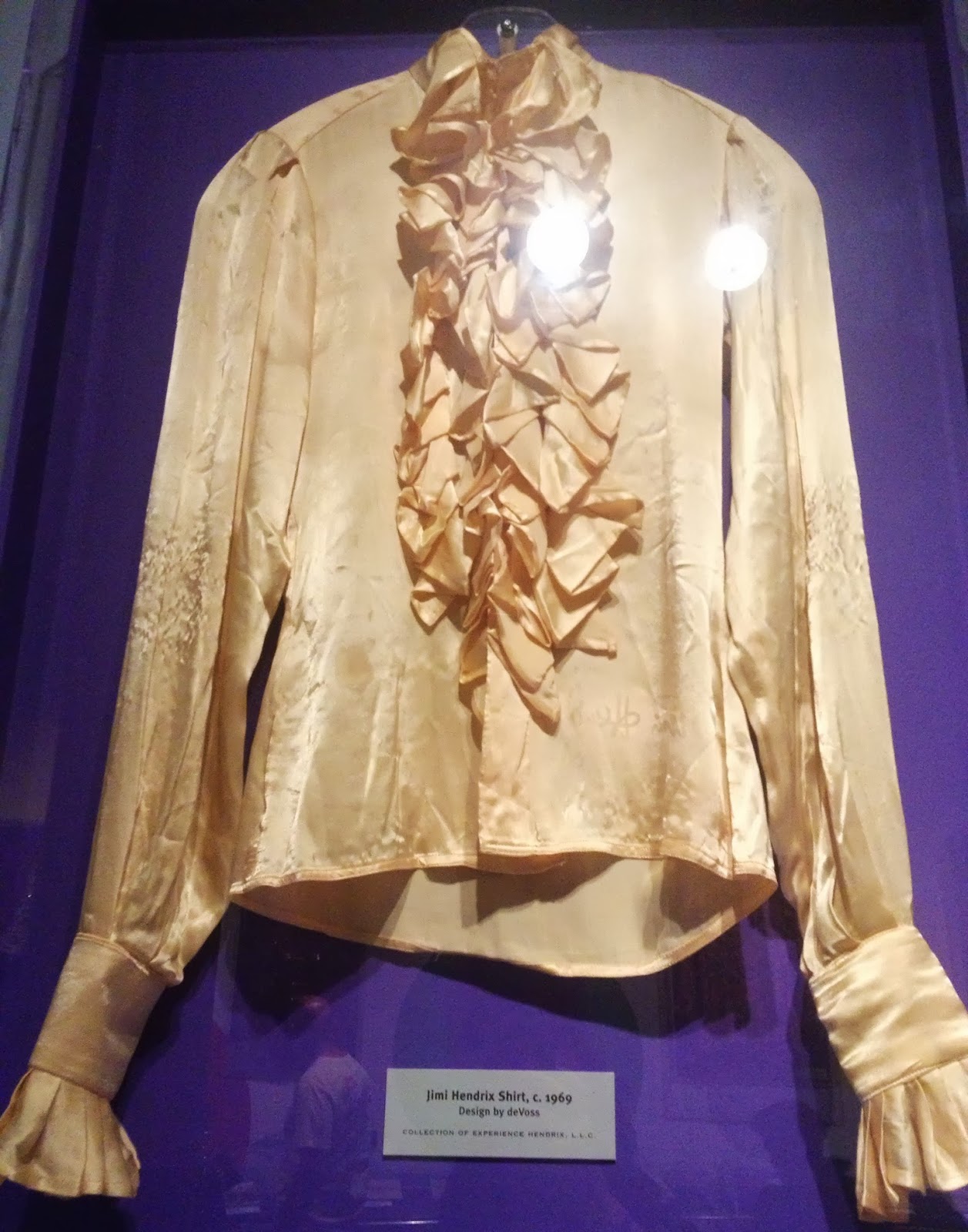 Now this one is easily identifiable if you say 60s (rather than 80s) – he had a pretty good sized area. Love me some Jimi. 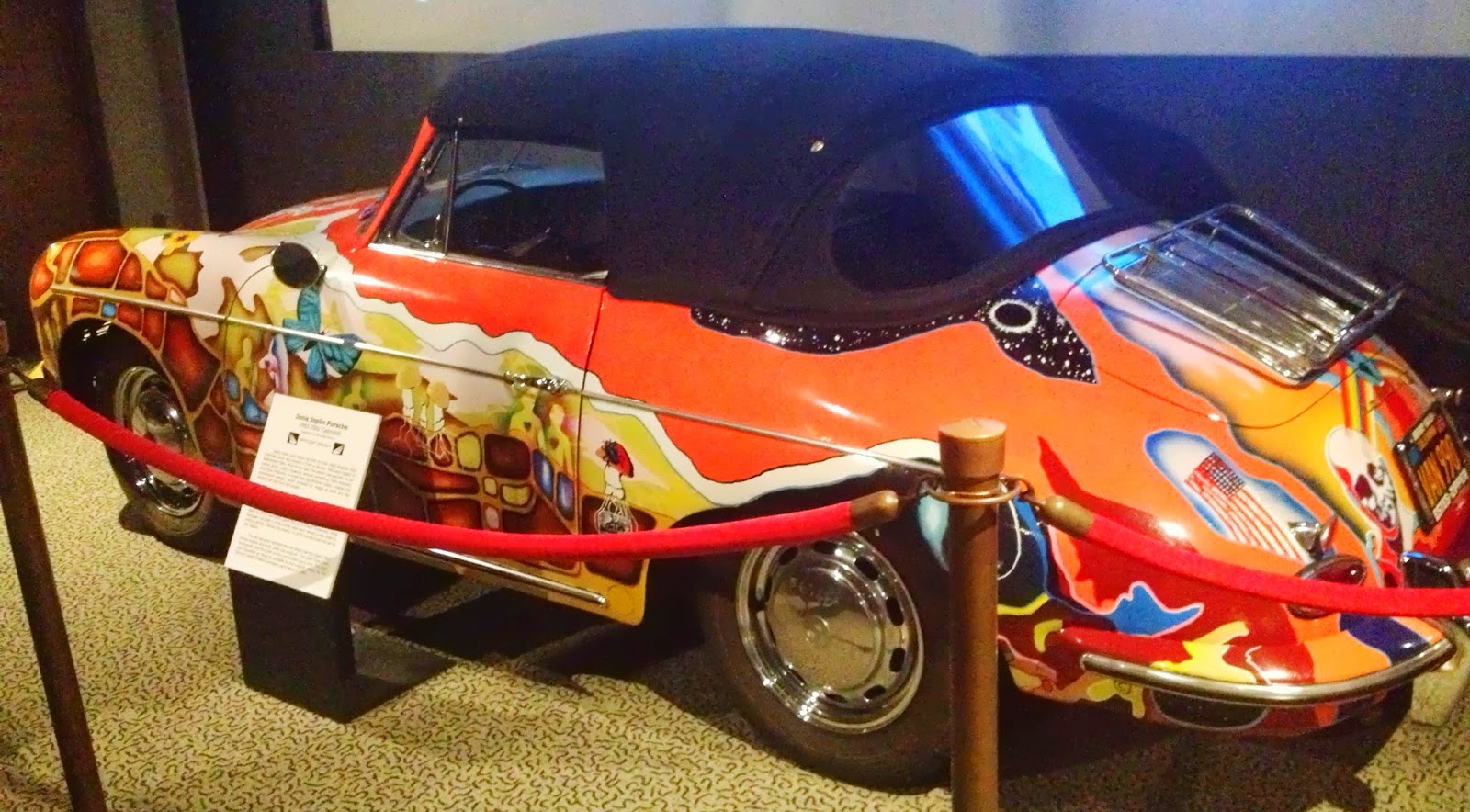 Janis Joplin’s Porsche – I kinda want that car! (no “kinda” about it) 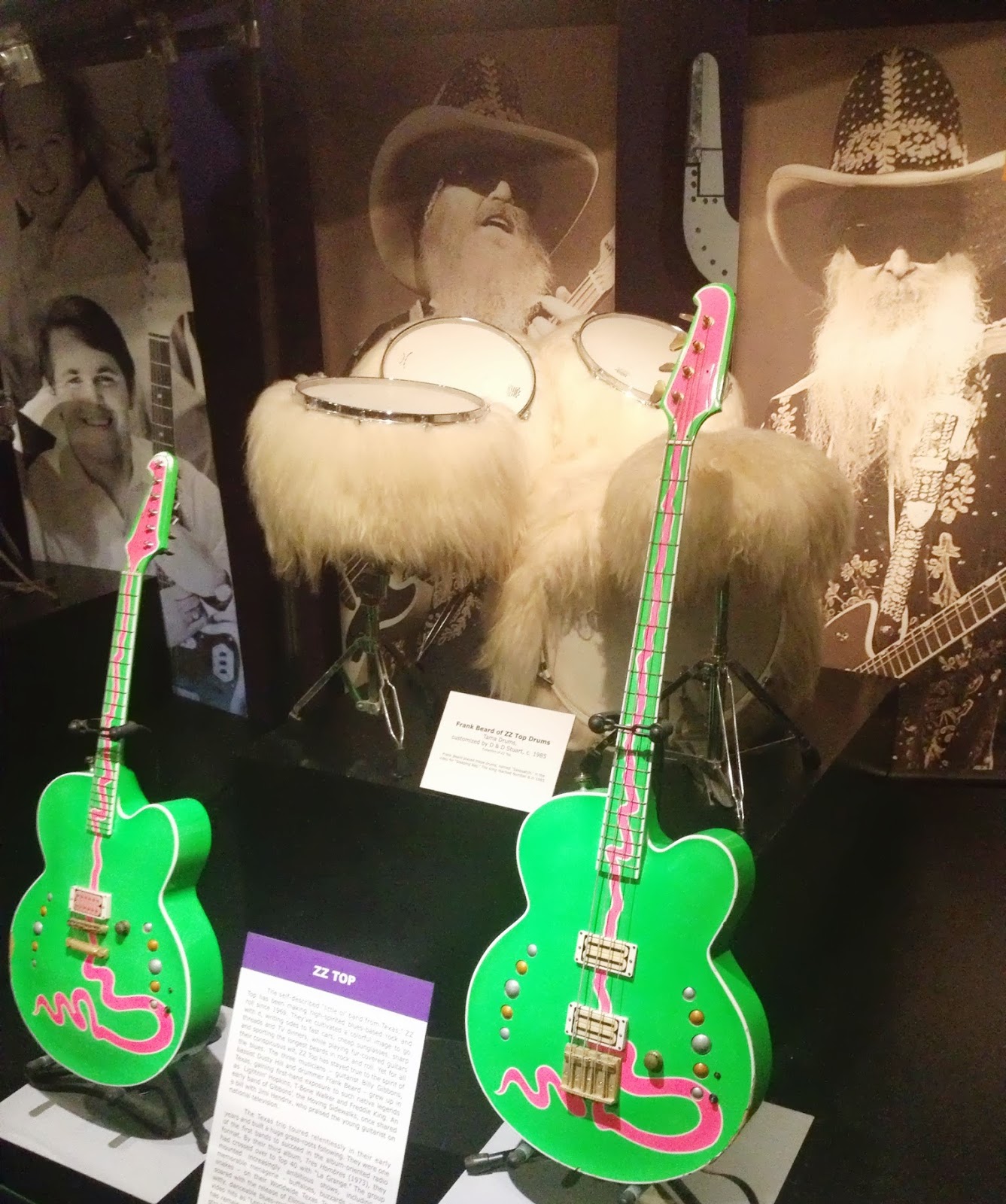 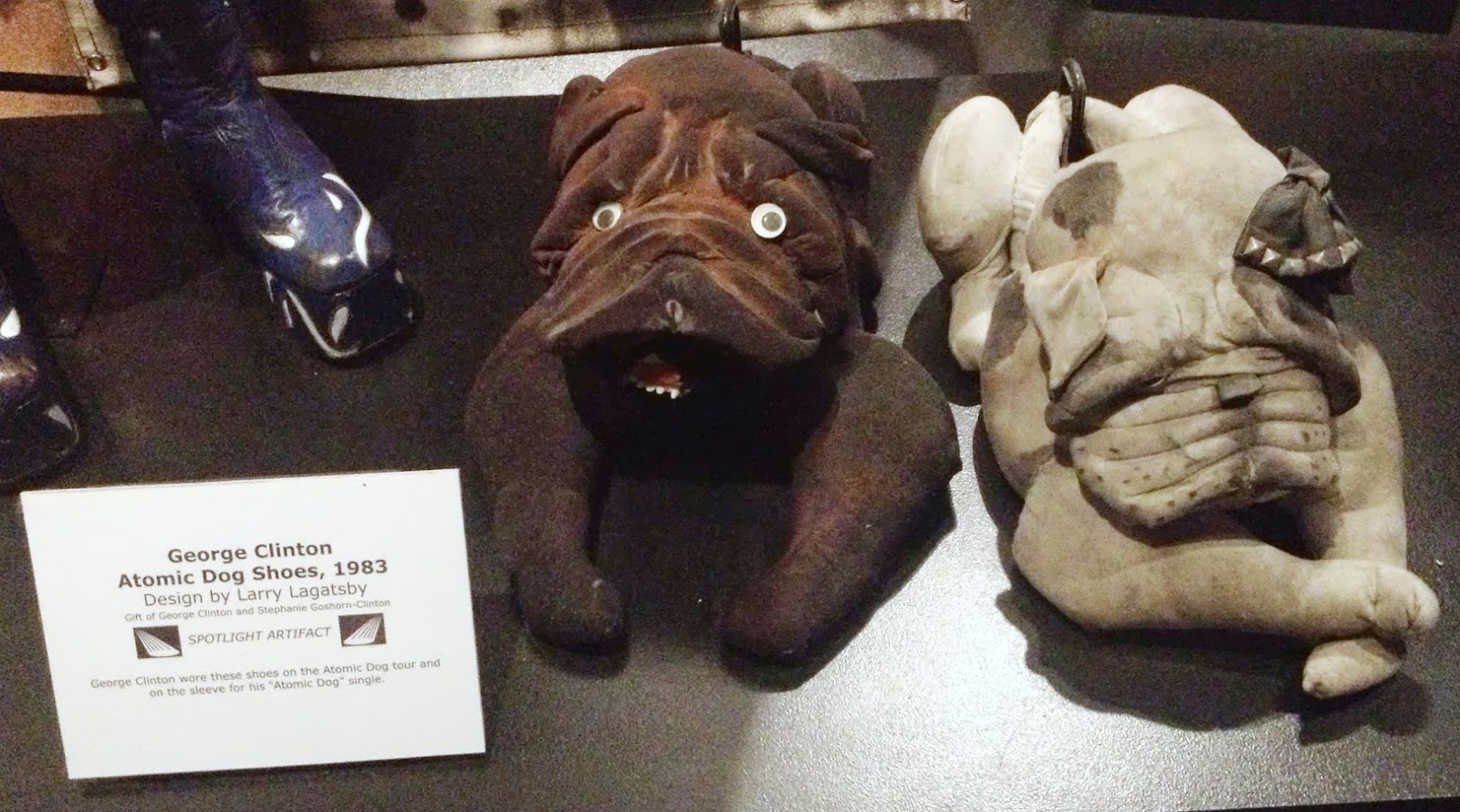 A little Cincinnati tie – the Bootsy Collins outfit was next to these – but these were way more fun! 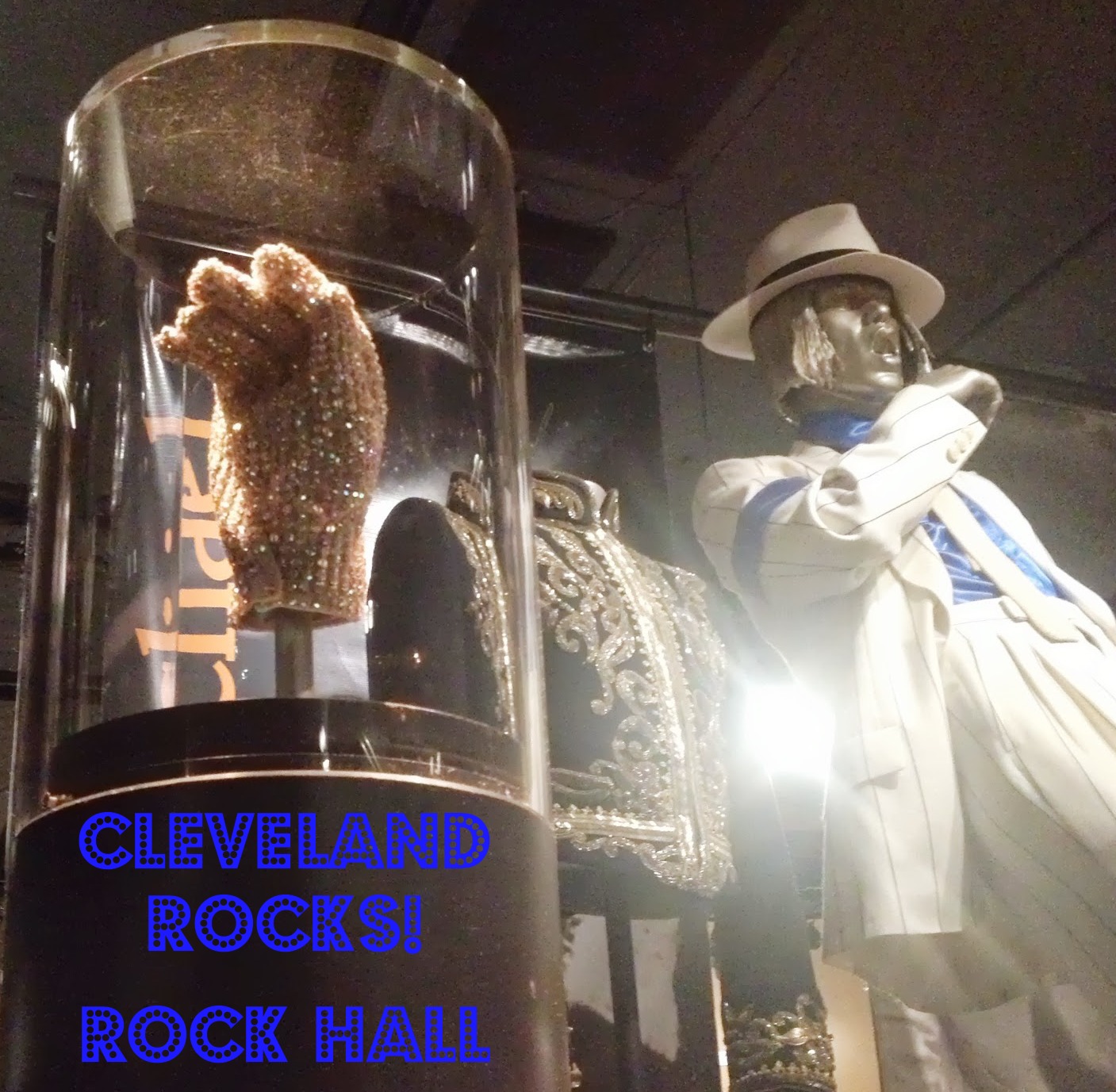 This was my favorite thing all day. By far.
I’m not the biggest music fan – so I didn’t gush and read every single display – but I can say – I stood in awe for a few minutes at this one. I instantly went back to 5th grade. I wish I had the picture – so picture it now:
Oh yeah – I was not popular and not hot! 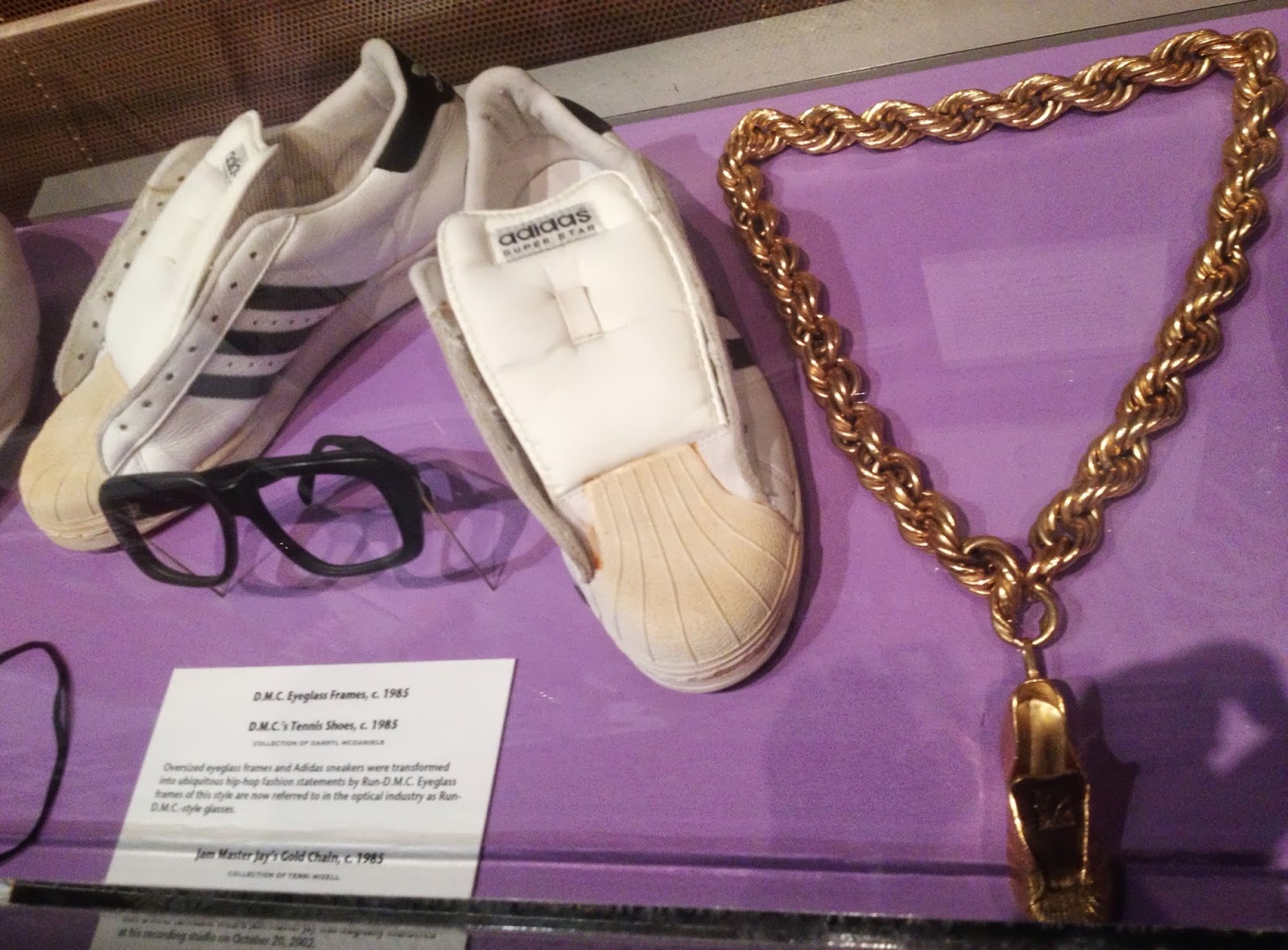 It’s pretty cool to even think about the history of some of these pieces and how they affected style for years to come.

They have the actual Hall of Fame area separated and run a “best of” video in the entry way of fun moments from the induction ceremonies. I got to see this guy’s induction – love it! Once inside there’s a huge movie screen playing a video of this year’s inductees. Behind the seating area are black glass walls with the signatures of all the inductees. It was fun looking for my favorites. 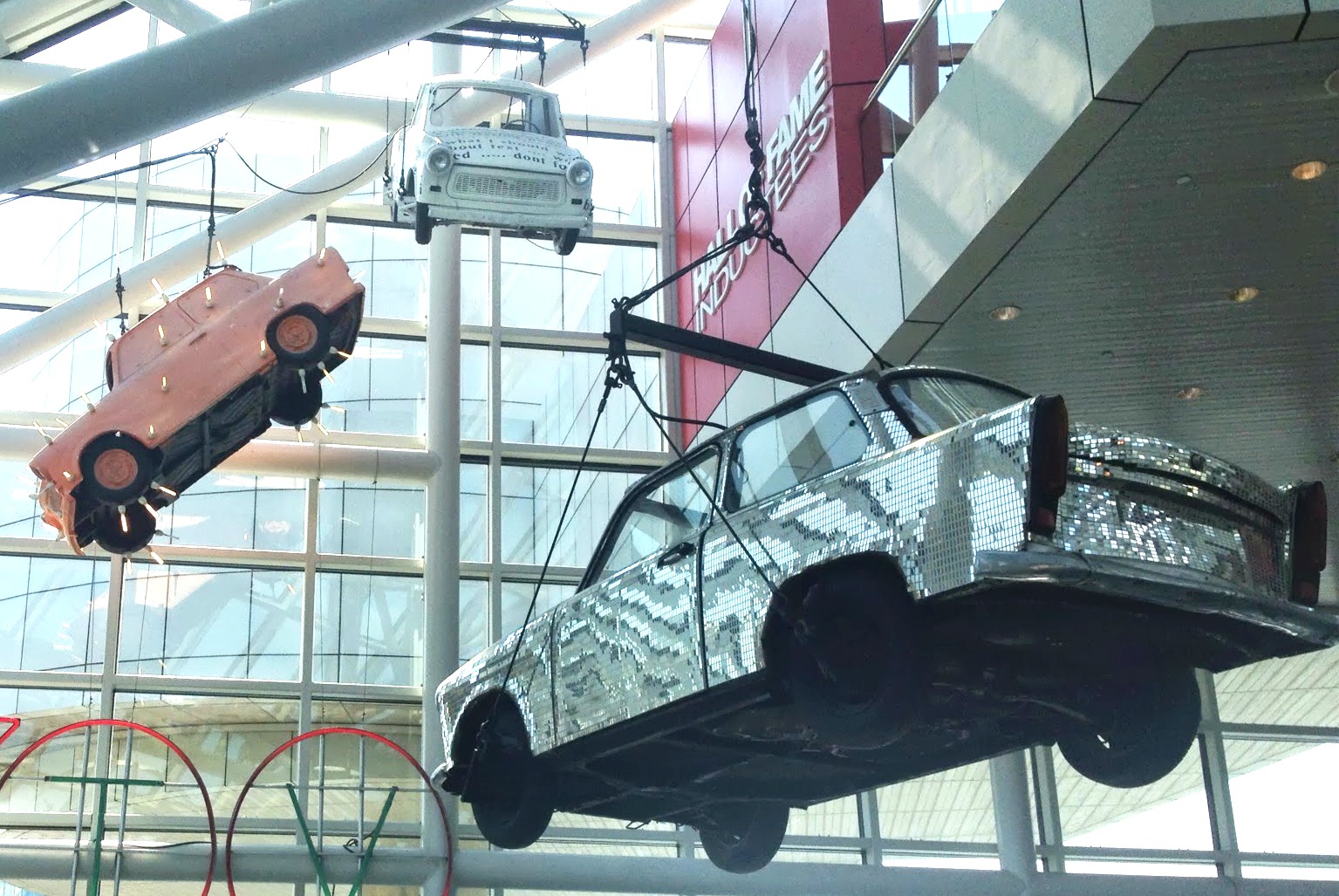 No idea who these belonged to but I wanna drive that mirror car! 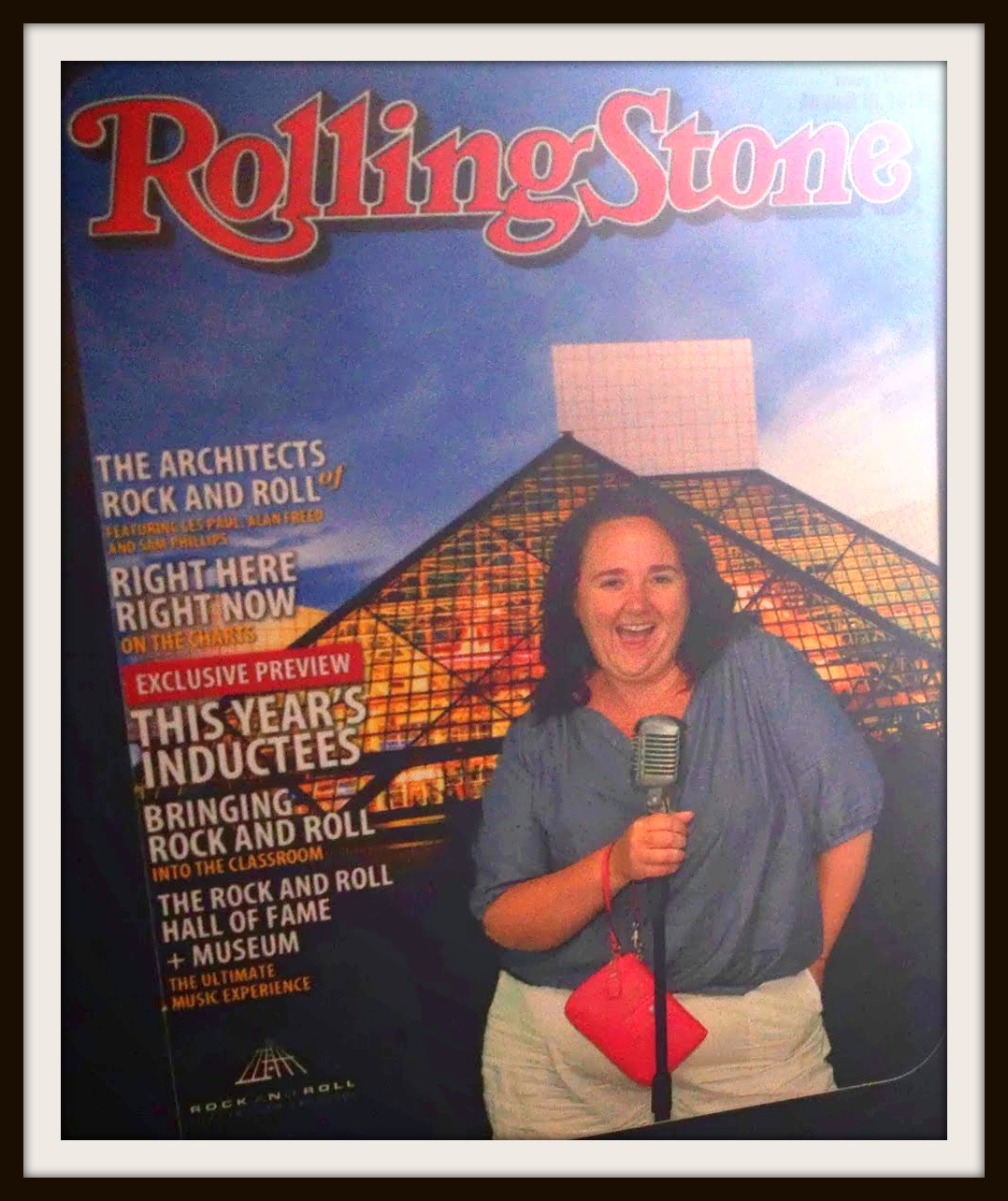 And because I hadn’t paid for my admission (thanks Cleveland) – I decided to spend the $20 on the commemorative photo. I completely and 100% channeled some Kelly Clarkson here – at least mentally.
After my busy afternoon exploring Cleveland – it was time for a CUPCAKE SHOWDOWN!!! Okay – it really didn’t happen that way – but it works for the blog. I got a cupcake on my way back to the hotel – then the next day I got a cupcake somewhere else. So now – it’s a CUPCAKE SHOWDOWN!!!!
First up was Colossal Cupcake which was across the street from my hotel: 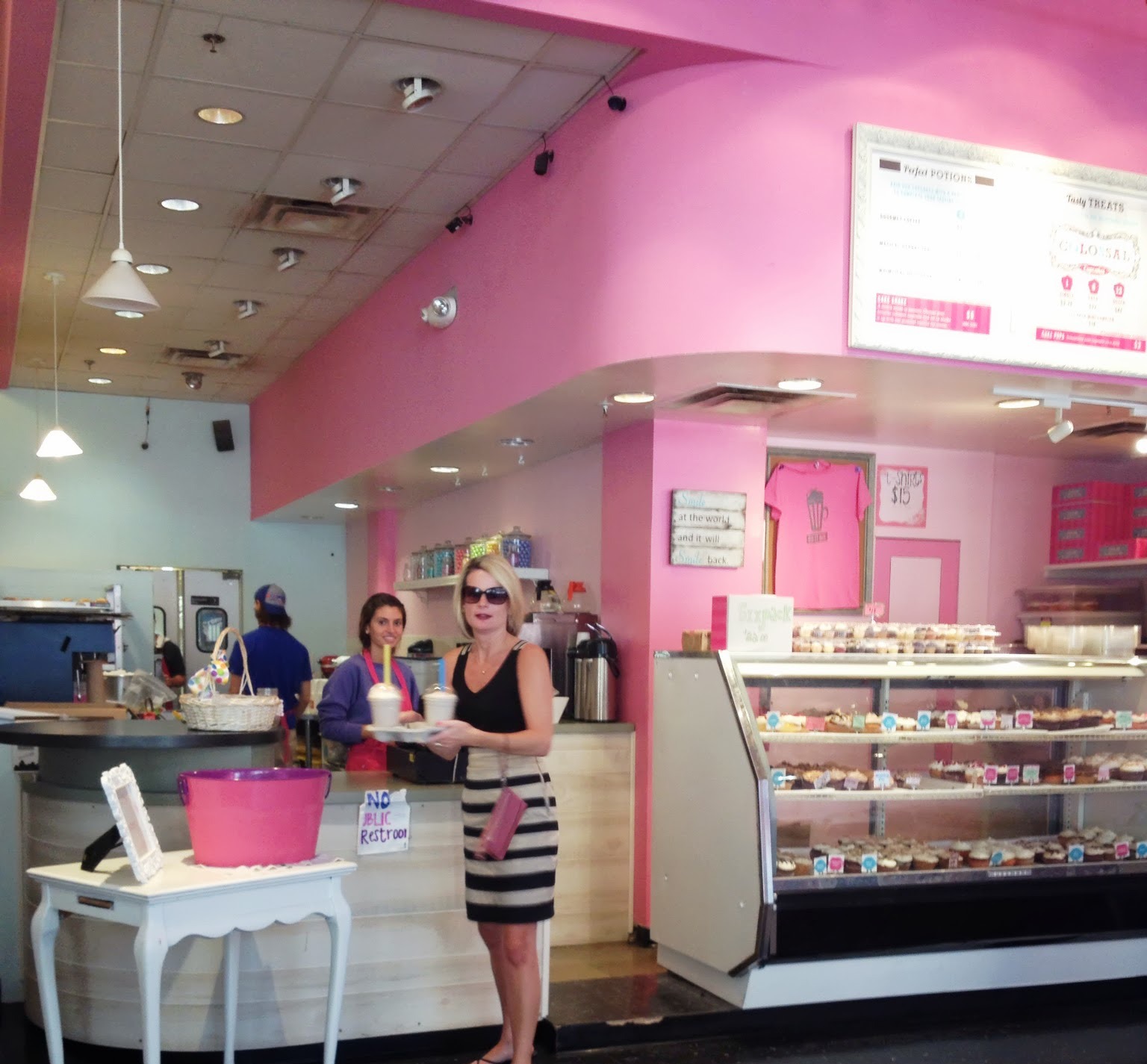 So pink- how could you not love it?! 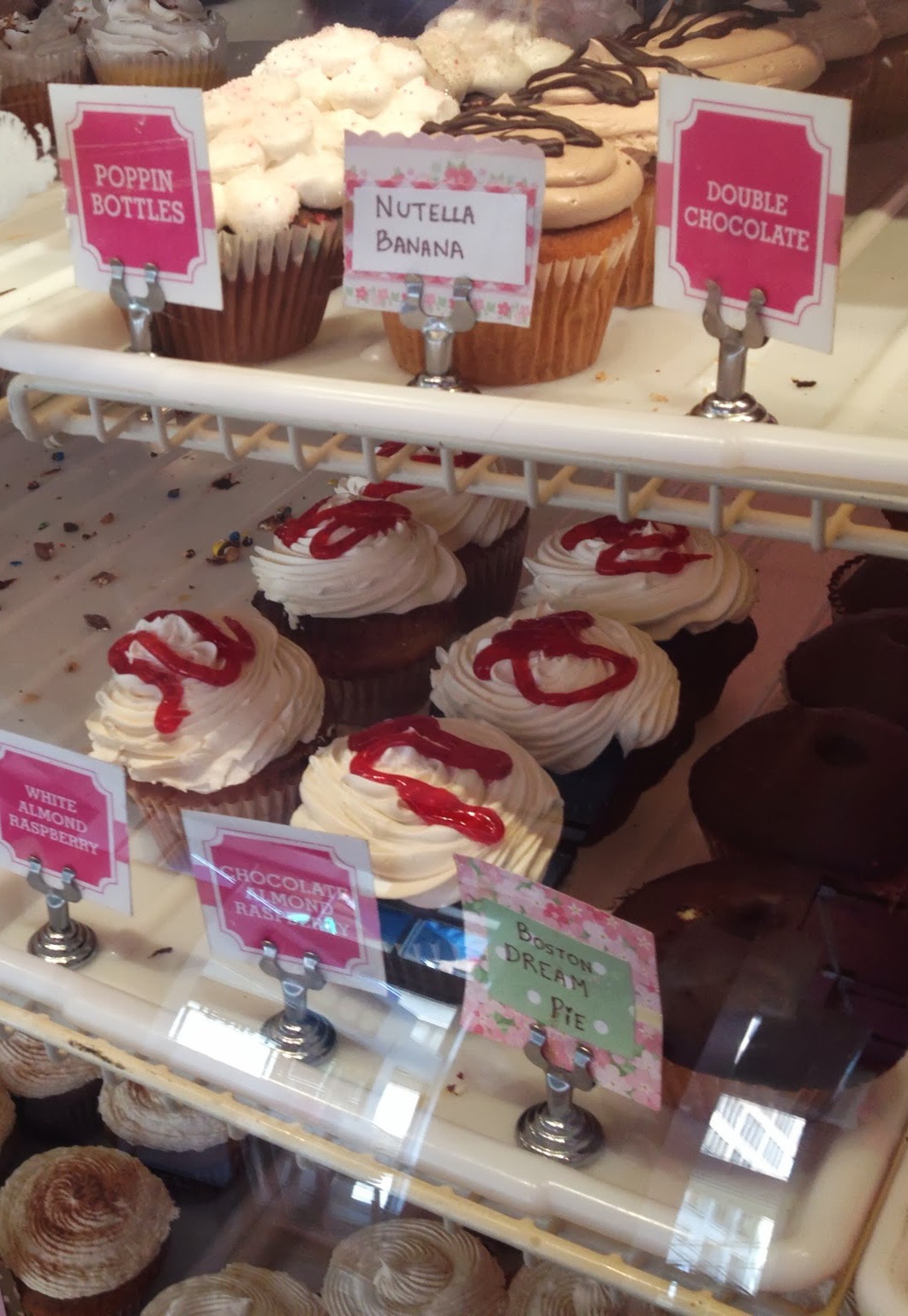 They had some great flavors – Poppin Bottles, Boston Creme Pie, White Almond Raspberry…but I got 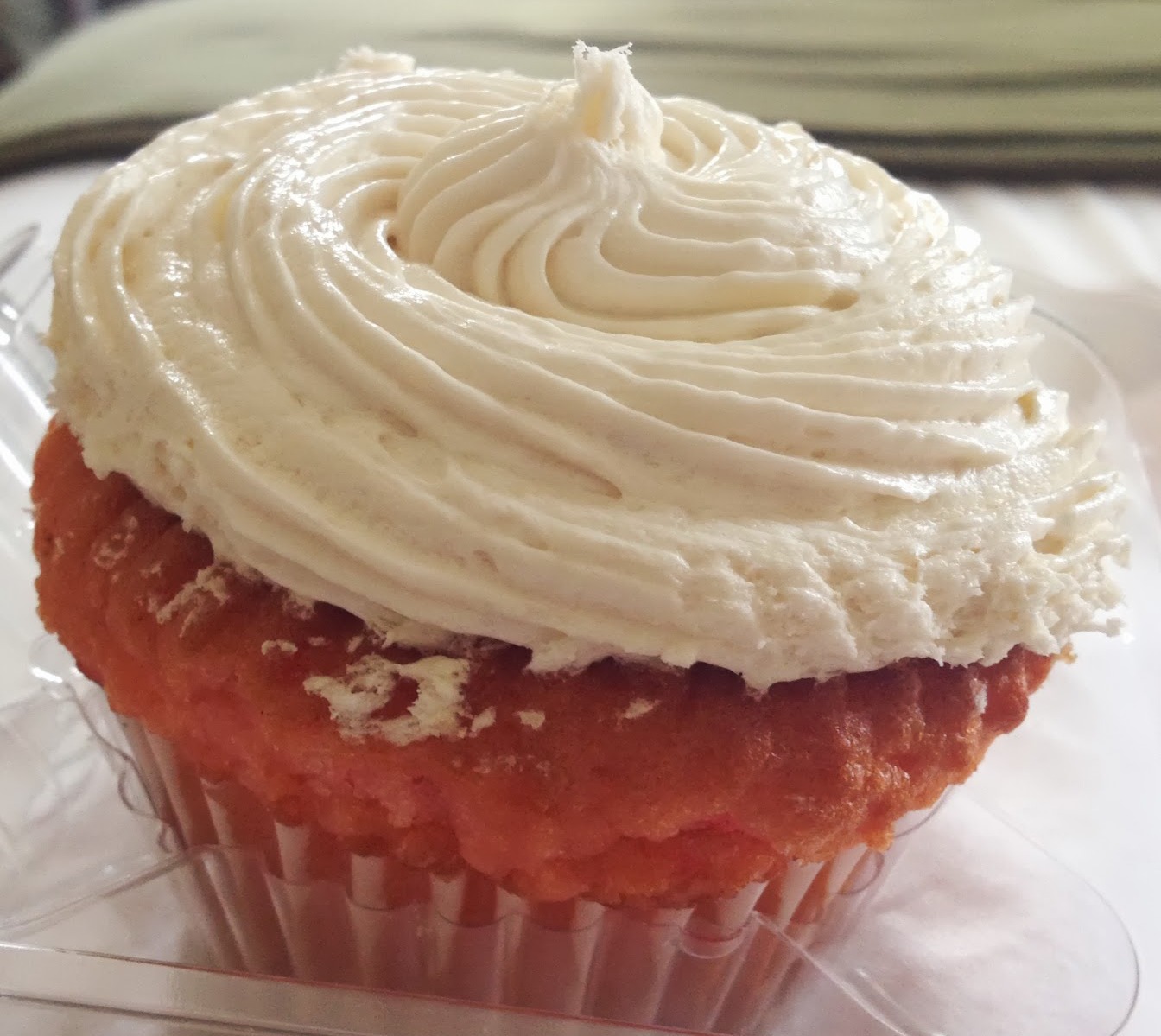 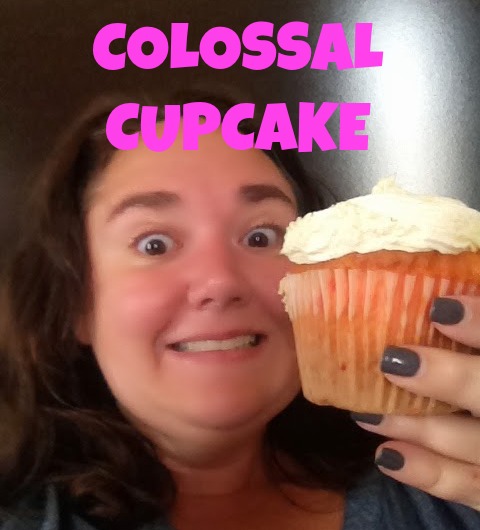 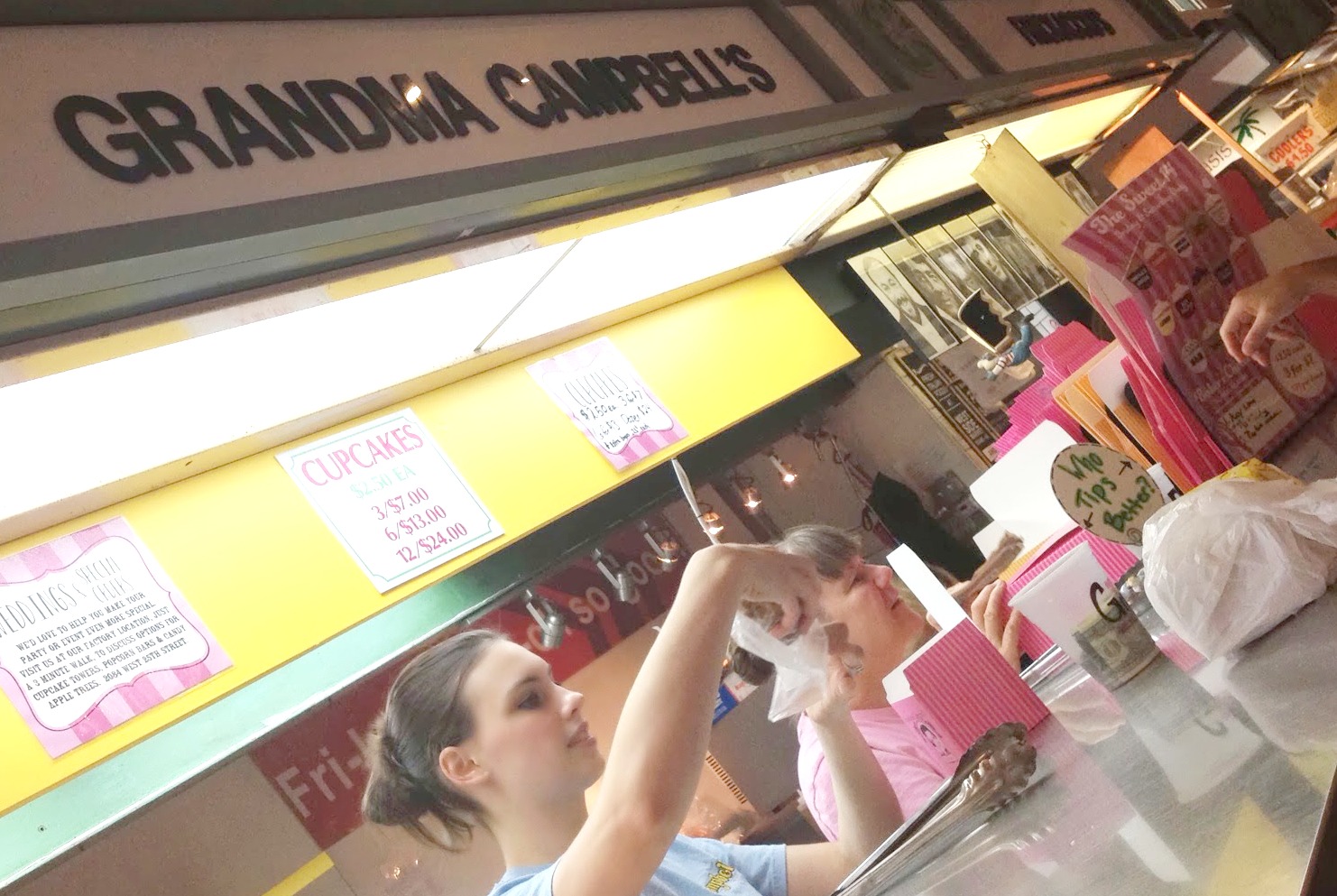 The next day we headed to the West Side Market (blog to come) – it’s the Cleveland mega-version of Findlay Market. I don’t want to steal the thunder for WSM here – it definitely deserves it’s own post. Inside there was a booth for Grandma’s Campbells – I had seen someone carrying a box with cupcakes in it and knew I had to try it! 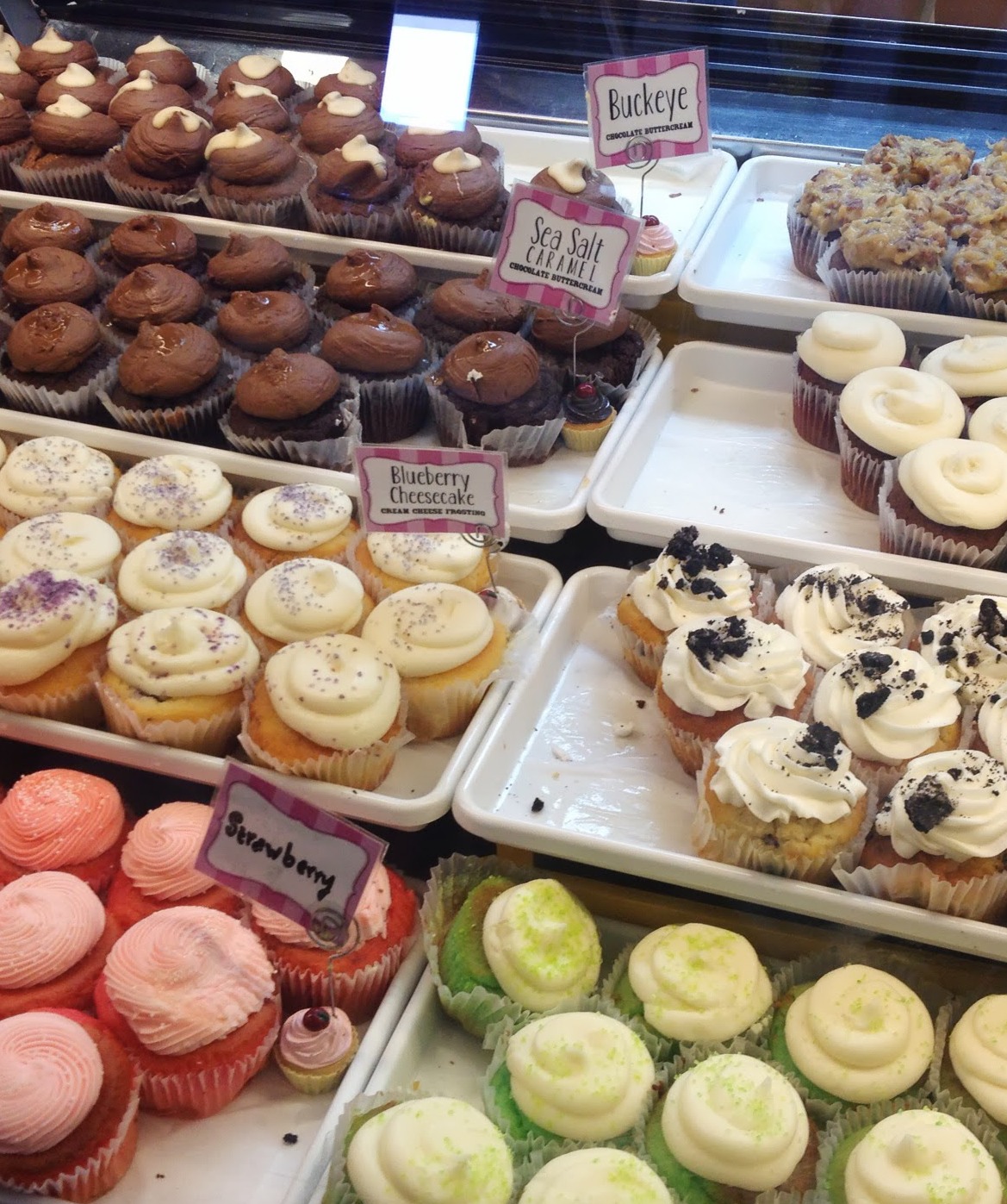 They had some pretty sassy flavors as well – key lime, buckeye, blueberry cheesecake – but I went for 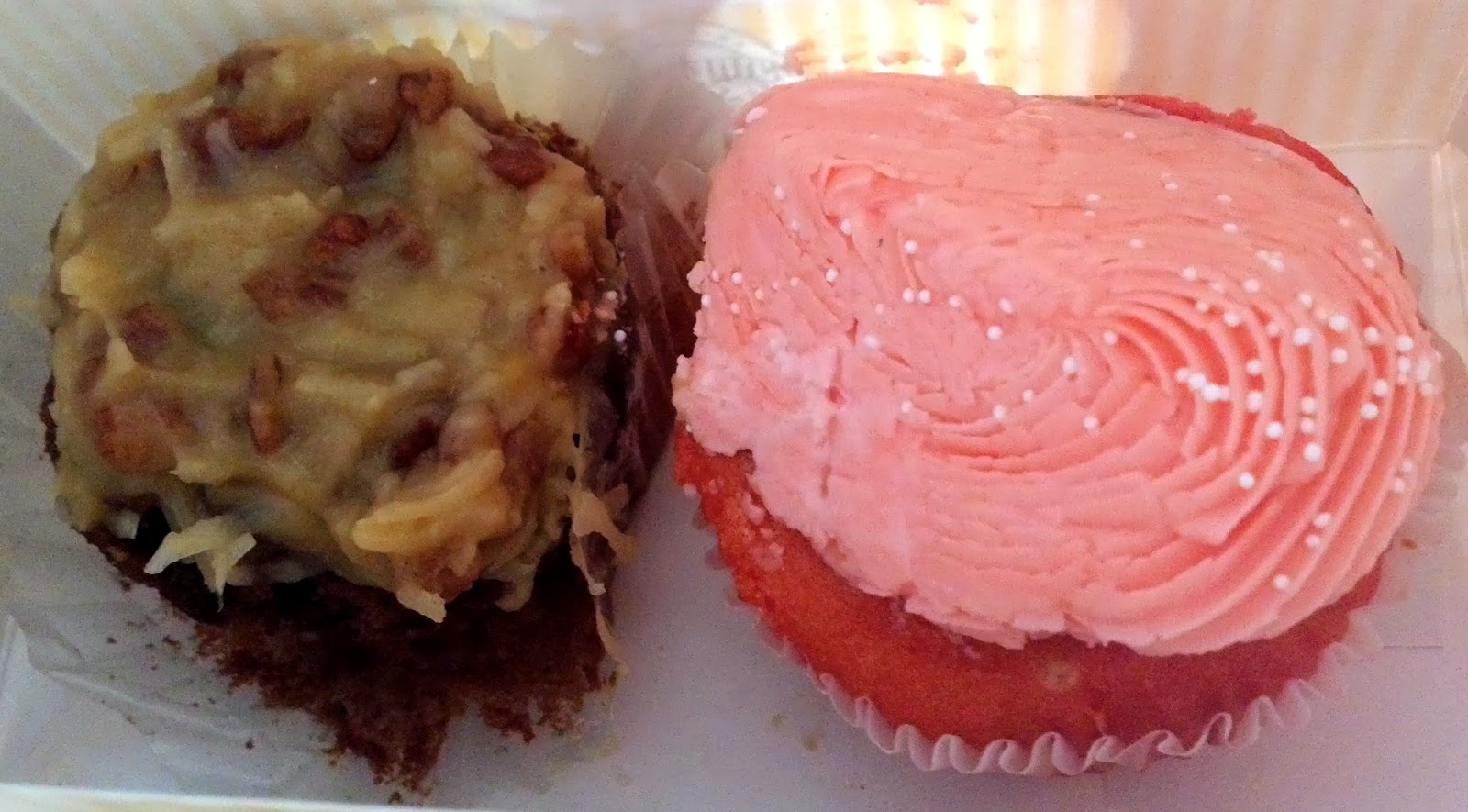 Well two – German Chocolate and Strawberry. The strawberry was for the CUPCAKE SHOWDOWN!!!

Colossal – well the cake itself was moist and very strawberry-licious. It was COLOSSAL in size – I definitely had to break bites off rather than bite into it. The icing was cream cheese – which I did not love. Turns out – that’s their thing.

Campbell’s – the cupcakes weren’t quite as large but were definitely larger than you’d make at home. The cake itself was probably a fair comparison and very similar to that of Colossal. The icing was sugary goodness – which I loved! I also tried the German Chocolate later and it was equally delicious. I love how the cake in German Chocolate is a different kind of chocolate – it’s more subtle. Yum.

So the winner of the CUPCAKE SHOWDOWN is: 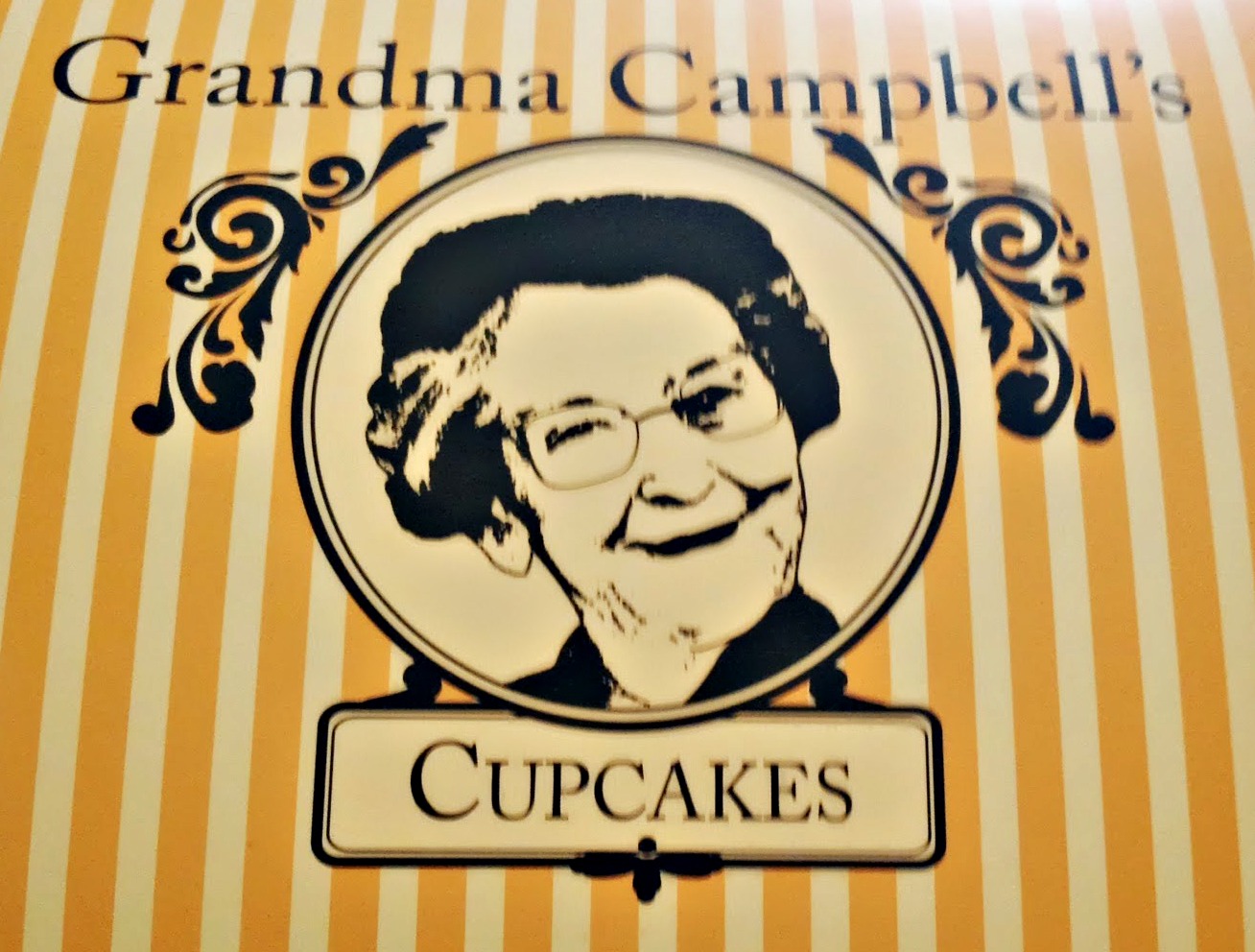 Honestly it wasn’t much of a contest – I don’t like cream cheese icing. It’s one of those things there should be a warning on the door for it! Yak! So congrats to Grandma Campbell’s for winning the Food Hussy CUPCAKE SHOWDOWN!!!

Why Should You Go? Well the Rock Hall is a must see for any Cleveland visit. I skipped the Rolling Stones exhibit because of time and I’m not a big fan – but the rest was well worth the trip. The City of Cleveland was voting via social media on where we should go and that was the #1 choice. Everybody but me had been so I went on my own for this little afternoon excursion. It was really fun to see such historical pieces. As far as the cupcakes – icing choice is up to you – but I’d go for Campbell’s for sure. They also have Dichotomy Popcorn that was in our welcome bag and Larry has been gobbling it up!

Disclosure: My trip to Cleveland was provided by Positively Cleveland. They covered the hotel, admissions and meals. These cupcakes I bought on my own though – and they were worth every penny!