Disclosure: Our trip to Orlando was provided by Allegiant Travel and Visit Orlando but all opinions are my own. 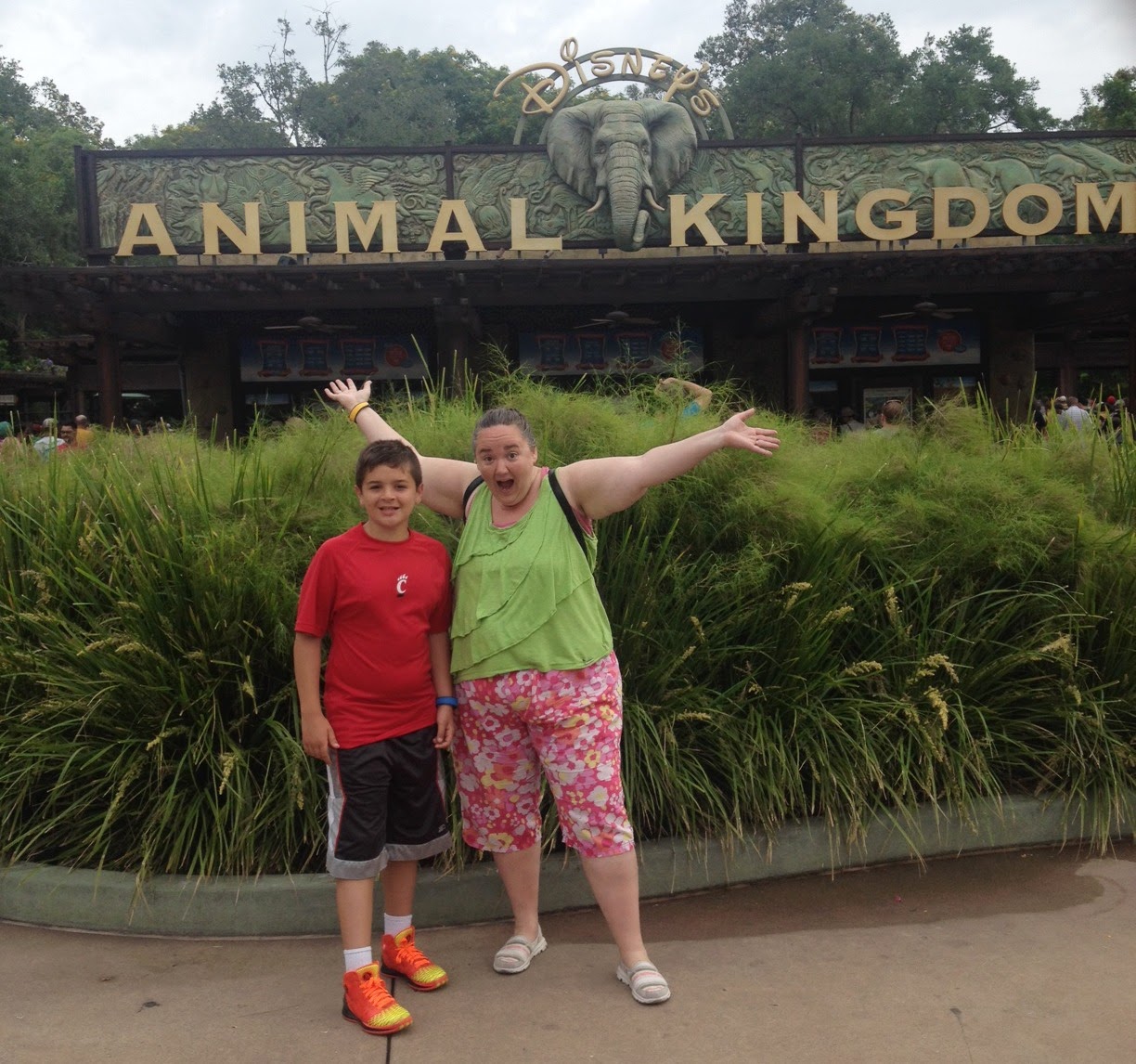 Recently I was invited to go to Orlando, FL with my friend Adventure Mom and her kids. The park I was most excited about was by far – Animal Kingdom. This was a lifelong dream and I was READY!

We had our fast passes ready to go and had them first set up for the Safari – knowing that’s one of the most popular attractions at Animal Kingdom. Luckily though – we were there when the park opened! So we took off and were able to push our passes back and just hop right on the Safari! 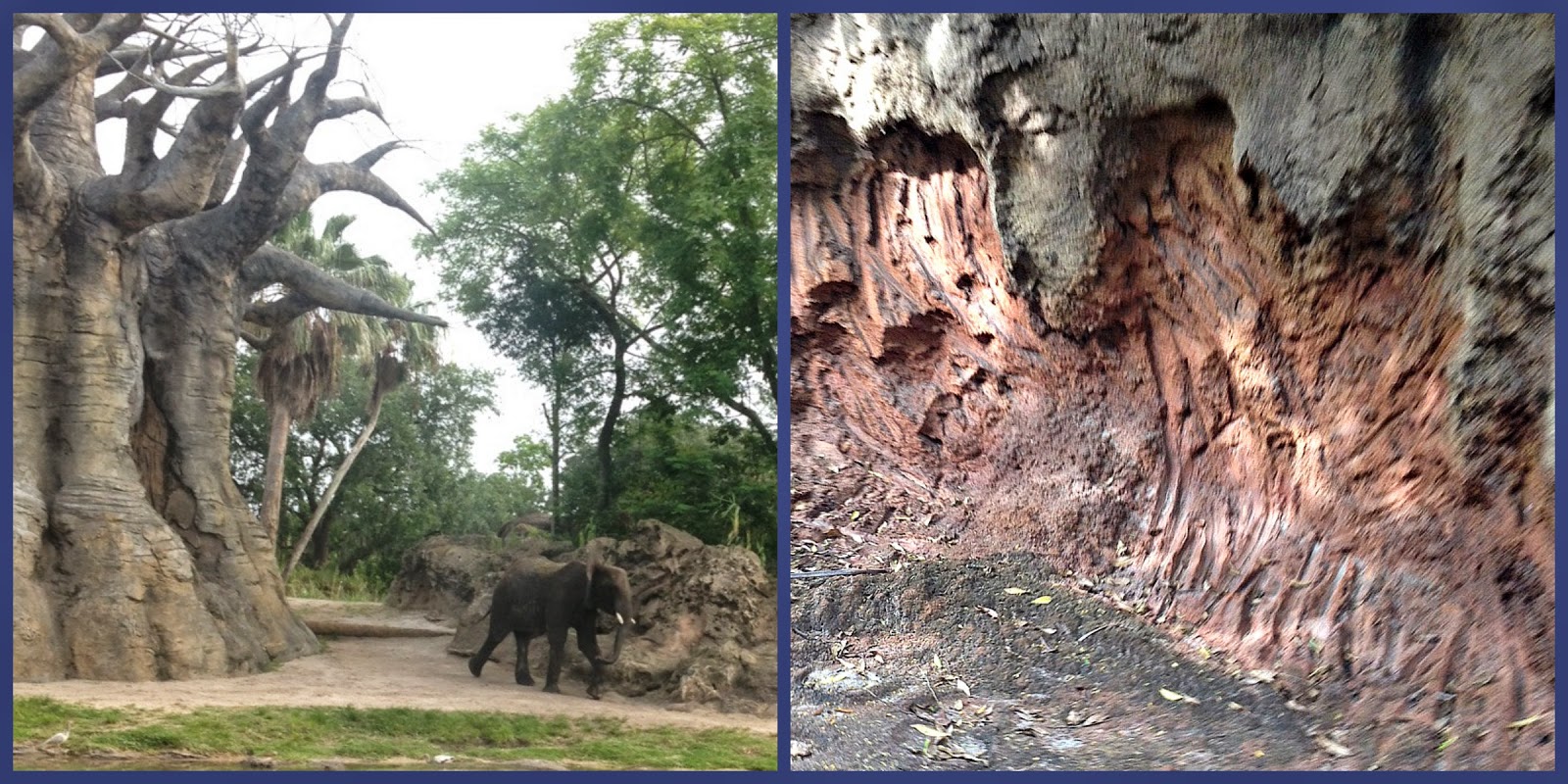 The safari was really interesting and fun – it felt like you were in the movie Jurassic Park (sans people-eating dinosaurs). We were in these giant open-air vehicles and were going on a safari! It’s sort of a zoo – but with a much more natural setting. The driver is also very knowledgeable and makes it feel like a real safari. I’d love to know behind-the-scenes how much of a zoo it really is.

We did get to see animals with a lot of space and wandering room. On the right is a clay area where the elephants rub their tusks. It was pretty cool. 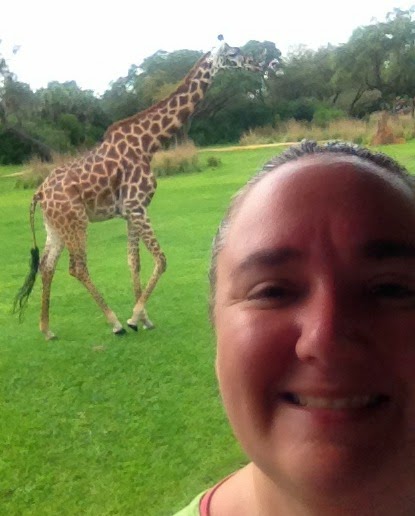 The giraffes were the most amazing part – we’re driving into a large grassy area – and suddenly we see these guys walking toward us. They were so beautiful and they just kept getting closer! So close – we could get selfies with them! 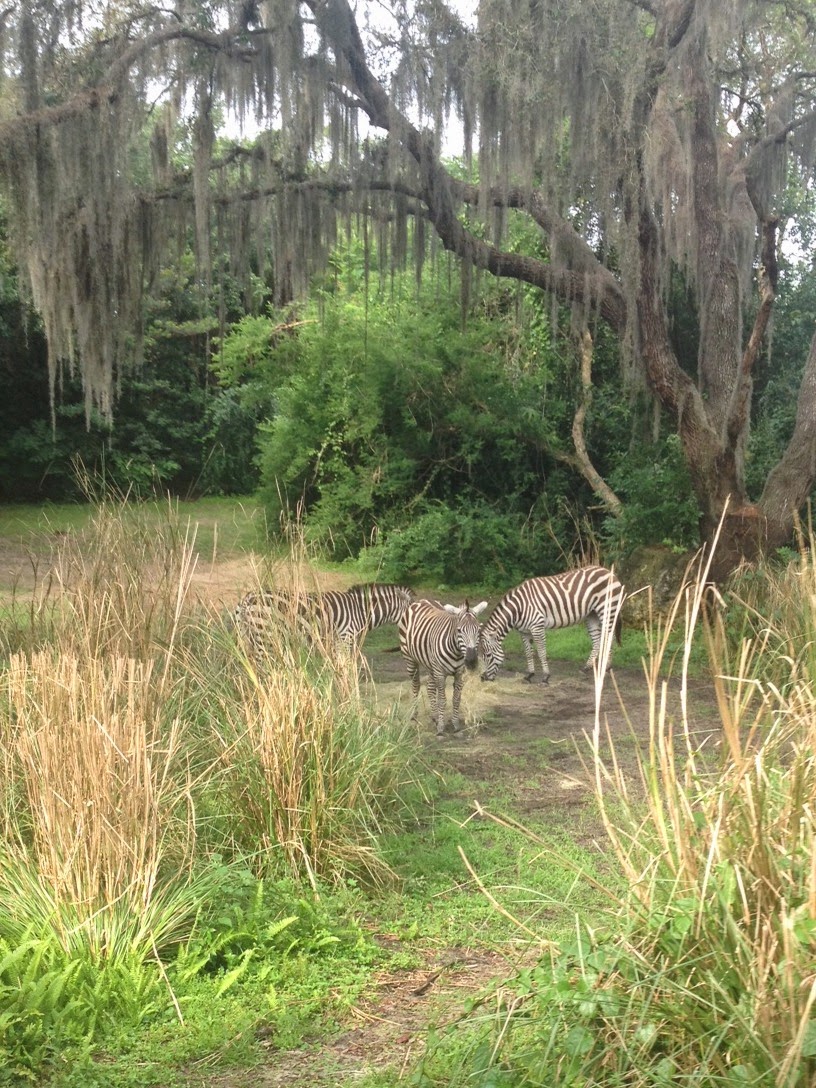 Some of these photos were just so beautiful – it was so cool to see them without fences – just open and there they were. You couldn’t see any fences – but I’m sure the lions were separated somehow from the other animals – but it’s pretty invisible to the visitors. 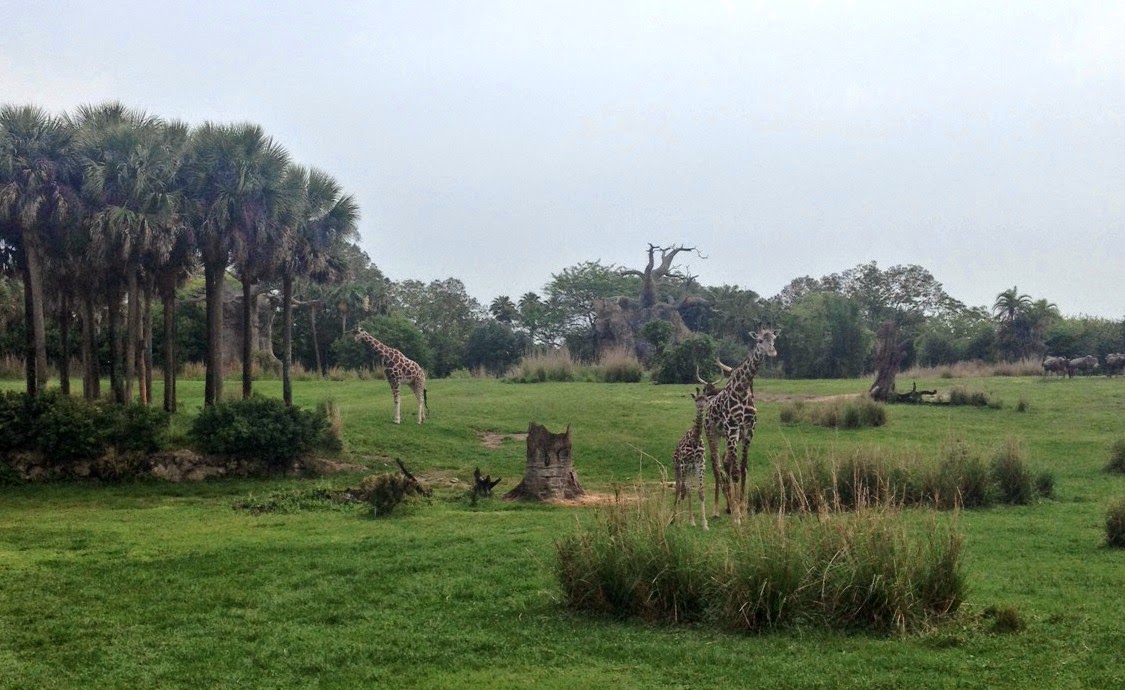 We also saw the Finding Nemo show – it’s pretty cool show – with real people holding fishy characters. The things they all did were neat and they sang all the fun songs. It was a bit long for me – but the kids all loved it. 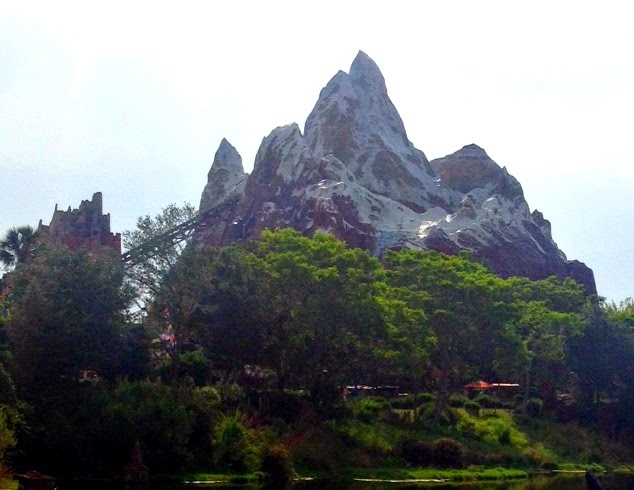 As we were walking through the park – we spotted Mt Everest. I was a bit worried about this coaster – I mean – look at it – it looks hella big! But the kids were excited (and so was Adventure Mom) so we trekked over to scope it out. 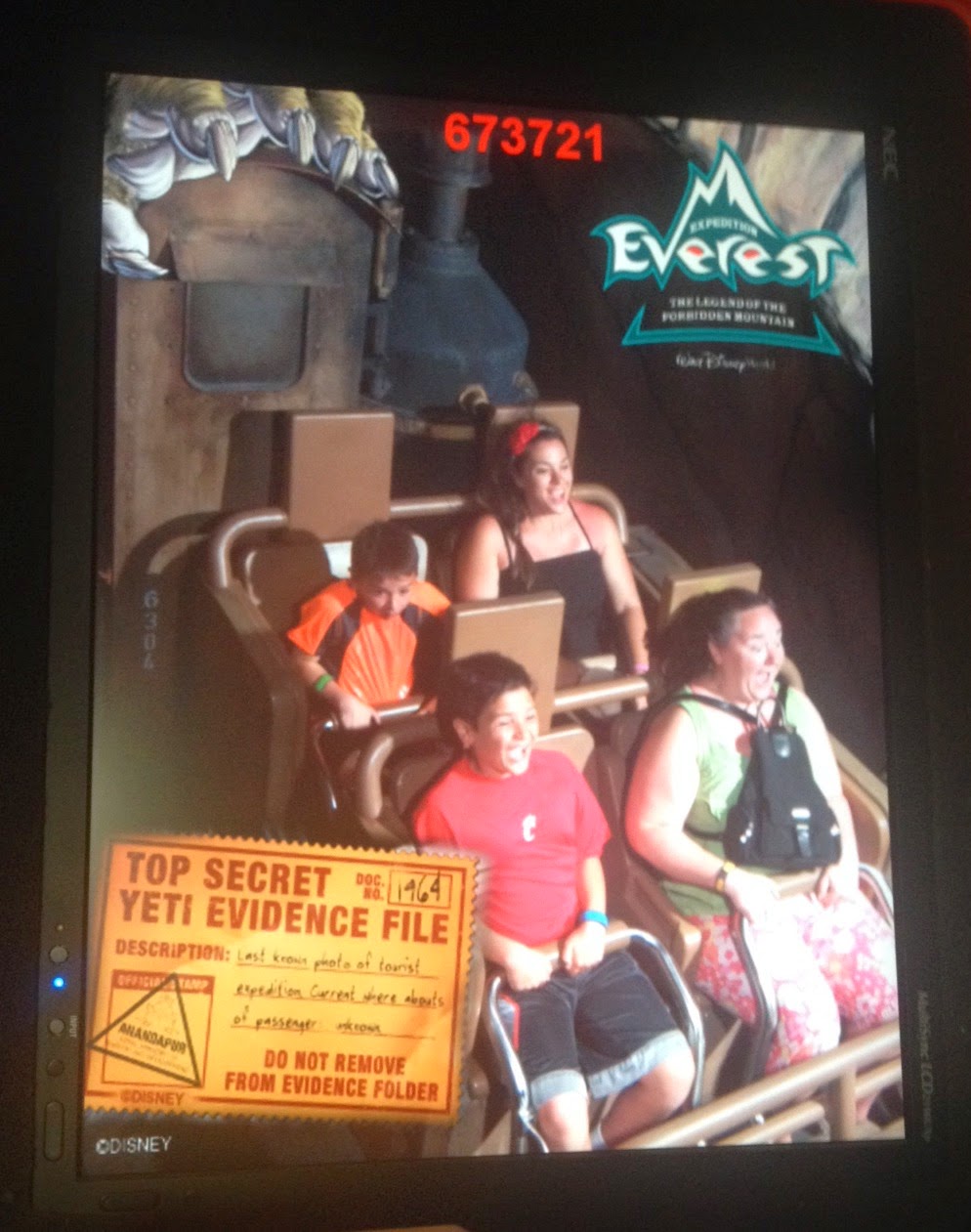 Here’s a pic of all of us on the ride – much better than the Space Mountain pic from Magic Kingdom. This ride was AWESOME! What I really loved about all the rides at Disney – they were “thrilling” but not “terrifying”. They were all perfect for me – I could have ridden every one of them numerous times. Everest and Space Mountain were my favorite from the entire visit. 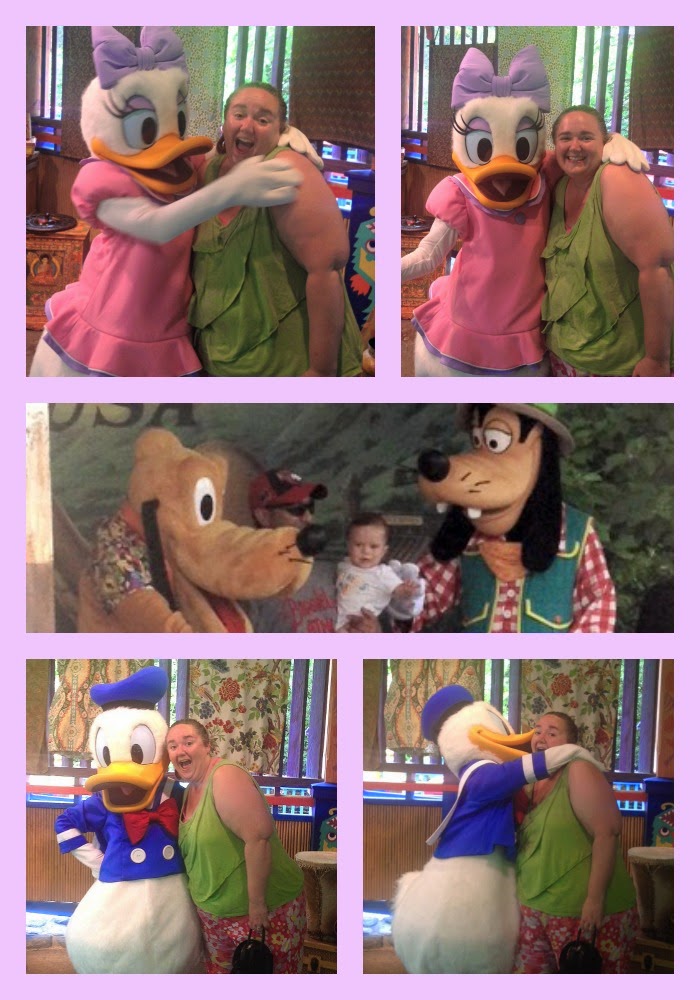 Lastly – I finally got to see characters!! I really thought they just walked around the park and expected to see them all over the place. That is not the case at all. They have special areas where you get in line to see them and take pics. You may bump into one on their way to their spot – but it’s rare. I didn’t see ANY at Magic Kingdom but we saw quite a few at Animal.

The characters are pretty amazing – because they are IN CHARACTER every moment! Even walking out of the area – Daisy Duck was bopping and bouncing along. Donald Duck mauled me a little – I think he was looking for a new hussy while Daisy took a break. 🙂

I could have spent all day at Animal Kingdom (and actually considered it). There were a lot of other special encounters and experiences to see that we didn’t have time for (7 parks in 2.5 days). There were also a bunch of ethnic areas with goods and wares from countries around the world.

So when you go to Disney – enjoy Animal Kingdom and tell Donald hi for me! 🙂