Subscribe
So – I am an Iowa girl – which most people think means I’m a farm girl. Well I’m not. I grew up “in town” – granted – it was only a town of 3000 people with a Maid Rite, a Caseys (I do miss their pizza) and a flashing red signal light – but it was town.
Why do I mention this? Well – this “farm” girl has never been camping. Never. Never ever.
My hubby wanted to go and I was up for the challenge. I like fresh air – why not?! We borrowed camping equipment (why buy if I end up hating it – thanks Marla & Steve for the loaners!) and headed off on our camping journey!

We went to East Fork State Park Campground – it’s close by and a pretty nice park. It’s in Batavia. I didn’t even know the process – but these wonderful folks in the office told us to drive in – pick out our campsite and then come back and take care of the payment, etc…

Driving around to pick out a campsite is fun! They have areas A-L – all are electric, pet friendly – and all have a picnic table and a grill. We found a great shady spot in a quiet section and were off! We got a frequent camper card and everything. One night of camping at East Fork is $27 – fyi. 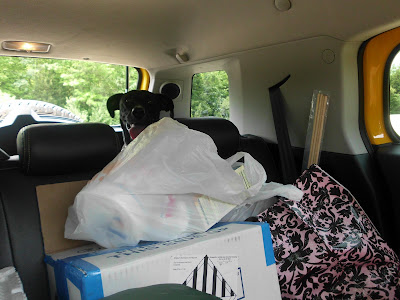 I had downloaded a camping checklist and went to town packing. And yes – DOG DOG was making the trek with us! 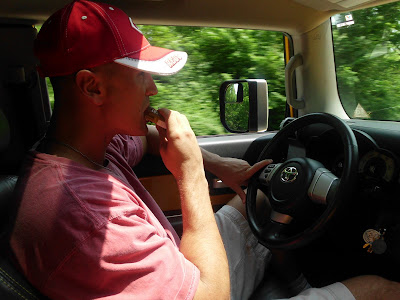 Larry got an ice cream bar at the office – he needed sustenance. Who can blame him right? 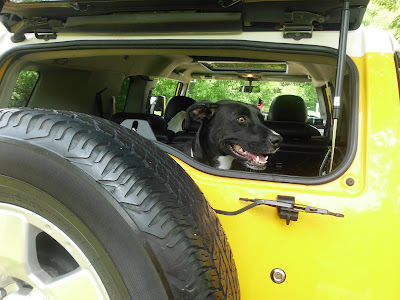 There’s Mysty all excited about the trip! I have to say – you can sort of see it here but she had some CRAZY EYES. She was sooooo excited and had no idea what was going on.

I wasn’t so sure about bringing her on a camping trip – she’s a bit hyper (that’s like saying Kim Kardashian has a bit of a booty). I was worried she would be too much to handle…would my worries be warranted???? 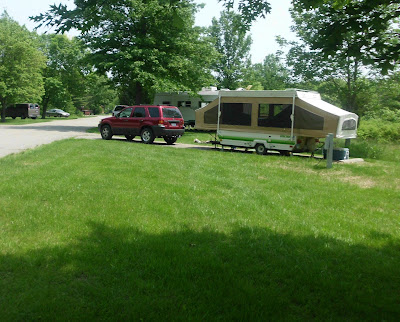 There are our neighbors and our perfect shady spot. 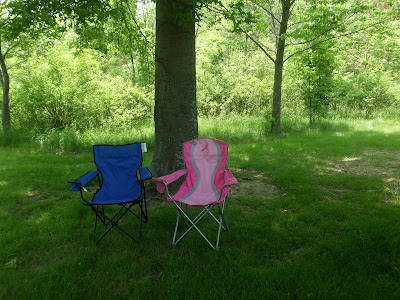 We set up the chairs first – had to have our viewing area set! (thanks Bridget for the chair loan). 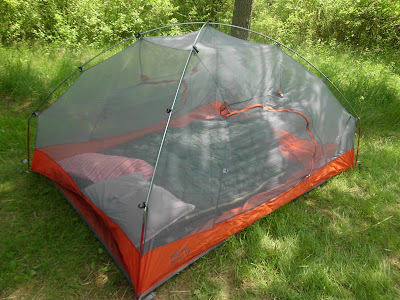 And – after 2 phone calls to Marla – the tent is set up! It’s kinda cool that it’s all mesh so it let’s air in, etc… Luckily – it also had a rain fly which we put on later when we found out it was going to rain. Yikes! Thank goodness we found that out before we went to sleep! 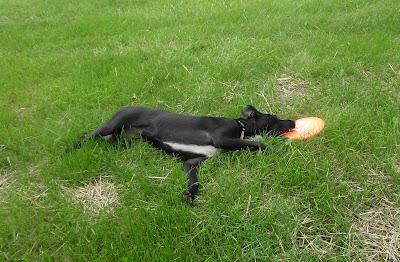 And the answer to the question: Could we handle Dog Dog on the camping trip?

Um yeah. She was fantastic. It’s like the fresh air and open land mellowed her (hallelujah). This was her position about 75% of the time. The rest of the time we were throwing the frisbee (she caught it in the air a few times) or she was escorting me to the bathroom. She’s a great protector!

Taking her made the trip even better – she was a blast! 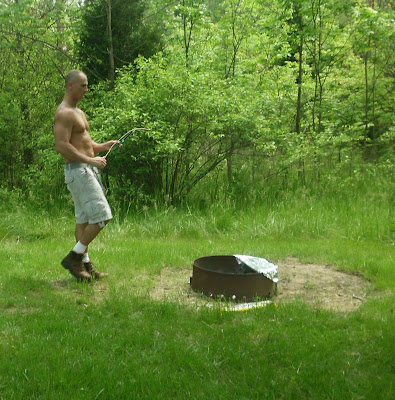 Hubby decided to start a fire – mainly because he was hungry. 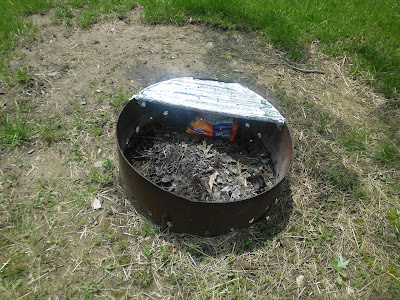 Mmmmm charcoal and a grill! w00t! 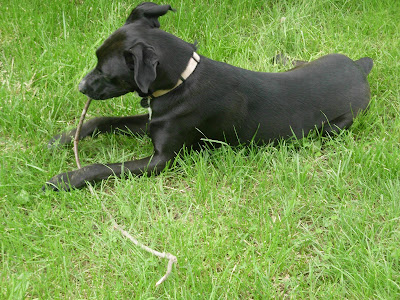 And dog found a stick that was ripe for chewing…this occupied her at least until the hamburgers were grilled…then she turns into “sad eyes begging dog”. 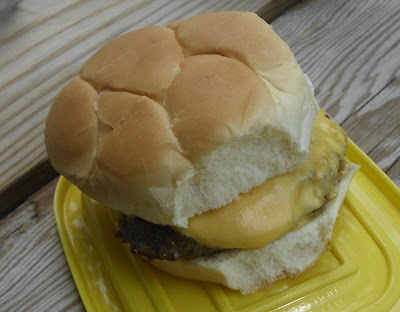 And since this is – at it’s base – a food blog. Dinner is served! Sometimes there’s nothing better than a plain burger with some good old American cheese! 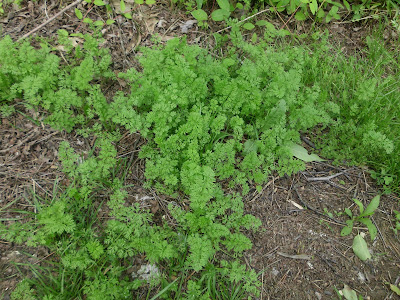 On the way to the bathroom I found that parsley was growing wild. Interesting find! Although it’s proximity to the bathroom made me not want to use it in any cooking…but it still smelled good. 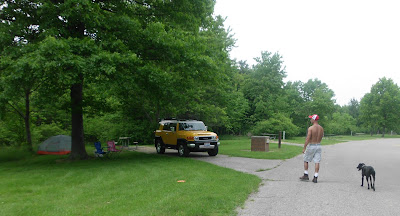 Hubby, dog and I went for quite a few walks around our nook of the campground. It was so peaceful! We had a quiet nook thankfully – a few times rowdy folks drove through looking at spots – but they all wanted to be around other rowdy folks and quickly moved on – woohoo! All I wanted was a quiet night with my hub and my dog. 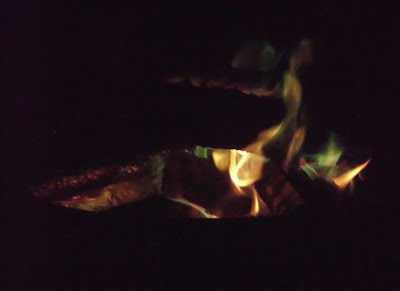 As it got dark – I forgot about taking pictures. Luckily we did stop and buy some firewood – I wasn’t sure how much would be laying around – so we decided to just grab a bundle at the store by the campground – it was only $4. Came in very handy!

We also made s’mores – I’d never had one (shocking I know) and Larry was very excited about them. He’s an expert with the flaming marshmallows.

The video is just a few moments of fire – who doesn’t love a crackling fire?! 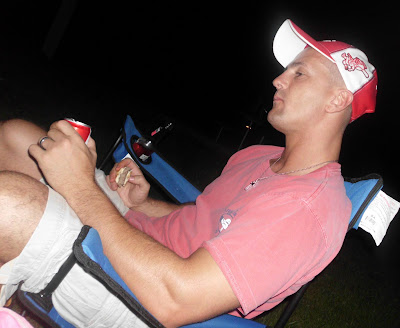 And there he is – just relaxing after his s’mores and finishing off one more hamburger.

Why Should You Go? Well if you like the outdoors and tranquility – then you should try camping. I had a fantastic time and am itching to get our own gear and go again – like yesterday!!!!

Any recommendations from folks on good spots? I know Red River Gorge is on the list…

And hey – if anybody has a tent, air mattress, chairs, etc… that they don’t use and want to unload – let me know!!!