On my recent tour of Cleveland, thanks to Positively Cleveland, we ate a LOT of food, like INSANE amounts of food! They took us to the Tremont neighborhood and the very popular Lucky’s Cafe for Saturday brunch. 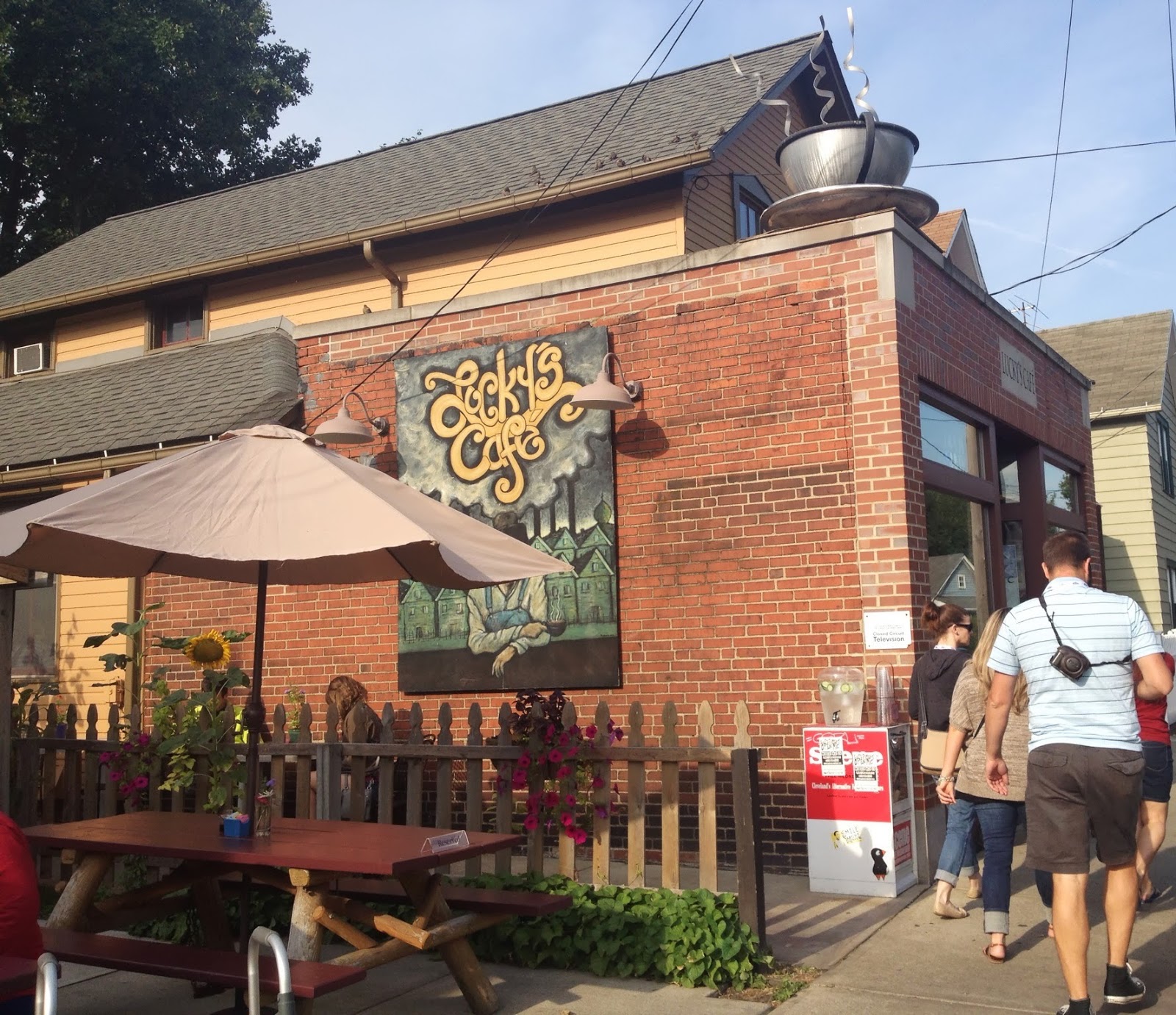 They made us get up and going a little early because Lucky’s gets packed REALLY quickly! There’s also a really pretty outside area to eat at next to their garden. 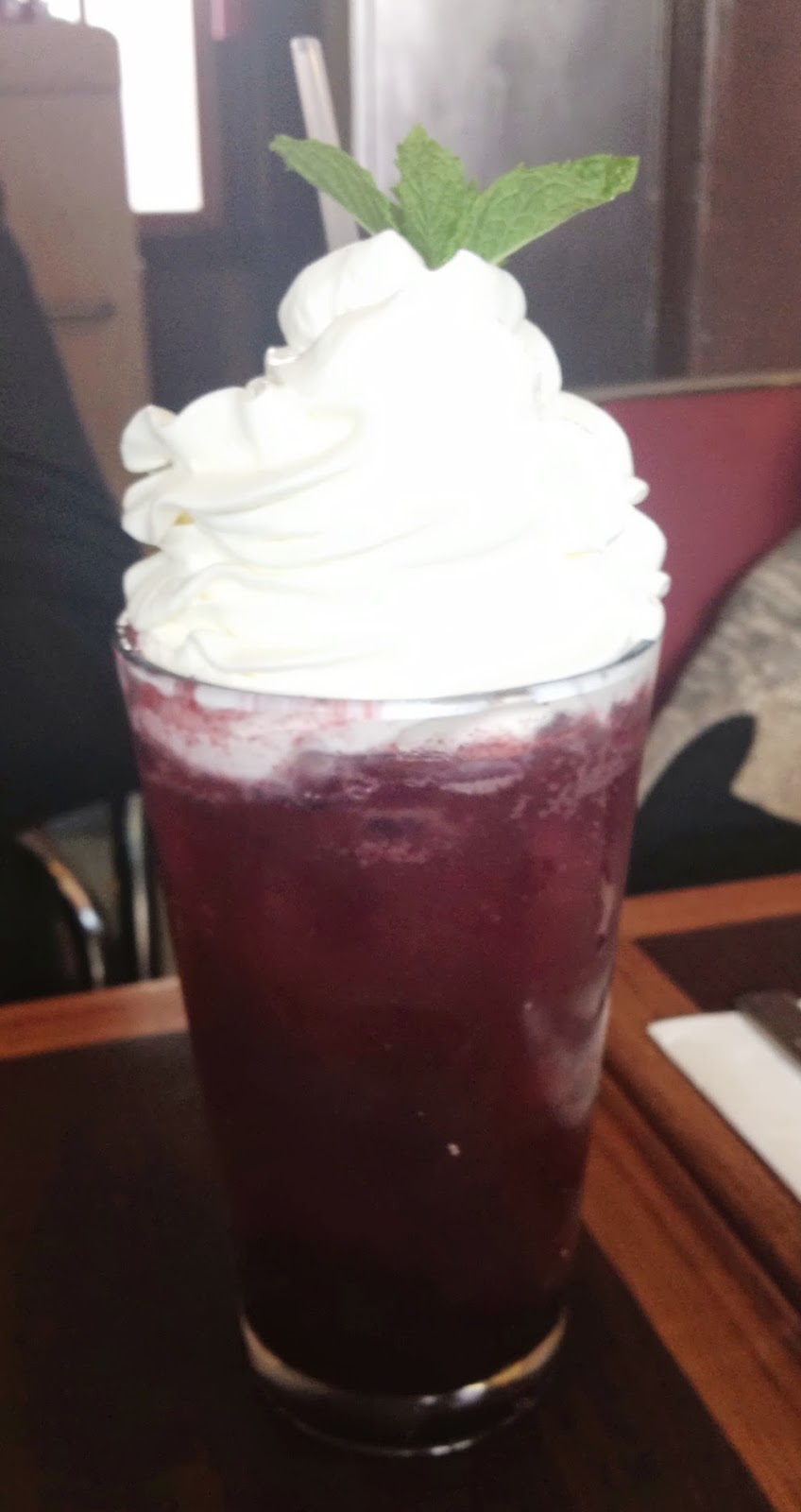 This was some sort of blueberry drink they had on this Saturday morning and we quickly learned that everything at Lucky’s is crazy, huge and out of control! 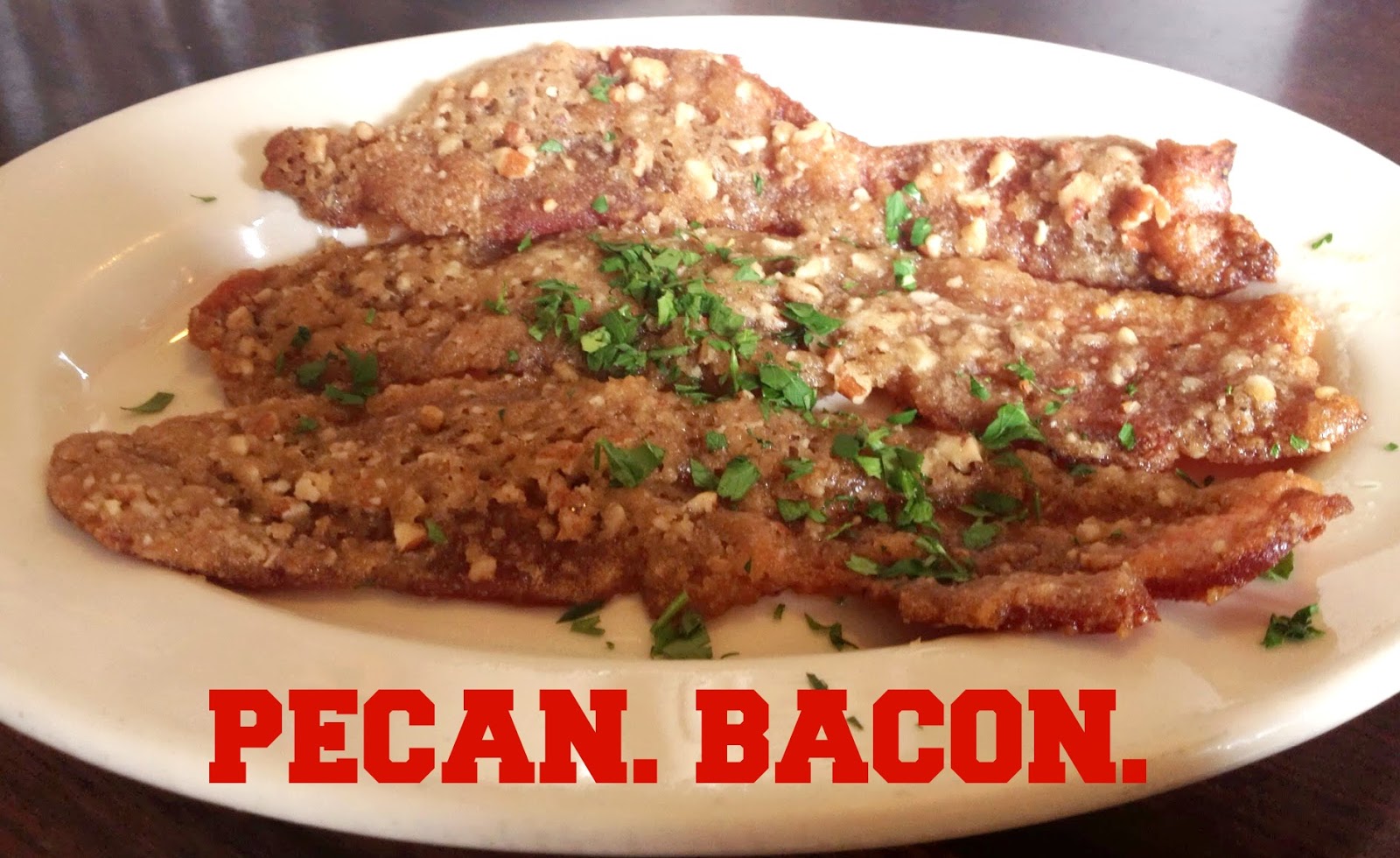 Three thick slices of naturally cured bacon topped with pecans and brown sugar. Cuz yeah – bacon isn’t good enough on it’s own – it’s needs pecans and brown friggin sugar. Holy cow – this was amazing! It was really thick thick bacon and then you load it with this salty sweet decadence. Yeah – Cincinnati – you’ve been served…PECAN BACON. (Seriously – somebody needs to do this here – Virgils?!) 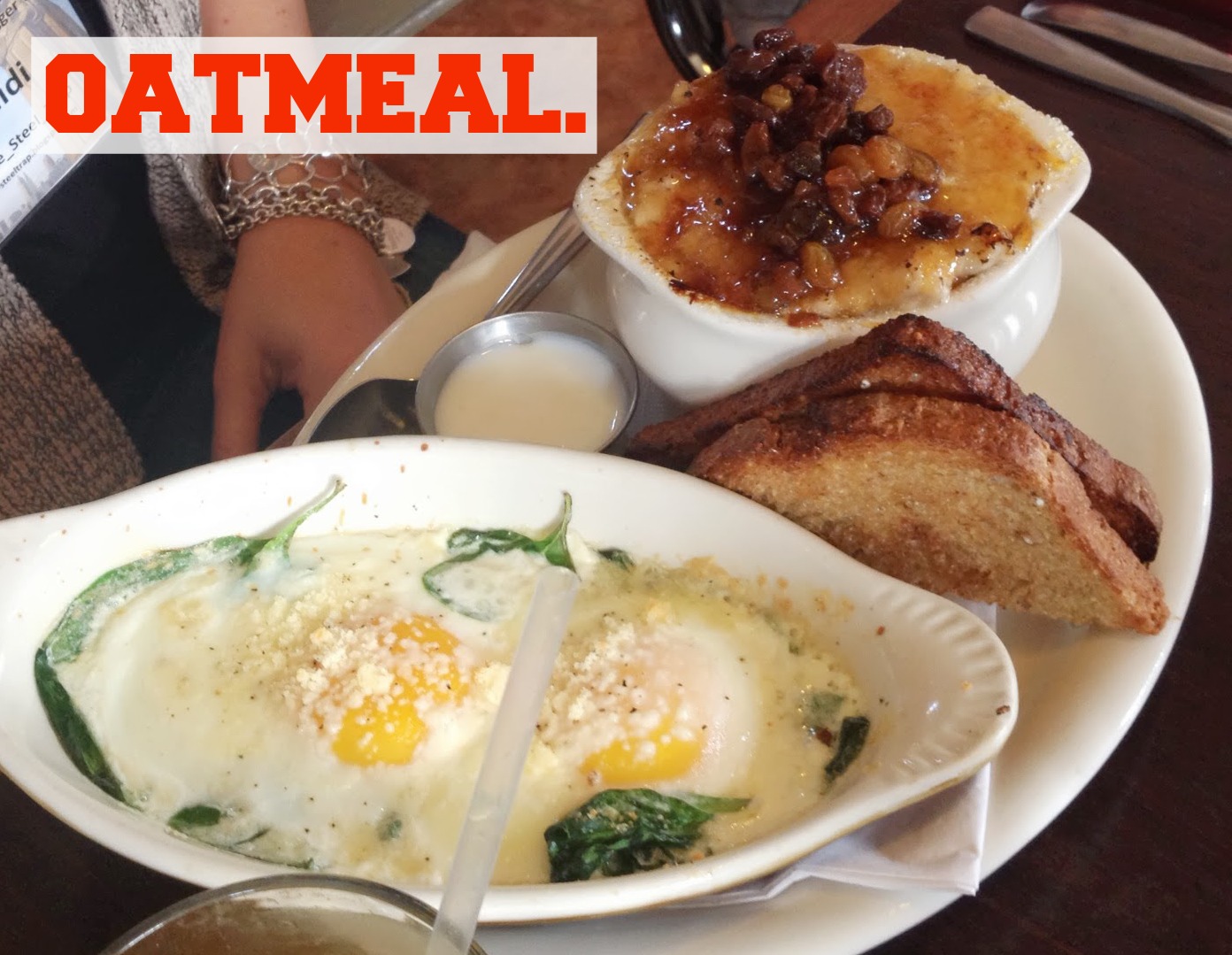 Next up Oatmeal. Seriously – when my blogging friend ordered oatmeal and I saw it was like $10 (can’t remember exactly) – I thought – $10 Oatmeal???? Um – okay. I get it now. Bruleed Steel Cut Oatmeal topped with winter fruit compote, served with eggs en croute and a side of toast. Bruleed. Oatmeal. THAT I might be able to eat. 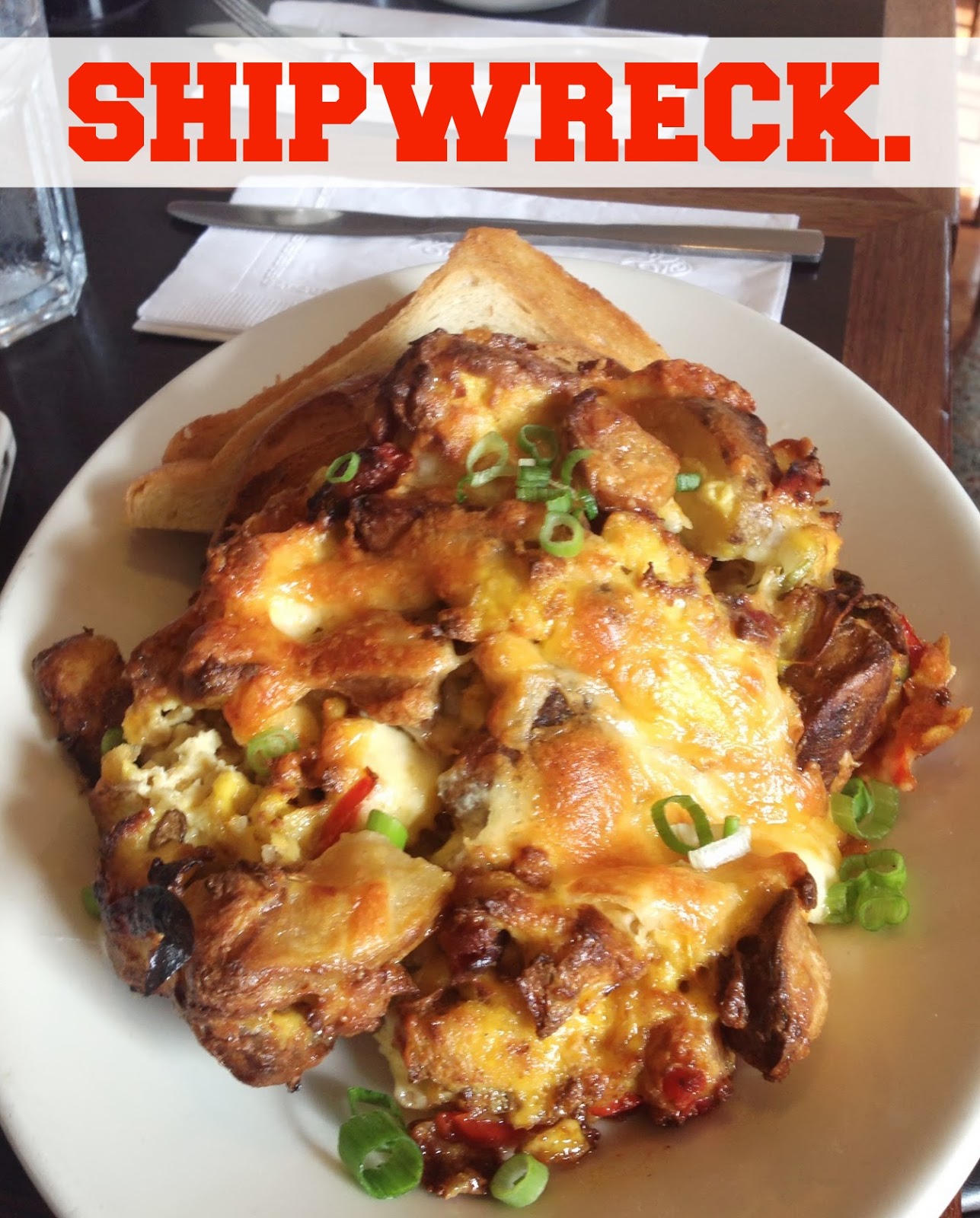 Now the Shipwreck – a giant plate of hasbrowns, eggs, veggies, bacon and cheddar cheese served with toast and fresh fruit. Every breakfast was just OOC (out-of-control!!!). 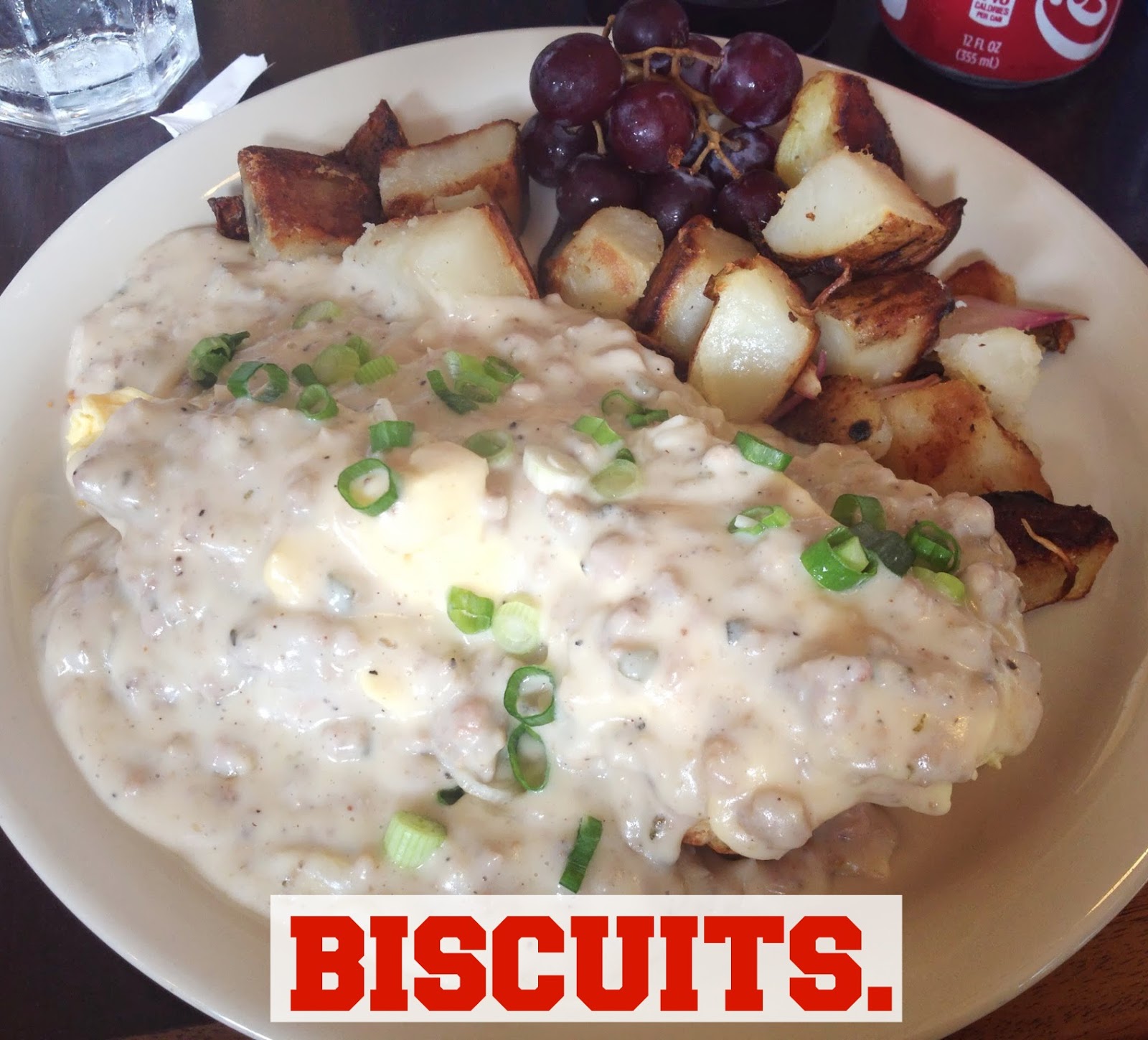 I got Biscuits & Gravy – sounds harmless enough – right? Um – well – not so much. Cheddar scallion biscuits topped with soft scrambled eggs and sausage gravy then served with hash brown potatoes and grapes. It was really good – I definitely couldn’t finish the plate. I really liked the gravy – but wasn’t loving the eggs mixed it. Surprisingly the grapes really helped – it was a pretty heavy breakfast (ya think) so the grapes gave it a nice break. 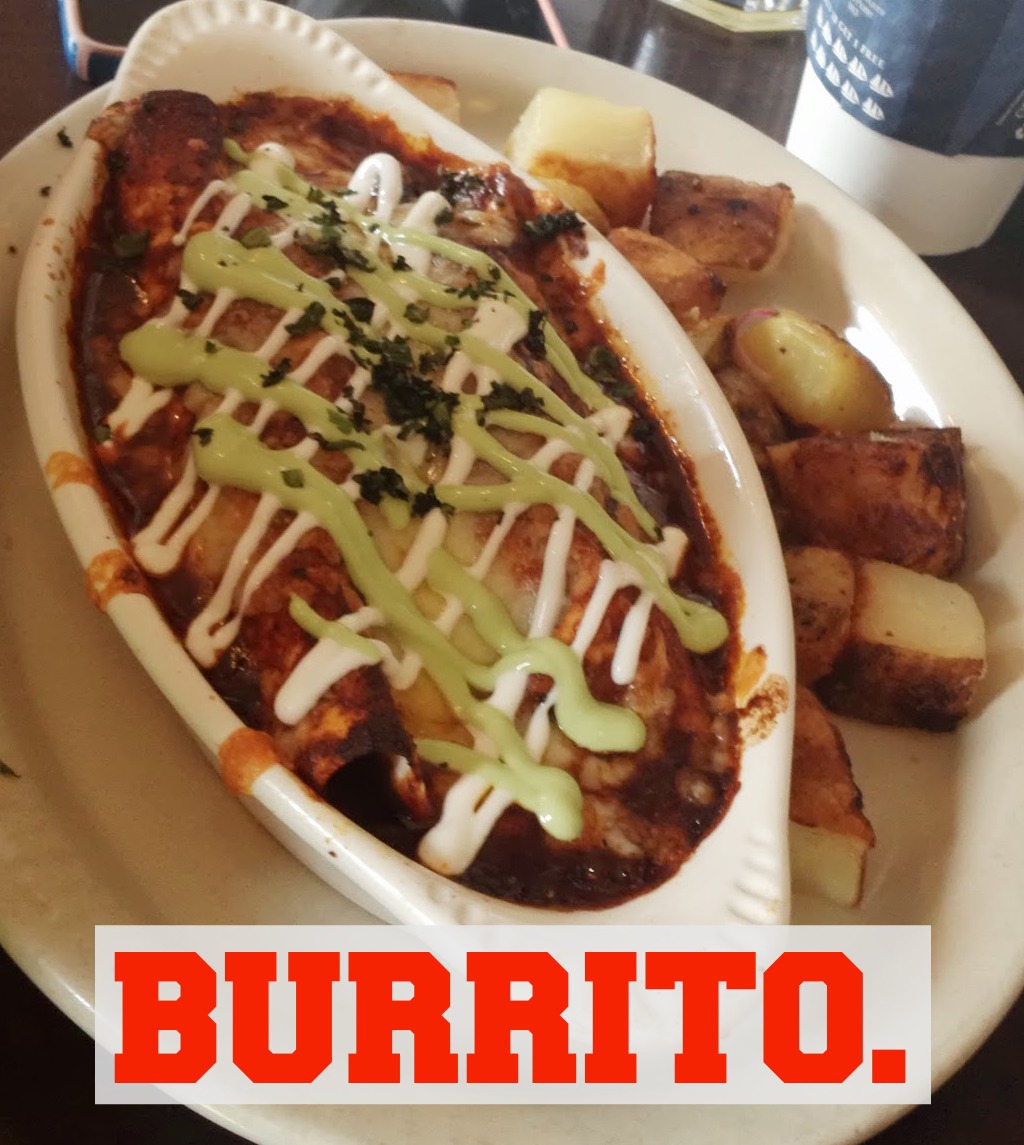 Melissa got the Breakfast Burrito – veggie scrambled eggs rolled in flour tortillas covered with guajillo pepper sauce and cheddar cheese – served with hash browns. She had ordered this on a previous trip to Lucky’s and knew – it was what she had to have again. 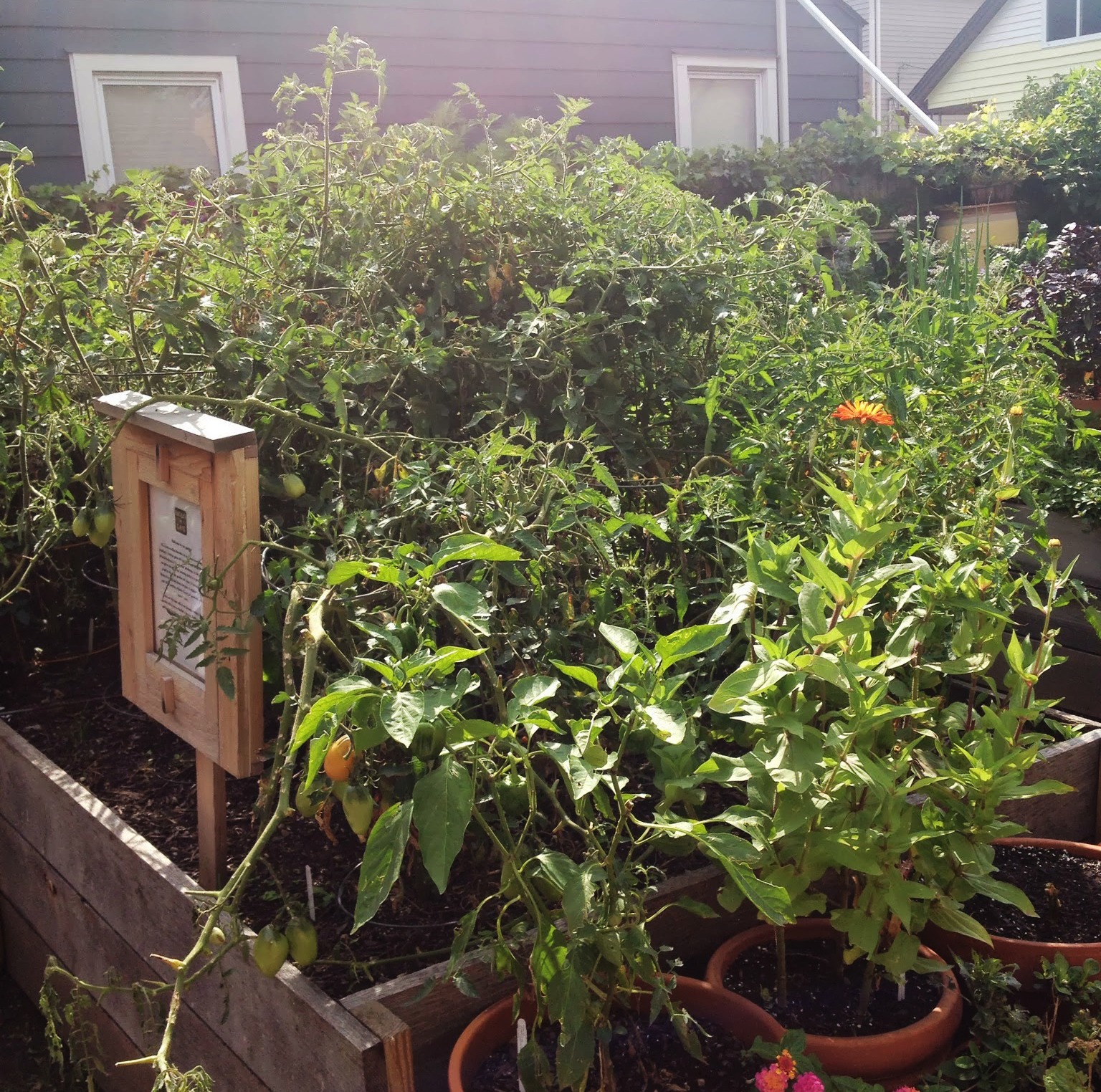 Lucky’s supports local farmers and has a nice garden of their own. It definitely gives you confidence in the food their serving when you see the growing your breakfast on the patio! 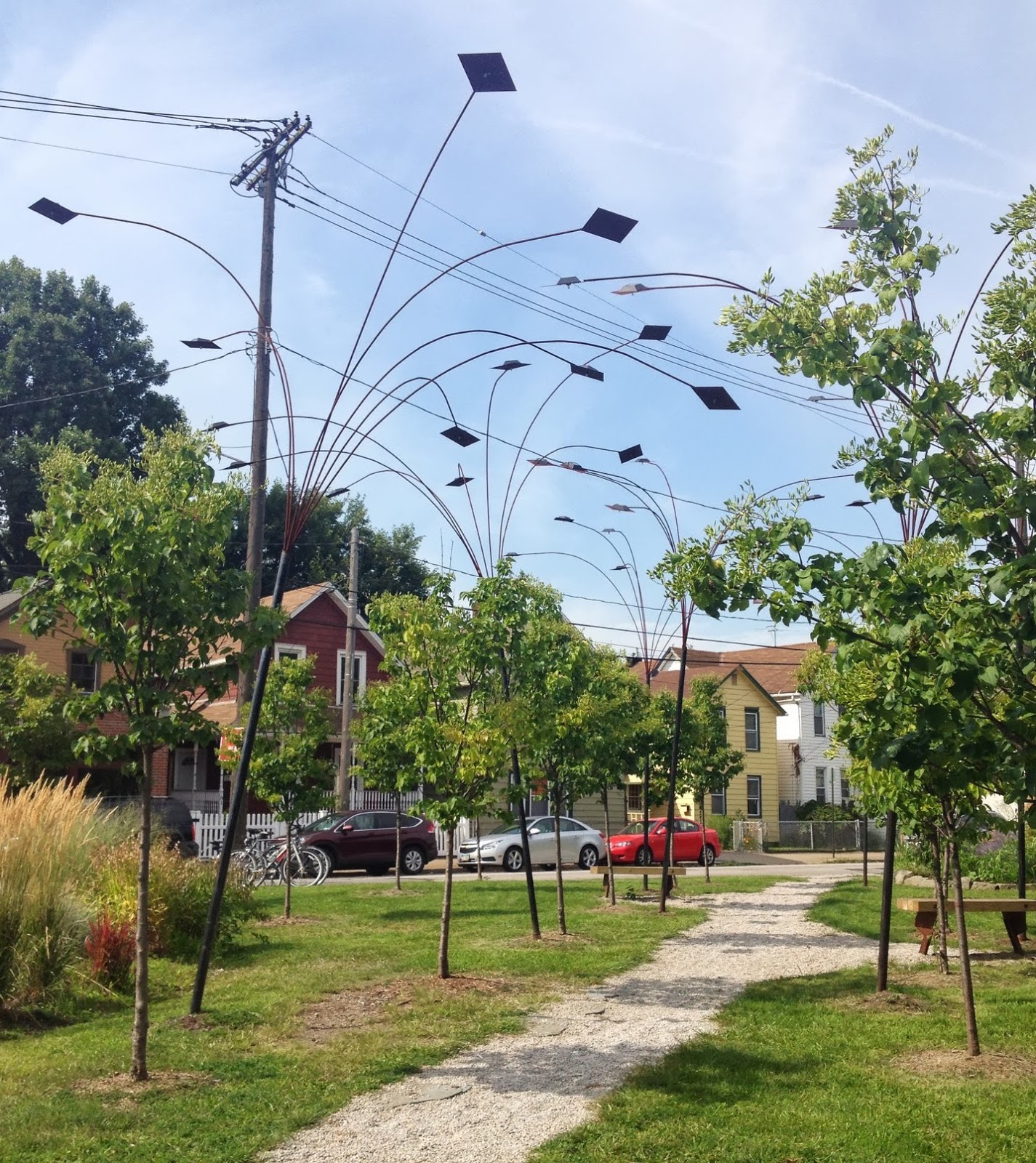 Across the street from Lucky’s is a cute park with some funky solar lights – it would be nice to walk along the path at night. Tremont is a historical neighborhood that had a rough patch but they have really redefined itself in the last ten years with a huge revitalization effort. 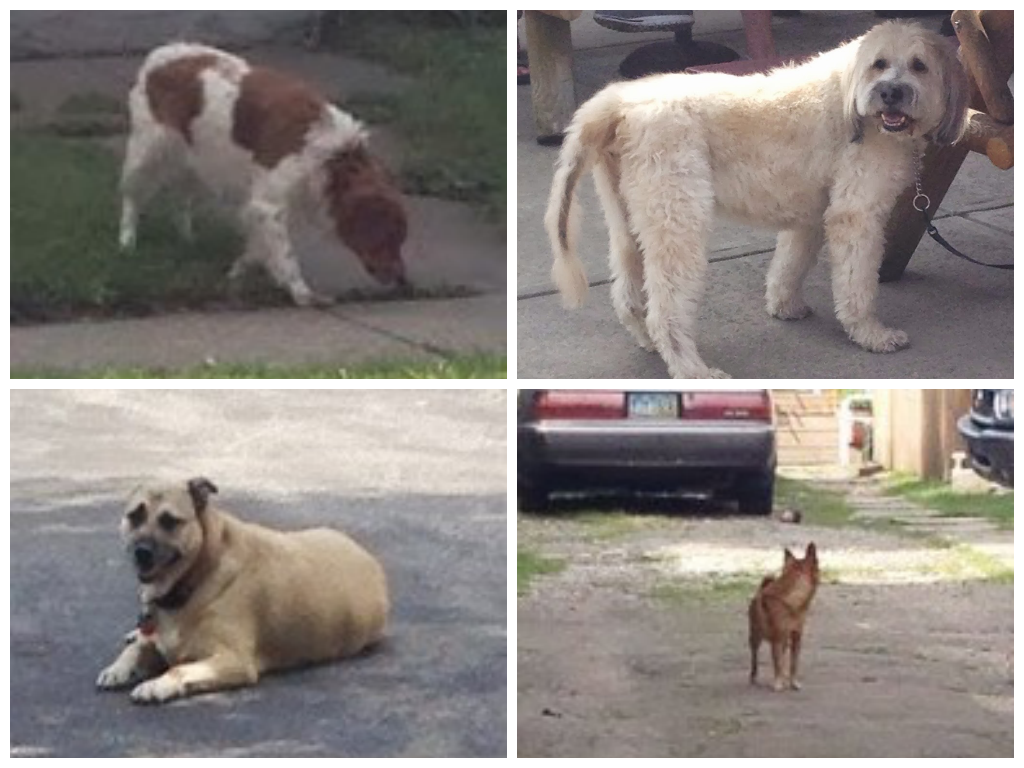 And since I was in the Dawg Pound city – I had to take pics of every dog I saw. These were just on the walk from Lucky’s to… 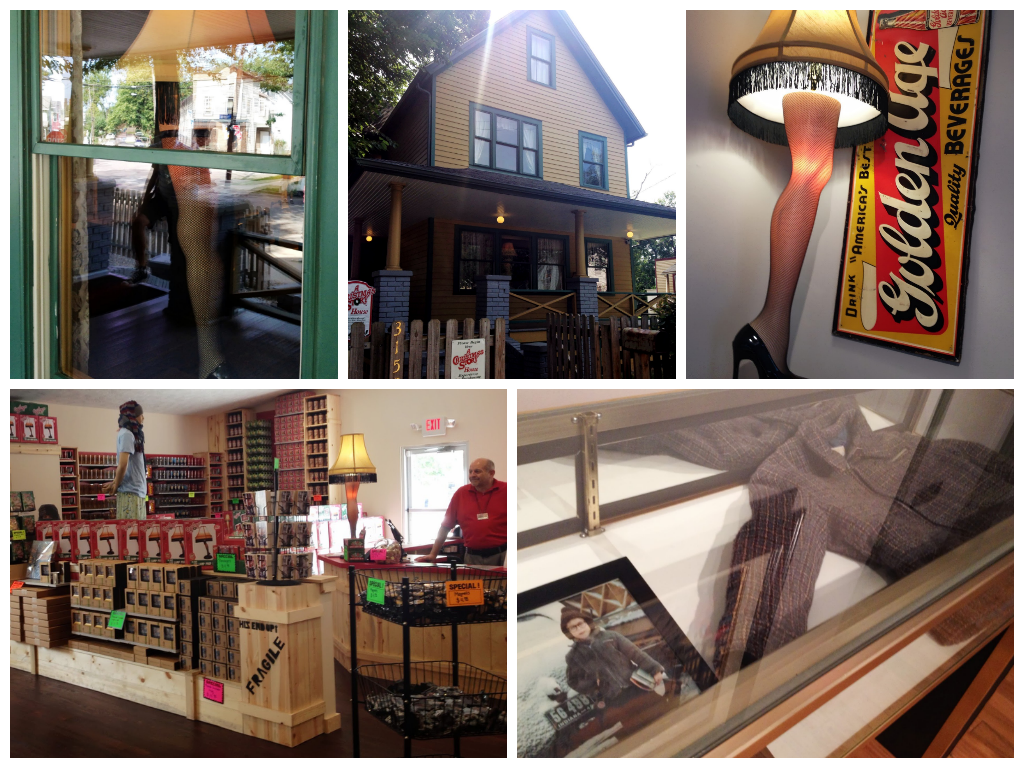 The Christmas Story House!!! It’s open year round for tours. We didn’t have time to go for the official tour but we got a picture in front of the house and stopped at the gift shop across the street. Pretty cool to see a piece of cinema history.
Why Should You Go? Lucky’s was amazing! It’s a bit of a hipster place and you could definitely see it in Northside if it were to be transplanted to Cincinnati. The brunch is not to be missed – especially that Pecan Bacon. I may need to go back – I can’t imagine what they do to a Rueben!