We’re up to Part 5 in my series of Cleveland Rocks blogs – thanks again to Positively Cleveland for the amazing trip. I had so much fun – not only did I find so much to do in Cleveland – it gave me a greater appreciation for all the cool stuff we have here in Cincinnati too!
Our next stops were the Cleveland Museum of Art and Tommy’s Restaurant in Coventry. These were voted on by fans of Positively Cleveland on Facebook as things we HAD to do. After – I could not disagree! 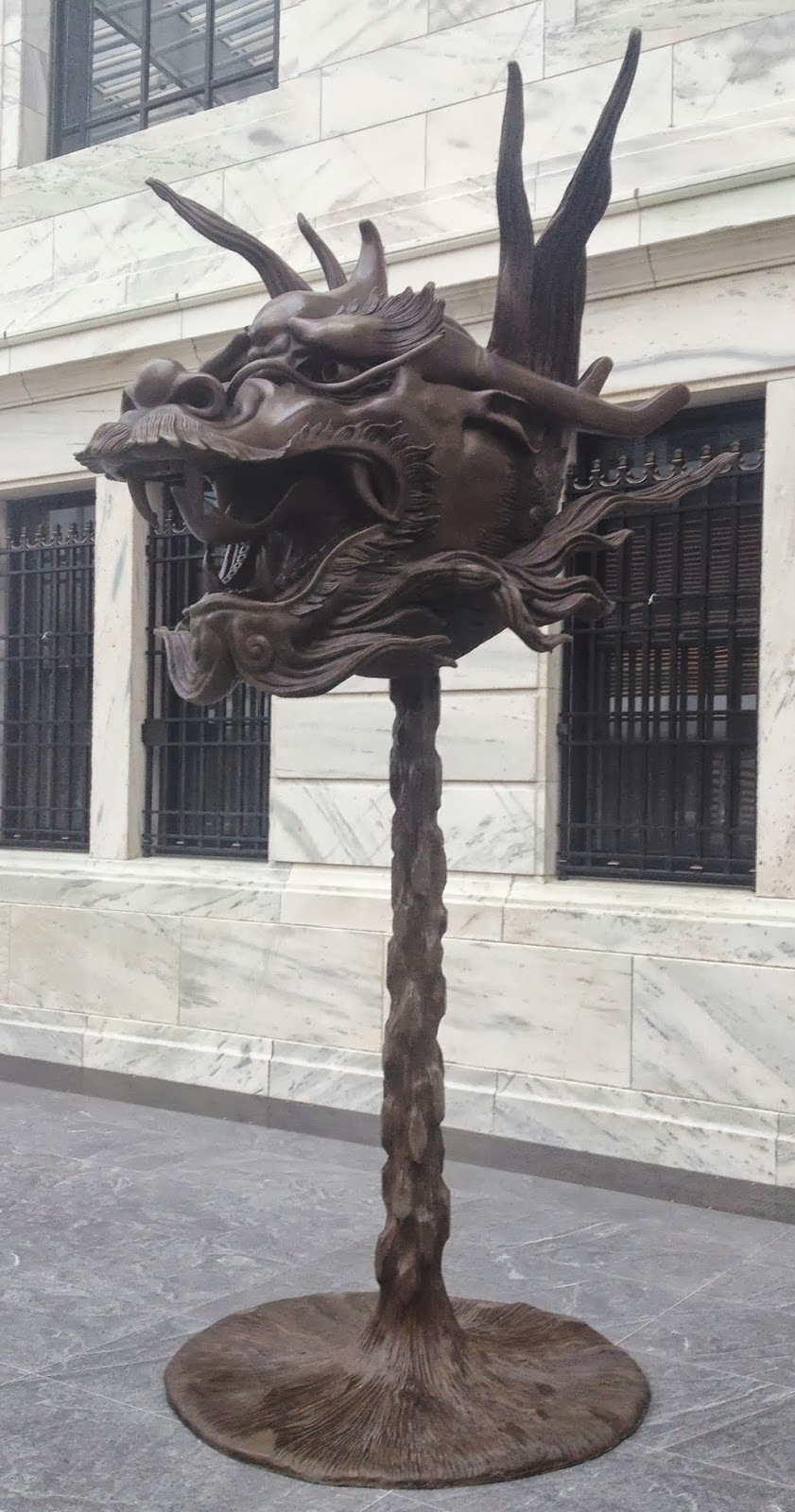 First up was the Museum of Art – it’s HUGE!!! After going through the first area – there’s a huge open space (with a roof) that is so pretty and is a park in the middle of a museum – but a park with a roof! And in open area – they have these huge animal heads on pedestals. I thought this one looked most like me in the morning! Or at least what my breath probably smells like.

Next up we went out to the garden and there was an amazing piece of art – Rodin’s The Thinker. What I didn’t realize until just now – there are actually 28 of them made from the one cast – around the world in museums. I had no idea – I always thought there was just 1! And when you see something this iconic – you have to imitate it. 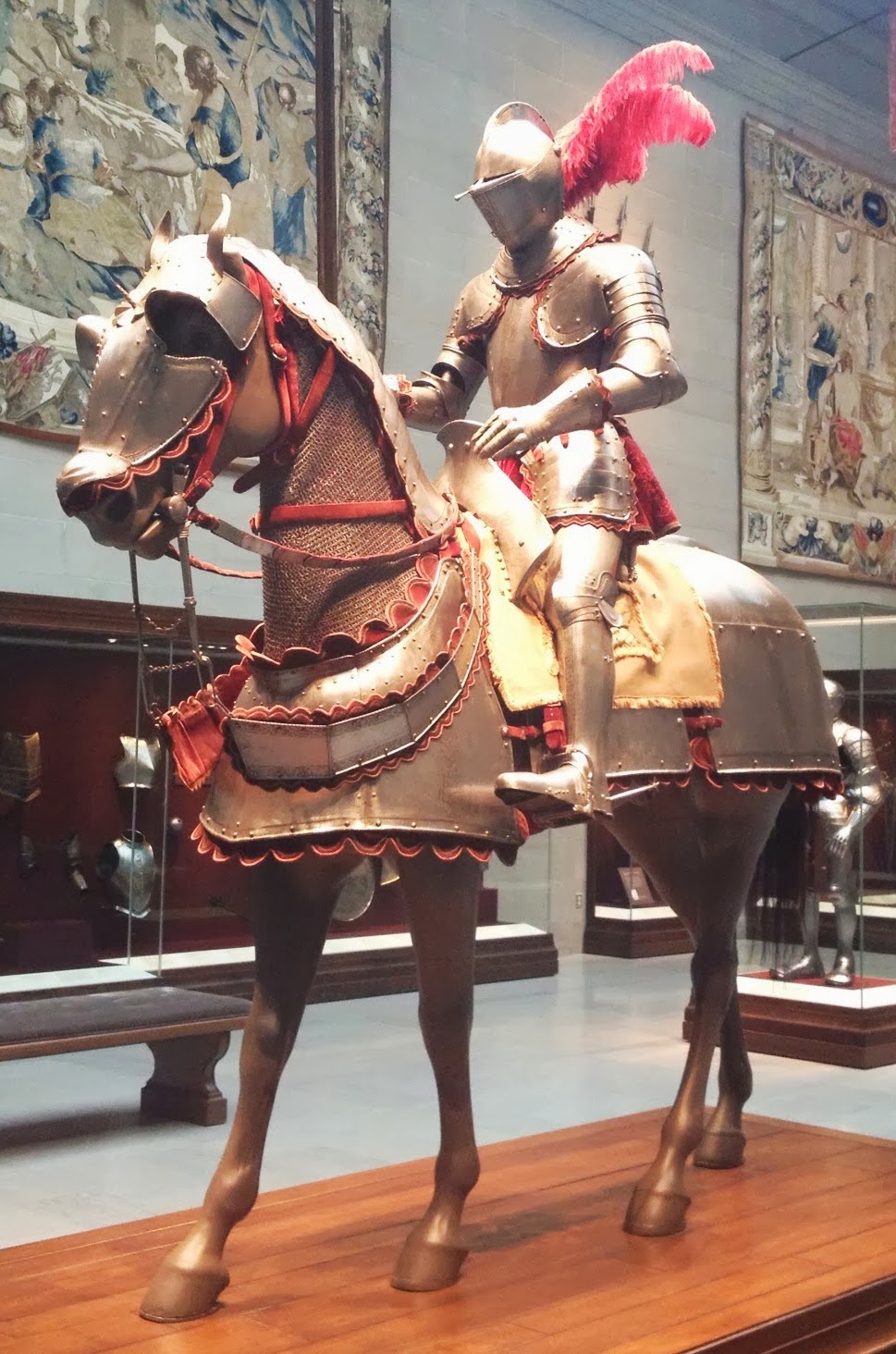 Inside their special exhibit right now was all about armory. If you happened to see my Ren Fest blog post – you’ll know I love jousting – so this was fun to look through. 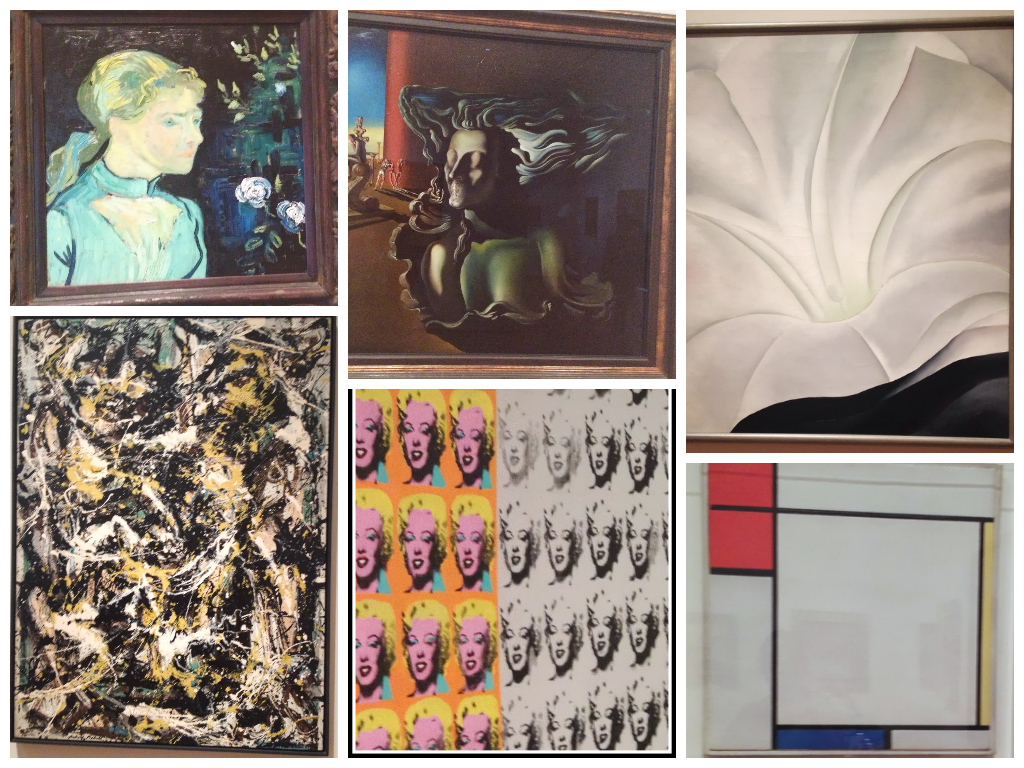 I don’t consider myself “art educated” – I don’t know much – but I know a little. I loved just walking through the museum seeing ICONIC pieces and feeling really smart saying, “That’s Mondrian!” (which I learned from Trading Spaces). How many of the 6 artists can you name? (answers at the end of the blog post) 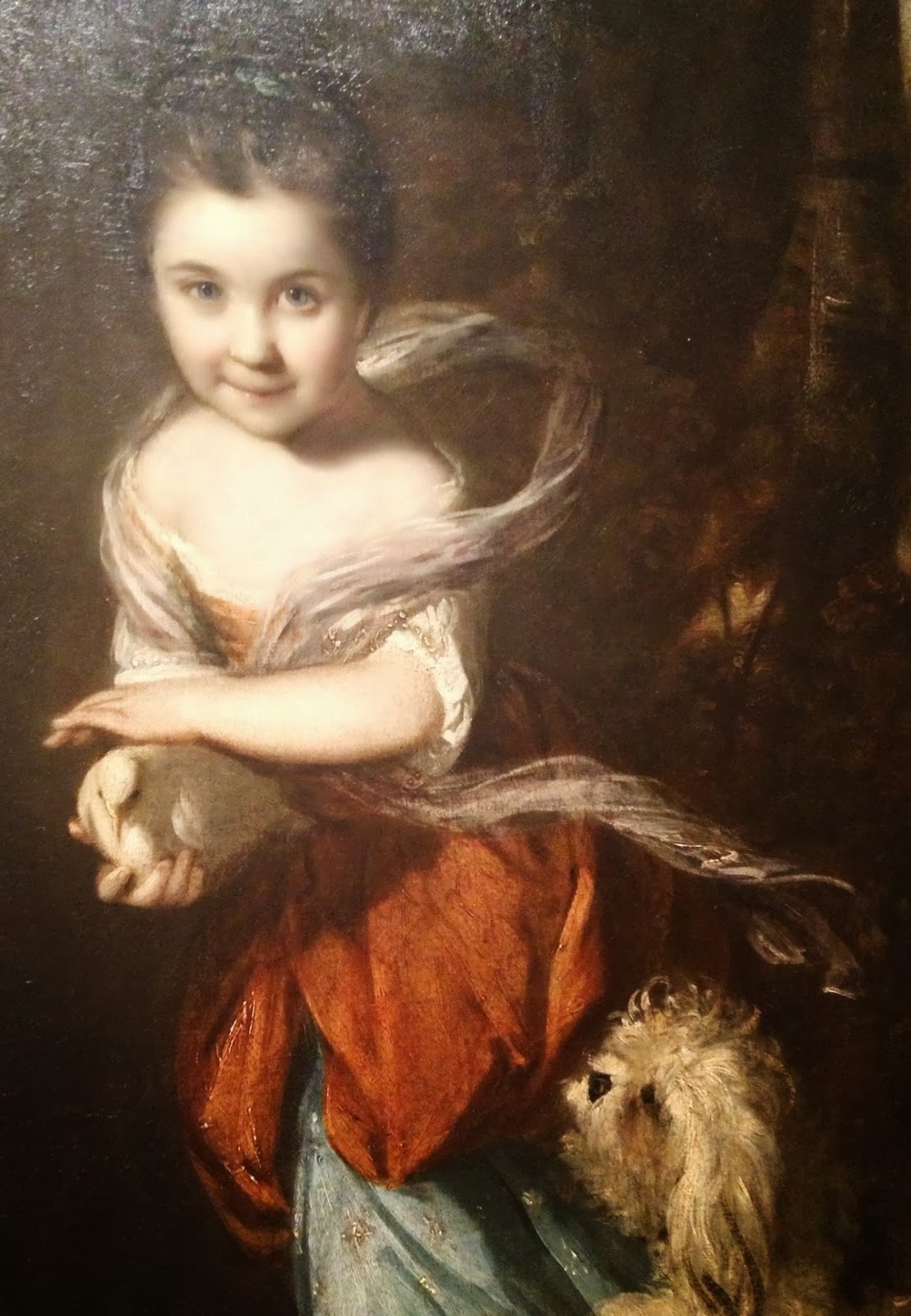 Beyond the amazing – there’s always that one – that one that completely creeps you out and follows you no matter where you go. Yeah – this girl creeped the bejeebus out of me!

Cleveland’s Museum of Art is also free – like Cinci – so a great stop for families. They also have some interactive exhibits. There was just so much there – it was a great stop! Then, after we toured as much of the museum as we could in 2 hours – we were HUNGRY! So we headed off to Tommy’s! 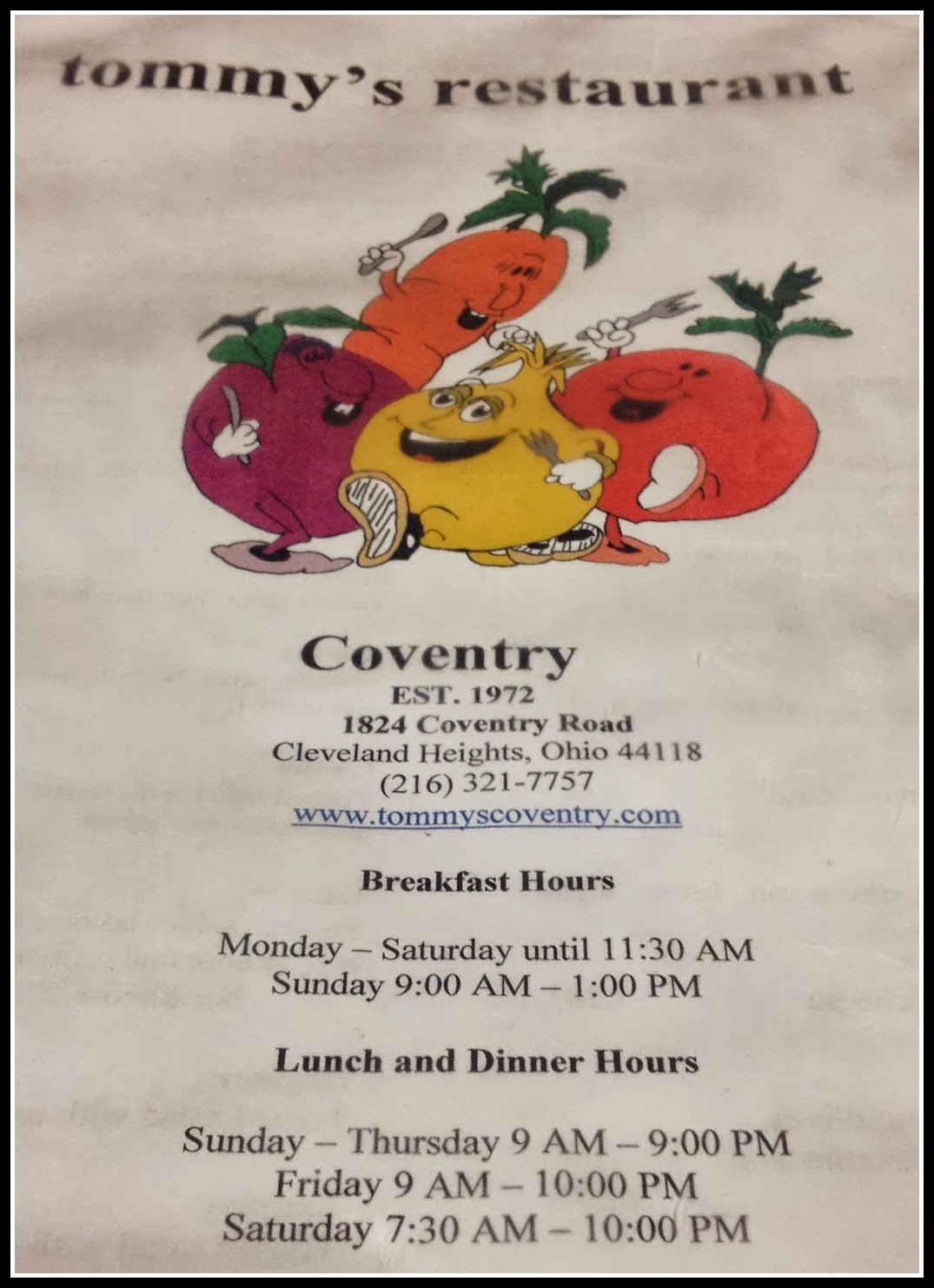 Tommy’s is the kind of place you’d find in Northside if it were transplanted to Cincinnati. It’s a little hippy – or maybe even Yellow Springs. Tommy’s sources a lot of it’s food locally from produce to breads to the ice cream in their famous shakes – all from Cleveland. 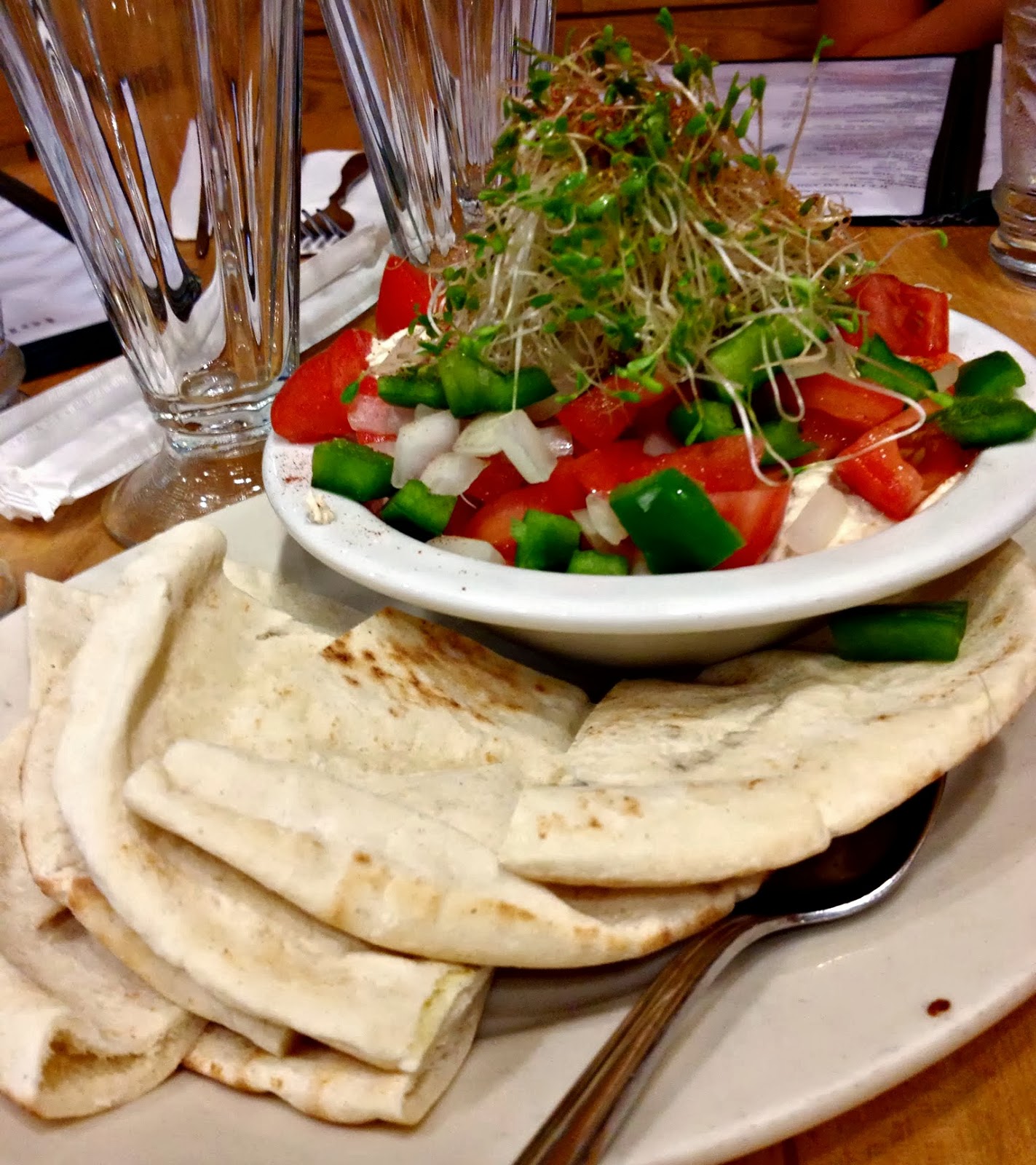 We started out with hummus (or homos as they call it) – which came with pitas and veggies ($8.50). This was delicious and delightful hummus. The added veggies piled on top were sooooo good! It was  a new way to eat it and was awesome! Restaurants that serve hummus – take a cue on this one! 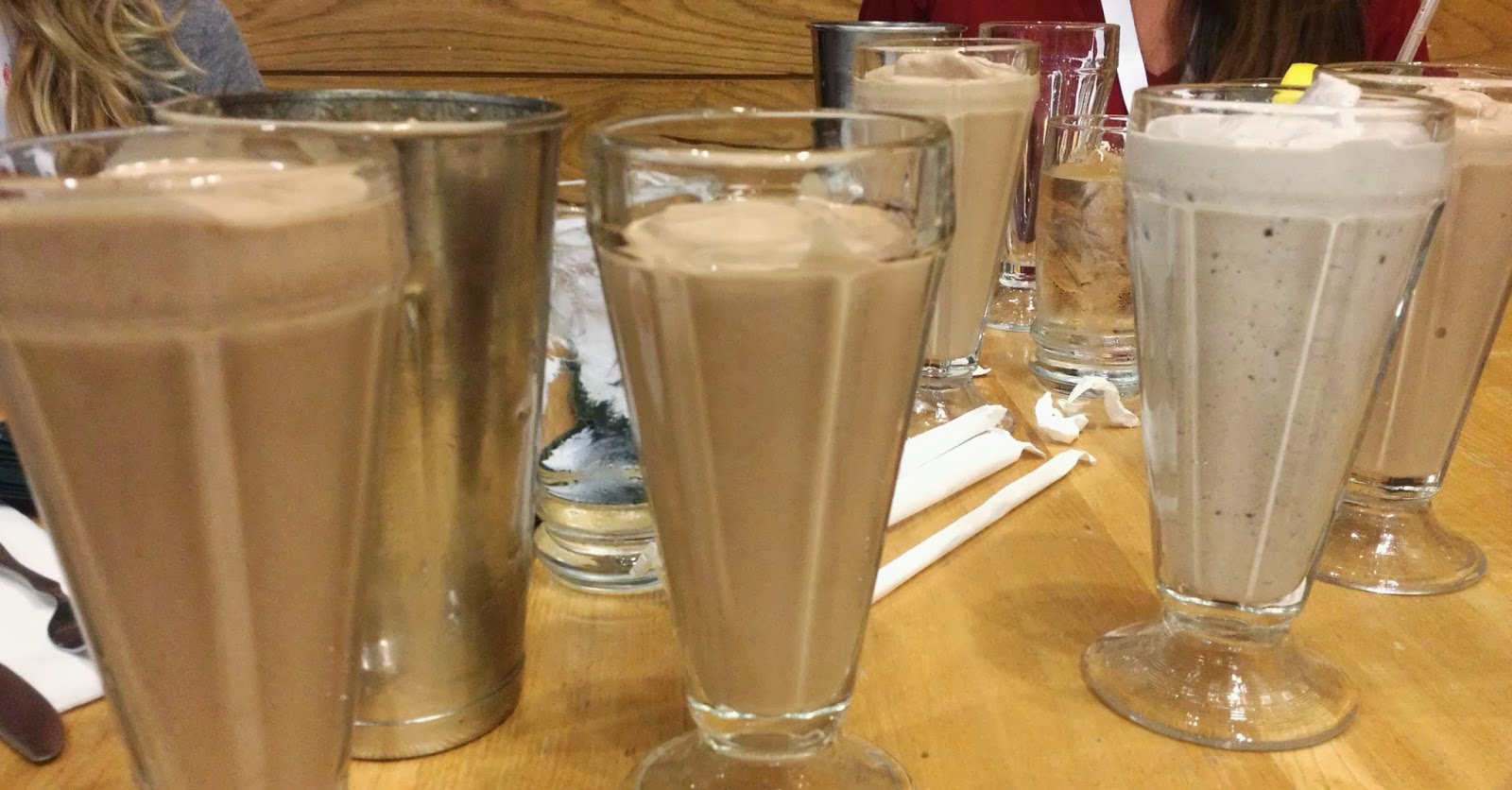 Tommy’s is known for their shakes – we were warned and prepped. I can’t say I’m lactose-intolerant – but I can say – my stomach thinks I am. We got a variety and just all shared – which was great because we got to try different ones – there was cookies & cream, plain chocolate and… 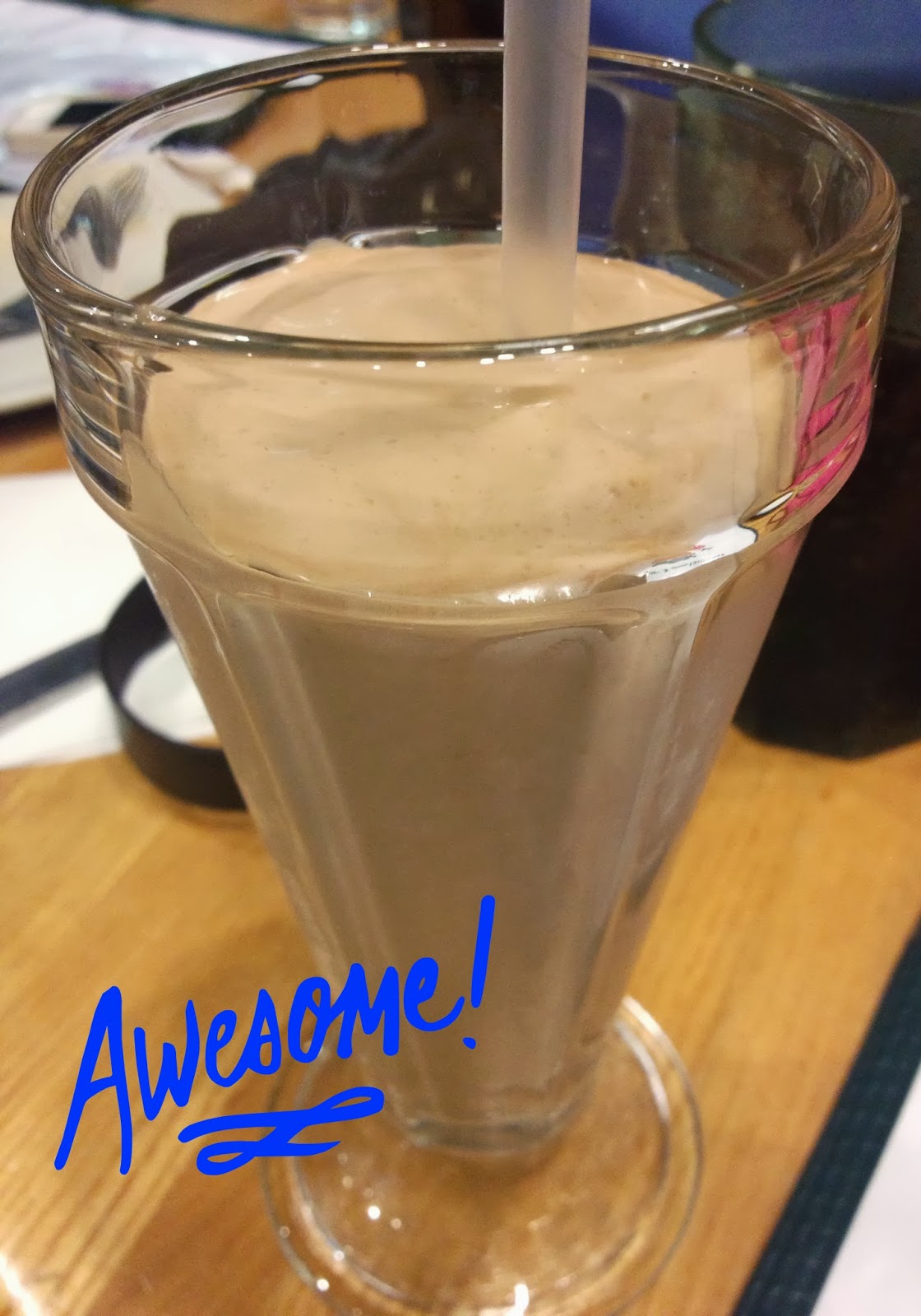 …a Tofutti Chocolate Peanut Butter shake. Tofu – in my shake. Seriously?! But the girls from Positively Cleveland promised me it was good. They did not steer me wrong! While in a side-by-side comparison – I still preferred the real ice cream – but if you were to just drink the tofutti one – you really wouldn’t miss the ice cream. It tasted like a milk shake! The texture was a little different – but mainly you just didn’t get the lumpy ice cream part that sort of goes back together after a shake sits a little while. Shakes are $4.99 but Tofutti shakes are $6.99. $2 to skip an emergency trip to the lieu is a small price to pay. 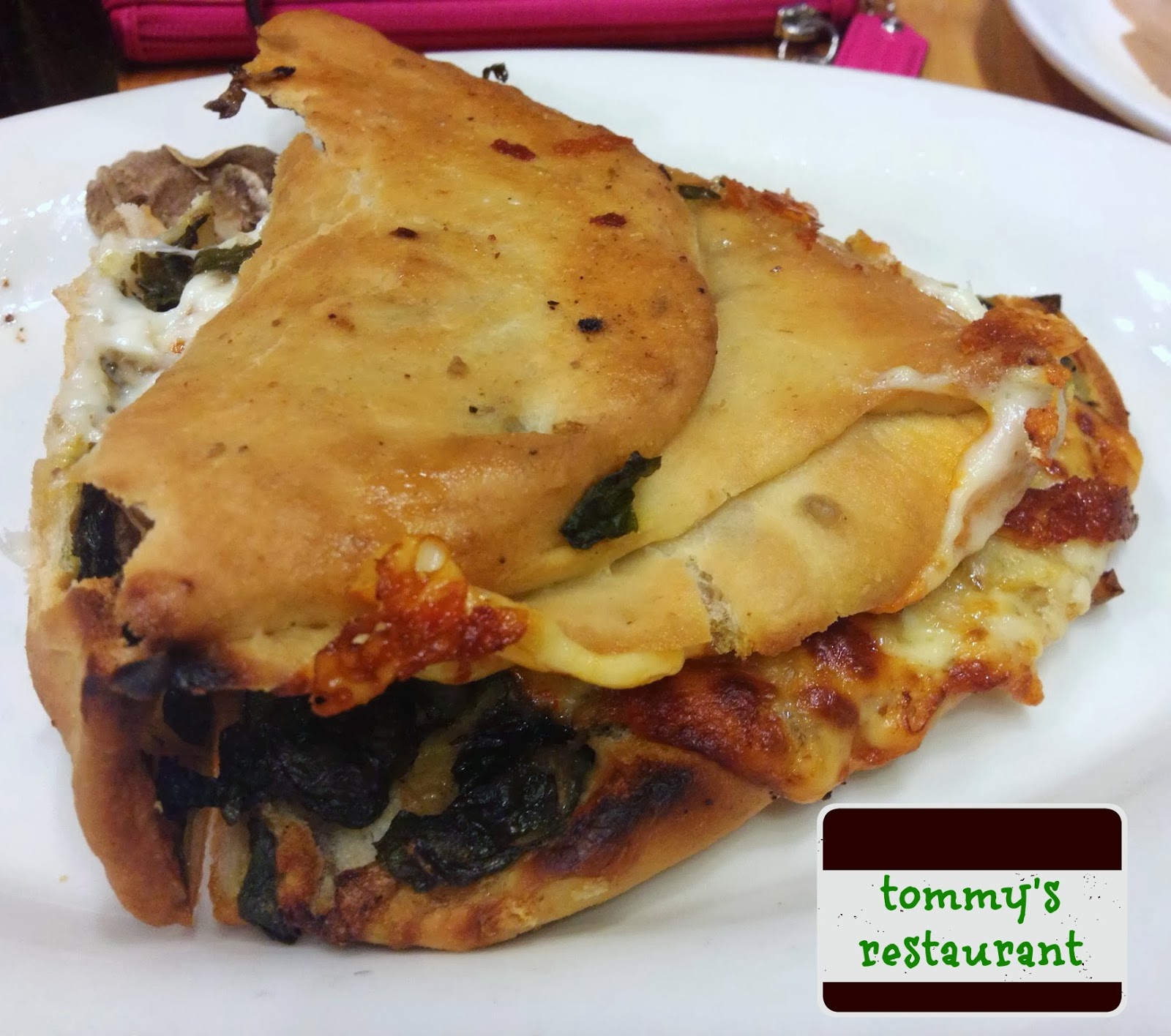 Then I was introduced to the wonder of Tommy’s pie. They have sandwiches, schwarma and so much more – but I was intrigued by this PIE. They had so many varieties – and the one that grabbed me was the IRS – spinach, mushrooms and cheese ($7.40).

This was as delicious as it looks – the “pie” was crispy, the cheese was melty and crispy where it needed to be and then the veggies were fresh and cooked to perfection. This pie is HUGE and I definitely couldn’t finish it when combined with my shake mixture. 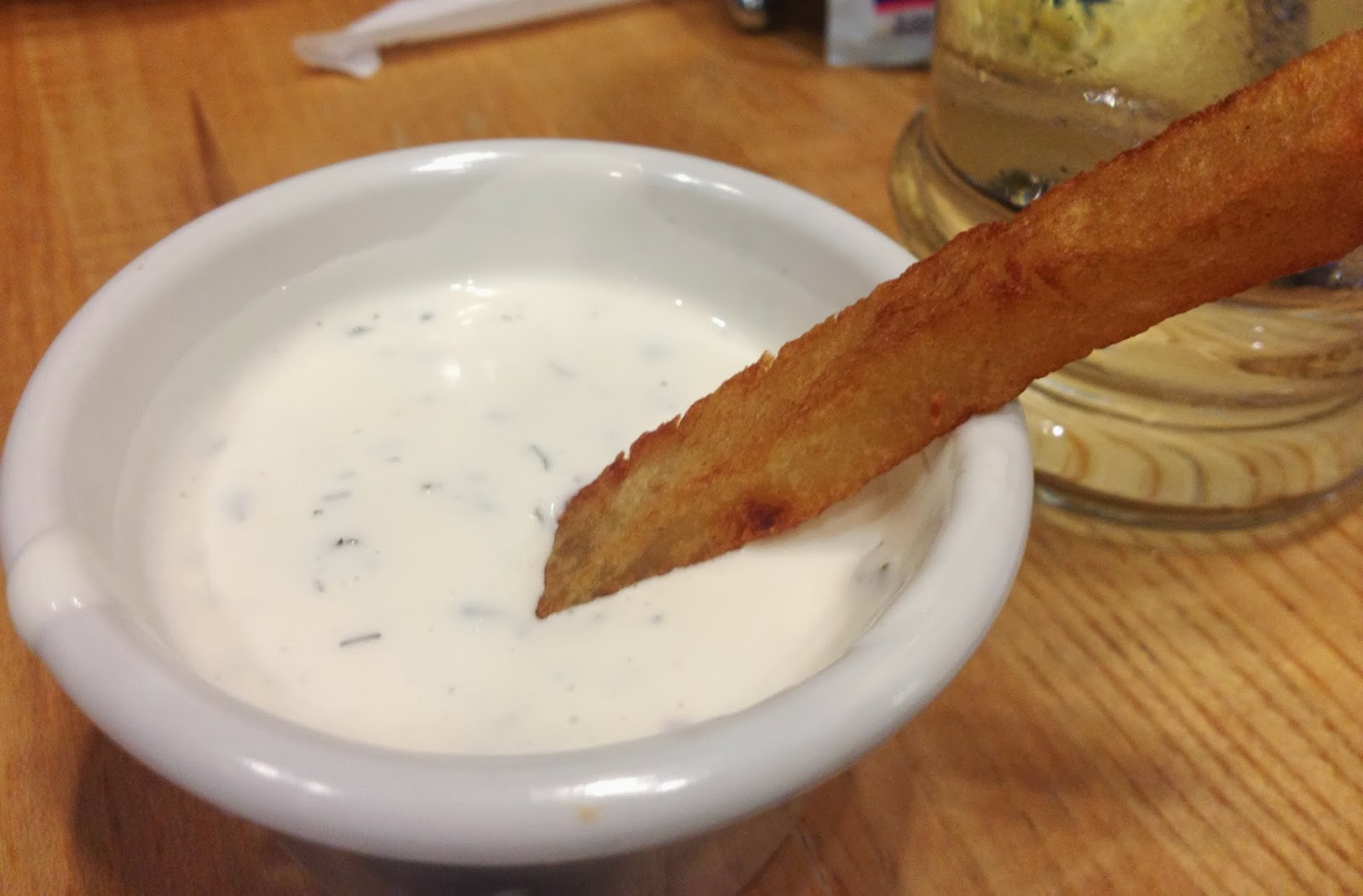 We also heard the fries were great – so we ordered a side of them (12 oz – $3.79) and I asked for my patented side of ranch. The fries were Penn Station-y and the ranch was just plain awesome! If the ranch is great – I always make sure to take a picture – so I remember to mention it. Penn Station-style fries with great ranch = Happy Hussy!

Why Should You Go? Tommy’s was a great stop and the menu is huge – so I could probably go back every day for a week and try something new every day. It has a bit of a “granola” feel and also a heavy mediterranean influence. I wish I could get that pie again – it would definitely be something I would stop for again and again.

Disclosure: The trip to Cleveland was provided free of charge by Positively Cleveland but all opinions are my own.