Hubby – like most men I know – watches three channels on cable: National Geographic, ESPN and The History Channel. I can’t tell you how sick I am of history! But when I saw one of the Daily Deal sites offering a 2 for 1 on the Civil War Tour – I had to grab it. 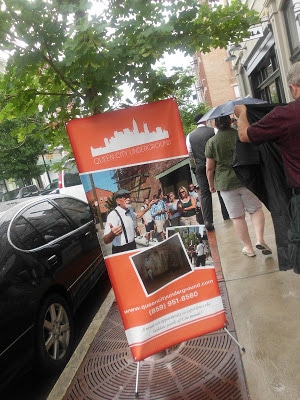 They have an office in OTR at 12th & Vine – our tour started there. They have a cute shop with books and other knick-knacks for sale. They also do the Gangster Tour – which Larry is now very excited about as well. Other tours include a  Queen City Underground and Haunted Tours in October (again – I think we’re going to be regulars here.) The girl at the counter said they’re also working on a Dessert Tour (ala Columbus Food Adventures).

Side plug – If you like food and have a Saturday to kill – go to Columbus for a tour – it’s a fantastic deal and a lot of fun! 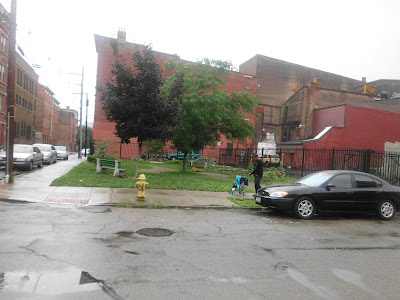 The Civil War tour is a walking tour around Over-the-Rhine. It gives you a different perspective of the neighborhood that’s in such flux. It was nice to see a little park in the middle of it. 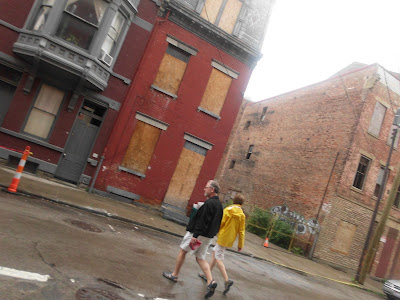 It’s a sad state to see so many buildings boarded up. There’s a vote going on with the National Trust for Historic Preservation and OTR is in the running. There’s $25,000 at stake! All you have to enter is an email and a zipcode and you can vote. The tour folks said that OTR will use the money to help save buildings from being torn down…I voted and seriously – it took three minutes total – take the time and vote! 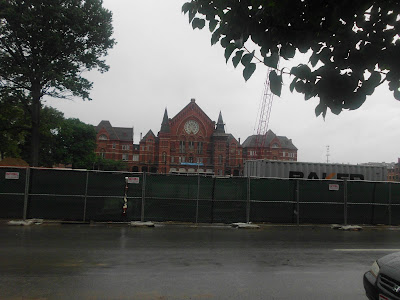 We were coming up to Music Hall and Washington Park. Washington Park is currently a big hole in the ground because they’re renovating and adding a parking garage. This park has been the center of a lot of bad behavior – here’s hoping the renovations make a new healthy beginning for the area! 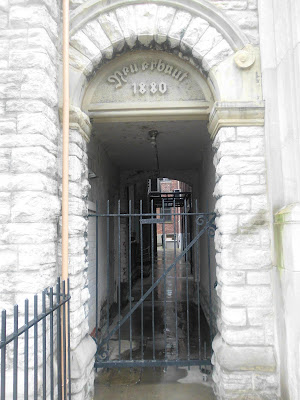 This pic is for my sister – she’s always taking pictures of doors and doorways. This one’s for you Edith! 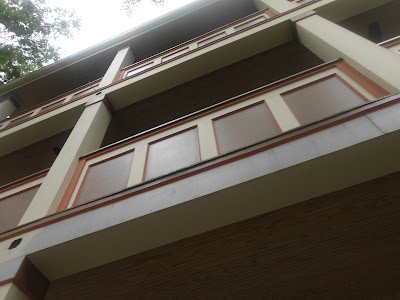 Here’s a building that’s going to be open soon with new condos – it seems to have an “old” look but will be updated – which is good for the area. 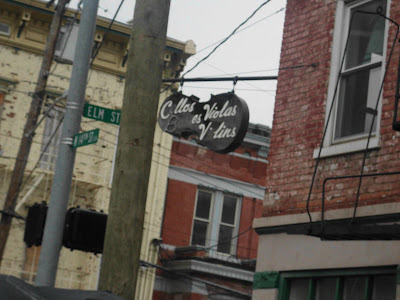 While my sister likes doors, I like signs. I love old signs (I sound like the guys from @americanpicker). A violin shop in the middle of all this – nice. 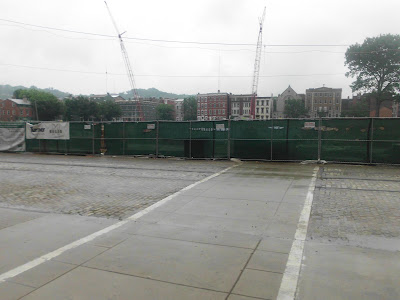 So here’s Washington Park – and while I didn’t take notes on all the historical stories we heard – I do remember a bit of it. This park was a temporary burial spot for soldiers during the Civil War. They would place the bodies here before they would take them up to Spring Grove for their official burial. And – when digging up Washington Park for the renovations – they found 63 bodies! They presumed they were soldiers because of where they found them in the park. Cuh-razy!!!! 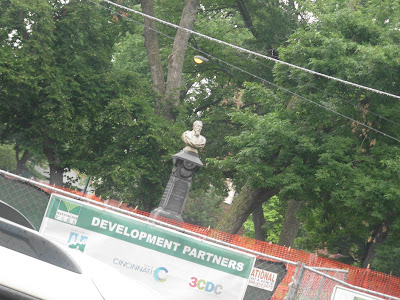 Here’s a bust of someone – Lytle maybe? Yeah the same one as Lytle Tunnel. I could be wrong on the name of the guy. I really should have taken notes. But on the tour – we heard a whole story about this guy! 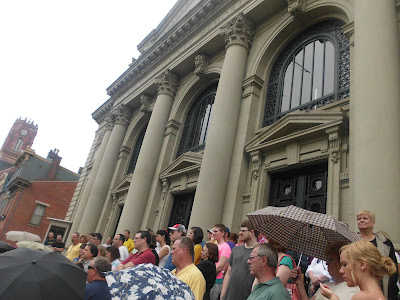 And this is Memorial Hall – the city was going to tear down this building! Then some folks got together and put forth an effort to save it. Now they have concerts and other gatherings – heck you can even get married here! 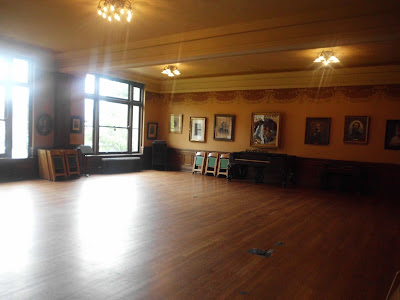 They’ve restored it and have historic Cincinnati figures around the building. Also Mr. Hotness George Clooney filmed some of the Ides of March here. Even he was shocked at how something this cool is so hidden! 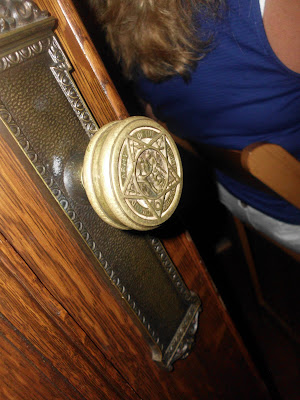 This is where I should have taken notes – these doorknobs are really unique. Some group in the Civil War days had this building and most of the knobs like these are now in museums. This is one of the few spots where they’re still on the doors. Want to know more – go on the tour! 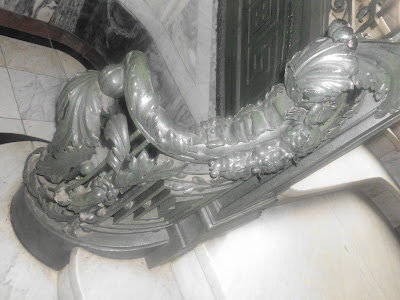 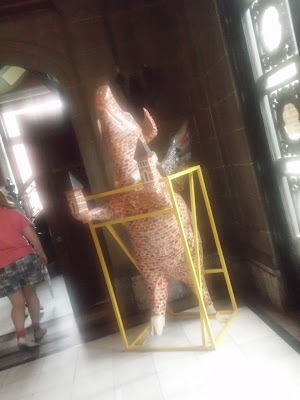 And a flying pig! 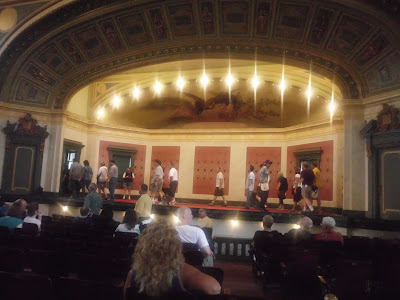 We were allowed to walk on stage and see the auditorium from that point of view. It will be interesting to see the building in the movie this summer/fall. George told the lady from the preservation society, “You’re going to love the movie – I made this place look amazing!” Can’t wait George! 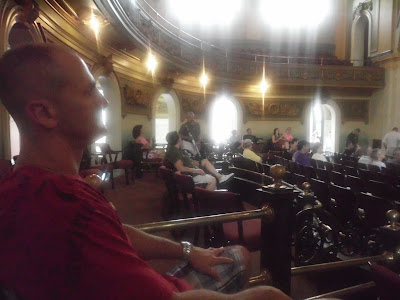 Larry and I decided to be fancy and sit in the box seats…more leg room. 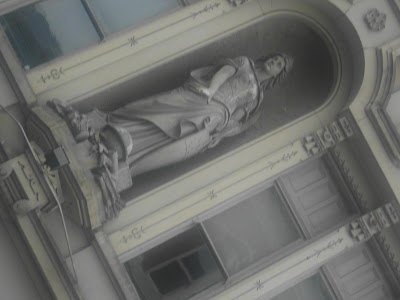 We came across this beauty as we were walking towards the Emery Theatre. Again – just some beautiful stuff walking through neighborhoods. It’s a shame that architecture isn’t like this today. 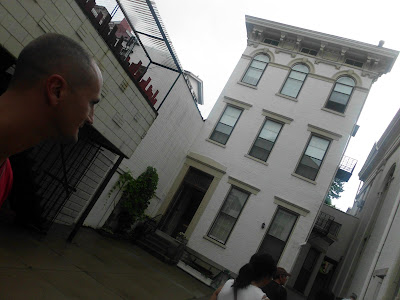 And last stop on our tour was Old St. Mary’s Church. This was a really pretty courtyard tucked away next to the entrance.

Also a side note of fun – while walking to this site – one of the tour guides came up to me and asked if I was the food blogger (I had mentioned it to another guide when talking about the vote). He said a friend of his is a huge fan of Food Hussy!!! His friend had sent him my blog on a number of occasions and he wondered if he could call his friend and have me talk to him. I was cracking up – a real “celebrity” moment! He even looked at Larry and said, “Oh is THIS the hubby?” I called and left a message for him – so if you’re out there – post a message here and let me know if you got my message! (I think his name was Rich – can’t remember – so much information that day.) 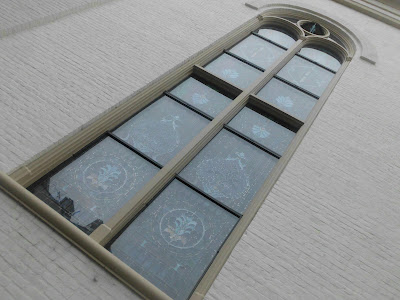 The stained glass was amazing! We learned a lot about the German heritage of the city. And that there used to be nearly 50,000 people living in OTR and now there’s just about 6,000. Can you fathom that?! 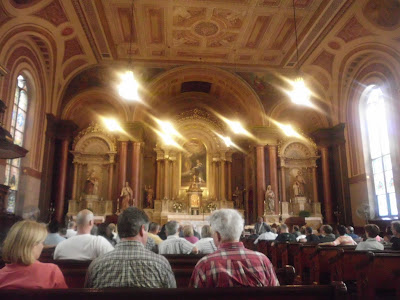 Inside – wow. This is a church! Stunning.
Why Should You Go? If you – or someone you love – likes history – it’s a must-see tour. We learned a lot while walking through OTR. We had a group of about 80-90 people and it was really enjoyable. American Legacy Tours does a great job – they’re very knowledgeable and fun & interesting guys!
And again – vote for OTR to win the $25,000!!! The voting is very close and OTR keeps flip-flopping between the first three spots – so every vote counts!!!!
Previous Post: « Mediocre Mexican
Next Post: Old People Dining (But It’s Kinda Good) »