In our stay-cation we tried to find all the touristy things that people take their visitors on – our niece Cat might be from Cincinnati but she’s been away for 10 years – we have to show her the town all over again! One of the attractions I hear about constantly is the Ride the Ducks in Newport. 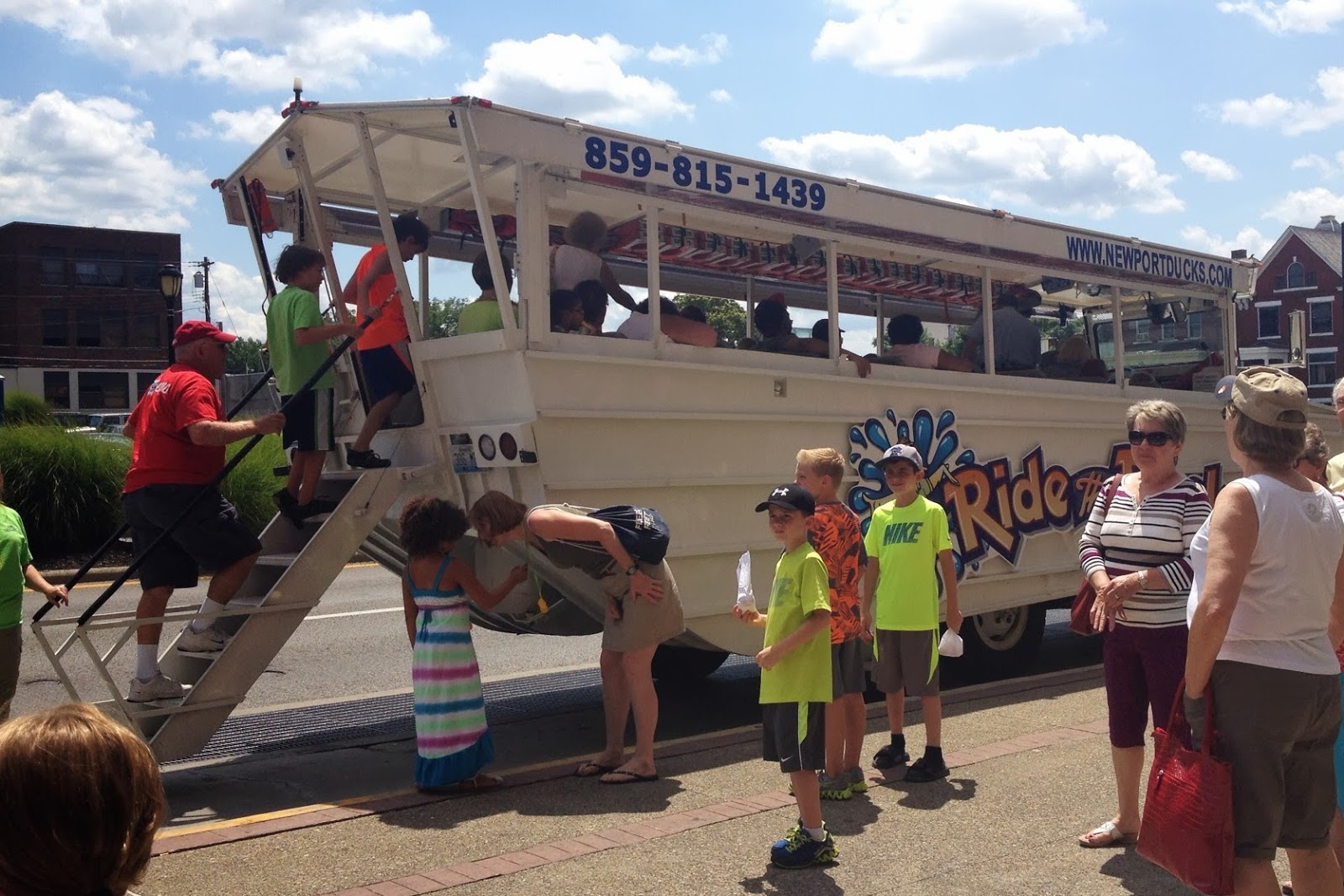 Tickets are $17/$12 depending on age and you can purchase them online or at the outdoor kiosk at Newport on the Levee (outside Mitchell’s near the Aquarium). They take a photo beforehand and hand you a duck bill quacker to wear during the ride (oh yeah baby). 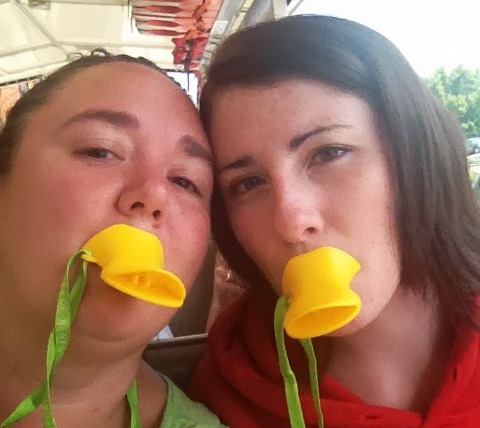 That’s the one thing I love about this kid – she had a great attitude and was okay with looking a little silly. Surprisingly enough – my husband has enjoyed the quacker the most – mainly because it drives the dogs INSANE! 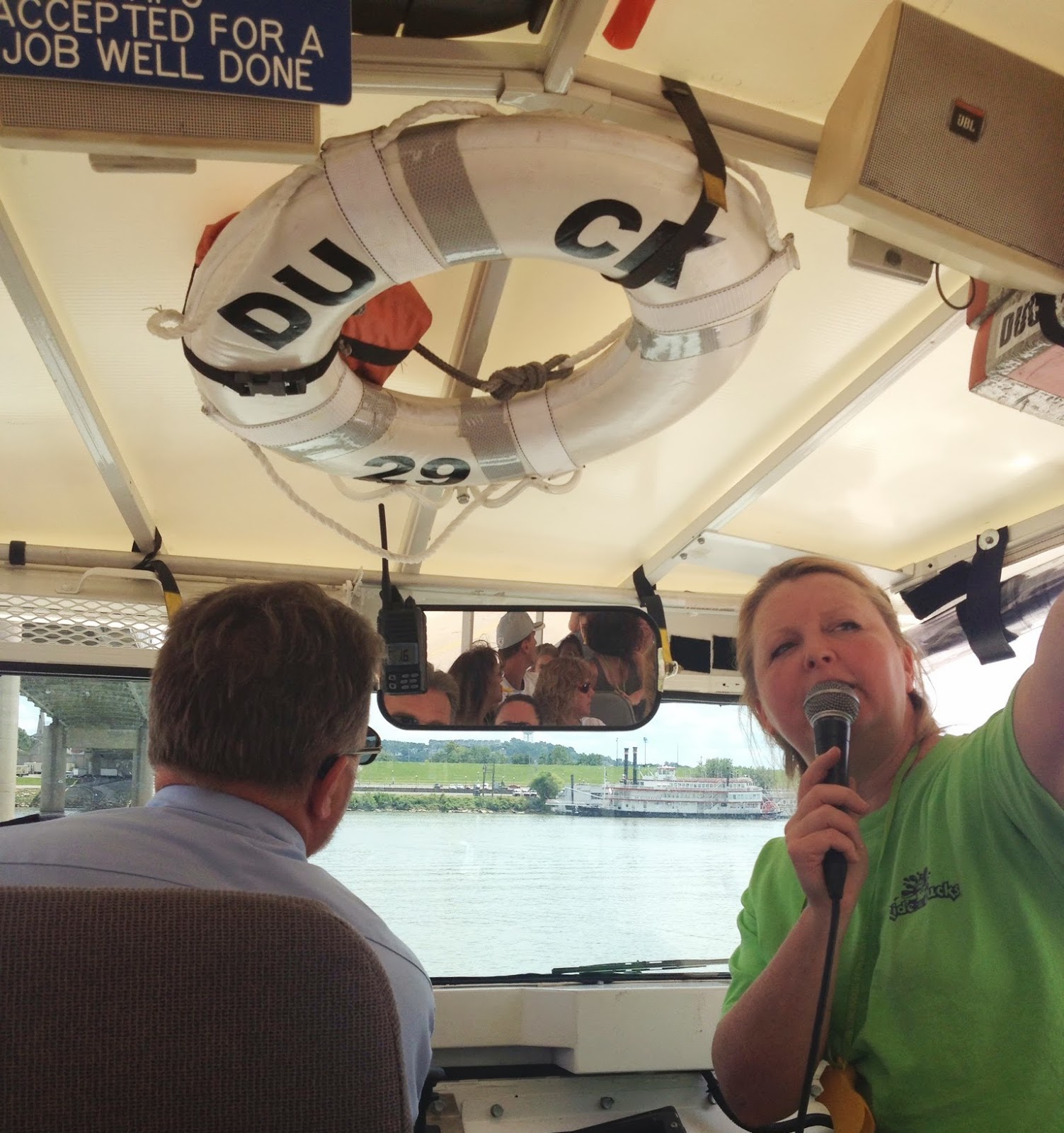 Our tour guide was great – she has a ton of energy and knows lots of fun facts about the city. She was full of knowledge and really got the group going.

The main audience for this is parents with younger children (10 and under) but we rode with a 17 year old and still had fun. 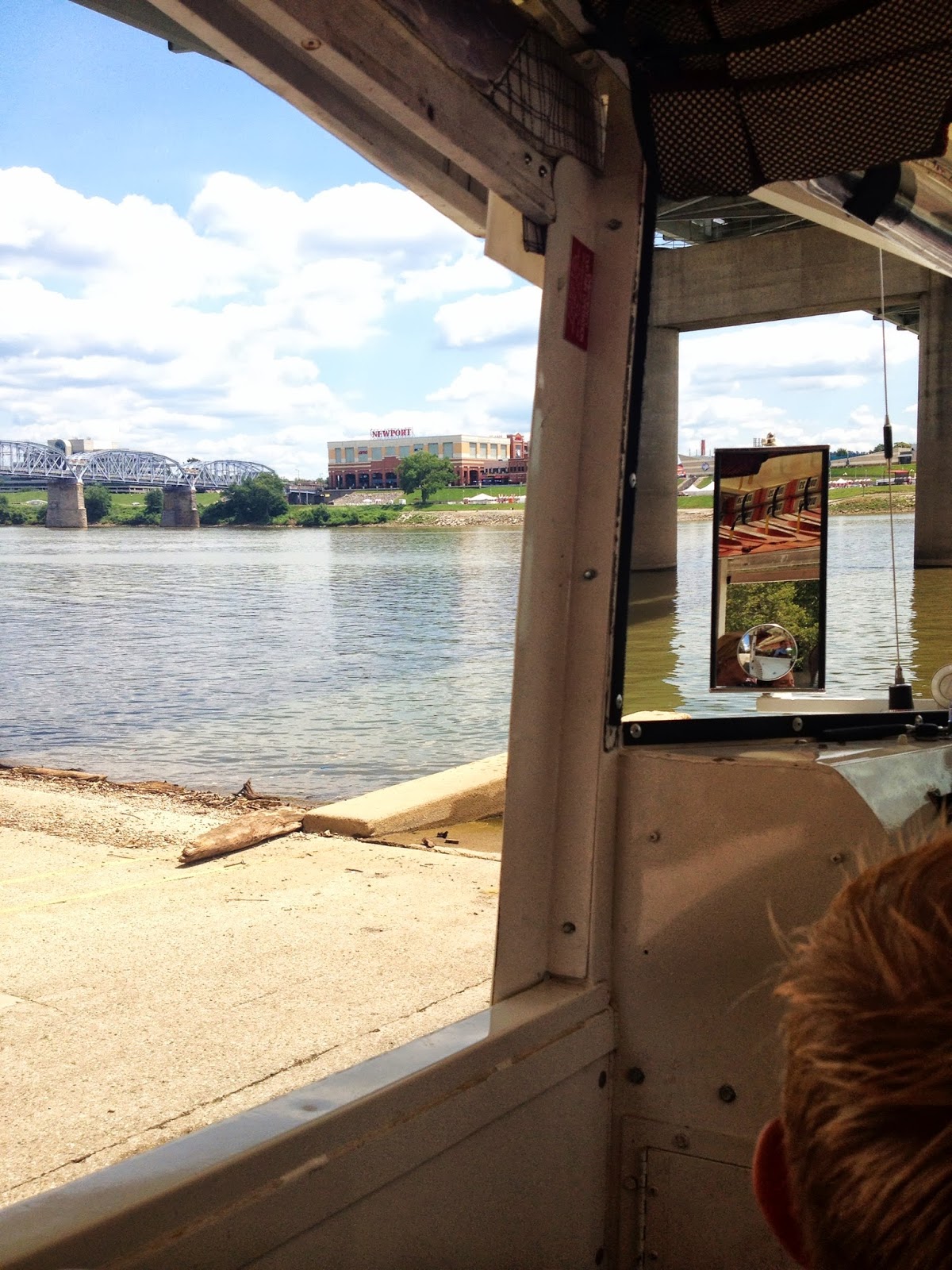 And the big part of the ride is the fact that this vehicle you’re riding on – goes right into the water! After a short drive across the bridge – you head into the Ohio River. 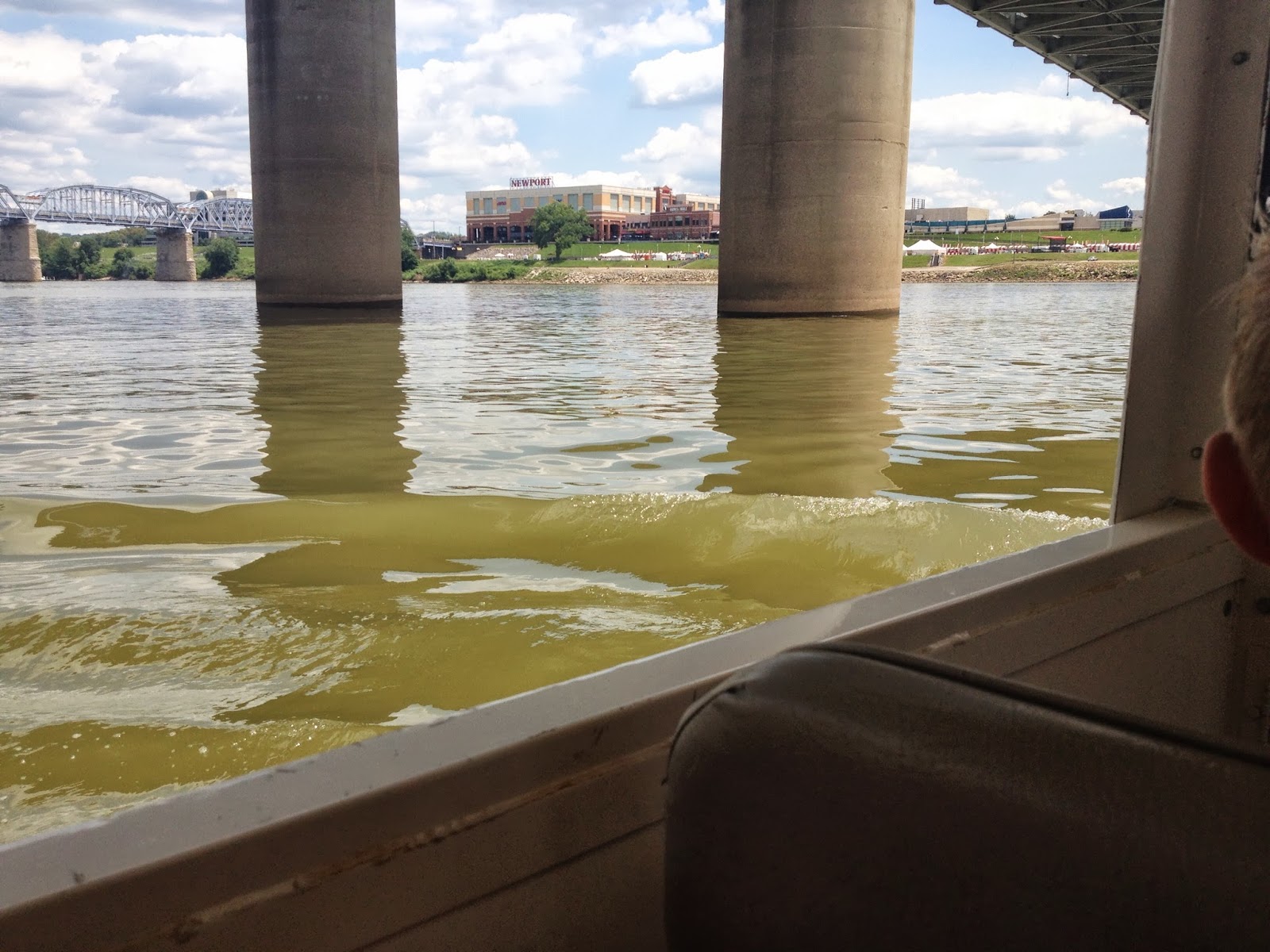 And we made it! I didn’t even think about getting wet – but they did tell us – if you want to get wet (or you want to avoid it) the back row is really the only casualty. The folks on our group stayed dry though.

We did find out – although you can’t tell it from this photo – that the Ohio is one of the cleanest rivers! Still not going to swim in it though.

We also had the fortune of driving by the American Queen – which is a floating hotel. They come through Cincinnati a couple times/ year and were docked here preparing for a trip from Cincinnati to St. Louis (one way). My husband commented how he would love to go on a trip like this sometime – but I think we’d likely start with a 3-day rather than 9 day.

Seriously – is he not the cutest thing ever? He was a little young and I don’t think got much out of it – I would say the sweet spot is 4-7 year olds. They quack away but can still listen to the guide. 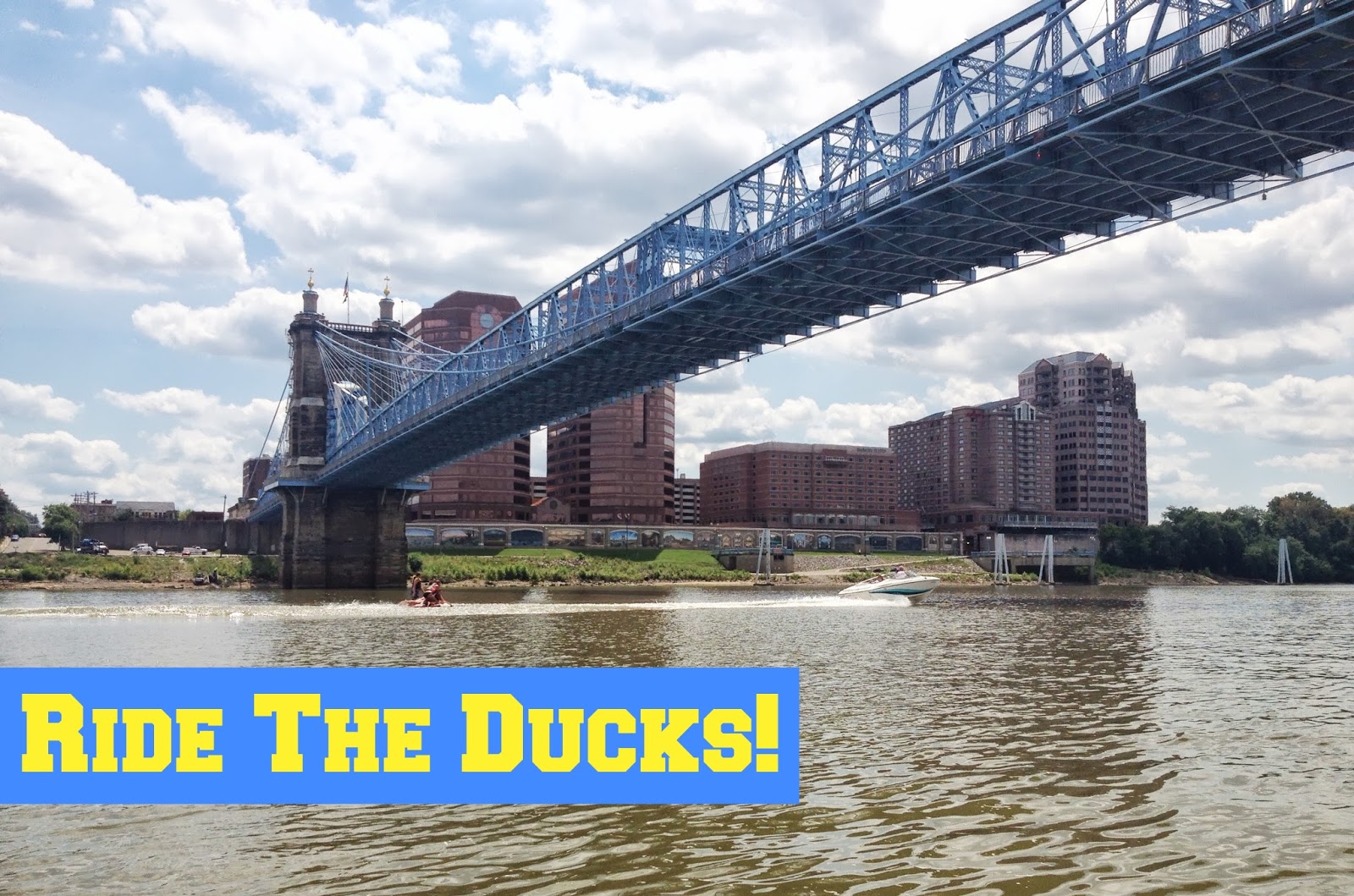 You also get great views of the city. The Roebling bridge is so beautiful and you don’t get to see it from this vantage point very often. 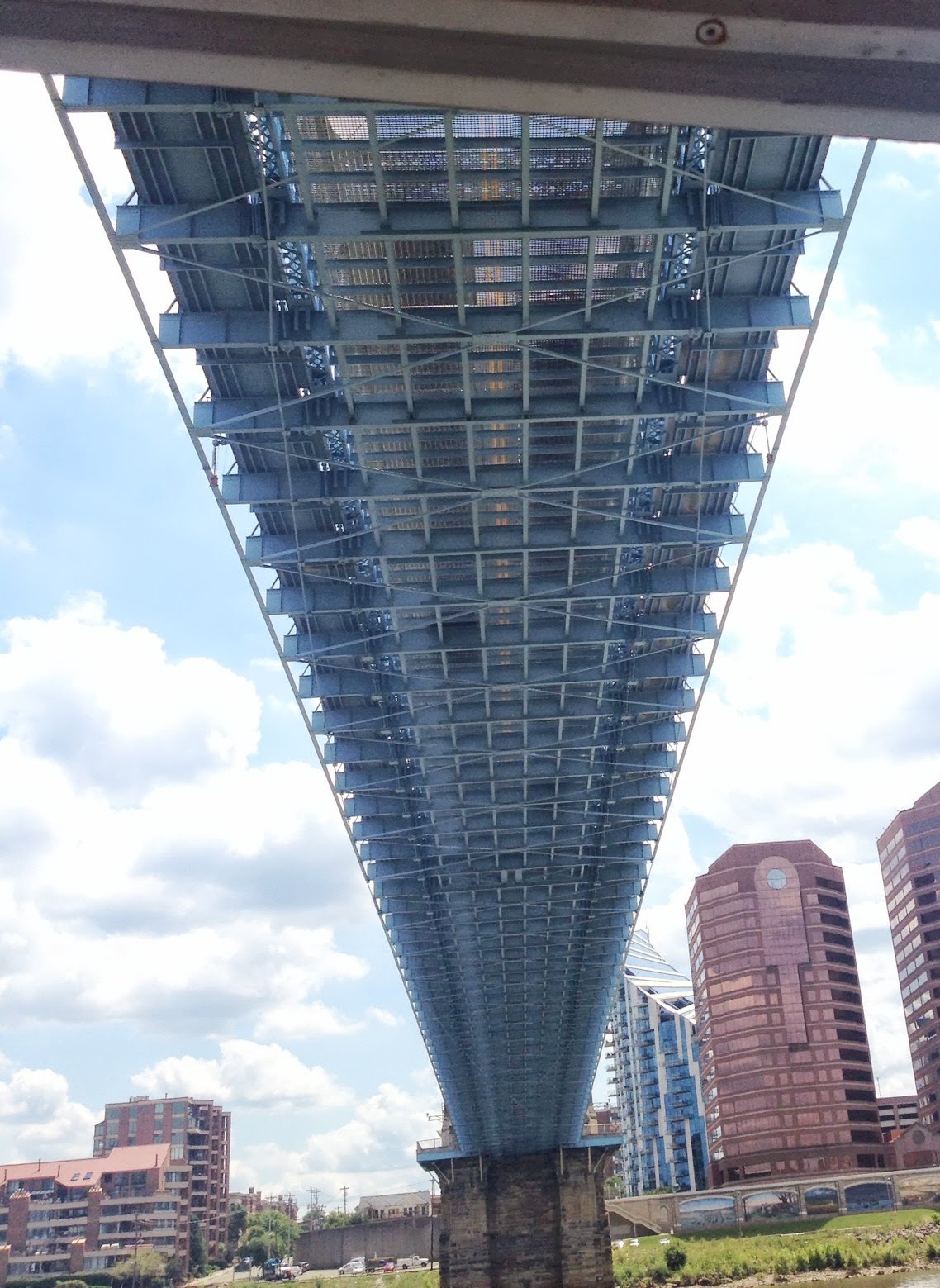 As in going under it while cars are whizzing by above you! A little freaky to say the least… 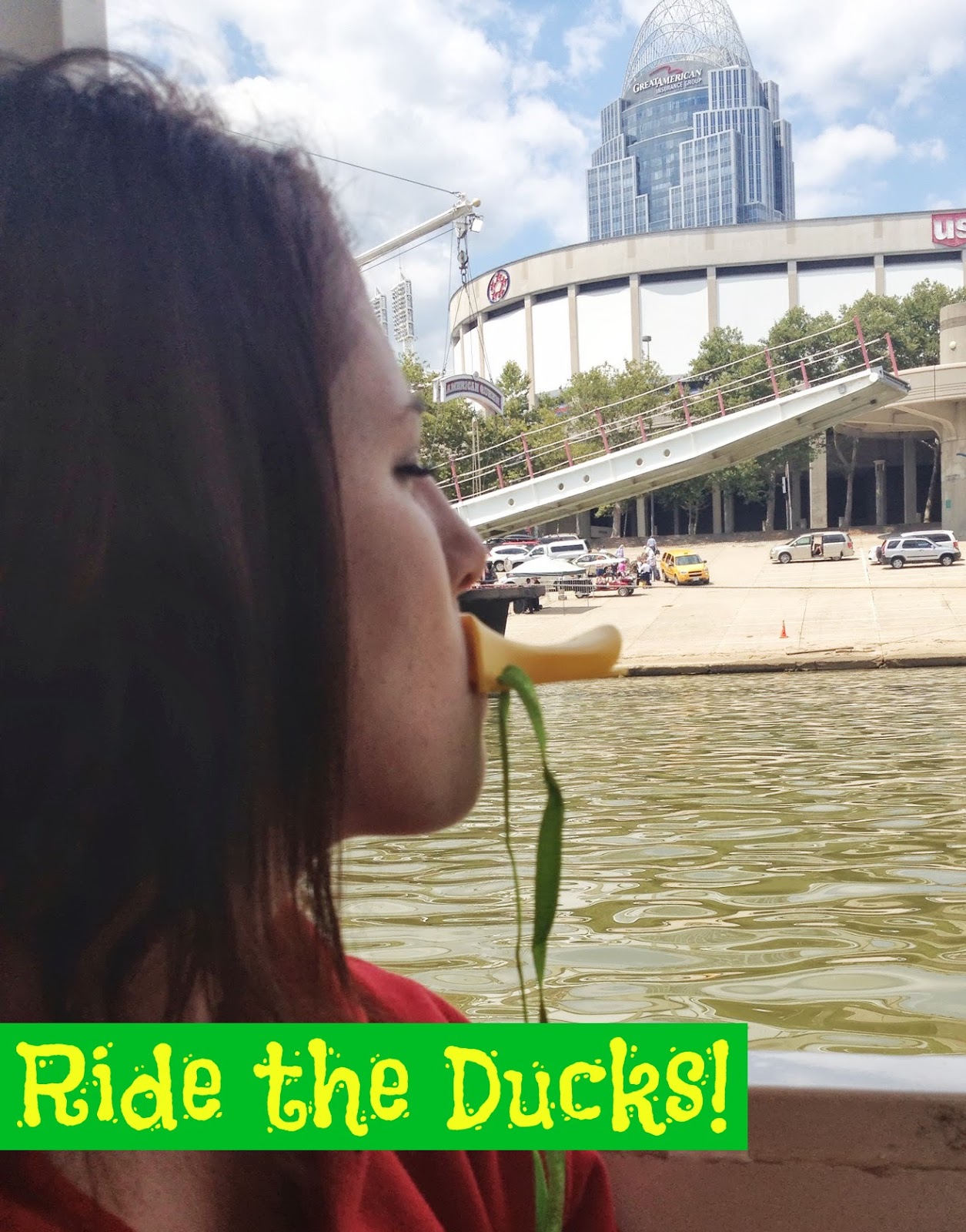 Cat got into the spirit and was quacking by the end – if only just to quack louder than the kids around her. 🙂 We also drove by the Banks – so much work has been done there. We also spotted some giant “porch swings” – the hubby and I both said we need to go find those! 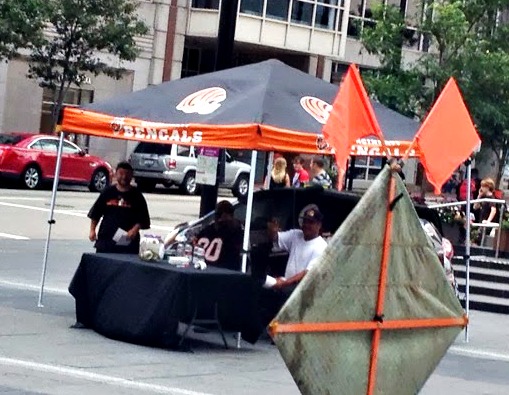 And you never know who you’ll see in the ‘Nati – driving by Fountain Square we found Ickey Woods! He’s got a great foundation named after his late son. Ickey saw my husband’s Indianapolis Colts hat and called him out as we were driving by! Larry got a kick out of that. 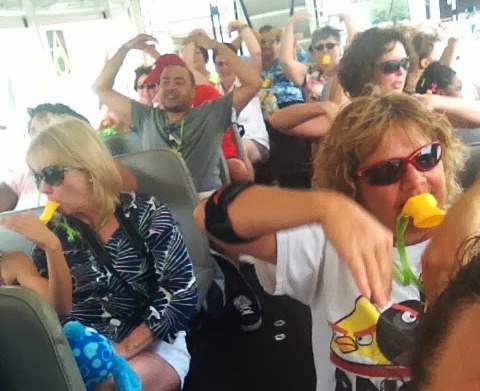 And I mentioned that our tour guide got us going and had a lot of energy – so much so that she got almost the entire boat to do the YMCA. Oye vay. I’m sure everyone under 18 on the boat thought the adults had lost their damn minds!

Another note of trivia – do you see any similarity between the blue building on the left and the blue bridge? Turns out the architect used the angle of the bridge as the inspiration for the building!

And – we learned that the copper on the Freedom Center will age to be the same color blue as the building and the bridge! Pretty cool planning there. 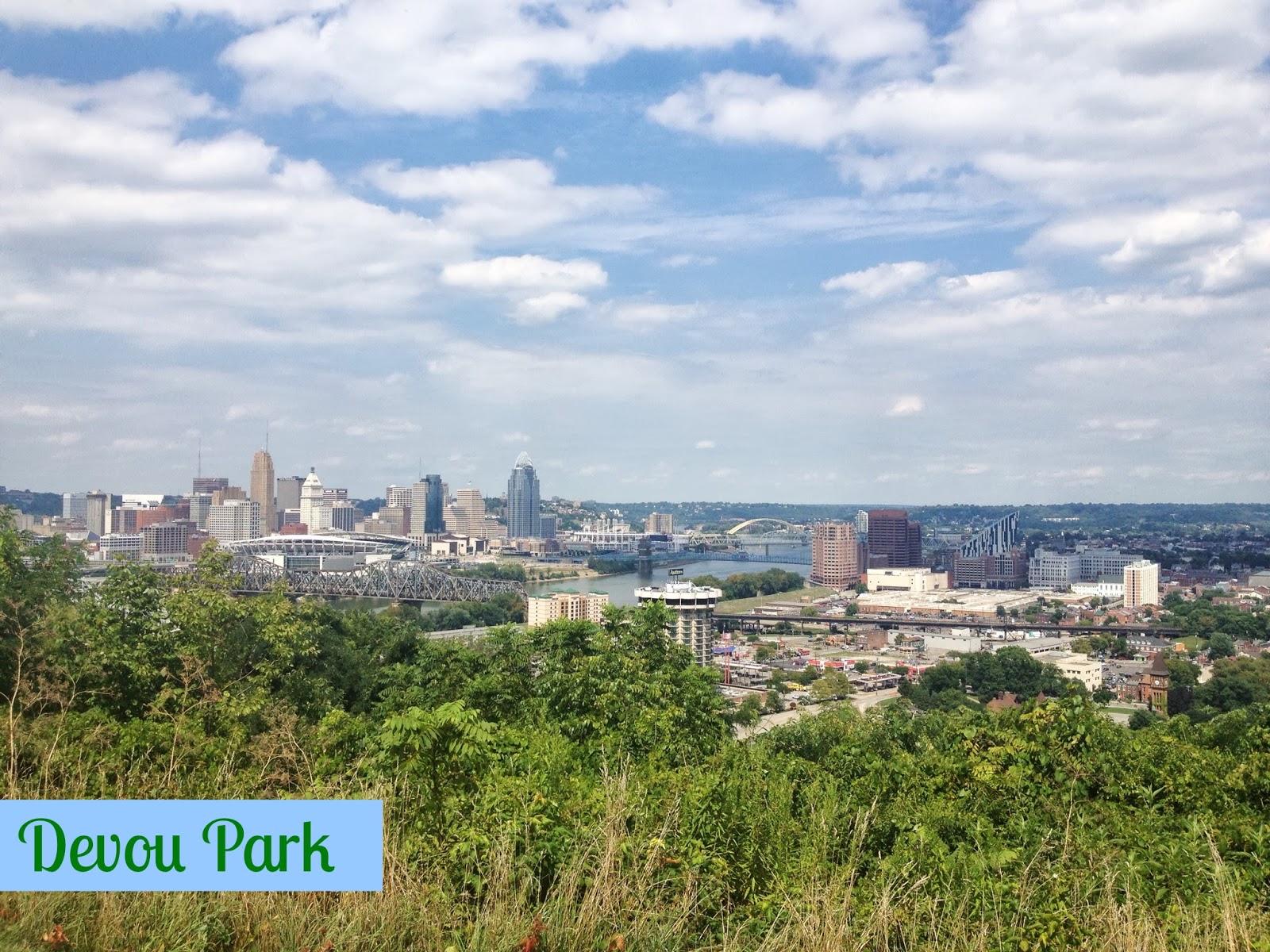 After the 45 minute Duck Boat, we decided to show Cat the best view of the city in Devou Park. Such a great picture spot for the whole city.

Why Should You Go? I think the Duck Boat is definitely a good time and you learn a little trivia along the way – which adds to the fun. It is probably best enjoyed by folks with younger kids. They did say that they rarely get Cincinnati natives on the boat – and I have to say – I’m a little surprised. I would definitely say that I bet every Cincinnatian would learn SOMETHING about the city on this tour!

* I was provided 3 tickets on the Ride the Ducks boat in exchange for this post but all opinions are completely my own. 🙂