I was really excited to be able to have dinner at Seasons 52 on the house recently! 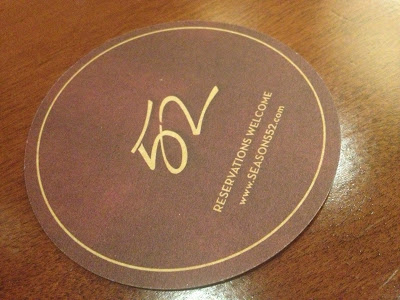 Seasons 52 is a new restaurant to Cincinnati living near Rookwood in the area that was taken over from Imminent Domain. It’s owned by Darden Restaurant which also owns Yard House, Red Lobster and more.
Their name comes from the fact that they change their menu every season and that they have unique fresh specials 52 weeks a year. I think that’s clever and all – but the real standout to me is that EVERYTHING on the menu is under 475 calories. THAT is almost shocking… 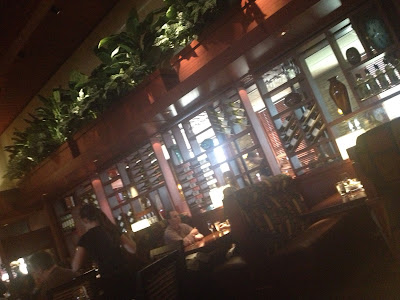 Inside, it has the same “look” as quite a few places in town. Big, grandiose, lots of cherry-colored wood and wine everywhere. 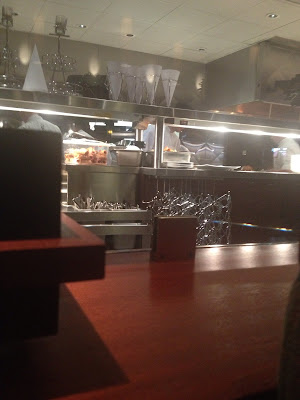 We were seated at a booth very near their somewhat open kitchen. I love an open kitchen – they also have a Chef’s Table – which is something I have ALWAYS wanted to try. (hint hint husband – since I have a monumental birthday this year) 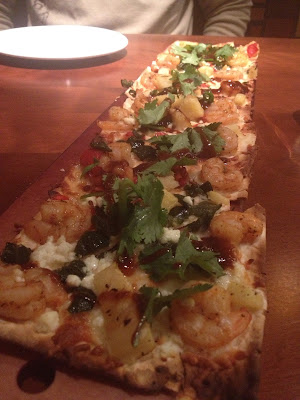 Spicy Chipotle Shrimp Flatbread – grilled pineapple, feta cheese, roasted poblano peppers
We decided to have a couple of apps for starters – and we definitely had leftovers for a couple of days. This flatbread was wonderful! Crispy and spicy – more spicy than I thought – but not too much. It had a smoky flavor to the sauce – but the pineapple cooled it off. They even have special flatbread boxes to fit the length! 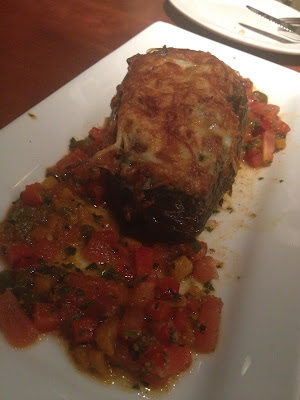 Then I went for the Chile Relleno – I think I must have been hallucinating because somehow I missed the Goat Cheese Ravioli (how the hell?)! We had been talking about chile rellenos at work so I thought I should try one.

Oddly enough – this was not as spicy as the flatbread even though spicy is in the name. This was good and I thought the chicken was a unique stuffing for it. I don’t know that I would order it again though. It was fine – just not outstanding (and not enough goat cheese). 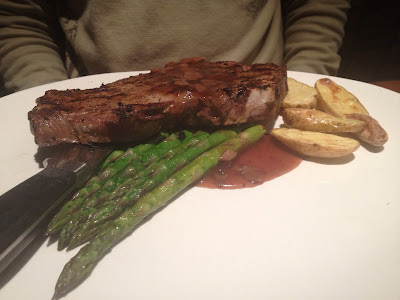 Piedmontese All-Natural Bone-In Strip Steak, 11 oz. roasted asparagus, cremini mushrooms, roasted potatoes
Larry went for the 11 oz. strip – and seriously – 475 calories! The thing is – you see how they do it – generous with the meat & veggies, minimal on the starch – but hey it works! The steak was cooked appropriately and it was tasty. Larry donated the asparagus to me and it was fine – maybe a little under-cooked. The potatoes were good but fairly plain. All in all though – such a filling entree for 475 calories!
(Obviously – have 3-4 things at 475 calories blows the “healthy” aspect of it – but hey – it was on the house and we were splurging!) 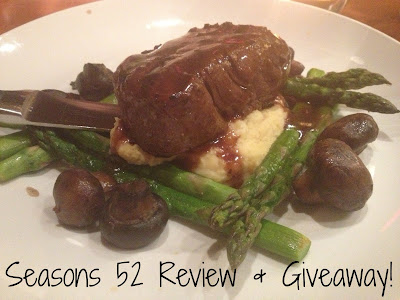 I went for the Filet – medium rare. It was perfect. It’s so funny – I never really know the difference in cuts of meat – but Larry’s take was half the thickness of mine – so medium rare on his seemed more like medium to me. Medium rare in mine – seemed more like rare – but that’s fine by me!
The sides were fine – but nothing to write home about – I’d prefer sliced mushrooms and the asparagus cooked a little more. 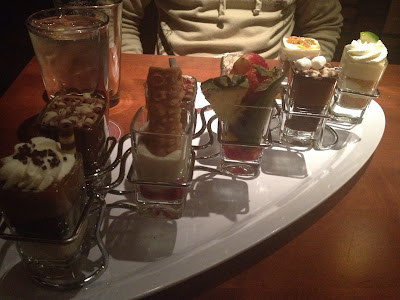 Then dessert – they have an option for every pallette – fruit, pecan pie, key lime, chocolate, etc… and only $2.50! 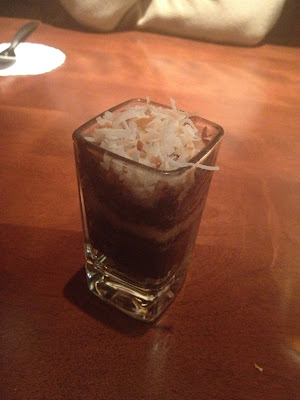 I went for the German Chocolate – and it was delicious! This shot glass of goodness was perfect! I didn’t need another bite (okay – I wanted more – but didn’t NEED more). The cake was moist – it had that awesome GC frosting and there was just the right amount of coconut. I loved it! 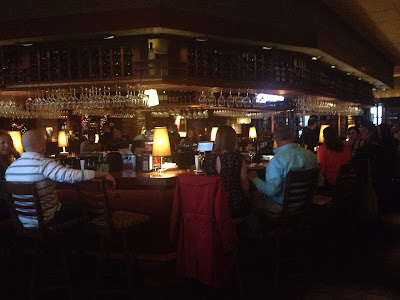 Lastly, the bar is very pretty and they had live music. We were on the opposite side of the restaurant but could still hear the music just enough – it was nice.

Why Should You Go? It’s pretty, it’s nice and the food is really good! While I wasn’t amazed & astounded by everything – I definitely REALLY liked the food enough that I want to go back. That’s a pretty big statement – I have this burning desire to try so many places – it’s rare I go back to a “special occasion” place. This is worth the trip – I think moreso than it’s sister restaurant Yard House (unless you’re going for the beer instead of the food).