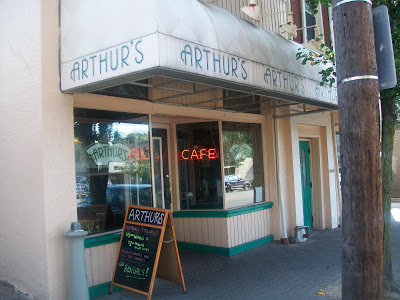 If you don’t know where it is – it’s in Hyde Park Square next to Echo. 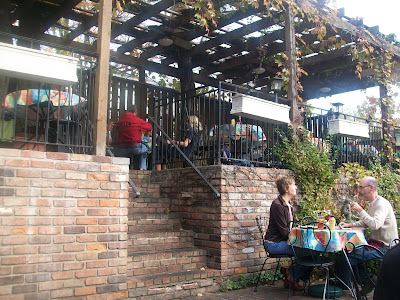 I’d heard the patio was great and luckily it was a nice day when we went. I highly recommend it – inside is so dark! Outside it’s heaven! 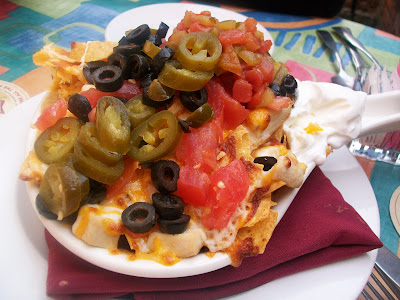 Larry was starving so he wanted an app – we got chicken nachos ($8). These were delish! The chips and cheese were baked so there was lots of crunchy and melty. The jalapenos had the seeds out so they were spicy but not burn your face off. It was just a platter of goodness! We totally thought we wouldn’t eat them all…we were wrong. 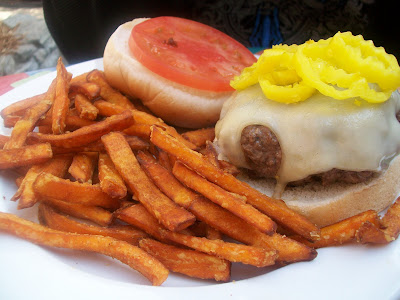 While they have other menu items – we had to try the burgers. Plus Sun-Tues they have burger madness which is $7 for a burger & fries (up to 6 toppings). Larry went for swiss and banana peppers – he’s a simple burger guy. We both got the sweet potato fries. This was a good burger – it was cooked perfectly (we asked for Medium Rare) and tasty. The toppings were fresh which is always appreciated. The bun wasn’t anything special (in thinking of other favorite burgers) but he liked the burger. 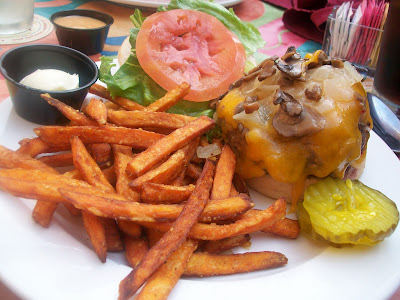 I got mushrooms, onions and cheddar cheese – load me up! It was really good. Because of the nachos – we weren’t eating many of the fries – but they were tasty.

Why Should You Go? The burgers are really good and the patio is great – plus $7 is a great price for burger & fries of this caliber. And they have $4 burger & fries for lunch Wed-Fri (wish I worked closer!). The patio is definitely the place to sit – I think we’ll become regulars once the weather is nice again!

And in the world of polling – you all said Pit to Plate was the best BBQ in town – so it just got added to my wish list! I’ll try and get there to review in the next week or so…