I’ve been drooling and dreaming about this thing called a “raclette” for a couple of years on Facebook. It’s a big ol’ wheel of cheese that’s melted and then scraped off on some food. Officially it’s a semi-hard cow’s milk cheese – they cut the wheel – throw it under some heat to melt the top layer – then scrape the melty goodness on your food.
So I got super excited to find out that someplace in Cincinnati is finally doing it! 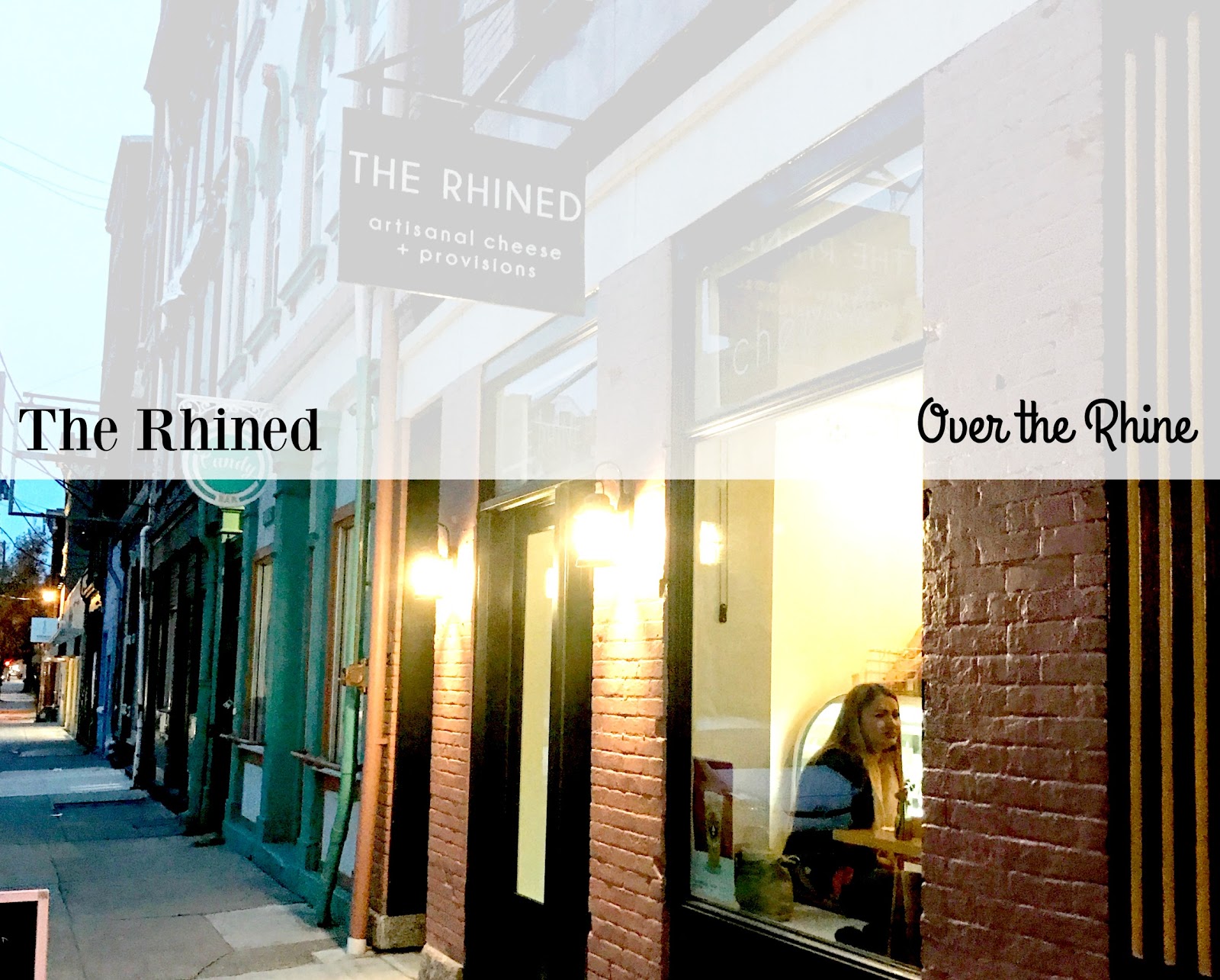 The Rhined is a wine & cheese shop in OTR across the street from Findlay Market and every Wednesday it’s Raclette night from 5-8pm (or until the cheese is gone). They have a patio but it’s not open now that it’s colder – so seats are at a PREMIUM. I would highly recommend getting there EARLY!! Like 430pm early – have a glass of wine and put your order in.. 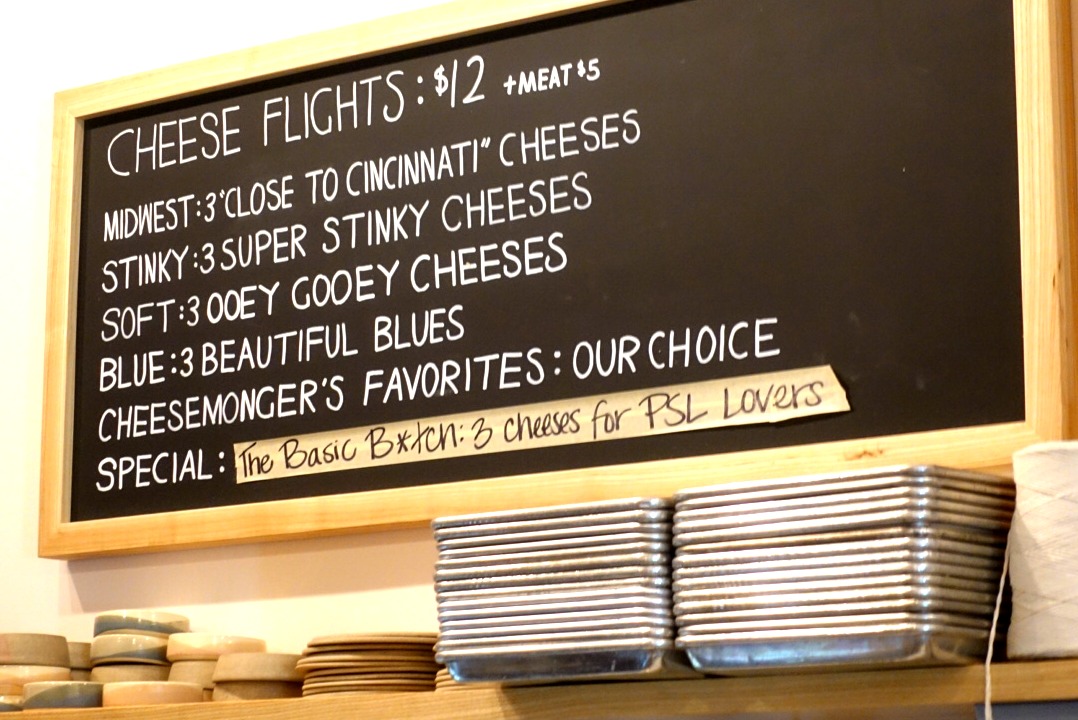 The Raclette is a specific menu – but they also have cheese and charcuterie flights as well as a few other menu items. The cheese flights sounded interesting – but we zeroed in on our choice very quickly.

You see – my friend Maria – well – she’s my Basic B!tch. It’s my joking nickname for her cuz she’s a millennial – such a millennial. She loves the PSL (pumpkin spice latte – bhaha) and everything hip. But no worries – she has PLENTY of nicknames for me I can’t really repeat here. Bhahaha 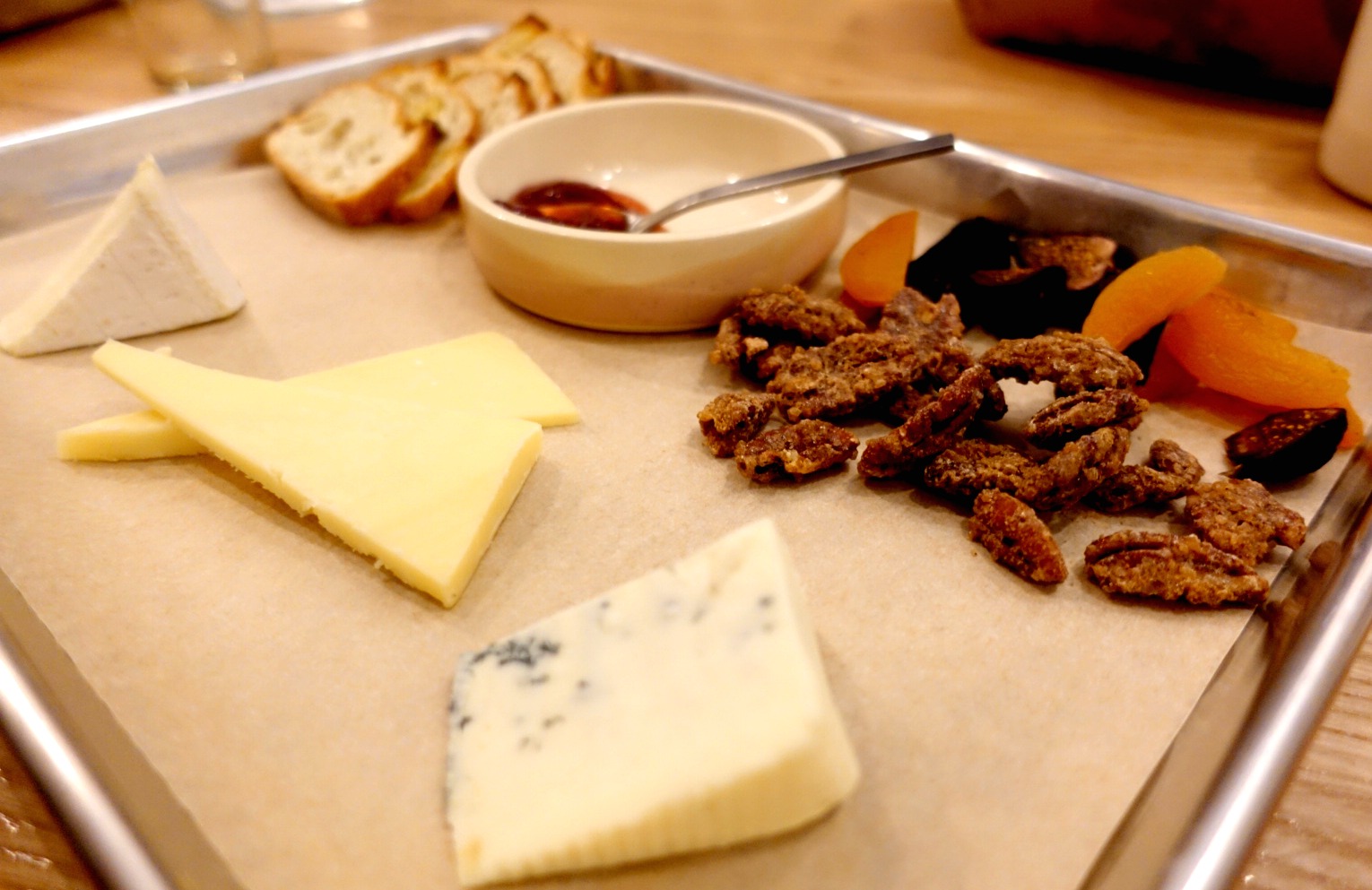 So we chose the Basic B!tch Flight ($12) – Basic cheeses for the PSL lovers! It came with a brie, cheddar and a bleu as well as a few crostinis, some candied pecans, dried fruit and a spoonful of jam.

The cheeses were pretty basic – the brie was very standard, the bleu was the stinky foot kind – so gross and the sharp white cheddar was great. The crostinis were a bit hard, the jam was really tasty and I loved the pecans – SUGAR NUTS!

My “beef” (so to speak) was with the cheese – the portion sizes were TINY! For a cheese tray – I expect more cheese – especially for $12! 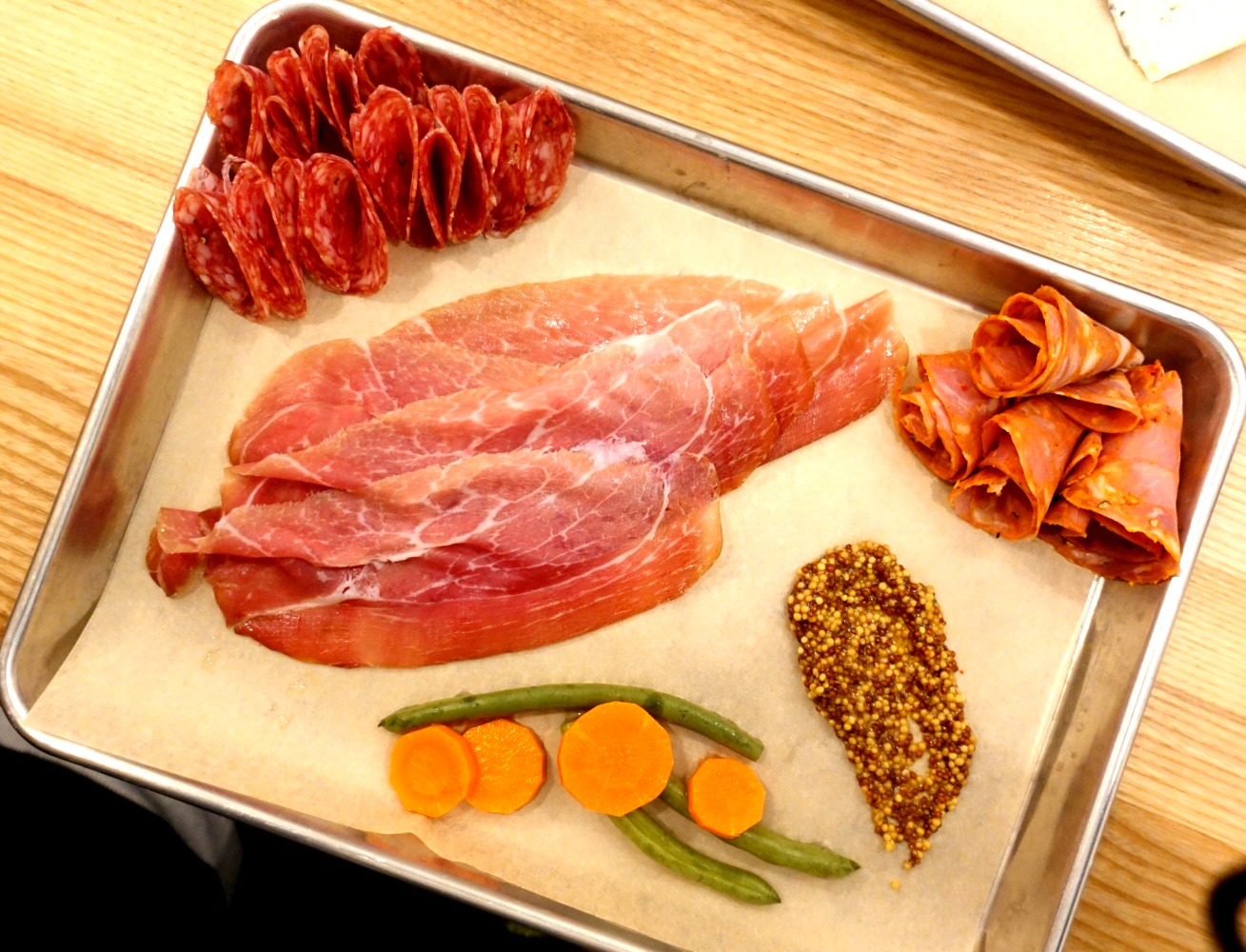 We also got a charcuterie tray ($16) – I saw a meat from Iowa on the list so wanted to make sure we tried that! So we had a soppressata from California, coppocolo from Indiana and a prosciutto from Iowa. It was also served with a schmear of mustard and a few pickled veggies.
The meat was really good – but I can’t imagine not having the cheese with it. This had a lot of the first two meats – but those are cheaper ($5 on own vs. $10 for the prosciutto). The veggies were sparse but then there was a ton of mustard – but no crackers. And if you look – there were only 6 crostinis on the cheese tray.
We liked the cheese & charcuterie trays but didn’t love them. I’d rather have a combo of both.

So this is the magical raclette in action! They heat up the cheese and scrape it onto your goodies. 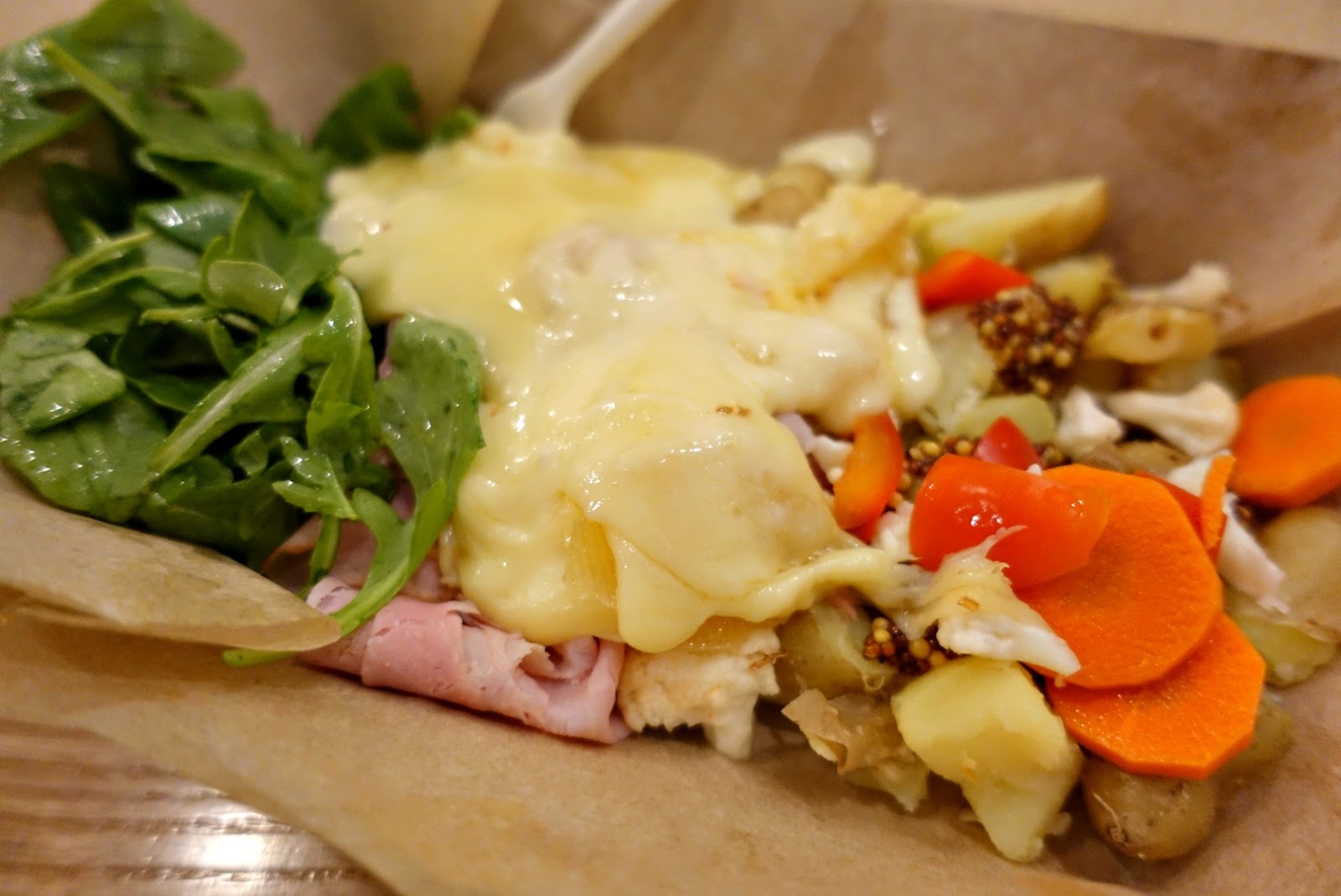 Traditionally raclette is served on potatoes, ham and pickled veggies so that’s what The Rhined does. The raclette special is $12.

The melted cheese is really tasty!! My favorite part of the raclette’s underbelly was the potatoes by far – they’re just boiled potatoes – but the cheese was a good pairing. The veggies are pickled, the ham is thin deli ham and then some lightly dressed greens. 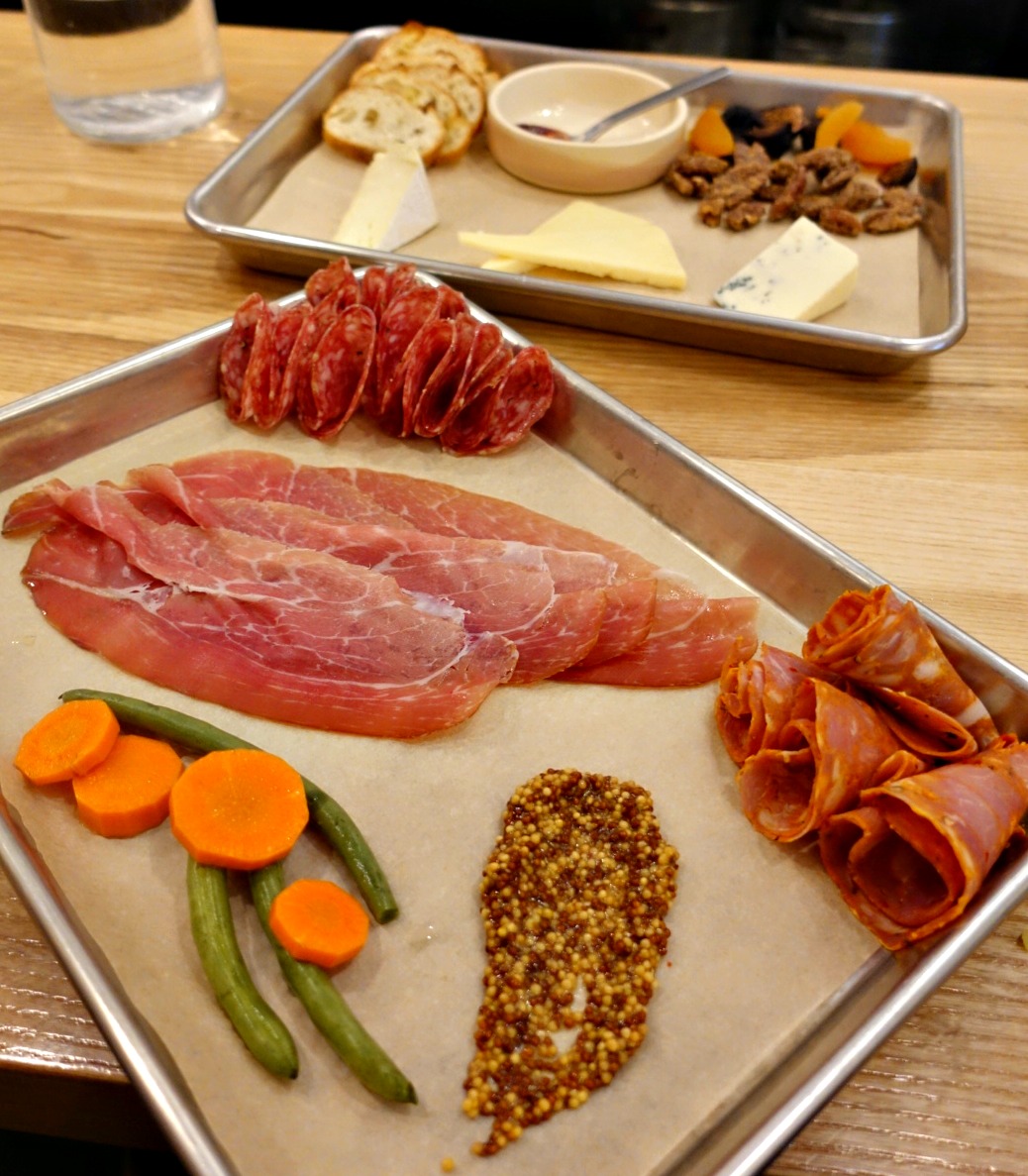 The serving size is pretty good on the raclette is pretty good. We had 3 of us and ordered 2 raclettes and the cheese & charcuterie tray. I also had a root beer and they each had a beer. Our bill was pretty steep – close to $70! 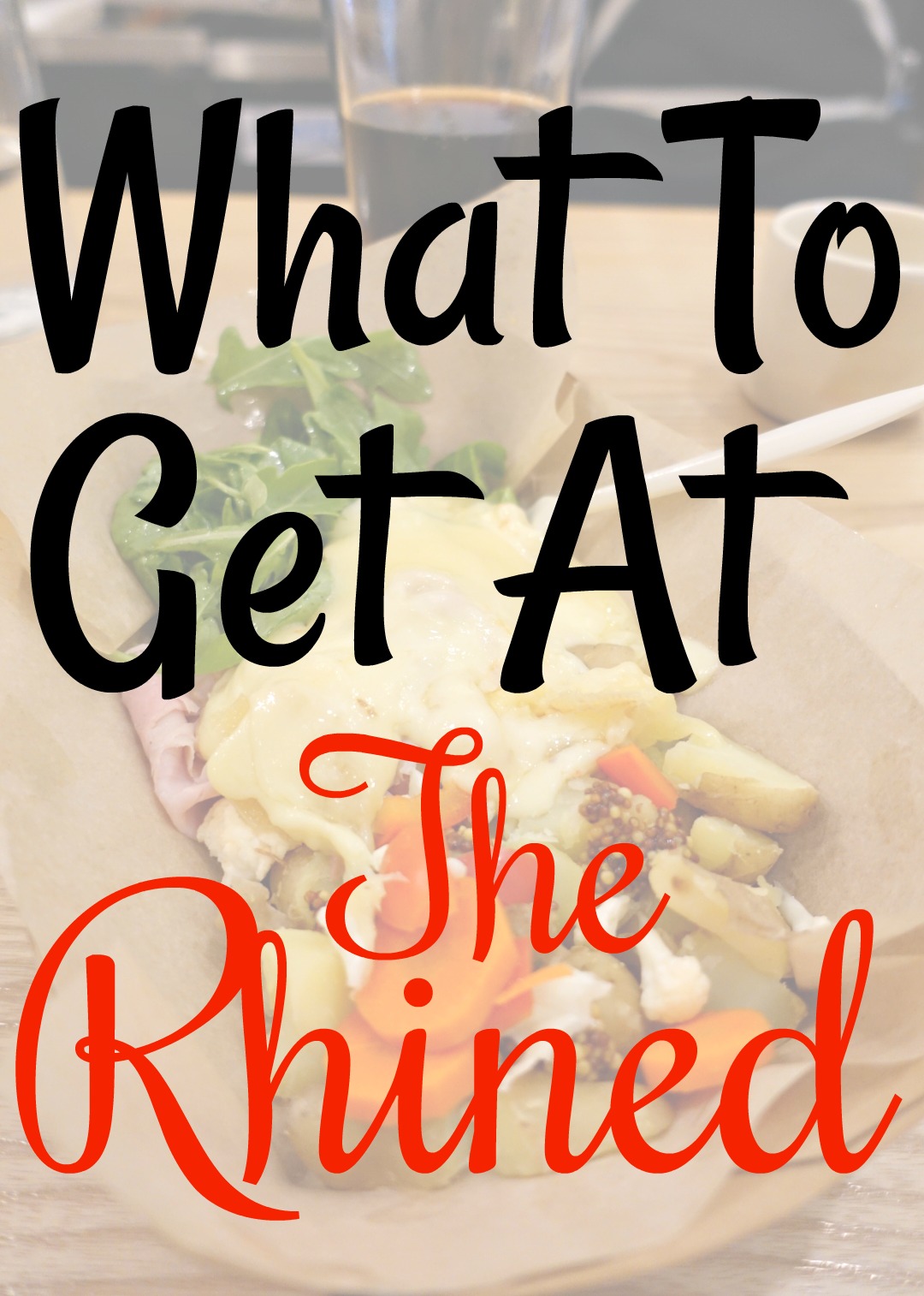 What Should You Get At The Rhined? Well – I would definitely go on Raclette night – but as I mentioned at the top of the post – GO EARLY!!!! We had to wait for 45 minutes to get two seats at the bar (there was 3 of us). On another visit, we would JUST order the raclette. The trays were fine but seemed a little pricey for what you got – especially the cheese tray. All in all though – very glad to have this finally in Cincinnati! And if you’re looking for parking – street parking is scarce around there so we just parked in the Findlay Market lot – it was 50 cents for 2 hours.